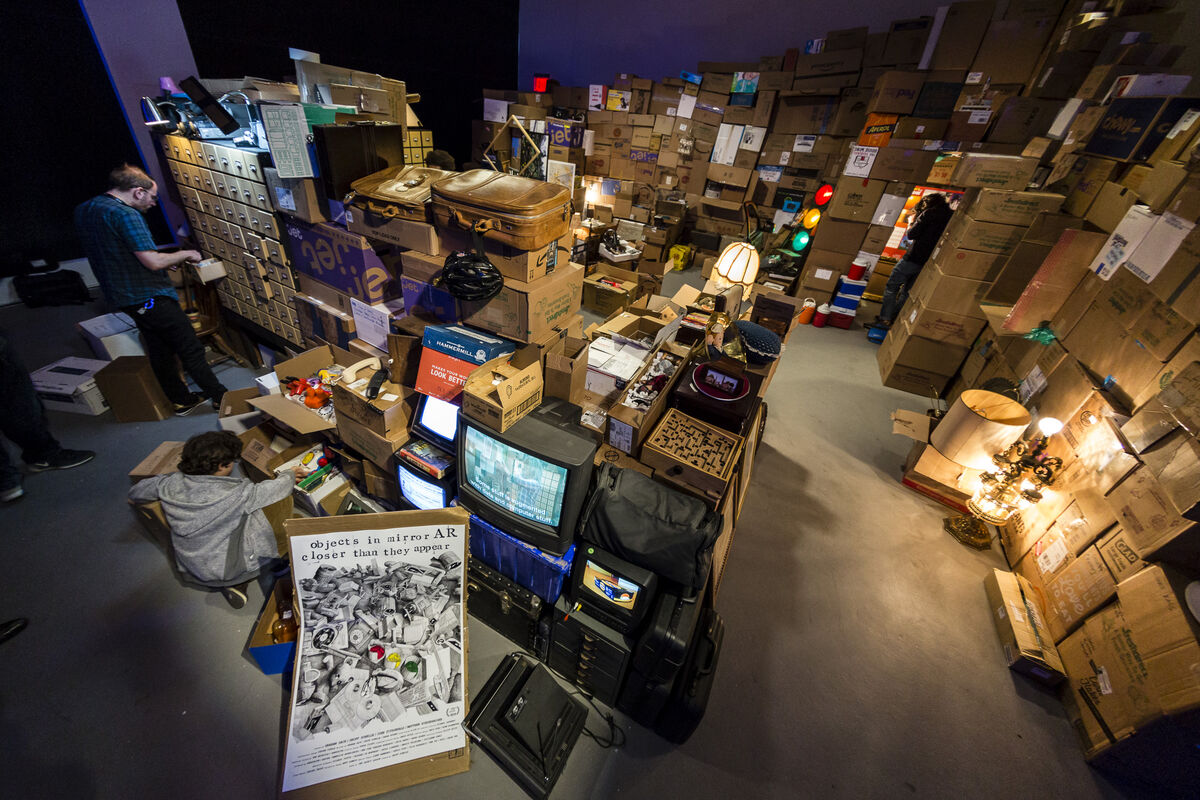 “Open Me.” The words are scrawled on the cover of a brown paper notebook. I oblige. The following page tells me to empty my pockets, lay out everything I’ve found, and consider the objects and their personal value. “It is like a tiny portrait,” the notebook reads. “A portrait of you—in this immediate moment. A portrait painted in your stuff!” I discover my pockets to be fairly empty. Just a scratched up iPhone. A modern-day portrait.
Welcome to the philosophical playground that is Objects in Mirror AR Closer Than They Appear, which premiered at the Tribeca Film Festival’s “Storyscapes” in April and will be reprised at the New York Theatre Workshop from May 9th through the 19th. Of the 31 immersive media pieces at the festival, it was the only one that gave participants physical agency to wander through a real-world environment and interact with objects enhanced by augmented reality (AR)—an impressive technical and social experiment, given the nascent stage of both AR hardware and software.
The installation builds upon the hit solo performance-cum-installation The Object Lesson by Geoff Sobelle, a self-proclaimed absurdist who’s been known to make beds in underwater tanks as a form of performance art. The original show turned the New York Theatre Workshop into a giant storage facility where audiences sifted through clutter, attempting to decipher meaning from the everyday flotsam and jetsam. This next iteration of the piece throws technology into the mix: Sobelle partnered with Graham Sack, John Fitzgerald, and Matthew Niederhauser of Sensorium, an experiential studio that works with virtual and augmented reality.
At the entrance of the 600-square-foot installation is a wall of old TVs and VCRs playing a mashup of footage from the 1990s. A grinning Mr. T appears, then an instructional video plays, prepping the audience. Words flicker on the screen: “I’m new to AR, what should I do?” A clip shows a young man exploring the sea of boxes while holding an antique stereoscopic viewer to his face. The viewer has been retrofitted to fit a Samsung S7 phone, whose camera allows you to see your surroundings on the phone’s screen while also layering digital content onto the scene. 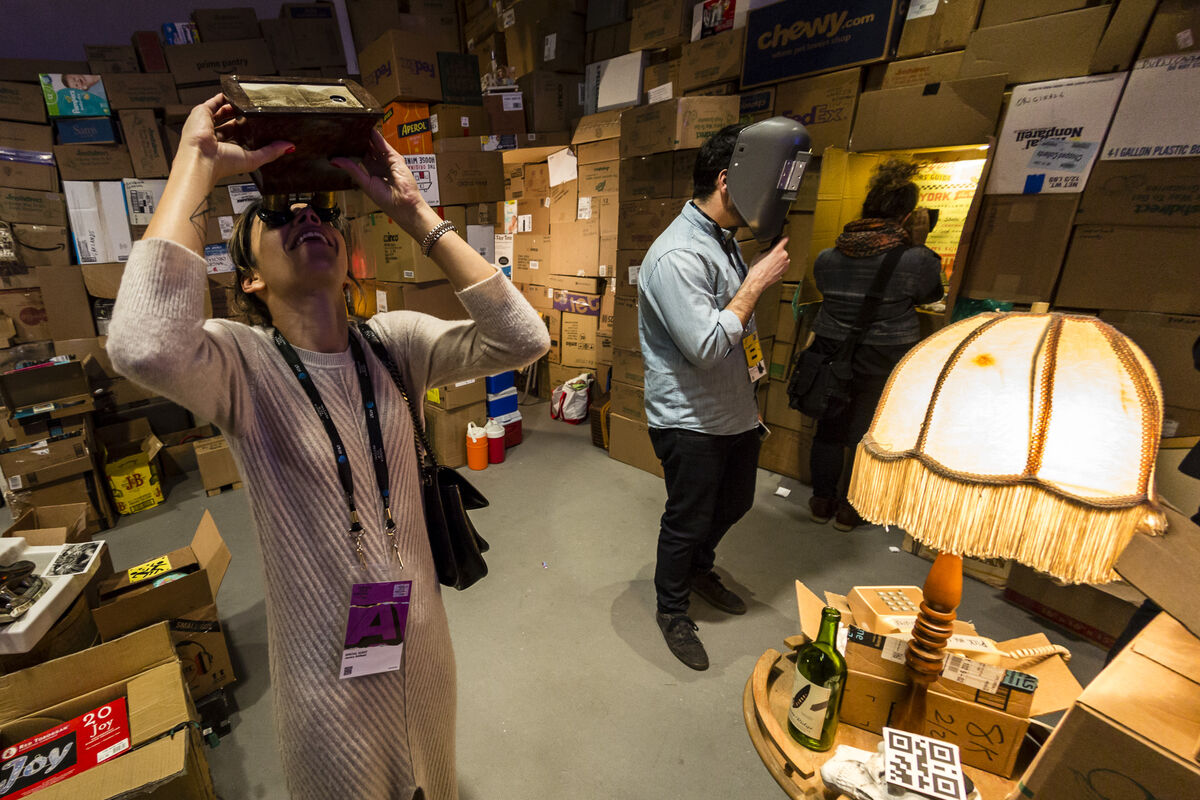 As you wander among the heaps of lampshades, dusty typewriters, and wine bottles, printed images and posters trigger 360-degree video clips that appear in your viewer. Looking at the empty wooden frame of a painting, a short
Van Gogh
video launches, transporting you directly into the landscape. If you stick your head into one of the 700-or-so cardboard boxes comprising the installation’s walls, a recording of Sobelle is triggered: His face peers down at you as he rummages through the box’s contents. In a destabilizing moment, you realize that you have, in fact, become those contents.
The boxes and props were carefully selected by archivist Jamie Boyle and designer Steven Dufala, who sourced them in part through RAIR, a program Dufala started with his brother in Philadelphia that enables artists to rummage through tons of recycled trash. Each box has been labeled in black marker, from the mundane—“barbie parts + G.I. Joe,” “taxes I forgot to file,” “rejection letters (don’t throw out)”—to the metaphysical: “unrequited love.”
The room serves as a meditation on the relationship between ourselves and our objects—how we arbitrarily categorize, imbue meaning, and, in some cases, discard them (to paraphrase the German philosopher Arthur Schopenhauer, only loss teaches us about the value of things). Sobelle’s fascination with the potency of objects arose seven years ago during a time of loss and trauma. “I was leaving Philadelphia, leaving a relationship, leaving a theater company—there was a lot of drama in my life,” Sobelle told Artsy. “I found the relationship to objects became poignant as I was packing up. You’re not sure what to do with certain things. Do you gift them? Do you store them? Everything seems charged.”
Objects in Mirror AR Closer Than They Appear uses AR to play on this concept, literally augmenting and charging objects with memories. While the analogy may seem a little on-the-nose, the installation benefits from being free of any preset narrative. Each participant explores the space at their leisure, sticking their heads inside lampshades and through car doors; discovering their own meaning; and creating their own individual experience.
The limitations of current AR technology are evident in the installation—most noticeably, the inability for multiple people to share the same persistent, stable experience and see the same AR objects and videos at once. (I watched as two participants unsuccessfully attempted to stick their heads inside the painting frame at the same time.) There also remains an air of unpredictability: Even the slightest change in lighting can throw off the triggers and cause them to fail. And no effort was made to disguise the print-outs of QR codes dotted around the room, visible markers that look incongruous among the vintage treasures. But there’s a self-awareness about these limitations, and the mood is one of open, playful experimentation. 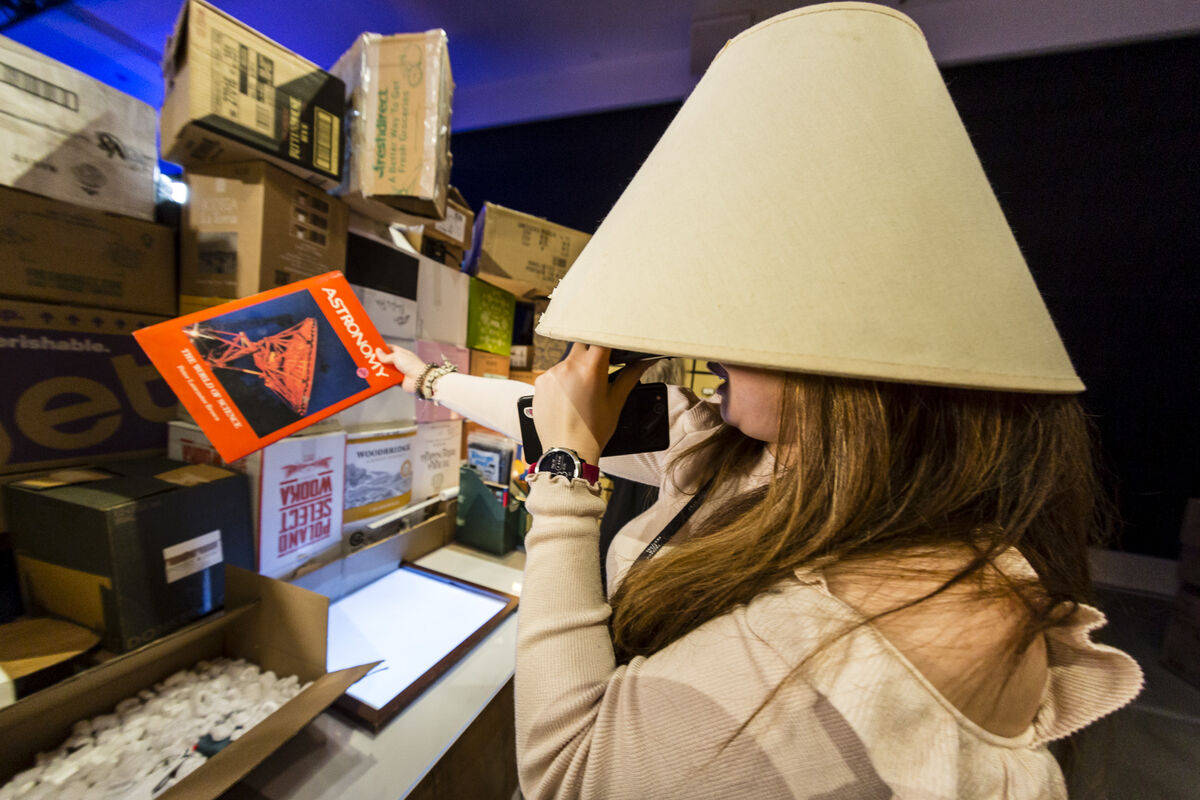 Advertisement
Most AR exhibits—like the 3-D sculptures that
Jeff Koons
layered over the real world last fall—have used simpler techniques like projection mapping or Snapchat-style filters, which lack the functionality necessary for a more interactive experience. The creators of Objects in Mirror initially explored Apple and Google’s offerings, ARKit and ARCore, which allow you to map a room and place interactive 3-D objects using simultaneous localization and mapping, also known as SLAM. But the software lacked the image-recognition ability necessary for the show. Working with The Molecule, a visual effects studio, the team instead opted to use Vuforia, a platform geared toward image recognition and triggers.
For hardware, a strapped-on headset was also the initial plan, which would enable the audience to explore hands-free. But the physical terrain of the installation was deemed too precarious, and the best AR hardware available, Microsoft’s HoloLens and the Magic Leap, is still too clunky and expensive for creatives working on a budget. Instead, participants navigate around the physical space and one another, using one hand to hold the viewer (a $12 off-the-shelf Tzumi headset) and the other to pick up objects.
The future is not one filled with QR codes or awkward handheld devices. The technical and financial barriers to entry for AR will continue to drop in the coming months, and tools like ARKit, ARcore, Unity, WebGL, and node.js will become increasingly accessible for use by non-developers. Location and spatial data will become automated triggers, and, as AR becomes more stable and persistent, we will start to see a lot more opportunities for experimentation open up.
Sobelle’s set includes nods toward this obsolescence of technology. Next to a dusty Victrola, a box labelled “mice” holds a plastic toy rodent tangled in the wires of 1980s Apple Bus mice. In a pile of books, there’s a copy of the 1999 book Internet Cool Guide: A Savvy Guide to the Hottest Web Sites. Panasonic RCA camcorders litter the periphery of the installation; once prized household possessions, they now look prehistoric—much like today’s evolving VR and AR headsets, which rapidly become fossils when new models are released.
The whole experience feels like getting lost in your grandparents’ attic—which is to say, it’s hard to keep track of time. But then a notification pops up, a reminder that there’s a phone a few inches from my nose. Text floats over the sea of detritus, breaking the magic: “System UI - Battery Power 15%.” I exit the installation into the main atrium of Storyscapes, a long hallway of VR demos. Opposite, two men sit in an Oculus booth, slumped in chairs watching Campfire Creepers, a 12-minute horror show. I consider for a moment, then opt to step outside for some air.
Alice Lloyd George is an investor at RRE ventures and the founder of Flux, a podcast about the frontier of technology. She is a VR for Change (VR4C) ambassador and on the board of the Current Museum.
Related Stories