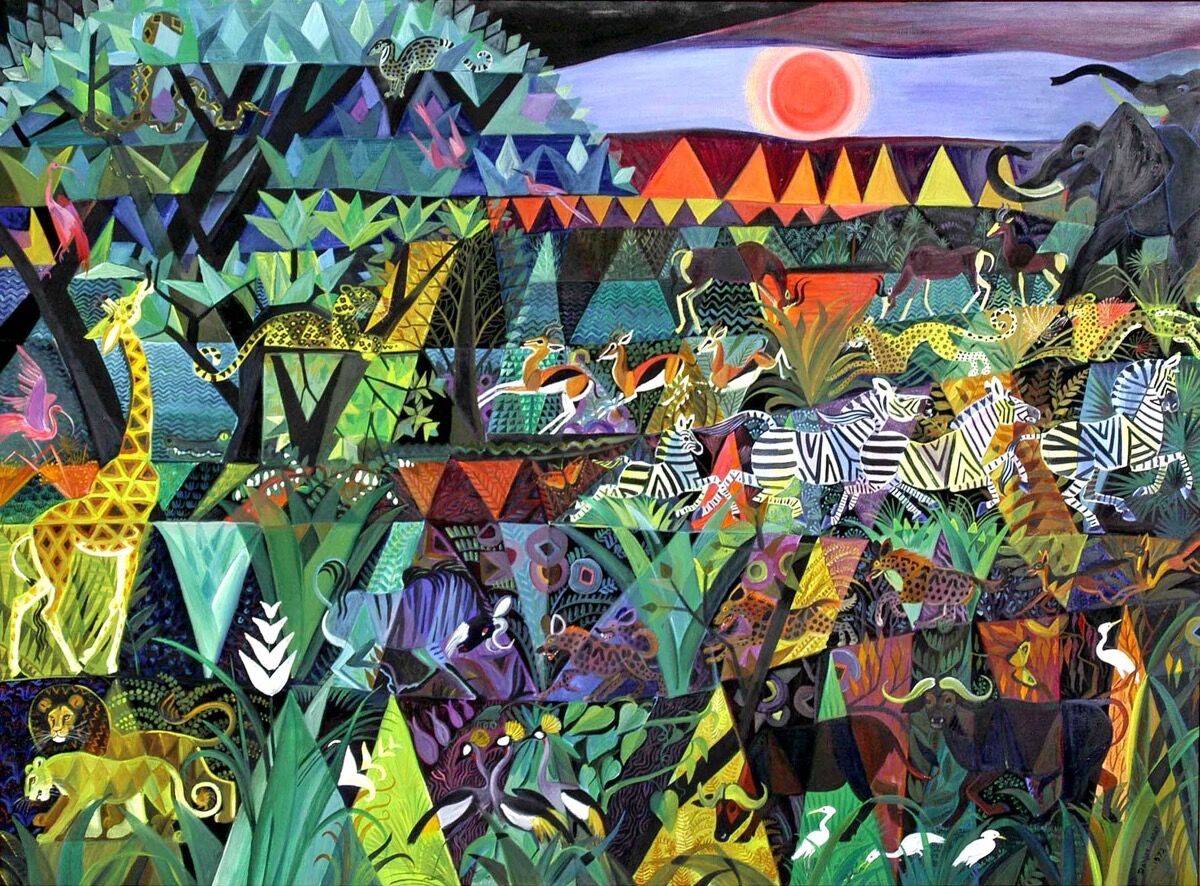 In 1964,
Georgia O’Keeffe
was driving from her home in New Mexico when she sensed something strange. As her biographer Jeffrey Hogrefe wrote, the artist later said she felt “as if a cloud had entered her eyeballs.” This obstruction was one of the first clues that O’Keeffe’s sight was fading. Eight years later, she was diagnosed with macular degeneration, a medical condition that damages the macula—a small part of the eye central to the retina—leading to loss of central vision.
Currently, age-related macular degeneration (AMD) affects nearly 30 percent of people over the age of 75 (Caucasians, and those over the age of 60, are particularly at risk), and there is no cure. For an artist, an AMD diagnosis could mean losing not only a basic sense, but also a fundamental means of self-expression.
Post-AMD experiences differ, but loss of color vision and contrast sensitivity can occur, and working with detail can be impossible. However, many artists suffering from retinal damage find workarounds and do keep creating. O’Keeffe, for one, enlisted the help of assistants and took up sculpting when her vision worsened;
Edgar Degas
, who likely had AMD, worked more with pastel and clay when his vision deteriorated. 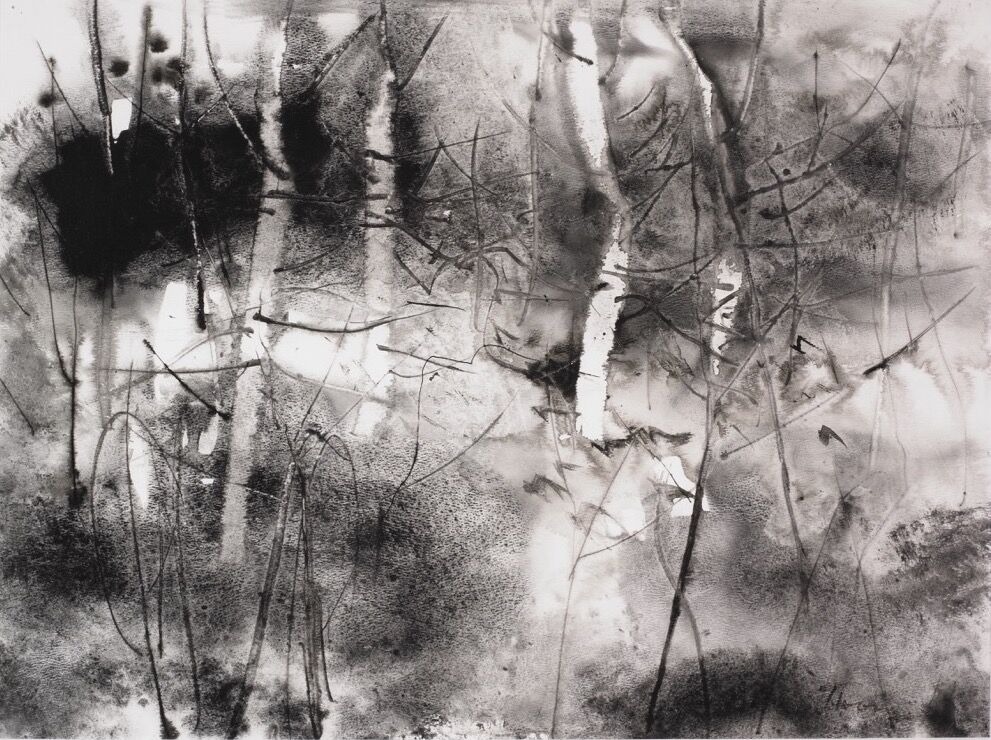 William Thon, The Birches (post-macular), 1996. Courtesy of The Vision and Art Project.

Notably, artists creating work after vision loss can stay true to their own style and ideas, as a current exhibition at the University of Cincinnati exemplifies. “The Persistence of Vision,” on view at The Philip M. Meyers, Jr. Memorial Gallery, features over 50 works by eight contemporary artists affected by AMD, including
Hedda Sterne
,
Lennart Anderson
,
David Levine
, and Serge Hollerbach. On view are works—mostly paintings and drawings, with some sculptures—made before and after the artists were affected by macular degeneration, making this the first art exhibition to examine how vision loss changes an artist’s practice.
The show emerged out of the Vision and Art Project, an initiative by curators A’Dora Phillips and Brian Schumacher to chronicle works of artists with AMD. Supported by the American Macular Degeneration Foundation, the project keeps a running list of affected artists and collects relevant research on each one; Phillips and Schumacher also interview artists, when possible, about their personal experiences.
“Our project hopes to make [the realities of AMD] very public and open: that this affects a lot of artists, and they continue working,” Phillips said. “We’re trying to make sure that their works continue to be shown and known, because vision loss can be very isolating.” She added that there are no formal resources available to artists with AMD. 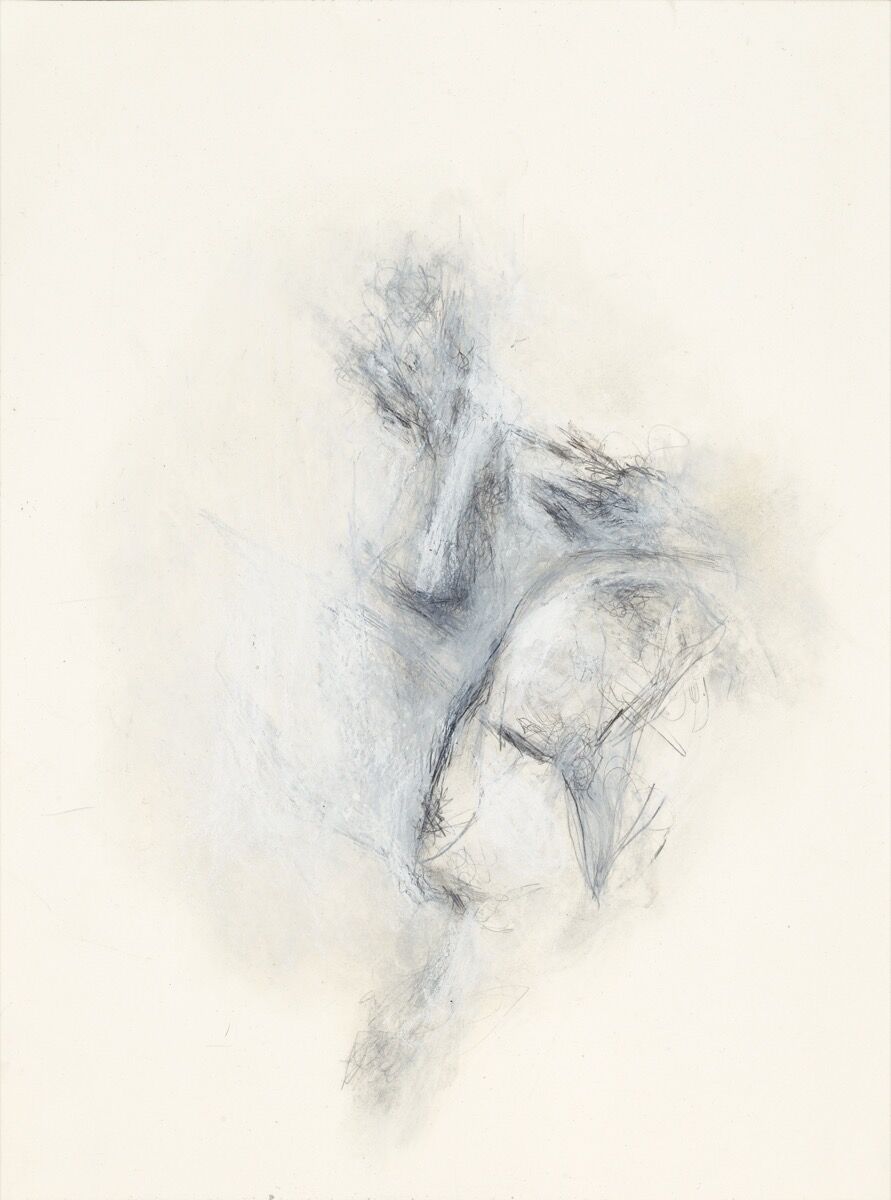 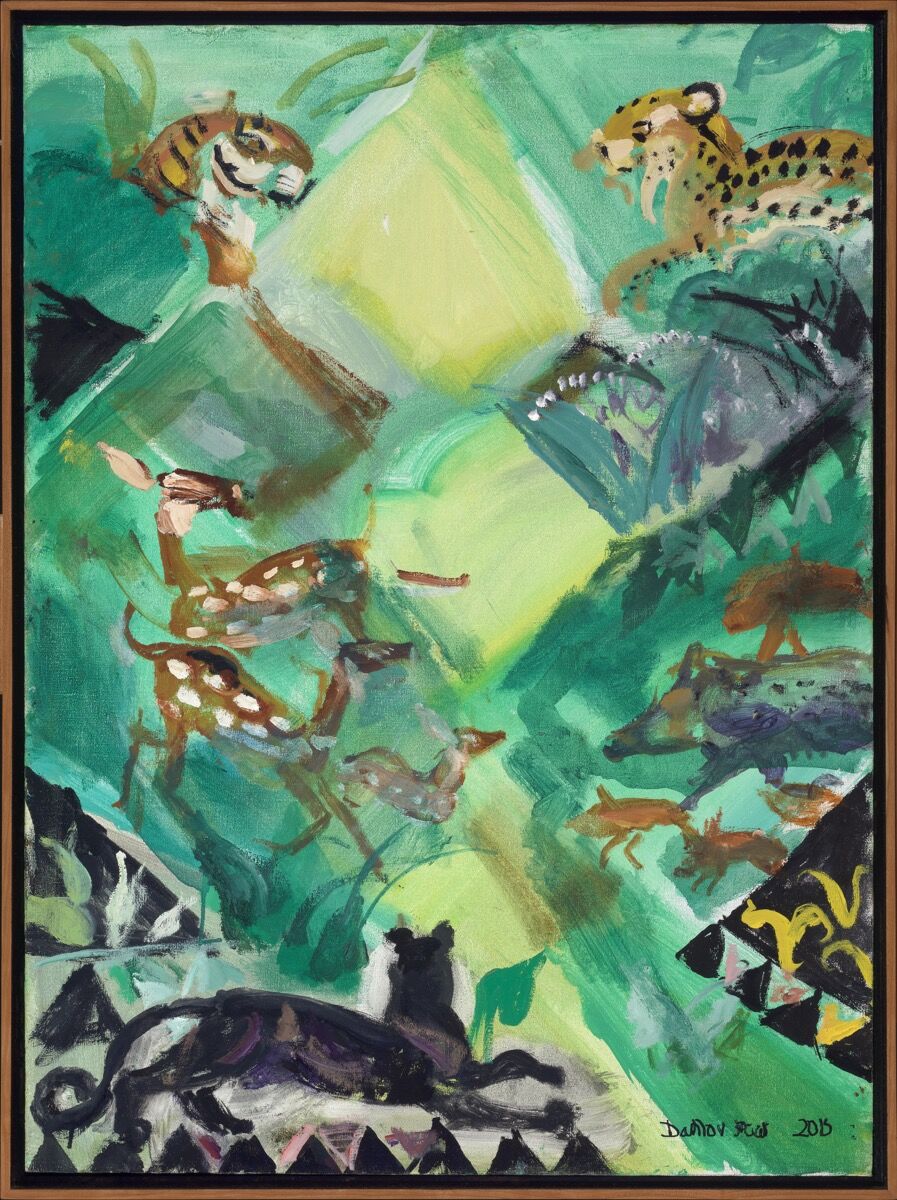 Advertisement
Like O’Keeffe, many artists who eventually have only peripheral sight are pushed to explore new mediums. The tireless painter Hedda Sterne, diagnosed with AMD at the age of 83, discovered that she could no longer paint five years later. She found solace in drawing, and, unable to see color, made monochromatic sketches with graphite, oil pastel, and even Wite-Out. These spectral depictions of everyday life—a birch tree, an insect, a mother and child—consist of layers of delicate lines and faint smudgings; although they seem cursory, they convey Sterne’s total awareness of form.
In a similar vein, landscape painter
William Thon
became legally blind in 1991 and stopped working with oil paints. Unable to see color, he instead embraced black and white ink, forming abstract forests on paper with dramatic strokes and stains. He even used his fingers to trace shapes he had known for decades; if you carefully observe his work, faint fingerprints appear in the scenes.
Thon was relying on his instinct, much like another painter in the exhibition, Dahlov Ipcar, who used her memory to keep working after vision loss. Phillips and Schumacher visited Ipcar in 2015, when the artist expressed fear that she was in the process of completing her final work. The painting in question is a tableau of a panther romping beneath three birds; though the brushwork is looser, it resembles a similar, pre-macular painting by the artist from 1972, which shows a pack of running canines. Commenced over 40 years later, Panther and Birds is a testament to how the Maine-based painter held on to the themes she adored since her childhood—lively scenes with animals prancing freely amid patterned backgrounds. Ipcar, who died last year, never did complete the painting, but the works she left behind reveal the playful, limitless visions that filled her mind for nine decades. 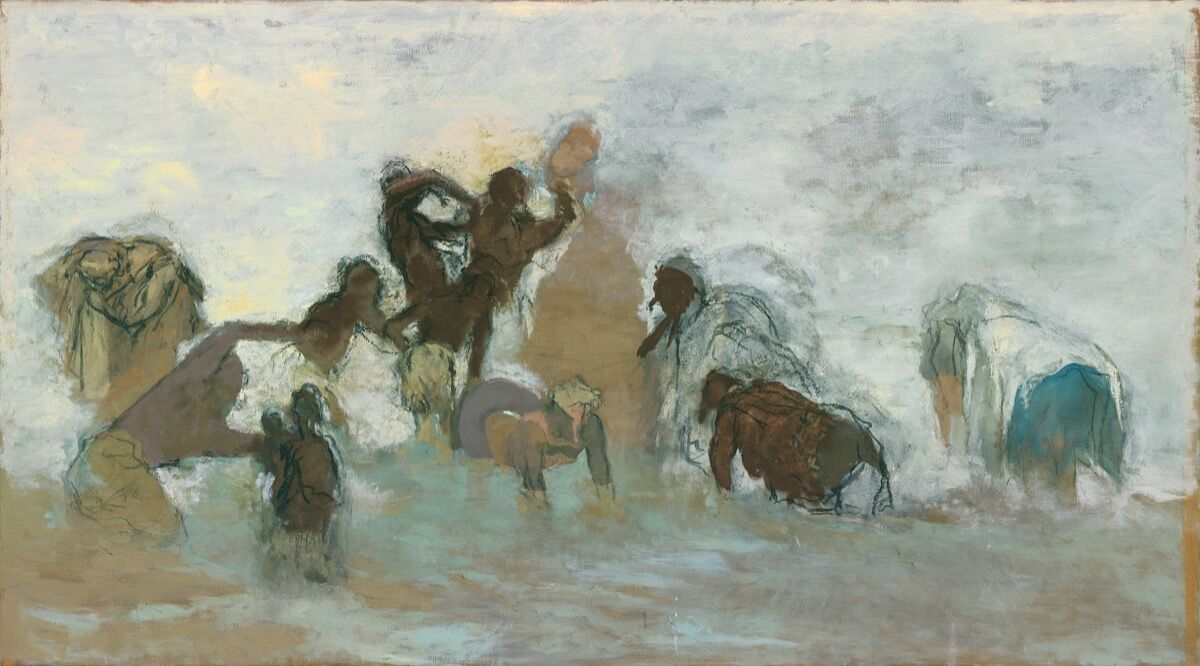 While some artists go through phases of experimentation or adaptation to continue to work with AMD, their experiences are certainly not always free from frustration or feelings of helplessness. Ipcar, as well as painters David Levine and
Thomas Sgouros
, each suffered from depression of varying severity.
Levine, best known for his caricatures of famous personalities in the New York Review of Books, relied on observation to draw and paint portraits. Damage to his retina led to his loss of contrast sensitivity, which makes it hard to see in low light and other conditions where subjects blend into their backgrounds. As his sight worsened, the Review even rejected some of his caricatures for their uncharacteristically loose lines. Similar challenges emerged when Levine worked on larger paintings. “He seemed ever dissatisfied,” his son, Matthew Levine, recounted. Levine’s final painting is an incomplete scene of Coney Island bathers; its title, The Last Battle (c. 2007–08), seems to speak to Levine’s struggle of redrawing and erasing before he decided to stop.
For the Chicago-born Sgouros, AMD was so overwhelming that he considered ending his life. A meticulous observer, Sgouros lost vision in both eyes over the course of just six months in 1992, and was no longer able to create detailed still lifes. But, in time, he went on to paint expansive landscapes commanded by romantic skies. Like Sterne, Sgouros tapped into memories, as well as principles of oil painting—and he made sure to keep a meticulously organized palette. This series, “Remembered Landscapes,” became his sole focus for the last two decades of his career. 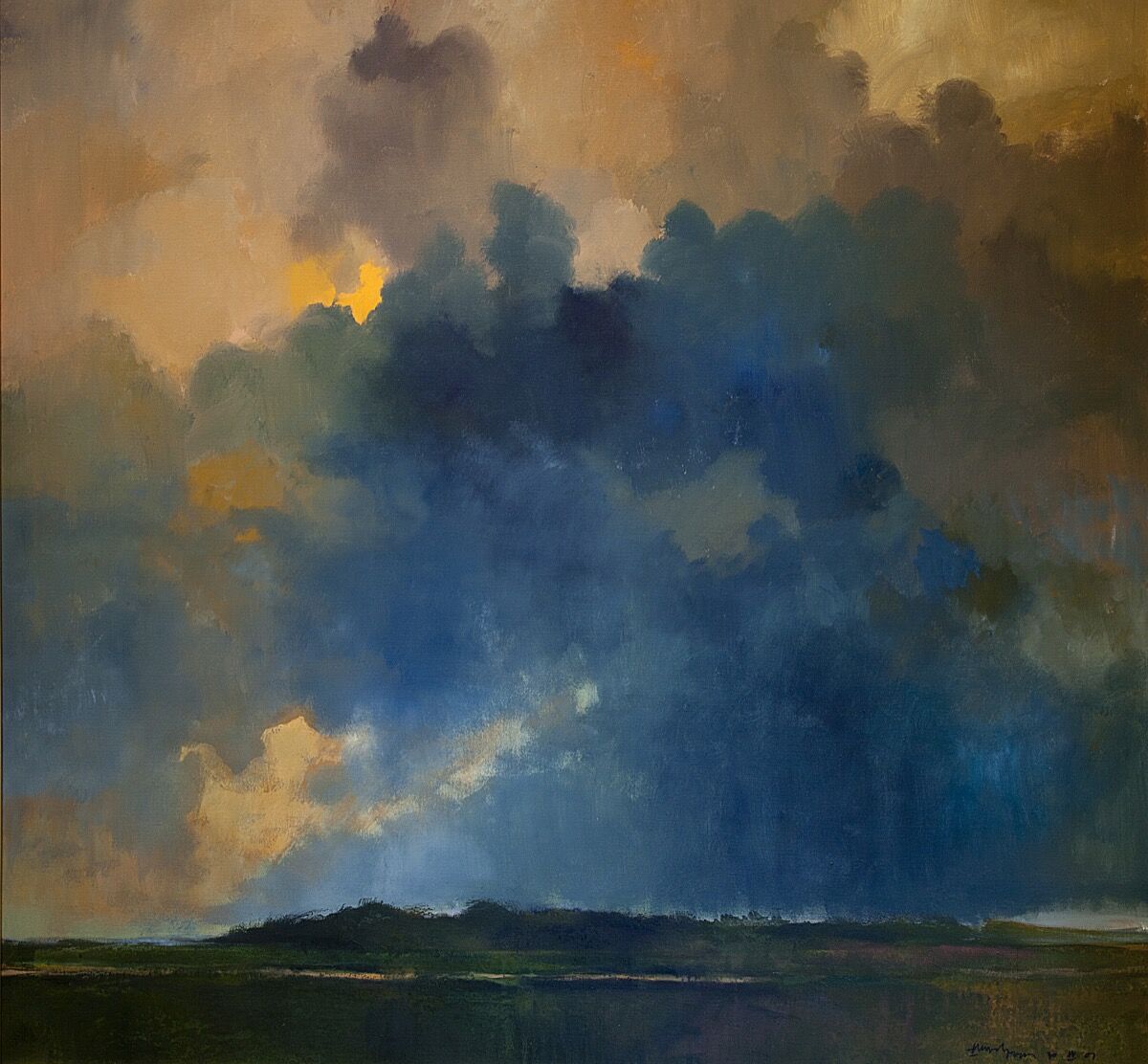 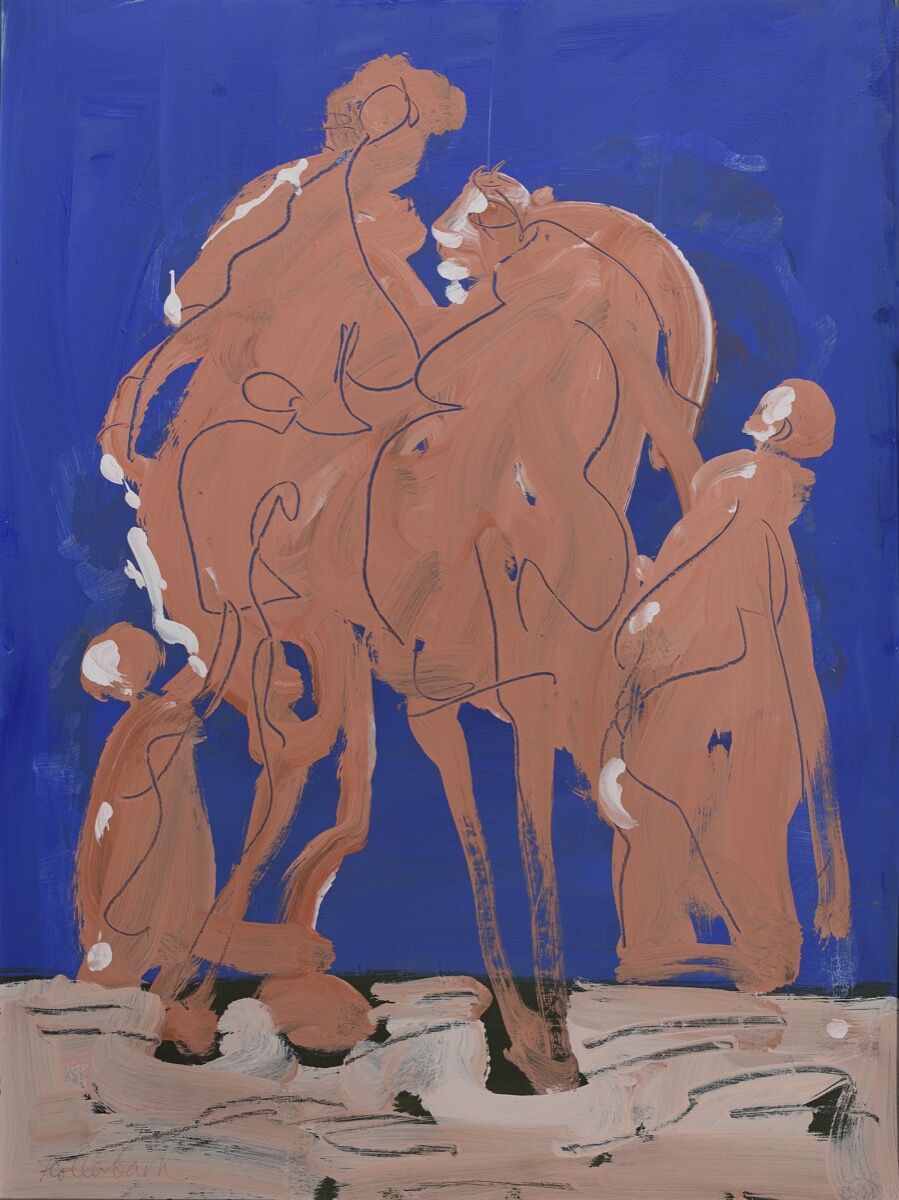 Serge Hollerbach, Figures in Orange (post-macular), 2002. Courtesy of the artist.

While “The Persistence of Vision” is organized by artist, individual pieces are deliberately not shown chronologically. The show’s curators instead invite visitors to consider what an artwork might look like pre- or post-macular degeneration. Seen as a whole, an artist’s body of work can challenge certain assumptions about AMD—that loss of vision leads to more
Impressionistic
painting, for instance, or an inability to work in the same medium or with the same tools.
“In some ways, there’s such a similarity and continuity between the early and late work,” Phillips said. “The passions, the obsessions, the approaches that an artist was utilizing early in their career…they relied on these when they got older, as well.”
Encapsulating this notion is a painting by the late Lennart Anderson, entitled Idyll 3. Anderson, who lost vision in his right eye in 2001, followed by his left in 2007, worked on this piece between 1979 and 2011. His condition made it difficult for him to see colors on his palette, and he had to position himself inches from the canvas in order to paint, yet he returned to it regularly. Represented in this pastoral picture is not only Anderson’s continued interest in mythological, often bacchanalian scenes, but also the artist’s unwavering creative spirit. 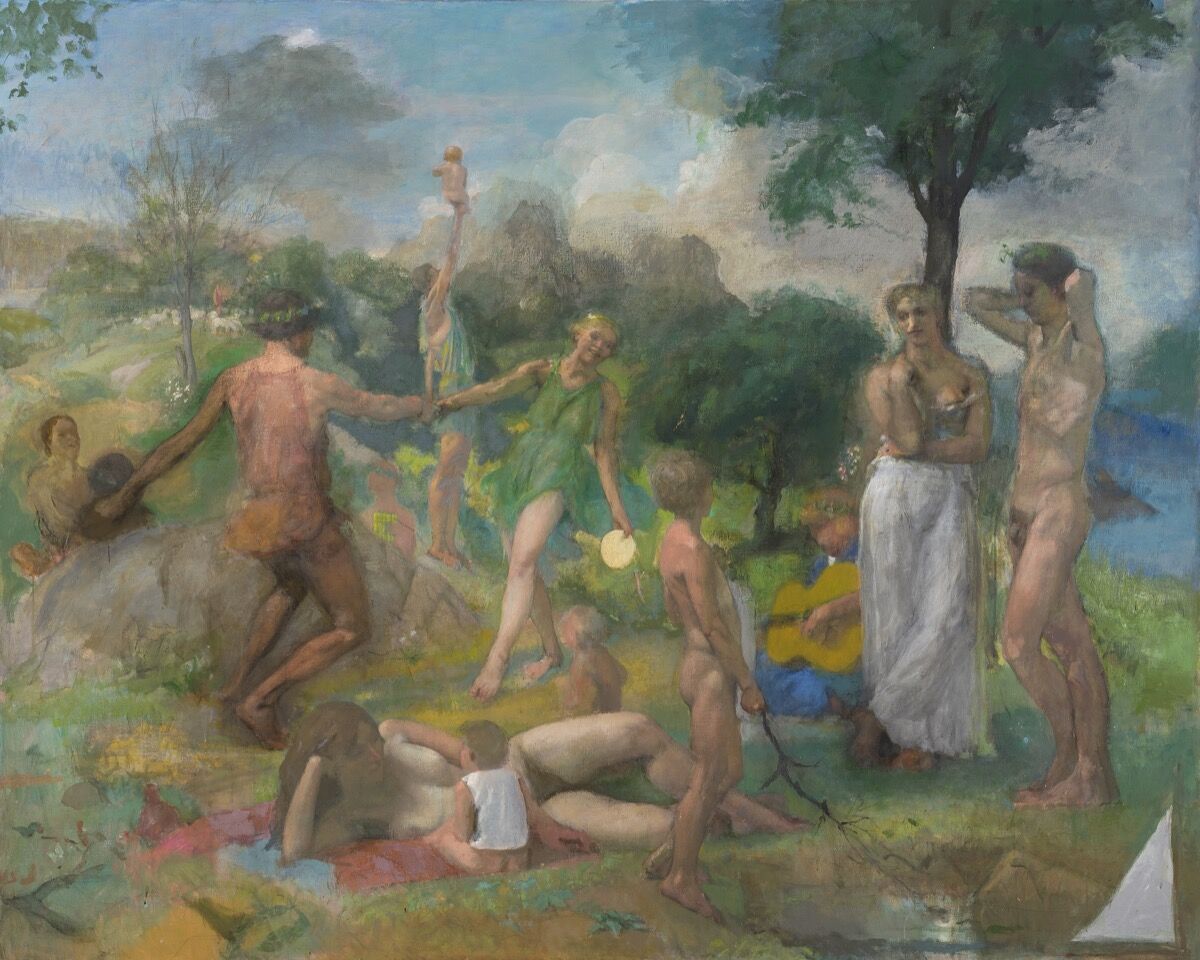 Anderson is one artist whom Phillips and Schumacher got to know well through the Vision and Art Project; they also formed close bonds with
Robert Andrew Parker
and Serge Hollerbach, two artists in the show who are still alive and creating work. But some artists approached by the pair have been reticent about publicly connecting their vision loss with their practices. They have concerns about how their art will be perceived, whether by the general public or the art market.
These are the very fears that Phillips and Schumacher hope to assuage through their own work. With this initial exhibition, the curators make clear how artists can continue on with their careers in spite of vision loss—they still have strength in creative agency.
Claire Voon
Related Stories