What Artists Are Doing to Help Save the Environment At an event in Nevada this past Friday,
Trevor Paglen
was reflecting on American attitudes toward spaceflight. “We think of space like we think of Nevada,” he said. When we dream of colonizing planets and mining asteroids, “we recapitulate the frontier,” extending it to outer space.
To combat this relationship to our solar system, Paglen, who was just awarded the prestigious MacArthur Fellowship, is collaborating with the Nevada Museum of Art, in Reno, for the planned launch of a satellite in 2018. Unlike the thousands of satellites currently in orbit, this one, Orbital Reflector, will have no commercial, military, or scientific purpose. Rather, it will be a public sculpture visible from Earth to the naked eye.
Paglen was presenting his Orbital Reflector at the 2017 Art + Environment (A+E) Conference, held at the Nevada Museum. Though borne out of Paglen’s research into classified satellites, this work is fundamentally about the plight of our planet. The prevailing attitudes toward space exploration, he said, are “a means that we use to imagine the planet we live on is disposable.” Paglen intends to encourage a healthier relationship to the environments we exist in and depend on, both near and far. But can art really change the way we think about and live in the world? The presenters at the A+E Conference—a roster that included architect
Rem Koolhaas
, Anchorage Museum director Julie Decker, Burning Man co-founder Crimson Rose, and numerous artists—offered insights into the strengths and limitations of environmentally engaged art. And across the presentations, a number of common approaches emerged, including an intention to shift perspectives on the environment and to bolster resistance to the systems that negatively impact it.
Like Paglen, artist
Jonathon Keats
strives to reimagine fundamental human relationships, such as those with time. Working with the Nevada Museum and the Long Now Foundation—an organization dedicated to fostering long-term thinking about the world—Keats is developing a 5,000-year calendar based on the projected growth of bristlecone pines, the world’s longest living tree.
Through our standardized Gregorian calendar, Keats believes we “implicitly assert our control over the world.” Because tree rings record environmental changes, Keats’s calendar, titled Centuries of the Bristlecone, will mark time based on the tree’s reaction to environmental conditions. If climate change stunts growth, for example, time will slow down. Keats says this new time will be “alive with contingencies,” and hopes it will challenge our hubris when it comes to the environment.

Advertisement
This may all seem esoteric, but an artist like
Ana Teresa Fernández
, who also presented work at the conference, demonstrates the ability of interventions in the landscape to help viewers imagine another world. For Borrando la Frontera (Erasing the Border) (2011, expanded 2016), for instance, Fernández painted a section of the U.S.–Mexico border wall in Tijuana so as to make it appear invisible.
As she completed the work, a local jogger excitedly told Fernández he could now imagine what the neighborhood would look like without the wall. Fernández’s illusionary return of the landscape to something less invasive, less oppressive, nourishes the imagination.
Minerva Cuevas
refused twice when Mexico City’s Museo Universitario de Ciencias y Arte invited her to create a work that would make a lasting impact on the city’s abundance of trash. She considered the task too monumental for any artist to accomplish. But she relented on the third ask and worked with researchers at the National Autonomous University of Mexico to cultivate bacteria that breakdown plastic.
Cuevas compared standing on a landfill to standing atop capitalism. In this way, her project, Proyecto de Biorremediación (Biorepair Project) (2010), is also a metaphor for the destruction of capitalism—for life devouring industry. But the work is not only a poetic gesture; the research now lives at the university and has the potential to continue destroying waste. 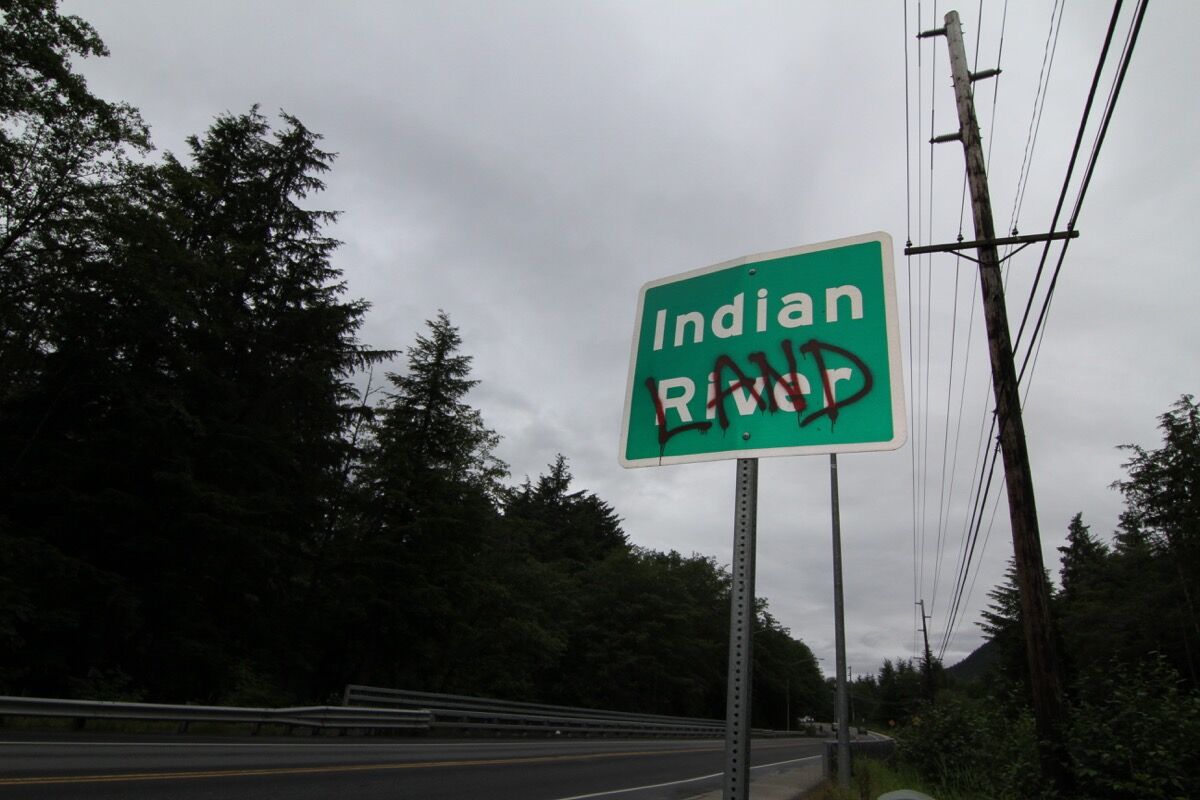 Nicholas Galanin, Get Comfortable, 2012. Courtesy of the artist.

Los Angeles-based artist Lauren Bon and her Metabolic Studio also use artistic metaphor to connect Angelenos with eastern California’s Owens Valley, where the region’s water supply comes from. In past works, Bon has conducted a 240-mile mule-back journey along the Los Angeles Aqueduct and established a pirate radio station that plays sounds recorded from the dry bed of Owens Lake. But she has also recently secured permission from the state of California to collect dirty water from the Los Angeles River with a giant wheel, treat it, and then redistribute it to public parks. Like Cuevas’s, Bon’s work will bring real physical change to the land.
Among other presenters at the event,
Nicholas Galanin
, a multidisciplinary Tlingit/Unangax̂ artist from Sitka, Alaska, referenced two of his works that take aim at the erasure of Indigenous place names in Sitka. “Our land is our life,” he said. “We have place names. We don’t need your terrible names.” Galanin’s work acerbically confronts colonial logic, predicated upon exploitation, destruction, and erasure. Resisting this logic sets the groundwork for a world that can thrive outside of it.
A fellow Alaskan, the Tlingit/N’ishga artist Da-ka-xeen Mehner, described his complex relationship to the Trans-Alaska Pipeline, which cuts through the land between Prudhoe Bay in the north and Valdez in the south. As oil is pumped out for consumption, Alaska’s permafrost is thawing, its glaciers are melting, and its coasts are eroding. At the same time, the pipeline brings jobs, and Mehner even uses it to navigate, such as for picking berries. Mehner’s “My Right-of-Way” series combines photographs documenting the pipeline’s impact on the land with those that reference his daily and family life.

While these photographs don’t express sympathy for the petroleum industry, they do exhibit nuance and resist one-dimensional representations of Alaska, the pipeline, and the indigenous communities affected by its presence. To simply negate the industry is to negate the lives that have adapted to it. At the same time, his images reveal the power and pervasiveness of the industry.
Mehner, like each of these artists, encourages viewers to see the world with more complexity. But art isn’t all-powerful. Cuevas was right to question her power to tackle Mexico City’s garbage problem. Forcing too much responsibility on artists is both a mistake and a moral abdication. Yet creativity is one of humankind’s most transformative tools, and—as these artists’ works testify—its ability to challenge the imagination should not be understated.
—Matthew Harrison Tedford
Related Stories