The Artists Who Have Made the Night Sky Their Muse 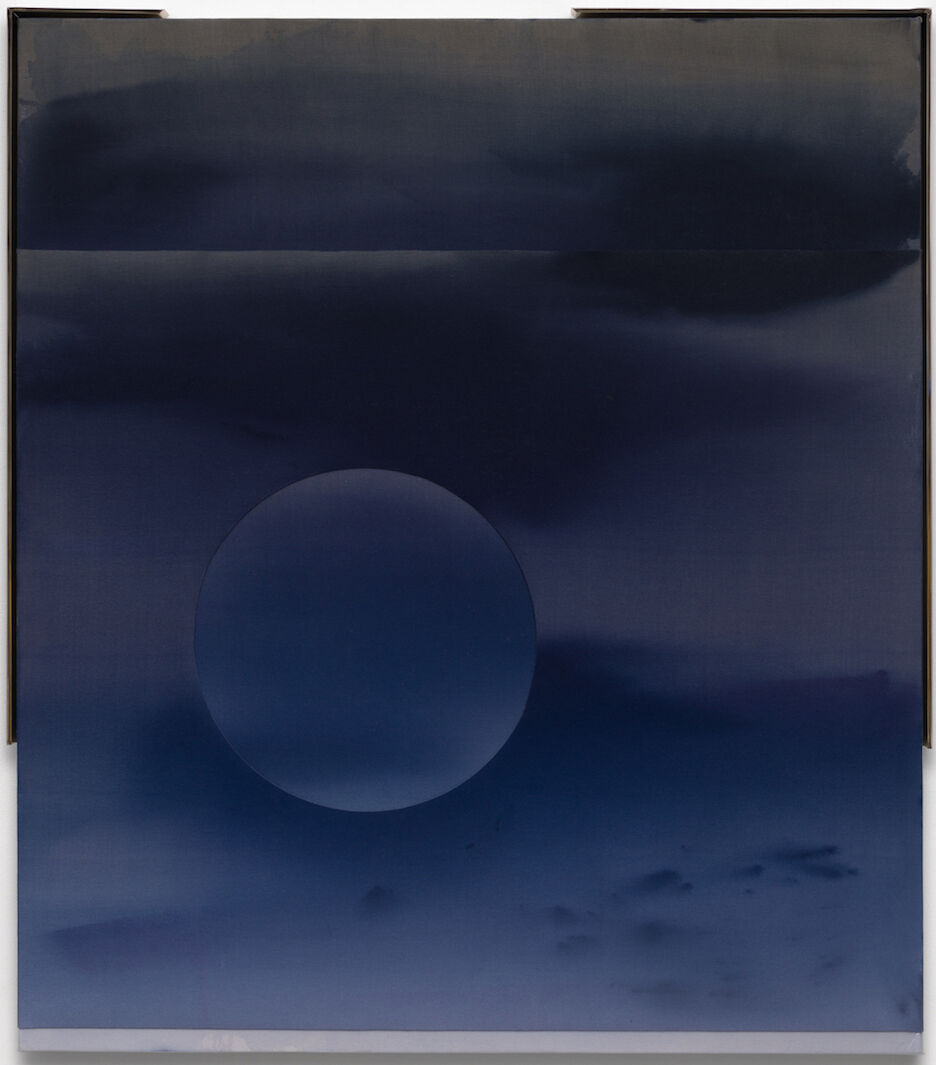 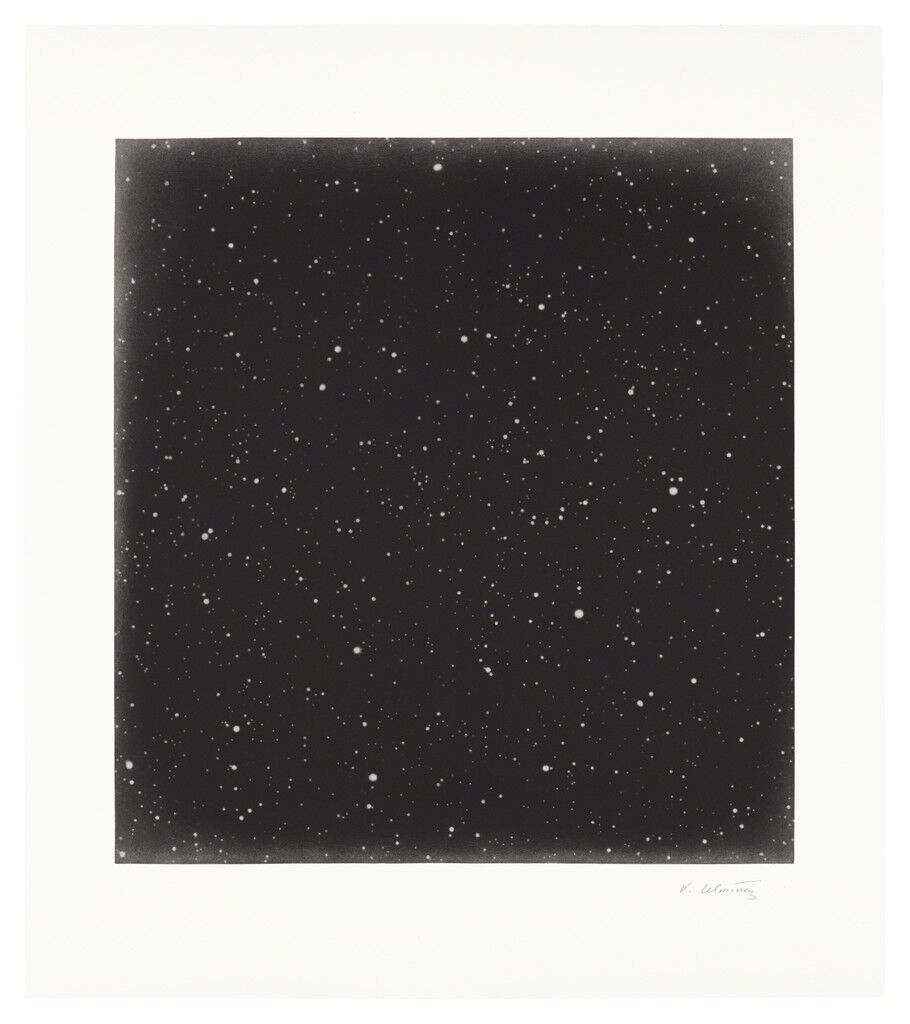 Vija Celmins
Untitled (Dark Sky 3), 2016
Senior & Shopmaker Gallery
Rich in mystery and symbolic potential, the nighttime has long inspired artists of all disciplines to consider darkness, the cosmos, and the unknown. Romantic-era poet Lord Byron used the evening to epitomize beauty, while modernist Dylan Thomas employed it as a metaphor for death.
In contrast, the oldest visual representations of nighttime were utilitarian. According to
NASA
, humans began creating lunar calendars around 32,000 BC. Cave artists in France and Germany depicted constellations, the moon, and seasonal changes. These complex diagrams helped ancient people prepare for the elements and animal migrations, long before iPhones offered instant atmospheric updates.
Art critics often describe more recent after-dusk paintings as “nocturnes.” The term derives from Frederick Leyland, a patron of American painter
James Abbott McNeill Whistler
. In 1871, the artist created the first of many canvases depicting the Thames River soft and tranquil in the moonlight. Leyland was an amateur pianist, already familiar with musical “nocturnes”—Wolfgang Amadeus Mozart, Frédéric Chopin, and Felix Mendelssohn all created classical compositions inspired by, or meant to be played during, the evening. By employing the same term for visual art, Leland suggested an underlying lyricism in Whistler’s scenes.
Just over a decade later,
Vincent van Gogh
created perhaps the world’s most recognizable nocturne, Starry Night (1889). In thick blue and yellow swirls over a half-invented town, Van Gogh rendered the clouds, stars, and moon. The dreamy composition islouder and more symphonic than Whistler’s quiet scenes. 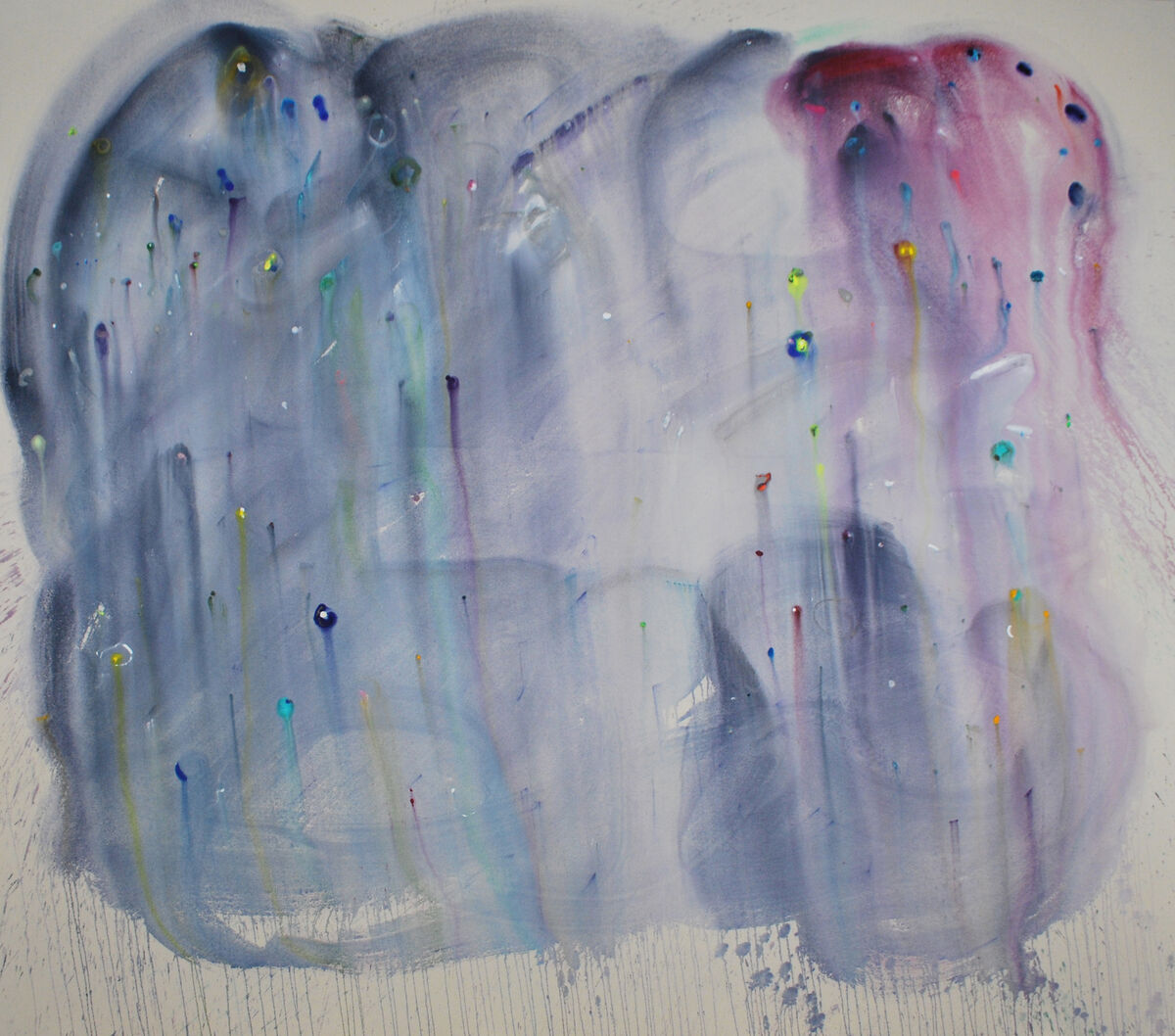 Over 50 years later, one of
Henri Matisse
’s most famous cut-paper collages, Icarus (1947), offered a modernist connection between the nocturne and the aural realm. The artist included the work—which features a black figure falling against a deep blue, starry sky—in his book called Jazz. The title likens Matisse’s spontaneous artistic decisions to the improvisations of a drummer or saxophonist in a smoky club.
Contemporary painters and filmmakers who engage with the topic immediately situate themselves within a long lineage of creative predecessors, yet the material still offers seemingly endless generative possibilities.
Mara De Luca
,
Michal Rovner
,
Vija Celmins
,
Ann Craven
, and
John Riepenhoff
use night scenes to thematize fear and current events while engaging new, unique painting processes.
Milwaukee-based Riepenhoff adopts a loose, uninhibited approach to the nocturne and takes it a step further: He actually paints in the dark. Since 2009, he’s used a plein air technique to depict the night sky wherever in the world he visits. Riepenhoff often uses just a small lantern to illuminate his pigments and canvases as he stands outside in the northern woods of Wisconsin, Puerto Rico, Japan, or the Isle of Eigg.
The works, whose titles often include the names of these disparate locales, become autobiographical records of his itinerant life. Yet the brushy abstractions are more like markers of Riepenhoff’s immediate movements than of accurate depictions of a particular place and time. “It’s more about my relationship with the night sky,” he said. Following a painting session, Riepenhoff can’t be sure what he created, quite literally, in the dark; it’s only in the morning daylight that he really encounters his artwork for the first time. 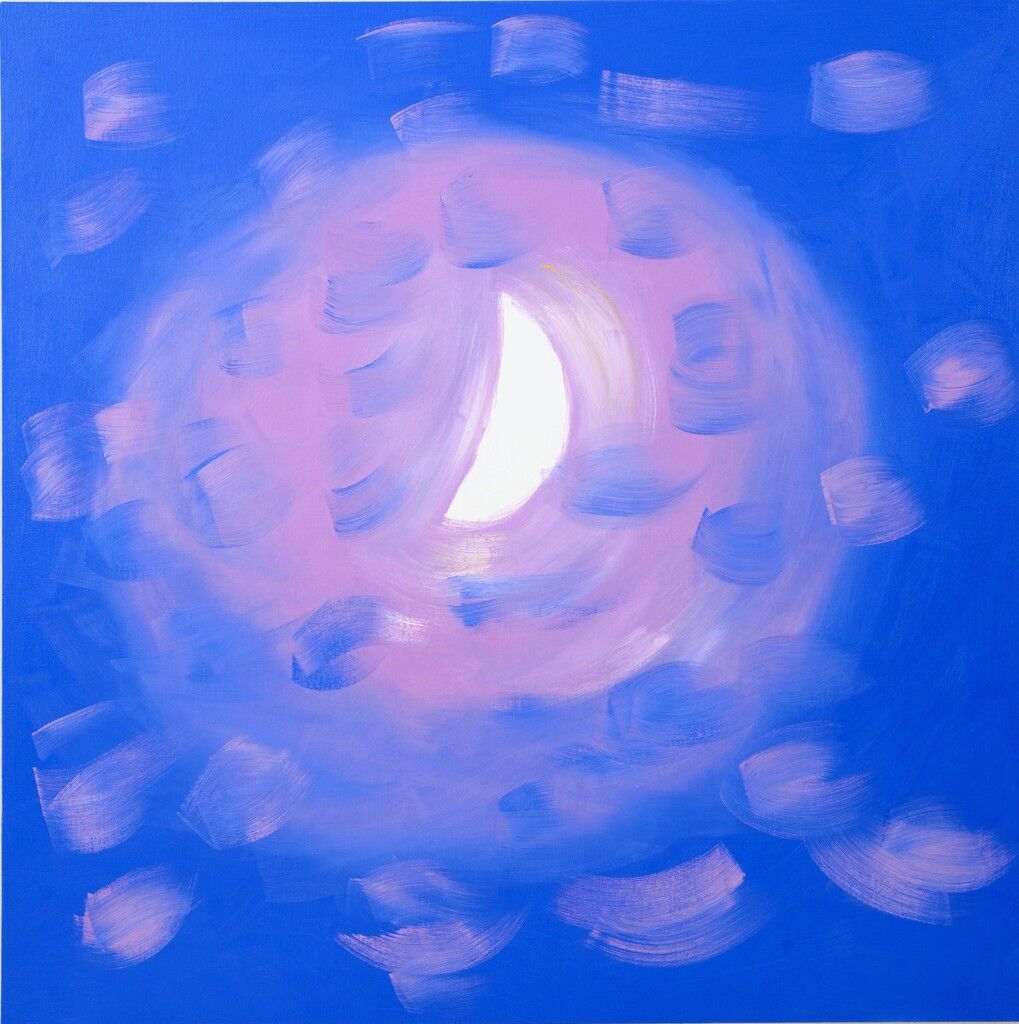 Advertisement
Ann Craven invokes a similarly quirky process with the moon paintings she’s been making since 1996. During a single evening, she’ll render a series of small canvases depicting the dark sky. The act of repetition further distances Craven from the original event. At Cincinnati’s Contemporary Arts Center, she once hung 400 14-by-14-inch canvases tracking the changing moon.
In contrast to Craven’s and Riepenhoff’s gestural renderings, Vija Celmins has long been known for exacting depictions of starry night skies that are actually derived from photographs. Celmins’s work is impressive for its precision—each drypoint print, charcoal drawing, or lithograph can take months to make. When hung on the wall, they resemble portals through the gallery walls; horizonless escapes into the heavens.
If Riepenhoff and Celmins offer mystical, meditative visions of the darkened sky, Michal Rovner’s representations suggest something more insidious. In 2016, the Israeli artist mounted an exhibition entitled “Night” at Pace Gallery, filled with still and moving images of jackals. The nocturnal animals appear dark and blurred at the edges, foreboding and portentous.
Rovner’s new film, Nilus (2018)—on view now at Pace’s outpost in Chelsea—continues this fascination. On a split screen, a jackal slowly moves its head back and forth. Its bright, round eyes are the most striking features in this haunting night-vision portrayal. Rows of small lines, almost like tally marks, overlay the animal’s figure. Upon closer inspection, they resemble silhouettes of humans waving their hands. The strange scale makes the jackal ever more imposing. Rovner said that over the past few years, she’s been considering the tensions in the world that result from movements of refugees and massive terrorist attacks. 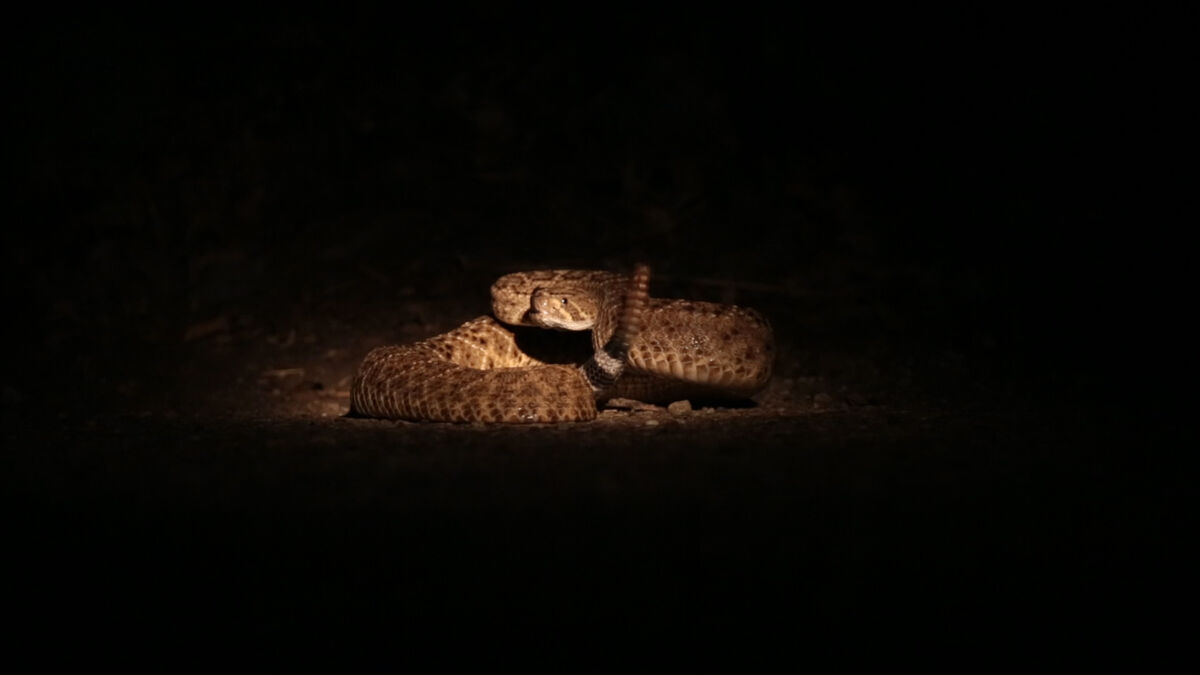 “There was a sense of instability, and on the other side, alertness,” she said. The artist decided to experience the evening herself, going outside to meet the jackals that roamed and howled around her home in Israel: “So much drama,” in her words. The experience was powerful, almost mythological: During her research, Rovner discovered that in Egyptian lore, the jackal Anubis transported the soul from life to eternity. Nilus similarly becomes a mediation between our daylit lives and the wild night landscape where violence can easily occur.
Meanwhile, further downtown in New York, TOTAH is currently exhibiting a film by Mara De Luca, Talisman: Snake (2018), which similarly captures an animal in the darkness—to even more frightening effect. Spotlit in the middle of a dark, obscure landscape, we see a coiled serpent hissing (the sound alone induces shivers). “It came from the idea of facing my biggest fear,” De Luca told Artsy. She once ran into a rattlesnake in Los Angeles’s Griffith Park; surprised and frightened by the encounter, De Luca began considering the city’s violent underbelly.
Fittingly, De Luca got her own snake in a manner only possible in La La Land: She found a guy who rented out reptiles to Hollywood, and visited his hut near Topanga Canyon. She filmed the animal, curled up outside. “The snake was actually more terrified than aggressive,” De Luca said. “After I sat with it and filmed it and confronted it, I noticed that it was more terrified than I was. My fear changed to compassion. It was very transformative.” Filming after dark, De Luca turned a nightmare into a creative provocation. As with other artists offering their own nocturnal visions, she suggests that to see the world more clearly, sometimes you have to start in the dark.
Alina Cohen
A previous version of this article contained an error incorrectly naming Rovner’s 2016 show as “Evolution.” The correct title of the show is “Night.” Additionally, Nilus is on view at Pace’s Chelsea gallery, not in Palo Alto.
Related Stories