CANAN, Woman with Testicles (Hünsa), 2009. Courtesy of the artist.

This past June, a Turkish woman took to Twitter with the following statement: “My husband can work if he wants.”
The post came after another round of grim news stories documenting domestic violence against women, as well as incidents of femicide. More Turkish women joined the chorus on Twitter, posting similar messages, such as: “The most beautiful career for a man is fatherhood.” Posts like these are meant to reverse and mock the discriminating and humiliating remarks used to hold Turkish women in an inferior social position to men. And, by doing so, Turkish women hope to spur an ongoing conversation about the dangers they face due to their gender.
These underlying societal issues have been addressed in contemporary art long before Twitter. Turkey’s pioneering contemporary female artists such as
Nil Yalter
,
Nur Koçak
, and
Füsun Onur
(the latter of whom will represent Turkey in the 2022 Venice Biennale) produced work commenting on gender inequality, women’s objectification, and their struggle in society since the late 1960s.

Işıl Eğrikavuk, installation view of Time To Sing A New Song, 2016. Courtesy of the artist.

However, contemporary art in Turkey is becoming an increasingly prominent platform to discuss women’s rights. And women artists in Turkey continue to play a critical role in challenging the conservative gender norms.
Işıl Eğrikavuk
, a Turkish contemporary artist, writer, and scholar based in Berlin, noted that humor has been used as a protest tool, most notably during International Women’s Day celebrations in Turkey.
“The topic of women’s rights is so heavy that we feel the need to create moments of relief,” Eğrikavuk said. “That is why we need a playful language to reverse situations and to embrace an alternative perspective, both in protests and in contemporary art.”
Eğrikavuk’s piece Time to Sing a New Song was commissioned right after the International Women’s Day marches on March 8, 2016. Inspired by the innovative rally signs, Eğrikavuk created an animated video installation with the slogan “Eve, Finish Up Your Apple!” The artist proposed an alternative to the cunning female image of Eve that is at the core of monotheistic religions. Eğrikavuk’s Eve could finish eating her apple instead of giving it to Adam, which ironically bore consequences for the artist, as prophesied in the religious texts. 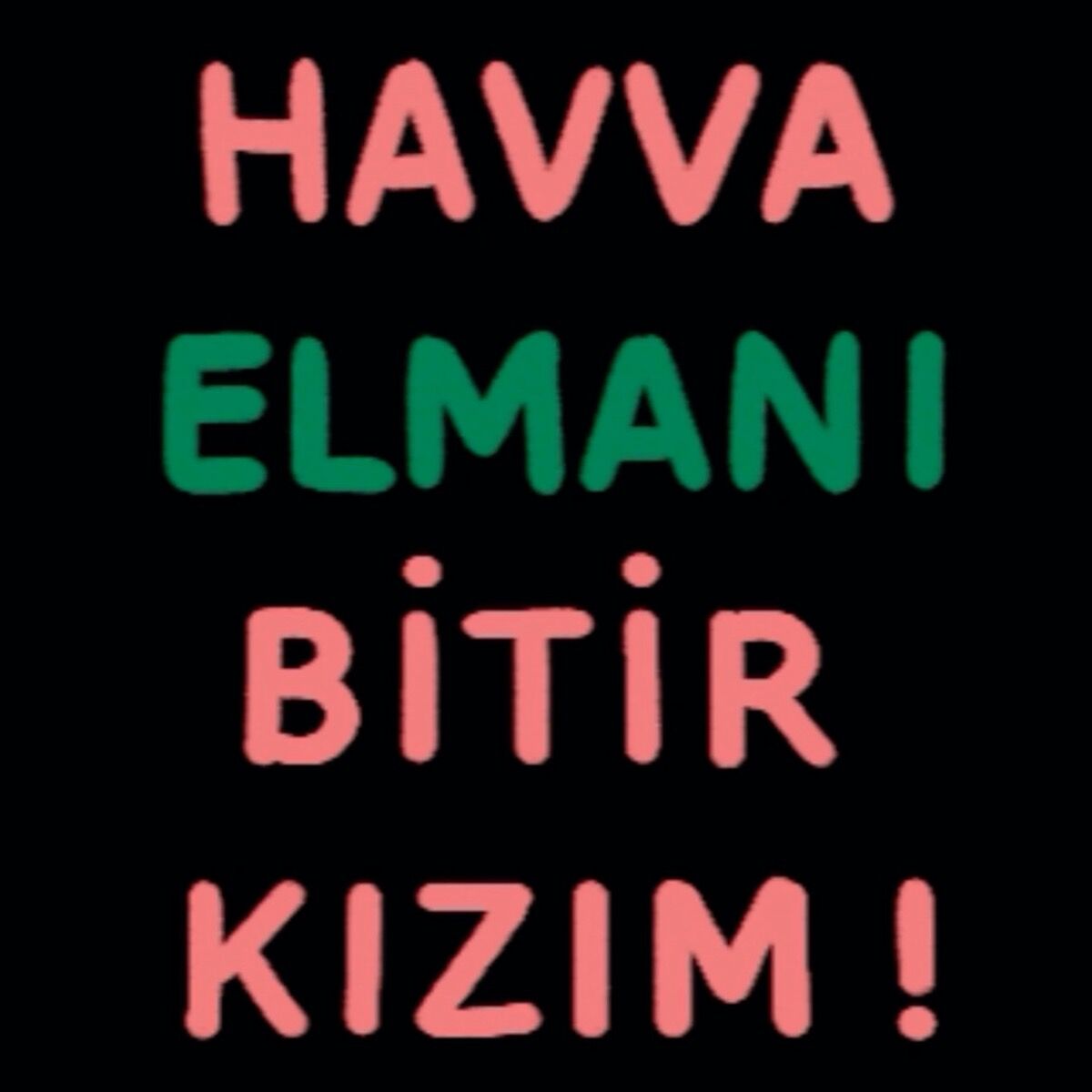 Işıl Eğrikavuk, still from Time To Sing A New Song, 2016. Courtesy of the artist. 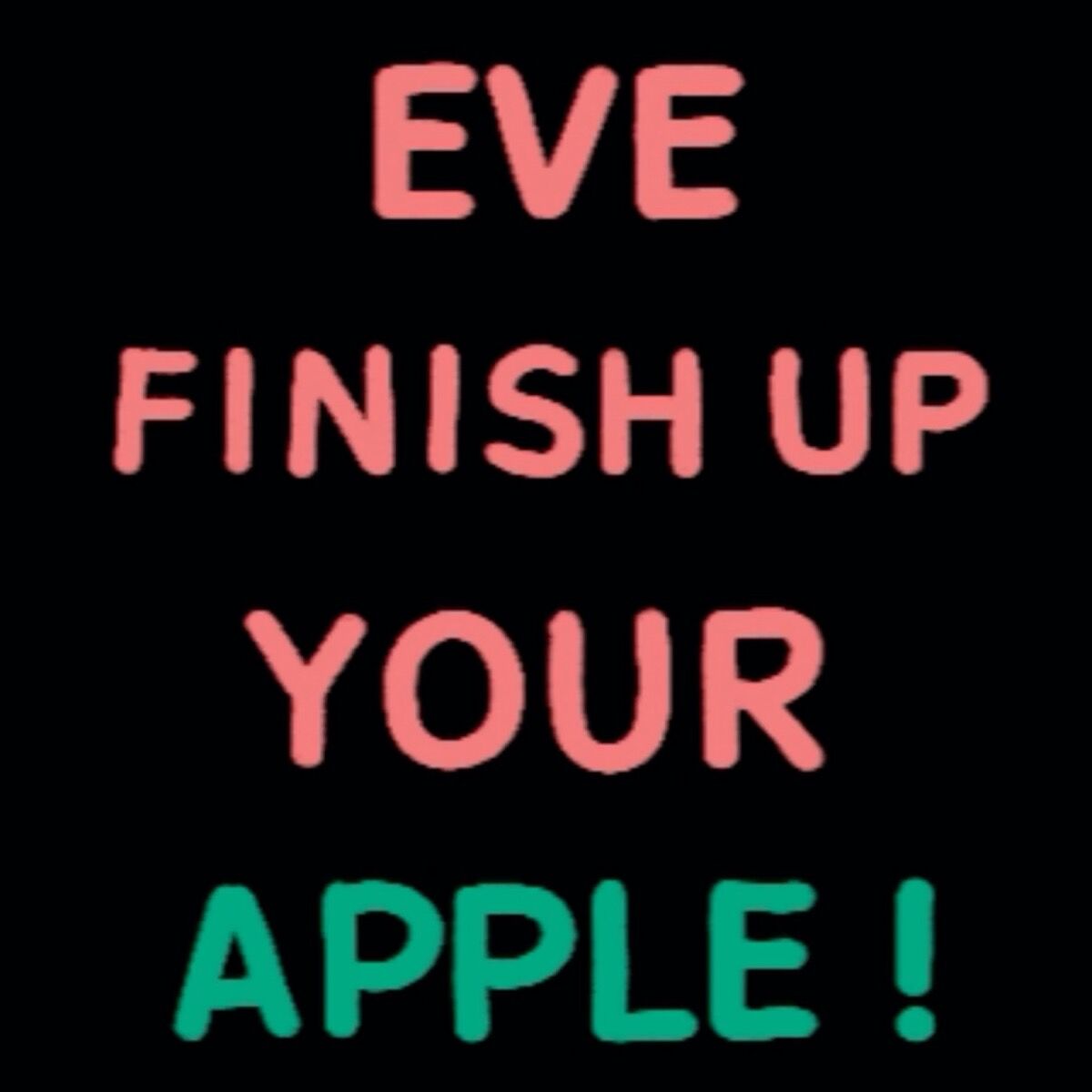 Işıl Eğrikavuk, still from Time To Sing A New Song, 2016. Courtesy of the artist.

Advertisement
Installed on top of Istanbul’s Pera Marmara Hotel, the video was taken down just after three days. The municipality allegedly claimed that it was causing visual pollution. The artist resisted and urged for an explanation from the authorities, but her petitions went unanswered. Her last resort was to produce another artwork as a reaction to the censorship. One month later in Depo Istanbul (a nonprofit art space), Eğrikavuk and her students put on a live performance that ended with one last phone call to the municipality—in front of the audience. In order to remind women to break out of the victim mentality which can easily become a trap, Eğrikavuk exhibited the two works together in the group exhibition “The Ends of Freedom” at Halle 14 in Leipzig, Germany, in 2019.
In July of this year, the brutal murder of Pınar Gültekin, a 27-year-old Turkish woman, by an ex-boyfriend also prompted outrage on social media. Women posted black-and-white selfies to protest the growing toll of femicide in Turkey and to emphasize that it can happen to anyone if the necessary laws are not brought into force. Thousands rallied in support of the Istanbul Convention, a treaty by the Council of Europe that fights for an end to violence against women.
Neriman Polat, an ardent feminist artist from Turkey, has bravely delt with human rights issues in her work for nearly 25 years. Polat is disappointed not to see more contemporary artists addressing this pressing issue of femicide through their art.
“My work becomes a way to commemorate women who were murdered, and to resist injustice,” she said. “By triggering deep-seated feelings in people, art can communicate messages more powerfully than words.” 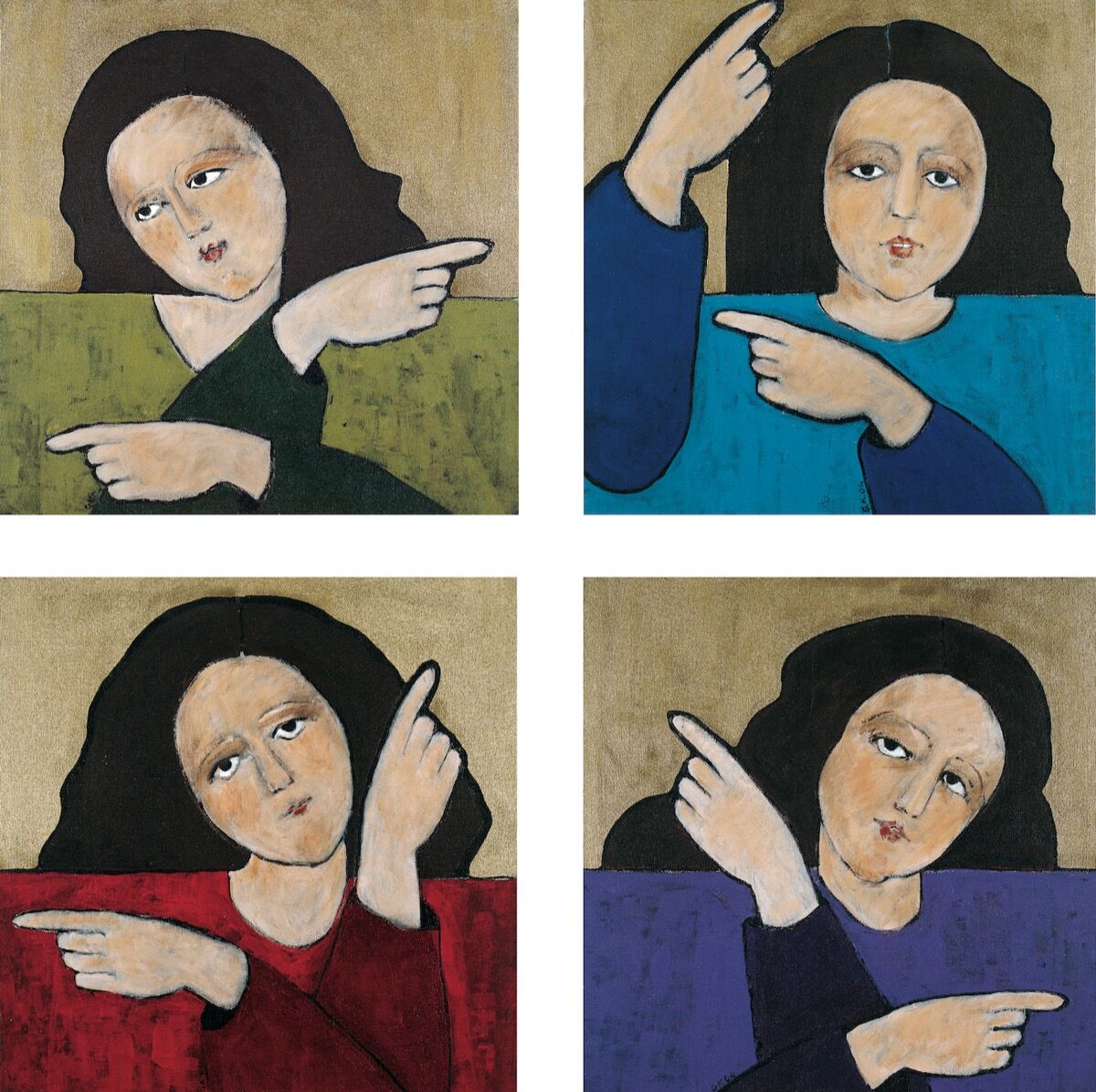 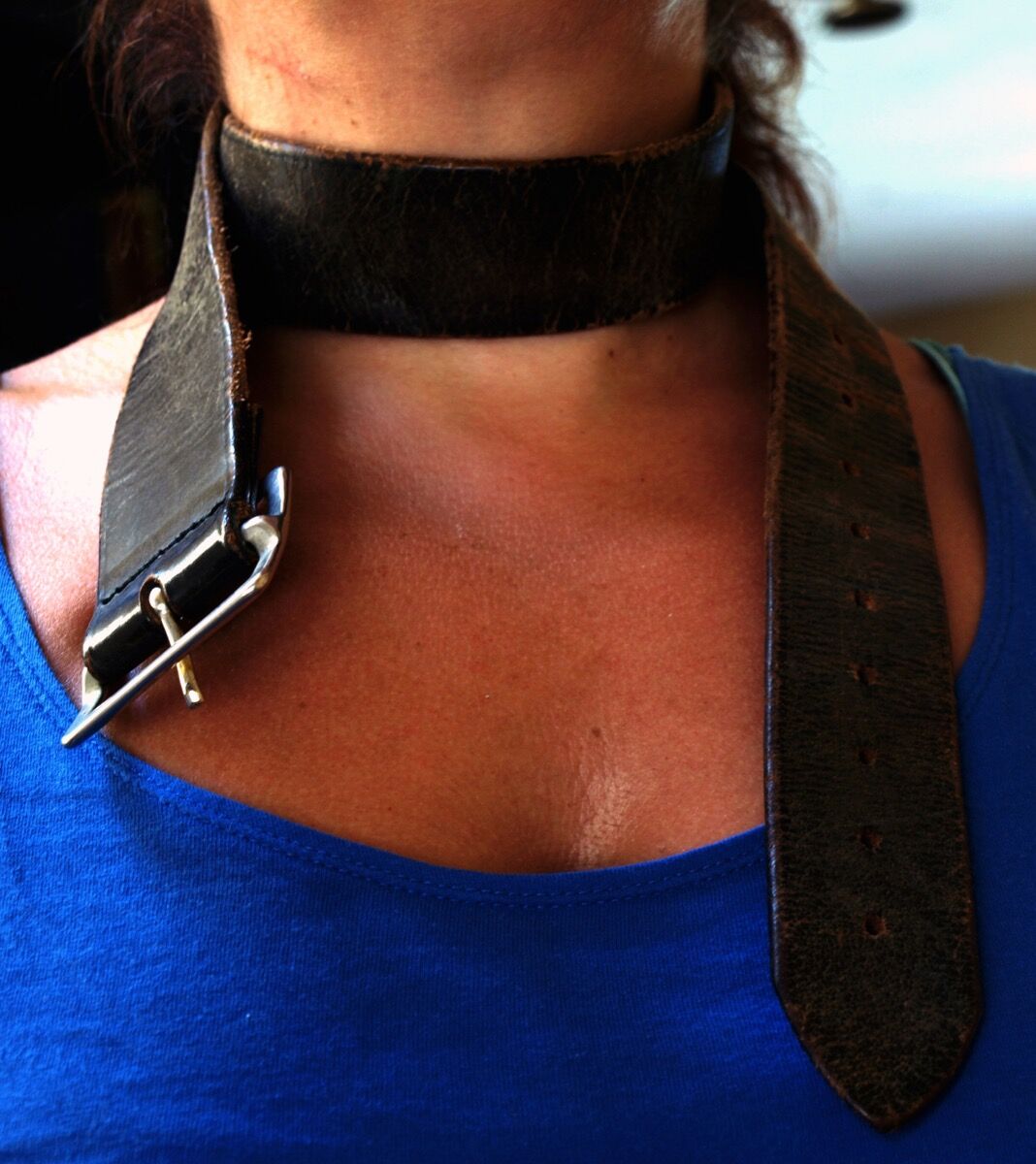 Polat believes that artistic production is critical to fighting against violence and to expressing the inequality and pressures women face in their daily lives. She also acknowledges the blunt truth that being a woman artist today, in Turkey or elsewhere in the world, is still challenging.
Gülsün Karamustafa
, one of Turkey’s most influential visual artists whose work explores sociopolitical changes in modern Turkey, said that women have always had a special role in the arts—even though they used to be fewer in number. Karamustafa has observed the increase in female artists working in Turkey, as well as their accomplishments and recognition, since the 1980s.
Having been involved in various feminist organizations in Turkey since 1970s, Karamustafa has witnessed the changing context of gender discussions, though she acknowledges that women artists have a different approach to this topic since they tell their own stories.
“We shouldn’t talk about their work as if it’s a different language,” she said. “When their unique stories meet others, together they create a vast impact that cannot be achieved through other methods.
Karamustafa also pointed out that the current debates are not just on positioning women artists in history, but also on LGBTTIQ rights. While we need certain labels to construct accounts of the past, filtering art through gender can obscure personal expression and undermine diversity.

Işıl Eğrikavuk, installation view of Time To Sing A New Song, 2016. Courtesy of the artist.

The internationally acclaimed Turkish artist
CANAN
has renounced many labels in her life, including her last name. She refuses to use surnames, which she believes are “forced” and depend on “the permission of the husband and the government” during the marriage process. Likewise, during divorce proceedings, a surname in turn becomes a symbol of “permission of the government and the gift of the husband,” she said.
Until recently, both her personal life and her art revolved around the feminist slogans “the personal is political” or “the private is political” that were popularized in the late 1960s. CANAN’s art has long questioned the governing power of institutions such as religion, government, and society on personal choices. However, in time, she began viewing empowerment as an inner act, independent from others. CANAN now endorses the belief that “personal happiness is a political act,” she said, meaning that individuals shape societies, not the other way around.
CANAN still defends equal rights and opportunities, yet she no longer categorizes herself as a “woman artist” or a “feminist.” Her view on the future resonates with Sheryl Sandberg’s famous quote: “In the future, there will be no female leaders. There will just be leaders.”
Regardless of the working definitions of feminism, or whether artists create work that can be identified as or called feminist, women artists in Turkey continue to dissect society and shake the foundations of every “sin” attributed to women since the story of Adam and Eve. In doing so, their work continues to push toward a future where all artists are simply artists.
Yasemin Elci
Related Stories