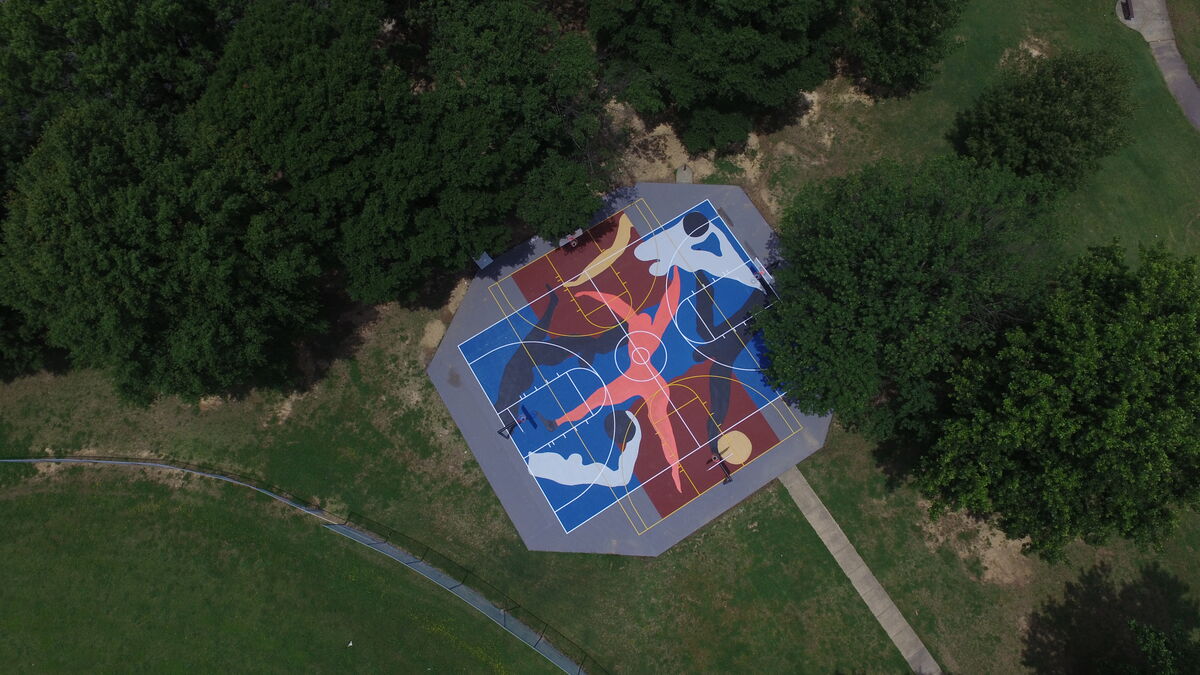 Painter William LaChance had worked on a large scale before. But when he saw an image of his next canvas, via Google Earth, he wondered if he’d bitten off more than he could chew.
The surface stretched across 175 feet of concrete in the Kinloch neighborhood of St. Louis. (For context, that’s longer than
Michelangelo
’s 133-foot-long Sistine Chapel ceiling.) There, LaChance would make his largest work to date: an outdoor painting covering three contiguous basketball courts.
“It was daunting at first, given the scale and the condition of the courts,” LaChance tells me, from his studio in St. Louis. He describes a surface perforated with cracks and weeds, where “any paint that’d been laid down in the past had become layer upon layer of colored detritus.”
Ultimately, LaChance was up for the challenge. “The prospect of turning those courts into something beautiful—and usable—was exciting,” he says. By early September, just a few months after he’d first laid eyes on the courts, LaChance had transformed the once-neglected surface into a sprawling abstract painting, where basketball players in bright t-shirts streaked across passages of vibrant color. 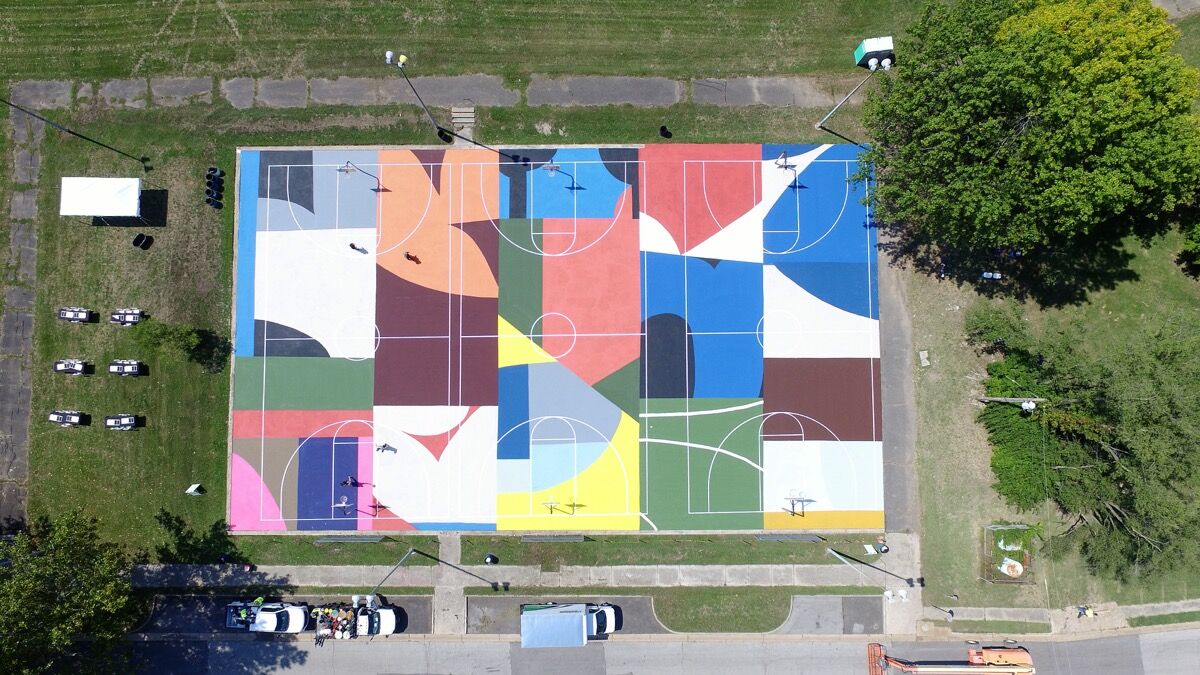 The Kinloch Park court is one of several projects spearheaded by Project Backboard, a nonprofit that refurbishes run-down basketball courts, primarily in urban neighborhoods across the United States, by covering them with art.
The effort began in 2014, when Daniel Peterson, a former college basketball player and employee of the Memphis Grizzlies’s community investment department, noticed that many public courts across Memphis were in need of repair. Their surfaces were littered with cracks and the painted lines, necessary to play a regulation basketball game, had disappeared with wear and neglect.
Peterson began tackling the problem by applying simple fixes himself: “At first, I was just painting black or white lines on asphalt: the three-point line, the foul line, out-of-bounds,” he explains.
Though as he discovered more dilapidated courts, and became increasingly comfortable with his materials—primarily plexipave, a paint which fills cracks as it’s applied—an idea began to emerge. “I thought, ‘I’m already out here working in these parks, so how can I add something interesting and unique to these courts that will excite the community about visiting and playing on them?”
His answer was art.
Peterson didn’t have a background in art when he began Project Backboard. “There was no one at my high school or my college who was an athlete and an artist who I could look up to—who was a model for connecting those pieces,” he says. But when he got wind that a local Memphis artist, Anthony Lee, had been commissioned by the city to design shade structures next to a court in Pierotti Park, he began to bridge art and basketball himself. 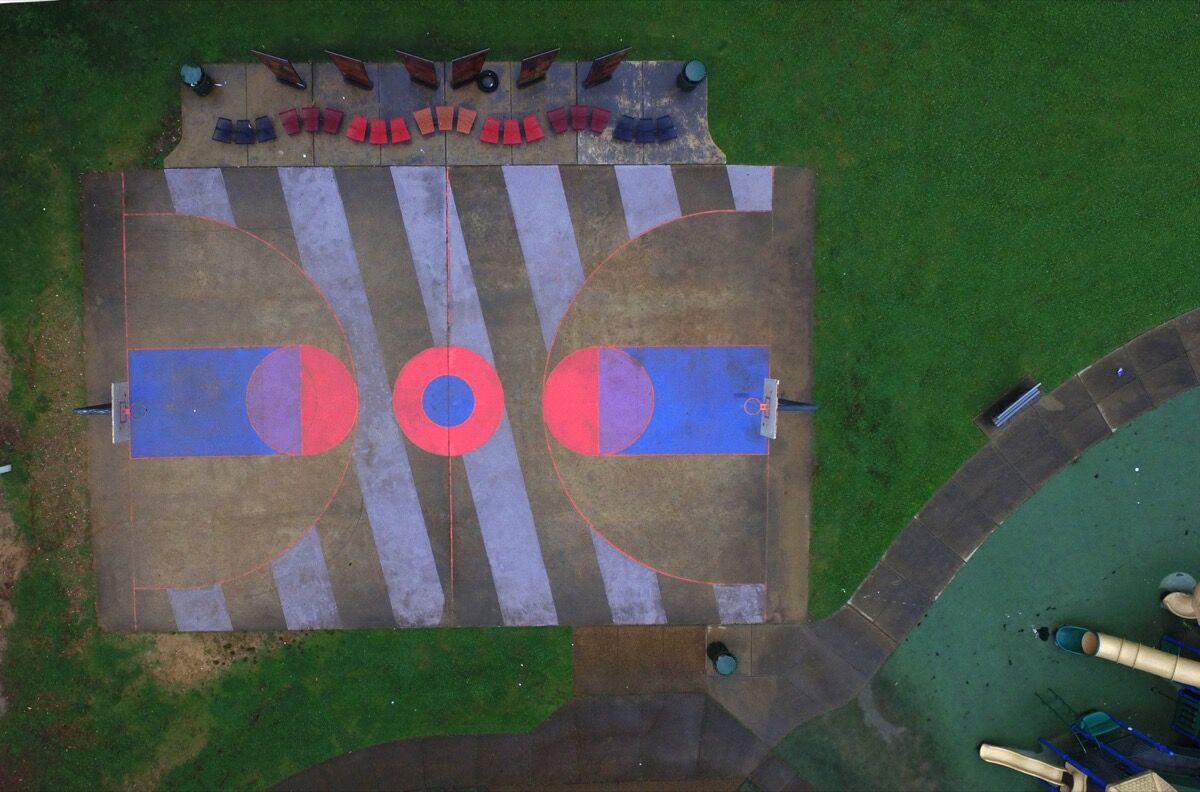 Advertisement
To Peterson’s surprise, the court lacked lines—and the city had no plan to paint them. In response, he asked Lee if he’d be open to working on the surface of the court itself as well. Lee jumped at the opportunity, Peterson recalls. Together, they replaced gray asphalt (where a single, wobbling line of spray paint had once been applied to mark the three-point line) with circles and lines filled with deep pink, cobalt blue, and purple paint.
The collaboration marked Project Backboard’s launch, and the organization has grown steadily under Peterson’s direction since. Through partnerships with artists, funding amassed via grants and private donations, and support from local volunteers, the nonprofit has refurbished courts in Memphis, St. Louis, and Los Angeles, with plans for upcoming projects in Baltimore and New Rochelle, New York.
Part of Peterson’s goal in joining art and basketball is “to help people understand that they don’t have to be just one type of person—an artist or an athlete—they can be both,” he explains. He also sees the courts “as a canvas for creative expression” used to “strengthen communities and inspire multi-generational play,” as the organization’s mission states.
While these are ambitious aims, Peterson has begun to make headway towards achieving them.
At another court in Memphis, he worked with local artists to paint backboards that had previously been coated with ads for sugary soft drinks, like Dr. Pepper. And for a court in the city’s Chickasaw Park, Peterson recruited New York-based artist
Nina Chanel Abney
, whose paintings he first encountered in former NBA player Elliot Perry’s art collection. 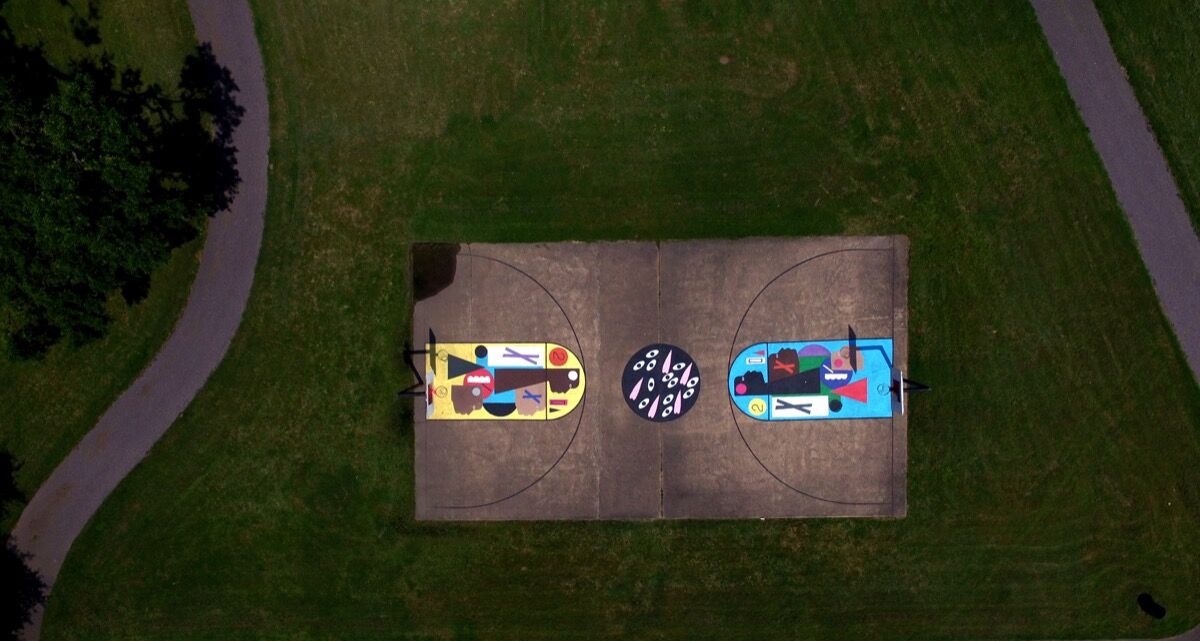 For the project, Abney translated her studio work—which explores politics, race, gender, and contemporary culture—into a design that conveys basketball’s broad appeal and the democratic nature of a public court. Graphic symbols and big, bold silhouettes rendered in a variety of skin tones—black, white, and brown—cover the asphalt and backboards alike.
LaChance’s painting for the Kinloch Park courts is Project Backboard’s most recent effort—and it evidences the organization’s expansion, both geographically and terms of scope and scale. It is Peterson’s first project in the Midwest and, to his knowledge, the largest “art court” in the country. (Last year, Nike commissioned Kaws to paint two adjacent courts on New York City’s Lower East Side; The Kinloch project comprises three.)
The Kinloch courts have drawn attention, not just for the massive scale and eye-catching design, but also the location.
Kinloch borders Ferguson, the St. Louis suburb that is widely known as the site of unarmed black teenager Michael Brown’s killing by a white police officer in 2014 and subsequent Black Lives Matter protests. Kinloch itself has been described by several news outlets as an impoverished, struggling community. In 2010, local newspaper Riverfront Times called it “The Saddest City In St. Louis County.” In 2015, Vice News headlined a story about Kinloch as “The City Next to Ferguson Is Even More Depressing.”
Many of the courts that Project Backboard refurbishes are located in poor communities, where public funding is lacking, and, as Peterson explains, “where public parks and basketball courts have not been attended to, and are in complete disrepair.” 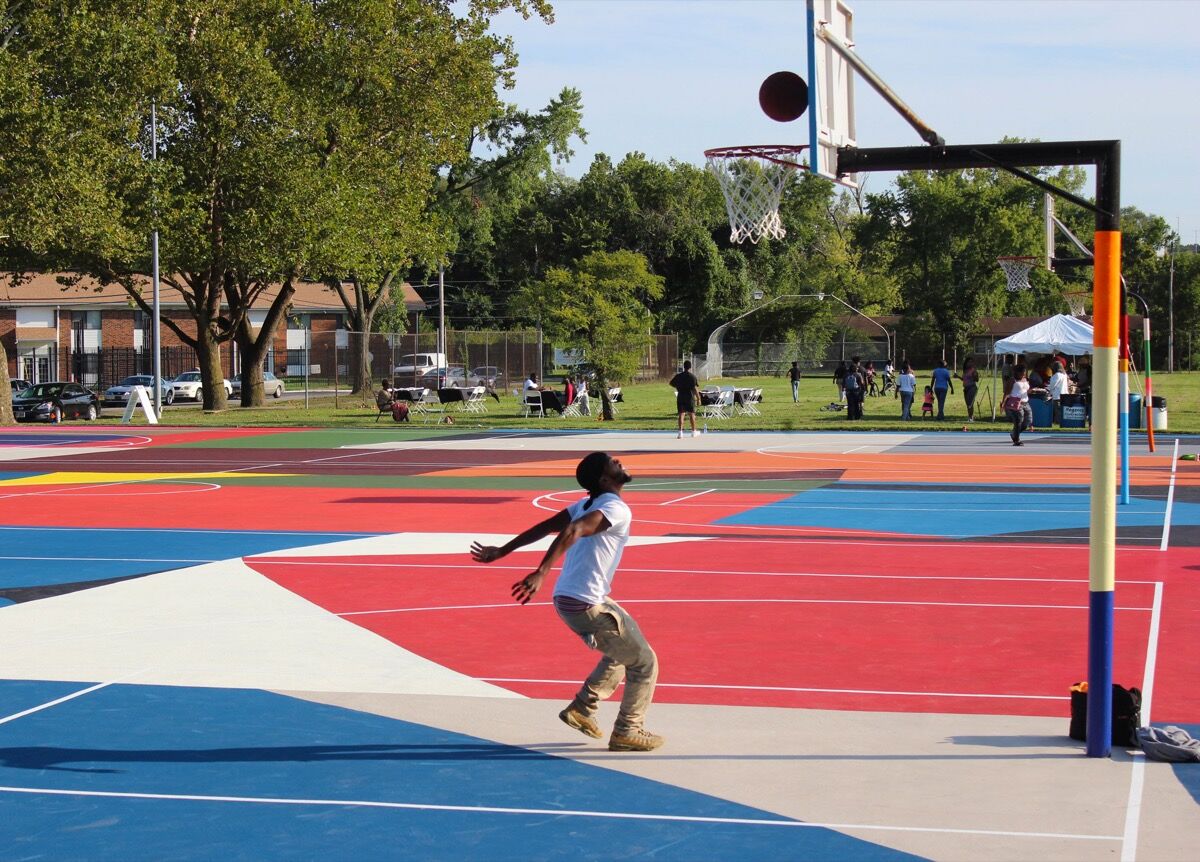 While Peterson acknowledges that refurbishing basketball courts is a small step towards improving public life in these areas, he hopes it will inspire other similar efforts. “The functional side of this project is about actually making the surface playable,” explains Peterson. “But the art side exists to create the energy and excitement that’s going to cause this park to actually become a center of community interaction—it’s the glue that brings everyone together around a court.”
He envisions the courts attracting a broad range of people, from basketball players to families. “Dads shoot hoops with their daughters, people have picnics, read books, and watch people play on the courts because it’s lively and vibrant,” he muses.
While this vision may seem utopic, Peterson has already seen the Kinloch community rallying around the new and improved courts in their neighborhood. Throughout the installation process, many local volunteers—neighbors who glimpsed the project as they passed by the park—pitched in to help, returning with rollers and brushes.
“I know that it’s those folks who will continue to look after the park after I’m gone,” says Peterson. “They’re the ones who will pick up the trash that accumulates by the fence, or call the parks department if there’s a tree that needs to be cut. They’re the people who are going to make the court become more than just a work of art, but a really functional piece of a vibrant community. “ 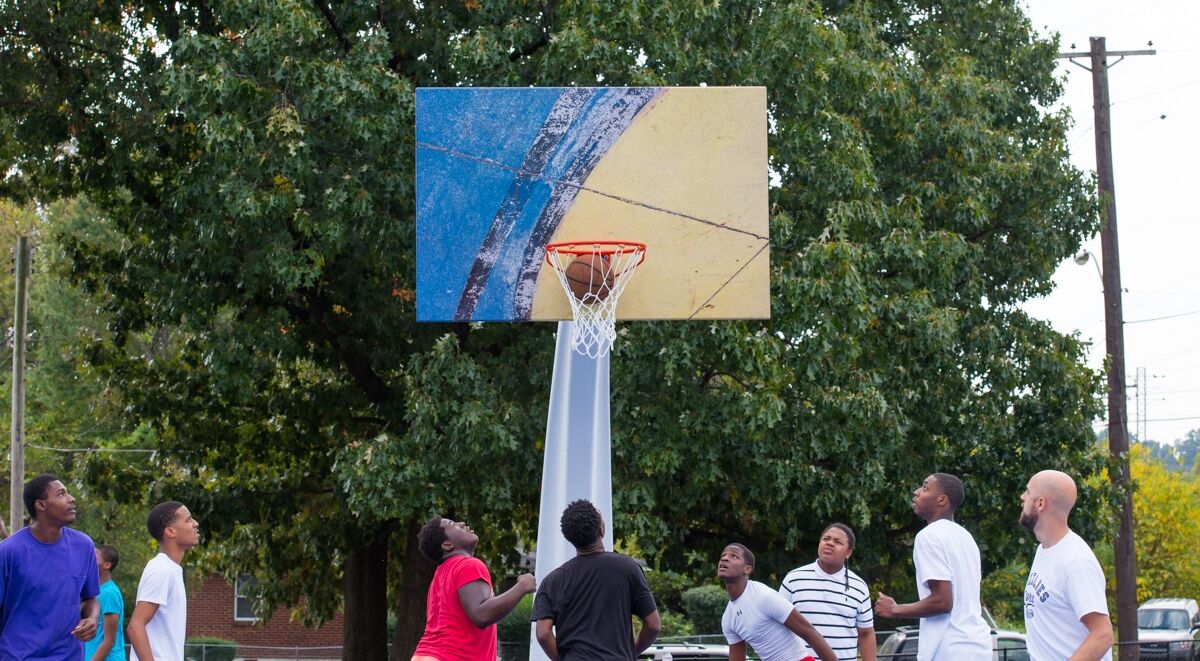 When the refurbished Kinloch courts opened on August 25th, they were flooded with residents. “The most striking thing was how across-the-board positive people were,” remembers LaChance. “It’s a huge abstract painting that wasn’t there the week before, and it’s hard to imagine people not having differing opinions, aesthetically at least, about it. But everyone was just so excited. They loved it.”
The best praise he received for the project didn’t come from news outlets or arts organizations, but from locals. “One guy said he felt like he was on a Spike Lee movie set, and another kid asked if I could paint his shoes to match the courts,” remembers Lachance. “Those are the biggest compliments I could have received.”
Alexxa Gotthardt
Related Stories