This Artwork Changed My Life: Lorenzo Ghiberti’s “Gates of Paradise” A detail of Lorenzo Ghiberti's Gates of Paradise adorning The Baptistry of Saint John (also known as The Florence Baptistery) shows Moses receiving the Tables of the Law from God. Photo by Lucas Schifres. Image via Getty Images.

Elephant and Artsy have come together to present This Artwork Changed My Life, a creative collaboration that shares the stories of life-changing encounters with art. A new piece will be published every two weeks on both Elephant and Artsy. Together, our publications want to celebrate the personal and transformative power of art.
Out today on Elephant is Sukayna Powell on Agnes Denes’s Wheatfield—A Confrontation. 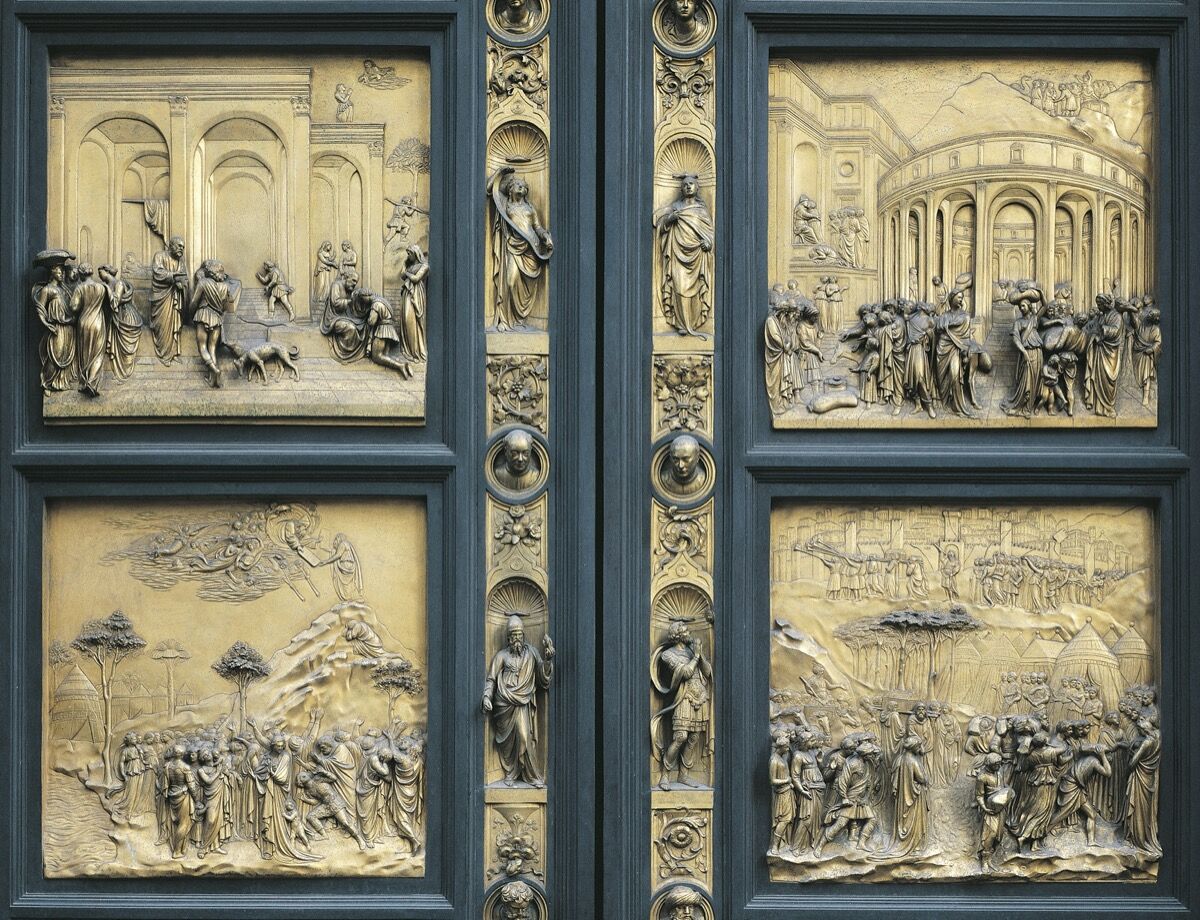 I was a bookish and kind of nerdy 15-year-old in suburban Pennsylvania when a cataclysmic flood made a muddy mess of Florence in 1966. The stories and photos in the National Geographic and Life magazines that arrived in my parents’ mailbox transported me there in my adolescent imagination. When I viewed a black-and-white documentary on PBS, directed by Franco Zeffirelli and narrated by Richard Burton, it sealed the deal. The dramatic efforts of the “mud angels” and the restorers who peeled frescoes off moldy church walls and fished polychrome sculptures out of dark and oily waters in Florence’s flooded streets moved me. Theirs, I concluded, was the coolest job in the world, and that is what I would one day become.
The following summer, during my family’s first grand tour of Europe, I was allowed to make a detour on my own to meet a friend, Domenico Pasquale, who was studying at the University of Florence. As an AFS host family, we had welcomed many students from abroad into our home, including Domenico, who was on his way to university when we met him. 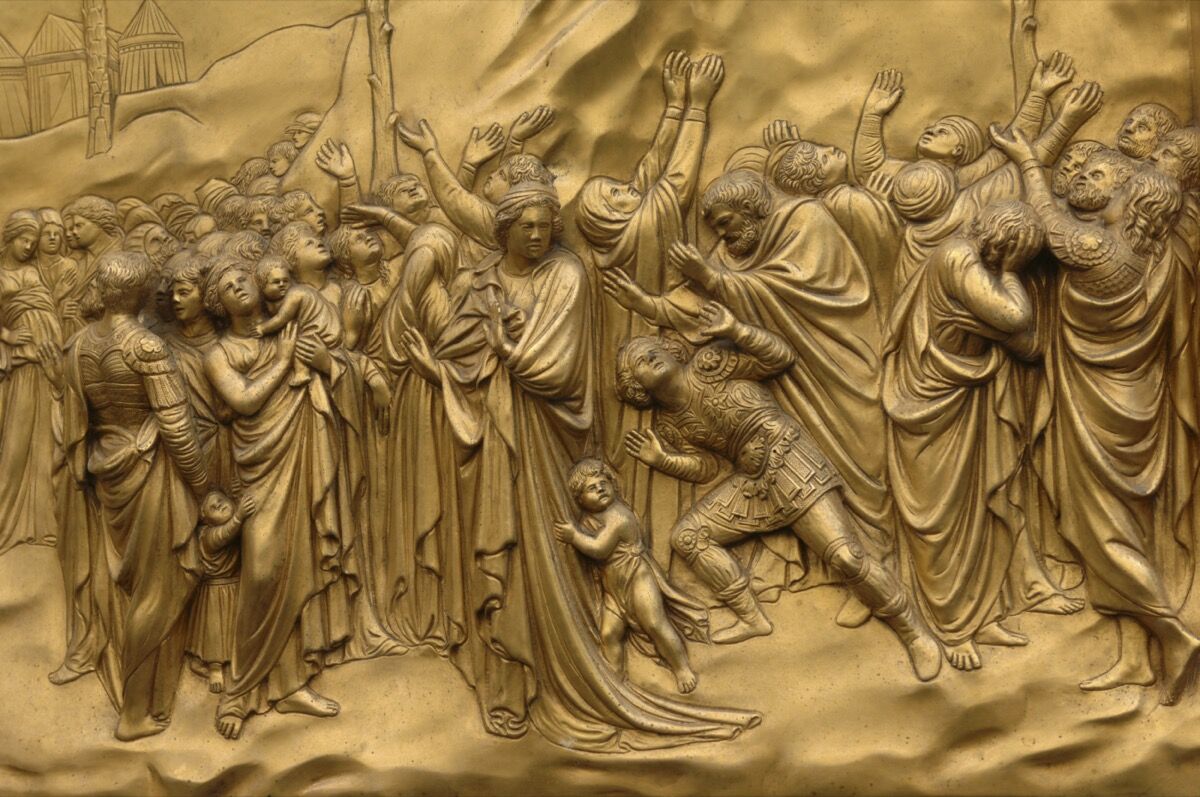 Advertisement
Telegrams (telegrams!) were exchanged to make absolutely sure that Domenico would meet my train from Rome. And there he was, the blue-eyed Domenico, wrapped in a cloud of cigarette smoke, with his big welcoming smile, searching for me to descend from a second-class coach at the Florence station. Walking into Florence, arm-in-arm with my friend, toward my first glimpse of the bell tower of the church of Santa Maria Novella, was for me like Dorothy landing in Oz. During that summer of 1967, I entered the Italian
Renaissance
for the first time.
Domenico gifted me a hardback guide to the city, and with it in hand, we explored the city together. At age 15 I knew who
Leonardo da Vinci
and
Michelangelo
were—as I’d read some Time/Life books on their lives—but not much more. Our strolls through Palazzo Pitti and the Uffizi enthralled but overwhelmed me. I was attracted to a handsome male portrait by
Titian
, and I was thrilled at the sight of my first
Botticellis
. But when my eyes finally came to rest on a victim of the flood of the year before, I was home. “Michelangelo called these the bronze doors the Gates of Paradise,” Domenico told me as we arrived at the Baptistery. That was enough of a seal of approval for me. 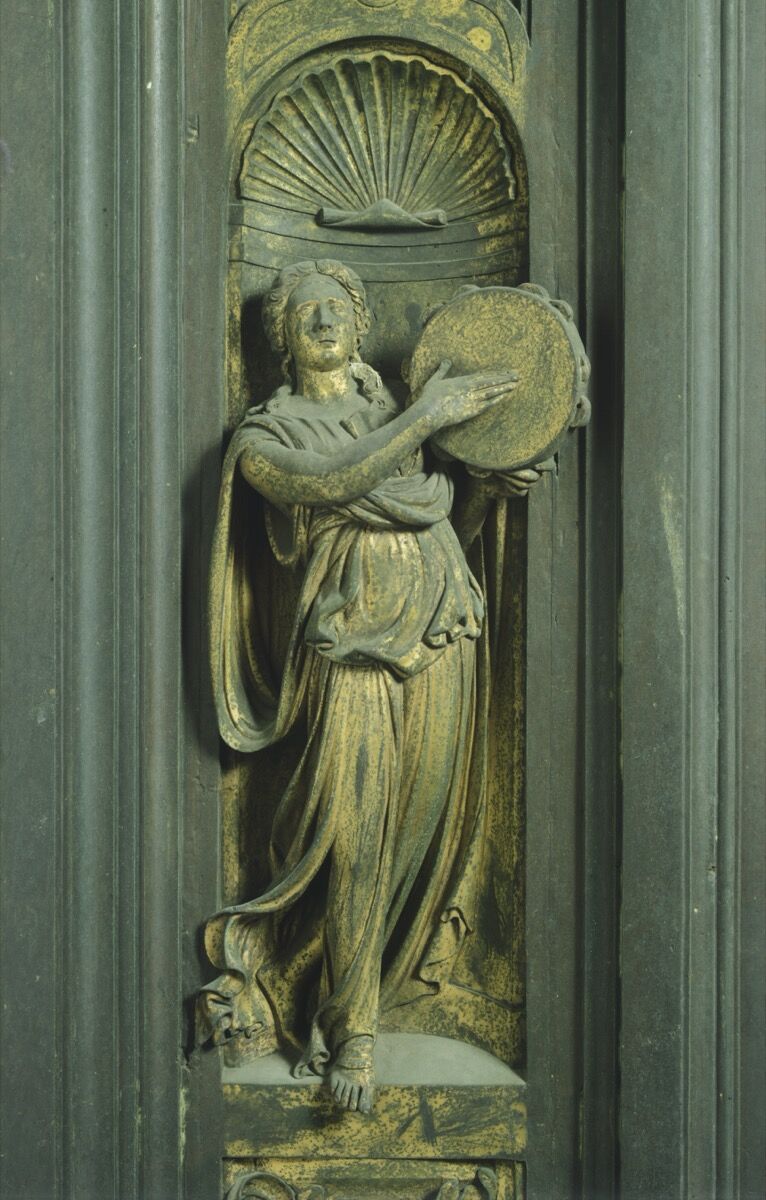 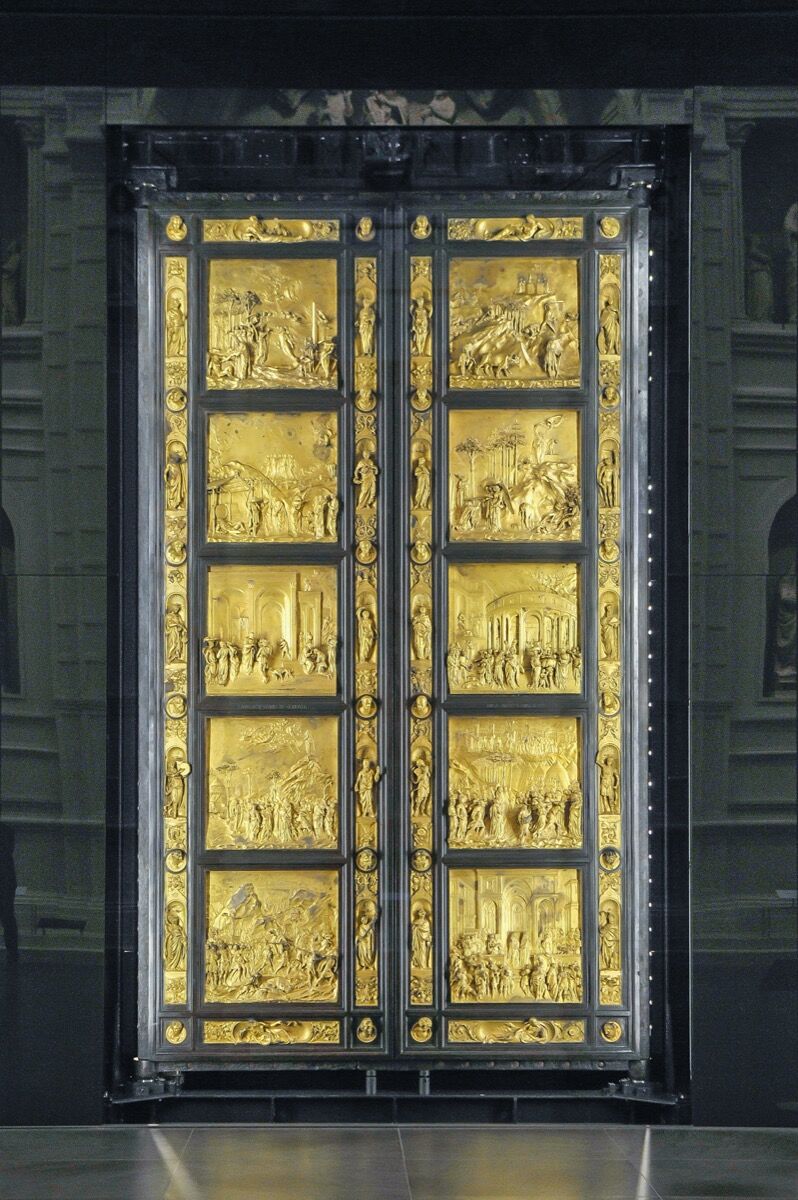 A view of the Gates of Paradise or East Doors made by Lorenzo Ghiberti is displayed on December 6, 2019 in Florence, Italy. Photo by Laura Lezza. Image via Getty Images.

Standing before the doors, I was awed by their soaring height, the magnificence of their intricate craftsmanship, and the fascinating combination of low-relief, finely drawn, linear shapes in the background, contrasting with the foreground figures that were fashioned in such high relief that they seemed to stand proud from the background. Through centuries of tarnish and pollution, the biblical scenes were still legible, as complex narratives of Old Testament stories as interpreted by sculptor
Lorenzo Ghiberti
, who spent 27 years in the mid–15th century working on his masterpiece. From Adam and Eve in the Garden of Eden to the stories of Moses and Noah, Ghiberti covered a lot of territory, fashioning bronze, like a fine jeweler, into gleaming metallic flesh.
During the flood, the intensely raging waters forced the doors open, knocking off 5 of the 10 panels and loosening a sixth. They bashed back and forth against the exterior iron gate, which luckily caught them, allowing them to be buried in a pool of mud. When I first viewed the doors, only four panels were on display. Then came the realization: What I loved most about this masterpiece was its neediness in its diminished state. It needed a skilled someone to return it to glory. Someone like me. 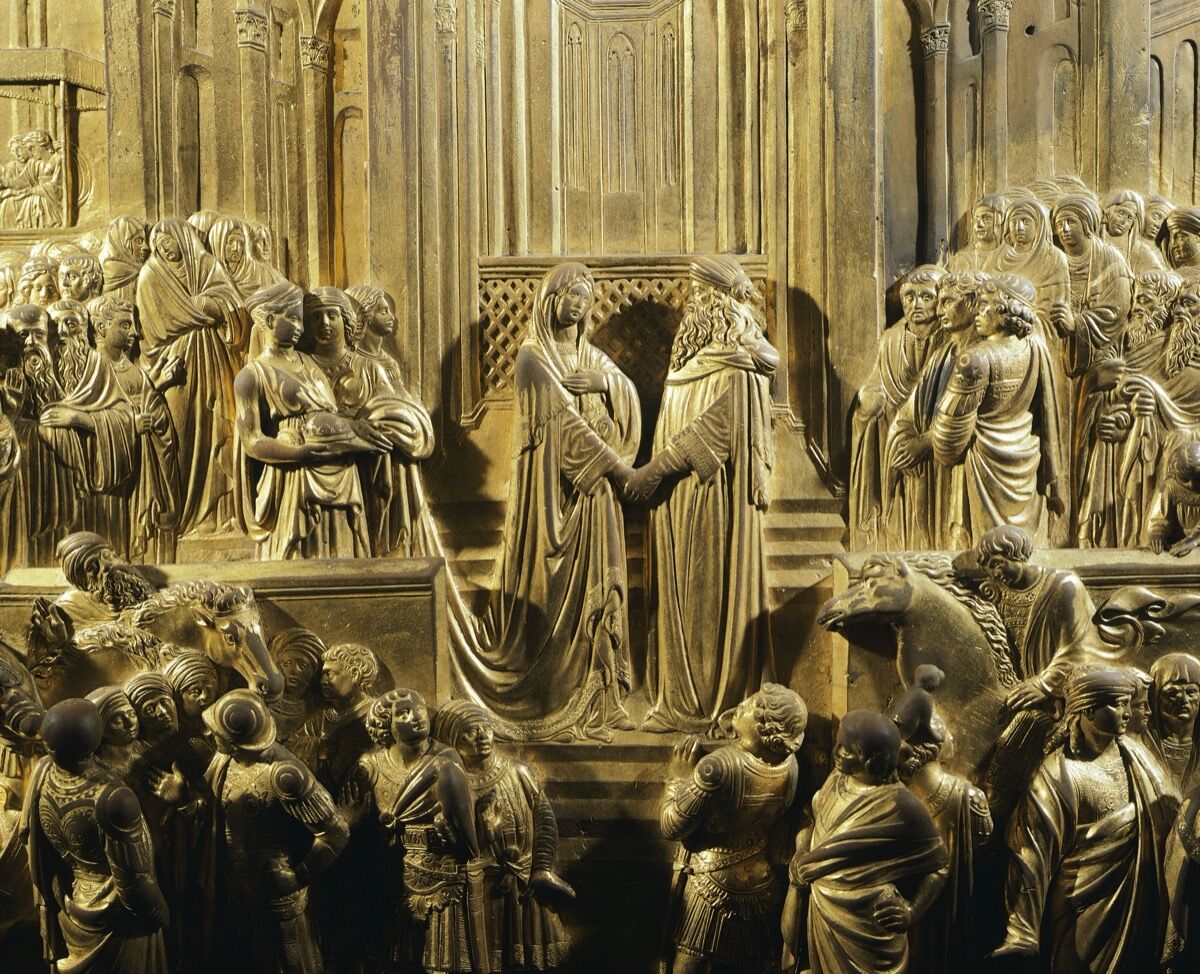 Solomon and the Queen of Sheba, detail from Stories of the Old Testament by Lorenzo Ghiberti, Gates of Paradise, Baptistery of San Giovanni in Florence. Photo by DeAgostini. Image via Getty Images.

For several subsequent summer evenings we sat on the steps of the Duomo, our backs to
Brunelleschi
, and contemplated what was left of the Gates of Paradise, while drinking Chianti from a bottle and smoking Gitanes. A decade would pass before I started a long and winding path toward becoming that person. I began my journey in grad school in Florence as an older and somewhat wiser 26-year-old. I had absorbed some art history knowledge and was ready to tackle chemistry classes in Italian in the villa where Boccaccio had written The Decameron.
The romance of those adolescent summer days—inseparable from my first guy-crush on the kind-hearted Domenico—had stayed with me. The 1967 Florence in its wounded state, with high-water marks clearly visible on still-muddy walls around the city, had been like a cocoon waiting to reveal the brilliant butterfly inside. It was clear to the adolescent me that Florence would have another Renaissance. I ached to be a part of it, and as a graduate student, I plunged in.

Artsy and Elephant are looking for new and experienced writers alike to share their own essays about one specific work of art that had a personal impact. If you’d like to contribute, send a 100-word synopsis of your story to [email protected] with the subject line “This Artwork Changed My Life.”
Will Shank
Related Stories

This Artwork Changed My Life: Barbara Kruger’s “Untitled (Your body is a battleground)”
Advertisement
Further reading in Art