Artsy Editors
May 26, 2016 11:19am
It’s mid-May 2015, a little before 5pm. A man pushes open the glass double doors of Ho Chi Minh City’s Vin Gallery and steps inside. He curtly confirms with the gallery receptionist that the works of art assembled before him are intended for an exhibition, then makes a call. (Staff later recall that he had done this a few days earlier when pretending to be a customer.) Another six men enter. 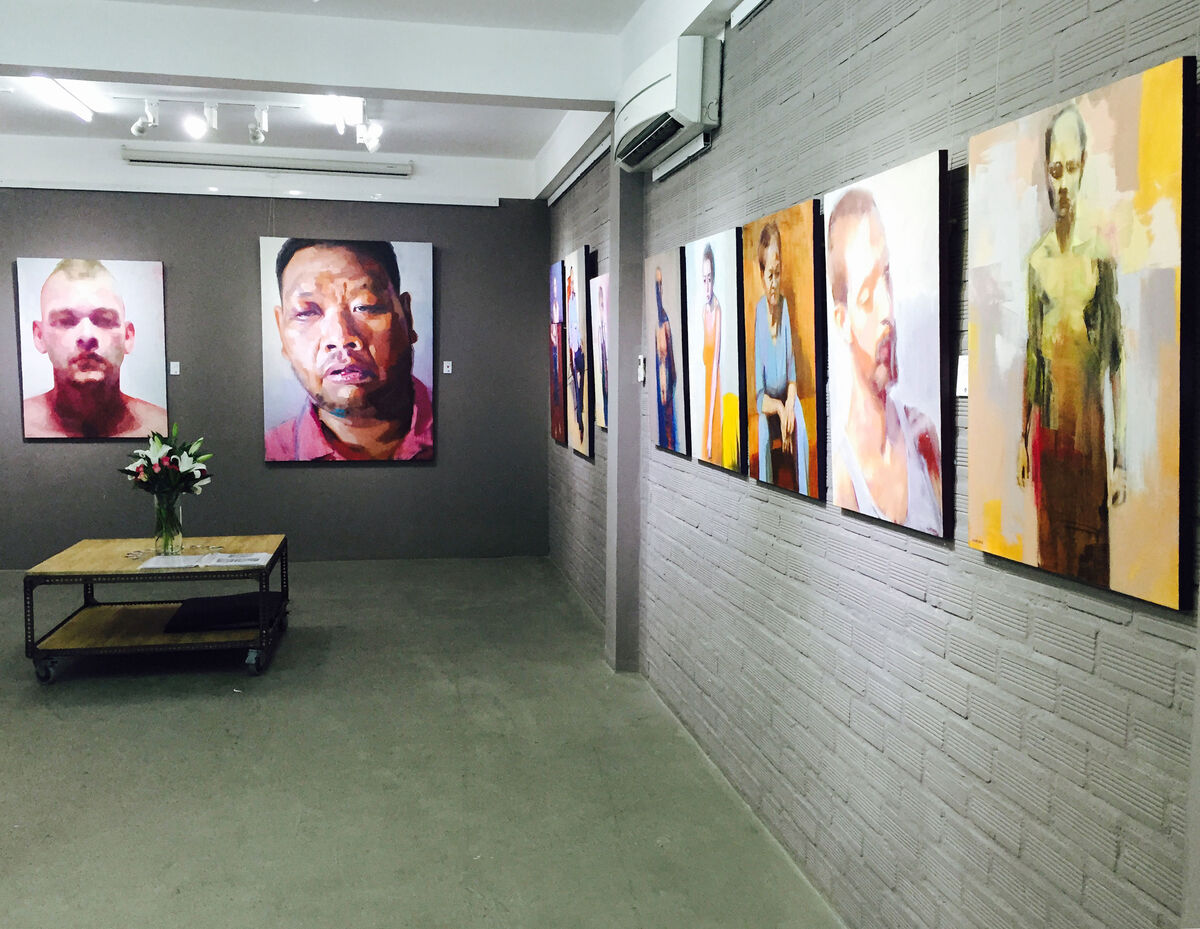 Installation view of Will Whitehouse’s “Figures in Time.” Courtesy of Vin Gallery.

It’s a few minutes until all seven men file out, one holding the heavy door while the others carry off six of the 32 paintings scheduled to open Will Whitehouse’s show, “Figures in Time,” the next day. But this isn’t the work of opportunists, or art thieves. This isn’t even unlawful—quite the opposite. The men are the Cultural Police.
Eventually, the paintings were returned. But only after a convoluted series of steps involving a visit by gallery staff to the local department of the Ministry of Culture, a review of the six innocuous nudes by a panel of Vietnamese art academics, and the payment of an indirectly attributed fine (for a banner outside that breached a rule on public advertising).
A year later, as President Obama tours Vietnam in a trip set to further the U.S.’s diplomatic warming towards Vietnam, government control over artistic expression here carries on. At a townhall meeting just miles from Vin Gallery on Wednesday, prominent Vietnamese rapper Suboi asked the President how important he thinks it is “for a nation to help and really promote their art and culture?” Perhaps knowingly, Obama replied, “If you try to suppress the arts, then I think you are suppressing the deepest dreams and aspirations of the people.”
To understand how it is that the police can seize works of art the day before a show opens, one needs to understand the climate around contemporary art in Vietnam. Gallery licenses in Vietnam allow for a strictly defined scope of art-related services. Showing and selling work is allowed. However, temporary shows and opening nights are not, despite being an essential part of a gallery’s ability to successfully promote their artists and sell art. Every show needs a permit, but the process to obtain one takes anywhere between a few weeks to three months.
Often, a permit is only granted on the day of the opening, or, as often, not at all. The procedure requires identity checks of the artist and a full inventory of the works that will be shown. The latter is particularly stifling of artists’ customary late flurry of pre-show activity. Any artworks created after the permit application is submitted can’t go in the show. Richard Streitmatter-Tran, A Short History of Man and Animal (2015). Collection of the artist.

Advertisement
Richard Streitmatter-Tran knows about the iniquities of cultural control in Vietnam firsthand. The artist and co-founder of contemporary art space Dia Projects (on Ho Chi Minh City’s Dong Khoi street) was blacklisted from participation in shows here from around 2006–2012. Since both inclusion on and removal from cultural blacklists aren’t preceded by an official announcement, he says it’s hard to know exactly when and why he fell afoul of the authorities and when the ban was lifted. During that time he existed in an awkward limbo: He produced work in Vietnam, but for the most part could only exhibit overseas.
Galleries sometimes circumvent the process of obtaining a permit by mounting shows without it. “It’s a challenge to provide the necessary documentation if the work is improvised, or if it’s site specific and has to be installed,” explains Streitmatter-Tran, talking about work like his A Short History of Man and Animal (2015). The piece had to be built on-site in the days leading up to the show, as it will be again for the upcoming “Odyssey: Navigating Nameless Seas” exhibition at the Singapore Art Museum (June 4 –Aug. 28, 2016). “It's like having to produce a chicken when you only have the egg,” he says.
Some galleries do this by avoiding red flag terminology like “exhibition” and “opening.” They can call the show a “showcase” or a “private event” for example, or just restrict invites to a honed guest list to stave off unwanted attention. Still, a supposed breach of decency or semantics—every item not being available for sale at the “showcase,” or a “private event” garnering too much public attention—can be used to close a show, or cause pieces to be removed, as happened with the Will Whitehouse exhibition. 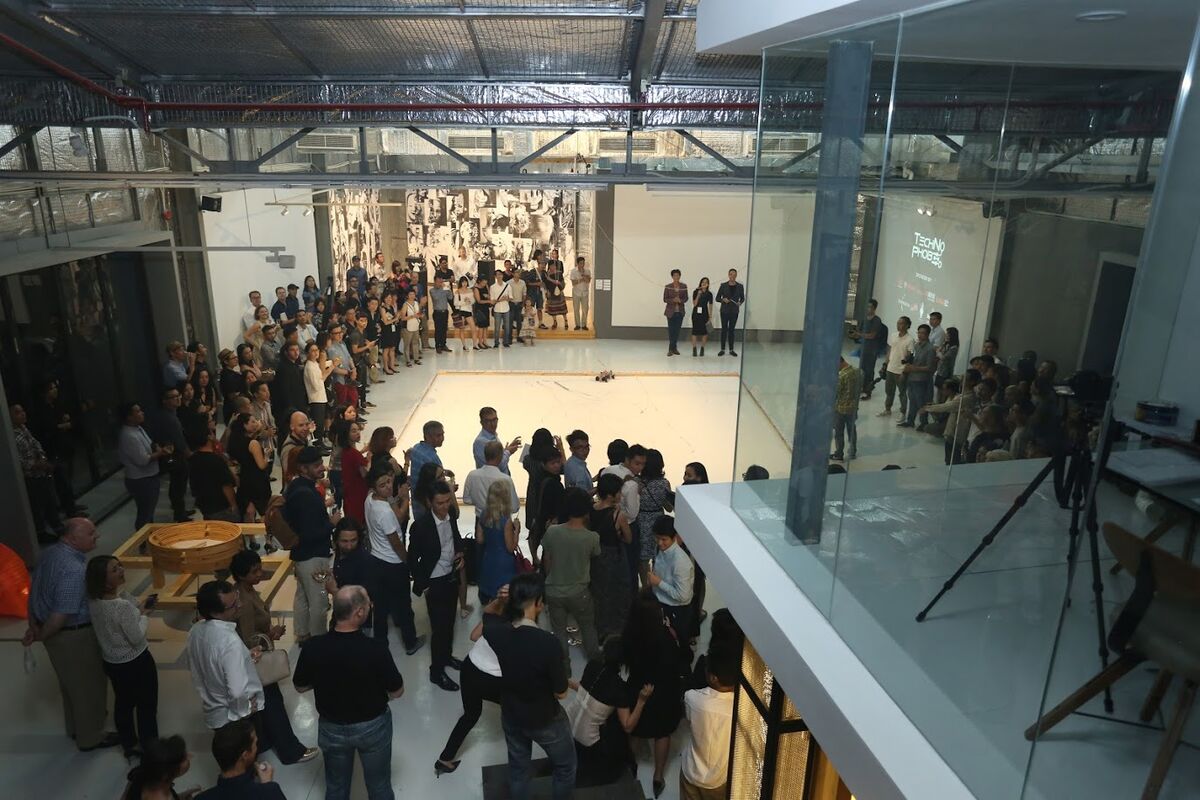 The opening of  “TechNoPhobe,” courtesy of Factory Contemporary Arts Centre.

Earlier this month, a show called “TechNoPhobe” closed at the cavernous new Factory Contemporary Arts Centre, which is a short circumnavigate across District 2 from Vin Gallery. It ended with ominous empty spaces where Thierry Bernard-Gotteland’s sound installation used to be. “There are just general rules, nothing specific, which means there are millions of ways to cross the invisible line,” says the centre’s Arts & Events Coordinator, Bao Le, of the regulations that they continuously have to stay ahead of.
The process is made all the more tiresome by the necessary frequency of exhibitions in Vietnam. While western galleries typically operate on a six-week exhibition schedule, galleries here often mount three or four week-long shows. That is due to a still-nascent market in which only around 5% of works from any exhibition tend to sell, according to those I spoke with. Considering the potential three-month turnaround for the permit, this means that galleries which conform are constantly submitting permit applications (more than one can be processed at a time) and scheduling shows very far in advance to reach a sustainable number of exhibitions to support their business.
Sales lean towards foreign buyers. That’s partly because art education in Vietnam is time locked by a curriculum developed in the 1920s. The curriculum tips towards the decorative arts and the persisting dominance of the Vietnam Fine Arts Association, which many see as just as outdated. “In art class at my school, the teacher drew the sample. You copy. They assign a grade. That’s it, no expression, no creativity or critiques,” says Bao Le. “The Factory is 100% privately funded by Vietnamese” says Bao Le, “and a lot of foreign cultural institutions have visited and talked about support, but zero Vietnamese funds or universities. No one cares.”
Unusually, Bao has spent her entire life in Vietnam. But most of the cultural development here is incumbent on young Vietnamese studying abroad, engaging with the arts globally, and returning home with an urge to open up new spaces or engage in creative work. “I wanted a space to flesh out concepts and ideas. As it turned out, that was a bit idealistic,” says Dia Projects’ Streitmatter-Tran. I ask Bao Le too, if her gallery was aware of the difficulties of showing contemporary art before the Factory opened. “Absolutely. We were fully aware,” she says finally. “We thought, if we don’t do it now, then who’s going to do it? And when will they do it—in five years, 10 years, maybe never?”
—David Kaye
Related Stories