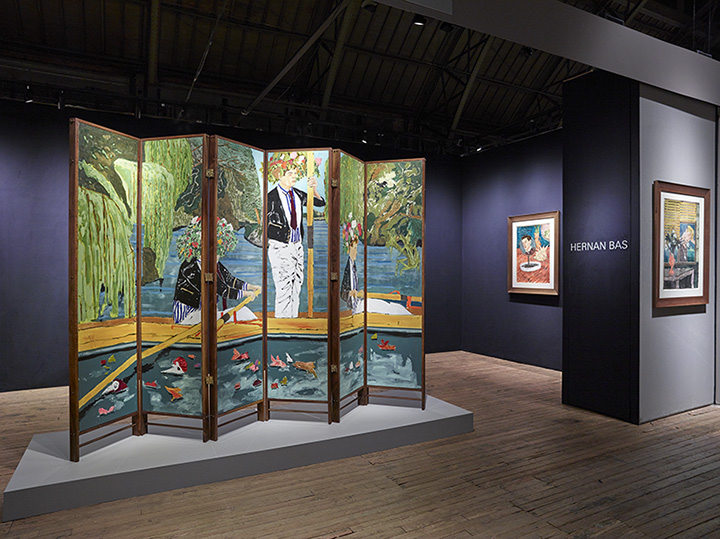 Just hours before the 2016 edition of the Art Dealers Association of America’s fair The Art Show opened to VVIPs on Tuesday, ADAA’s recently appointed president Adam Sheffer answered the question he may not have wanted to tackle: How will the uncertain art market affect this year’s fair? “If the market is settling into a sort of responsible, slower pace, then so be it … but there’s nothing wrong with the art,” Sheffer told me as we sat in the Cheim & Read booth, surrounded by four new stacked sculptures by
Ron Gorchov
. Hours later, as a crowd of prominent collectors—Eli Broad and Steve Martin reportedly among them—museum professionals, and Upper East Siders filtered into the Park Avenue Armory for the vernissage, the early numbers seemed to assuage said uncertainty.
Michael Rosenfeld Gallery attracted private and institutional collectors and curators, and finished the day with a $450,000 sale of one of their
Beauford Delaney
paintings; Lehmann Maupin reported “strong sales throughout the preview” on paintings by
Hernan Bas
, which range from $30,000–200,000 each; Marian Goodman Gallery associate director Emily-Jane Kirwan told us their
Giuseppe Penone
booth garnered “fantastic interest”; Mnuchin Gallery partner Sukanya Rajaratnam noted that reception of their booth was “extremely positive”; and by 7:30pm, two of Betty Cuningham’s
Bill Traylor
works, each priced over $100,000, had been dotted red (a pricing practice the dealer still embraces). 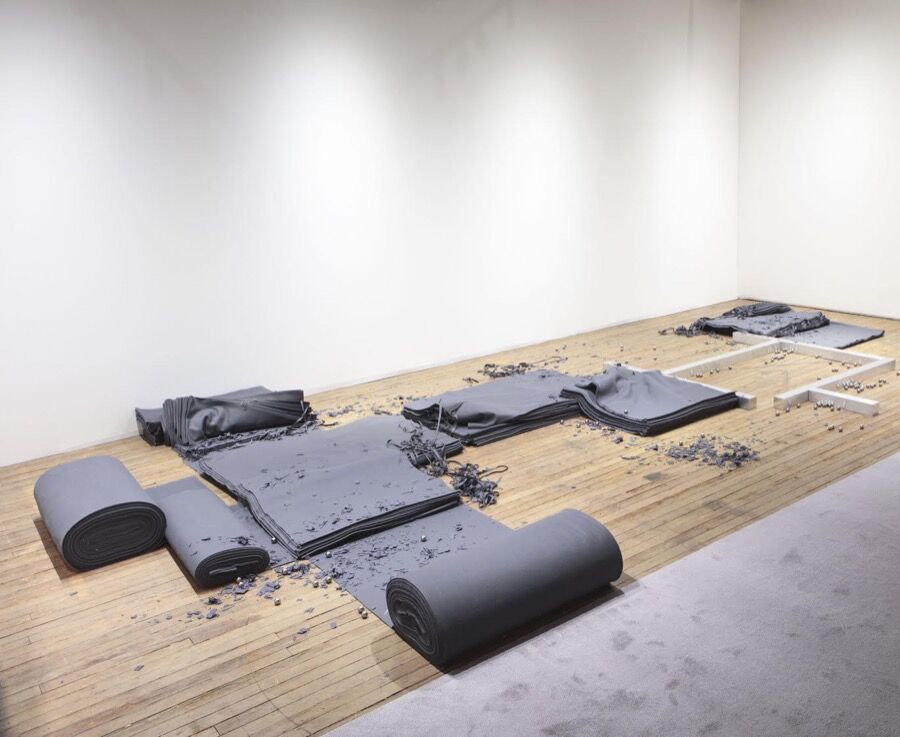 Crowds were drawn to David Nolan Gallery’s roped-off
Barry Le Va
installation, a work the artist originally conceived in 1967, and recreated on site at the fair; New York Times fashion photographer Bill Cunningham was spotted snapping the piles of grey felt and rogue aluminum balls that the artist had carefully strewn across the floor. “Traditionally these kind of works operate within an institutional structure, so to put that in an art fair context is challenging,” said the gallery’s associate director George Newall. Yet despite this, the gallery had two museums keenly interested in acquiring the work by the end of the night. So, while the fair delivers the traditional, museum-quality, two-dimensional works it’s known for, it also transcends said expectations by way of a welcome dose of diversity.
“I see this whole conversation in museums about diversity and revisionism, and it’s very important to us at ADAA to be doing things that they’re doing on an institutional level,” Sheffer explained. And while there’s a wealth of group presentations that delve into revisionism (a smart standout includes Fraenkel Gallery’s pairings of
Edward Hopper
paintings and four photographers he influenced), it’s in the solo presentations —which represent over half of the fair—that a sense of diversity emerges. “It’s a racial diversity, it’s a gender diversity, it’s an age diversity,” Sheffer said. “It is something that museums are looking at very carefully in their exhibition programs and their acquisition records. A lot of them are starting to acquire work by African-American artists that they had not acquired 30 or 40 years ago.” A strong cohort of galleries have taken a look at their rosters and chosen to spotlight African-American artists, as well as female artists (a strong trend carried over from the fair’s 2015 edition), and to debut works fresh from the studio or bring rare, previously unseen gems to light. 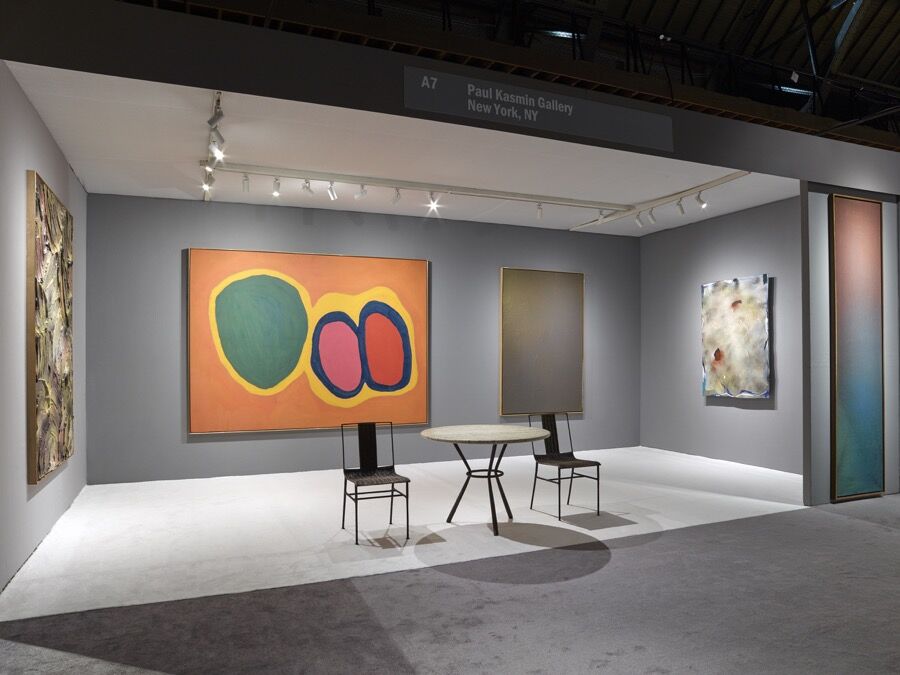 Advertisement
Among such gems are the small fauve-esque oil paintings of the late
Bob Thompson
at Donald Morris Gallery’s booth—paintings from the 1950s in which he appropriated historical masterpieces (think
Botticelli
’s The Birth of Venus or
Boucher
’s Diana leaving her bath), replacing their figures and landscapes with strokes of varying, vibrant colors. “There has not been an exhibition of Bob Thompson anywhere in the world that is that thorough since the Whitney Museum show that Thelma Golden curated in 1998,” Sheffer explained. Indeed, the booth, which marks 50 years since Thompson’s premature death, includes works that were included in that show, in addition to others that haven’t been shown publicly in decades. 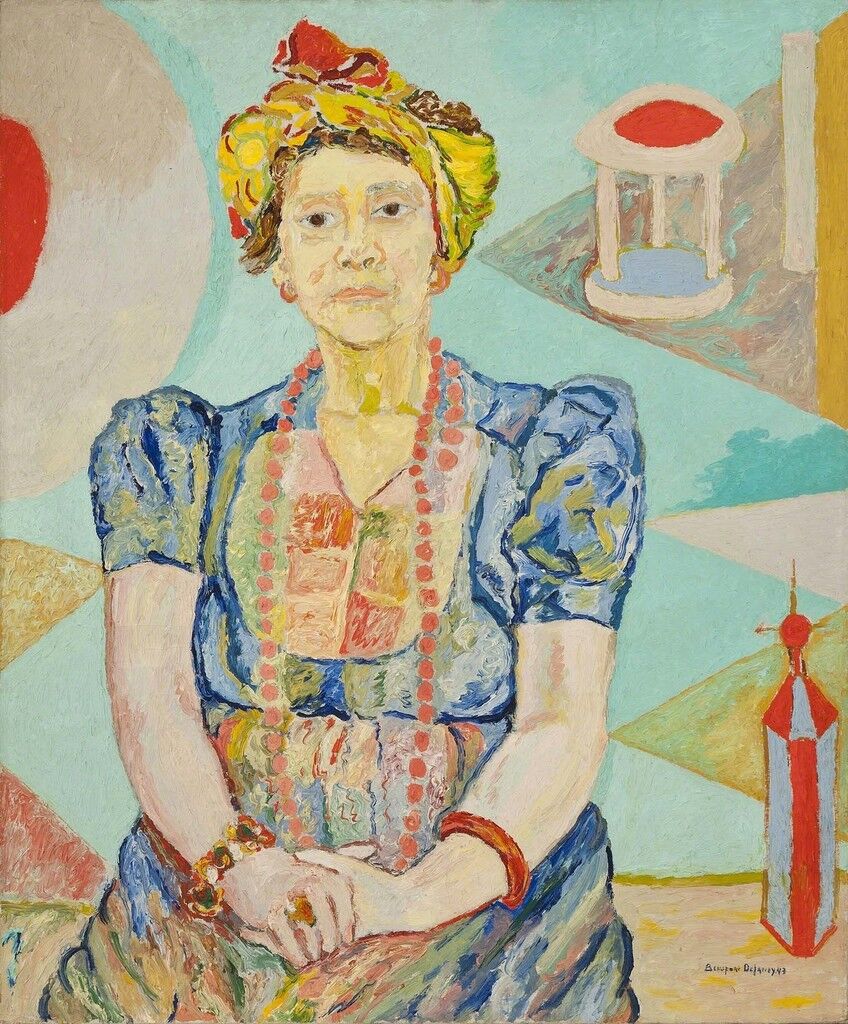 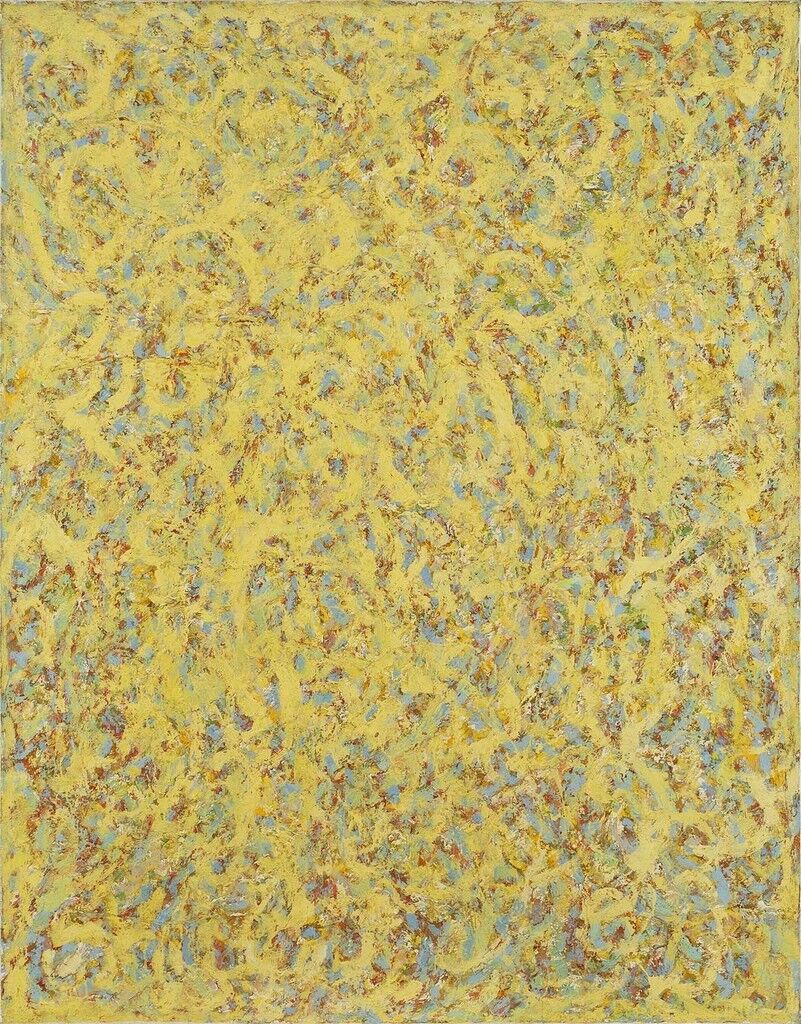 Beauford Delaney
Untitled, ca. 1958
Michael Rosenfeld Gallery
Michael Rosenfeld Gallery, which also represents Thompson, is showing African-American artist
Beauford Delaney
; his portraits, city scenes, and abstractions are marked by spirited, liberal brushstrokes, and tell the stories of the intellectual circles he traversed in New York, and Paris, where he moved 1953 and was inspired to abandon figuration. “He really contributed so meaningfully to the American modernism narrative,” gallery director Halley K. Harrisburg said, and added, “and unlike a
Jacob Lawrence
or a
Romare Bearden
, he didn’t feel defined by the black narrative.” The gallery took ADAA as an opportunity to contextualize the artist. “Amongst the
Chagalls
and
Noguchis
and the
Légers
, this is where Delaney belongs, and we are consistently seeing that with museum acquisitions,” she explained. “Everyone from the MoMA to the Wadsworth Atheneum to the Greenville County Museum of Art to the DIA have included his works, so we’re seeing his work being displayed within the context of great American art and felt that such a venue, where you will hopefully see the best of the best, he deserved to be.” 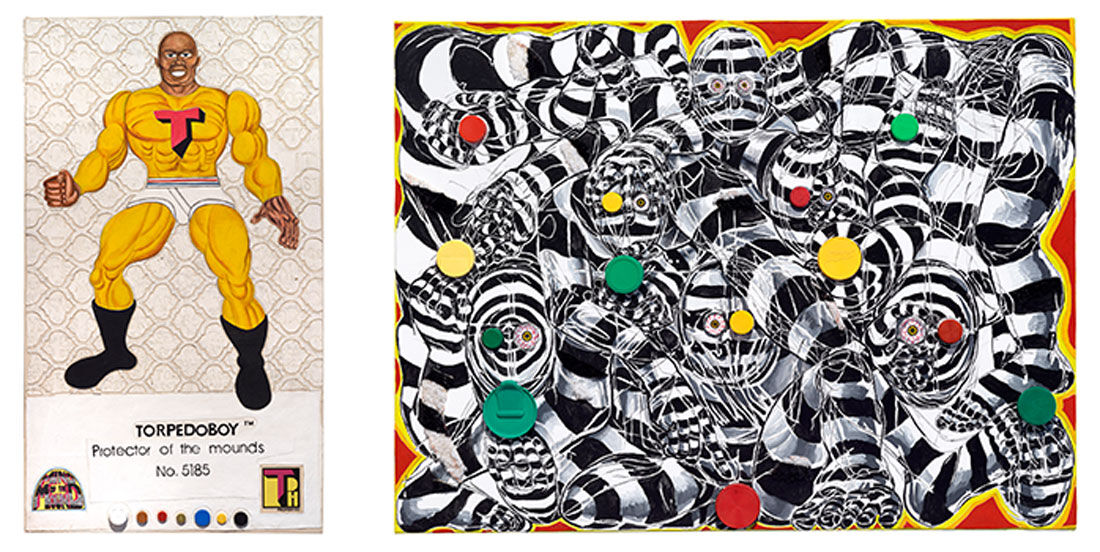 One of the most exciting presentations of new works are paintings and drawings by
Trenton Doyle Hancock
at James Cohan (prices range from $3,500 to $45,000), which follow the close of two U.S. museum exhibitions that featured the artist. (At the vernissage, Hancock himself held court in the booth, even standing for Instagrams in front of the new paintings.) Inspired by a narrative he began to develop in 2014 for animations and a film, the works are fantastical, psychological self-portraits. “There’s something about the pop nature of his work, the fun nature of his work, that’s equally matched by the seriousness of the way he makes it,” said David Norr, a senior director at James Cohan, who noted that interest in the works has been good.
Fair newcomer Haines Gallery shows sculptures and works on paper by Iranian artist
Monir Shahroudy Farmanfarmaian
(prices range from $40,000 for a work on paper to $400,000), who is now in her nineties and received her first U.S. solo museum exhibition last year at the Guggenheim. Of her mirrored mosaic sculptural works on view, two were included in the Guggenheim show and the rest arrived directly from her Tehran studio last Friday. “Her works are inspired in part by Iranian traditional mirror work found in shrines and mosques, and then she combines that with her understanding of abstraction—she was in New York in the ’50s, when hard-edged abstraction was coming into its own,” Haines director David Spalding noted. 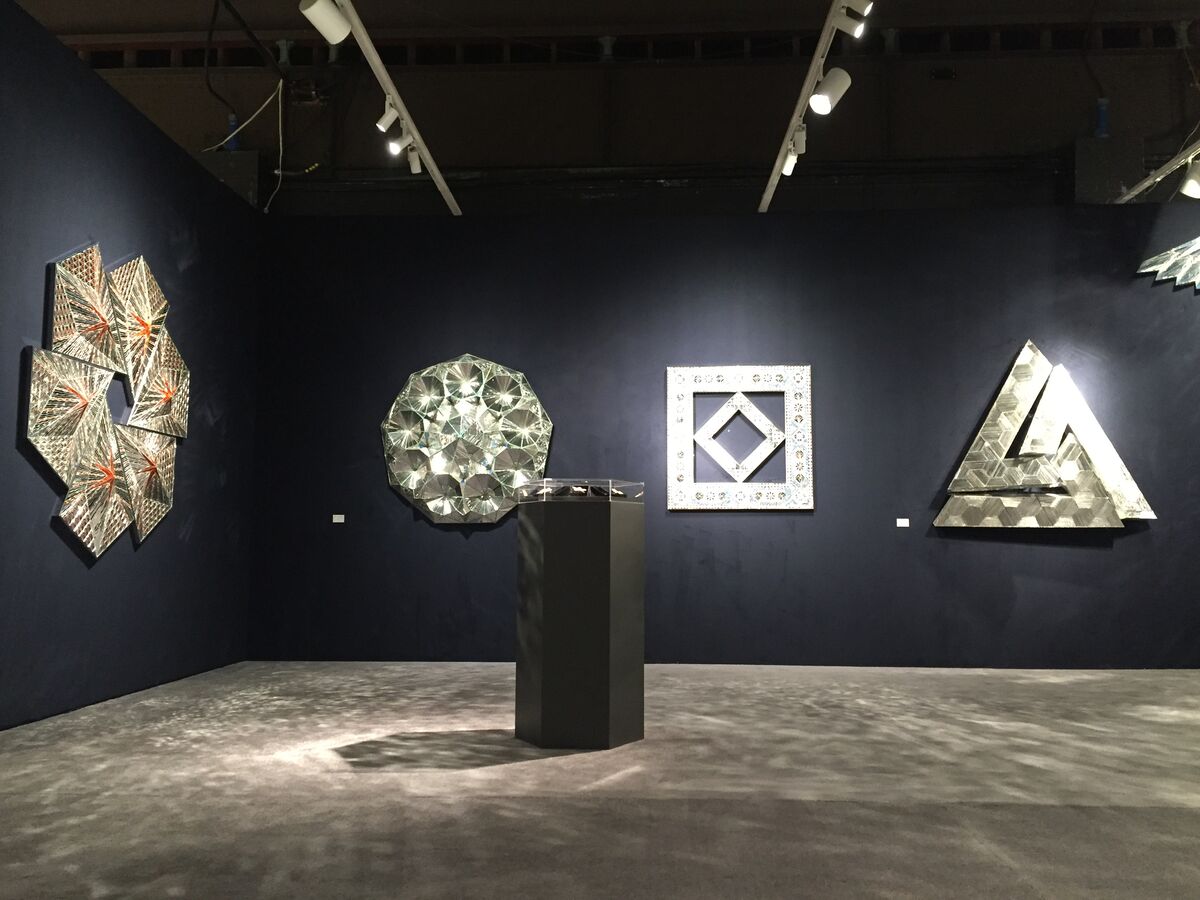 Installation view of works by Monir Farmanfarmaian at Haines Gallery’s booth at ADAA: The Art Show, 2016. Photo courtesy of the artist and Haines Gallery.

On the other side of the hall, the delicate cut-paper ink and graphite drawings of Jasmin Sian filled Anthony Meier Fine Arts’s booth (priced at $10,000–22,000 each); the tiny, intricate brown-and-black compositions were made on deli bag paper. And a few booths away Tilton Gallery, also new to the fair this year, also brings a strong female showing with a new series by
Simone Leigh
, “The Anatomy of Architecture”—ceramic busts inspired by traditional African houses, adorned with small porcelain rosettes.
At Sean Kelly Gallery, new paintings and three kinetic works by
Rebecca Horn
(prices range from €18,000 to €170,000, excluding tax) warrant a closer look. Impressive in craft and aesthetically mesmerizing, the works move mechanically; in one, for example, an iridescent blue butterfly perched on a volcanic rock gently flutters its wings every so often. Other standout female booths include
Gillian Wearing
’s magnetic selfie installation charting 17 years of her life at Tanya Bonakdar,
Sherrie Levine
’s plywood “knot” works at David Zwirner (a nod to her current show), early
Marilyn Minter
paintings at Salon 94, and
Mary Bauermeister
’s whimsical mixed-media assemblages at Pavel Zoubok Gallery.

The most fascinating narrative (and sticker shock) may well go to the Bill Traylor drawings that Betty Cuningham shows. Considered an outsider artist, Traylor (who was featured at the American Folk Art Museum in 2013) was born a slave in 1854 in Alabama, and didn’t begin making art until he was 85 and homeless, when he met artist Charles Shannon, who gave him cardboard and art supplies. “What you see here would be hung up on a clothesline,” Cuningham told me, gesturing towards the quiet drawings of people and farm animals. “Shannon purchased 1,200 works from him, probably for a dollar apiece,” she added. The works on view are from Shannon’s collection, and now start at $50,000. After Traylor’s death, Shannon placed Traylor in the collections of the Met, the Whitney, and the MoMA—“he was determined that he was important,” Cuningham explained. “I wanted to bring his works into something that wasn’t necessarily related to outsider art,” she says. 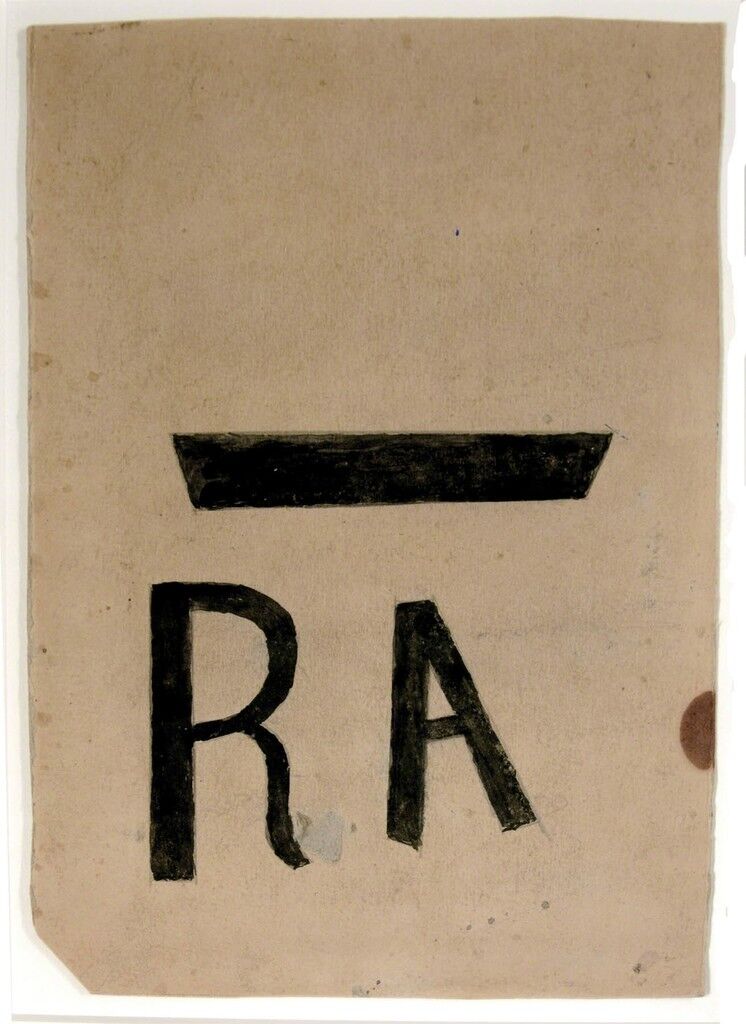 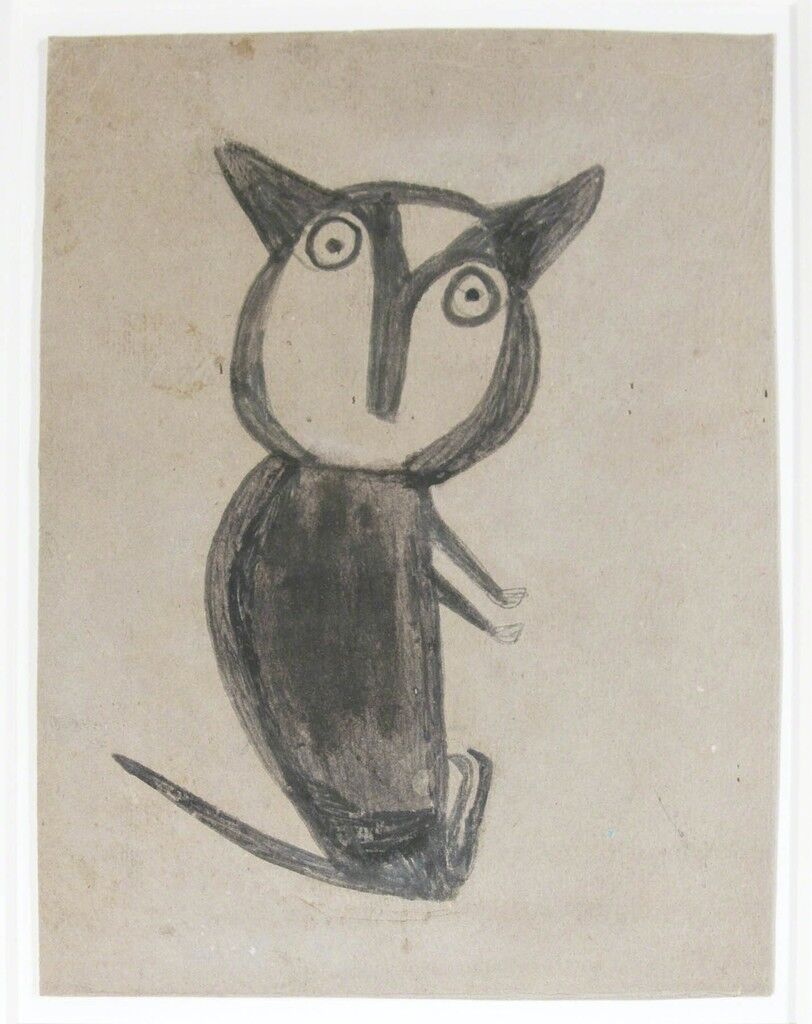 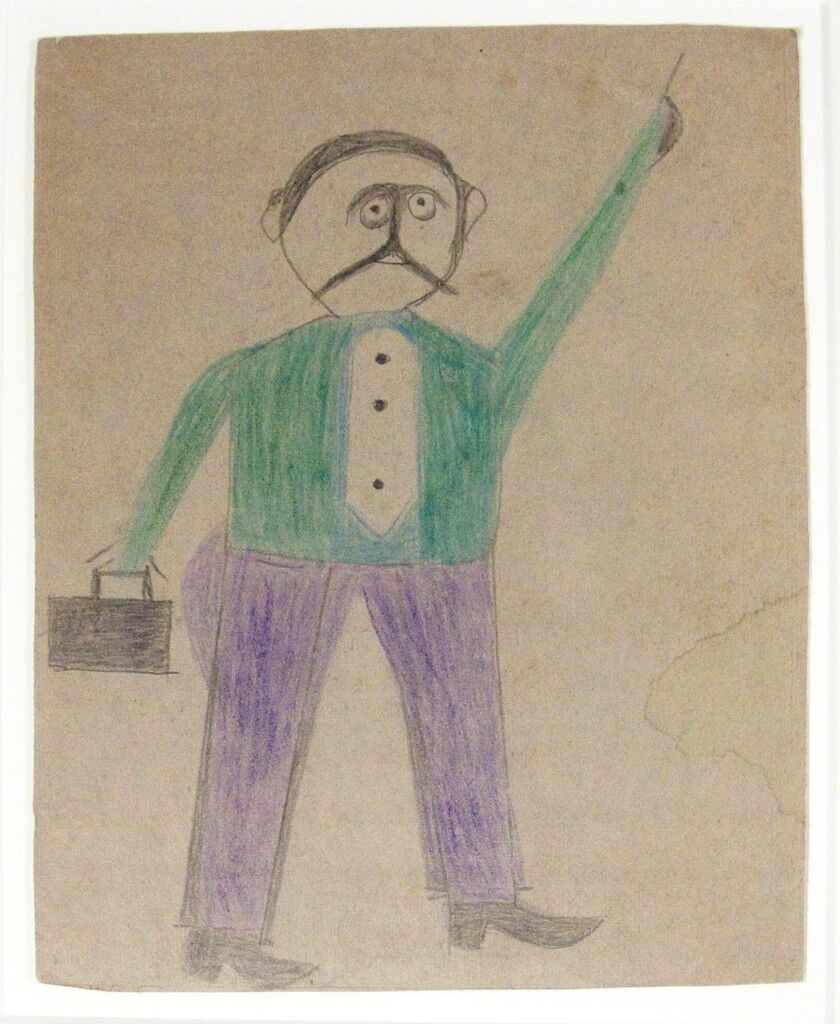 Bill Traylor
Mexican Man ("He Just Come to Town"), 1939-1942
Betty Cuningham
While the commercial success of this edition is still to a great extent to be determined, one hopes that collectors will pick up on the diverse offerings at the fair, and thus encourage other galleries to follow suit. This edition certainly represents growth from previous years, and poses promise for the future. And while there’s still a long way to go, Sheffer’s leadership certainly seems like a step in the right direction. “I think whereas something like the auction houses are looking specifically at money, return, and the highest prices,” he told me, “we want to be part of a bigger intellectual discussion about art per se, as opposed to about property, as they call it.”
Casey Lesser is Artsy’s Lead Editor, Contemporary Art and Creativity.
ADAA: The Art Show is on view at the Park Avenue Armory, New York, March 2–6, 2016.
Related Stories