As the Art World Swoons over Playful Ceramics, Arlene Shechet Hits Her Stride 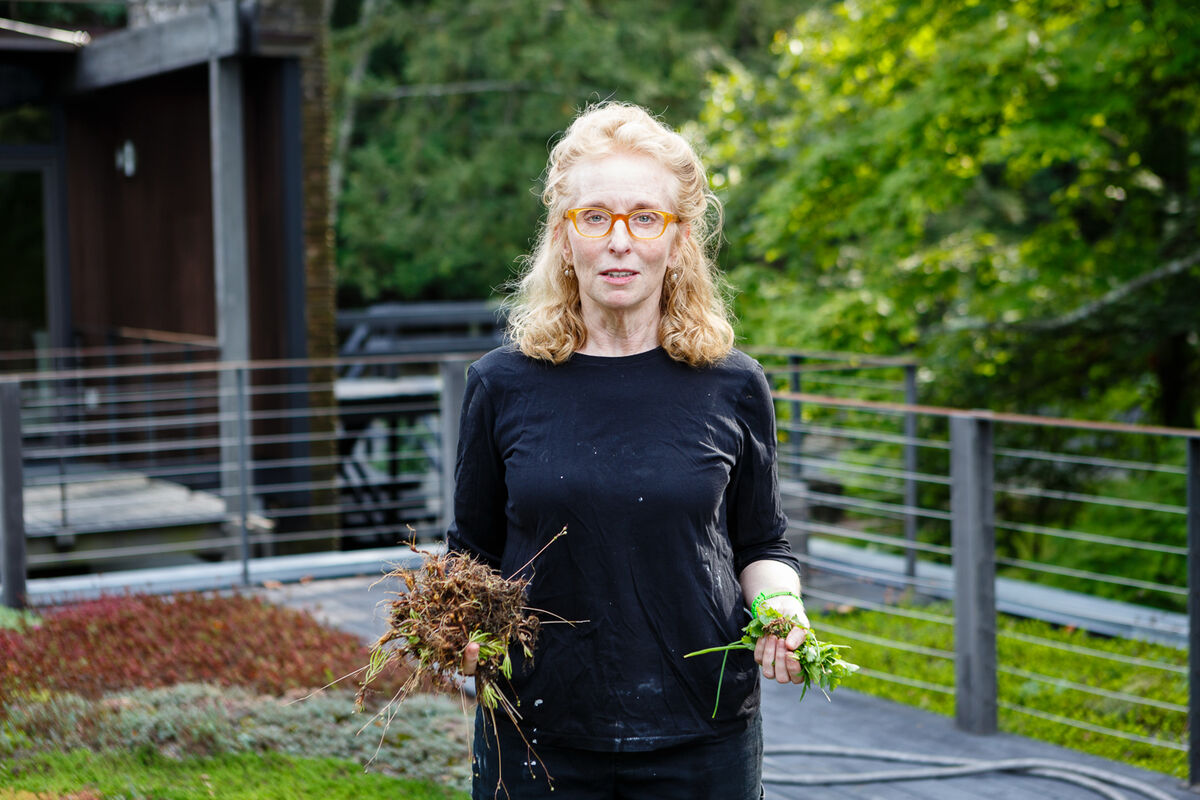 “I’m interested in what happens psychologically when you see something that’s addressing the issue of precariousness, especially using material that people describe as fragile,” says the sculptor
Arlene Shechet
, who over the last decade has worked predominantly in ceramics with an ambition and attitude uncommon to the medium.
Perched on stools and other makeshift pedestals, her large-scale clay forms seem at once to soar and sag with an off-kilter sense of gravity and humor. Some evoke bodily organs or bulbous creatures. Others are more architectural, built up with bricks that meld into slippery slopes. “I am trying to have the viewer find a kind of empathy with the experience of these body-sized pieces finding their balance,” she says.
“Arlene Shechet: All at Once,” the artist’s first museum survey, opening June 10th at the Institute of Contemporary Art in Boston, shows how she has cycled through such materials as plaster, cast paper, ceramics, and porcelain over the past 20 years to make works that retain a sense of fluidity even in their hardened forms. 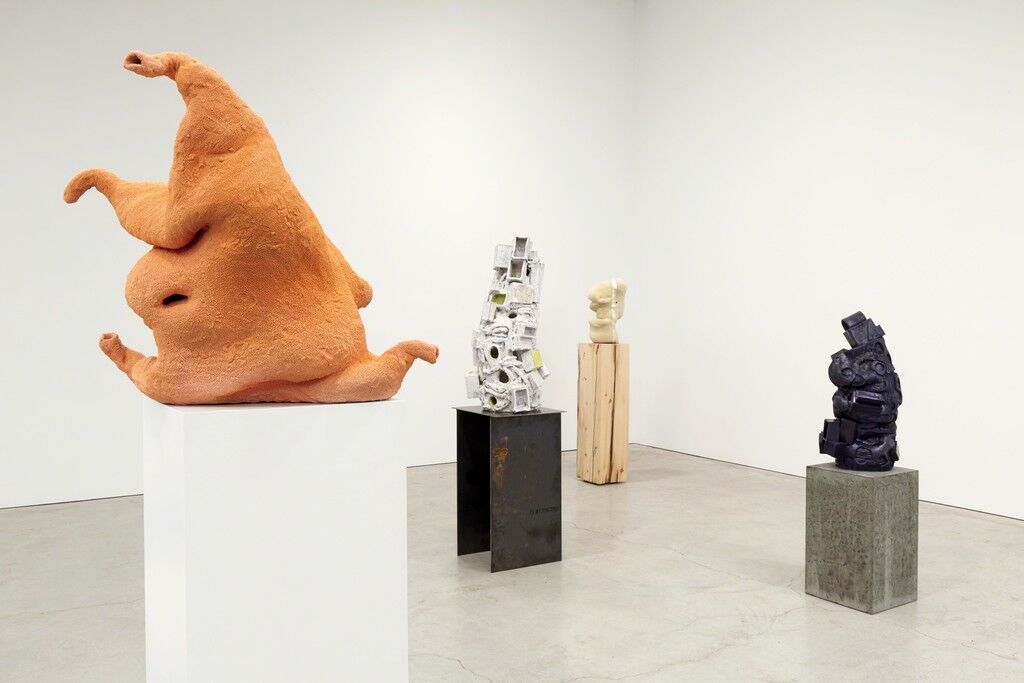 Installation view of “Arlene Shechet: All at Once” courtesy of ICA Boston

“The joke is, as a woman you have to be over 80 before the art world really loves you,” says Shechet, a couple decades younger than that, sitting in the airy loft in Tribeca where she and her husband settled in the mid-1980s, when that lower Manhattan neighborhood was still marginal. As with many women artists of her generation, art-world recognition came a little later in life. In her first 15 years out of school, Shechet held art-academic jobs at both the Rhode Island School of Design, where she received her MFA in ceramics in 1978, and then Parsons School of Design while raising her children, born in 1986 and 1990.
“I was always making work in the studio while teaching and having babies, but I didn’t have time for studio visits and self-promotion during those years,” says Shechet, who moved her studio down to the basement of her Tribeca building as her family grew. As the demands of motherhood loosened over the last decade, she built a larger studio with a walk-in kiln at the family’s second home in Woodstock, New York, which has become her primary workspace four days a week. In ceramics, she has hit her stride, receiving critical acclaim for her breakthrough show at Elizabeth Harris in 2007 that has only grown with subsequent gallery shows, most recently at Sikkema Jenkins in 2013. 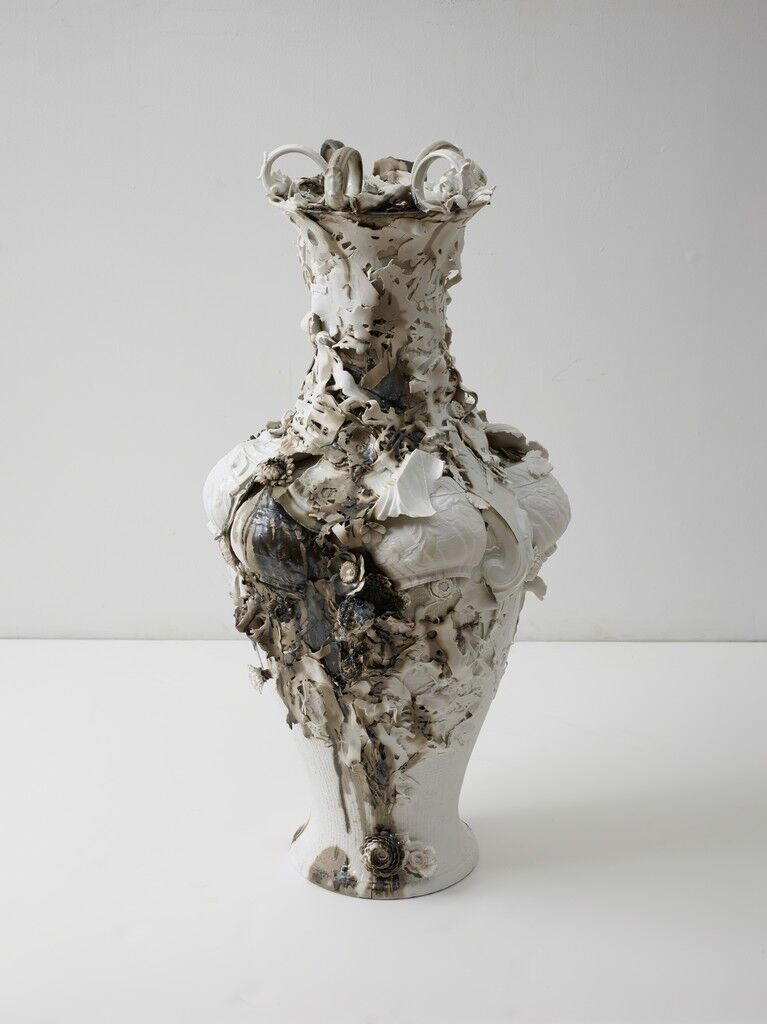 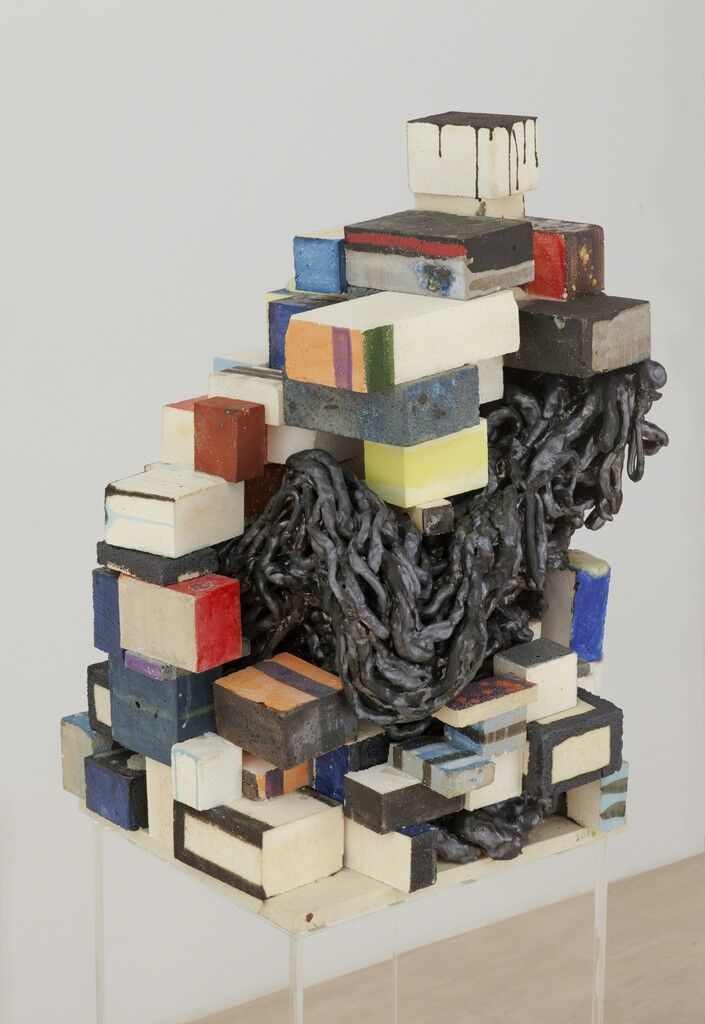 Arlene Shechet
Tattletale, 2012
"Arlene Shechet: All at Once" at ICA Boston, Boston (2015).
Advertisement
The ICA exhibition starts with her series of plaster Buddhas, begun in 1993, which were a turning point for Shechet. Trying to cope with the terminal illnesses of two close friends and interested in Eastern philosophies, she began experimenting with plaster without the support of armatures or having a predetermined idea. In the searching process, she made a lumpy mound that reminded her of a seated Buddha.
“Plaster is a timekeeper because it starts out as a powder, water is added and it becomes liquid, and then it becomes harder and harder, describing very observationally how something changes,” Shechet says. She began making one Buddha per studio session, from tiny to large scale, depending on how much time she had on a given day. She layered them with colorful paint skeins—made on glass and then peeled off and pressed into her humble icons, her hand prints marking the surface like drawings. “I used the process and finished pieces as a reminder to pay attention and feel how things are transitional,” she says. At the ICA, Shechet is displaying a couple dozen Buddhas, which she continued to make through 2000, on a terraced installation she built from planks. 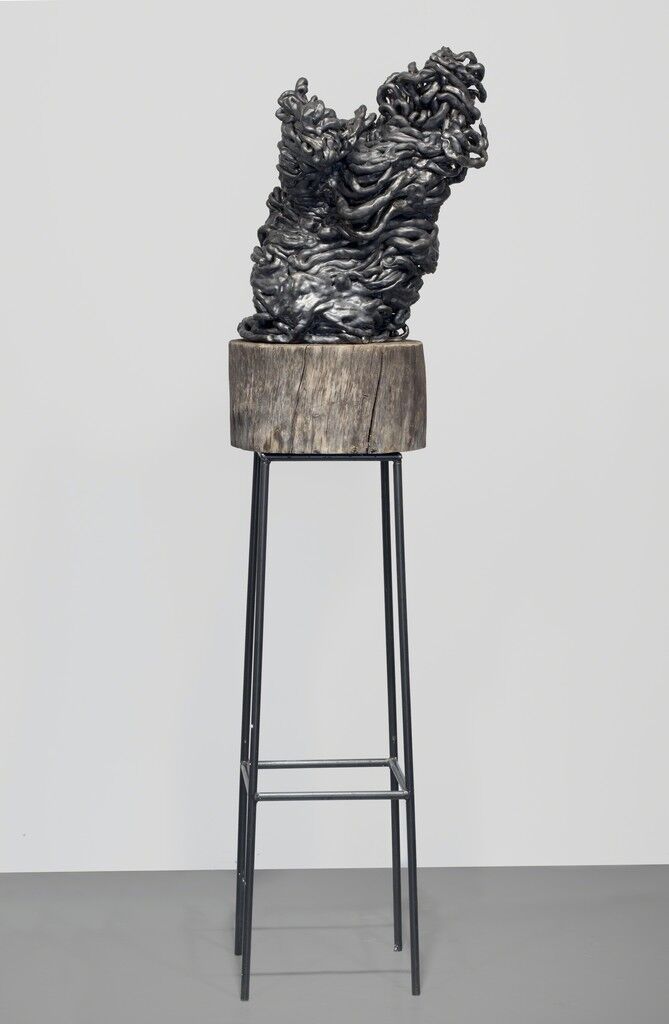 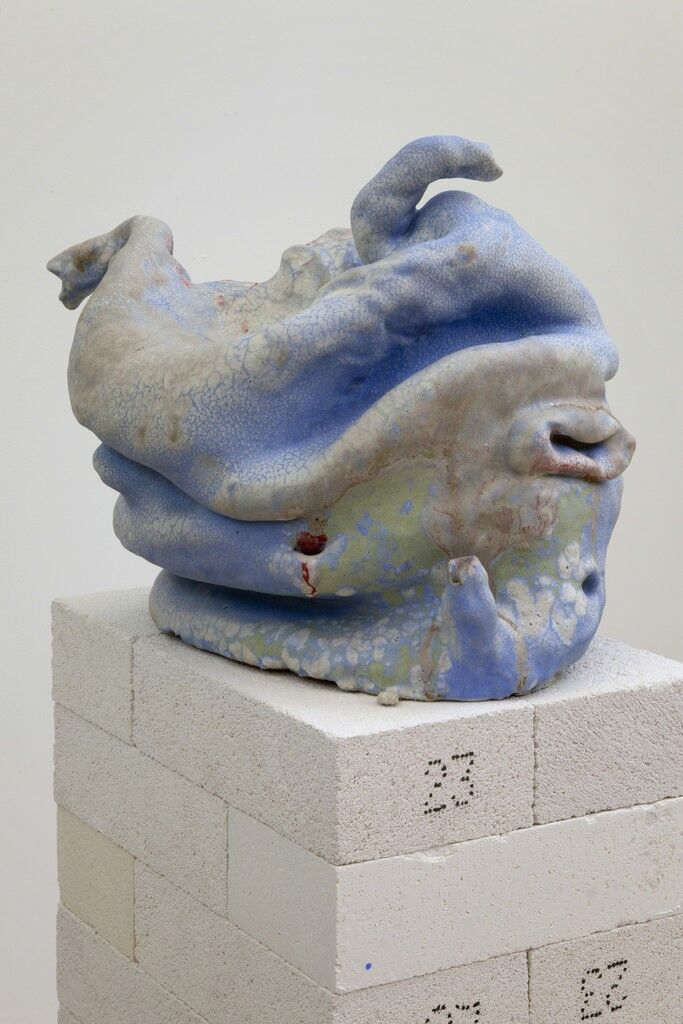 Arlene Shechet
Is and Is Not, 2011
"Arlene Shechet: All at Once" at ICA Boston, Boston (2015).
Shechet’s interest in the arc from squishy to solid has remained consistent, whether casting  paper pieces that begin as liquid cotton and pulp, which she’s done on and off at Dieu Donné Papermill since 1997, or manipulating clay, another time-based medium that begins limp and becomes structural.
“All the ceramics are hollow, no matter how solid they might look, or they can’t be fired,” says Shechet. She typically works on a half dozen sculptures in her Woodstock studio at the same time in various states, continually plunking down new forms on top of old or sawing off other elements over a period of six-to-twelve months. “They have to be built very slowly because there’s no armature,” she said. “They hold themselves up.” 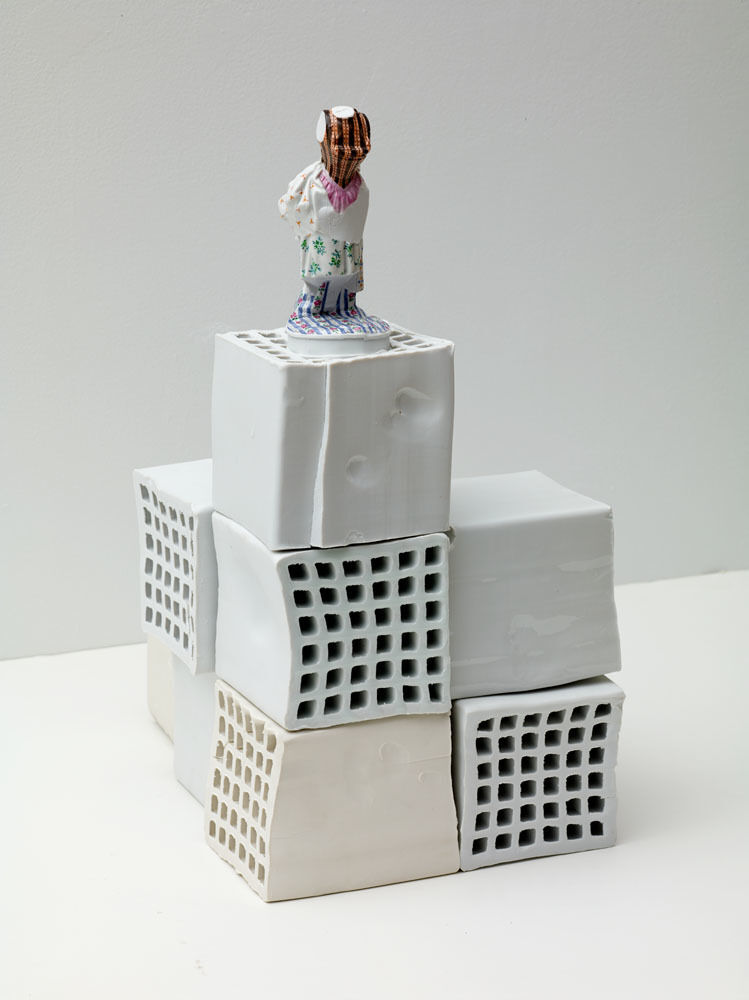 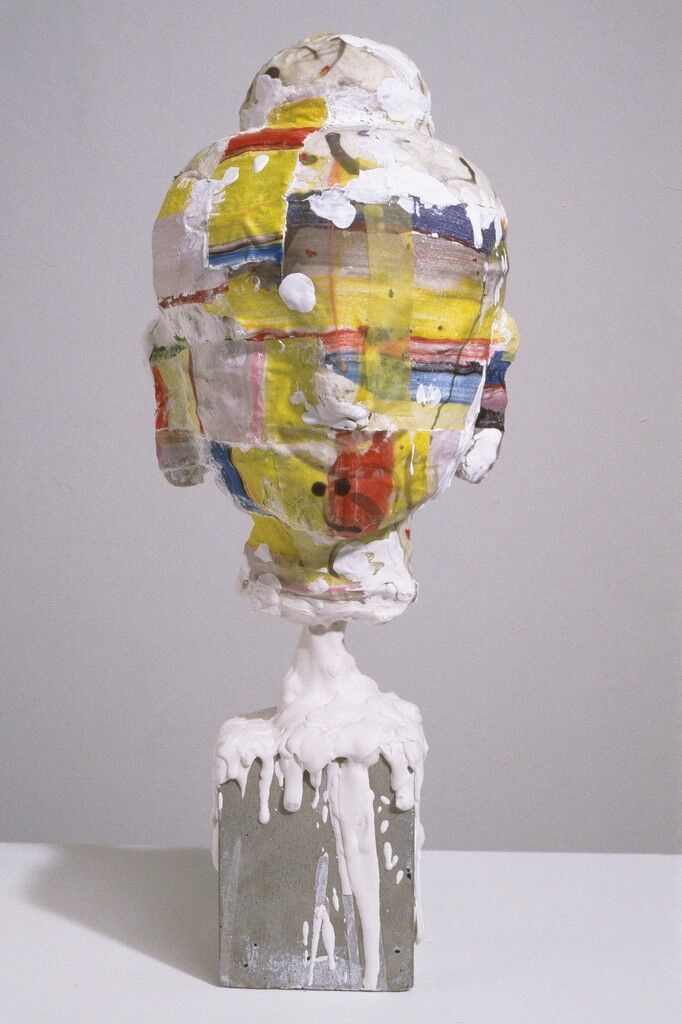 Arlene Shechet
Madras Head, 1997
"Arlene Shechet: All at Once" at ICA Boston, Boston (2015).
She first began working with clay while caring for her father, who was suffering from congestive heart failure. Her preoccupation with the idea of breath informed the kind of visceral forms she was making, evocative of inflatable lungs or aortas with comic protuberances. Over time, she incorporated parts of the kiln itself—including the bricks used to insulate the inside of the kiln and the shelves that pieces sit on when fired—into her sculptures as structural elements. “Why not use it all as material?” says Shechet, who fuses the messy parts of her life into these pieces, which can be both ungainly and playful.
She likes that there’s no easy way to describe her work, and that forms and impressions shift as you move around a sculpture. “By the time you get back to where you started, you see it differently,” she says. “I think that’s a metaphor—for everything.”
Hilarie M. Sheets
“Arlene Shechet: All at Once” is on view at ICA Boston, Jun. 10 – Sep. 7, 2015.
Follow ICA Boston on Artsy.
Related Stories