As the Dead Sea Dries Out, an Artist Immortalizes It 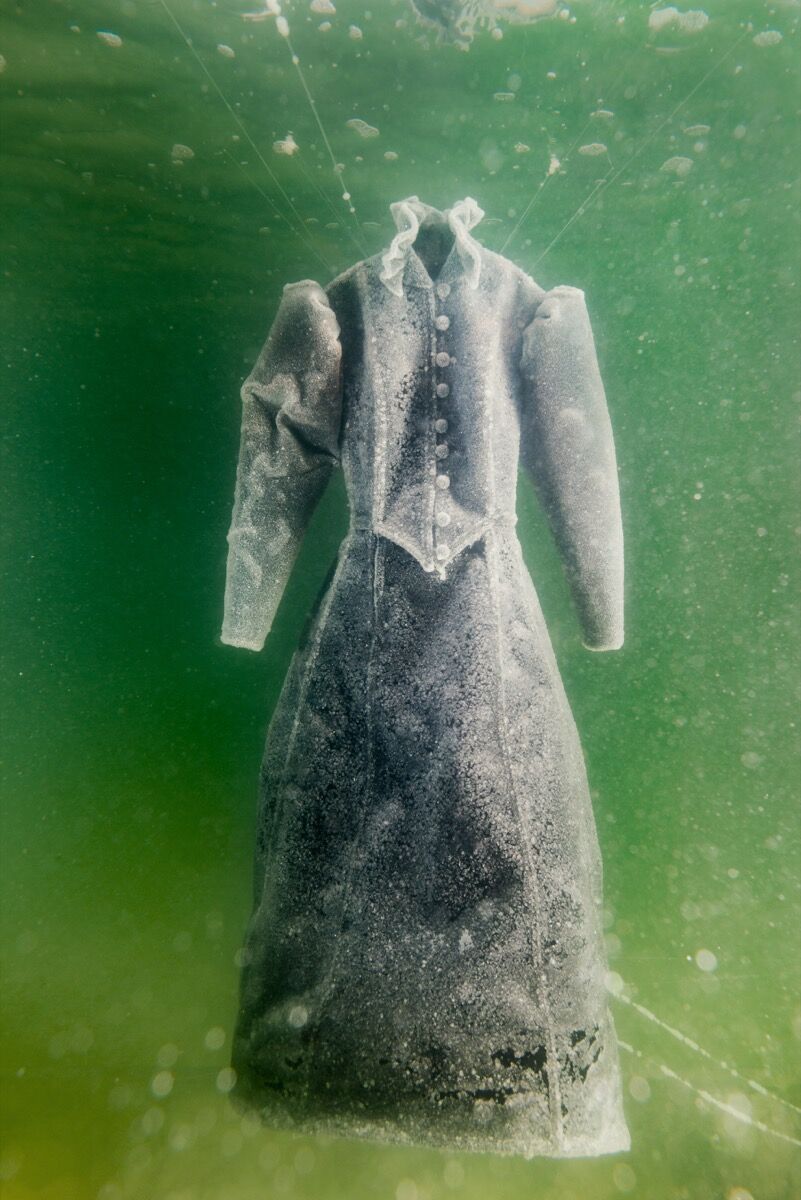 As a child,
Sigalit Landau
grew up gazing out over the jagged hills of the Judean Desert to the Dead Sea and the distant skyline of Jordan beyond. The lake’s incomparable beauty entranced the prominent Israeli artist, who has returned to it throughout her career, as a metaphor and as a medium. Landau has created some of her most iconic works in its hypersaline waters, including DeadSee (2005), an 11-minute video in which the artist floats naked among a string of unraveling watermelons. For her more recent salt-dipped sculptures, Landau harnesses the Dead Sea’s salt to act as a catalyst, mutating objects including a violin, children’s shoes, a dreamcatcher, and a noose.
“Salt heals, preserves, hides, kills,” Landau told me, explaining her attraction to salt for its paradoxical qualities as much as its chemical properties. “This specific lake has myths and [pre]history all around its shores, stories of radicalism, Christianity, heroics, unbelievable agriculture—and it is a border as well, so the behaviour of salt and the natural environment is highly metaphoric, and keeps changing direction as I experiment.”
Once thought to be devoid of life, the Dead Sea is a completely unique ecological system and the lowest point on earth, at -429 meters below sea level. Recently, after the closure of Ein Gedi beach—its last public beach and once the largest public beach on the lake’s shores—there has been cause for major environmental concerns. The damming of its two tributaries, The Jordan River and the Yarmouk River, together with the unrelenting Middle Eastern sun, and intense harvesting of magnesium, potash and other minerals in Israel and Jordan have led to accelerated evaporation; much of its southern area is now gouged by sinkholes that have been appearing since the 2000s, due to the rapidly declining water level, destroying beaches and rendering roads inaccessible, while the lake’s southern area is now comprised almost entirely of evaporation pools for mineral harvesting.
The Dead Sea’s demise appears imminent, but Landau continues to use her practice to highlight its environmental and geographic problems and conserve its historic and spiritual importance. For the past few years, for example, she has been planning Salt Route Bridge, a monumental floating bridge that will create a symbolic link over the Dead Sea from the shores of Israel to Jordan. “I think that my works are also about this one directional tide... yearnings that are lost and gone, melancholic, purified, healed, petrified,” she said. I asked her if she considers her art to be a form of activism. “I hope so. Despite the extremely hard conditions and shifting of the ground… I am very much committed to this place and the ideas and experiences that activate me year after year.” 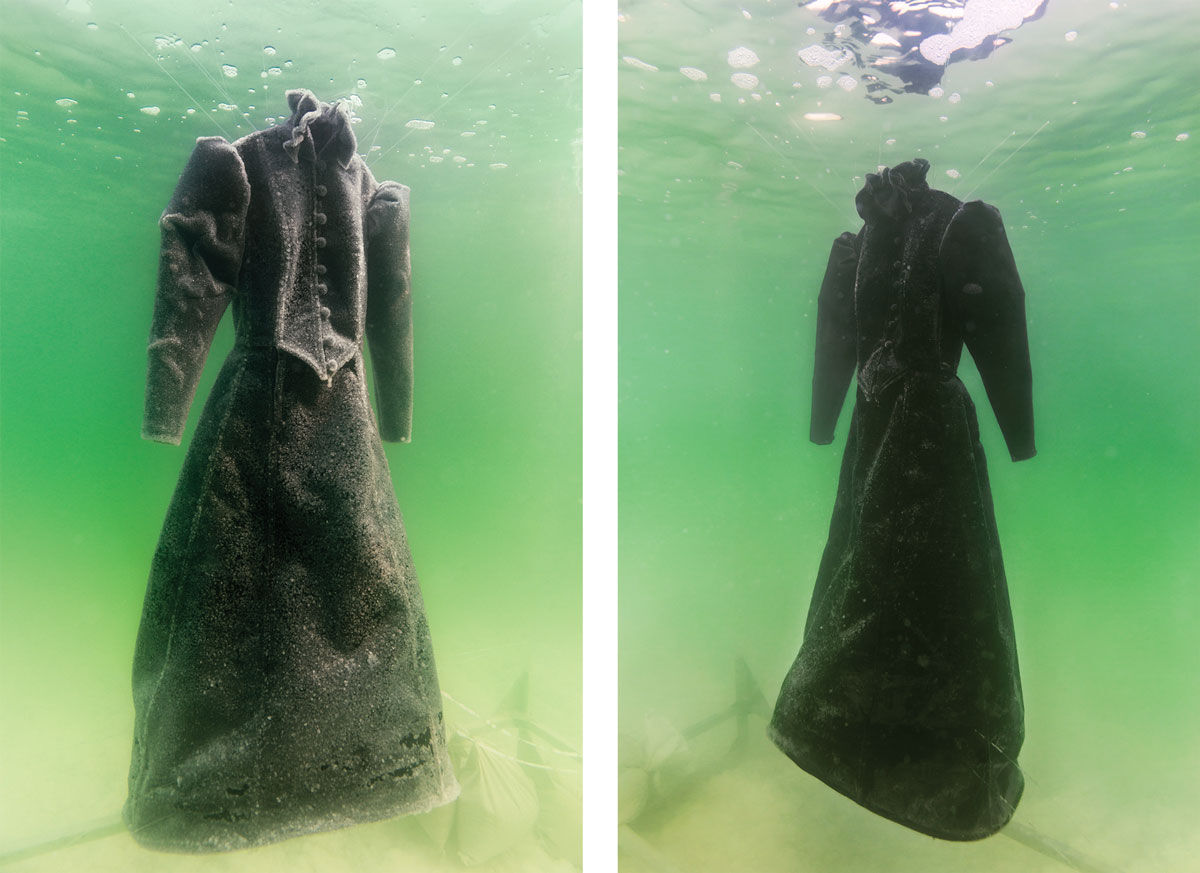 Landau’s latest project, Salt Bride (2016), now on view at Marlborough Contemporary, London, sees her return to the Dead Sea’s waters once again. To create the eight color photographs on view, Landau first worked in cooperation with the Habima National Theatre in Tel Aviv to form an exact replica of a traditional Hasidic dress, a costume worn by the female lead, Leah, in S. Ansky’s play, The Dybbuk. Written between 1913 and 1916, The Dybbuk tells the story of the exorcism of a young bride. “The play is a collage of traditional folklore stories assembled into one well-written and sought-after masterpiece, combining Judaism, mysticism and the subconscious,” Landau explains. “The role of Leah is orphaned, rebellious, possessed, and subversive in a perverse financially dominated Papa-patriarchy.”
The artist then submerged the dress several meters under the lake’s water and collaborated with photographer Yotam From to shoot the transformation, as it transitioned from black to white by the lake’s alchemy. “It was very hard to sink [the dress] and dive in the Dead Sea, where everything floats,” Landau says of the process. “The water is saturated with many materials apart from salt, and visibility is not easy to achieve. Yotam needed special equipment and weights of 70kg on his body in order to go down.” The installation of the life-size prints at Marlborough is meant to conjure an immersive space, an “underwater aquarium that speaks of time and transformation.”
The Salt Bride prints emanate an ethereal and quasi-spectral presence: They are indeed suspended in time, but also reminders that time is unstoppable, and will change the lake irreparably, just as it has altered Leah’s dress. Landau’s Dead Sea works are documents, a moving archive of a disappearing space. After decades working there, what does she personally feel is so engaging about this sea and its waters? “That it is like a place on the moon. That it is natural like no other part of nature. That it is so extremely, radically beautiful, but a complete opposite of what it looks like; it is not like a lake, blue and pleasurable. That nothing is dead there as nothing lives there—so the cycle of life-death-life-death doesn't even exist there. It is above life, beyond death.”
Charlotte Jansen
“Sigalit Landau: Salt Bride” is on view at Marlborough Contemporary, London, July 29–Sep. 3, 2016.
Related Stories