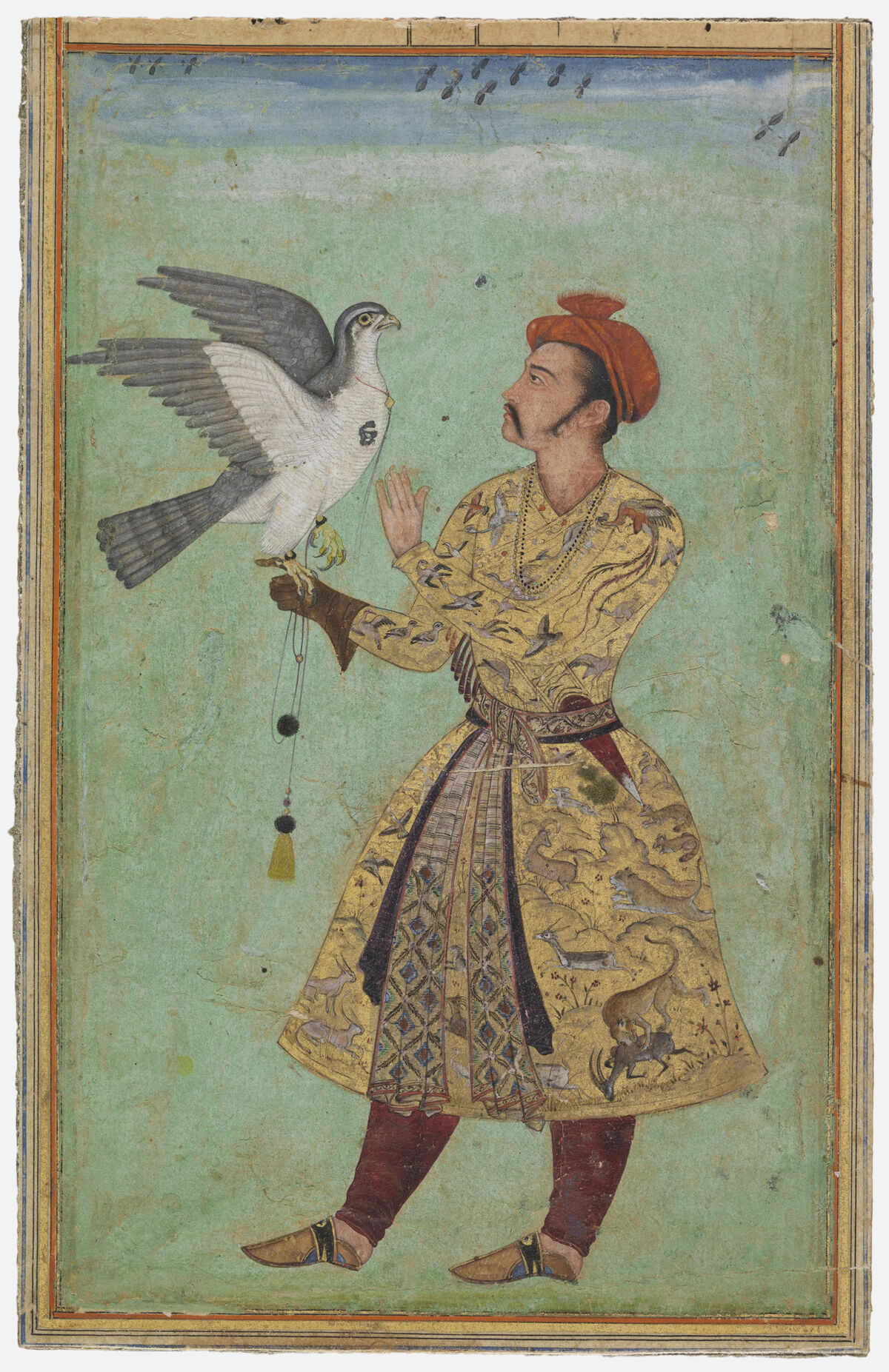 Unknown artist, Prince With a Falcon, 1600-1605. Courtesy of the Los Angeles County Museum of Art. 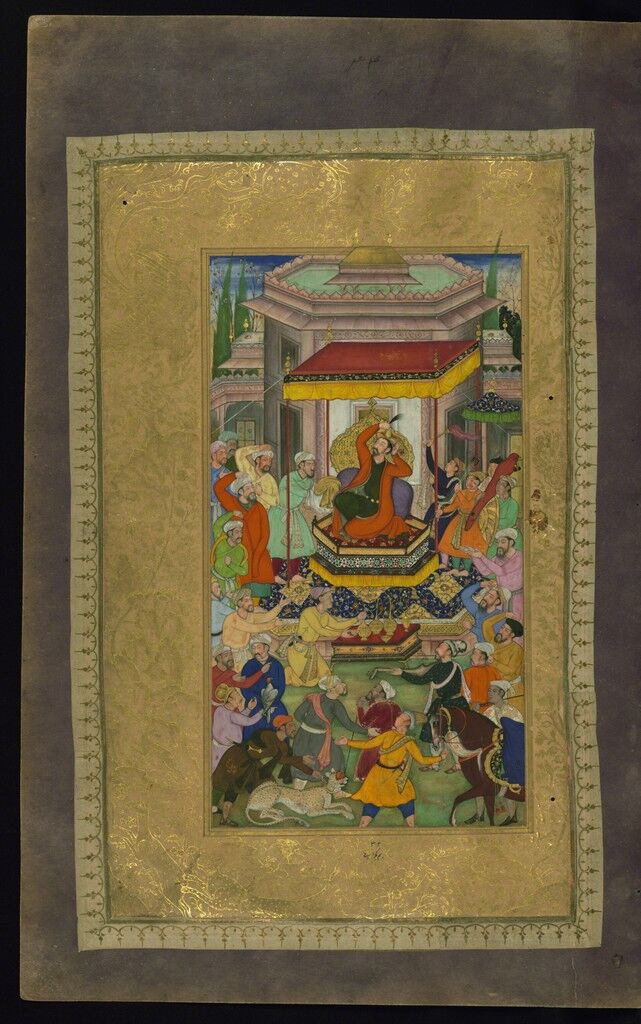 Nizami Ganjavi
Alexander the Great Enthroned at Persepolis, 1595
Walters Art Museum
A bloodied and mutilated elephant fills the bottom left of the Mughal miniature Fall of the Giant (1564–79), its writhing trunk and dappled skin portrayed in painful, exquisite detail. Above the elephant leaps a hero about to hurl the villain to his death, surrounded by celebrating musicians and bystanders scrambling to get out of the way. Intricate architectural details and an elaborately tiled floor provide a busy backdrop to the chaos. This odd scene, violent and gorgeous, is one of 1,400 illustrations from a manuscript of an epic tale commissioned by the Mughal emperor Akbar. It’s a powerful example of the miniature painting tradition that thrived under his rule.
Indian miniature painting had existed in various forms since the 9th century, but there was no cohesive vision. Certain styles began to coalesce in the 15th century, but it wasn’t until the Mughal Empire was established in 1526 that miniature painting came into its own. Mughal miniatures are a blend of the bold, vivid colors favored by Indian painters; the fine, delicate lines preferred by Persian painters; and a European influence from artists like
Albrecht Dürer
, brought to India by Jesuit missionaries. Just like the empire they came from, Mughal miniatures drew from India, Persia, and Europe to create something entirely new.
Mughal miniatures were small (many not more than a few square inches), brightly colored, and highly detailed paintings mostly used to illustrate manuscripts and art books. Despite their tiny sizes, they are incredibly precise, with some lines painted using brushes composed of a single hair. Prince with a Falcon (1600–05), for instance, is roughly 6 inches tall and 3 inches wide, but manages to trace the titular bird’s every feather; the wisps of the prince’s hair; and an entire menagerie of fluttering birds and hunting lions decorating his tunic. These miniatures valued color and extreme detail over shading and realistic perspective, giving figures a static appearance, frozen in positions that emphasize their two-dimensionality.
It’s important to know a bit about the context within which this artistry thrived. Based in northern India during the 16th through 18th centuries, the Mughals ruled as one of the most dominant regimes in Asia. The empire covered most of what is now modern-day India, Afghanistan, and Pakistan, and by 1700, it was the most powerful economic force in the world, with about 25 percent of the world’s gross domestic product.
Beyond military and economic might, the empire was also a watershed moment for Indian art. Founded in 1526 by Emperor Babur, a descendent of Genghis Khan, the empire was famous for its lavish architecture (the Taj Mahal, for one). It was the Mughal gardens, however, that stole the show: exquisite walled spaces filled with flowers, pools, birds, and shaded walkways. 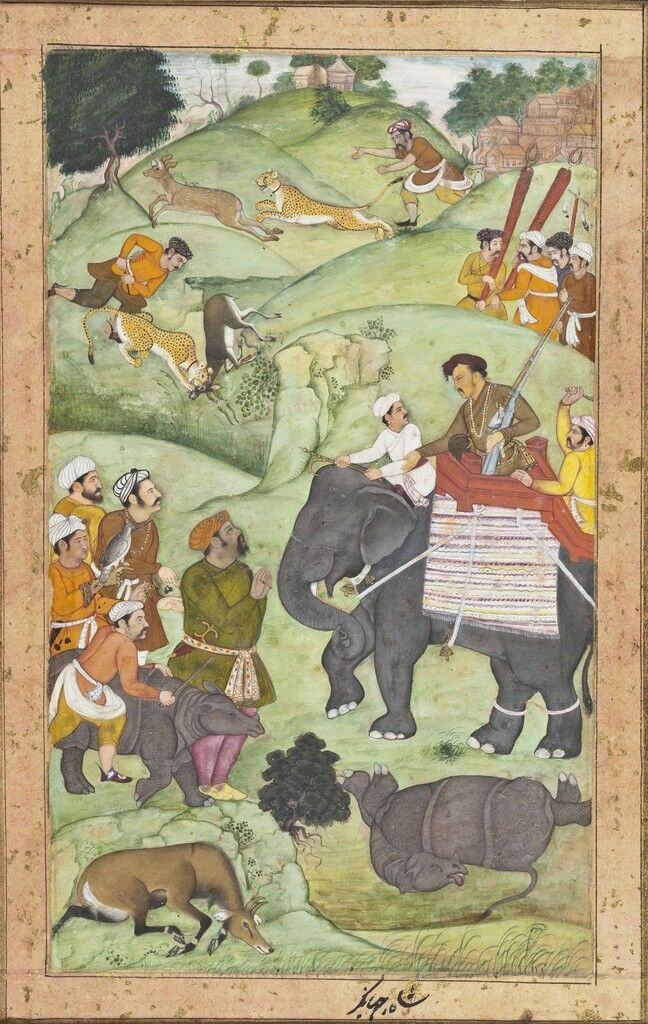 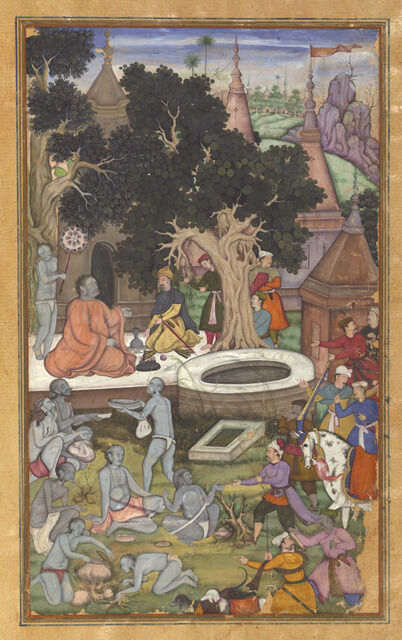 Babur and his retinue visiting Gor Khatri, page 22b from a manuscript of Baburnama (The Book of Babur), 1590s
Yoga: The Art of Transformation, Asian Art Museum
Navina Najat Haidar, a curator in the Metropolitan Museum of Art’s department of
Islamic art
, told Artsy that the “Mughal aesthetic is very unified, extending from architecture to painting—so painting and gardens are related. Plus, the Mughal love of nature and observation of plants is closely linked to the representation of flora and gardens in painting.” Many Mughal gardens are preserved as UNESCO World Heritage sites; UNESCO describes Lahore’s Shalimar Gardens as the “apogee of Mughal artistic expression.” These gardens figure prominently in the miniature paintings, and both speak to the empire’s search for refinement and aesthetic pleasure.
This refinement was far from immediate, however; the first few decades of the empire were unstable and chaotic. A 1540 uprising in Afghanistan forced Humāyūn, Babur’s son, to flee his court in order to seek military help. He took shelter at the Persian Safavid court in Qazvin, where he experienced Persian painting firsthand. He was so enamored with the work that when he finally recaptured his home state in 1555, he brought two Persian painters, Mir Sayyid Ali and Abdus Samad, back to India with him. As the story goes, Mir Sayyid Ali had proven his skill by painting a polo match on a grain of rice, complete with goal posts and four horsemen. Hiring the painters was no casual decision. As art historian J.M. Rogers points out in his book on Mughal painting, “Considering Humāyūn’s beleaguered state and the unlikelihood of his ever regaining a stable position in India, the employment of two… expensive painters while he was still in exile represented a considerable investment.”
These two artists stayed at the court for the rest of their lives, and helped Humāyūn found and run an atelier of over 100 painters. The artists spent their days illustrating manuscripts for Persian love stories and Indian epics like the Mahābhārata, along with scenes of courtly life. Jahangir Weighing Prince Khurram Against Gold and Silver (1615), for example, is an opulent scene showing the emperor’s son on his 15th birthday, seated on a scale made of gold and rubies, surrounded by jewels, daggers, and attendants.
The empire peaked with Humāyūn’s son, known as Akbar the Great, who ruled from 1556 to 1605 and devoted an extraordinary amount of time to the arts. Although allegedly illiterate, he filled his court with poets and painters, encouraged intellectual debate, and sponsored ambitious works of architecture. He advocated extraordinary religious tolerance, which brought an unprecedented peace to the empire. Rarely has an empire been so dedicated to the arts: When Akbar died in 1605, his library of poetry, philosophy, and painting was valued at over three times the amount he spent building the city of Fatehpur Sikri.
Akbar’s son and successor, Emperor Jahangir, had an even more single-minded obsession with painting. Rogers describes him as a “visual glutton,” recalling an incident when, rather than help a dying man who asked for aid, Jahangir had his painters “take a portrait…[of his] emaciated face.” Stories like this underscore the way painting was intimately tied to the court, and, by extension, to the desires of the emperor. It was only through the emphasis and funding provided by Humāyūn and his descendents that court painting in the form of Mughal miniatures came to be seen as the highest form of sophistication and elegance. 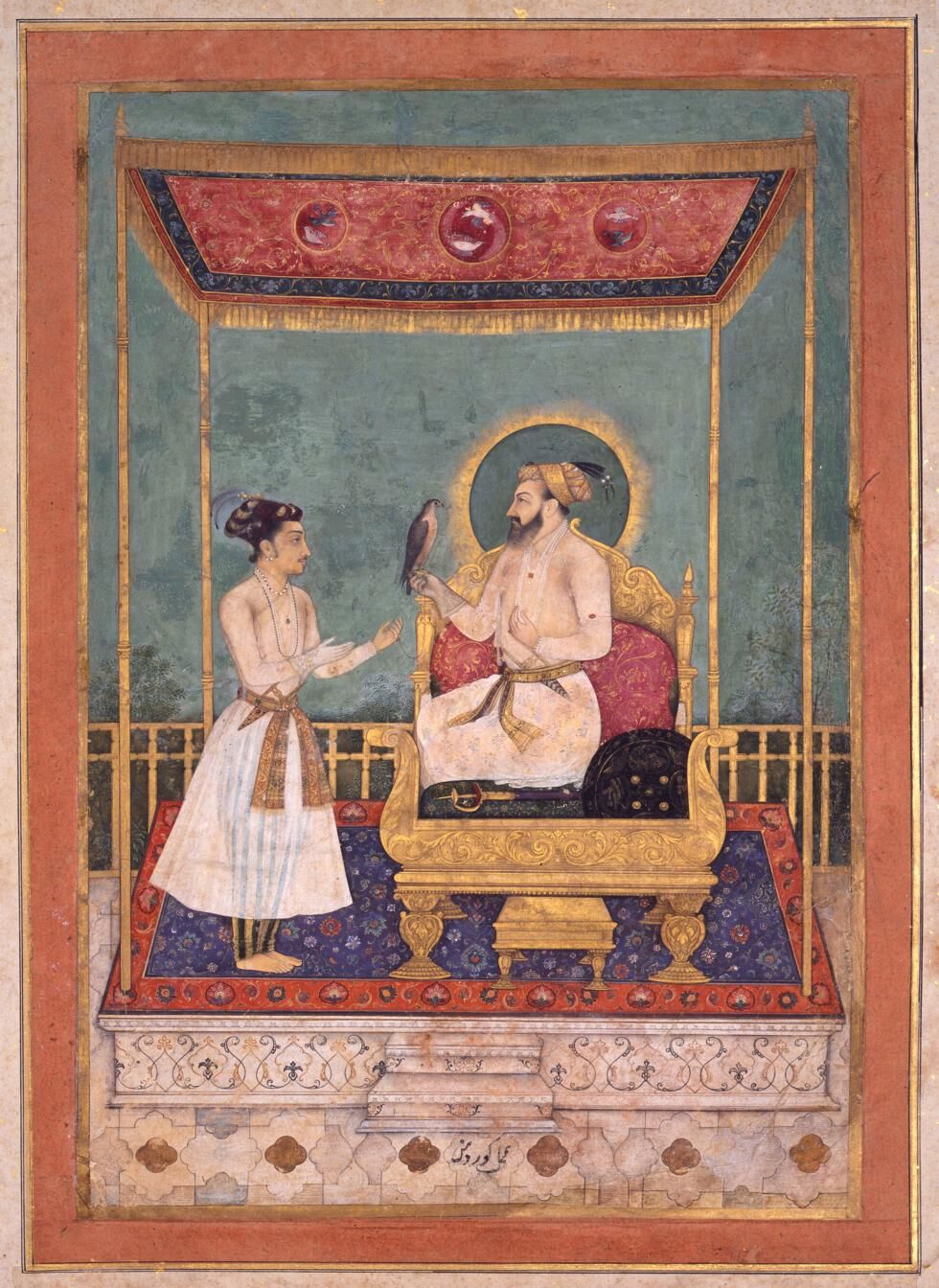 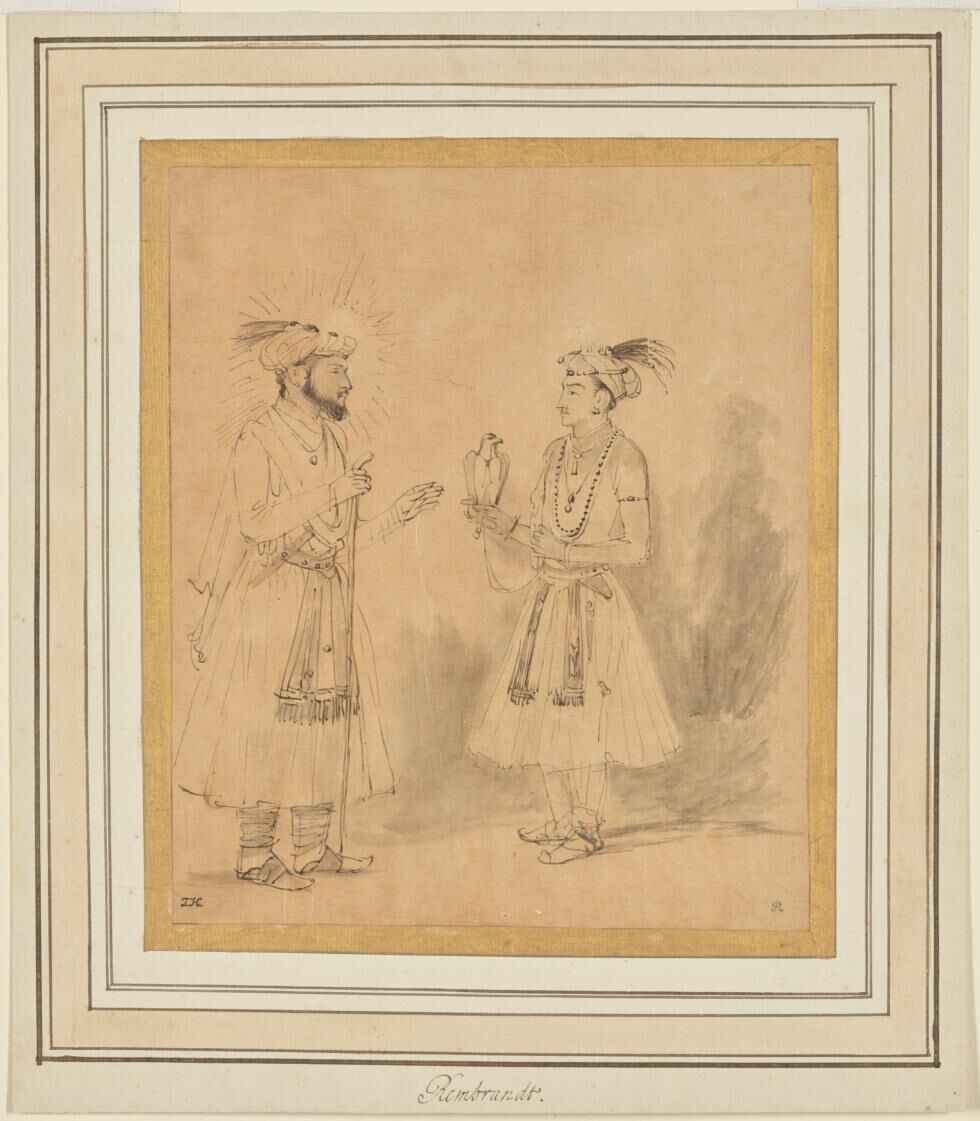 Advertisement
Today, this courtly sophistication appears highly stylized. Certain attributes define the style of painting that flourished in the empire. The characters are fixed, but the hues of the paintings are vibrant and full of life. The bright, jewel-like colors evoke the dazzling hues still beloved in contemporary India: vivid saris and Holi powders, bright orange desserts and multicolored cargo trucks. The vivid colors are as constant in the paintings as the emphasis on courtly pleasure. Prince in a Garden, Presented with a Jungle-Fowl (1590) is a typical image, with the prince and his entourage waiting amidst delicate flowers and trees in order to receive a gift. Intricate portraits of birds and flowers, garden scenes, and royal hunting escapades are all common subjects. Centaurea (1605–27)—only 6 inches by 3 inches—carefully depicts a single flower; A Turkey-Cock Brought to Jahāngīr (1612), also only 5 square inches, painstakingly illustrates each feather in a bird’s plumage, the ridges on its feet, and a scattering of tiny flowers, all within an ornate frame of painted floral motifs.
Each tiny work required an immense amount of technical skill. Before any painting was actually done, the paper was cut to size and polished to such a degree that no ink would absorb into the material. The workload was divided into outlining and coloring tasks, with many different artists assisting in the same illustration. Even as individual artists began to take credit for their work, the labor-intensive paintings were still the result of collaboration between an enormous workshop. Portraits of the artists often show them wearing glasses. The majority of miniature paintings were completed by younger artists; the intense level of scrutiny required to paint such tiny details meant weary, overused eyes simply weren’t up for the job.
The rich inks were frequently made from minerals like copper salts or cinnabar (viridian and red, respectively), but also from more biological sources, like insects, which were used to conjure crimson. The particularly vivid yellow found in the paintings has an unlikely source: the urine from cows specially fed on mango leaves.
By the time Emperor Aurangzeb died in 1707, the Mughal miniature tradition was in full decline. And as the empire weakened, the three cultures upon which the empire was built—India, Persia and Europe—reclaimed the paintings they had enabled. Many works disappeared into the private holdings of Indian officials. The Persian Shah sacked Delhi in 1739, bringing art back to Iran as loot. And, of course, vast quantities of miniatures were brought back to London by the East India Company and its representatives (today, British museums today hold some of the best miniature collections).
The Mughal Empire may be long gone, but it left behind
aesthetic sensibilities
that remain strong in India today. The affection for Mughal-style gardens is a constant on the subcontinent, and contemporary work like
Raqib Shaw
’s Garden of Earthly Delights X (2004) revives the saturated colors and extreme detail of the miniatures. The influence of the genre is even more expansive than you might imagine: An intriguing new show at the Getty Museum in Los Angeles explores the surprising connection between
Rembrandt
and Mughal miniatures, exhibiting 22 drawings Rembrandt made of Mughal Emperors alongside similar images from the empire itself.
Surya Tubach
Related Stories