At a Grown-Up NADA, Collectors Crown 80 as Emerging Art’s New 25 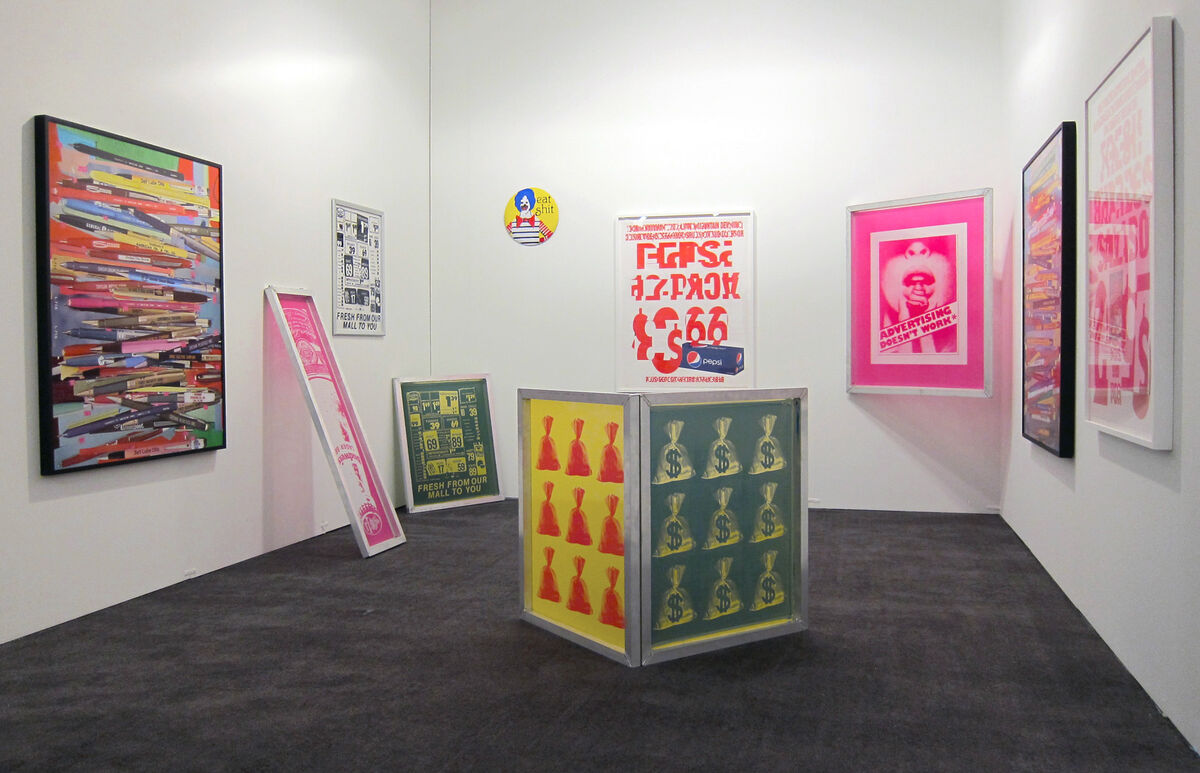 NADA opened its doors in Miami Beach in 2003 in a raw commercial space near the Convention Center. Following a five-year stint at the Ice Palace, the fair found its home in the charming, if a little rough around the edges, Deauville Beach Resort. But this year, the fair’s 13th, NADA moved down the beach to the opulent Fontainebleau. Having more than doubled in size since it first opened its doors—80 exhibitors are taking part this year—NADA bid a bittersweet farewell to Deauville, which had turned into an art world sleepaway camp—dealers, artists, and fair all nestled under one roof—each December since 2009.
“I miss staying at the hotel, but the fair is way better here,” said Zach Feuer, one of the founding members of NADA (the New Art Dealers Alliance), echoing the sentiments of nearly every dealer there. Many have lauded the new locale’s high ceilings, better services, and layout. That collectors rather than competitors tend to stay at the Fontainebleau is doubtlessly an added bonus. “It’s less punk rock,” joked James Michael Shaeffer Jr., director of James Fuentes Gallery, standing among work by
John McAllister
and
Marcel Eichner
. “That was like a home-produced album, but this is an actual studio.”
NADA, long revered for having its finger on the pulse of the top crop of new artists, has, with the shift to these swankier, roomier digs, reflected a more macro maturation of the art world of today. It is, after all, not just the venue that’s grown up. As collectors, thirsty for new material, shed their tunnel vision for twentysomething MFA grads cum market darlings, older artists have been folded into the emerging artist moniker—and into NADA booths. 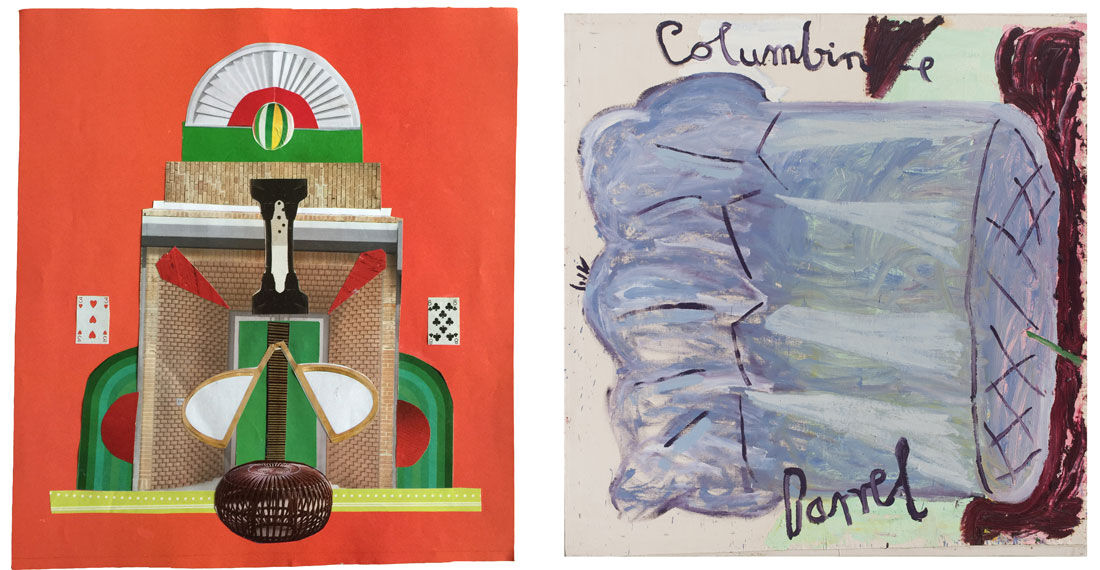 Exemplary of this shift in mentality is
Rose Wylie
, the 81-year-old British artist who has led the trend of re-emerging older female artists in recent years. “We showed her first in 2010 when she was just on the cusp of becoming known,” said Thomas Erben. “There was an article by Germaine Greer in The Guardian that said ‘the next hot British artist is going to be 76 years old’,” he laughed. At the time—which was also the first year he showed her work at NADA—Wylie’s paintings were selling for $15,000. Today, the painting that hangs in his booth, a circa 2004 rendering of Tesco supermarket flowers, is priced at $40,000. “Younger artists love her work. They think it’s so punky and free,” he added.
At Proyectos Ultravioleta’s booth, a wall of recent works by 93-year-old Viennese artist
Elisabeth Wild
, priced at $2,500 apiece, were selling well. (One third had been snatched up by the end of opening day.) And over at Feuer/Mesler, Feuer noted that work by
Elaine Reichek
(who is 72) was getting good response.
Henry Taylor
joins Reichek in his booth to represent the over-50 set, hanging alongside up-and-comers like
Jane Corrigan
and
Loie Hollowell
. Five of Taylor’s works, priced between $38,000–$70,000, sold on day one. 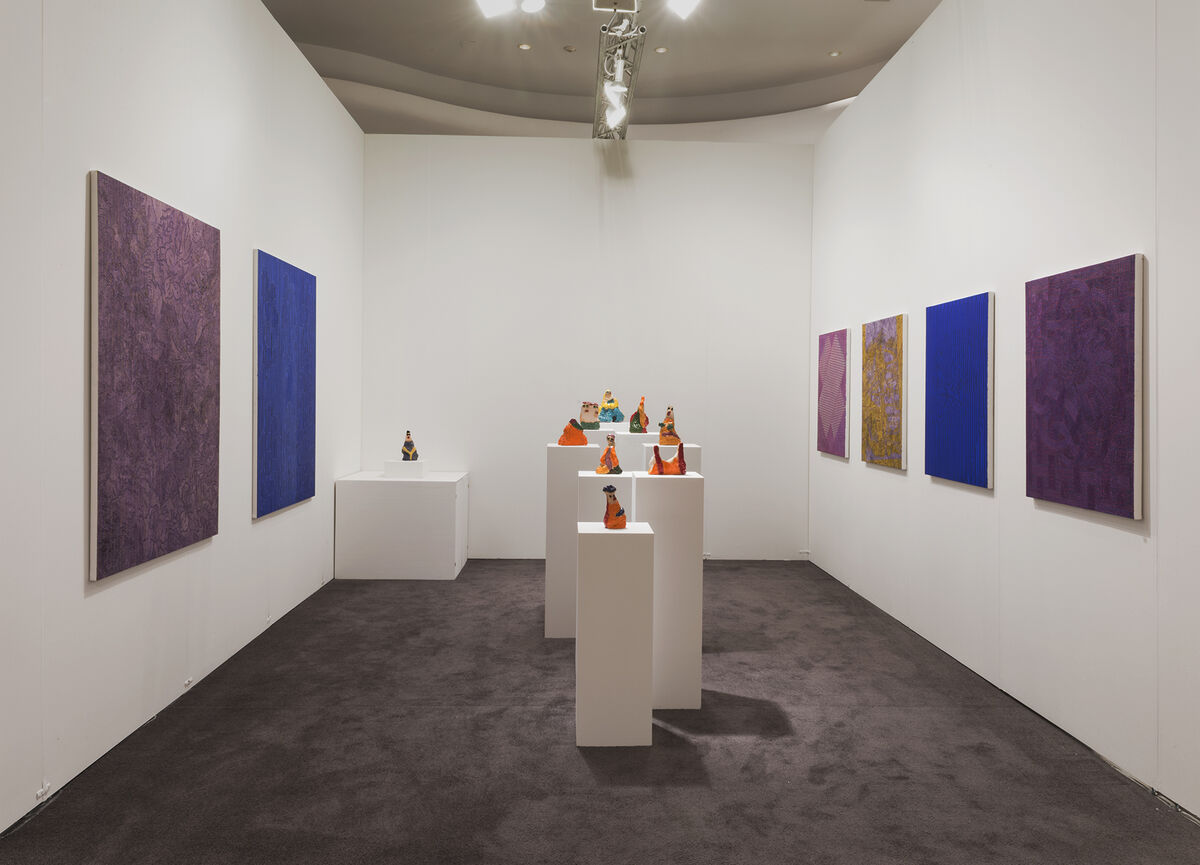 Advertisement
Nearby at Kerry Schuss, the ceramic sculptures of 84-year-old artist Alice Mackler (nearly sold out in the $6,000 to $12,000 range) take center stage amid abstractions by 29-year-old painter
Chip Hughes
. On the booth’s exterior, Mackler’s youthful collage paintings, pulled from fashion magazines, are also selling well, priced at $3,000. “She’s been making art her whole life, but it’s only in the past few years that she’s gotten recognition,” Schuss said of Mackler, whose work is currently on view in “Unorthodox” at the Jewish Museum. “She’s emerging at 84, and that’s not so bad. Sometimes older artists have a whole life of experience that goes into their work.”
Over at Derek Eller Gallery, meanwhile, two oversized mugs by Peter Shire sold for $5,000 each. The works double down on two recent trends: contemporary ceramics and the art world’s renewed love affair with the Memphis Group, the 1980s Milan-based collective of which Shire is the sole American member. This, and the equally enthusiastic response to another pair of mugs on day two of the fair, bodes well for Shire’s forthcoming exhibition at the gallery’s new space in 2016 (and at Berlin’s Peres Projects in March). Eller noted that Shire is by no means unknown, but existed more exclusively in the world of ceramics, furniture, and design for many years. “He’s being embraced by a different part of the art world,” said the dealer. A giant painting by the young Los Angeles-based artist
Despina Stokou
hung on the booth’s other wall on Friday (a replacement for one that sold, and available for $28,000). Coincidentally, Eller said, he first met Shire at Stokou’s suggestion, eventually leading to the artists’ two-person show earlier this year. And it’s pairings like Stokou and Shire, Mackler and Hughes, that make both brackets all the more dynamic. 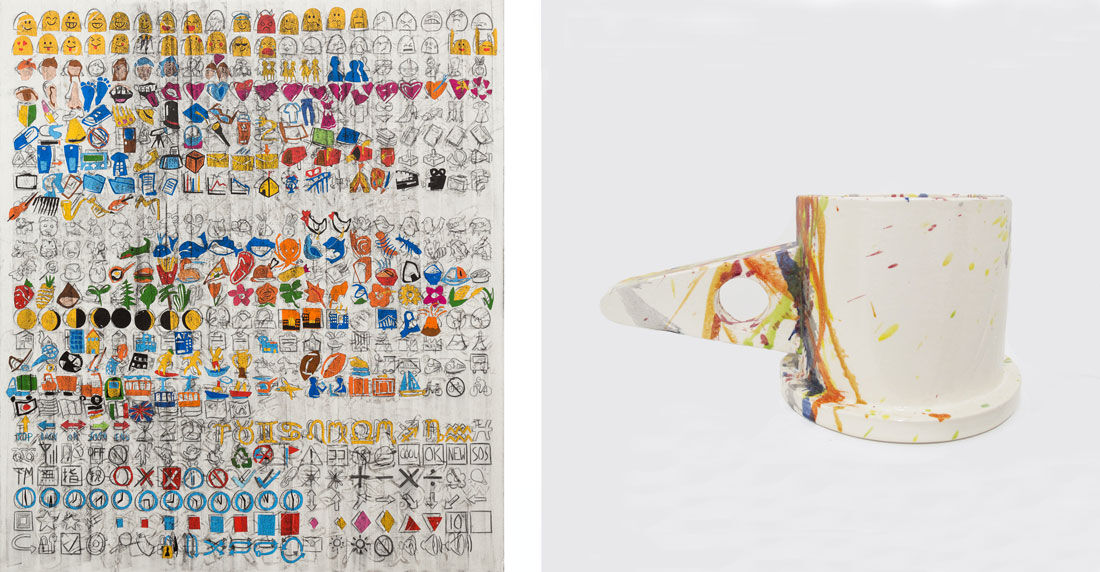 NADA’s role as a Who’s Who of the brightest stars of today’s young art world has of course not diminished. In the wake of her November Performa commission and a performance this week at ICA Miami, L.A.-based artist Erika Vogt fills Overduin & Co.’s booth with sculpture produced during a 2013 residency at EMPAC. The works were made there for her Frieze Foundation-commissioned short film, and have already landed in a great collection, gallery owner Lisa Overduin noted.
At Cooper Cole Gallery, two works by MoMA PS1 “Greater New York” star
Sara Cwynar
are priced at $10,000. Oversized depictions of writing utensils that deal with vintage imagery and kitsch, all three editions of Pens, as well as the three editions of Pencils, had sold by Friday evening; one went to a collector in Dubai and another to Tokyo, while Canadians and Americans snagged the others. Another “Greater New York” favorite,
Eric Mack
, fresh from his residency at the Studio Museum in Harlem, has two works at Moran Bondaroff’s (formerly OHWOW) booth. His peg-board work, Black Cornucopia (2015), priced at $7,000, had sold (as had other similar pieces). “It does feel like this is his year,” noted the gallery’s Jessica Witkin. The director of sales added that the booth had nearly sold out as of press time. A large wall sculpture by
Brian Belott
is among those successful transactions ahead of the artist’s January show at the L.A. gallery. The wall-hung Chime light open the korg (2015), priced at $15,000, consists of calculators and remote controls nestled in cotton, paper, and acrylic. Bellot also features prominently over at 247365 (alongside work by
Zach Bruder
,
Lizzie Fitch
, and
Henry Gunderson
), where smaller collaged pieces line the walls at $3,500 apiece. The best of those works contains a slightly hidden bottle of hair gel. 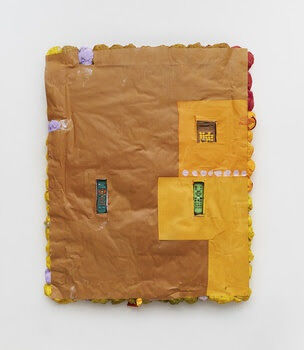 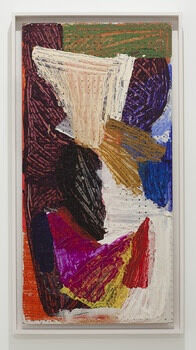 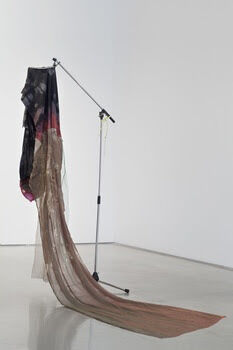 Eric N. Mack
A gift, 2015
Moran Bondaroff
Based on the buzz throughout Miami Beach today—blissed out artists, collectors, and dealers all beaming from strong sales, whether they’d been buying or selling or both—the grown-up NADA prevails as an unchallenged place for artists. No matter where that place may be.
—Molly Gottschalk
Explore Miami Art Week 2015 on Artsy.
Related Stories