At Art Basel in Miami Beach, the Art World Slows Down and Wisens Up The scene in Miami Beach was much the same as at October’s Frieze London, where measured sales during the fair’s first hours had, by its close, summed up to one of its most high-volume iterations. The Miami Beach Convention Center’s halls were packed on the opening day of this, the fair’s 14th edition. Nary a major art-world figure’s presence was missed during the vernissage. And Art Basel in Miami Beach’s particular knack for drawing major celebrities (including Leonardo DiCaprio, who was spotted at Sadie Coles HQ’s booth chatting with
Chuck Close
and eyeing
Urs Fischer
’s Iron (2015) with his head turned sideways as if to imagine hanging the piece in portrait orientation) certainly persists. But the flash, fireworks, and impulsivity of past years has been replaced by a steadier, if no less profitable, gait. 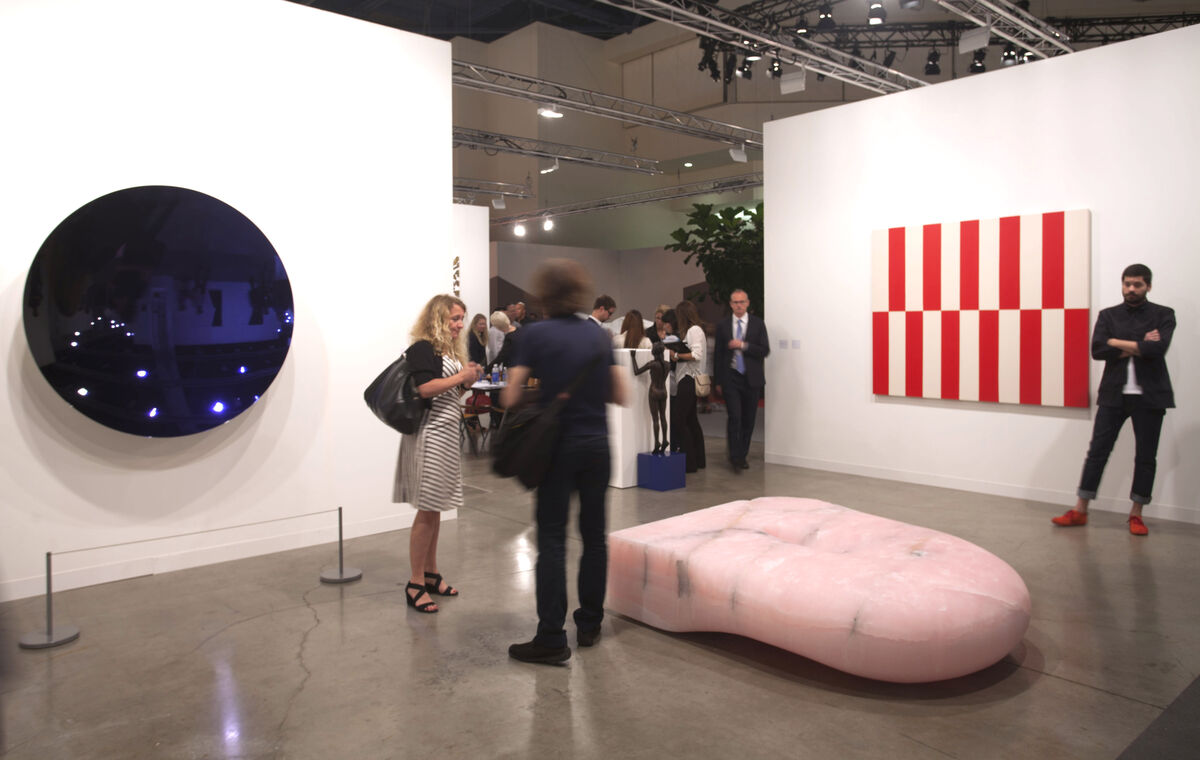 “I don’t think things are slowing in terms of the amount of work that’s being sold. But people are pausing to think about what they’re buying, which is ultimately a positive thing,” said Lisson Gallery scion and International Director Alex Logsdail. “For a period, there was this snap decision-making of, ‘Okay, I’ll take that and that and that,’ and that isn’t very healthy. Snap judgments make people buy things that they don’t necessarily love or they haven’t necessarily thought about all that deeply,” which Logsdail suggests might make them more prone to hold onto works for far less time than might otherwise be the case. Look no further than the flip-prone art market of 2013 and 2014 in comparison to the more modest turnover of the past 12 months, for proof.
That doesn’t mean transactions lagged for Lisson, where Logsdail was pleased to report that a
Stanley Whitney
painting had gone to an American museum for an undisclosed sum. Other sales included Cory Arcangel’s Shania / Lakes (2015) for between $60,000–90,000, Ryan Gander’s I Be… (V) (2015) for between £70,000–100,000, as well as
Jennifer Allora & Guillermo Calzadilla
’s Solar Catastrophe (2015), Rodney Graham’s Nautical Scene with Loudhailer (2004), and a
Carmen Herrera
, all for undisclosed prices. While the gallery rarely fails to perform strongly, it comes at a particularly welcomed time, with Logsdail hinting that an announcement of the opening date for the long-awaited New York space is just weeks away. 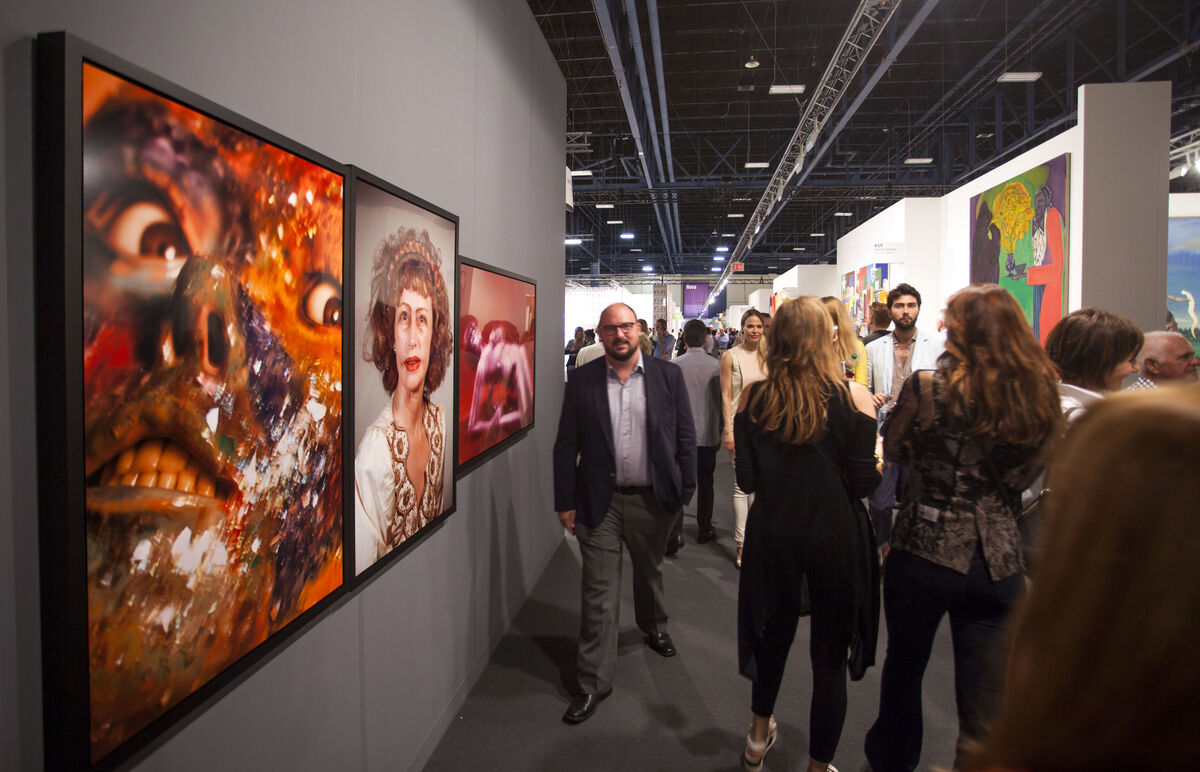 Advertisement
Sean Kelly, of the eponymous gallery, also noted a shift in his Art Basel experience, which saw the gallery have “way more sales coming into this fair than we ever have before; it increased by an exponential amount.” The exact reason for what Kelly dubs a higher-than-ever-before click-through rate (his words a promising indicator of galleries’ increasing use of web analytics to track their performances) was yet unclear. However, Kelly added that it’s at least partly due to the fact that “the fair’s audience has matured.” More mature collectors bring with them greater clarity of what it is that they’re after, whether on the floor or in advance of the opening. (Other dealers suggested that these more informed collectors also bring fewer art advisers selling them on a boilerplate list of hot names.) At Kelly’s booth those collectors copped Antony Gormley’s £350,000 Cumulate (2011) and works by Los Carpinteros, Jose Dávila, Ellsworth Kelly, Idris Khan, and
Callum Innes
, among others. “We literally don’t have anything left,” added the dealer.
A number of usual suspects reported sales that broke the million-dollar mark. Pace sold 16 works by Louise Nevelson for up to $1 million. At Hauser and Wirth’s booth, Paul McCarthy’s White Snow, Dopey, Black Red White, Black (2011-2015) went for $1.5 million to an American collector. Mike Kelley’s monumental acrylic-on-wood panel work Untitled 5 (2008-2009) also sold from the gallery for an undisclosed sum that almost surely nestled in the seven figures. And Galerie Gmurzynska sold a
Robert Indiana
for $1.5 million.

Gmurzynska celebrates its 50th year in the business in 2015. And their Art Basel in Miami Beach booth is a dramatic send-off to the milestone. Put together by legendary curator Germano Celant, who currently serves as the Artistic and Scientific Superintendent of the Fondazione Prada, Milan, the presentation brings together over 100 works by the likes of
Kazimir Malevich
,
Joan Miró
,
Pablo Picasso
,
Robert Motherwell
,
Jean Dubuffet
, and
Yves Klein
in a salon-style hanging. First exposed to the gallery during its early days in Cologne, Celant says he was impressed by its founder, Antonina Gmurzynska, and her choice to show members of the Italian and Russian avant-gardes at a time when their works’ Communist and Fascist ties meant that “no one wanted to touch it.”
Other sales from the booth on opening day included a work by
Fernando Botero
for $500,000–600,000. (His signature bulbous women are cheekily juxtaposed with the decidedly more porn-y females of
Mel Ramos
high on one wall.) A
Wifredo Lam
sold for $80,000, as did a piece by
Alan Jones
for $40,000. By Celant’s design, the booth is a slow burn, however. “I didn’t want to curate a show about the Russian avant-garde, so I decided to make an avalanche instead,” said the curator of the hanging, which leaves barely any wall in view. “People have to stop, to spend time to figure out each artwork. They have to look for ideas rather than value because there’s too much to take in.” Celant says the booth is “about questioning what a fair means.” And, as Art Basel in Miami Beach’s first day continued to show, that meaning is changing. “This idea of who is the best; who is the top; who is most valuable? It’s ridiculous,” added Celant. Collecting art, he says, shouldn’t be “about collecting value; you also collect ideas if you’re smart.” So, it seems, collectors are wisening up.
—Alexander Forbes
Explore Art Basel in Miami Beach 2015 on Artsy.
Related Stories