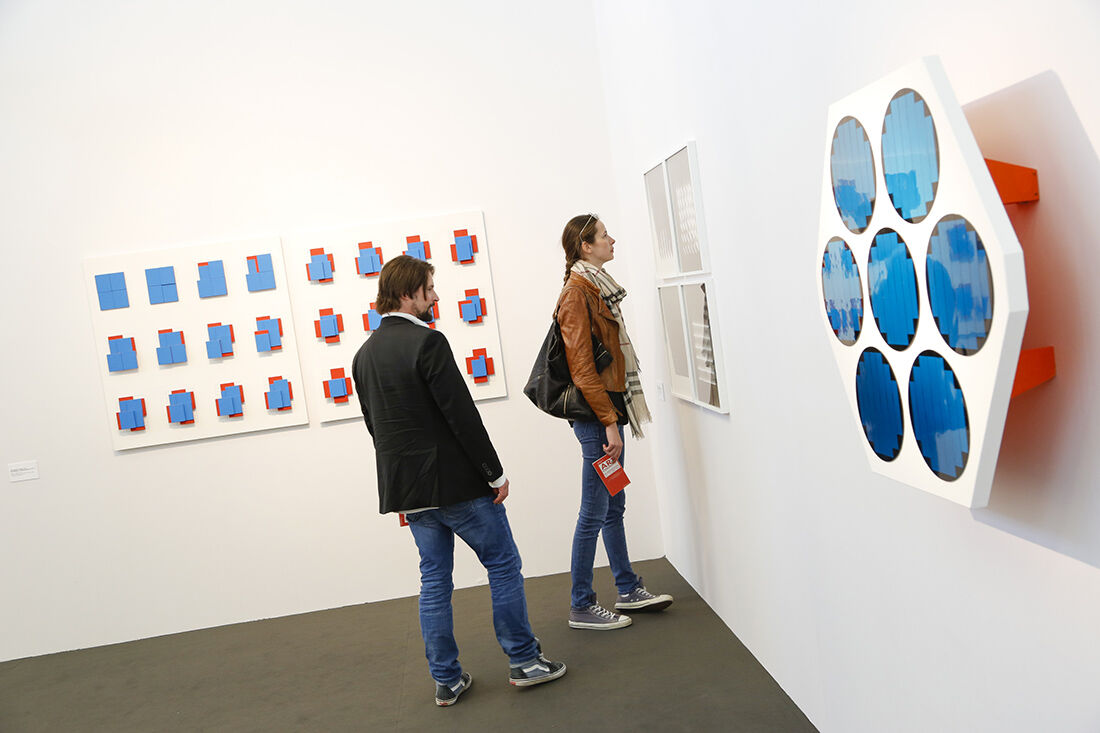 For several years now, Art Cologne has given over part of its floor space to an institution-style presentation. These have included a display of video works from the Julia Stoschek Collection and mini-retrospectives of
Dieter Roth
and
Panamarenko
. In 2015, the fair gets what’s likely its most thoroughly museum-ready show to date. Curated by a triumvirate of Budapest-based galleries—acb, Kisterem, and Vintage—“Bookmarks” assembles 21 artists tracing 50 years of Hungarian art history, from historical, yet still underappreciated, figures like
Bak Imre
to contemporary collectives Little Warsaw and Société Réaliste.
The exhibition, which is located in a 250-square-meter pavilion constructed directly in the middle of Art Cologne’s entryway, found its way to the fair somewhat by chance. “Bookmarks” was presented in Budapest once before, in 2013 and with a slightly different roster of artists, a fact to which fair director Daniel Hug was alerted while on a trip to Hungary as part of his work for the Moholy-Nagy Foundation. “I loved the idea because the three leading galleries got together and curated this show about conceptual art in their country,” he told Artsy. At first, Hug considered working with a museum to give the exhibition greater exposure. However, he soon realized that in doing so the exhibition would lose its essence as a gallery-led initiative, something that’s also near and dear to the fair he runs. “I felt like this is exactly what Art Cologne is about,” Hug explains. “The fair was founded by galleries—not dealers—to support the German art market.”
“Bookmarks” originates from a similar place. “We felt that the exhibition program [in Hungary] is lacking this type of retrospective,” says Kisterem’s Margit Valkó. “The big institutions, museums, and Kunsthalle in Hungary are slower. With this collaboration we could create more context for the works each of the galleries present, work I consider very relevant to the present.” 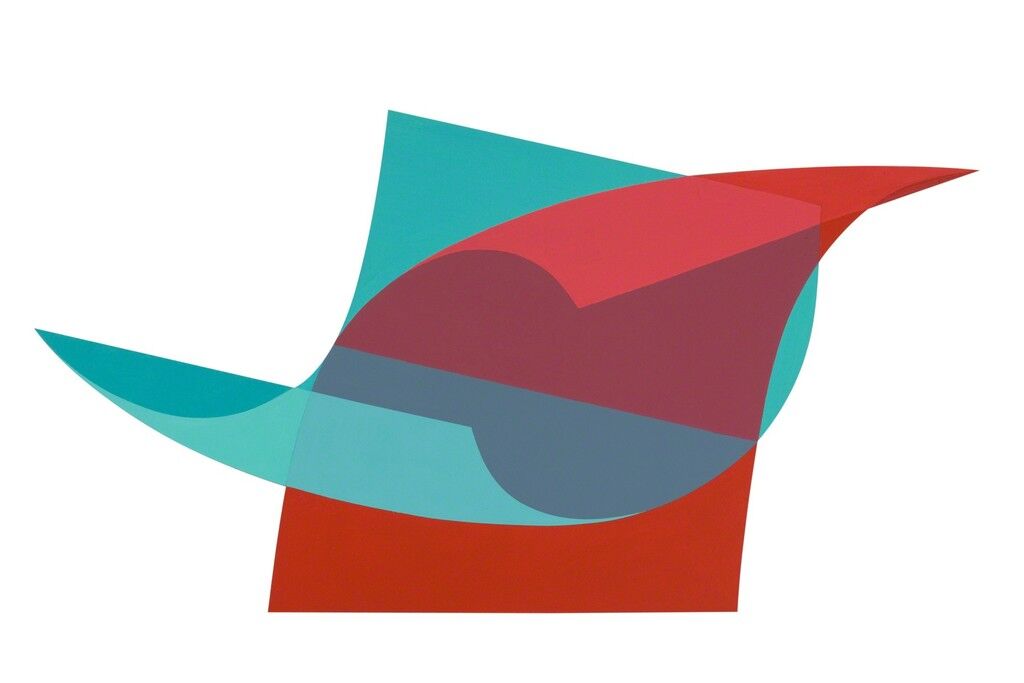 Dóra Maurer
IXEK No7 (Intersections), 2010
Vintage
Due to political realities in the 1960s, ’70s, and ’80s, progressive and neo-avant garde art practices were banned or actively pushed to the margins by the Hungarian regime. As Vintage’s Attila Pőcze explains, “The government sorted artists and artworks into three groups: Supported, Tolerated, and Forbidden. Many of the progressive art events took place in private places or suburban cultural houses, certainly not in the official institutions.” All of the historical artists presented in the exhibition fell into the latter two categories.
“Non-figurative, abstract painting or sculpture was a decadent, bourgeois trend,” in comparison to government-sanctioned
Socialist Realism
, Valkó adds. Even more radical practices like “reactions to any kind of power,” or the infiltration of “hippie culture, like nakedness in happenings and performances,” was strictly out of the question, at least officially. 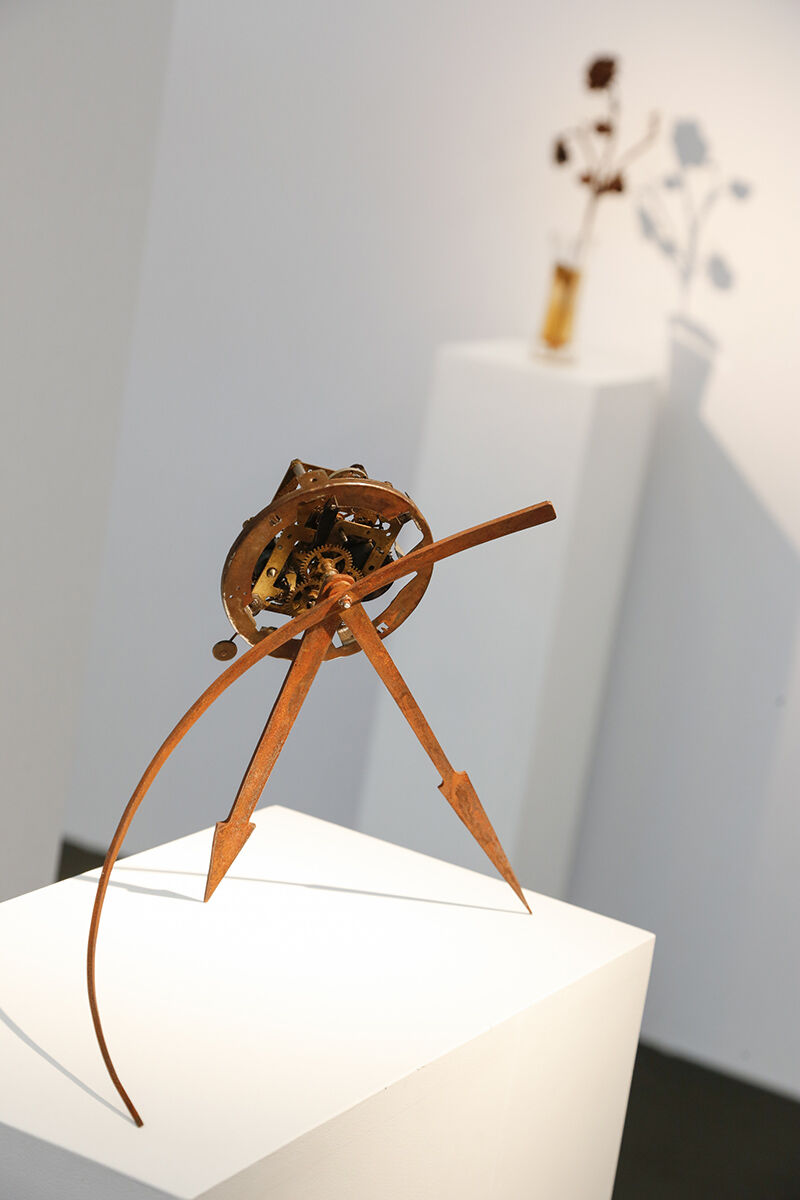 Advertisement
For artists such as Dóra Maurer, Miklós Erdély, or Tamás Szentjóby, that had serious consequences. “There were compromises by many artists, but the artists presented at “Bookmarks” remained progressive and incorruptible,” says acb’s Orsolya Hegedüs. It’s an attitude “for which they paid with the lack of publicity, with existential difficulties, and in more extreme cases with suffering harassment from the police.”
However, perusing “Bookmarks” one gets the sense that these difficulties also had the effect of concentrating and intensifying the discussions, both aesthetic and conceptual, at play within their works—and, indeed, their influence on the next generation. Among many others, exhibited artist Ádám Kokesch was a student of Maurer’s. And though his works certainly take a contemporary form in comparison to those of his professor, her influence is unmistakable. Throughout “Bookmarks,” whether by curatorial vision or not, the cross-generational conversation is palpable. 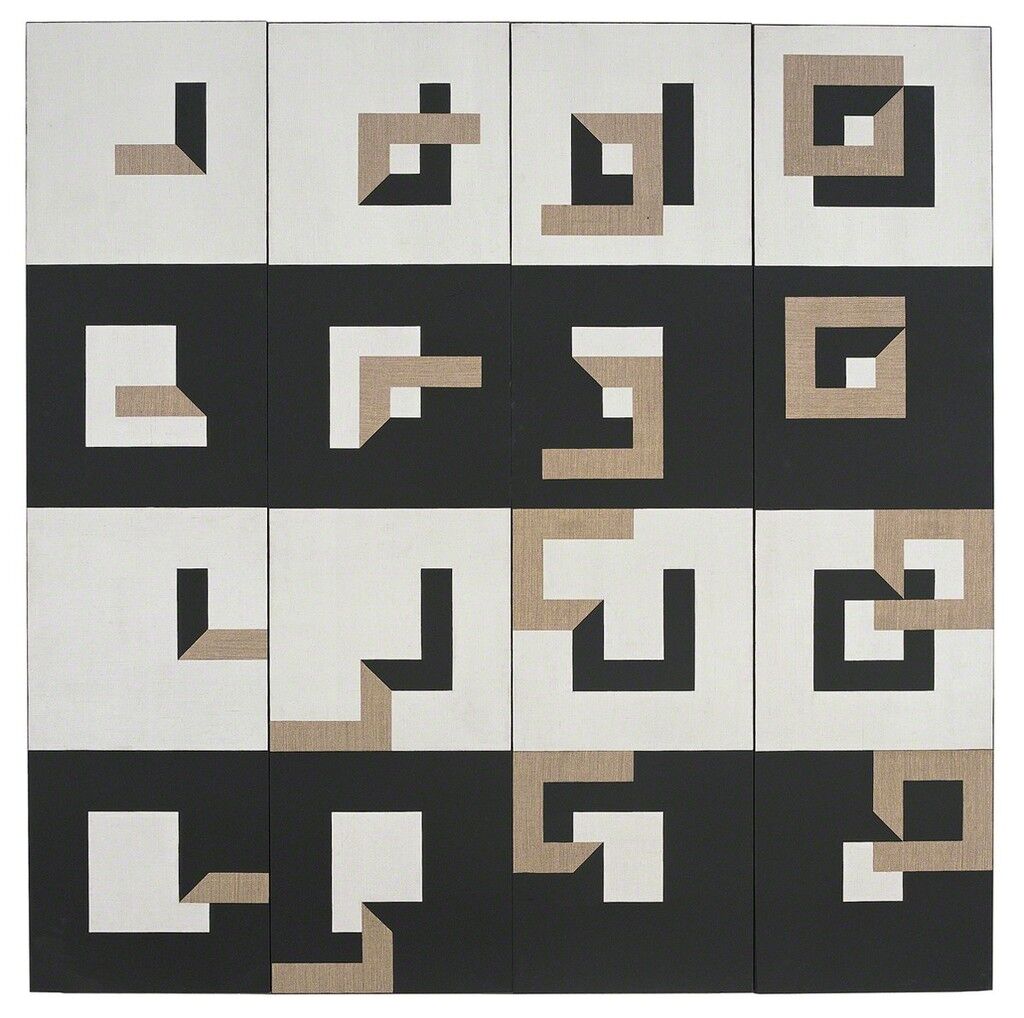 Tibor Gayor
Q 4 Montage-demontage, centripetale-centrifugale 1-4, 1975
Vintage
Unfortunately, it’s not just in the artworks that similarities arise between the Hungarian art scene then and now. While the gallerists report that artistic freedom is not in any direct danger, government-funded institutions, and particularly the Műcsarnok (also known as the Kunsthalle Budapest), have taken a turn away from showing international artists—and to some extent even Hungarian artists of international relevance, like those on view in “Bookmarks.” They have instead supported more parochial art practices focused on traditions from within their nation’s bounds. “It is perhaps not restriction, but the program of the Kunsthalle has changed in a direction that is non-relevant as contemporary ‘high’ art,” says Valkó. Pőcze echoes the sentiment, explaining, “the government nominated a loyal artist association called the Hungarian Art Academy as the owner of the Kunsthalle.”
The Academy is heavily subsidized by the current government, leading some to suggest that its motives aren’t purely in art’s best interest. Next week marks the opening of the third annual “National Arts Salon” at the institution, an exhibition which claims to show “the more traditional fields of Hungarian art,” and, rather confusingly, “interprets the notion of progressivity on a broader scale than radically new artistic invention and expansion.” 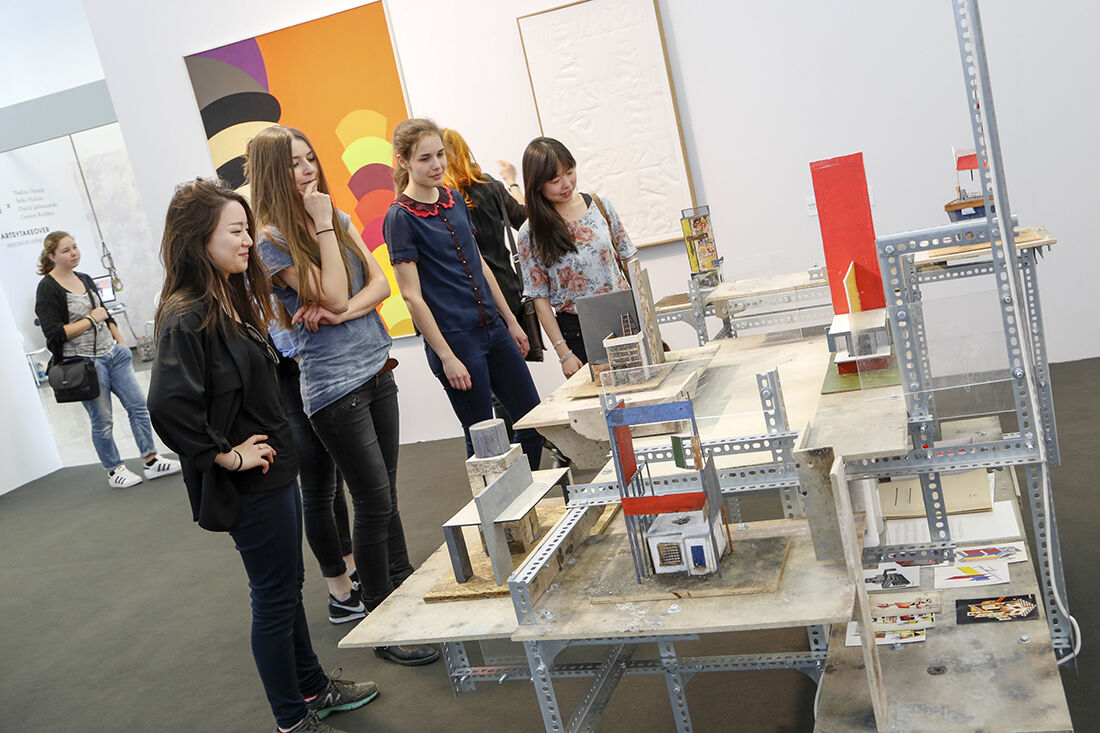 The problematic wide-angle question surrounding such exhibitions—and what, to a certain extent “Bookmarks” is out to push back against—is whether Hungarian institutions are being used as fuel to an already quite steadily burning fire of nationalistic tendencies within the country. Hungarian Prime Minister Viktor Orbán and his conservative Fidesz party are facing an increasingly vital challenge from extreme-right political movements in the country, something that hasn’t escaped Hug’s attention. “For me, it was also important to do this ‘Bookmarks’ exhibition right now as a statement to the Hungarian government, which has taken kind of a terrible turn,” he says, adding that he hopes the exhibition can “point out that there is tremendous interest in progressive art practices,” both within Hungary and from outsiders as well.
Despite that interest, which will have certainly grown in Cologne this week, prices for even those among the most established Hungarian artists on view remain remarkably low. Early works from the ’60s by Bak Imre, for example, can still be had for around €10,000. “Poland was discovered in the early 2000s and then about 10 years ago people got really hot on Romania. Hungary hasn’t really been addressed,” notes Hug. With the art market continuing its ever more global and pricey climb, it’s hard to imagine that being the case for long.
Alexander Forbes is Artsy’s Consumer Marketplace Strategist. He was previously the Executive Editor of Artsy Editorial.
Explore Art Cologne 2015 on Artsy.
Related Stories