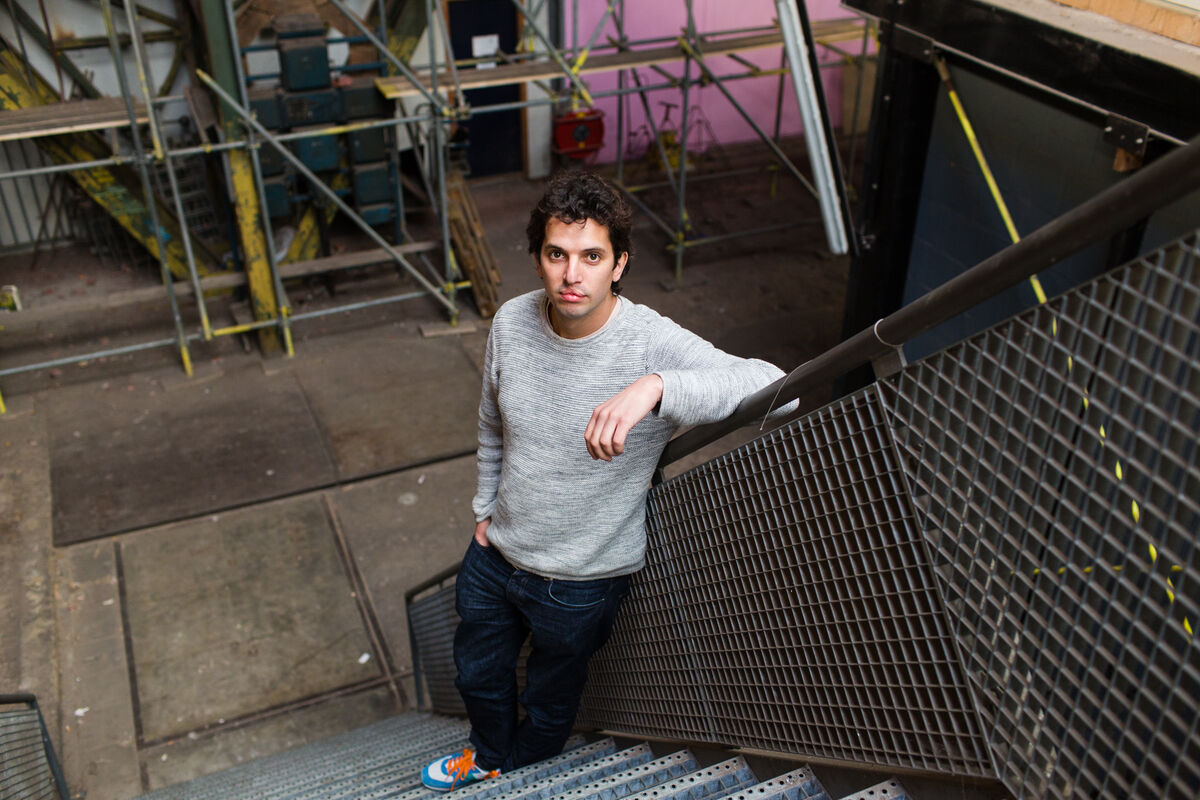 Portrait of Lex Pott in his Amsterdam studio by Jordi Huisman for Artsy.

Lex Pott
begins many of his sentences with “luckily,” but spend an hour with the young Dutch designer and you quickly realize that luck has little to do with his success. Pott graduated cum laude from the Design Academy Eindhoven in 2009 and was named No.1 Design Talent in the Netherlands by the newspaper de Volkskrant in 2015. For this year’s edition of Design Miami/, Pott joins the studio Calico Wallpaper in a Curio (one of the fair’s immersive environments) organized by New York design store The Future Perfect. The showcase features Pott’s new works in stone and Calico’s custom wall covering, which is colored with pigments derived from the same Belgian bluestone used in Pott’s furniture designs. This is the designer’s first appearance at Design Miami/, not to mention his first trip to the U.S. (He says he’s honored and even seems a little surprised to be included in the fair.) Bearded and a little shaggy on top, Pott motions enthusiastically with his hands when we speak about his research-based design philosophy in the lead-up to the fair. 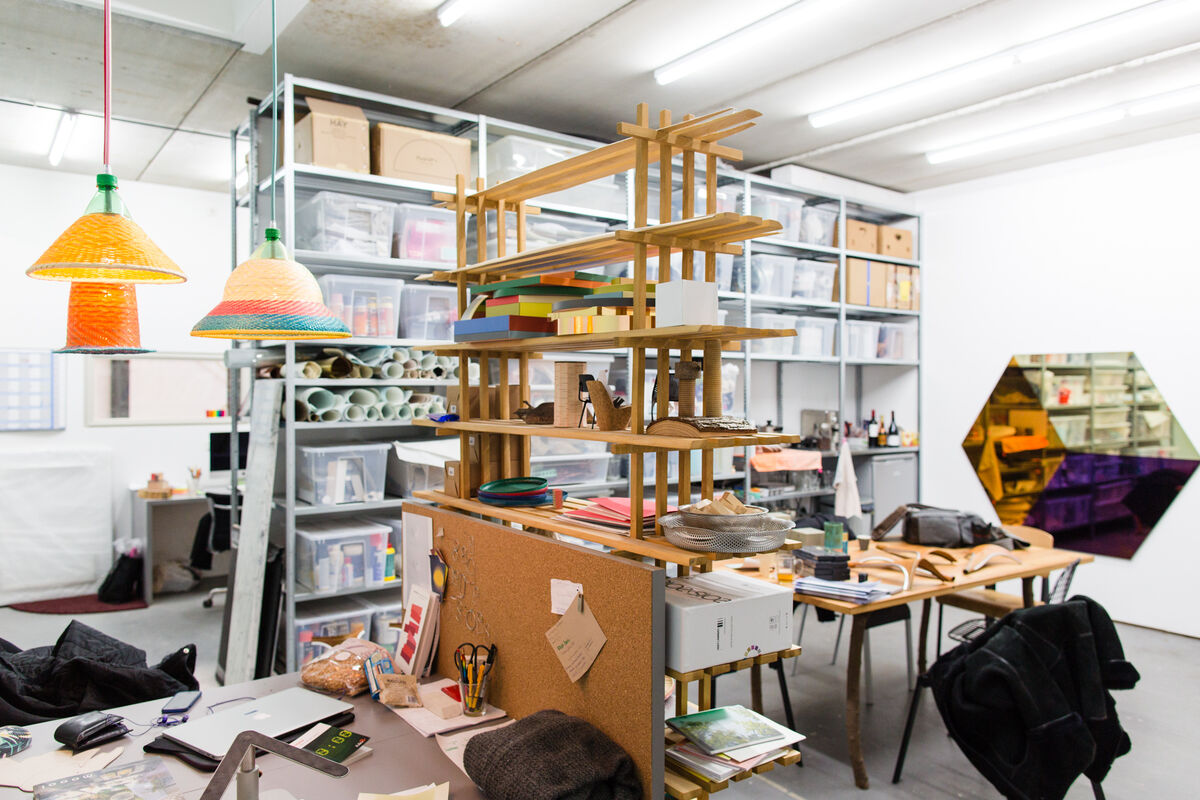 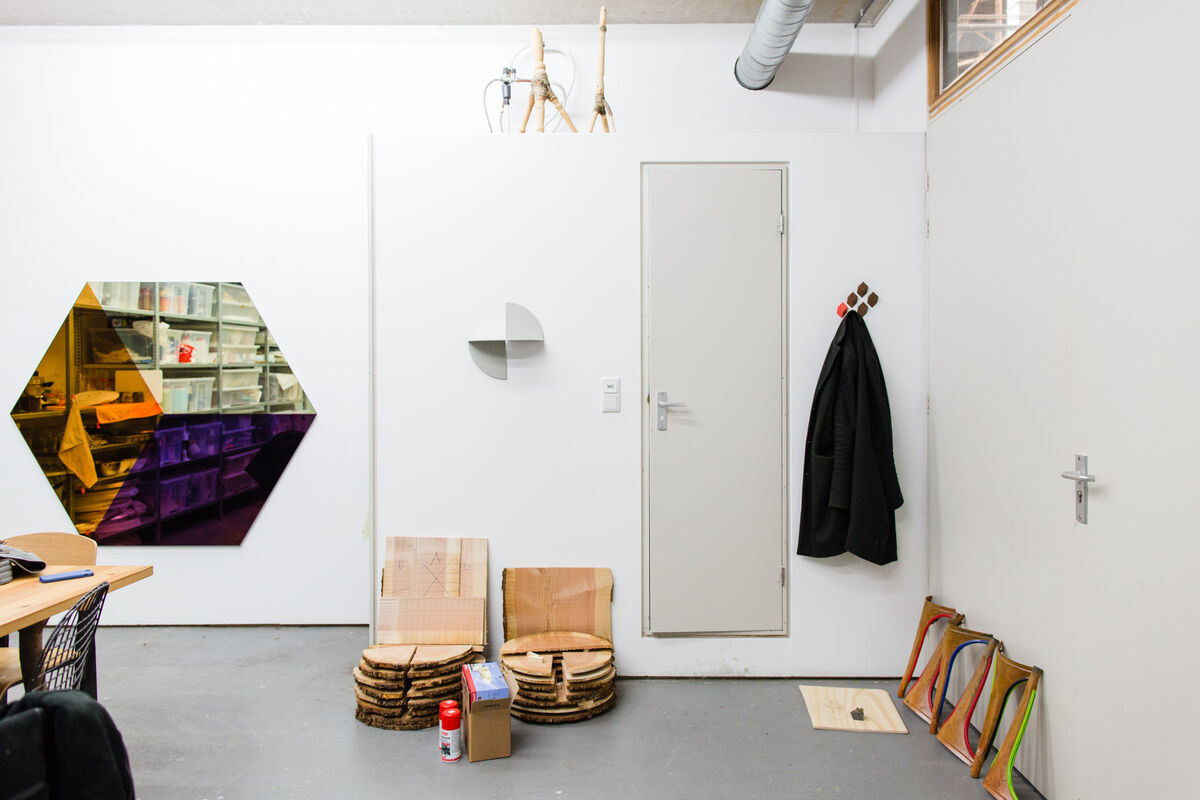 Housed in a former shipyard on the outskirts of Amsterdam, Pott’s studio is modest. A small workshop is equipped for constructing models and prototypes, but most production is outsourced to specialized companies. The building itself is a monumental structure, with steel beams bisecting bright walkways. The space has a persistently industrial feeling, even though its current tenants—mostly architects, designers, and other creatives—work on a more intimate scale.
Pott is the child of artists (his father is a painter and his mother now teaches), and his childhood taught him both the benefits and risks of choosing to work in a creative field. He grew up in the glow of the Amsterdam art scene, often tagging along to museums and cultural events, but he also became well aware of the financial struggles many artists face. “As a child I was always fascinated by these creative worlds,” Pott says. “But I also wanted to make it a bit more applied and also realistic. I wanted to make my living out of it.” Inspired by a graduation show at the Design Academy Eindhoven, he saw a middle path between artistic freedom and practical function, between art and industrial design. He describes attending the Design Academy as “a sort of heaven” where diversity and idiosyncrasy were encouraged. The work there impressed him as being “awkward and outspoken.” 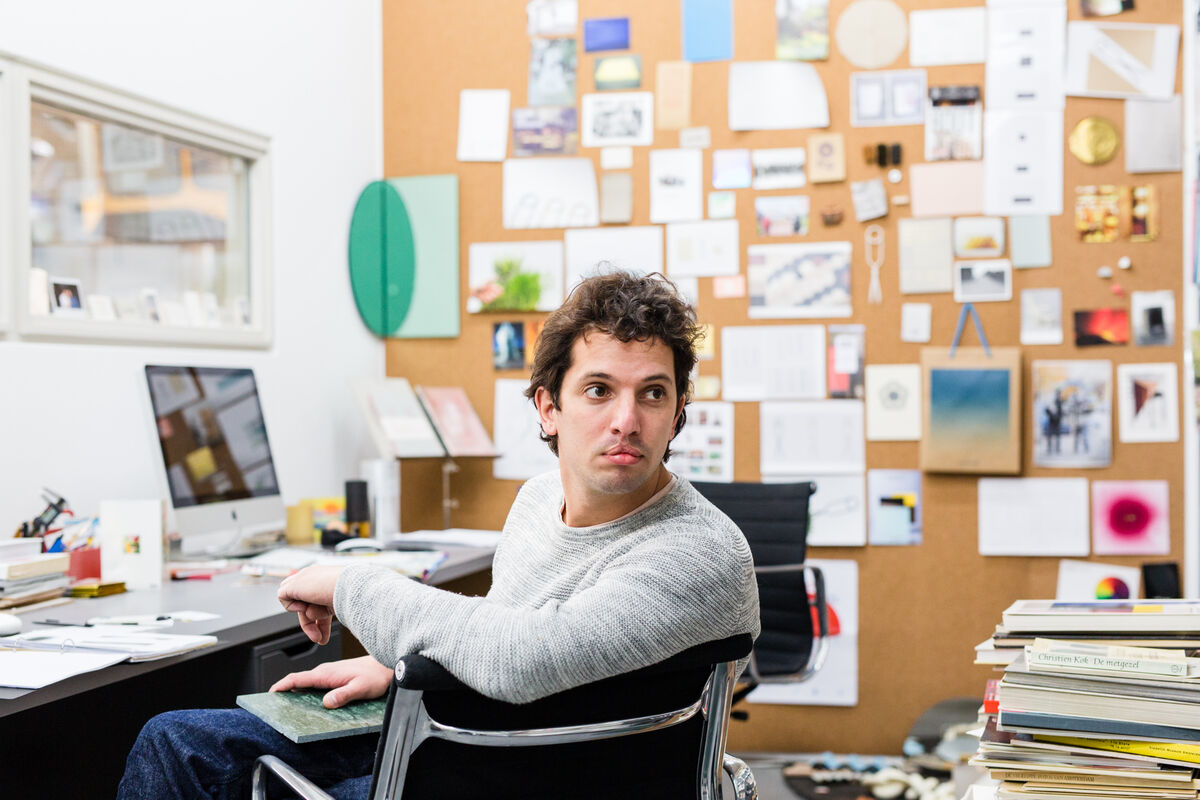 Portrait of Lex Pott in his Amsterdam studio by Jordi Huisman for Artsy.

Advertisement
It was at Eindhoven that Pott first embarked on a project that even his professors viewed as too ambitious, designing a large marble table that combined machine cuts with natural breaks in the stone. Scale it down, his professors suggested, make something smaller. They weren’t trying to demotivate him, Pott concedes, just give him a reality check. He persevered, however, convincing a quarry and a Dutch stone producer to sponsor the project. The result—a table from one massive block of stone—was a dialogue between organic, naturally defined shapes, and the clean, geometric language of industrial production.
This table became the basis for Pott’s commission for Design Miami/, a collection of four furniture pieces and a series of small accessories. When David Alhadeff, founder of The Future Perfect, met Pott, he was impressed by the designer’s talent as well as his restraint. “For the ‘Fragments’ collection, I feel confidence in Lex’s ability to see the beauty in natural circumstance,” he says. “Rocks broken and lying around become table bases. Rough boulders are contrasted by polished planes. The work is about showcasing the natural beauty of an object as much as it is about creating something new.” As far as Pott is concerned, the collaboration couldn’t have gone better. He continued to have ideas for the project even after the major pieces had shipped, and realized that if he wanted to include more work it would have to fit in his suitcase. “So the last vase is being produced now,” Pott admits. “I will pick it up tomorrow and fly on Saturday with the vase in my hand luggage.” 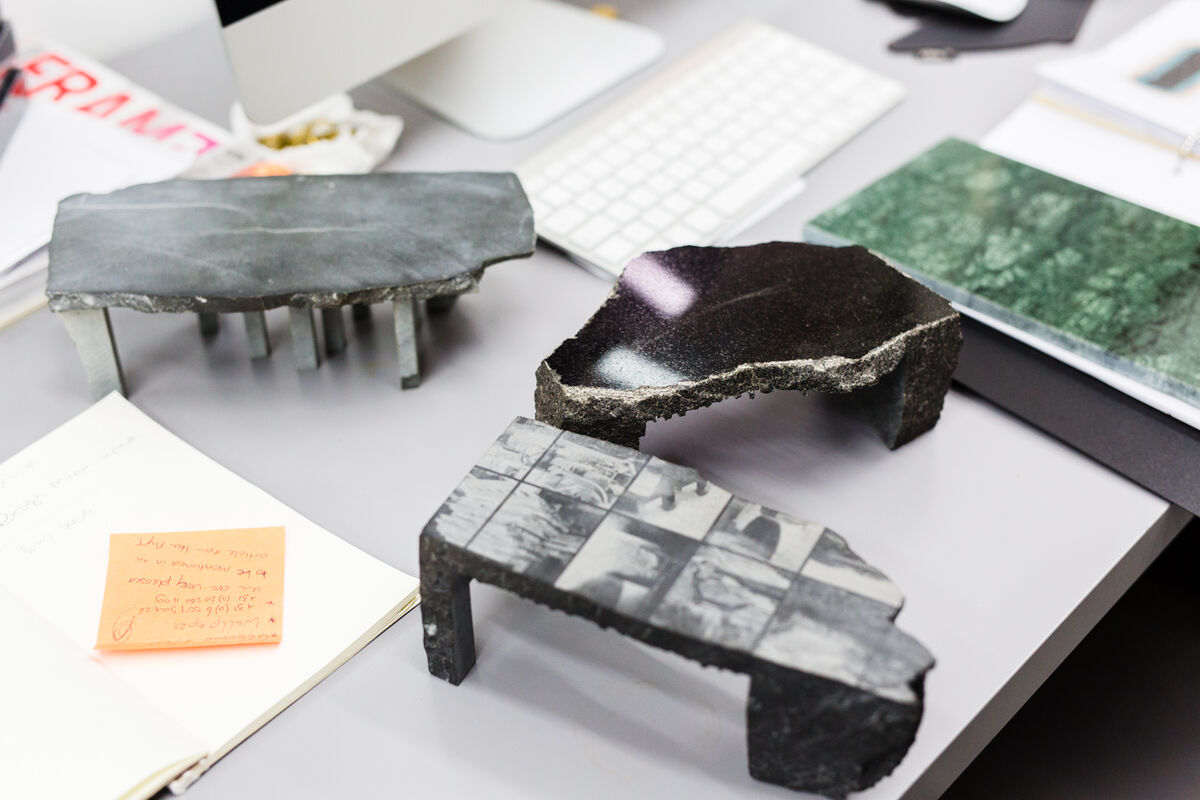 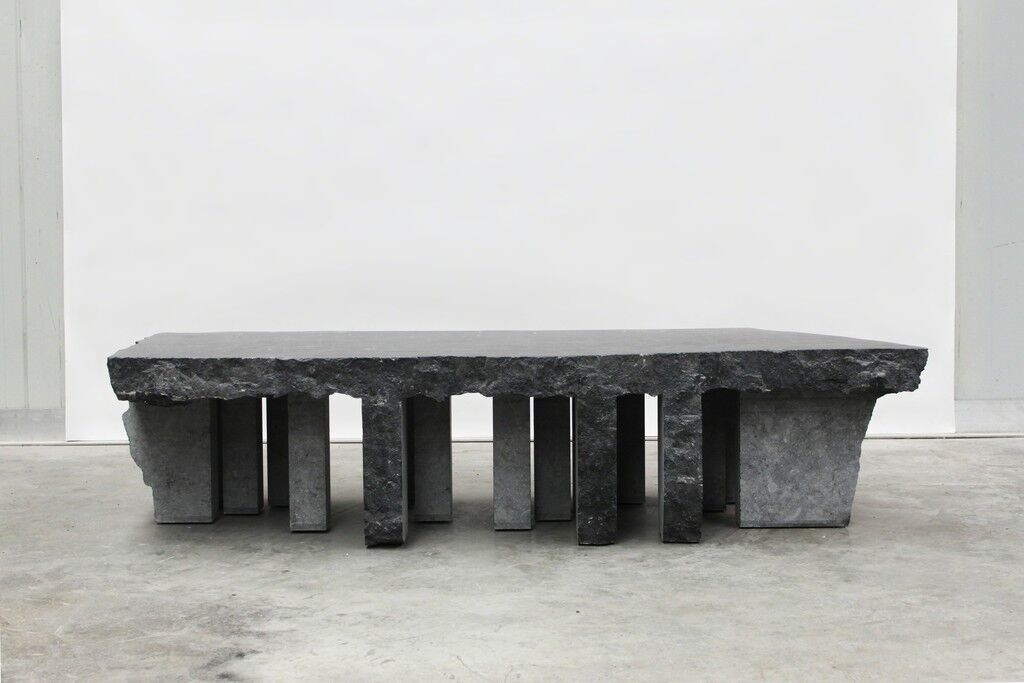 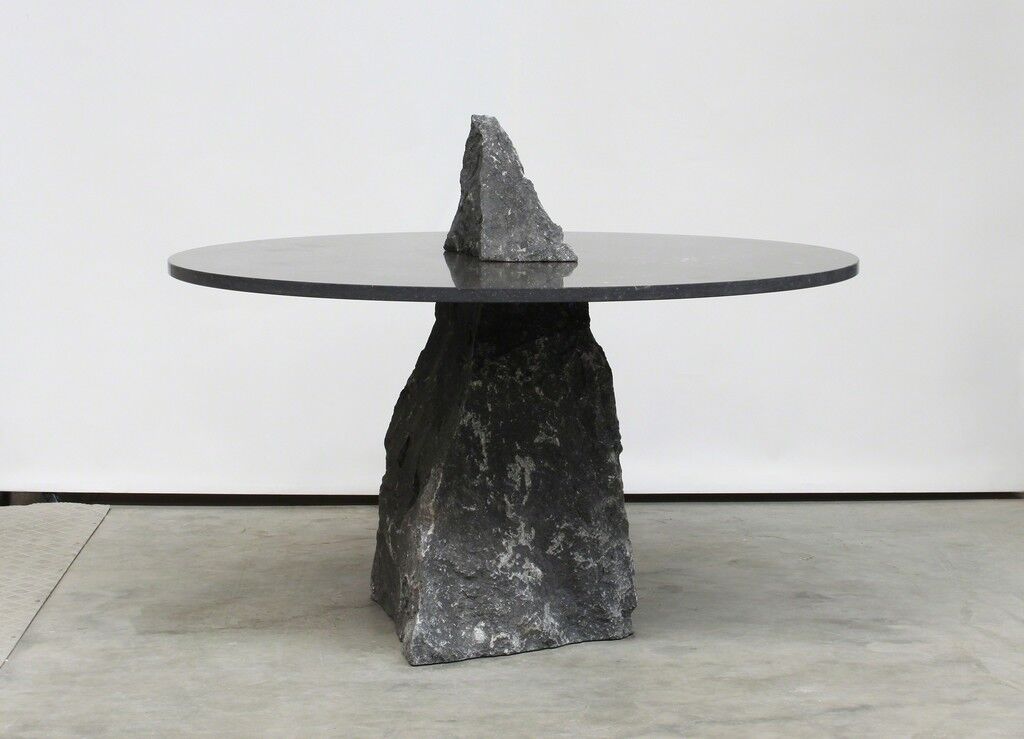 Lex Pott
Fragments Dining Table Round Mountain, 2015
The Future Perfect
For large stone pieces, the sheer scale of the material makes their design more a work of choreography than one of craft. “In a picture, the quarry looks big, but when you stand there you realize how immense and enormous it really is. When you see these rocks, you realize that you can’t lift them, not even with 10 guys. It almost doesn’t have a human scale anymore.” Pott’s voice takes on a tone of reverence when describing the production process. He tells me that the blade of the saw used to slice apart the stone for the table is six meters in diameter (almost 20 feet across). Ultimately, he sees the challenge of this project as one of communication. “As a designer, you’re sort of a strange outsider and you always have difficult ideas,” Pott says with a smile. “In the end it’s always a dialogue between what is possible, what their intentions are, and what my intentions are. Of course you have to meet in the middle to make it realistic.” 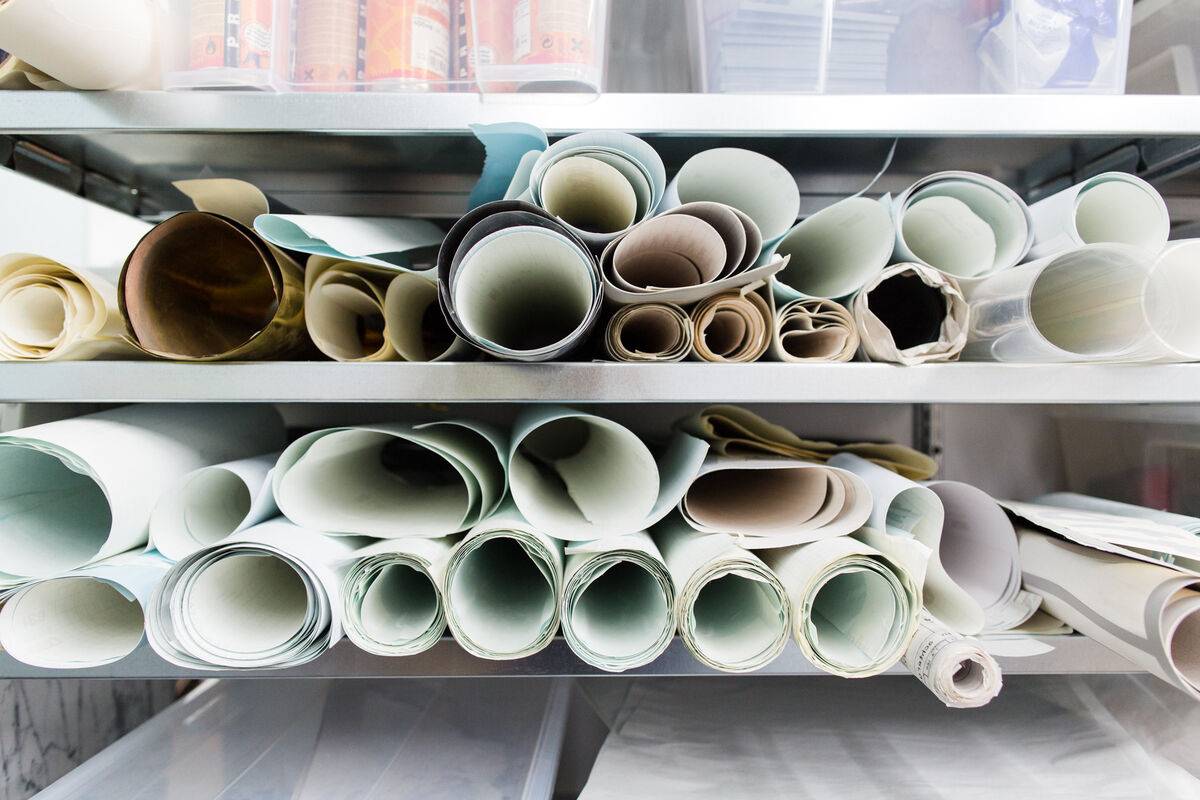 Pott sees himself as a researcher, preferring to dive deeply into a natural material such as wood, or a natural process such as oxidation, without a formal outcome in mind. For one project, his explorations into the relationship between material and color resulted in months of testing formulas, with the intention of creating a vase with an oxidized patina that was perfectly even, consistent, and reproducible. In one sense this was a total failure. “I found out that I couldn’t control the process because metal oxidizes by nature, so it was always irregular. I embraced that each vase is unique,” he reflects. “It’s good to embrace failure instead of pushing it away or trying to get it perfect. In the beginning I was fighting against it, to make it as perfect as I could, but at a certain point I realized that it’s better to surrender, in a symbolic way of course.” (Ironically, when Pott’s oxidized vases went into mass production, quality control at the factory initially rejected them all, on the grounds that they were not identical and therefore flawed. The Danish production company had to intervene and explain that the irregularity was intentional.) 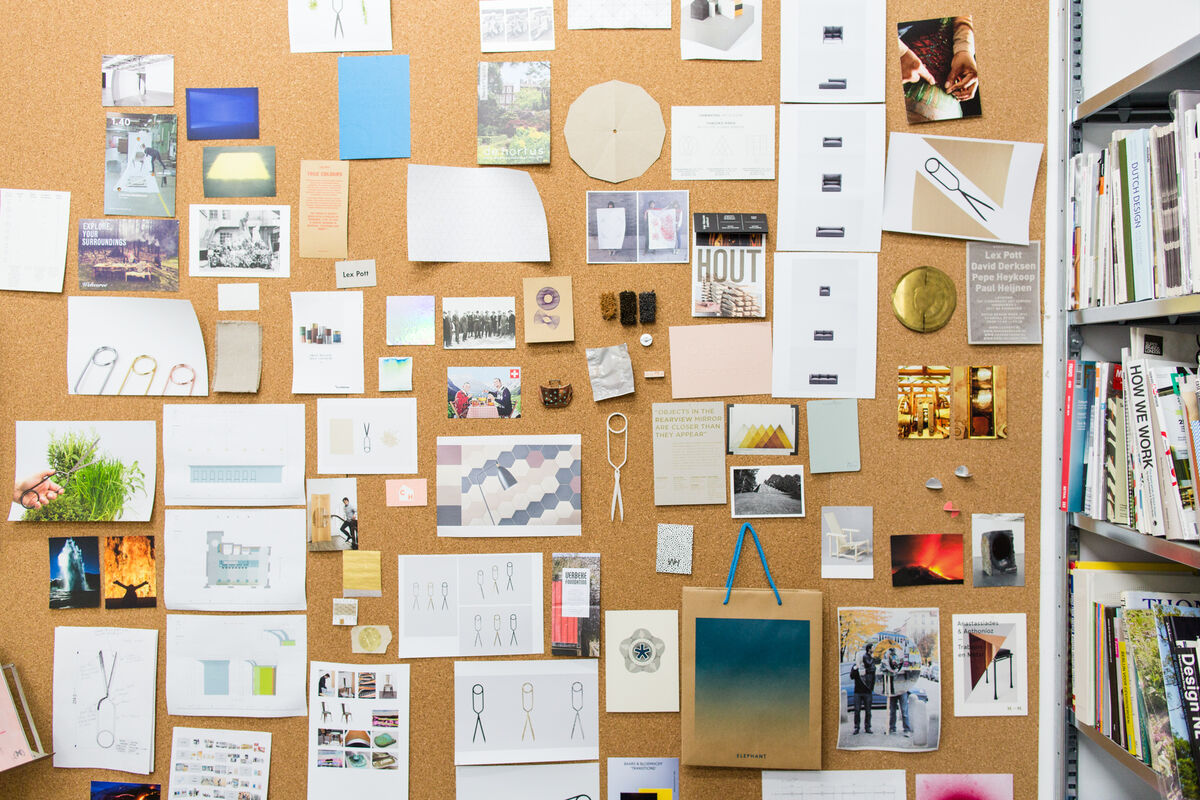 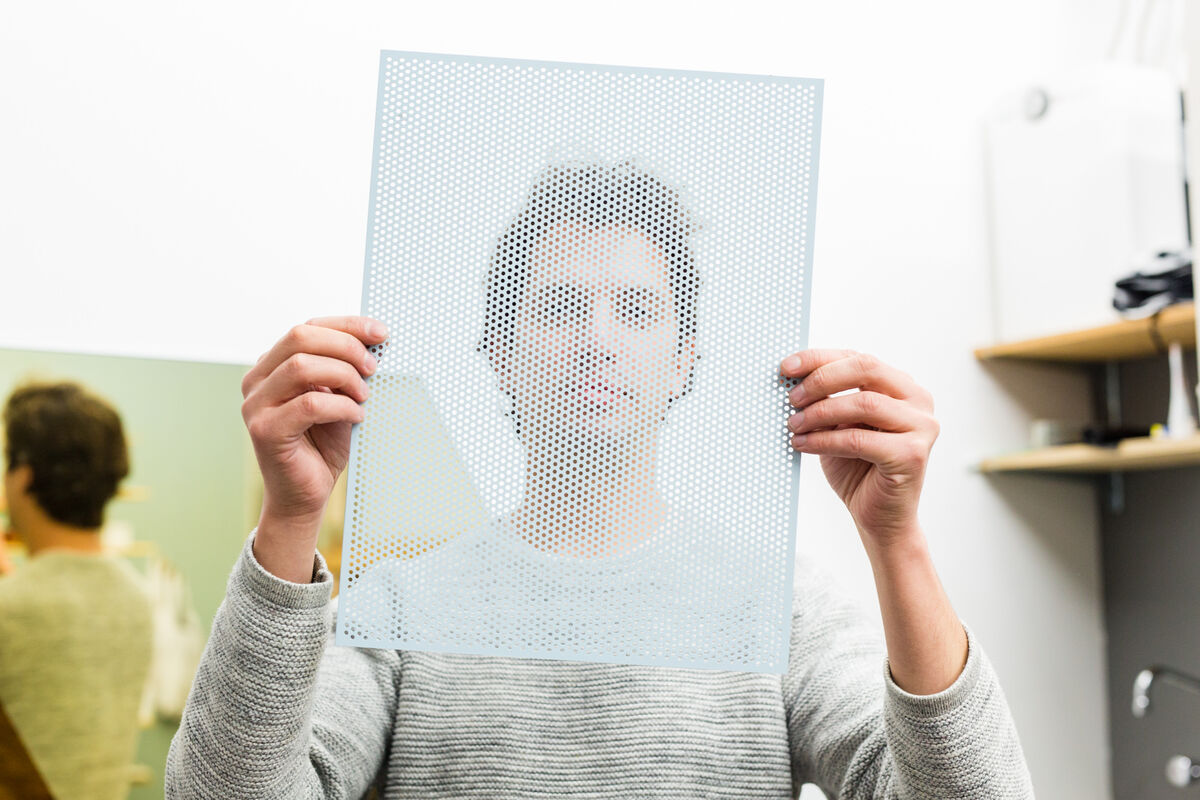 Lex Pott in his Amsterdam studio. Photo by Jordi Huisman for Artsy.

Pott’s dedication to exploring the fundamental qualities of natural materials has him eschewing design trends in favor of his own personal fascinations. He wants to resist what he sees as a design scene increasingly preoccupied with newness. “I don’t like where design is going now. Every year you have to launch something new, almost like a fashion collection: you need four a year, one every season.” Nevertheless, he is keeping busy with a thoughtful and diverse list of projects, from a monument for a Jewish cemetery to mass production of his designs with Danish and Dutch companies. Considering the fresh designs that sprang from his research on stone, wood, and glass, it’s exciting to imagine what’s next for the designer. For his part, Pott is open to new possibilities: “For the first time in my life I don’t want to focus on a functional outcome but more on an abstract or sculptural one.”
—Ariela Gittlen
Explore Design Miami/ 2015 on Artsy.
Related Stories