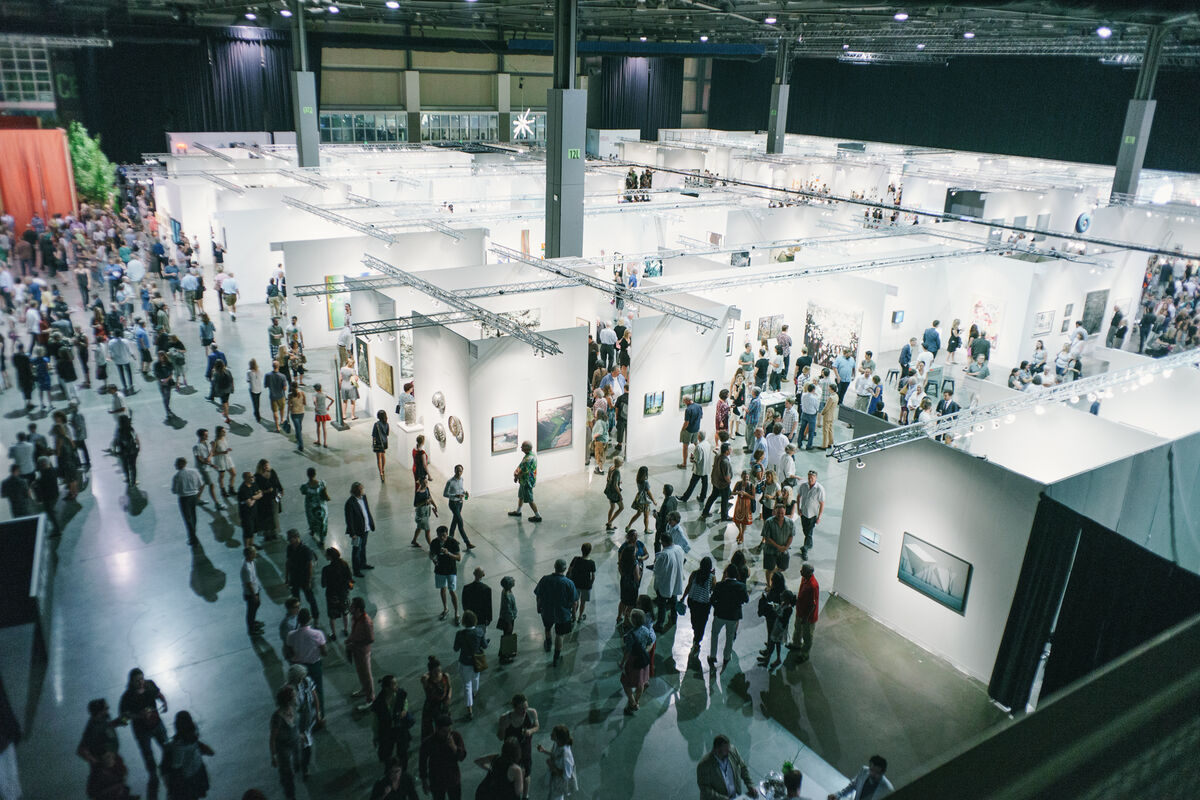 The opening night of the inaugural Seattle Art Fair was buoyantly cheerful and densely packed, with 62 galleries and a smattering of powerhouse collectors: Seattle’s Wrights and Hedreens, New York’s Beth Rudin DeWoody, and of course, fair founder and Microsoft co-founder Paul Allen, who hosted the event in a complex that also houses his own stadium (literally, the venue where his Seattle Sounders professional soccer team plays). The rest of the crowd was atypical of the art fair norm—fewer suits and ties than Teva sandals and khaki shorts, plus young children with their families. 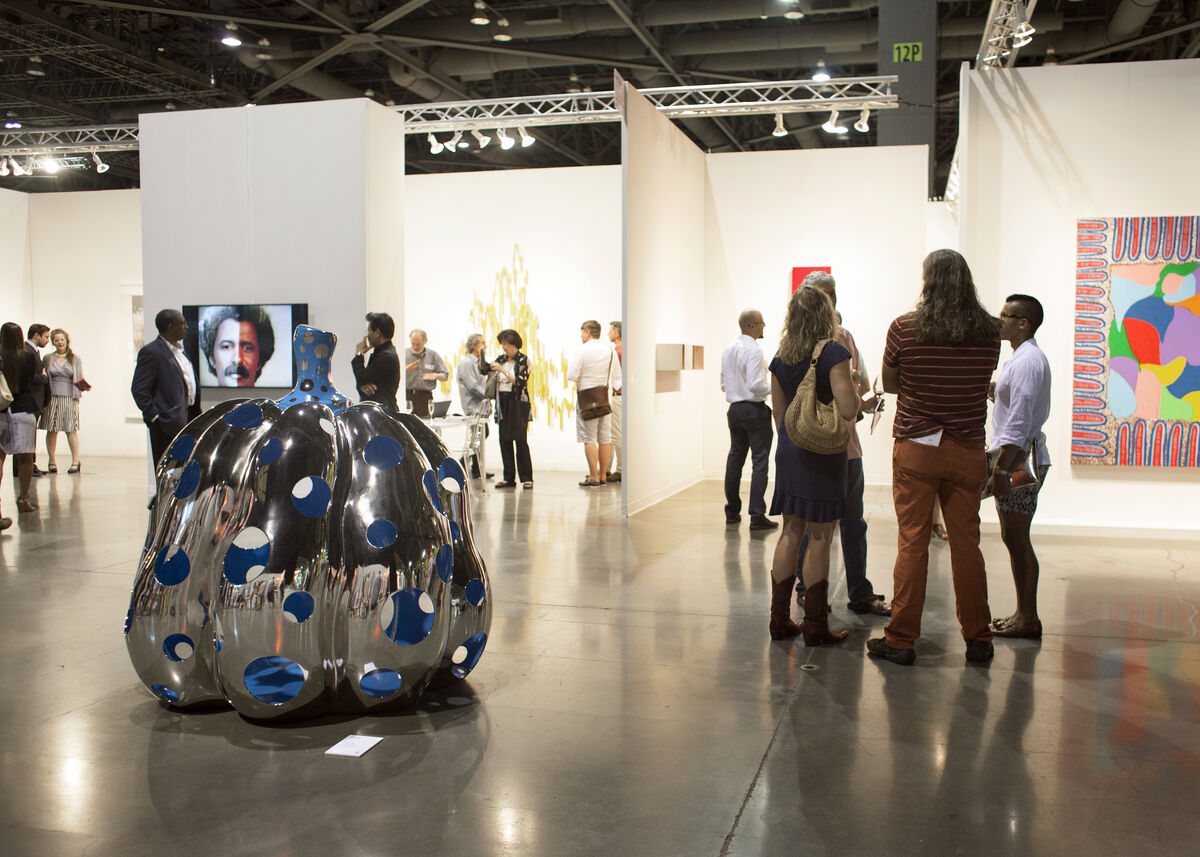 “Last night was one of those evenings that felt very social,” said David Zwirner director Robert Goff, who brought a spread of work by the gallery’s artists, including a new
Oscar Murillo
, a 1976
Dan Flavin
, a 1969
Alice Neel
, and a brand new stainless steel sculptural “Pumpkin” by
Yayoi Kusama
. The assemblage ranged in price from $8,000 to “just under” $2 million. “It was a good energy,” Goff told Artsy the morning after, although it didn’t bring a wholly “art-collecting crowd.”
“A lot of people might not know the artists we show even though they’re quite well known,” he continued. “There’s more of a public element of education here, where people are just coming to look at things.” (Steven Sacks, founder of bitforms gallery, however, put it more bluntly: “It’s pretty slow.”)
The energy Goff describes, even in tandem with a handful of blue-chip galleries—Zwirner, Gagosian, Pace, and Paul Kasmin—did not result in any record-breaking opening night. In Seattle, arguably the tech world’s second city, the wealth of Microsoft, Amazon, and Google employees abound, yet exactly how to translate that money into a thriving art market continues to mystify dealers. 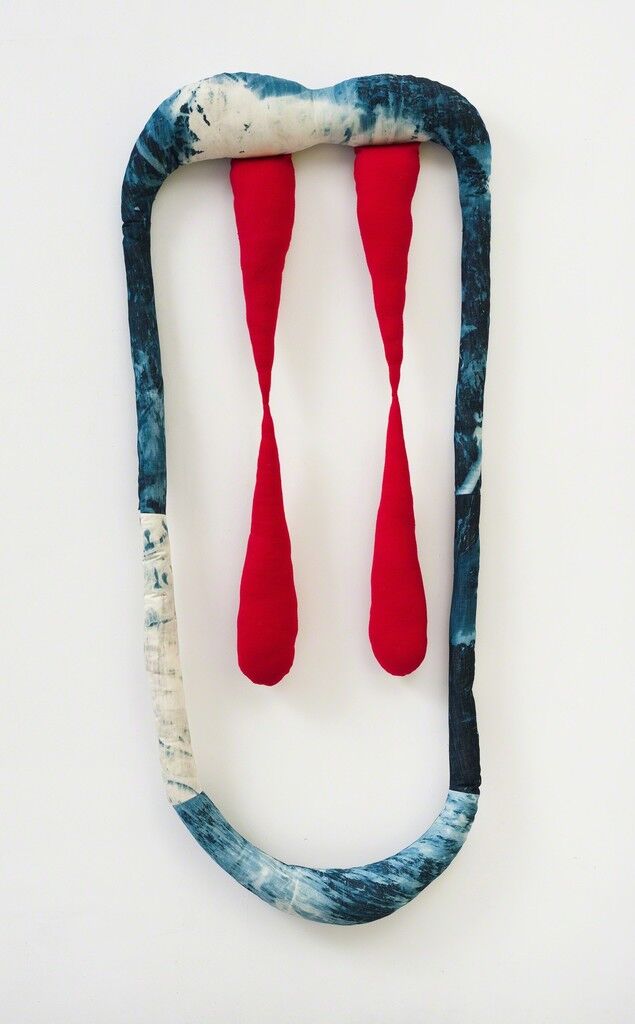 Sterling Ruby
VAMPIRE 106, 2013
Gagosian Gallery
Advertisement
“People are excited, and they say thank you for coming, but I am answering questions that are unusual for the first day of an art fair,” said L.A. gallerist Harmony Murphy, including: “What does a gallery do?”; if one of her pieces,
G.T. Pellizzi
’s 2014 steel-pipe and ceramic-basin Before Completion - Template (Figure 1), was in fact a sculpture; and whether someone could wash one’s hands in it. “I’ve met a lot of local artists and people from the neighborhood, who, based on the kinds of fairs that happen in New York, usually come on the last day of the fair.” 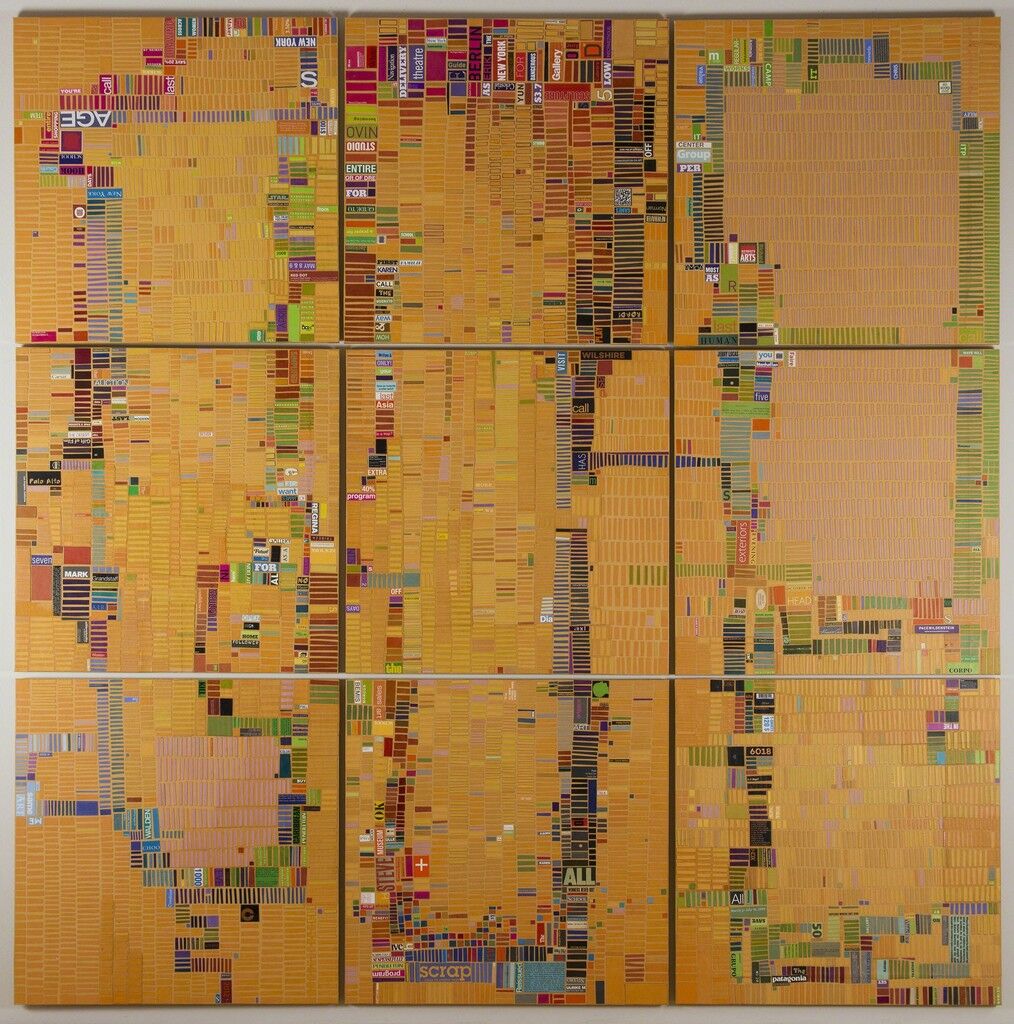 Laurie Frick
Austin, Week 47, 2014
Edward Cella Art and Architecture
Many dealers came with the hypothesis that throwing a few pieces that incorporated a tech component into the mix would attract the ever-elusive tech-world art collector. Edward Cella of Los Angeles brought two pieces by
Laurie Frick
, who transforms GPS data into paper collages and wall-mounted aluminum cut-outs. A 3-D printer stood on each end of fellow L.A. gallery 101/exhibit’s booth, extruding away to draw attention to
Micah Ganske
’s Ocular EVA Pod (2015), a 3D printed spaceship console complete with a set of Oculus Rift virtual reality goggles, priced together at $35,000. 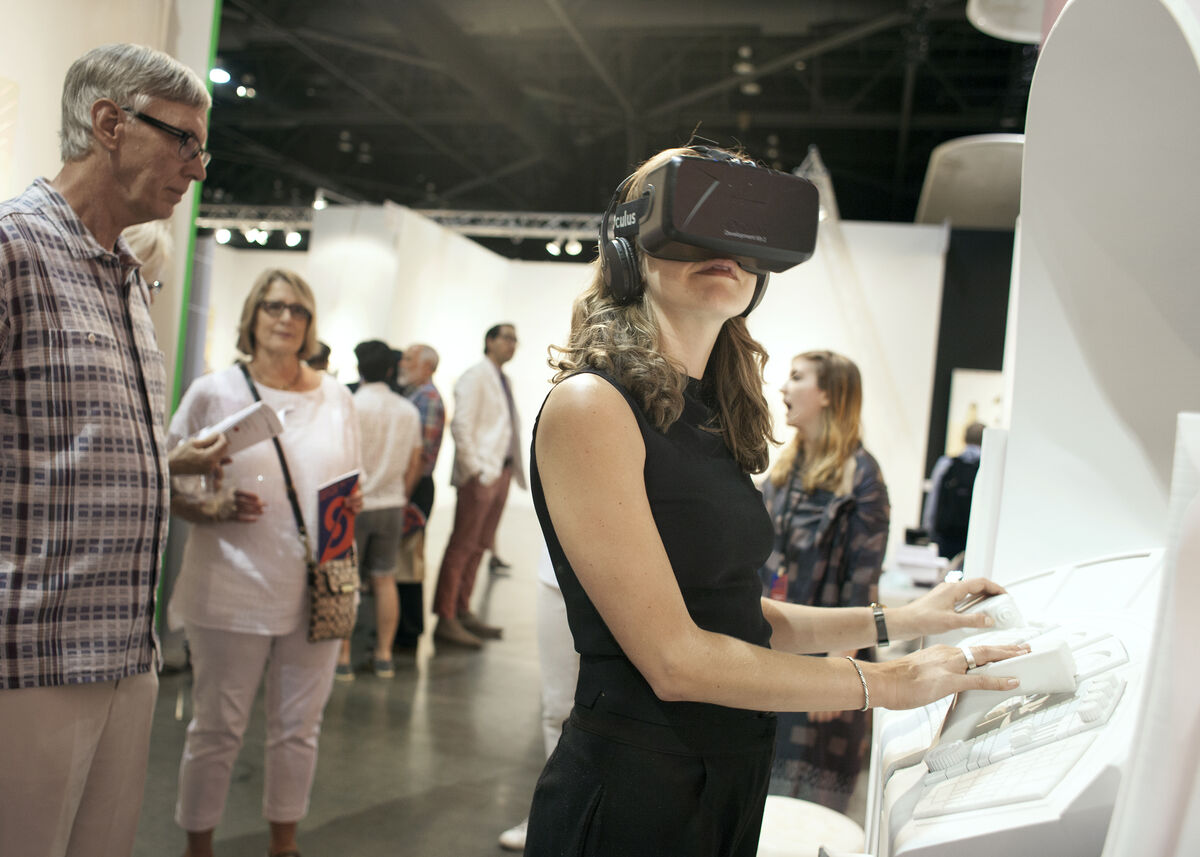 Everywhere, there were screens. In addition to “Thinking Currents,” an exhibition of video art focusing on subjects related to the Pacific Rim, beautifully curated by Leeza Ahmady, there were digital portraits that would continuously shift in posture by Susie J. Lee at Portland’s PDX Contemporary. For Hong Kong’s Osage, the piece that garnered the most visitor attention in their booth was
Maurice Benayoun
’s Emotion Winds (2014), an animated illustration of both the world’s wind patterns and levels of happiness on a digital map. Pace, alongside works by
Sol LeWitt
and
Tara Donovan
, brought three pieces by
teamLab
, a Japanese collective of programmers and engineers. Their Zen-inducing images of flowers and waterfalls drifting across panels of digital screens “generated a lot of interest,” according to Pace director Elizabeth Sullivan.
Yet for the most part, these conceptual pieces did not seem to resonate with fairgoers as items for purchase. “It doesn’t feel like I’ve hit a stride yet in terms of reaching a deeper base,” Sacks, whose bitforms gallery focuses entirely on new media, told Artsy, although by day one he had moved a few works by artist Addie Wagenknecht. She was present at the fair to perform inside the gallery’s auxiliary plexiglass enclosure, employing drones to spread colored pigments over canvases and create new editions of her “Black Hawk Paint” series, one of which sold for $8,000.
Faring better was the more traditional media of Greg Kucera Gallery, which sold two works by Seattle artists—Margie Livingston’s Tacky Grid (2015) for $10,000 and Sherry Markovitz’s beaded 2014 Poodle Head for $28,000, in addition to a 2012 William Kentridge print, Self-Portrait as a Coffee Pot for $9,800. Native American specialist Donald Ellis sold the frontlet of a Haisla chief’s headdress dating 1840-1860 to the forthcoming Audain Art Museum of Whistler, Canada, for $250,000. And neon seemed to be a hit. On opening night, Paul Kasmin sold Iván Navarro’s Revolution #2 (2015), glowing words encased in a set of drums, for $100,000, and Nancy Hoffman sold a Michele Pred piece for $1,200. 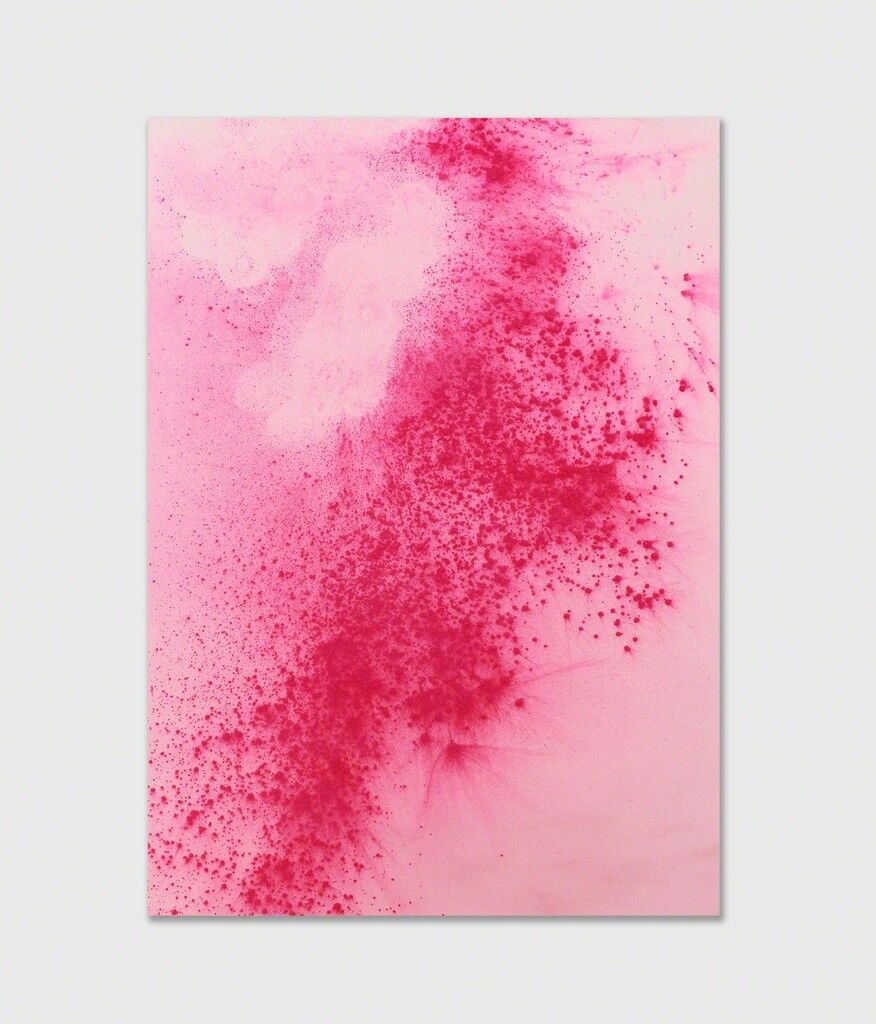 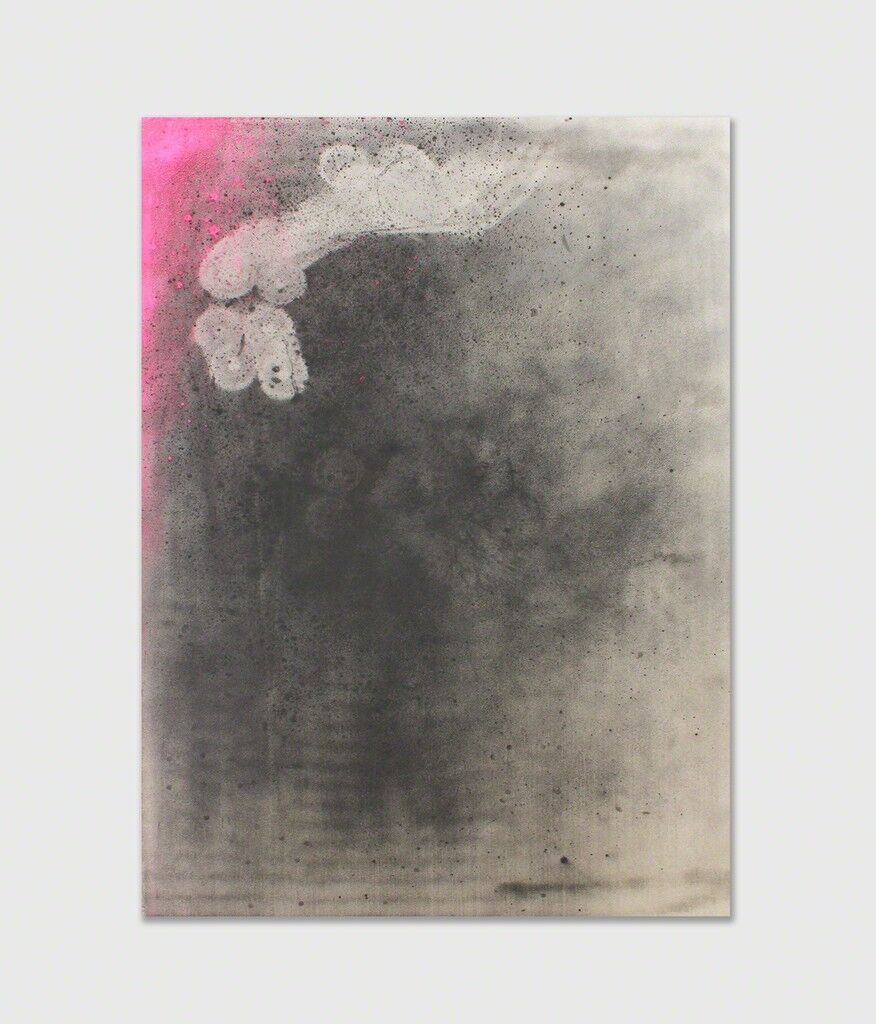 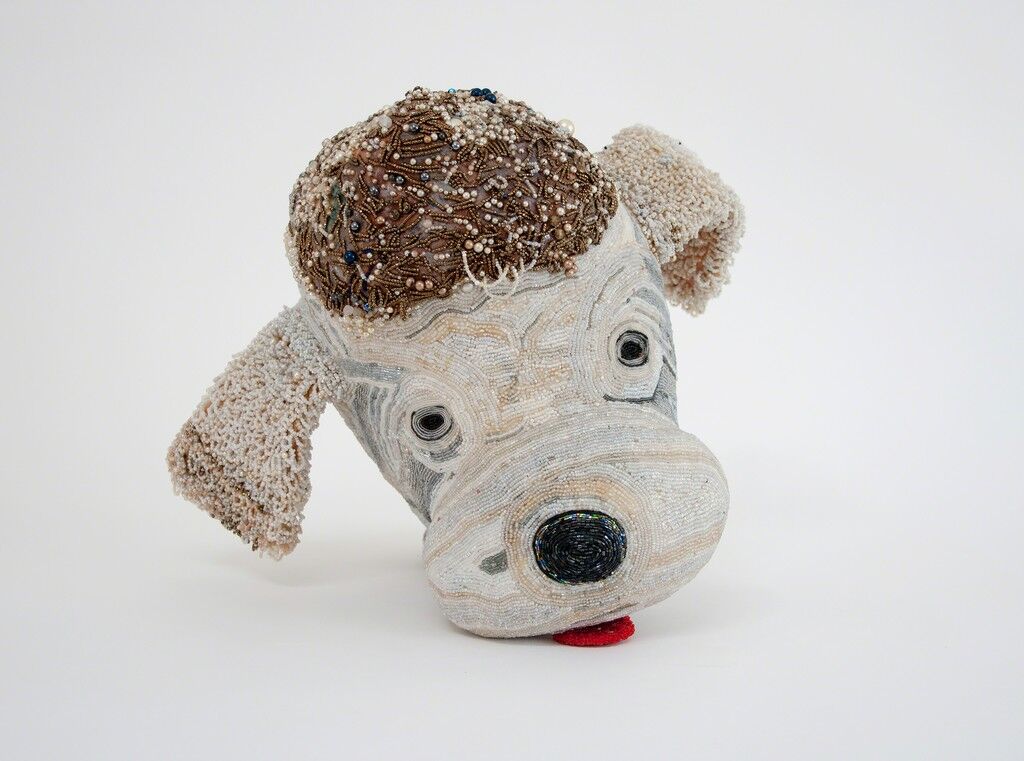 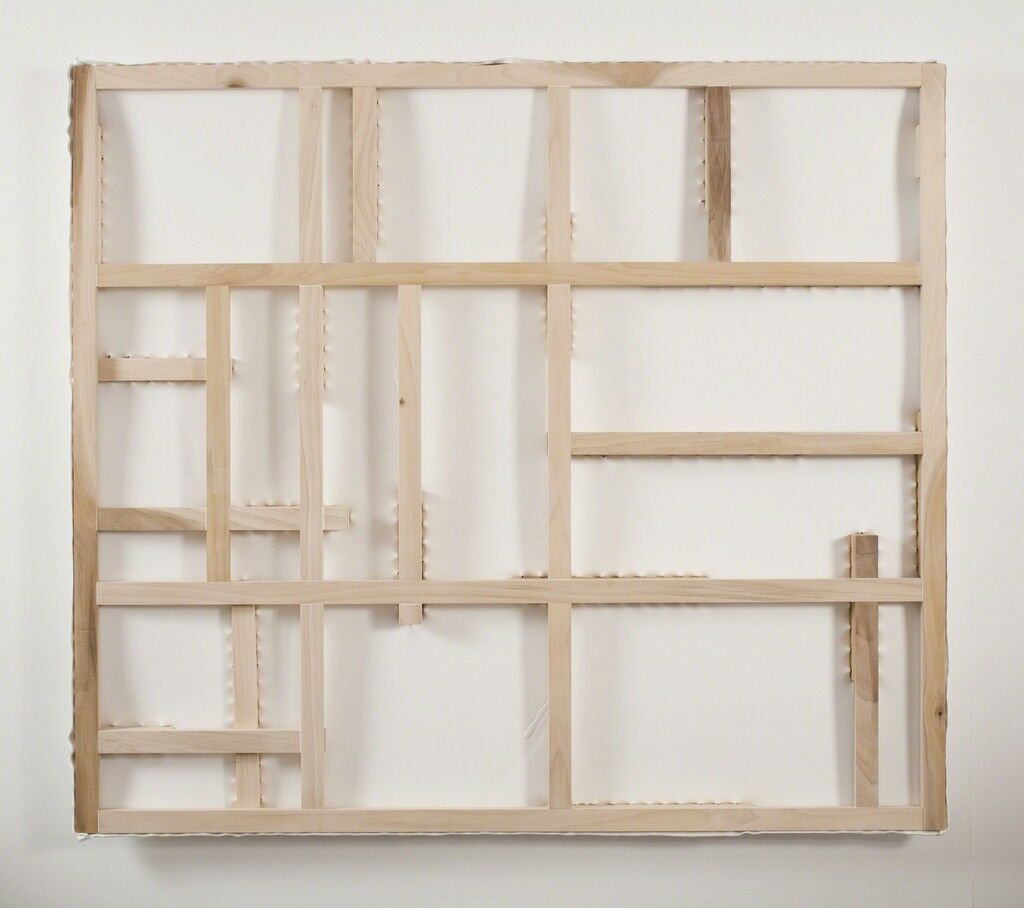 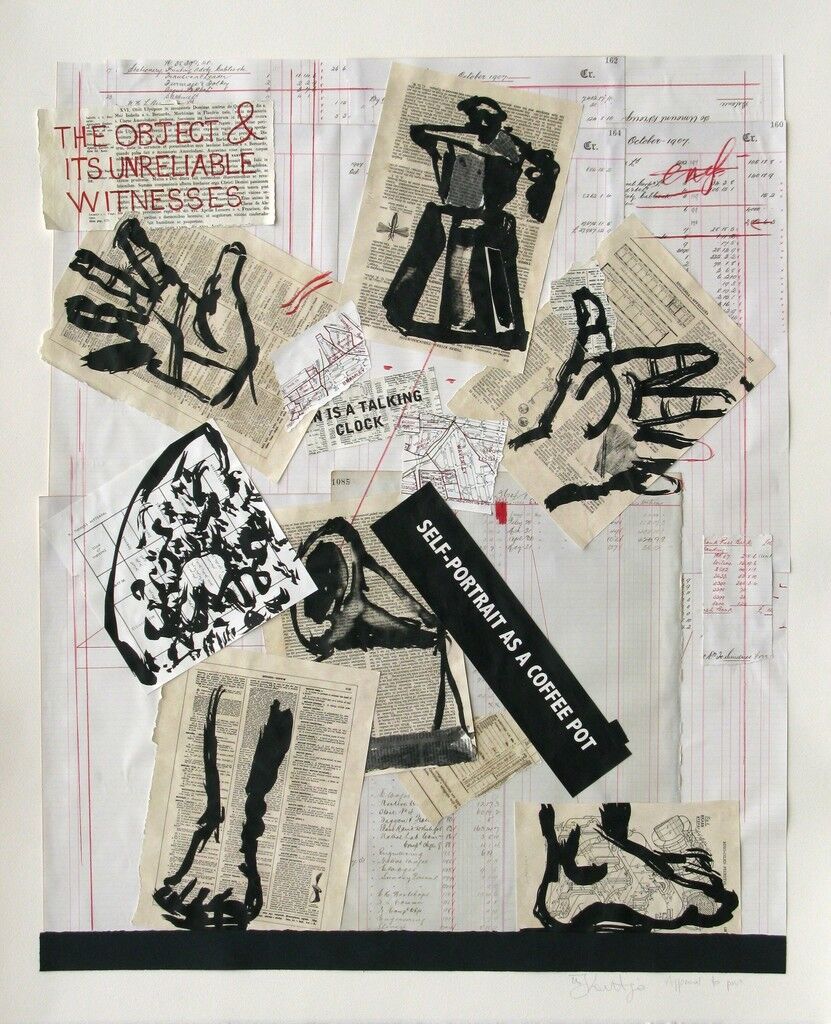 William Kentridge
SELF-PORTRAIT AS A COFFEE POT, 2012
Greg Kucera Gallery
Despite wan sales in the fair's first hours the gallerists continued to be uncannily cheerful. Perhaps it was the low stakes, with exhibitors’ fees here much smaller in comparison to other, more established fairs. Or perhaps it was the enthusiasm of the audience, which is exactly what founder Paul Allen had wanted. His mission statement included nothing of making sales. “I’ve always had a passion for art, and believe it should be accessible to everyone,” he told Artsy. “It is my hope that the fair will continue to ignite a passion for art and culture in our community.”
But is passion enough to bring the dealers back next year? “Too early to comment,” Paul Kasmin director Eric Gleason told us. Like a Magic 8 Ball, he advised that we ask again later. (Gleason subsequently contacted Artsy to confirm that the gallery would, indeed, be participating in the fair's next addition.)
Janelle Zara
Explore Seattle Art Fair 2015 on Artsy.
Related Stories