At the Guggenheim, a March Through On Kawara’s Take on Time 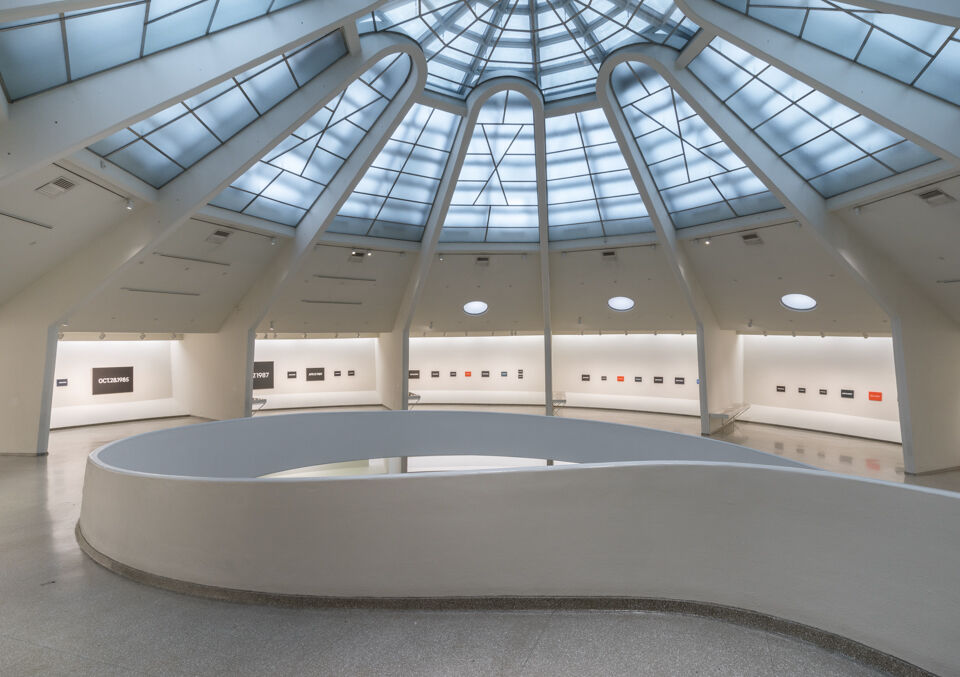 Installation view of "On Kawara – Silence," courtesy of the Guggenheim Museum

How does one enter the immense body of repetitious work left by the late
On Kawara
? One might approach it as an effort to document existence: through five solid decades the Japanese artist marked the elemental components of his days on earth—the dates, the locations, the paths he traveled, the times of day he awoke, the sheer fact of his life’s continuation for one more day. “On Kawara – Silence,” the artist’s current retrospective at the Guggenheim, presents Kawara’s work as just this: a record of time, place, and habit as the systems that govern our daily lives. The museum’s unique layout amplifies Kawara’s output, generating significance through the sheer mass of material presented. It’s a befitting pairing, the Guggenheim providing, in a sense, the proper place to view this work, and Kawara’s oeuvre in turn embodying what seems like the proper work to fill this space. 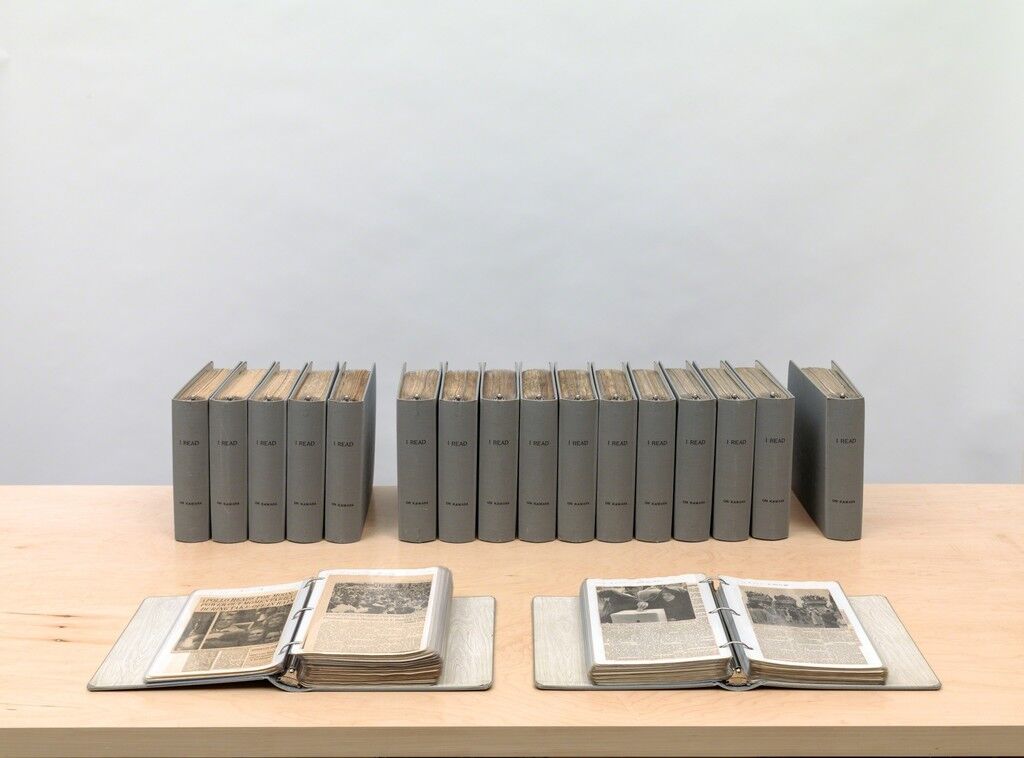 On Kawara
Title, 1965
"On Kawara - Silence" at Guggenheim Museum, New York (2015)
Upon entry, the Guggenheim’s High Gallery offers a prelude of sorts to Kawara’s best-known works in Title (1965), a triptych of early riffs on the date paintings that show more conceptual freedom than his later series. “ONE THING,” reads the left panel; “VIET-NAM,” the right; “1965,” answers the larger centerpiece, which serves as a gravity point for the two wings. With this grouping Kawara makes a striking moral pronouncement that surpasses much of the work for which he is best known, evoking his own perspective on the world more strongly than in the systematic “Date Paintings” (1966-2013) that are the focus of the Guggenheim’s presentation.
As one rounds the ramp that displays paintings made on 97 consecutive dates in 1970—this retrospective marking their return to this building, after their debut at the 1971 Guggenheim International Exhibition—one can’t but wonder: What did Kawara actually achieve through this vigilant record-keeping? What is the substance of these repeated letters and numbers in identical frames? The visual impression they give is initially dominated by their referential power, as the dates are all that differentiate one work from another, but the Guggenheim’s arrangement highlights the elements of these works that prohibit their true uniformity—the letters and numbers become shapes that point nowhere, symbols divorced from their reference points. Presented in such volume, these works become a system in themselves, one that points to the schema with which we measure our lives without ever quite overcoming its grasp. 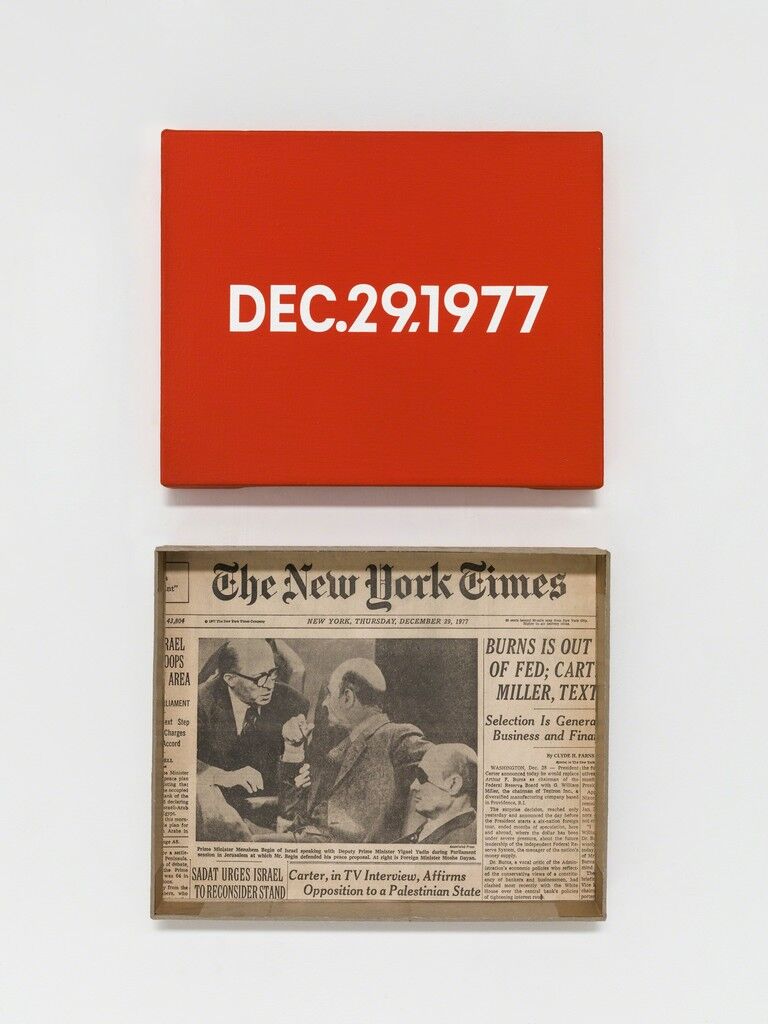 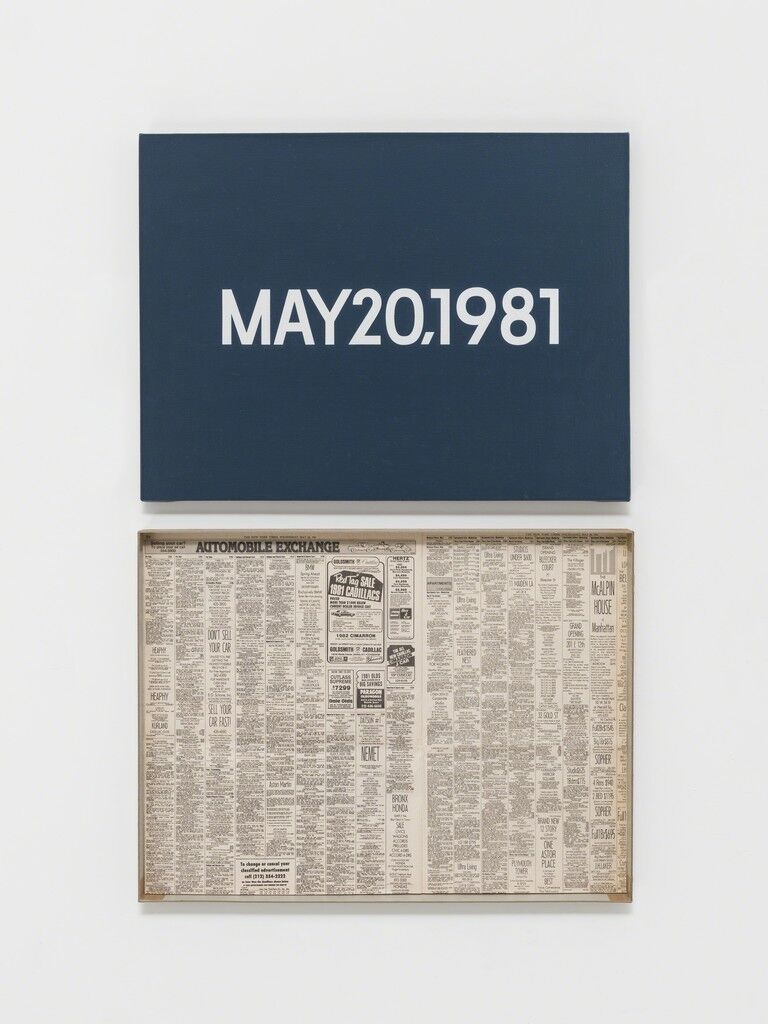 On Kawara
MAY 20, 1981 "Wednesday", 1966–2013
"On Kawara - Silence" at Guggenheim Museum, New York (2015)
Advertisement
The date paintings are accompanied by boxes that Kawara housed them in, each one lined with a newspaper clipping from the day it was created. These framed clippings are more evocative and particular mementos of Kawara’s days, taken as single entities. To the modern eye, the headlines they bear are hauntingly familiar. “ISRAELI JETS FIGHT EGYPTIAN PLANES OVER SUEZ CANAL,” shouts the New York Times clip that lines the box for Jan. 5, 1970; for Feb. 11, 1970, “TEXT OF THE PRESIDENT’S MESSAGE TO CONGRESS PROPOSING ACTION AGAINST POLLUTION.” A clip from February 22nd reports the crash of an Israel-bound plane after a bomb exploded aboard, killing all passengers; two days later, an ad reads, “Some people think our noon Royal Hawaiian flight is our most beautiful nonstop to Los Angeles.” It’s here, in the curated collection of paraphernalia from the days he documented, that one can trace Kawara’s thinking as he crafted these works.
Kawara’s persistence is staggering. Lined up in consecutive order, the paintings lure viewers up the Guggenheim’s spiral, inviting them to march on, through the onslaught of documentation. In the moments of its most intense repetition, this documentation turns desperate. In the alcove that inaugurates the presentation of Kawara’s near-daily telegrams to a host of friends, most bearing the simple message “I AM STILL ALIVE,” three framed telegrams are set apart from the others. Taken together, their texts create an ambiguous but frantic narrative: “I AM NOT GOING TO COMMIT SUICIDE DONT WORRY”; “I AM NOT GOING TO COMMIT SUICIDE WORRY”; “I AM GOING TO SLEEP FORGET IT.” 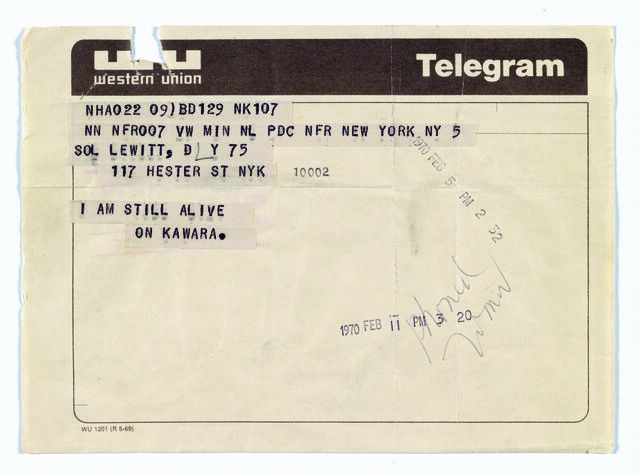 On Kawara
Telegram to Sol LeWitt, February 5-1970
"On Kawara - Silence" at Guggenheim Museum, New York (2015)
For an artist that famously kept out of reach of interviews and press appearances, these fleeting details provide the only entry points into Kawara’s life, in a body of work that is divorced from the personal. It is these small moments, along with the ritualized practice that led to their creation, that indicate something of the artist’s presence in the works. An image from one of Kawara’s journals of a handful of date paintings made in mid-October 1966, stacked against the wall in what is likely his studio, perhaps reveals more about the mundane tendency of his work than the Guggenheim’s triumphant display lets slip by.
Of the piles of paintings he amassed, numbering in the thousands and representing his days on earth, none point toward the contents of those days—what Kawara thought, heard, saw, wanted, needed, lost, gained, wished for. He was in these places at these times; so were others. What he memorializes is the universal: the dates, the addresses, the news headlines. It’s clear that Kawara paid special attention to the passing of his life, but that attention is somehow dissolved in the works he left behind. They become a memorial to the system rather than a successful attempt to break its hold. 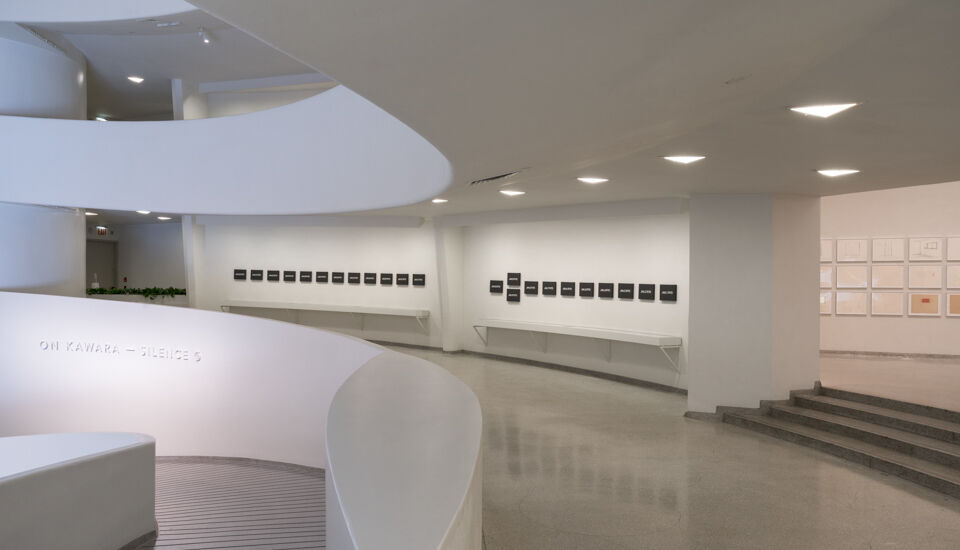 Installation view of "On Kawara – Silence," courtesy of the Guggenheim Museum

While the Guggenheim’s presentation allows the works to claim an existence of their own, it doesn’t expose much about the artist himself. The museum tells us that Kawara, who helped initiate plans for the retrospective before his death last summer, chose the spiral symbol that follows the word “Silence” in the exhibition’s title. This representation, both of the Frank Lloyd Wright-conceived spiraling ramp of the museum and of time—the subject Kawara took up most thoughtfully in his work—may be one of the most outspoken actions of the artist to be found in the whole place.
The artist’s own silence provides a passive answer of sorts. What he managed to preserve, he may truly have kept for himself. The works he left behind, however, speak loudest through their volume, calling out the system that unites us and erasing what is essential to the individuals that live it.
—Halley Johnson
“On Kawara – Silence” is on view at the Guggenheim Museum, New York, Feb. 6–May 3, 2015.
Follow the Guggenheim Museum on Artsy.
Installation views of "On Kawara – Silence," courtesy of the Guggenheim Museum.
Related Stories