At the Jewish Museum, a Show of Rebels, Radicals, and Mavericks Takes Aim at Tradition 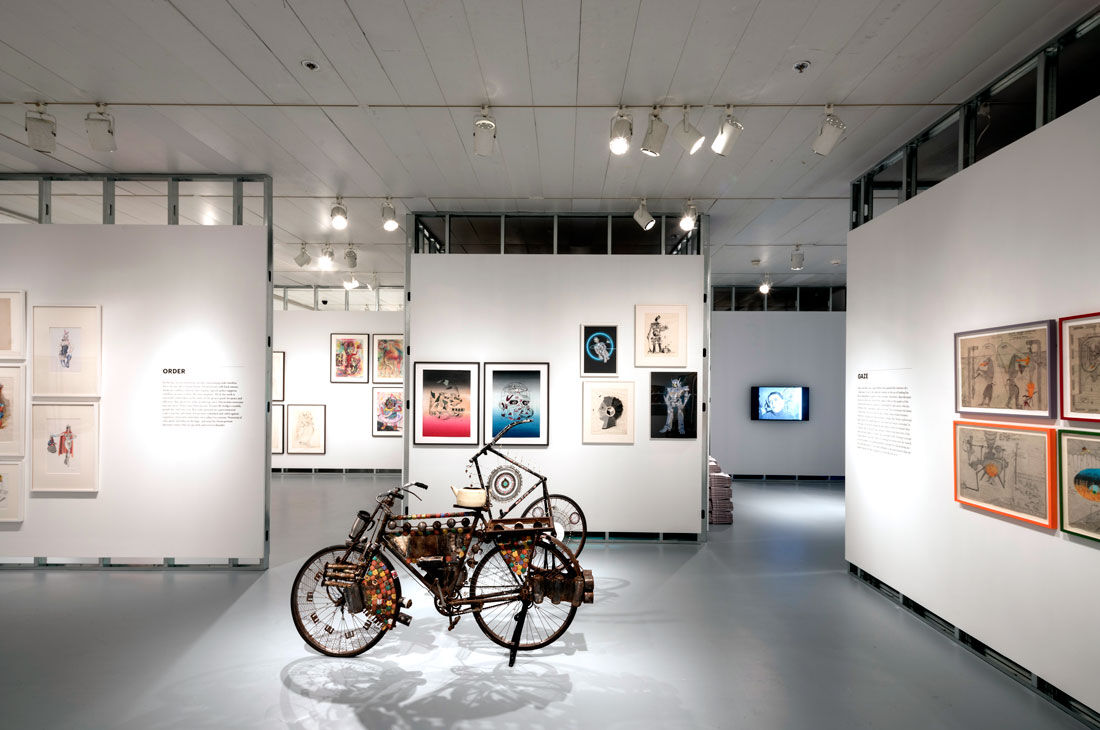 An exhibition titled “Unorthodox” sounds ambitious. An exhibition titled “Unorthodox” at the Jewish Museum sounds “provocative,” as curator Jens Hoffmann says in the accompanying catalogue—putting it mildly. So what kind of obscenely controversial works of religious art are on display at the Upper East Side mansion-cum-museum? Well, none really. Rather, Hoffmann, along with co-curators Kelly Taxter and Daniel S. Palmer, has put together a show of some 55 artists (rebels, radicals, mavericks, if one wants to get dramatic—just don’t call them “outsiders”), united by their challenge to mainstream orthodoxy of every stripe. It’s worth noting that in the mix, too, are a handful of trendy emerging artists, Zoe Paul, Brian Bellot, and Nick Payne among them. The Jewish connection here isn’t a directly religious one; rather the works exemplify the Jewish tradition of dialogue and critique of prevailing thought. With this foundation, “Unorthodox” juxtaposes artists from different decades, countries, and creeds, and like all truly great dialogues, it does so in ways that are profoundly generative.

Attacking a veritable smorgasbord of orthodoxies (artistic, political, temporal, etc.), the show revels in work that “can’t be easily categorized or described, but should be celebrated for its diversity and variety,” writes Palmer. The works (and wall texts) touch on themes like “iconoclasm,” “gaze,” and “lies,” but the visual rhythm of “Unorthodox” provides cohesion. One example: the materiality of
Jeffry Mitchell
’s expressionist, melting earthenware hands clutching upwards are nicely contrasted with
Jiří Kovanda
’s hanging raincoats, filled by what appear to be drooping plastic arms.
In another instance, the blobby ceramics of female figures by Alice Mackler, who had her first solo gallery exhibition at age 82, foreground Rhapsody (2015), a figurative painting of a mysterious, self-possessed women by 40 year-old German artist Birgit Megerle. “Why put these artists together?” I heard one visitor ask (thank you to this anonymous woman for providing such fantastic review fodder). Beyond overlapping concerns with how women are depicted, the pair challenge tired categories like “emerging” and “contemporary.” Mackler and Megerle weren’t raised on iPhones and Facebook, but they nonetheless produce work that is undeniably current.

Advertisement
Chronologies and other orthodox notions of progress are delightfully violated over and over. Both the militarized face of Xanti Schawinksy’s The Aviator (1942) and the shimmering robot of
Hajime Sorayama
’s Untitled (1990), for instance, despite being created 50 years apart, speak with stunning clarity to how, even as technology appears more human, it fundamentally lacks humanity. Geography is ruptured as well: one can get from Japan (
Masatoshi Naitō
’s photographs) to Hungary (Margit Anna’s paintings) in four steps or less. 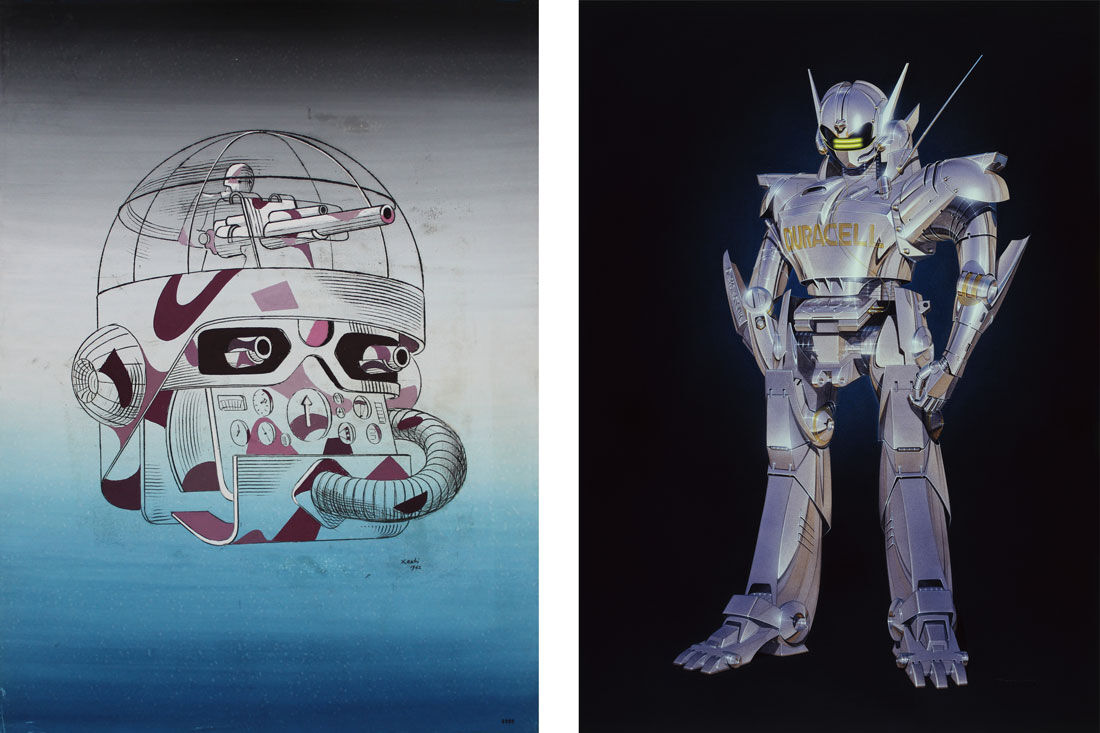 Without a knowledge of the canon, one might wonder why the show was titled “Unorthodox,” since, on a purely visual level, there is no obvious reason that a great many of these works aren’t considered great. Each artist has their own story, but one reason for their relative obscurity is the way art must traverse a very physical series of destinations on its way into the canon: gallery, art fair, biennale, museum (lather, rinse, repeat), and finally textbook. This path simply isn’t conducive to all worthy artists. Quasi-photorealist painter David Rosenak, who suffers from Parkinson’s disease, usually makes just two paintings per year, and chooses not to sell them because of the meticulous crafting they require.

“Unorthodox” posits that a site of resistance to these all-consuming systems can be found in the tangible humanity of the body. At its most haptic, this proposition is evinced in the show’s emphasis on hand-crafted works: in South African artist
Hylton Nel
’s molded ceramics, for instance, or Meriem Bennani’s stunning, brightly colored (though unsettling) animations of anthropomorphized canines dancing and having sex in PAMELA (2011)—an exploration of the repression women experience in her former home of Rabat. Bennani’s video plays in a centrally located cube, and its musical score of thumping beats and delicate pan flutes float through much of the show, animating the slender, contorted figure in Auste’s already fantastical painting A Mistaken Style of Life (1987) on the opposite wall. 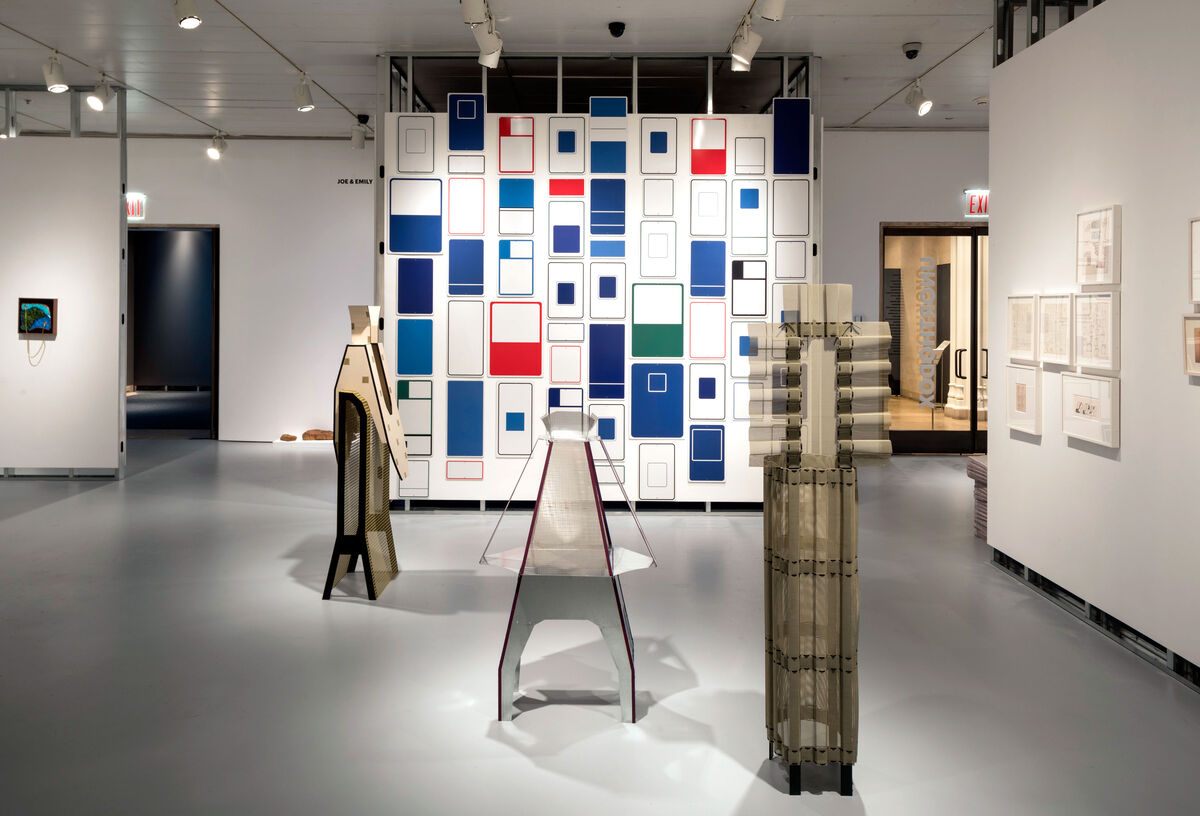 “Unorthodox” never lets you settle down in front of a work—every step results in a kaleidoscopic reshuffling. Looking at Cheap Art Collective member Max Schumann’s circular images of newscasters (signed with dollar amounts in lieu of a name), a slight tilt of your gaze lets
Park McArthur
’s wall of Private Signs (2014) into your vision, all while you feel the effervescent power of a sparkling canvass impaled by a piece of wood (
Michael Buthe
’s Untitled (Landshaft), 1987-88), off to the left. This is the central joy of “Unorthodox”: like dialogue, it can shift the world right before your eyes. 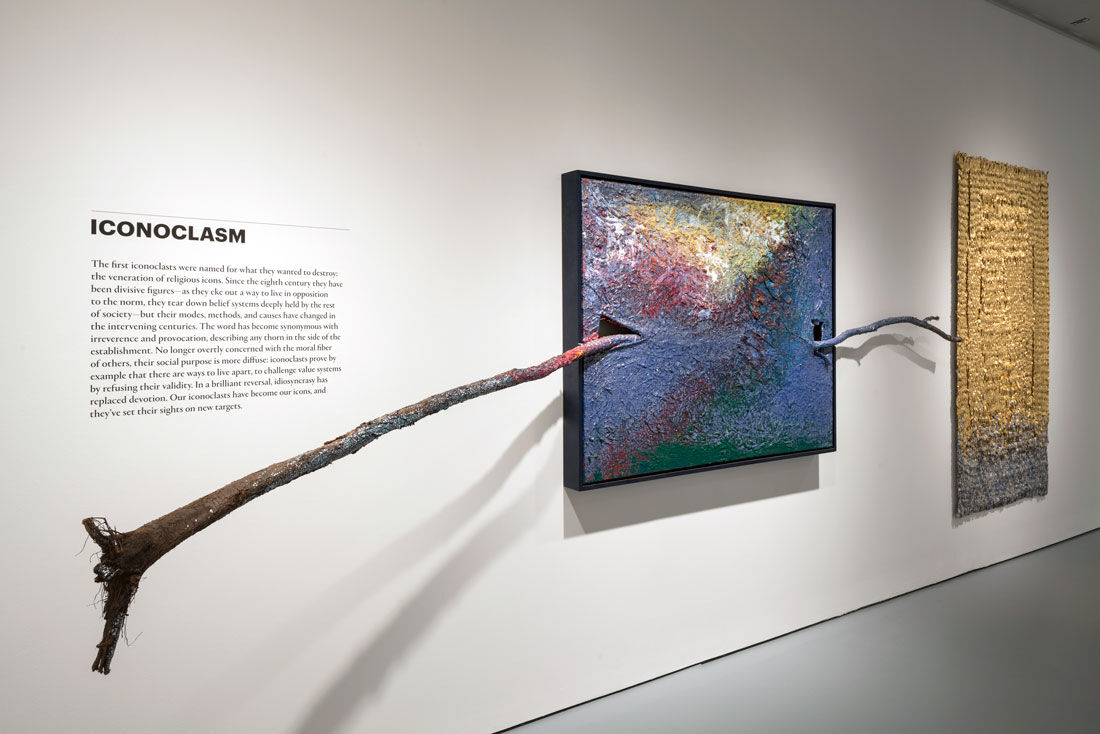 But there’s a theoretical conundrum here. As Hoffman accurately notes, “the history of the avant-garde is sadly also the history of how highly progressive artistic tendencies have been co-opted, one by one, by the establishment and arguably robbed of much of their radical potential.” So what effect does displaying iconoclasts in a literal mansion on Manhattan’s Upper East Side have? Can art-world institutions ever mount radical, self-critical shows without co-opting the work in some way?
We shouldn’t rush to answer, but, looking at history as Hoffman does, I lean towards answering in the negative. Still, it’s a genuinely difficult question, and one of degrees and nuance. The curators are mindful of this and, by way of a guide, the catalogue for “Unorthodox” includes a series of musings by, among others, RoseLee Goldberg, Hans Ulrich Obrist, and Defne Ayas about museums that are as heterodox as the works on display. Ultimately, it’s good the Jewish Museum didn’t opt for some of the radical exhibition techniques tossed around—a show entirely in the dark doesn’t stay fun for long. 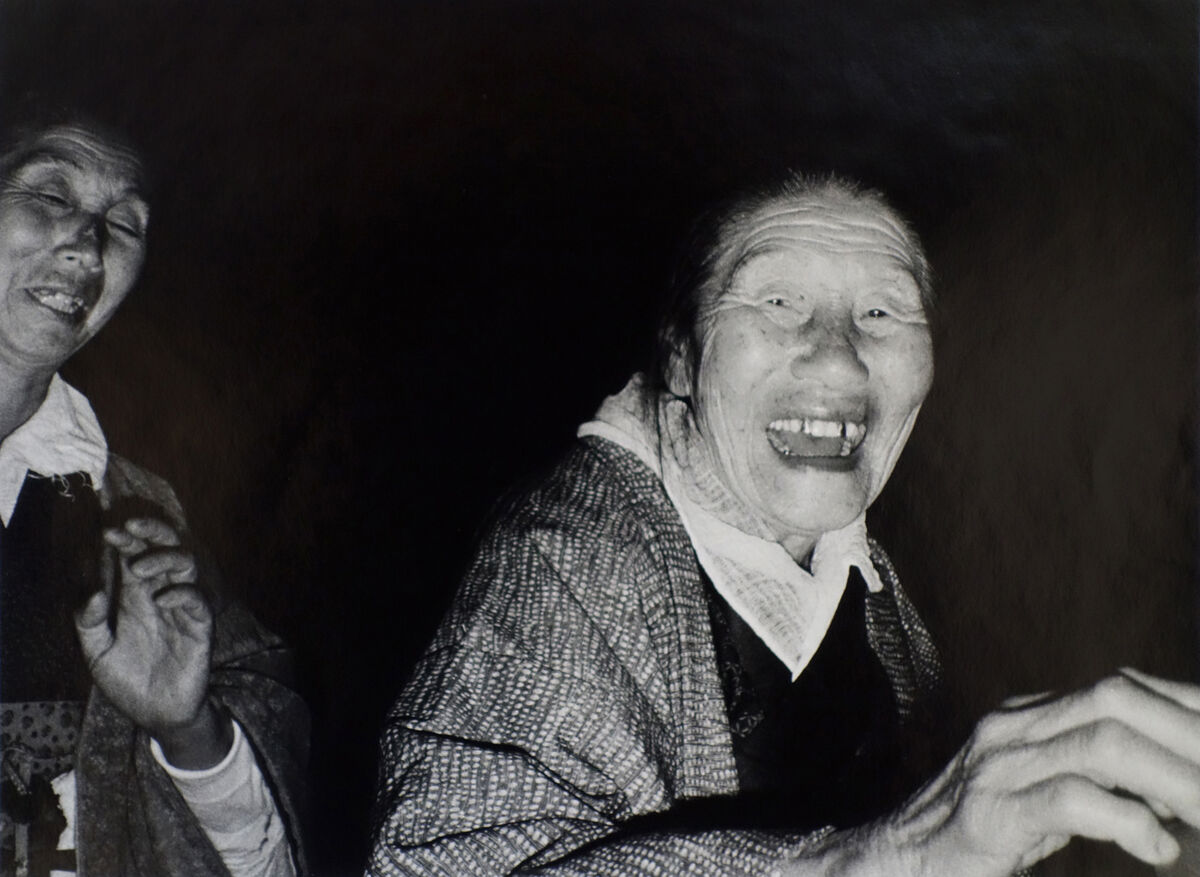 “Unorthodox” is too subtle and expansive to be a call to arms against the art world. Rather, it’s a sentence in a very long conversation about artistic resistance, and we’re invited to help utter the next words. Such discussions will continue thanks to a raft of programming and the potential for further exhibitions addressing the theme. By surfacing overlooked artists, creating generative juxtapositions between them, and unapologetically posing open questions, “Unorthodox” embraces challenging territory. What tangible effect the show may have remains to be seen, but, at the very least, the next blockbuster retrospective of a white male abstract expressionist will feel remarkably, perhaps painfully, orthodox.
—Isaac Kaplan
“Unorthodox” is on view at the Jewish Museum, New York, Nov. 6, 2015–Mar. 27, 2016.
Related Stories