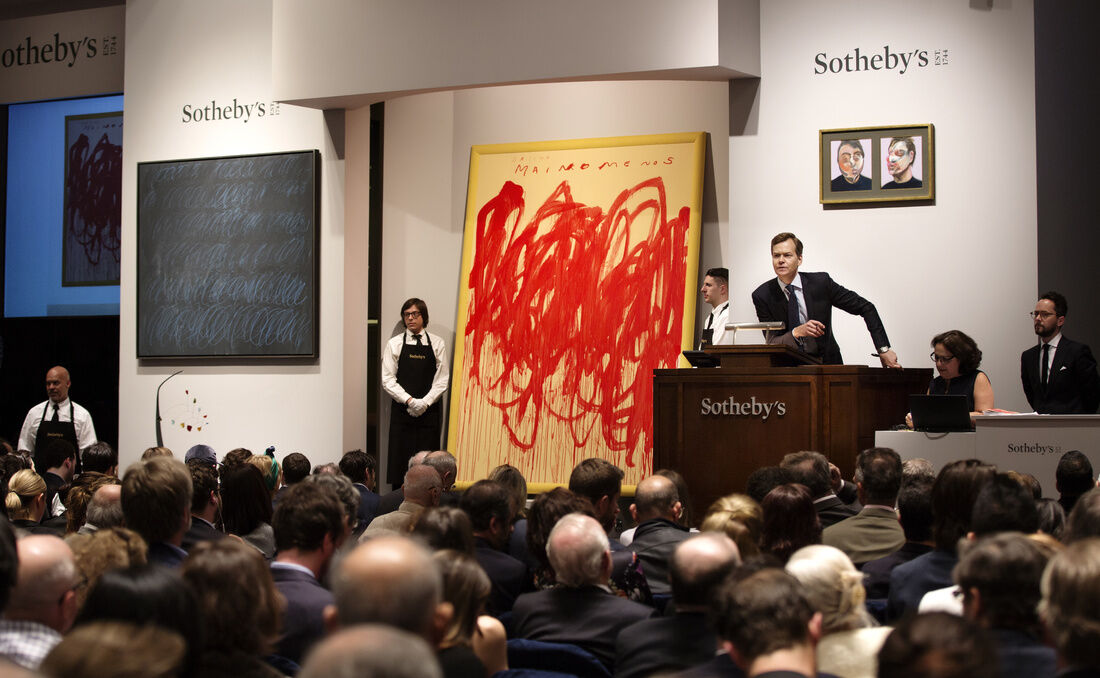 As a share of the population, the number of people who participate in fine art auctions is miniscule. To an outsider (that is to say, most human beings), the rituals of an auction—from paddle waving to forking over thousands for a work of art—are intimidating enough. And then there’s the language, a lexicon with its own nuances and auction-specific meanings. While we may not be able to get you a seat to the evening sales at Christie’s or Sotheby’s, we can help you understand what they’re talking about. Here’s a breakdown of a few terms to know and, more importantly, what they tell us about how the auction market operates, so you can understand what exactly is going on when an auctioneer bangs his or her gavel.

What does it mean?

A chandelier bid is a phantom bid, acknowledged by an auctioneer who often pretends to see someone raise a paddle in the back of the room, pushing up the price in an effort to stimulate interest in a lot.

Despite attempts to ban the practice, which auction houses prefer to call “consecutive bidding,” it is entirely legal so long as the bidding is below the minimum price for which a consignor would sell the work—a figure known as the “reserve.” Auction houses will disclose that such bids may occur through disclaimer text in the catalogue or an auctionneer’s announcement.
New York Assemblyperson Richard Brodsky made chandelier bidding and other art market regulation a personal passion, introducing several bills to outlaw phantom bidding over the course of his tenure in the legislature, which ended in 2010. Brodsky argued chandelier bids inflate prices by tricking buyers into thinking there is real market interest in a piece, and symbolize an overall lack of transparency in the art market. The bills faced opposition from auction houses and republican legislators, and they never became law.

They have two main reasons. The first is that the appearance of fervent bidding stimulated by such bids creates tension and drama in the auction room, potentially coaxing buyers to lose sight of reason and wave their paddles with abandon.
The other more important reason is that the fake bids hide the reserve price. Without chandelier bids, auction houses say they would have to start bidding at the reserve, thus making it public. Once collectors know what a consignor would settle for, they might be reluctant to bid above that price, thus hampering the market. For that reason, auction houses have warned that legislation to outlaw chandelier bids would push business from New York to places where the practice is legal, such as London.

What does it mean to “get burned”?

A work of art is burned when the price fails to meet the reserve at auction, therefore going unsold.

What else do I need to know about it?

Fair enough, but why?

For one thing, a consignor may have to fork over a seller’s fee to the auction house even if the work doesn’t sell.
And more importantly, general wisdom has it that once a work of art is burned, its value decreases, because there is now a public record of a lack of interest in a particular piece. Who wants to buy a piece of art no one else wants? If this mentality spreads beyond one piece and to an artist’s output, their entire market could crumble.

Does burning actually have a real impact on prices?

Most people in the art market will say yes. And some academic research has lent credence to the idea, though isolating burning as a sole variable for analysis is tricky. A 2008 study by Oxford University professors Alan Beggs and Kathryn Graddy looked at auction sales at Christie’s and Sotheby’s between 1980 and 1990. They found that works burned between sales ultimately returned 30% less than their un-scorched counterparts. They attribute that decline as potentially the result of several factors, including lowered reserve price and “common value effects,” a fancy term for when buyers consider the opinions of others when valuing a work.

What is a third-party guarantee?

A third-party guarantee occurs when an outside company or individual essentially places a bid for an undisclosed amount on a lot prior to auction, ensuring the consignor some minimum return on their work (also known as an “irrevocable bid”). Auction houses can also offer guarantees to the consignor, but the “third-party” designation implies an outside party.

What do they do?

Third-party guarantees help auction houses attract high quality lots by giving consignors a reason to part with their works, while helping the houses minimize risk. An auction house can guarantee a work entirely by itself, but then they’re on the hook if it fails to sell for more than the amount of the guarantee. By having all or part of the guarantee taken on by a third party, the house can offload the bulk of the financial risk by paying a fee to the guarantor, while using the promise of a guarantee to coax collectors to consign valuable works.

So the work is sold prior to auction?

In a way, yes. Of the estimated $2.1 billion in art for sale during New York’s 2015 auction weeks, roughly half by value had been guaranteed by either third parties or the auction houses themselves before paddles were even raised.
When the sale price exceeds the guarantee, the auction house will usually share some percentage of the difference with the guarantor, at a rate that varies according to the agreement.

That sounds fine…or maybe not?

There is an ongoing debate surrounding the impact of third-party guarantees on the market, part of a larger debate around price transparency. Third-party guarantors are kept secret and nothing prevents them from bidding on the work they’ve guaranteed, and thus have a financial interest in. The major houses typically indicate in the auction’s catalogue or through a verbal announcement which works have a guarantee and whether the third-party guarantor is bidding on a lot. Still, the warning does not indicate the identity of the guarantor nor the value of the guarantee. Theoretically, she or he might push the price up above the level that’s been guaranteed, then let someone else take the work home with a winning bid, and pocket a percentage of the difference per their arrangement with the auction house.
Or the guarantor might end up in a bidding war for a work they want to take home themselves. When
Edvard Munch
’s Girls on the Bridge (1902) hit Sotheby’s last year, it sold for $54.5 million ($4.5 above the estimate) to the third-party guarantor—who, along with placing the winning bid, was paid $2 million for their guarantee of the lot.

What is a buyer’s premium?

The buyer’s premium is the fee an auction house charges to the buyer on top of the hammer price.

How are they structured?

Auction houses determine the premiums depending on where the work is sold and the category (i.e. wine vs. fine art). In the major auction locations, the percent on the hammer price is progressively applied by value, with three tiers. So currently, a work sold at Sotheby’s New York for less than and including $250,000 incurs a buyer’s premium of 25%, while 20% will be charged on the money paid between $250,001 and $3,000,000 and then 12.5% on value in excess of $3 million.
Both Christie’s and Sotheby’s increased their buyer’s premiums for art in the fall of 2016. Sotheby’s is currently slightly more expensive than its competitor, charging buyers 25% for the first $250,000 on a sale, then progressively lower rates at each subsequent tier, with a 12.5% premium anything $3 million and up. Christie’s New York takes 25% on the first $150,000 of a transaction and goes down to 12% above the $3 million mark.

Well, that depends how they’re used. Some percentage of the premium can end up going to a third-party guarantor as part of their arrangement with the auction house. And competition for choice lots between the major auction houses, especially in a time of market uncertainty that has seen deals shift into the private market, has made auction houses more likely to offer deals to consignors. This can include sharing a percentage of the buyer’s premium with the consignor.
In one case reported in the New York Times, Christie’s cut Peter M. Brant in on the buyer’s premium charged to the purchaser of a
Koons
balloon dog he consigned. In fact, a large chunk of the premium went to Brant because the work didn’t exceed an undisclosed agreed-upon value, even though it fetched $58.4 million in November of 2013.

What is an estimate?

An estimate is the price range, from low to high, in which a work of art is expected to sell.

Once again, that seems pretty simple.

Once again, not so fast. Auction houses began providing estimates in the early 1970s as a way to get people to consign their work. Today, estimates can still impact if someone is willing to part with a piece. Should the auction house come in with an estimate that is too low in the eyes of the seller, they might not consign the work. If the estimate is too high, buyers might not take a first bite, causing the work to be burned.

Yes, and it is often journalists like your humble writer who get played for the fool. During more tepid markets, auction houses may artificially lower their estimates. So even with weak demand compared to prior years, a sale may fall squarely within the high and low estimate. This earns confidence-boosting headlines that in turn generate more business.
Alternatively, marquee lots may have their stature raised further when the auction house only grants estimates “upon request.” This is both prestige boosting and if the estimate isn’t readily available, then there is nothing to temper a work attaining a record price at auction (breaking a record is less impressive when that record is, say, the work’s low estimate).
Even for such lots, ballpark estimates can still become public knowledge anyway, so the auction house has an incentive to keep them modest. When
Picasso
’s Les femmes d’Alger (Version ‘O’) sold for $179.4 million at Christie’s in 2015, it set a world record. That might have been less impressive—albeit only slightly—if the auction house had estimated it to sell for somewhere between $170 million and $180 million. Instead, it exceeded its estimate of somewhere in the region of $140 million handily.
Isaac Kaplan is an Associate Editor at Artsy.
Related Stories