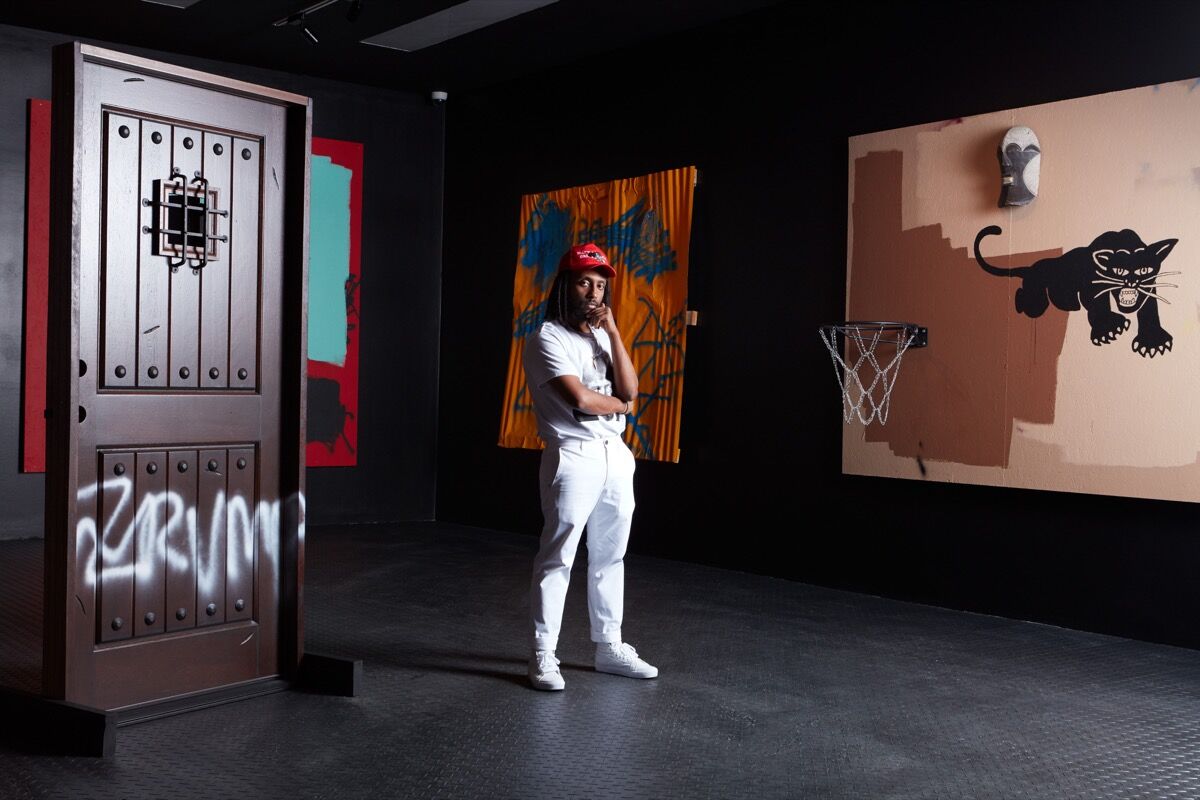 Awol Erizku
was thrown into the spotlight recently when it was revealed that he was the photographer behind the viral portrait of a pregnant Beyoncé Knowles. But now, the young L.A. artist is making waves in London for a decidedly different reason. His new solo show at Ben Brown Fine Arts is a fierce, anti-Trump statement on race and politics.
Titled “Make America Great Again,” the show features all new paintings by Erizku, who has transformed the white cube space by painting it floor-to-ceiling black. And for nine of the 14 paintings on view, he’s adopted
Emory Douglas
’s logo for the Black Panther party.
“It’s such a powerful symbol of black power, and that’s the one thing I really wanted to put out there at a time like this,” Erizku explained. “At a time when we have this insane—I don’t even want to call him president—guy in charge of a great nation, I just wanted to combat that and that’s where the American flag with the panther symbol came in.”
He notes that he wanted to make a statement with this show, but felt that displaying these works in the U.S. at this time would have drawn the wrong kind of attention, not the positive kind. “I don’t know what they would have done if I’d opened this show in America,” he says. As a black Muslim man he is shocked and saddened by the actions of President Trump thus far, and the atmosphere of bigotry they have created. 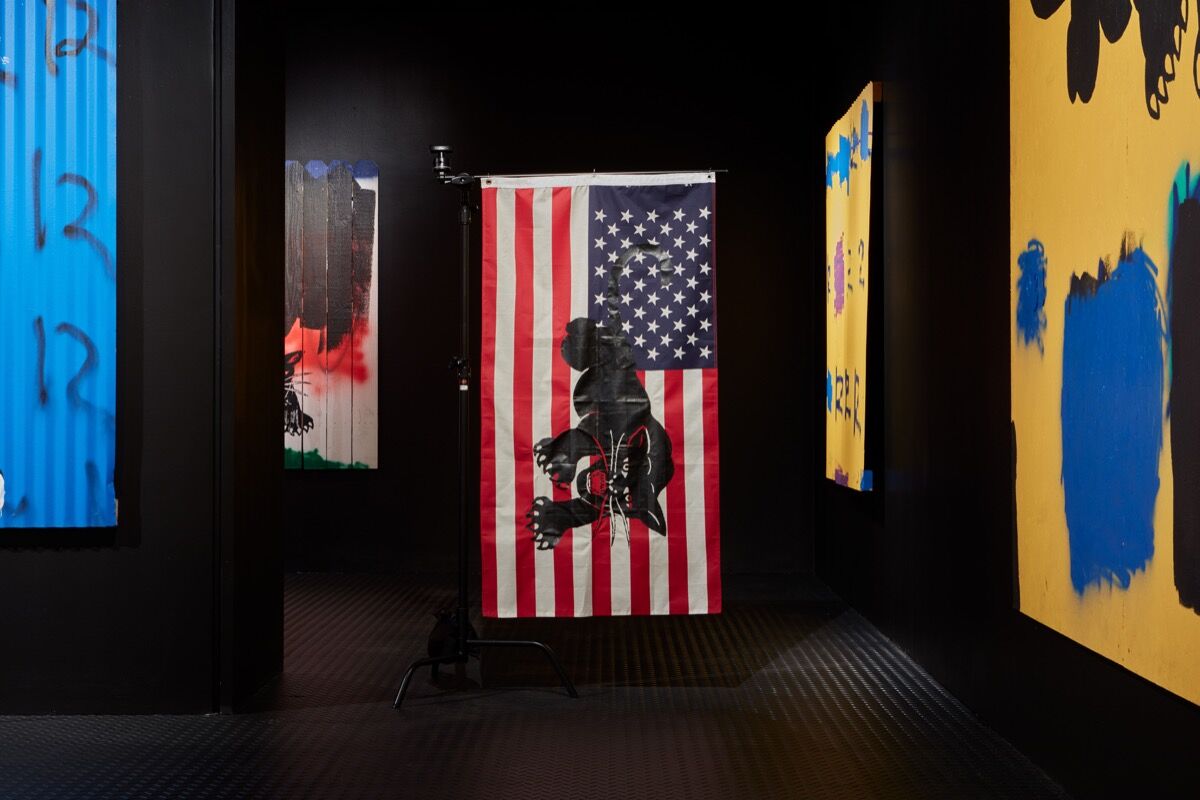 Erizku was born in 1988 in Ethiopia, before moving to New York with his parents as a young child; he grew up in the South Bronx. He studied at Cooper Union, where he first discovered photography, and went on to earn his MFA from Yale.
He was drawn to making art because he always felt underrepresented by the work he saw in school and museums. “I remember being in a classroom where I was told to study all these European masters and see all these European representations of the ideal beauty and I remember thinking ‘What about me? What about the people that look like me?’”
Erizku sees his work as a mission to turn this on its head. A well-known early work, Girl With a Bamboo Earring (2009), is a redux of
Vermeer
’s Girl With a Pearl Earring, featuring his sister. He later did a series of portraits of sex workers in Ethiopia, which show his subjects looking very natural, yet immaculately lit in classical poses.
This take on identity, a more nuanced one than is often proffered, is the product of an effort to combine his love of the United States and identity as an American artist with his Ethiopian roots. In seeking to marry the two cultures, rather than view them as two separate identities, he intends to present us with a new aesthetic.
“I think making art was something that once I was older was a no-brainer,” he remembers. “Once I had the chance to make work and find my voice, all I wanted to do was populate museums and galleries with images that people who look like me would feel comfortable looking at.”
With this new show Erizku is embracing his mission to improve the representation of black people in art. This can be seen most directly in his work HOW THAT MAKE YOU Feel? (2017), in which he has emblazoned an American flag with the Black Panther logo. By showing these two emotive symbols together, he makes them equal, then poses a question to the viewer, almost asking them how uncomfortable it makes them. 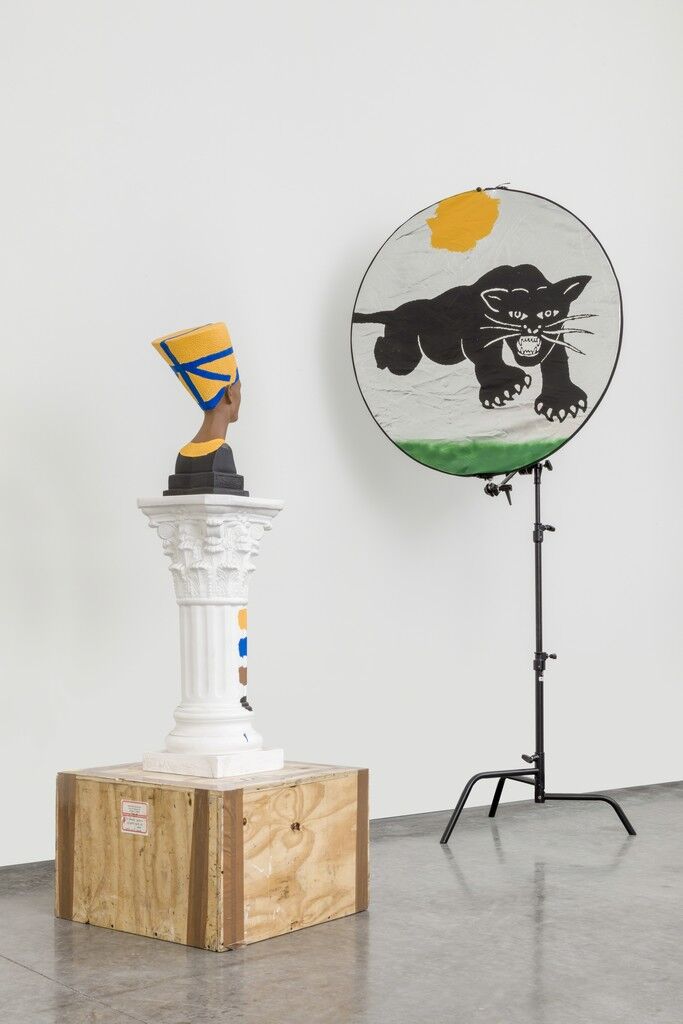 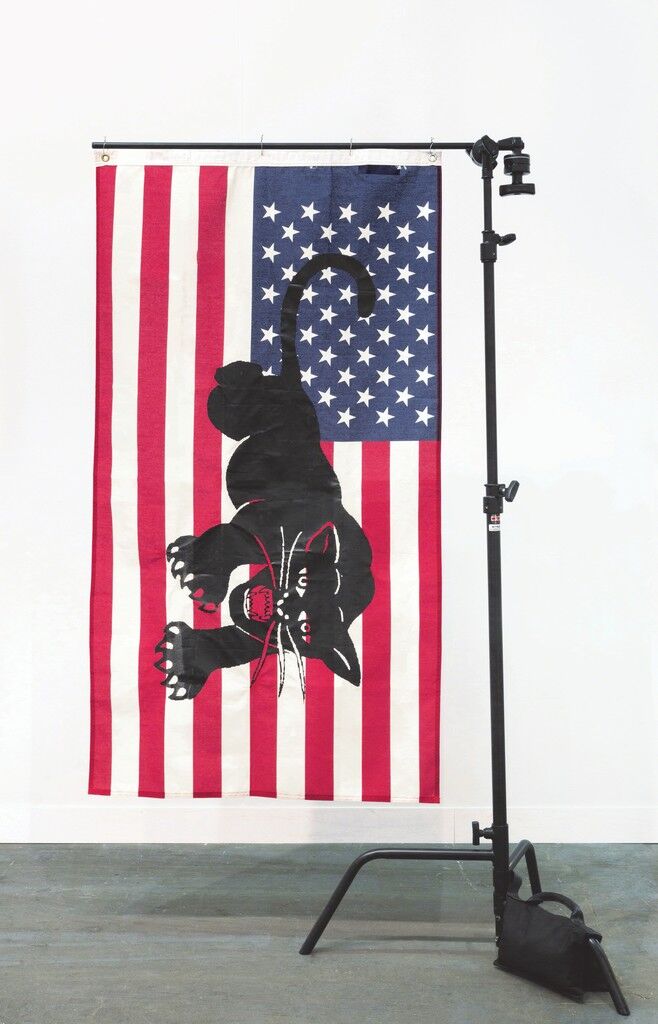 Awol Erizku
HOW THAT MAKE YOU FEEL?, 2017
Ben Brown Fine Arts
Advertisement
In another work, Them Changes (2017), he tackles Trump head-on. “Trump” is spray-painted on a wooden door, but inspired by graffiti he saw in Los Angeles, he replaced the “T” with a Swastika.
The show is set to the soundtrack of a mixtape, a recurring practice for the artist, who creates these audio works both independently of and in conjunction with his painting and sculpture. In this case, the samples he employed, both spoken word and instrumental, are intended to relate to the artworks on display.
This mixtape includes recordings of
Kerry James Marshall
and Bill Cosby. The latter, notorious figure can be heard discussing European appropriations of traditional African art, and while he makes salient points, the thought of celebrating Cosby, given recent sexual assault allegations against him, is bound to raise a few eyebrows. Erizku feels strongly that the heroes of the black community often fall from grace, and he questions why that is.
He counters this with Muhammad Ali (2016), an assemblage made from an African tribal mask, a basketball hoop, and the Black Panther Party logo, with which he honors a figure he calls an idol, but also calls attention to a hero of the black community who never fell from grace. 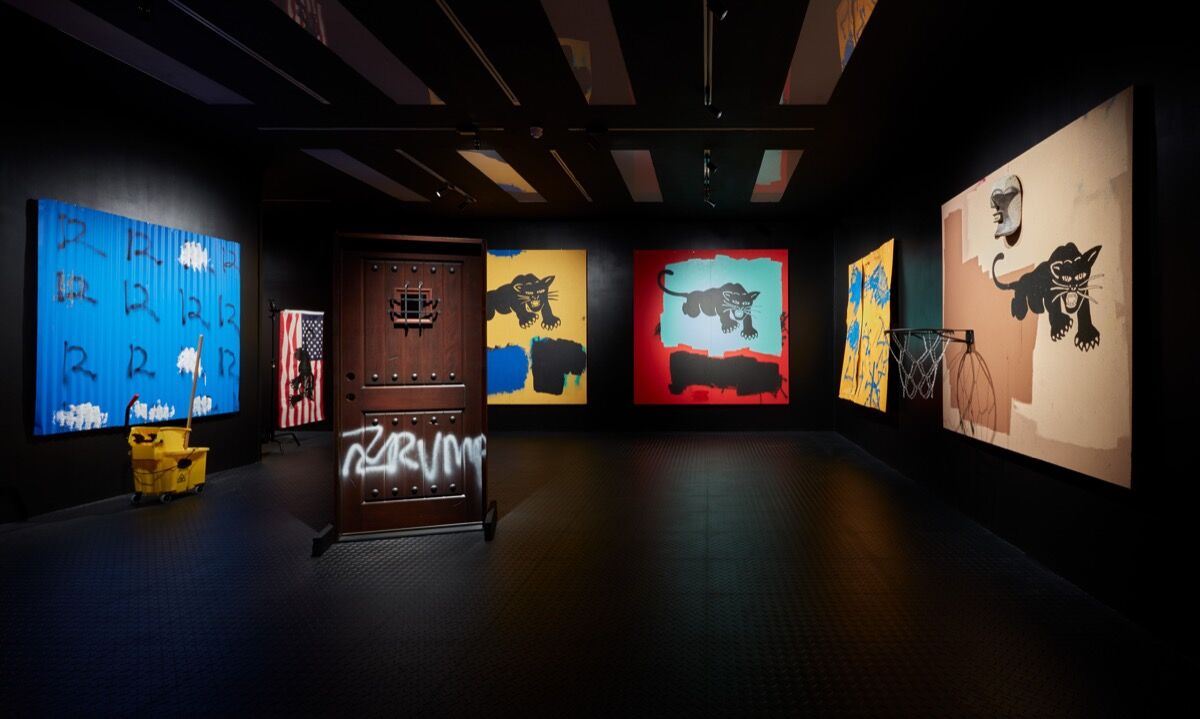 With his pairings of strong, impactful visuals and political messaging, Erizku aims to reach the broad audience he ultimately wishes to communicate with. He cares more about engaging this audience than whether or not everyone agrees with him.
His head-on approach to race and politics has garnered a negative response from some quarters in the past, but these reactions have only served to spur motivation.
“I’ve come to understand that if certain people don’t react that way to my work then I’m not doing my job as an artist,” he says, speaking like a young artist preparing himself to become an agitator.
—Amah-Rose Abrams
Related Stories 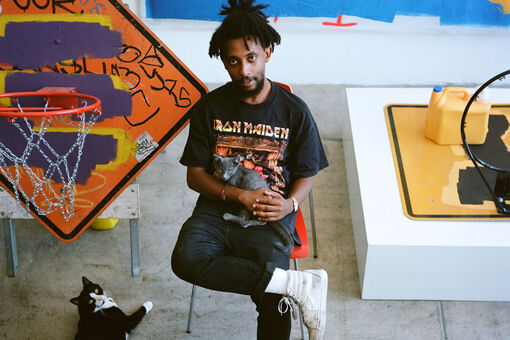