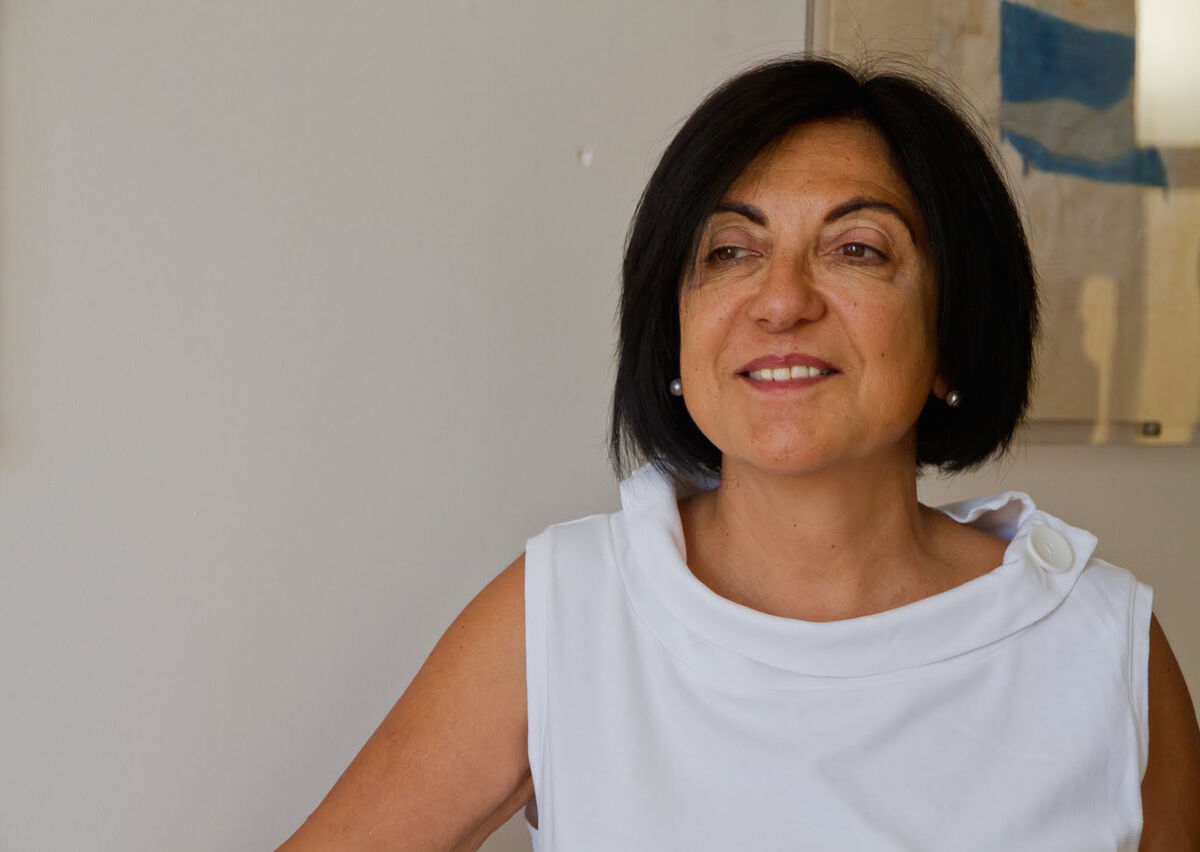 Although recent attention has focused on Köker’s photographic collages, the Berlin and Istanbul-based Turkish artist is first and foremost a sculptor. After graduating from art school in Istanbul as a ceramicist, she studied industrial design and sculpture in Berlin, and went on to teach art at Burg Giebichenstein School of Art and Design, where she specialized in postmodernism, specifically immigration and hybridity, two issues integral to the the German-Turkish socio-political landscape.
Köker is deeply interested in philosophy, both as a professor and an artist. She quotes Ludwig Wittgenstein while talking about popular television shows, reads cultural theorist Homi K. Bhabha’s texts to better understand the through lines between art and social science, and attends lectures in Berlin to stay on top of the latest philosophical debates. “I think art is coming closer to science,” she says, “and that’s why more and more artists are taking a documentary approach in their practice.”

Azade Köker, Crescendo in the City, 2013, courtesy of Elgiz Museum of Contemporary Art and Galeri Zilberman.

Köker counts herself amongst this group. Her sprawling collages, some spanning over 13 feet, are built from hundreds, sometimes thousands, of photographs and found images of her surroundings. From afar, they resolve as unified images—politically charged landscapes and cityscapes, mostly. Upon closer inspection, though, it becomes clear that each photograph has been carefully cut into the shape of human figure or skull—a reference, perhaps, to vanitas, a technique traditionally used in Flemish
still-life
paintings, where objects, like skulls and dead flowers, serve as harbingers of mortality.
Crescendo in the City (2013), for instance, is a daunting work that takes a much-circulated image of riot police in Istanbul and merges it with skulls in shades of pink and gray. “During the Gezi protests in 2013, a performance artist simply stood at the Taksim Square staring at the riot police,” explains Köker of the piece’s political underpinnings. “Without saying a word, he prompted others to imitate him. The repeating human figure in the collages might have emerged around that time, and it has stayed with me.”
Köker’s collages allude to global political constants: war, public protests and police brutality, environmental pollution and disasters, destruction of nature, and urbanization. Her sculptures, meanwhile, approach these charged subjects with a different tack—they are less fastidious, and more forthright, than her collages. In Rhizom (2015), the first piece you see upon entering the exhibition, the artist casts tree parts, then coats them in rusty gauze, as if dressing a wound or a fractured limb. Severed mid-trunk, the ghostly white, gnarled form hangs from the ceiling, its branches missing, and its roots hanging limp and exposed. Truncated and unanchored, the tree becomes a stand-in for the nomadic, rootless tendencies of contemporary culture. 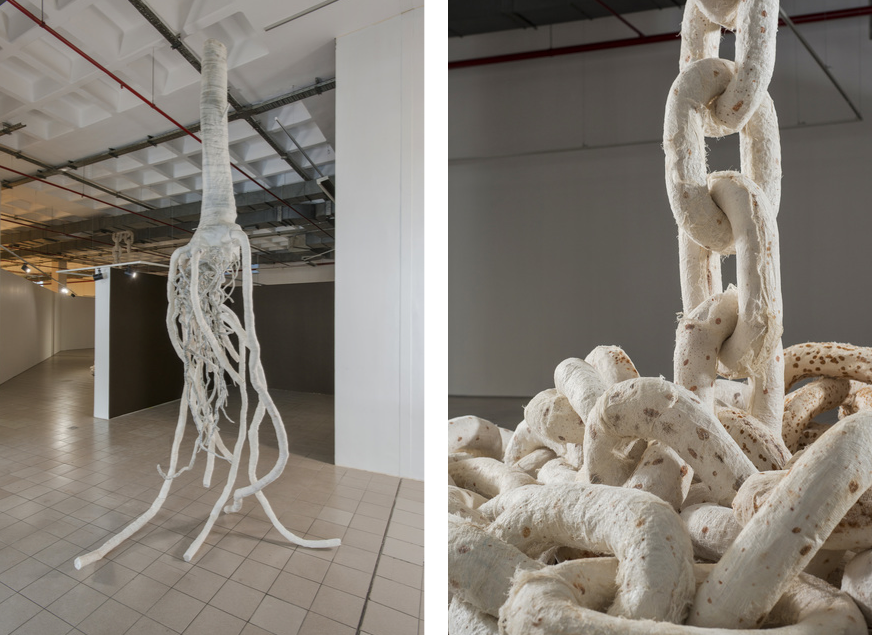 Advertisement
Köker believes we are in a state of global dissolution. Refugees leaving their war-torn countries to find hope elsewhere, disaster survivors running for safer ground, citizens revolting to defend their basic rights, capitalistic consumption devouring nature for profit—these are issues that permeate the artist’s work. In the main gallery, the exhibition’s namesake piece, Dissolution (2015), is a towering, 16-foot white chain suspended from the ceiling and coiled into a heap on the museum floor. The work’s giant links are covered with spots of rust, but the chain is not metal; rather, it’s paper tarnished with chemicals. While immense, the chain is also delicate and diseased, perhaps implying that the links that hold things together are on the verge of collapse—or, less ominously, that the fetters that impede freedom have the potential to be broken. “Some philosophers see the chain as a negative symbol and some positive,” she says. “There is a duality between good and bad, and I’m most interested in that.”
—Hande Oynar
“Entkettet – Dissolution,” is on view at Elgiz Museum of Contemporary Art, Istanbul, Oct. 9, 2015–Jan. 7, 2016.
Follow Elgiz Museum of Contemporary Art and Galeri Zilberman on Artsy.
Related Stories

How Collectors Can Avoid Buying Forged Works by Basquiat, Haring, and Warhol