Artsy Editors
Jun 16, 2015 11:17am
Noah Purifoy
’s art practice was sparked after the 1965 Watts rebellion, during a charged period in Los Angeles’ history of racism. It was August 11, 1965 and a young African-American motorist named Marquette Frye was pulled over by California highway patrolman Lee W. Minikus on suspicion of driving while intoxicated; the incident occurred in Watts, a low-income African-American neighborhood in South Central L.A. Widespread outrage at this act of racial profiling set off a rebellion that took 34 lives, injured more than 1,000, led to the arrest of almost 4,000, and destroyed $40 million worth of property. Purifoy’s first major body of work, “66 Signs of Neon” (1966), was created from the charred debris—burnt wood, broken bottles, and ravaged steel—from that event. The artist would also become the founding director of the Watts Towers Arts Center, a community arts center that opened in 1970. 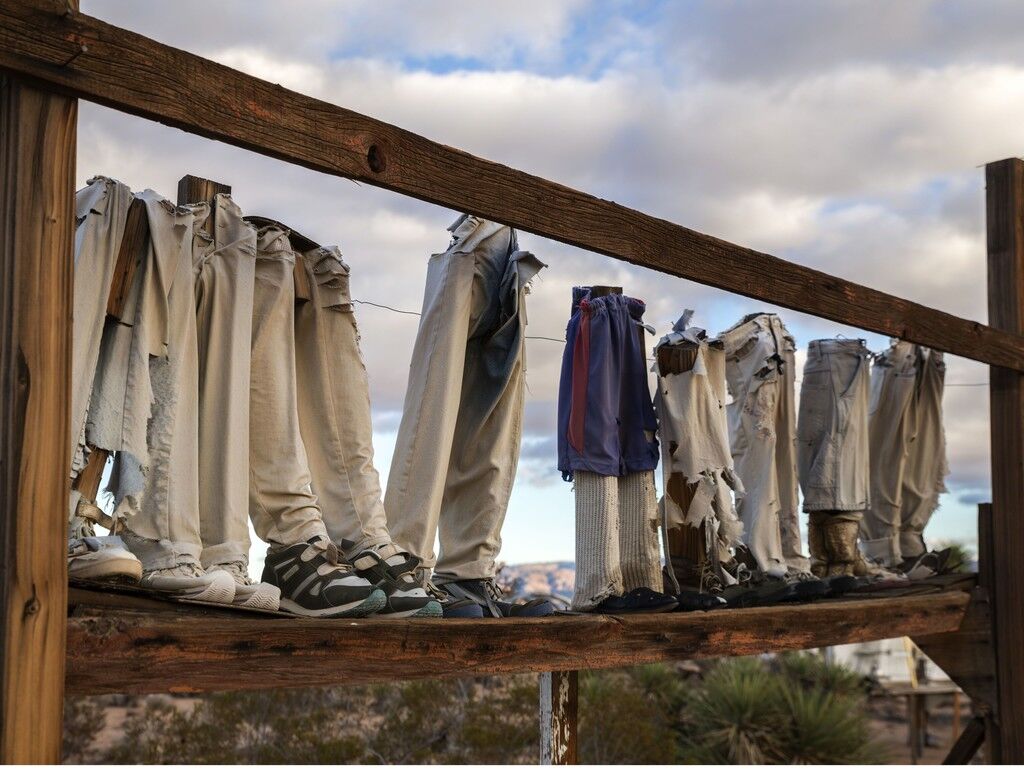 Noah Purifoy
From the Point of View of the Little People, 1994
"Noah Purifoy: Junk Dada" at LACMA, Los Angeles (2015)
Purifoy’s posthumous retrospective at the Los Angeles County Museum of Art (LACMA), “Junk Dada,” highlights three major bodies of work from his lifelong career: the “66 Signs” project, his 1971 site-specific installation about the black working class at the Brockman Gallery in Leimert Park, and the desert sculptures he made in Joshua Tree from 1989 until his passing in 2004. Alongside Purifoy’s engagement with social injustice, his interests in popular culture and jazz carry through the details of the works on display. 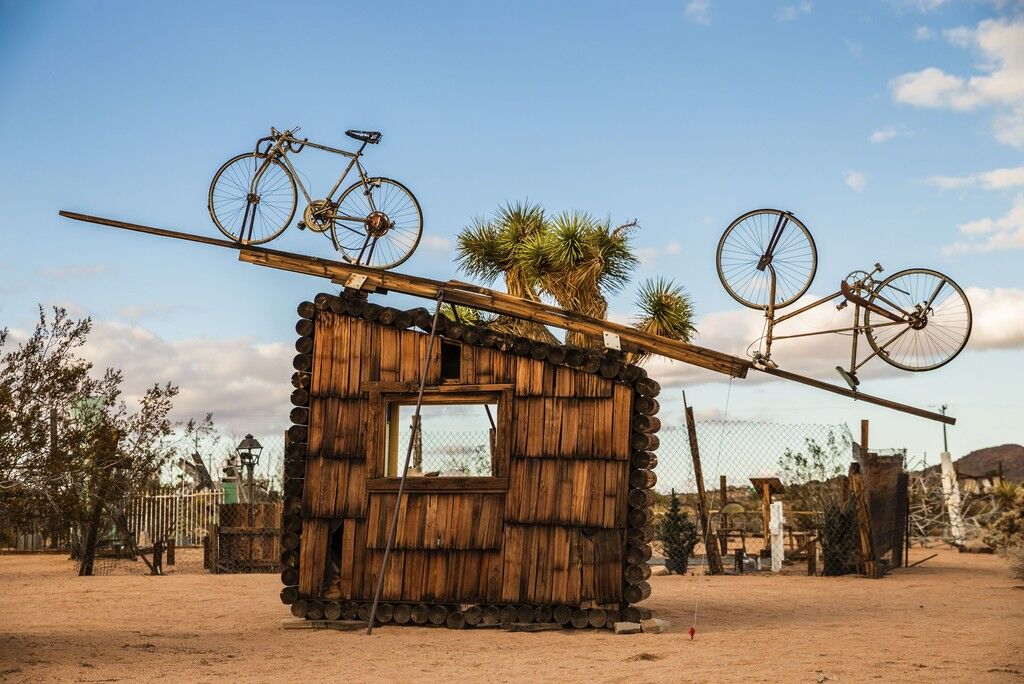 Noah Purifoy
No Contest (bicycles), 1991
"Noah Purifoy: Junk Dada" at LACMA, Los Angeles (2015)
Advertisement
The exhibition of large-scale works, many of which were conceived to live outdoors, surfaces a big curatorial conundrum: how does a museum properly recontextualize site-specific “junk” assemblages that exist on a 10-acre span of land, far into the desert at the Noah Purifoy Outdoor Desert Art Museum of Assemblage Sculpture? It was here that Purifoy crafted them, after leaving L.A. for Joshua Tree. One standout sculpture, No Contest (bicycles) (1991), which looks like a flattened log cabin with a seesaw dropped on top of it, two rusted bicycles balancing its unsteady composition, is installed in the museum inside a sandbox-like structure that mimics a desert ground. Of course, this fake landscape is no match for the fierce winds and unforgiving heat of the Mojave Desert, where it normally resides, and the installation does not take into account the weathering it has endured in this location. In the perfectly refrigerated museum context, the sculpture is preserved and unable to continue its natural decay. 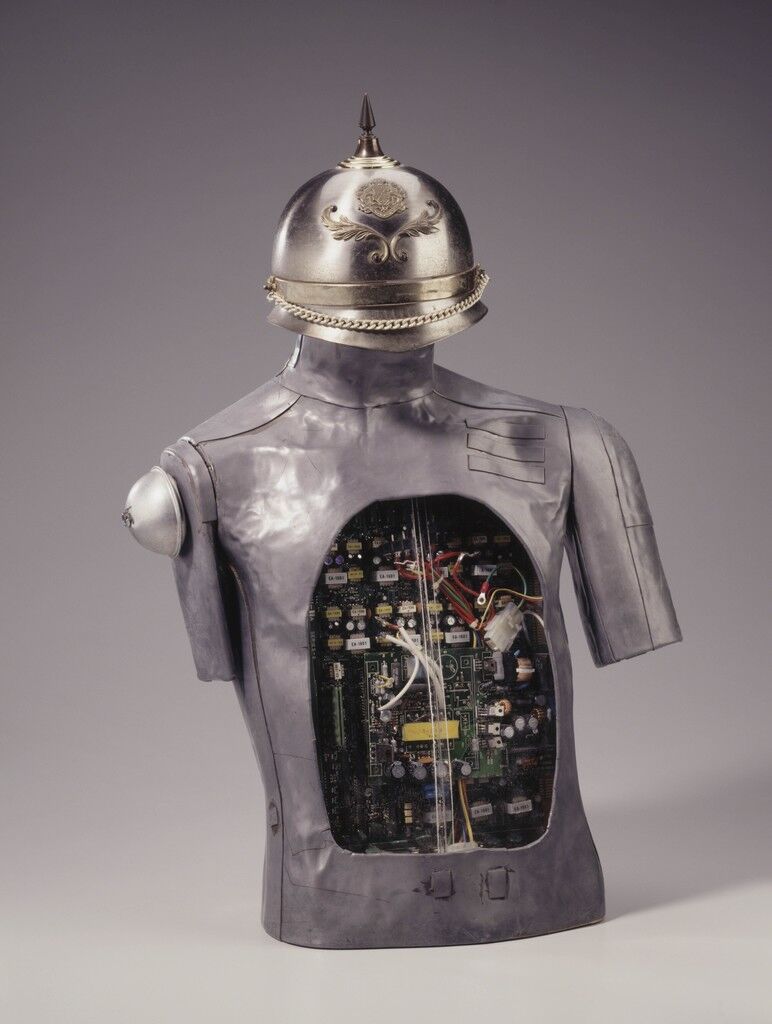 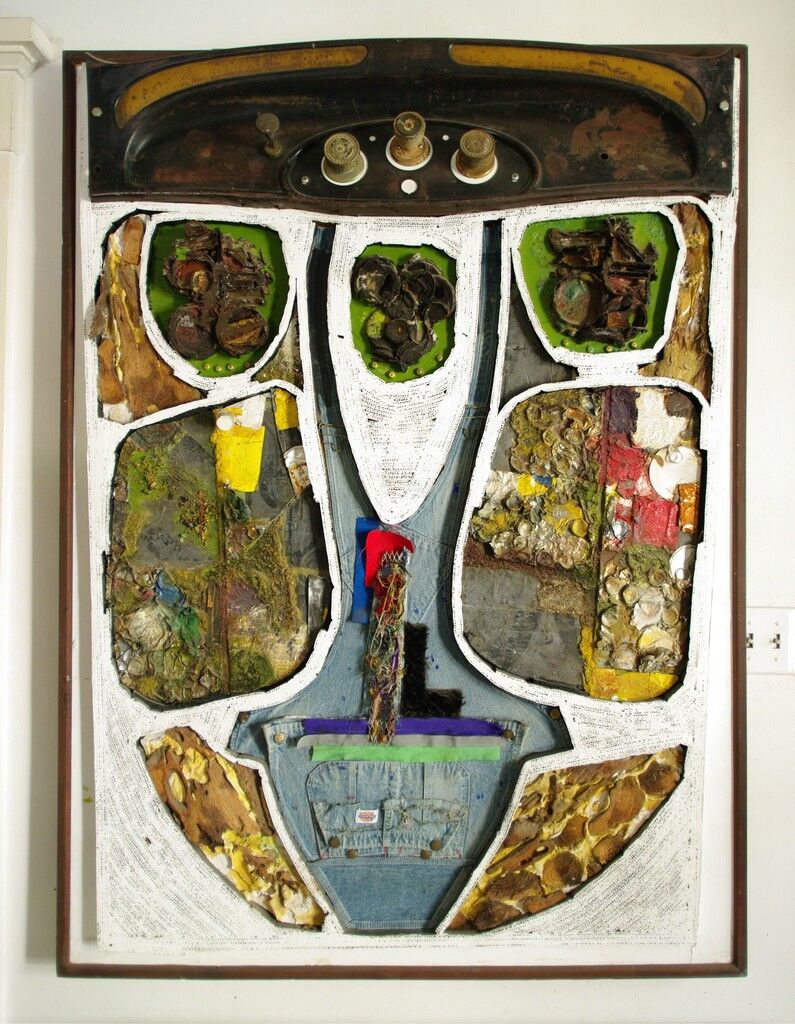 Noah Purifoy
Lace Curtain, 1993
"Noah Purifoy: Junk Dada" at LACMA, Los Angeles (2015)
Placing these site-specific sculptures within the museum setting does not necessarily bring them a “newly charged meaning,” as the museum’s press release suggests (though it certainly grants them broader recognition and a larger audience), but rather makes an argument for them remaining in the desert, where they can more aptly express their post-apocalyptic vision—they resemble structures abandoned abruptly by humans. (The assemblages will be returned to the desert following their temporary installation at LACMA.) However, there are also works on view that are less dependent on their environment and therefore easier to recontextualize. In particular, Sir Watts II (1996), a regal disembowelment consisting of a knight’s torso armor, its stomach cut open to reveal a computer motherboard rendered functionless, stands out on a pedestal at the entrance to the desert sculptures, as if guarding the works. The surprisingly charming figure wears a silver cap over its head, obscuring its face as it greets visitors. 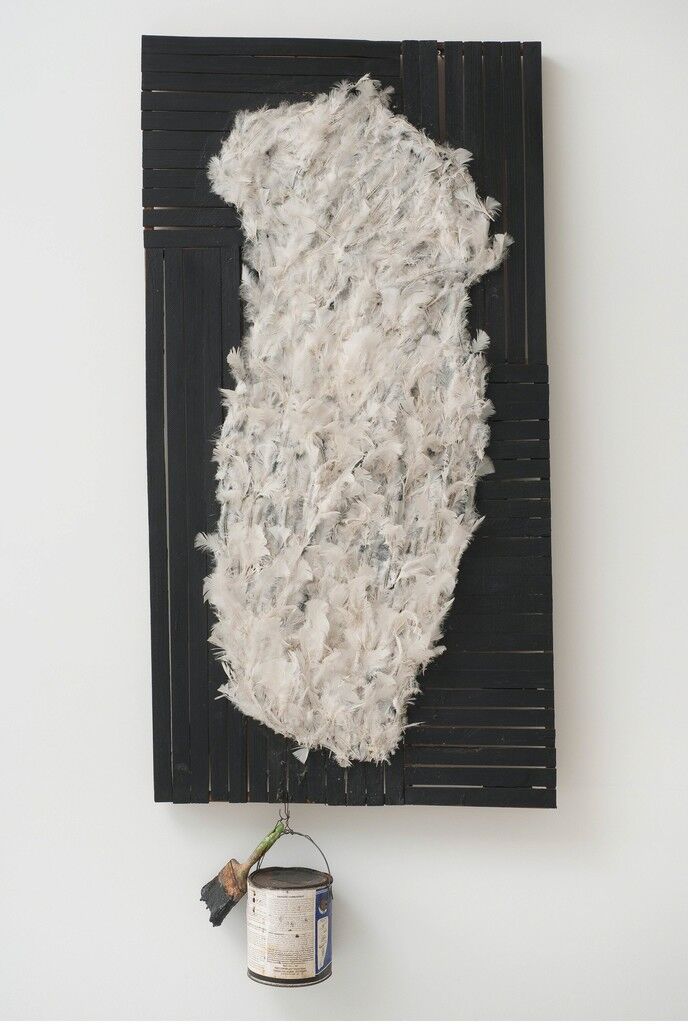 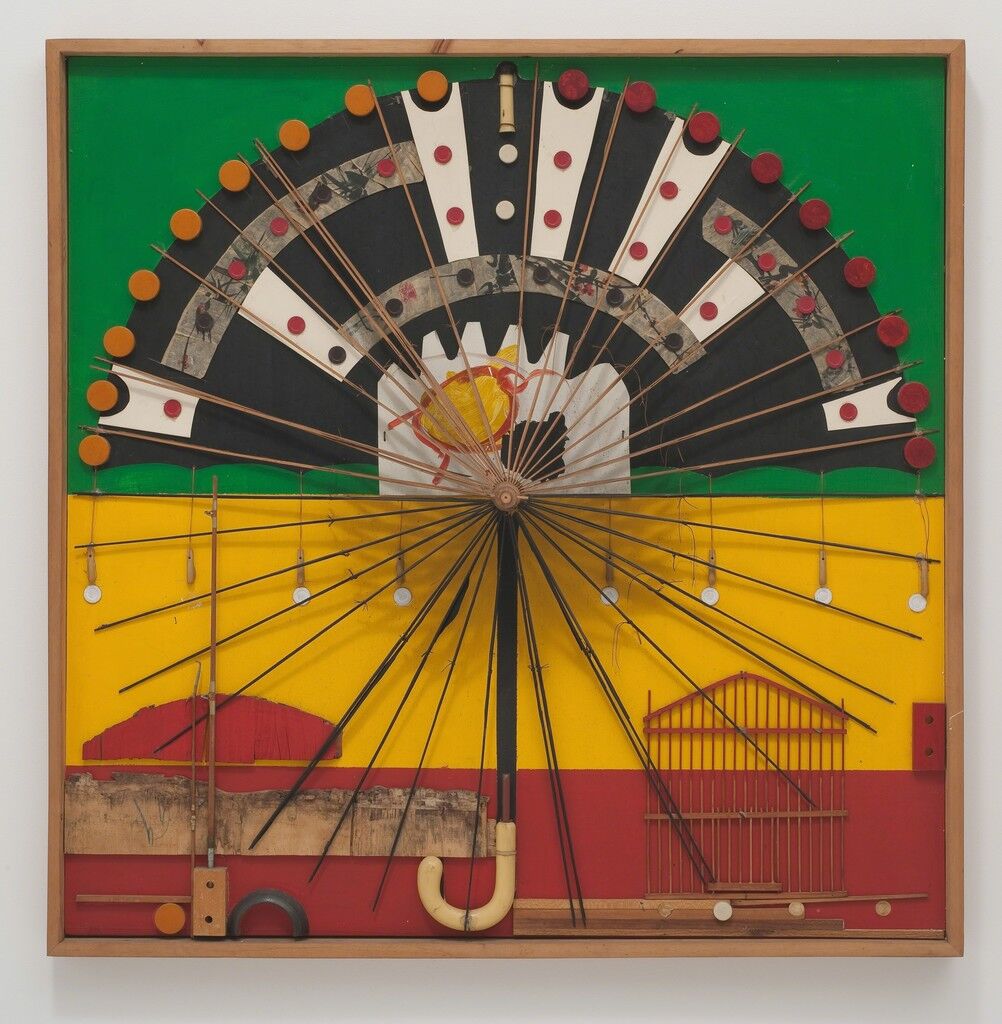 Noah Purifoy
Untitled, 1967
"Noah Purifoy: Junk Dada" at LACMA, Los Angeles (2015)
The more overtly political work in the show rests in a darkened room, partitioned off from the assemblage sculptures and found-object paintings. Here, viewers encounter ephemera related to community work that Purifoy engaged with from 1972-1988 and documentation of Purifoy’s powerful work of social commentary that dates from long before social-practice art became trendy. Titled Niggers Ain’t Gonna Never Be Nothing—All They Want to Do Is Drink and Fuck (1971), the installation recreated the interiors of a working-poor African-American family home. A light bulb was encased in foil, rags overflowed in a sink, roaches scuttled about, and a fried-chicken dinner laid out on a table. It was in 1972, shortly after this exploration  of poverty, that Purifoy shifted his focus, becoming director of community services at Central City Mental Health in South L.A. and being appointed to the California Arts Council by then-governor Jerry Brown in 1976. 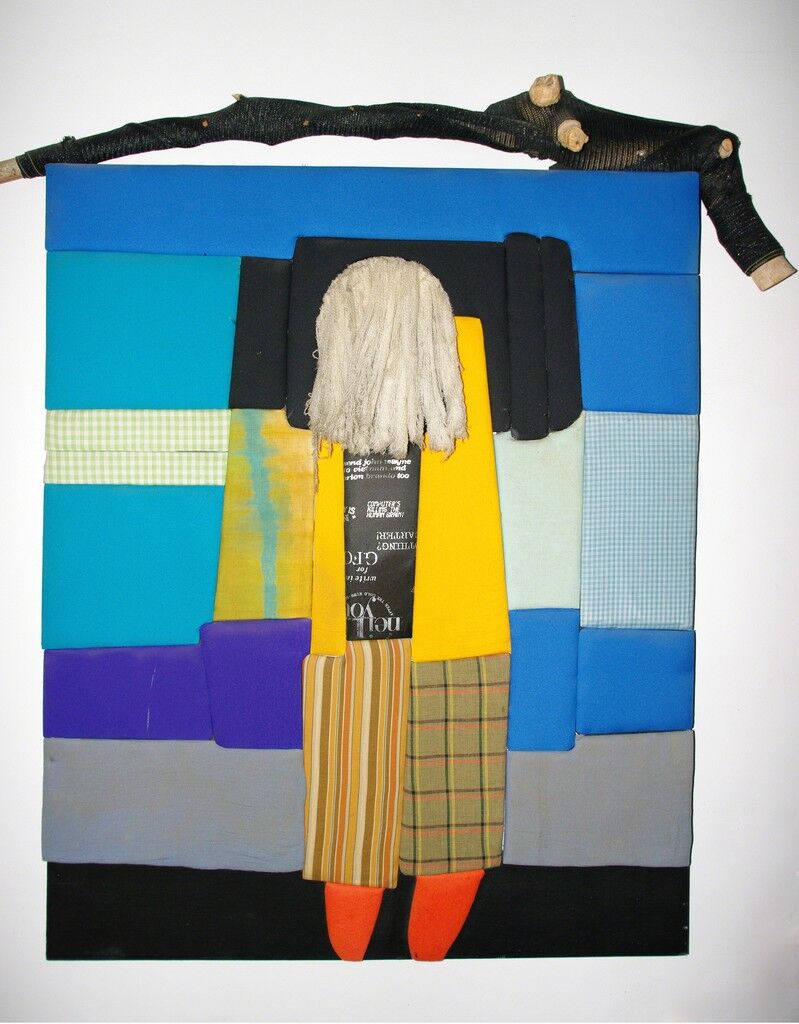 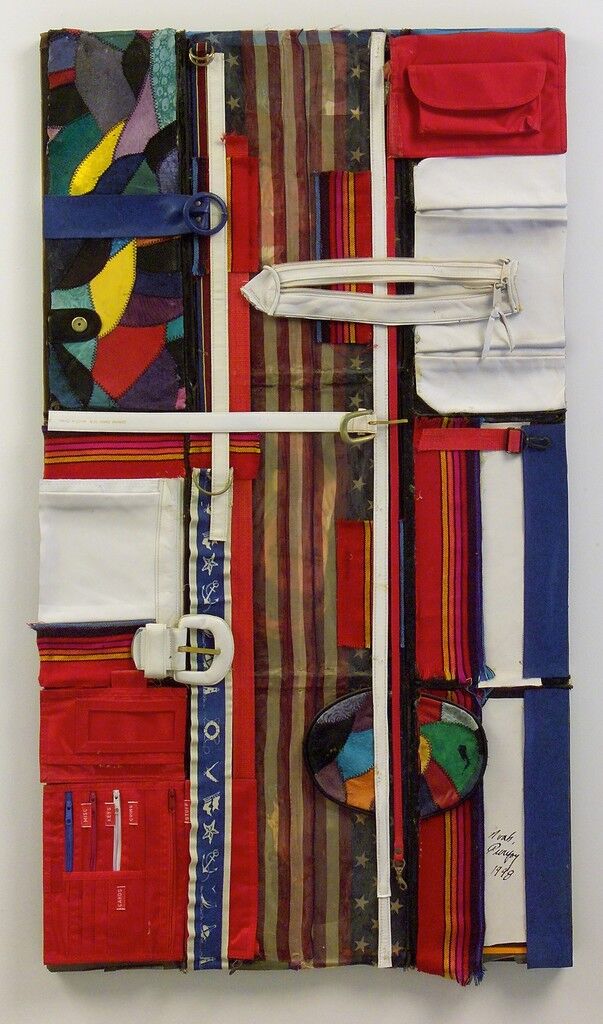 Noah Purifoy
Ladies Handbags III, 1998
"Noah Purifoy: Junk Dada" at LACMA, Los Angeles (2015)
A curatorial statement hanging on the wall inside that darkened space that describes Purifoy as having “dropped out of the art world to become director of community services” during this period is jarring. Though he may not have exhibited commercially during that time, to say he “dropped out” might give the wrong impression. When Purifoy relocated to the desert, he did so out of financial necessity, a fact that underlines his limited means—a circumstance that no doubt hindered his ability to participate in the commercial art world. He was 72-years-old, without a retirement fund, and living off of social security; he could no longer afford to live in central L.A. The inclusion of this point in the wall text reinforces the monied status one must have to remain “in” the art world—and often to enable art-making. 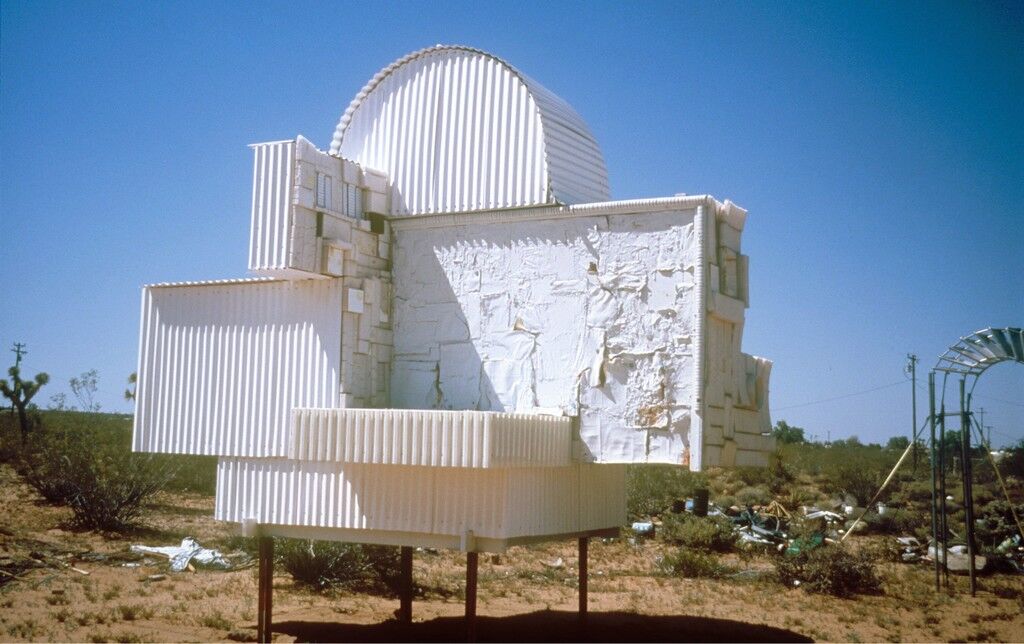 Noah Purifoy
Ode to Frank Gehry, 1999
"Noah Purifoy: Junk Dada" at LACMA, Los Angeles (2015)
Yet the exhibition ultimately makes a strong argument for the value of the work produced in Purifoy’s later period, focusing primarily on artworks he made during those years spent in Joshua Tree after 1989. And by specifically not locating Purifoy’s oeuvre within the designations of outsider or black art, the curators instead align it most closely to the lineage of Dada—suggesting the skewed sense that one attempts to make of a culture ravaged by warring factions. With that in mind, the notion of Purifoy as “dropping out of the art world” reads more as a whimsical pitch from the curators, but also a testament to the fluidity of this artist in rolling with the punches and his radically humane approach to both art and life.
—Alicia Eler
“Noah Purifoy: Junk Dada” is on view at LACMA, Los Angeles, Jun. 7–Sep. 27, 2015.
Explore LACMA on Artsy.
Related Stories