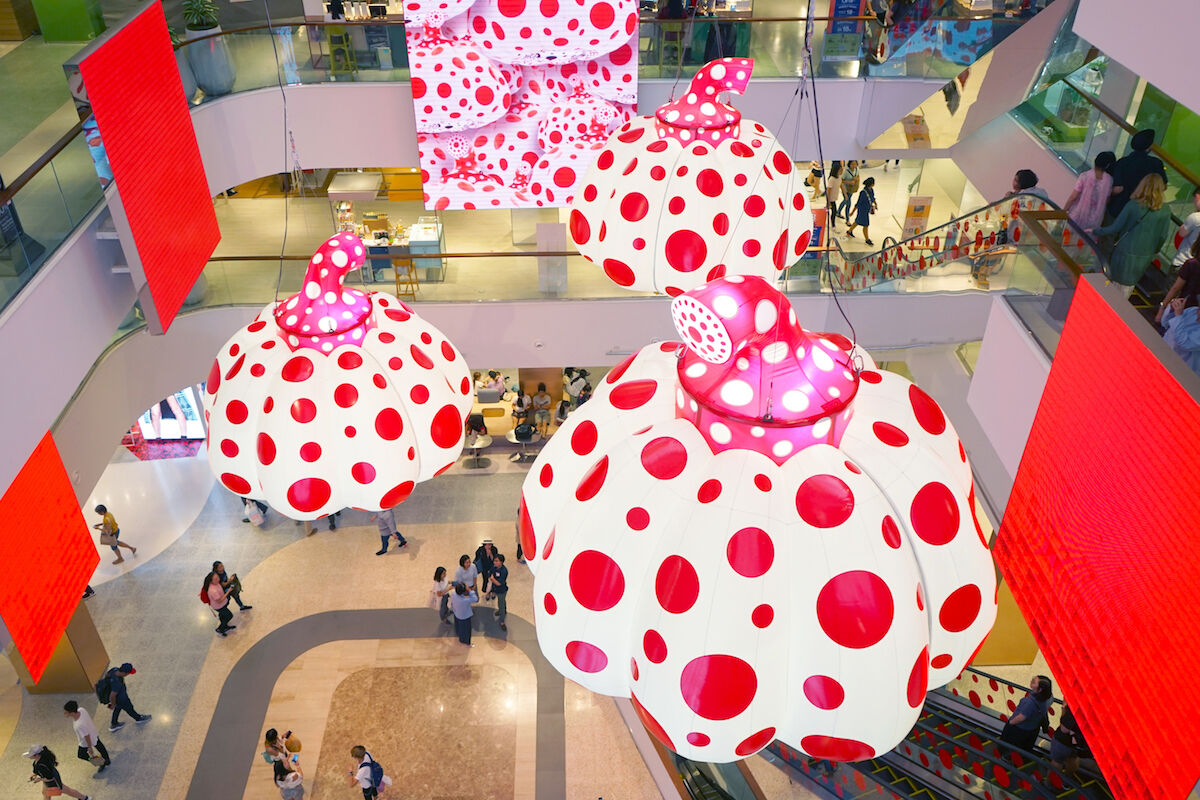 Dr. Apinan Poshyananda takes great pains to point out the connections between the inaugural Bangkok Art Biennale and the high-profile event upon which it and dozens of similar happenings around the world are modelled. Indeed, it was during the vernissage of last year’s Venice Biennale that the chief executive and artistic director of the Bangkok Art Biennale announced the Thai event at the Westin Europa & Regina hotel, on the banks of the Grand Canal. It was also in Venice that he invited the first artist to participate,
Marina Abramović
. And, he points out, Bangkok has long been described as “the Venice of the East.”
But that’s a shabby title shared withat least 12 other cities, including Alleppey—close to the Kochi-Muziris Biennale, which kicks off in December—and both Suzhou and Wuzhen, two water towns less than two hours from Shanghai, where another biennale will begin in November. What makes the Bangkok Art Biennale worthwhile is not its fidelity to the model of Venice, but its uniquely Thai context—and that it’s happening at all, in a city where there’s so little government or institutional support for contemporary art. 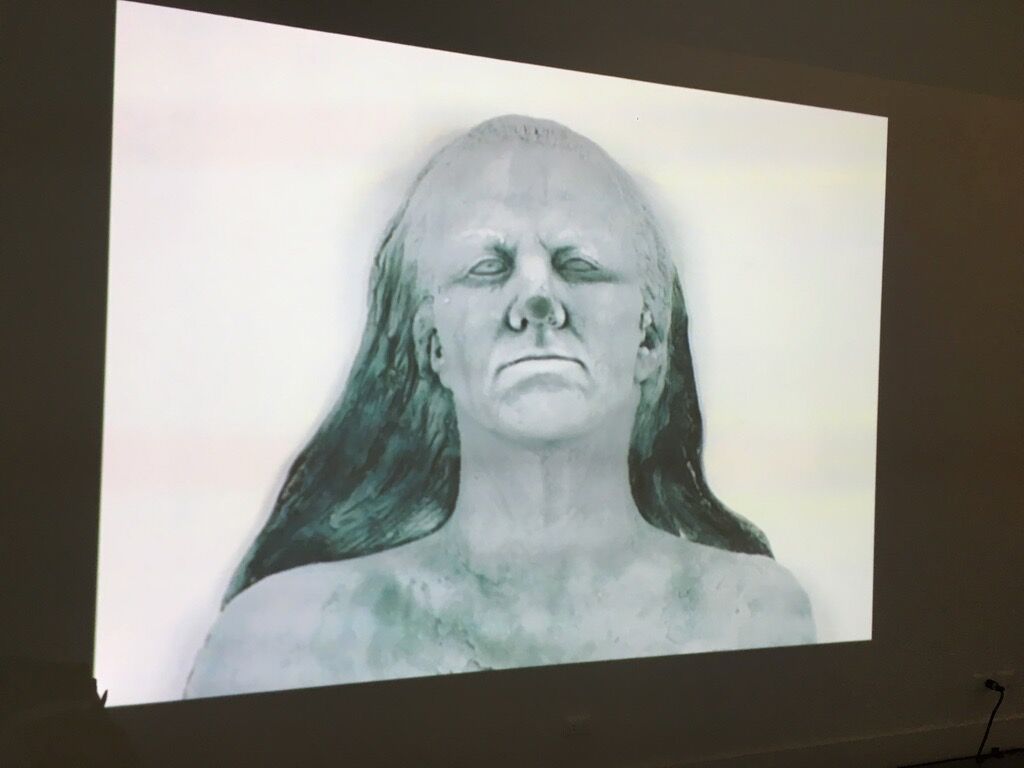 The Bangkok Art Biennale, on view through February 3, 2019, presents artworks by 75 artists in 20 locations best reached by some combination of motorbike taxi, elevated rail, and ferry rides up and down the city’s great aorta, the Chao Phraya River. The spot with the highest concentration of works is the ailing Bangkok Art and Culture Center (BACC), a multi-story, museum-like space surrounded by shopping malls. During a speech at the opening of the biennale, Pawit Mahasarinand, director of the BACC, said, “As you’ve heard in the news, we’re experiencing some budget problems, but this place is still brimming with creativity.” Less than a month earlier, the BACC had reduced its opening hours due to budget constraints. He concluded his remarks with a plea: “Please support art, please help support BACC, and please send a message to everybody that art is important, and we need art in this city.”
For all the institution’s difficulties, the works at the BACC are engaging and diverse. On the eighth floor, eight artists enact solo performances, a method of artmaking that’s integral to creative scenes in Southeast Asia, where resources are often limited and regimes repressive. Abramović herself is not performing, but the Marina Abramović Institute is carrying out a kind of mass-meditation, fitting for what’s in many ways a Buddhist biennial. After locking away their smartphones and watches, it’s the audience who is made present through a series of mindfulness exercises and a heavy duty pair of 3M headphones.
More works are gathered on the seventh floor, including Anneè Olofsson’s video Say Hello Then Wave Goodbye (2004), which shows a frozen black-ink cast of the artist melting onto canvas. At first white with frost, the figure quickly turns black, an accelerated mummification, before ending, in Olofsson’s words, “like a fetus.” The Swedish artist was invited to participate in the Bangkok Art Biennale after taking part in a 2002 show Poshyananda curated called “Beyond Paradise,” which brought Scandinavian artists to Bangkok. Sixteen years later, Olofsson’s work is a good fit for this biennial’s related theme, “Beyond Bliss,” clearly marking out bliss’s limits—with cold, Scandinavian literalism—at birth and death. 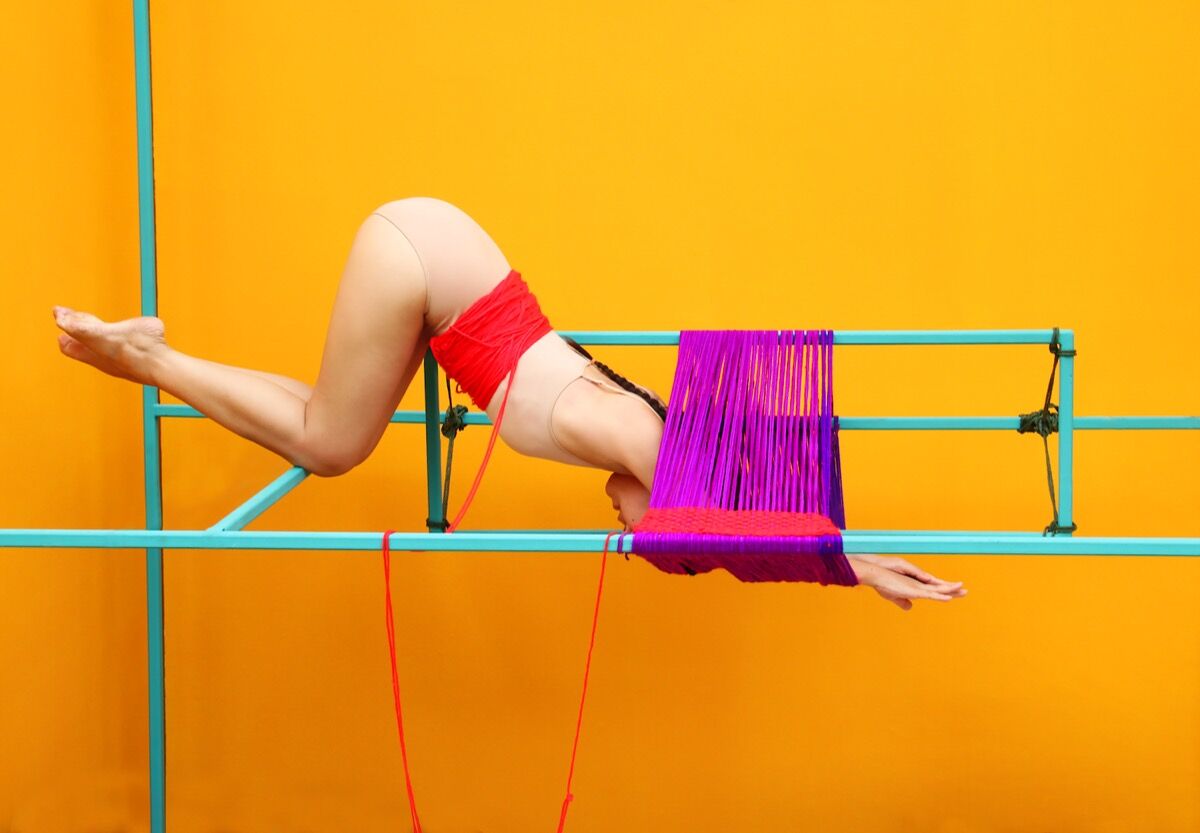 Advertisement
The Bangkok Art Biennale explores the theme of “Beyond Bliss” in very different venues where we might seek it out: shopping malls, five-star hotels, and some of the city’s most prominent temples. The theme at once alludes to a basic precept of Buddhism—to detach oneself from pleasure and pain as a means to transcend suffering—and the hedonism associated with visiting Thailand’s beaches, full moon parties, and red-light districts.
“The government would not talk about nocturnal tourism so much,” Poshyananda said, “but ‘Beyond Bliss’ touches both,” alluding to bliss as both a Buddhist precept and a tourism strategy. He mentions Chumpon Apisuk’s video I Have Dreams (2018), in which sex workers state their disparate ambitions, and Imhathai Suwatthanasilp’s No More Sewing Machine (2018), which incorporates the hair of sex workers, as things the government would never choose to show.
Giving voice to female sex workers is part of the Bangkok Art Biennale’s strong showing of feminist work, especially by women from Southeast Asia.
Nge Lay
created a large-scale sculpture of a vagina out of women’s longyi, the skirts worn by both men and women in her native Myanmar, and invites visitors to step through it. “Men in Myanmar are afraid to touch [women’s longyi], or even to see them hanging higher than the men’s longyi,” she says. 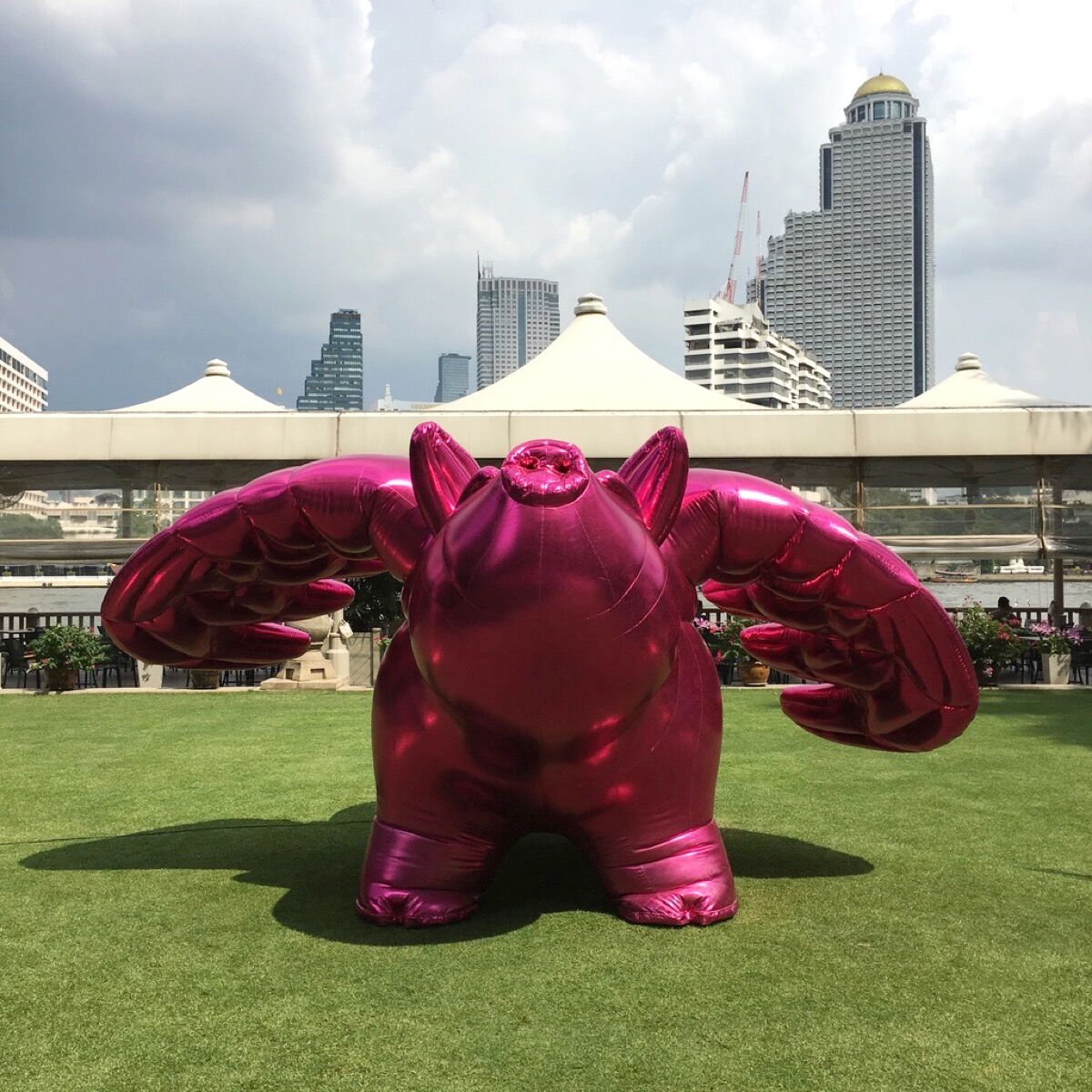 And at the beautiful, crumbling East Asiatic Building, Thai-Australian artist
Kawita Vatanajyankur
makes herself into tools associated with female labor. Shot in a saturated, graphic style reminiscent of juice ads, the videos show her taking deep breaths before her head and upper torso are dipped into red dye, which colors white thread gathered on her head. It’s waterboarding as women’s work. Alongside her videos, Vatanajyankur will perform in person, making her body into a shuttle and throwing it back and forth through a purpose-built loom to create a weaving. Initially, a mattress was put in place to soften her fall, but “I asked her to remove the mattress,” Poshyananda said.
That such works may have Western analogs and precedents in feminist art doesn’t diminish their urgency in Asia, where sexism is omnipresent. Asked whether the Bangkok Art Biennale is a consciously feminist biennale, Poshyananda laughed and pointed to
Aurèle Ricard
’s LostDog Ma Long (2018), a giant, gold-leaf-coated canine sat outside the Mandarin Oriental hotel. “Well, that’s very male,” he said. Most of the oversized sculptures at the Bangkok Art Biennale are indeed by male artists—the sort of eye-catching, artistic equivalents of dick pics that demand you acknowledge how big they are. There’s another dog by
Yoshitomo Nara
, for instance, and
Choi Jeong Hwa
’s inflatables Love Me Pig (2013), Fruit Tree (2017), and Breathing Flower (2016). “It’s not intentional to have more or equal numbers of female artists,” Poshyananda said. “We had open calls. It happens that their works are so strong.”
Thailand nevertheless remains, in many ways, a socially conservative place. At the Jim Thompson House Museum, for instance—a tourist site—guides elect not to show the bathrooms. Feet are considered socially unclean. There’s a strong separation between the sacred and the profane, but art is often both. Yet the Bangkok Art Biennale chooses to spotlight contemporary art in holy, heritage sites like Wat Arun, Wat Pho, and Wat Prayurawongsawas Waraviharn (a.k.a. the Temple of the Iron Fence). 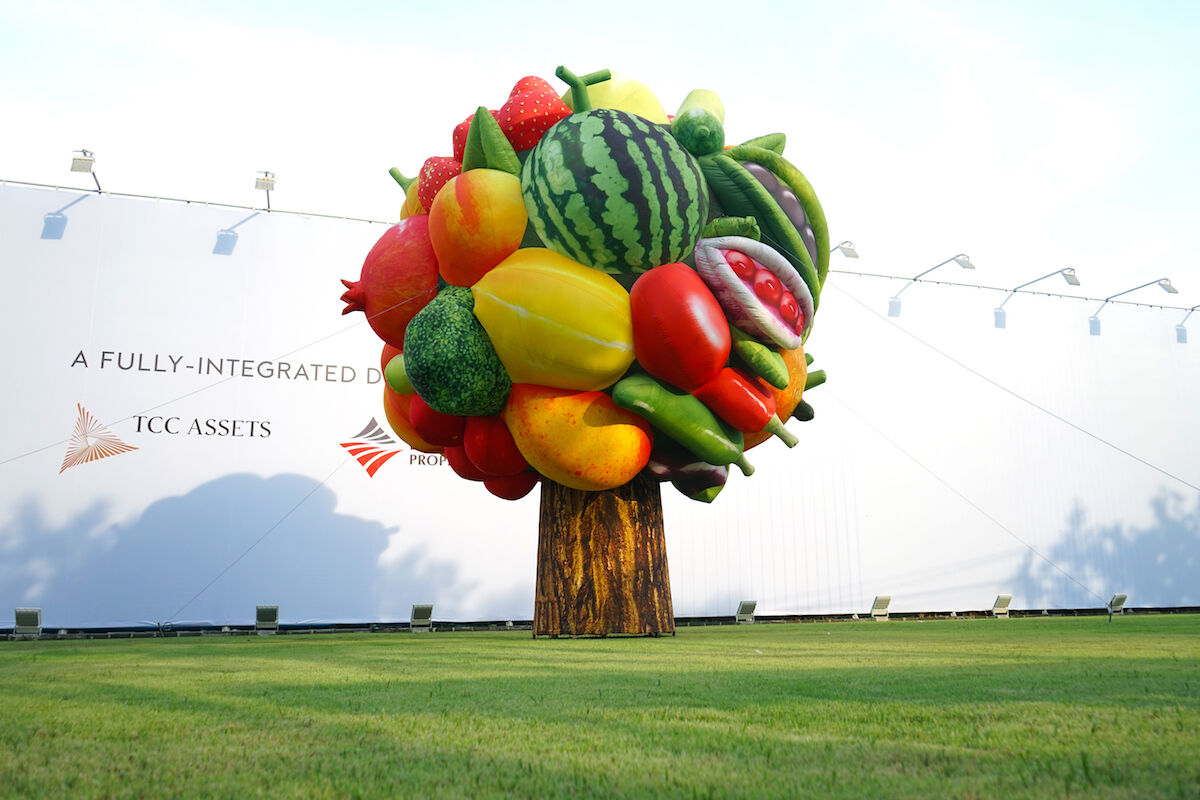 “We chose the most important temples in Bangkok, where 6,000 people go a day,” Poshyananda explained. “I’ve done a lot of talking with abbots, I tell you.” To allay their misgivings, he asked them to consider the art already in the temples. “That’s why Wat Pho and Wat Arun are so attractive—because of the art, okay, as well as religion and faith and all that. But the reclining Buddha is a masterpiece made by artisans.”
Of all the works installed in the Wats, the most cunning is Jitsing Somboon’s #Faithway (2018). Visiting the reclining Buddha, tourists are already given a sort of role to perform—rules of engagement, a route, and even attitudinal cues (“Beware of pickpockets!”). Somboon makes the experience more elaborate by providing costumes to visitors who choose to wear them: white coveralls—like something Supreme might design for freezing workers—that protect them from pickpockets and offer deep pockets in which to carry their shoes. Printed on the back in Thai, English, or Chinese is the word “faith.” Other highlights showing in the temples include
Nino Sarabutra
’s WHAT WILL WE LEAVE BEHIND? (2012)—a group of 125,000 porcelain skulls placed on the floor of the Temple of the Iron Fence’s corridors—and
Sanitas Pradittasnee
’s Across the Universe and Beyond (2018), a red acrylic box inspired by the red skies of Buddhist murals.
Already, the biennale is being trumpeted as a great success by young Thai artists. “We haven’t had this much artwork here before,” Vatanajyankur said. “The BACC is our only devoted art space. Now it’s everywhere. This is beyond my expectations.”

Nino Sarabutra, WHAT WILL WE LEAVE BEHIND?, 2012.Courtesy of Bangkok Art Biennale. 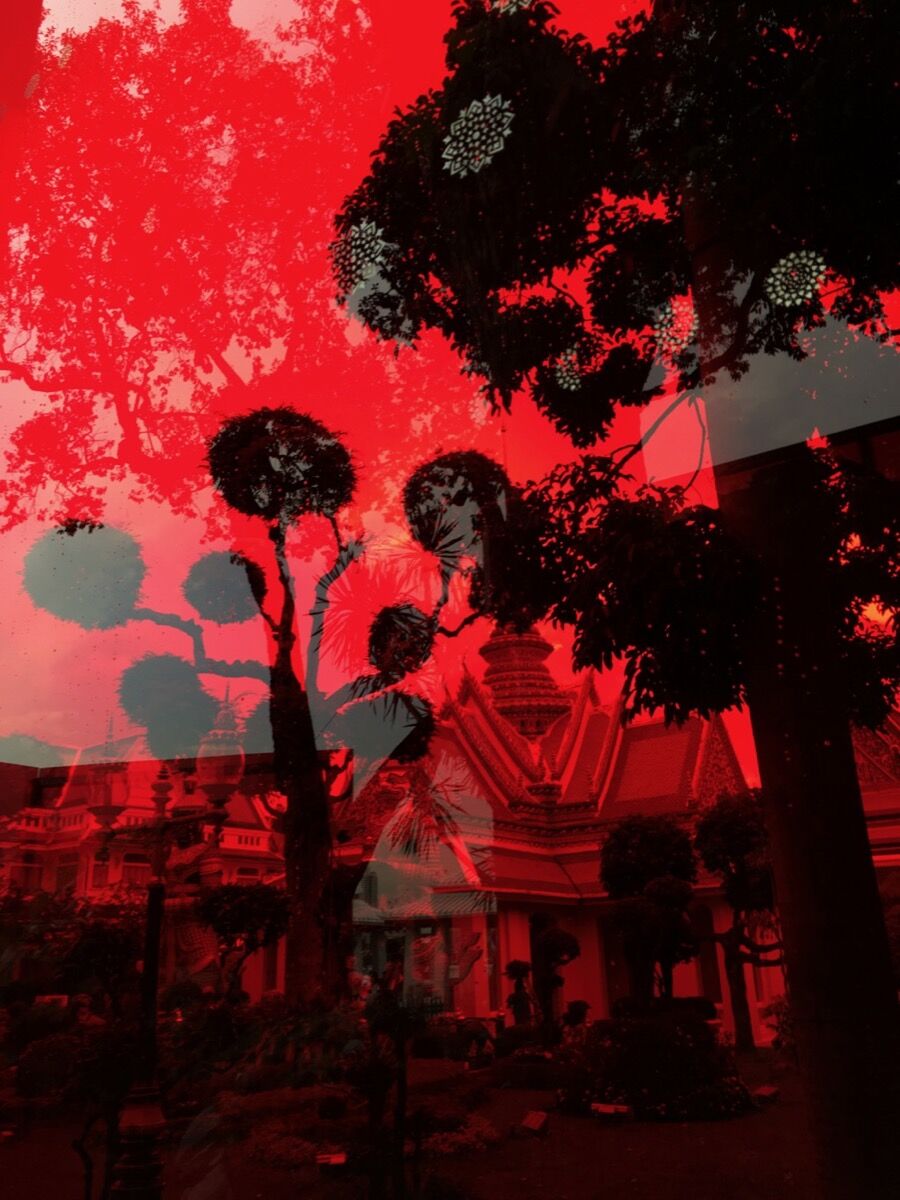 Sanitas Pradittasnee, Across the Universe and Beyond, 2018. Courtesy of Sam Gaskin.

Gesturing towards vendors selling food and drink along Oriental Avenue, near the Mandarin Oriental, Poshyananda said his metric of success is when people, such as the vendors, know what the Bangkok Art Biennale is. “Maybe it means they can sell 100 more bowls of noodles because of the people who come visit, that’s fine,” he said. But beyond that, he hopes to reach people who wouldn’t otherwise encounter contemporary art. “My benchmark is how many people can enjoy art who don’t get a lot of chances to do that,” he added.
There’s a precariousness to an inaugural biennial. In a sense, there’s no such thing—it only becomes a biennial when the second event successfully takes place two years later. With limited government support, corporate sponsorship has been key. Thapana Sirivadhanabhakdi, the CEO of drinks giant ThaiBev, is, for example, the chairman and co-founder of the Bangkok Art Biennale Foundation. A major testament to Poshanandya’s achievements, ThaiBev and other key sponsors have all signed up for the next two editions—in 2020 and 2022—and even the abbots have indicated they’d like to be involved in future editions. “Oh yeah,” Poshanandya said. “They want some of our pieces.”
Sam Gaskin
Related Stories