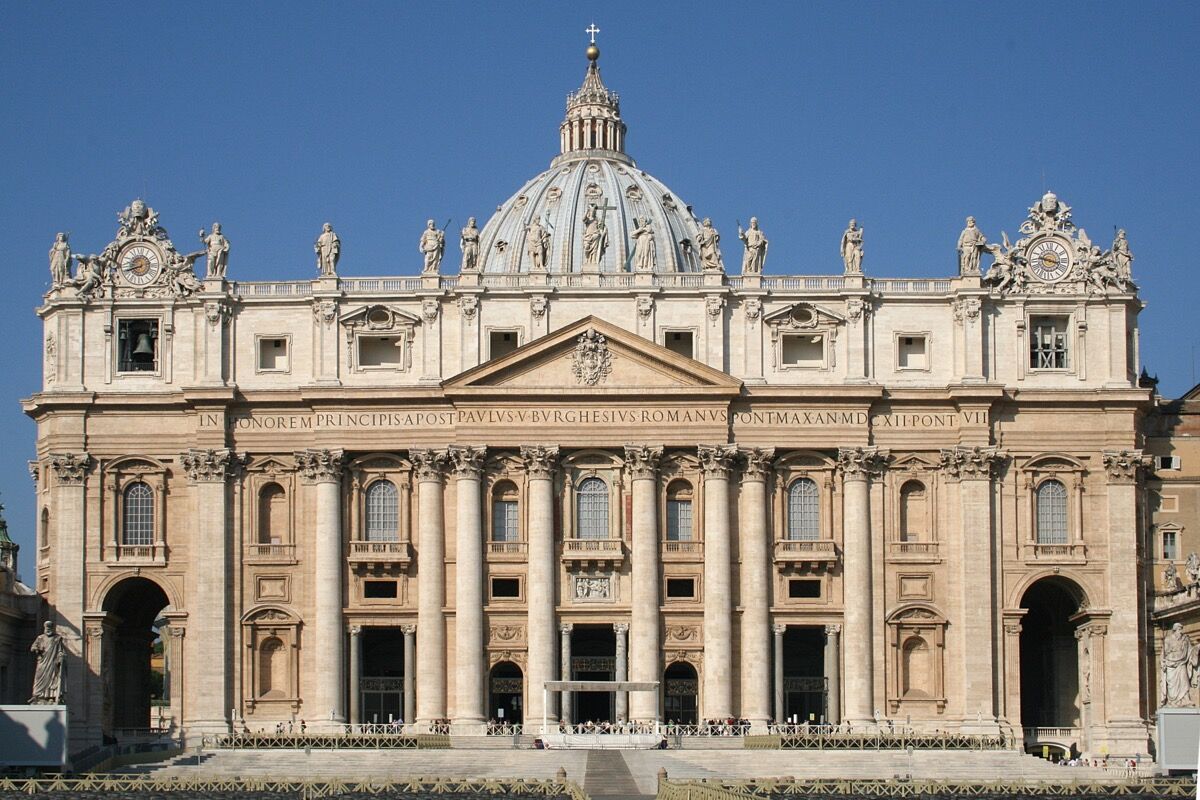 Oscar Wilde had it at least half right when he said, “When bankers get together for dinner, they discuss art. When artists get together for dinner, they discuss money.” I can assure you that bankers are more intoxicated by art than artists are by money. This makes some people nervous.
On the seasonal circuit of galas, openings, and collector dinners (which always remind me of diplomatic functions where the unspoken objective is intelligence-gathering), I hear a frequent concern voiced between the canapés and cocktails: When did the art world become so financialized? The question reveals a yearning of sorts.
Perhaps it’s nostalgia (albeit false) for a time of pure connoisseurship, before the hegemony of the market. Maybe it’s just billionaire-fatigue, by millionaires who can no longer afford to buy pictures. Amongst art critics, “money corrupting art” has its own provenance, from Jed Perl lamenting culture’s “retreat before the brute force of money” in the New Republic, to Peter Schjeldahl’s ire at the “plutocratic orgy” of a recent auction season, to the late Robert Hughes’s annoyance that art has become a “cruddy game for the self-aggrandizement of the rich.” In this era in which critics are prone to engaging critiques of identity and class as much as with the art itself, highlighting the role of “money in art” has become its own form of aesthetic condemnation.
So are the barbarians really at the gate?
History shows us that art’s union with finance—art critic Clement Greenberg called it the “golden umbilical cord”—is hardly a recent development. Indeed, today’s art ecosystem—that fabric of artists, dealers, collectors, curators, flatterers, and social-climbers—grows directly out of a few innovations by those dreaded financiers. Peek behind the curtains of art history, and you’ll find an enduring romance between art and capital.

From Venice to Florence

The courtship began with the invention of merchant banking by Lombardy grain traders in late Gothic Italy. In an era in which lending at interest meant condemnation by the church to an afterlife in hell, Venetian bankers invented letters of credit to skirt usury laws, exploiting exchange rates in different markets rather than charging interest on loans. This put a price on everything, from a prayer for a lost child to a night with a prostitute. The Church had little choice but to enlist bankers in its own ecclesiastical ambitions. The Faustian pact went as follows: Banking families could accumulate wealth lending money via the letter of credit, but were obliged to contribute to the apostolic mission of the church. Cultural patronage became the get-out-of-hell-free card for the super-rich. They funded basilicas and altarpieces as penance, while expanding their banking empires free of perdition. Indeed, much of the art of the early Renaissance was funded thanks to the fear and aspirations of bankers. 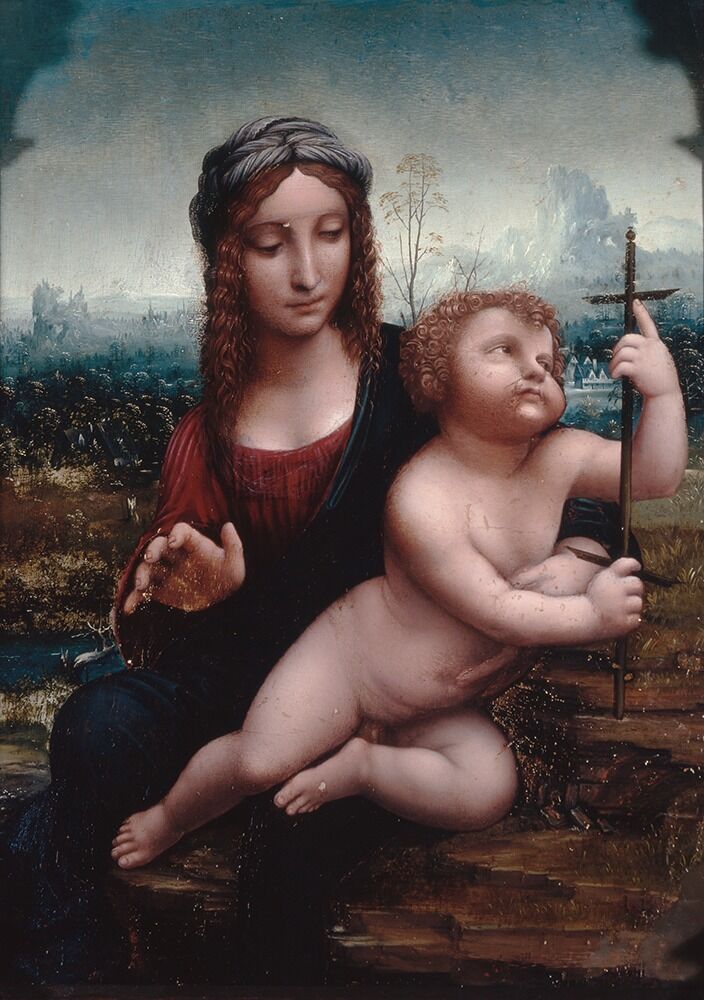 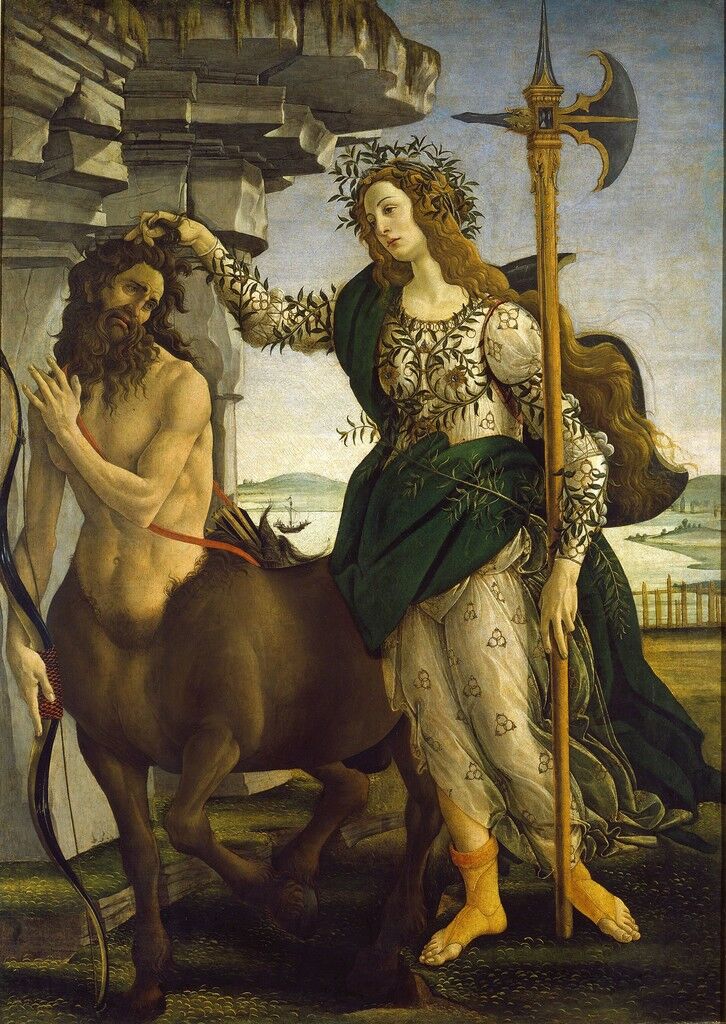 Sandro Botticelli
Pallas and the Centaur, 1482
"Botticelli Reimagined" at Victoria & Albert Museum, London
As the early Renaissance turned high, banker angst expanded beyond Dante’s purgatorio and paradiso to include Machiavelli’s power and politics. With the invention of the Italian bond market, finance, art, and politics became inextricably linked. Instead of taxing the citizenry to fund its affairs, the Florentine government obliged families like the Medici to lend it money at interest. This flipped the lender-debtor power dynamic and gave banker dynasties oligarchic power over church and state. War was debt-financed, and indulgences paid for with frescoes. Princely dynasties like the Medici commissioned great works to stay in the Pope’s good graces and to mythologize their power to rival families, not unlike today’s collectors. This public and private patronage not only propelled the humanist impulse throughout Europe but gave economic viability to the studios of
Michelangelo
,
Leonardo da Vinci
and
Domenico Ghirlandaio
. It was on the payroll of bankers that
Donatello
introduced Western civilization to the nude statue, with his David (c. 1440), and
Sandro Botticelli
produced his lyrical paintings.

In 17th-century Holland, art lost its sacred utility and became a secular consumer good for the new trading class. As trade shifted to the seas, the Dutch economic miracle occurred on the back of two game-changing inventions: the joint stock company and the stock exchange. Perhaps history’s first multinational conglomerate, the Dutch East India Company—with its near-monopoly control over the Asian spice trade—was suddenly tradable by the masses on a secondary stock market. This created a professional class of bankers, burghers, traders, and securities-lawyers…and history’s first middle class of tavern owners, longshoremen, sailors, and stock runners, with a consumptive impulse for genre paintings. Unrestrained by king or church, with access to real money to spend on art, alcohol, sex, and tulips, the new capitalists created a Golden Age indeed.
In the midst of this active market, bankers created new capital sources for artists. Before the paint dried,
Rembrandt van Rijn
and
Jan Lievens
would pledge their paintings as loan collateral to a Baltic merchant named Herman Becker, one of the first art-secured lenders in history. An earlier tradition of patron-artists relationship yielded to taste-driven mass market demand, with artist guilds pumping out uncommissioned Dutch landscapes, still lifes, portraits, and genre scenes. Illiquid burghers, whose capital was tied up in tulips and East-India shares, even used art to pay debts to tavern owners. For a time, art was currency.

Art has always required steady flows of capital, a stable currency, and intellectual disputation. As Kant and Voltaire ushered in the age of reason, art entered an age of institutional order. Paris and London became the art hubs of the 18th and 19th centuries thanks in part to a critical invention: central banking. Institutions like the Bank of England promoted a stable currency by issuing bonds through intermediaries like N.M. Rothschild and Sons, Barings Bank, and Credit Mobilier. These government bonds helped fund not only trade, railroads and war, but also key art institutions like the École des Beaux-Arts, Académie Royale de Peinture et de Sculpture, the Louvre, and the Royal Academy—central players in the salon-jury-critic system that would carry the art market into the 20th century. National debt and monetary stability helped grow industry and expand capital. For a time, the art market became an extension of state-sponsored institutions that catered to the financial class and the aristocracy. But even reason had its limits.
While the juried salons and state academies in France became bloated and bureaucratic, and British art slipped into a Victorian dullness that would last until
Francis Bacon
, a few entrepreneurial art dealers like Ambroise Vollard and Daniel-Henry Kahnweiler created the independent dealer-artist representation model we know today. They provided artists a viable alternative to the state-controlled salons, backed by venture capital from friends and family and short-term lines of credit from Parisian banks. The combination of Left Bank avant-gardism and access to capital made the independent-dealer model an appealing option for genre-busting artists like the
Impressionists
a
n
d
Cubists
, who valued absolute aesthetic freedom over state accolades and prizes. They finally toppled the salon, causing the value of academic realists (the contemporary darlings of the late 19th century) to drop quicker than those zombie formalists flipped at Phillips a few years ago. 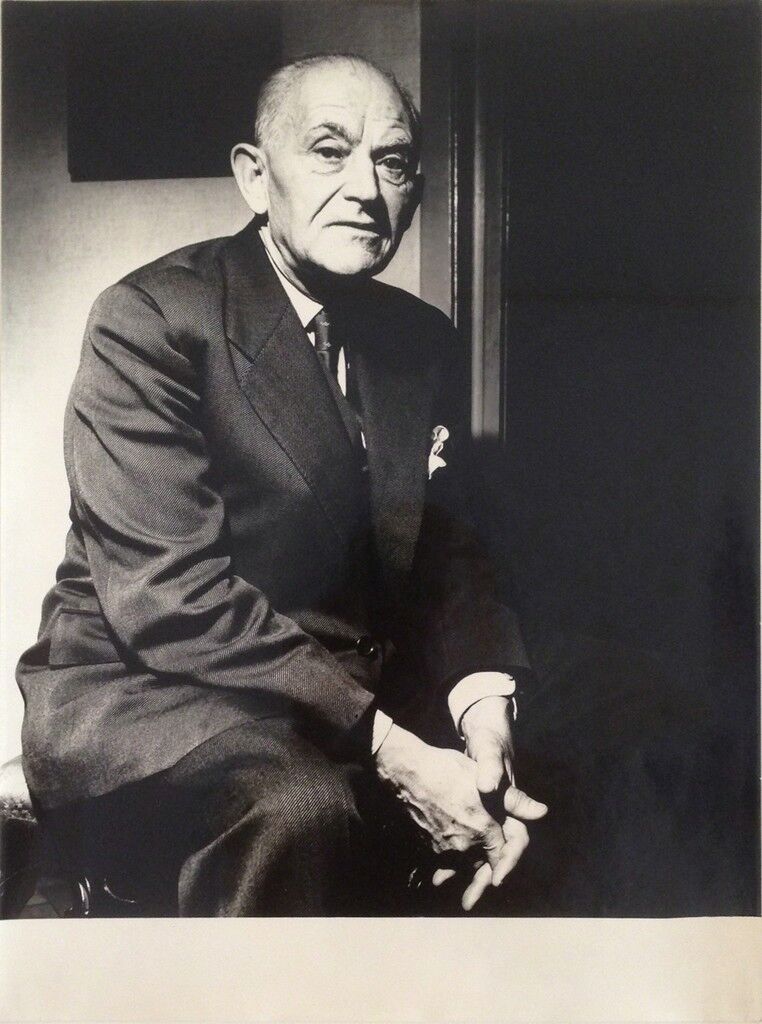 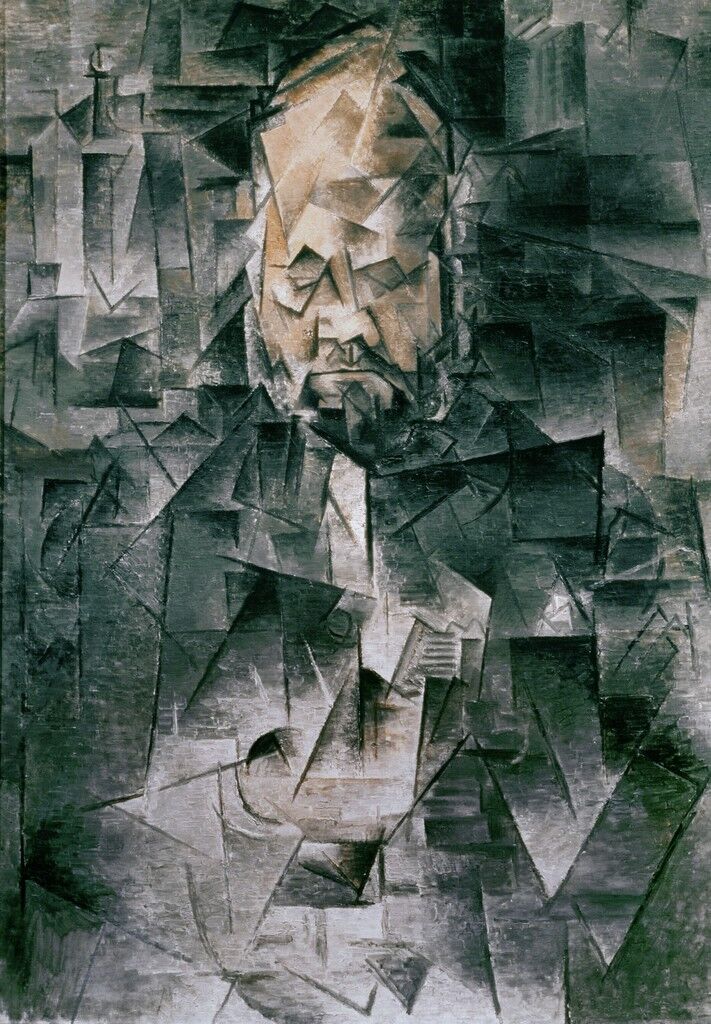 Pablo Picasso
Portrait of Art Dealer Ambroise Vollard (1867-1939), Spring 1910
Pushkin Museum of Fine Arts, Moscow
Advertisement
By 1904, the French banker André Level would at last transform art into pure capital. He raised money from 12 of his banker pals to buy pictures by no-name bohemians like
Henri Matisse
,
Paul Gauguin
, and
Pablo Picasso
, who Level had befriended amidst the intellectual milieu of Paris’s cafes. His investment scheme, dubbed “La Peau de l’Ours (Skin of the Bear)” club, was the first time art was bought purely to generate a return on capital. Ten years on, Level and his syndicate sold the paintings in a dramatic auction at the Hotel Drouot in Paris (still the blueprint for Sotheby’s and Christie’s evening sales). The sale generated a 400% return on their original investment (according to Michael C. Fitzgerald, in his book Making Modernism: Picasso and the Creation of the Market for Twentieth-Century Art)—the first and perhaps last successful art fund. Credit the bankers for finding the masters of early modernism amidst the Montmartre squalor.
Months later a Serbian radical shot Franz Ferdinand…causing art and capital to move west.

The early 20th century saw American financiers became Medici-level rich through a legal entity known as the corporate trust (or, if you asked them, their work ethic—end of story). It was a new and useful device that consolidated industry power in one enterprise, deliver monopolistic returns to a small group of trustees, and sparked the first anti-trust laws. Laws that came too late to impede the stunning wealth accumulation of the Fricks, Morgans, Huntingtons, and the like.
Dealers like Joseph Duveen noticed that “Europe [had] a great deal of art, and America [had] a great deal of money." Art became the primary source of cultural capital for this cluster of ego-driven industrialists whose wealth could buy anything but refinement. Amidst the collapsing scenery of Europe, America’s barons traded capital for class, mostly in the form of
Old Masters
pictures.
When the wars ended, New York stood alone as the center of the art world (remember that art follows capital). Its artists struggled for creative truth in the ’50s, challenged social conventions in the ’60s, and explored conceptual mediums in the ’70s. But it was during the insomniac, disco-lit ’80s that two rather arcane financial developments would come to define today’s art world: leverage finance and securitization.
These concepts revolutionized capital allocation, expanded credit, and laid the foundation for wealth creation (in the form of hedge funds, investment banks, and private equity firms) on a scale that would make a Rothschild blush. Credit-savvy financiers, along with real estate developers, became the most active buyers, a trend that has only intensified over the past two decades. As the leveraged buyout boom got underway in New York and the Japanese were buying Pebble Beach, Rockefeller Center, and
Post-Impressionist
paintings with junk bonds, Generation Leverage started buying art on an industrial scale. In response, auction houses like Sotheby’s launched a financial services division and Citi Private Bank and U.S. Trust began offering art loans. Now when Mr. Hedge Fund Manager or Private Equity Principal buys art, he can unlock 50% of its appraised value at a low cost of capital and deploy the proceeds in other investments…all while keeping the art on the wall. In the 1980s, art became an ATM.
Oscar Wilde might be confused to hear that today, when bankers get together for dinner, they talk about art banking. For the last couple of years I’ve had the good fortune of leading an art division at a private bank, with a very large art loan book. It’s the one type of lending secured by an asset whose value is anchored in philosophical belief, instead of serviceable property (ie, a house, yacht, or car) or a clear stream of cash flows, such as a business or office building. When we unlock capital from art—non-utilitarian pigment on canvas that pays no dividend—we do it with a confidence informed by 700 years of history that capital will continue to chase high culture.
So are the barbarians really at the gate? Of course they are. They always have been.
Evan Beard is the National Art Services Executive at U.S. Trust, Bank of America Private Wealth Management.