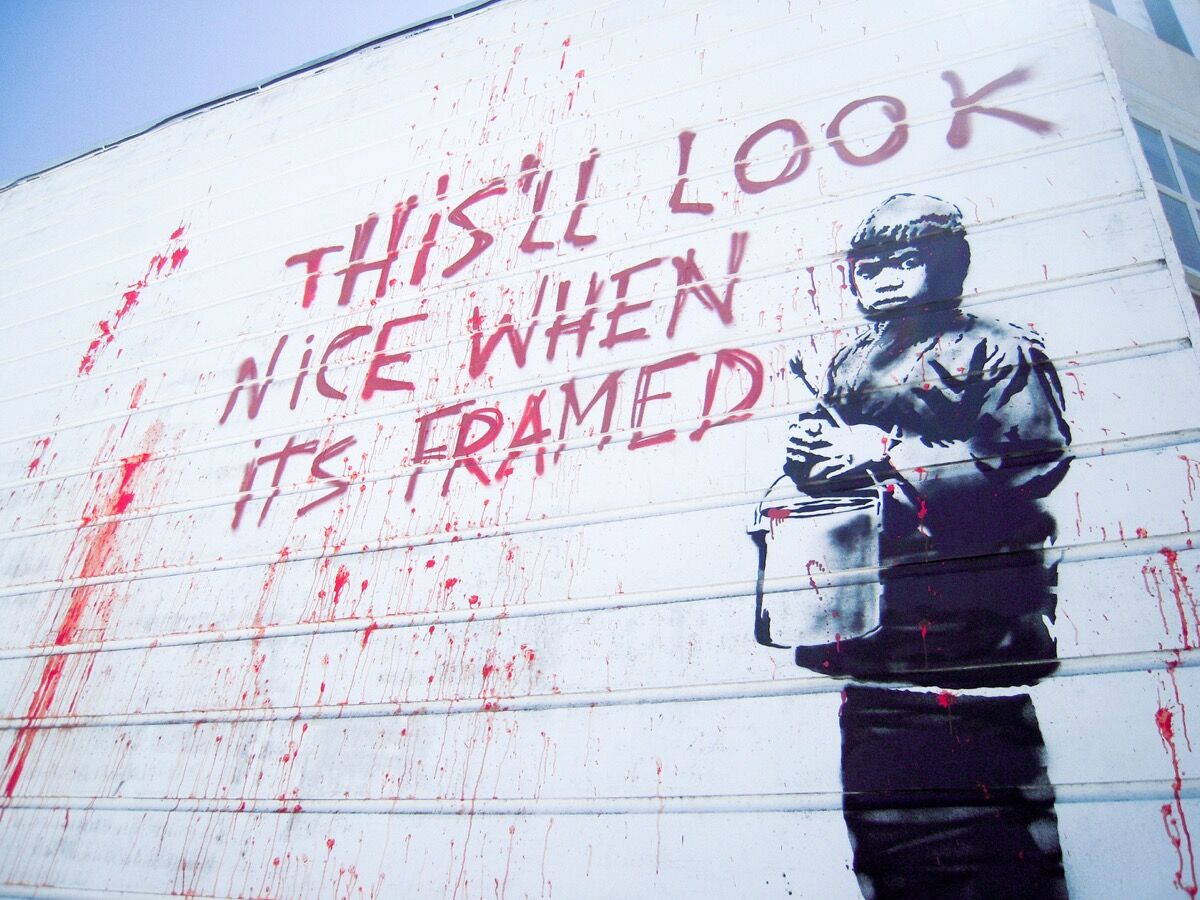 “What would you do if you were offered a small fortune for a painting the artist didn’t want sold?”
This is the thorny moral question that drives the newly released documentary “Saving Banksy.” It follows the saga of one man’s quest to save an iconic graffiti work by the infamous street artist
Banksy
from being whitewashed by the city government or being ripped from the streets and sold at auction. In doing so, the film pulls back the curtain on an issue plaguing many street artists and the integrity of their work: the rampant dislodging and sale of street-art works against the will of artists.
“These pieces show up in galleries and at auction, and the public doesn’t generally know that the artist didn’t intend for them pieces to be sold, or that none of the money is going to the artist,” explains the film’s director, Colin Day, shortly after the film’s release in San Francisco. In addition to raising awareness of the challenges street artists are dealing with, the film also aims to “get people to appreciate street art—in its intended form,” says the film’s executive producer, Brian Greif.
Greif, who is also the story’s protagonist, is a street art collector—albeit a “misguided” one, as the film’s press release admits. His intentions were pure: to remove Banksy’s Haight Street Rat mural from its high perch on the wall of a Victorian hotel in San Francisco in order to rescue it from being whitewashed by the city government. He’d then donate the work, which depicts one of the artist’s signature rats wearing a Che Guevara-style cap and wielding a spray can, to a museum. However, after painstakingly extracting the piece, Greif learns his plan will be impossible to realize. He inadvertently finds himself in the middle of a heated clash between a community of street artists and a group of individuals who remove street art work for personal gain—and being schooled in the complex politics of the sale of street art in the process. 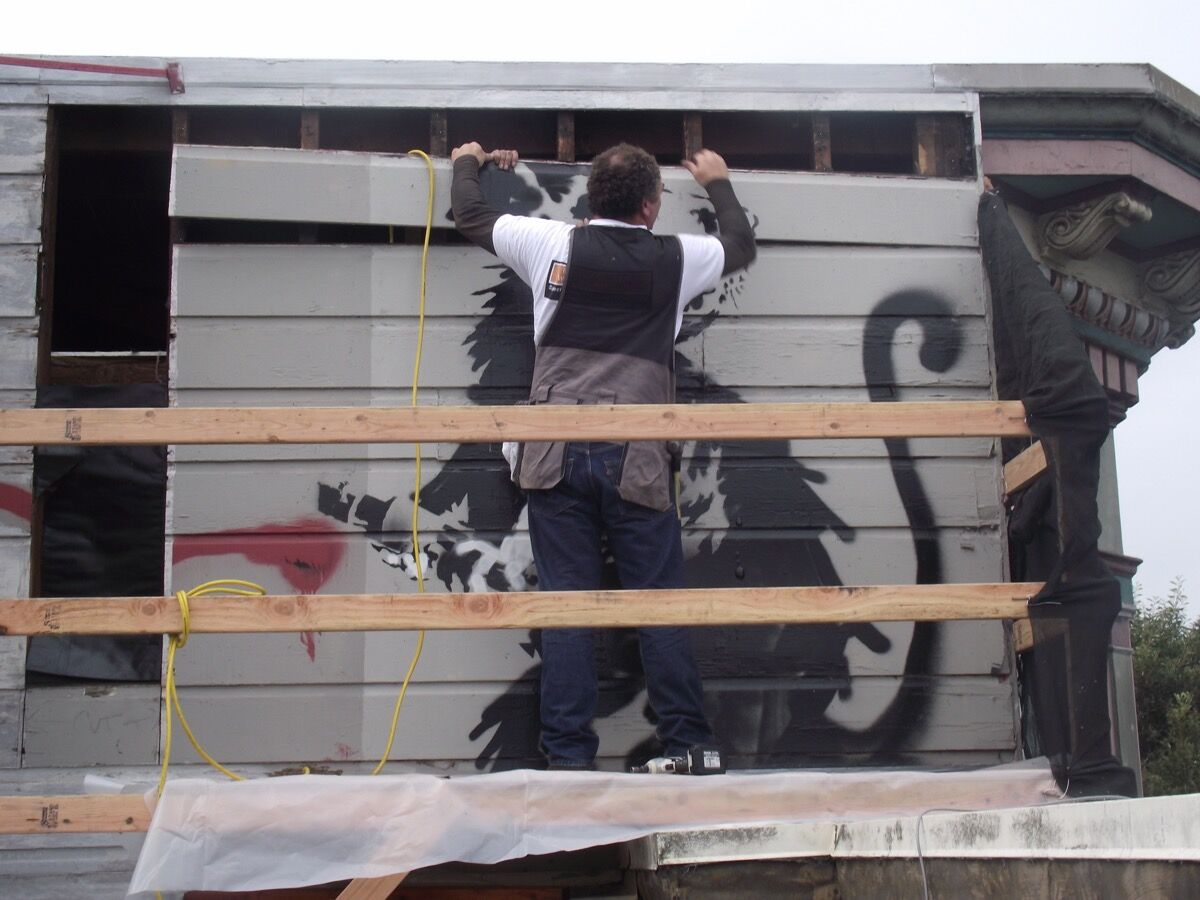 “The thing is, artists like Banksy make pieces in their studios that they designate for sale,” explains Greif. “But the works they’re making on the street aren’t intended to be sold, or even saved.” It’s precisely this question of intent that first thwarts Greif’s plans. In one scene, he offers the painting as a gift to SFMOMA. But while John Zarobell, the museum’s assistant curator at the time, admits it’s a strong piece, he explains that he can’t accept the donation without a note from Banksy approving the removal of the painting and its placement within a museum context.
Zarobell also outlines another requirement by the museum: the delivery of a certificate of authenticity from Banksy himself, to ensure that he created the painting. But while the Haight Street Rat was listed on the artist’s website as an original, Banksy’s studio wouldn’t provide the document. It might seem like an odd decision for an artist to block their work from entering a prominent museum collection. So why would he do it?
As Greif explains, if Banksy were to authorize the work it would set a precedent, “that works intended for the street, after they’re removed, still have value.” And that’s not a precedent, as we learn through the documentary, that artists like Banksy want to support. Day elaborates: “There’s kind of a black market that’s emerged for paintings removed from the street, and artists don’t want to encourage it by legitimizing those paintings.” While selling works uprooted from the streets isn’t technically illegal, the process does pose some serious ethical quandaries. Not only do most street artists disapprove of the removal of their works from their original context, but they also don’t see any of the profit made from the sales.
Stephan Keszler is one of several dealers known for ignoring the intentions of artists like Banksy whose street work he sells. He shows up in one of the film’s more memorable scenes—showing a series of Banksy street paintings he maintains “aren’t for sale” at a 2012 Miami art fair. The presentation includes the Haight Street Rat, which Greif had lent in frustration after his unsuccessful attempts to return the work to a public context. However, Grief begins to regret his decision the moment he sees the work on the wall of the fair: “I don’t know how I feel about this. It’s like when you see a deer in the wild, it’s cool, but when you see a deer’s head on the wall, it’s not so cool.”
To confuse matters further, Greif’s piece is hung alongside two works that were originally stenciled by Banksy on a wall separating Palestine and Israel. The artist placed them there, as artist Glen E. Friedman points out in the film, in an attempt to “make a positive impact” in the wartorn region. Friedman goes on to express a frustration shared by numerous artists across the film, when “some fucking asshole takes the shit off the wall and tries to sell it to someone. What sense does that make?” Street artist
Ben Eine
, a friend of Banksy who accompanied him on the trip to Palestine, echoes the sentiment, referring to Keszler in particular: “In the street-art world he’s considered a shyster, a villain.” 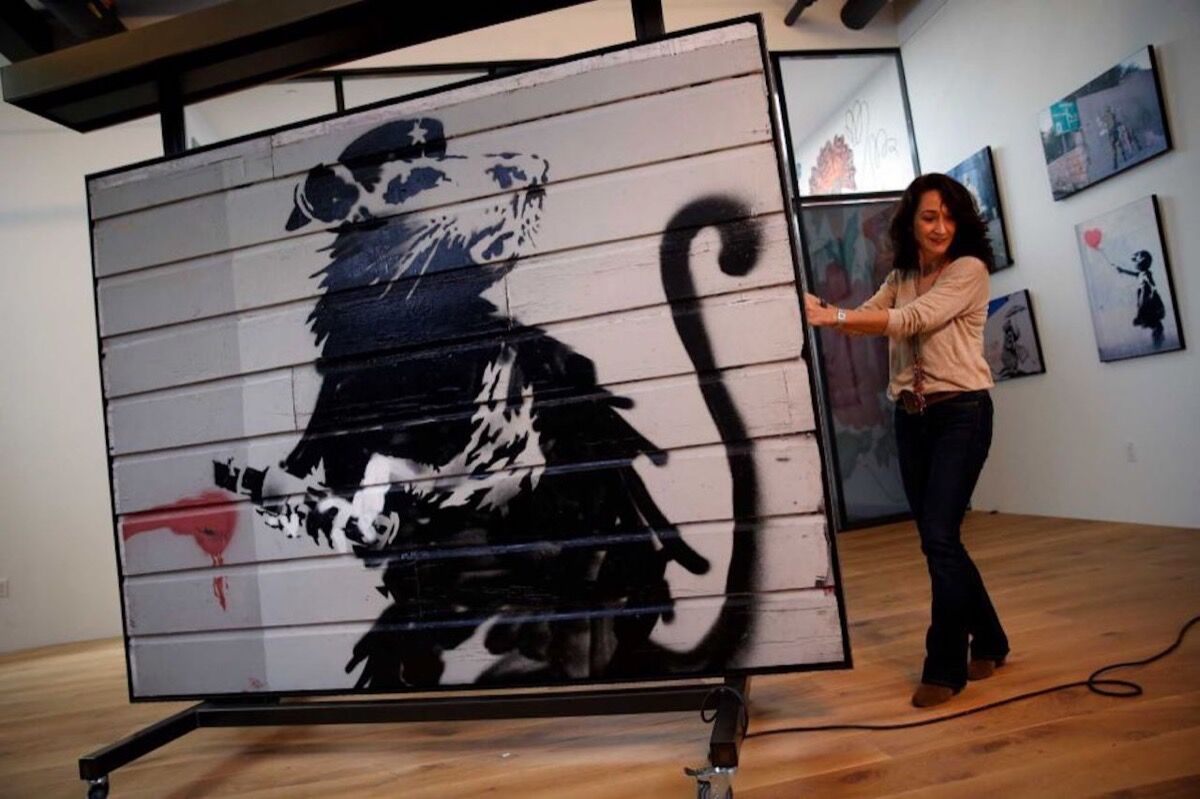 Advertisement
After the fair closes its doors, Keszler ends up selling all of the works he presented—except Greif’s. Despite receiving a $500,000 offer from the dealer, which is a significantly higher figure than those typically drawn by similar works authenticated by Banksy selling at major auctions, Greif stayed true to his pledge to return the work to the public.
These days, Greif still struggles to find public platforms to exhibit Haight Street Rat, but he’ll never sell it. Like Banksy and a dedicated community of street artists, Greif refuses to fuel the market for paintings pulled from the streets. But beyond refusing to engage with operations like Keszler’s, a big question remains: how can activity of this sort be quelled? “Well, it’s a hard question,” Greif says. “If a piece is painted illegally, without the owner of the building’s or the city’s permission, there’s not much that can be done. The building owner legally owns the painting and can do whatever they want with it.” And that might mean selling it to a dealer like Keszler to make a quick buck, or more.
“Again, many of these people removing the works and the collectors buying them don’t know the damage they might be doing to an artist’s career or the work’s integrity,” Greif concludes. “So that’s why we made this film—to inspire more respect for this work, the artists who make it, and their wishes.” As “Saving Banksy” kicks off its tour, Greif and Day are hopeful that their goals, this time around, will become a reality.
Alexxa Gotthardt
Related Stories