How Barbara Hepworth Became a Modern Master of Sculpture 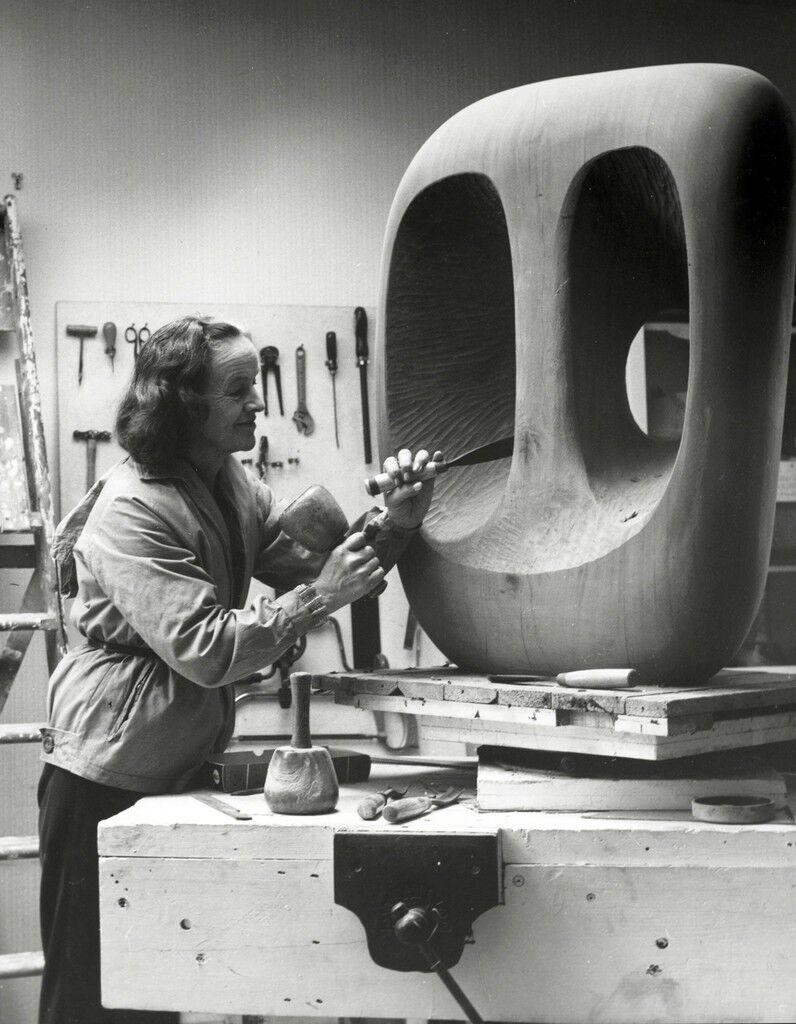 Barbara Hepworth
Barbara Hepworth in the Palais studio at work on the wood carving Hollow Form with White Interior, 1963
"Barbara Hepworth: Sculpture for a Modern World" at Tate Britain, London
Barbara Hepworth
’s greatest legacy may be an absence. In 1932, the British sculptor completed Pierced Form, her first sculpture with a hole at its center. The pink alabaster, vaguely star-shaped artwork, which was destroyed during World War II, featured a smooth, waving surface that caught light on its soft edges. A generous aperture punctured its belly, creating a short, dark tunnel through which the viewer could see whatever lay beyond. Throughout her career, Hepworth continued to make sculptures with such gaping wounds, or openings, which elicit tensions between presence and absence and the interplay of art and life.
Hepworth’s abstract forms led her to become a key figure in the history of modernism. She continued to sculpt until her 1975 death, fighting for a hard-won position in the canon that few of her female peers achieved. Today, her sculptures find echoes in generations of work that followed, from the biomorphic spires and bumps of
Louise Bourgeois
to the haunting white bodies of
Thomas Houseago
. Throughout her life, Hepworth associated with a coterie of European luminaries including
Piet Mondrian
,
Walter Gropius
, Constantin Brancusi, and her greatest rival,
Henry Moore
. Yet Hepworth’s legacy casts a unique shadow, making her one of the most crucial 20th-century artists to elicit ideas about the body and the world around us with expertly executed, pared-down forms. 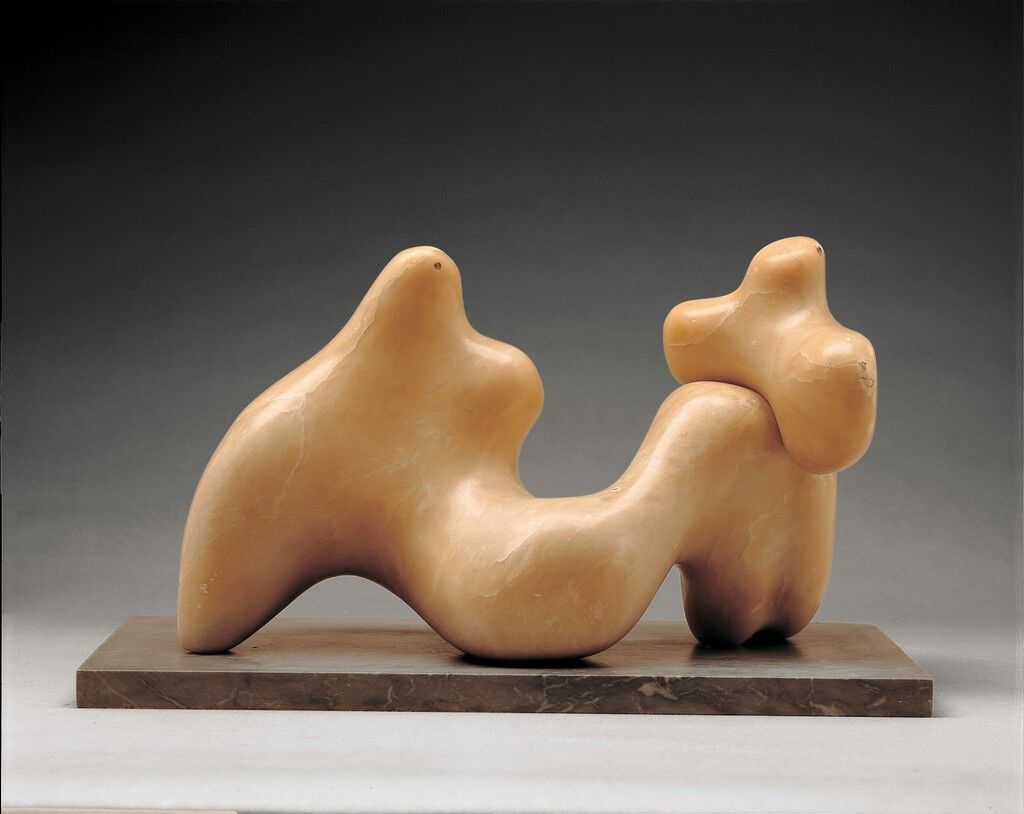 Barbara Hepworth
Large and Small Form, 1934
"Barbara Hepworth: Sculpture for a Modern World" at Tate Britain, London
Hepworth was born in Wakefield, Yorkshire, in 1903 and showed early artistic promise. After expressing interest in Egyptian sculpture, an instructor encouraged her to apply for a scholarship to the Leeds School of Art. The Northern England landscape of her childhood and early art education would be inspirations for the rest of her life.
After leaving Leeds, Hepworth attended London’s Royal College of Art in 1921. Yet it wasn’t until a trip to Italy, in 1924, that Hepworth learned to carve stone. She credited Italian sculptor Giovanni Ardini as a particular inspiration during her time outside of the U.K. While living abroad, Hepworth married fellow sculptor John Skeaping. 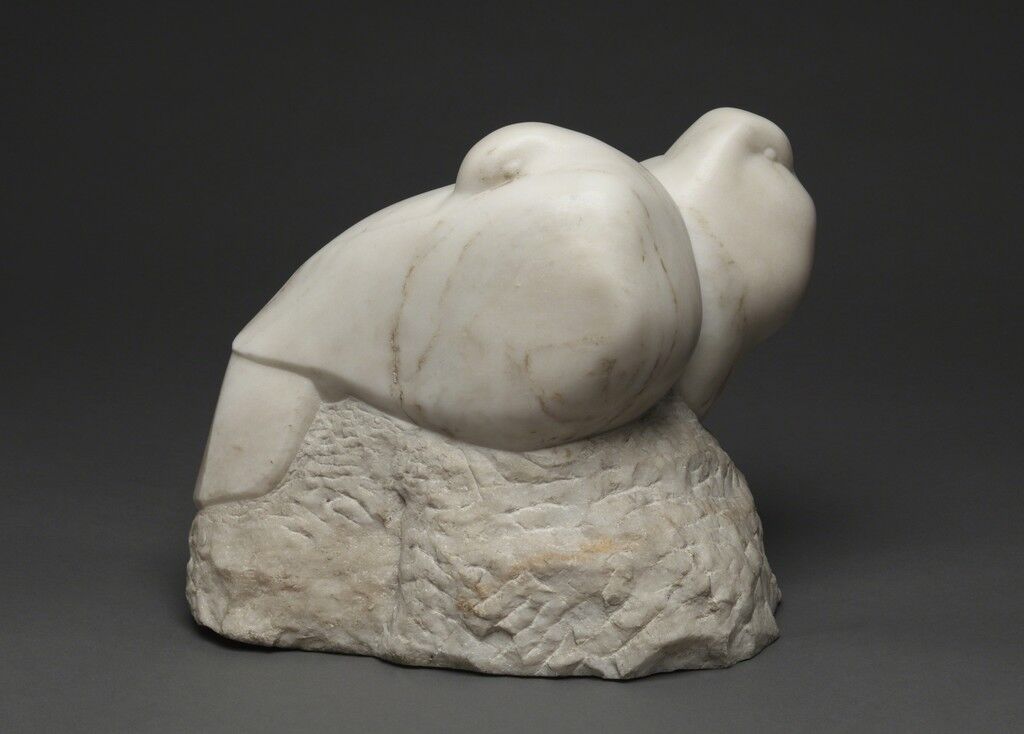 Barbara Hepworth
Doves (Group), 1927
"Barbara Hepworth: Sculpture for a Modern World" at Tate Britain, London
Advertisement
The newlyweds moved back to London in 1926, working then in the modern “direct carving” mode. This manner of sculpting required artists to engage directly with their materials, using a hammer and chisel. In the past, artists had created small models that their workshops recreated on a larger scale. The new direct carving method, in keeping with larger modernist goals, emphasized the artist’s hand, gesture, and individuality.
Throughout the late 1920s, Hepworth sculpted forms including an infant (she gave birth to her first child in 1929), a mask, a torso, and a child curling into a mother. The figure remained a key interest for Hepworth, even as she veered into abstraction years later. Her other great motif, landscape, became a more prominent element of her practice throughout the 1940s: The sea surrounding Britain inspired her three-dimensional meditations on waves. 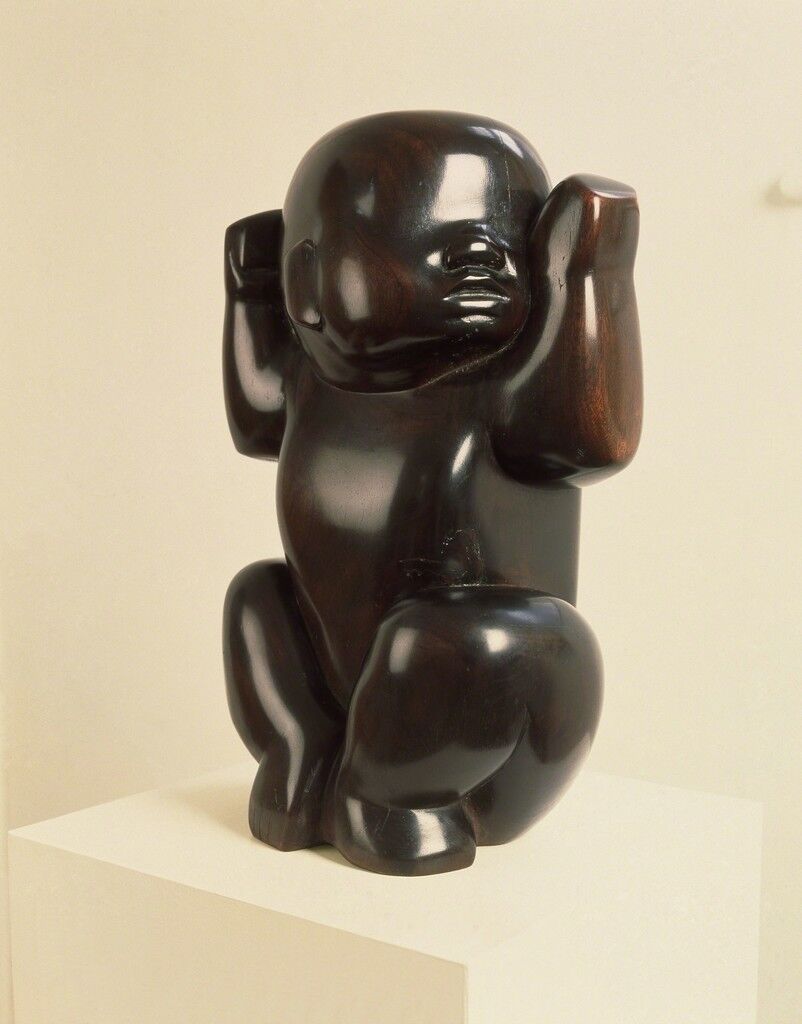 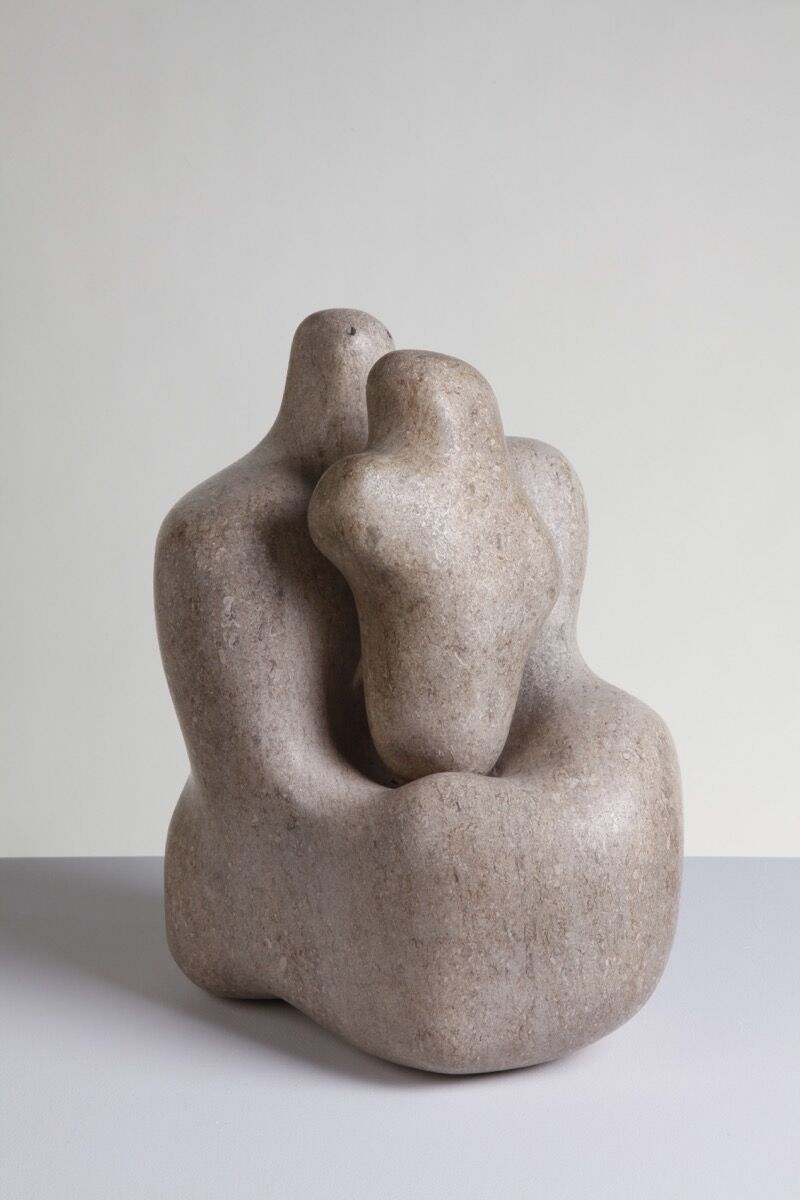 In the early 1930s, Hepworth separated from Skeaping and “pierced” a sculpture for the first time—Pierced Form (1932). She returned to the mother-and-child motif in 1934 with a new Cumberland alabaster sculpture. Titled Mother and Child, the piece undulated in a fresh, abstract manner and featured a hole between the larger, reclining maternal form and the small figure on her knee. Such negative space was both visually and conceptually intriguing: A literal gap, or absence between mother and child, became fraught with meaning.
Hepworth’s hole, wrote Alden Whitman his New York Times obituary for the artist, gave “the figure a sense of flow” and led “the viewer’s eye around it.” In an essay for the Tate, novelist Jeanette Winterson wrote: “Hole turned out to be spelt with a W as well as an H. Holes were not gaps, they were connections. Hepworth made the hole into a connection between different expressions of form, and she made space into his own form.” Just as she harnessed stone, Hepworth harnessed weightless space as a material itself. 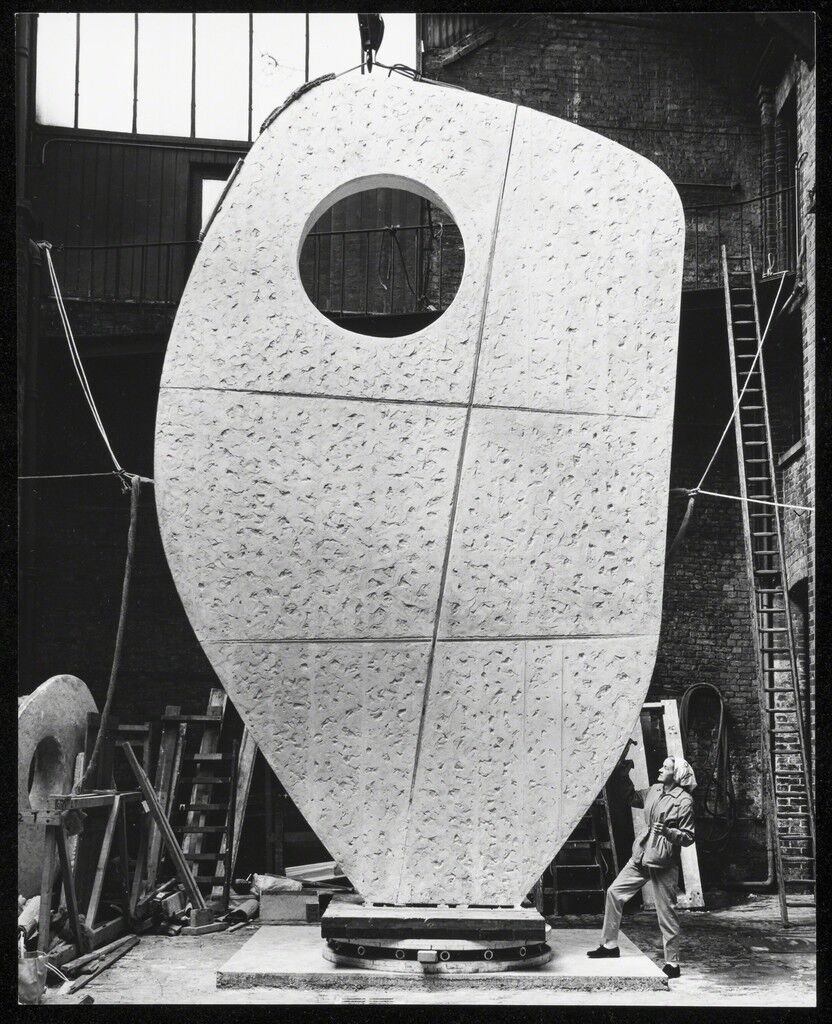 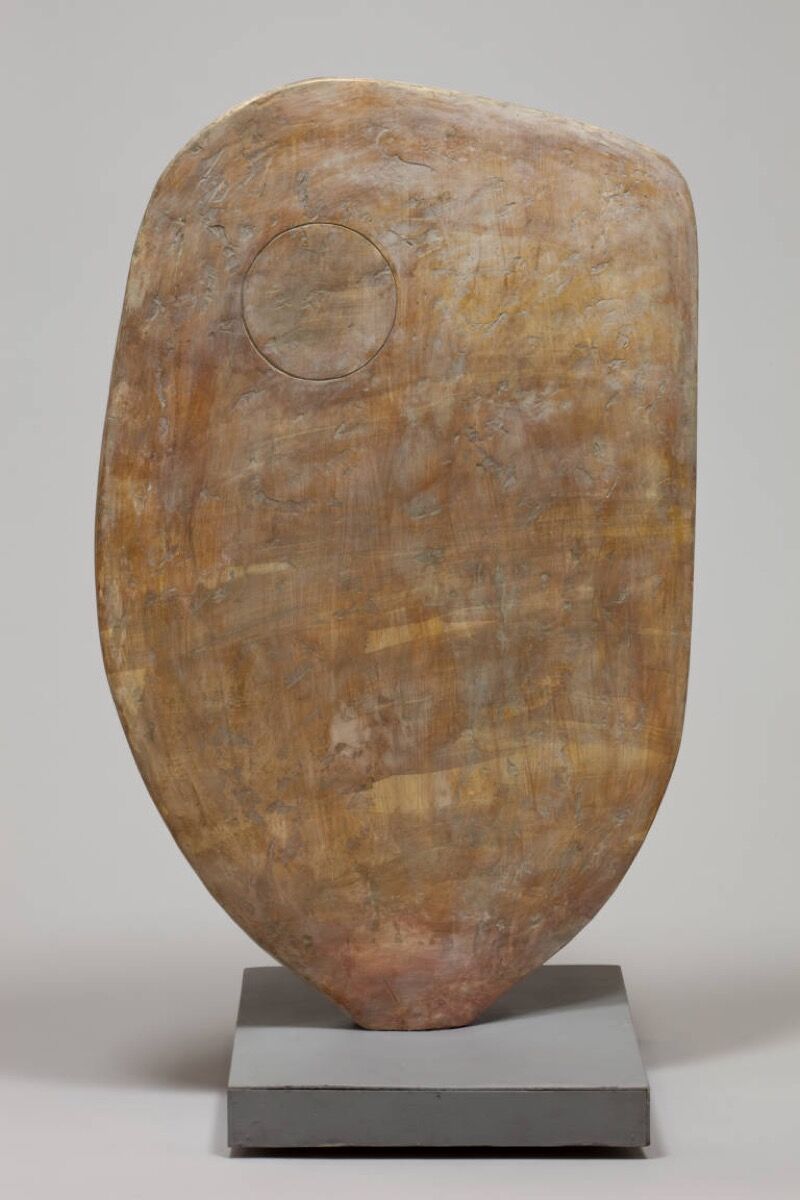 The sculptor was adventurous with her materials. Throughout her career—during which she made an estimated 500 sculptures—Hepworth worked with gray alabaster, Serravezza marble, silver, Burmese wood, limestone, and bronze. In addition to metal and rock, Hepworth also used strings, an element that added a sense of delicacy and suggested musical instruments. Hepworth experimented with scale as she took public commissions for the 1951 Festival of Britain (Turning Forms, 1950) and the United Nations (Single Form, 1961-4). She seemed to be constantly challenging herself.
Together with painter
Ben Nicholson
, whom she married in 1938, Hepworth began showing with the Seven and Five Society. Through joining this group of British artists, which included Henry Moore, Hepworth positioned herself at the center of her country’s art world. 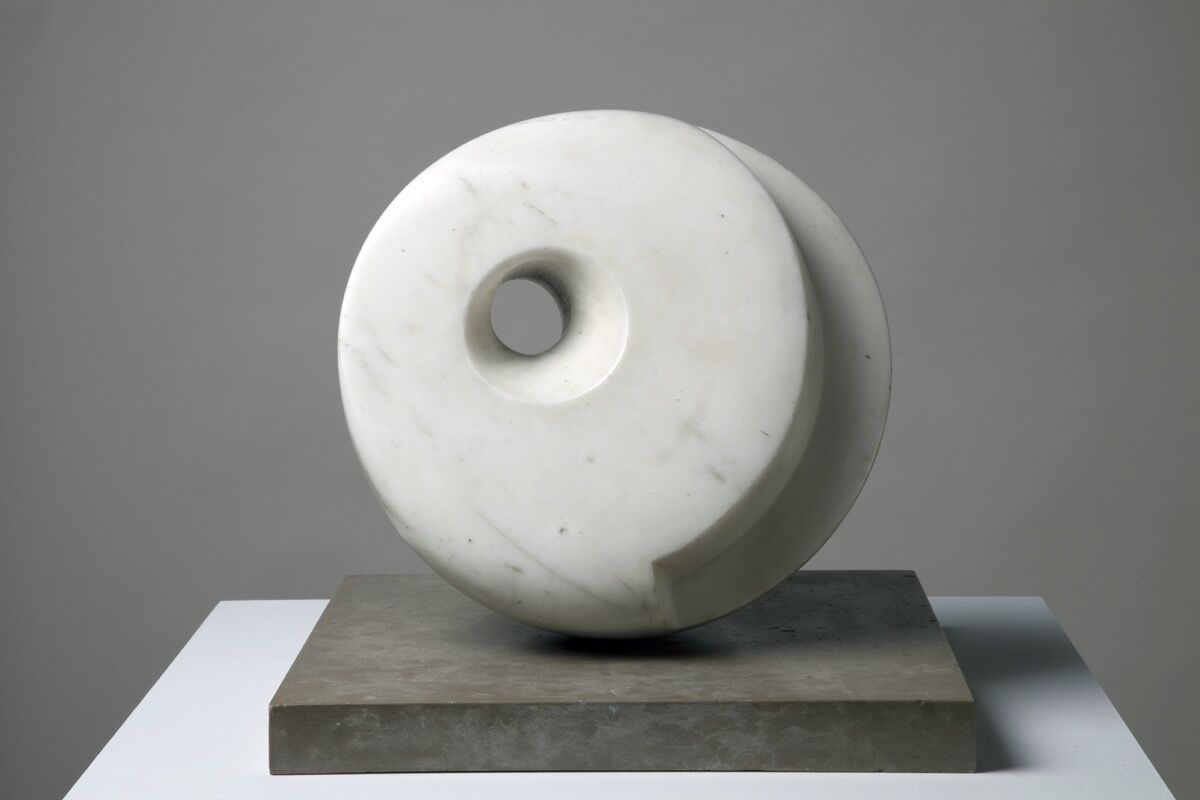 Throughout the 1930s, Hepworth traveled through France and met Brancusi and
Pablo Picasso
. Artist
Auguste Herbin
invited her to exhibit with the Parisian Abstraction-Création group, which included famed modernists including Mondrian and
Wassily Kandinsky
. Such a show helped connect Hepworth to the continental art scene. And she also impressed the art world across the Atlantic: The Museum of Modern Art purchased its first Hepworth sculpture in 1936.
As World War II broke out in 1939, Hepworth and Nicholson relocated with their triplets to coastal Cornwall, in the southern region of the U.K. Bombing destroyed Hepworth’s work at her Mall studio in Hampstead (north London), and the artist turned to drawing as her new working conditions didn’t support creating sculpture. Despite the upheaval, Hepworth’s reputation held. She enjoyed a smattering of gallery and institutional shows, receiving her first retrospective in 1943 at Temple Newsam in Leeds. 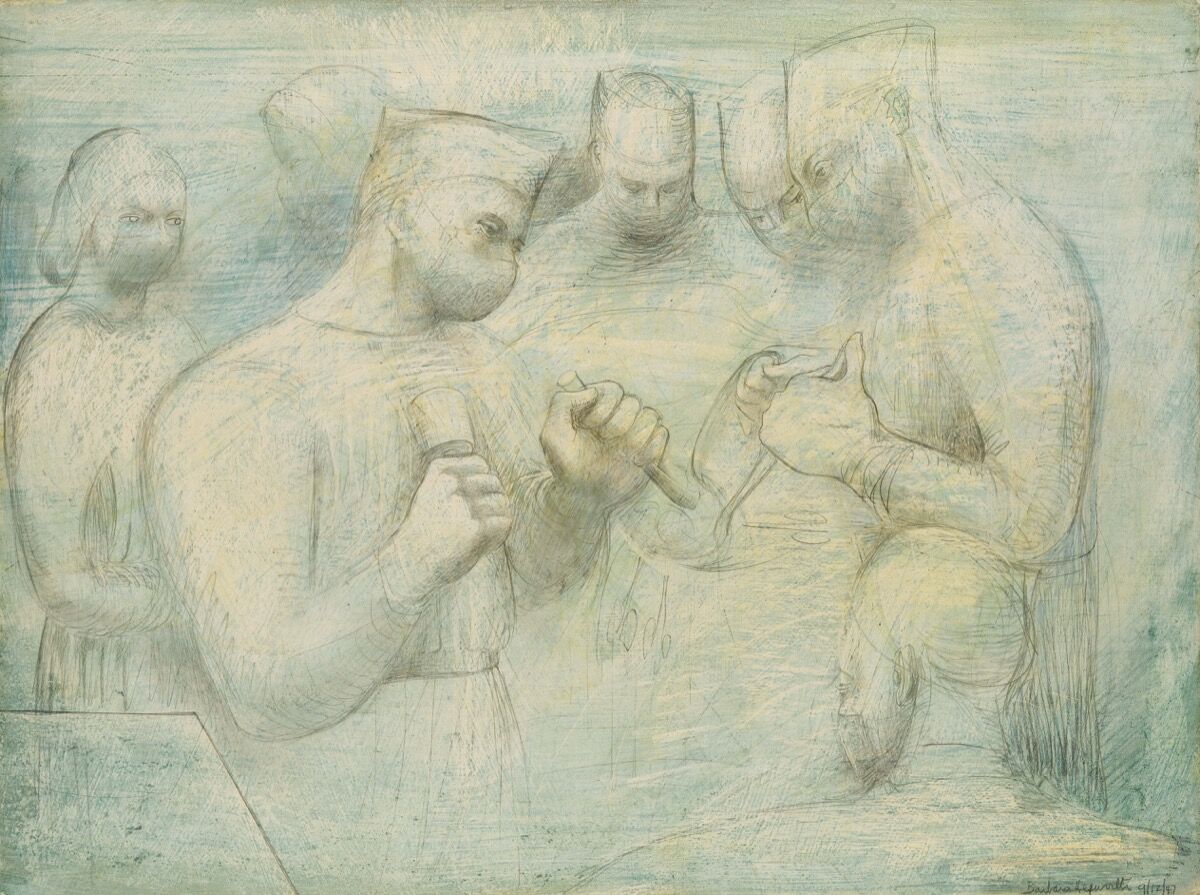 In 1947, two years after the war ended, she initiated her lauded series “Hospital Drawings” (1947–49), which features surgical procedures. Filled with light, color, and soft pencil marks, they offer an antidote to
Thomas Eakins
’s famous, gory Gross Clinic (1875).
Hepworth enjoyed major acclaim towards the end of her life. In 1965, she became a dame and the Tate’s first female trustee. Three years later, the preeminent museum granted her a major retrospective.
While Hepworth continued to sculpt, her body was breaking down. She was afflicted with tongue cancer and suffered from mobility problems. In 1975, she fell asleep while smoking a cigarette at her Trewyn studio in St Ives. The building burned, and Hepworth died inside. 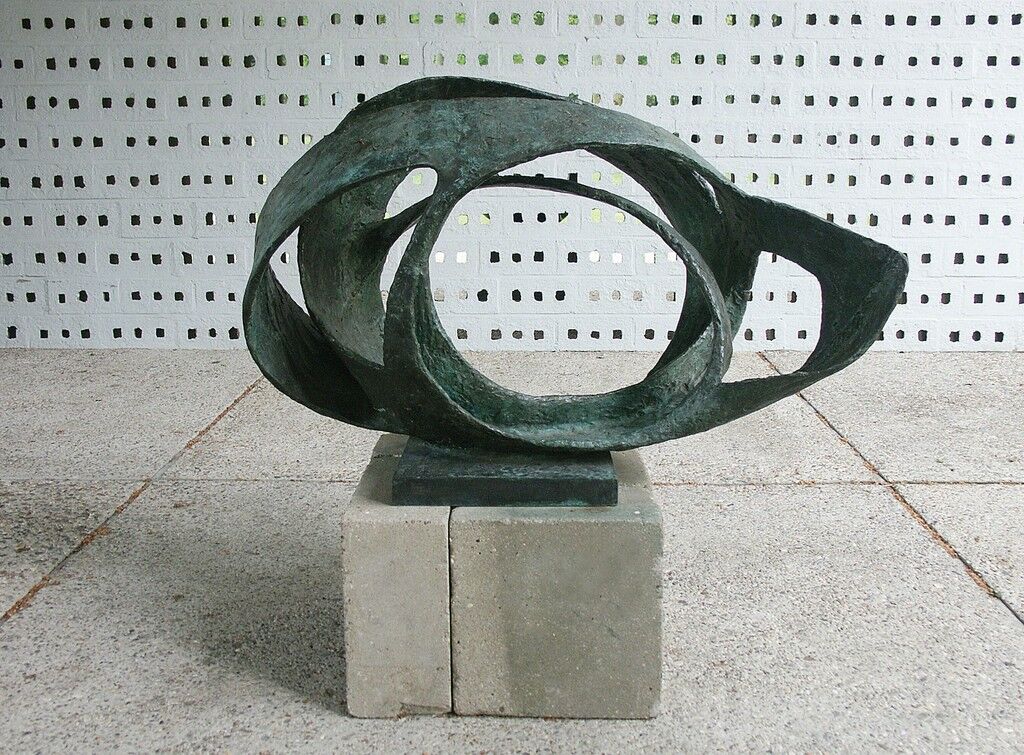 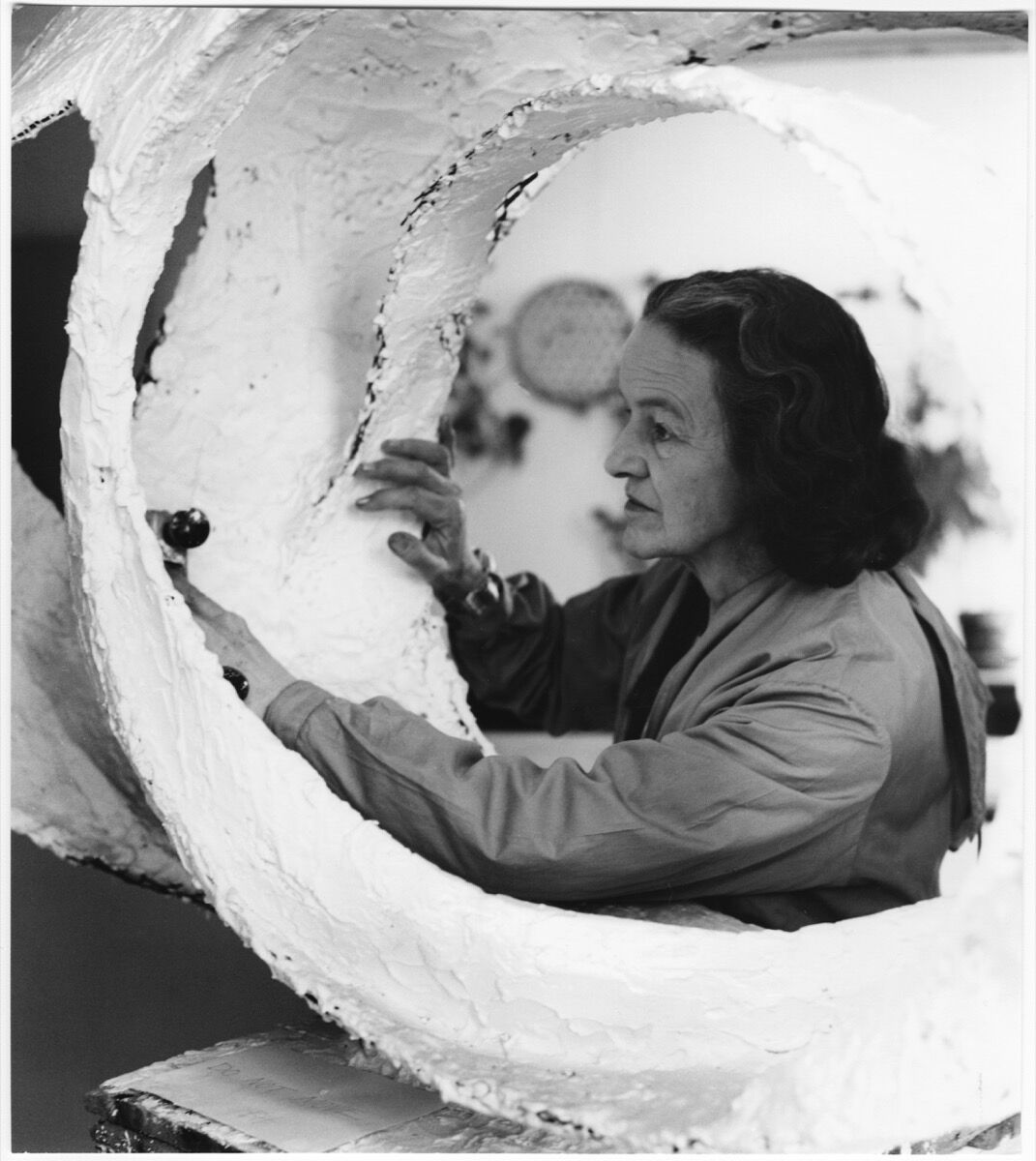 Barbara Hepworth at work on the plaster for Oval Form (“Trezion”), 1963. Photo by Val Wilmer. © Bowness, Hepworth Estate. Courtesy of the Hepworth Wakefield.

“Hepworth was small and intense in appearance, deeply reserved in character,” Sir Alan Bowness, Hepworth’s son-in-law and an art historian, has written. “It was always surprising that an apparently frail woman could undertake such demanding physical work but she had great toughness and integrity.” Hepworth exhibited this force outside her studio, as well, infiltrating art circles that constituted mostly men.
While she never espoused a feminist platform, Hepworth’s sculptures speak for themselves. They advocate for the potency of negative space and radically interpret one of Western art’s perennial subjects, the
Madonna and Child
.
Whitman called her piercing gesture “a flash of daring.” For Hepworth, sculpture could encompass all life had to offer. “Sculpture is a three-dimensional projection of primitive feeling,” Whitman quoted her saying. “Touch, texture, size and scale, hardness and warmth, evocation and compulsion to move, live and love.”
Alina Cohen
Related Stories