This month, Mary Boone Gallery is showcasing 14
Barbara Kruger
artworks that are all celebrating their 40th anniversary. The show is an invitation to reflect on what’s changed—and what hasn’t—across American politics since 1978.
Eerily, one entitled Untitled (Body) (1978) looks like it could have been made this year. In a single silver frame, a 19-by-96-inch strip features an oblique, four-part narrative. Together, its pictures and words suggest a vague, bleak narrative—a woman battered or raped, disbelieved, or faulted (or all of the above).
First, a pink-tinged photograph of a box of tongue depressors on the edge of a table; a curtain rippling in the background; a hospital, probably, or a doctor’s office. Second, text that reads: “The manipulation of the object / The blaming of the victim / The accusation of hysteria / The making mute.” Third, a black-and-white illustration of a man raising his hand threateningly toward a woman who leans back, away from him. Fourth, the simple phrase: “No don’t.”

Untitled (Body) presages much of the language we’ve used this past year when discussing #MeToo, Christine Blasey Ford, and an avalanche of other stories about consent and gender equity. Kruger’s an artist, not a wizard: If she couldn’t divine the future back in 1978, she did capture larger cultural questions in her art before they found their full expression in the mainstream media.
The most chilling work in the show, perhaps, is another work from the same series. Across a similar four-part structure, we see a photograph of a trash can and an illustration of half a child’s face, flanked by two masked adults—doctors, the viewer assumes. In between these images, a block of text reads: “The technology of early death / The providing of consumer goods to a dying populace / The manufacture of plague / The denial of epidemic.”
It’s difficult to look at the work without thinking of President Ronald Reagan’s infamous refusal to acknowledge the AIDS crisis throughout the 1980s. Yet Kruger created the piece years before doctors even had a name for HIV or AIDS. The New York Times didn’t report on the newly discovered illness until around 1981, when it headlined an article “Rare Cancer Seen in 41 Homosexuals.” The following year, the Center for Disease Control and Prevention used the term “AIDS” for the first time. But in the late 1970s, Kruger had already captured, perhaps, the end of a decadent era and a sense of impending crisis. 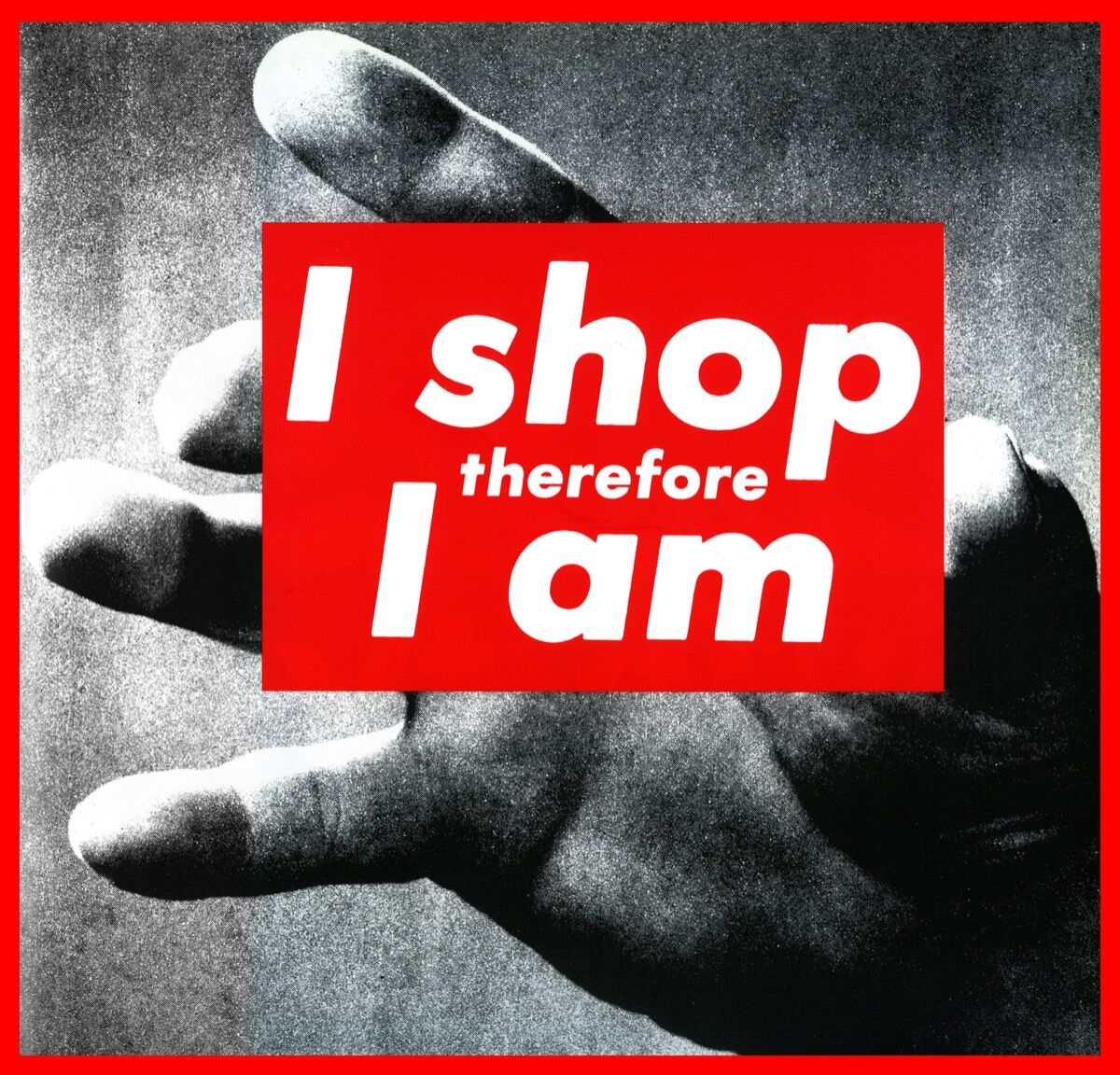 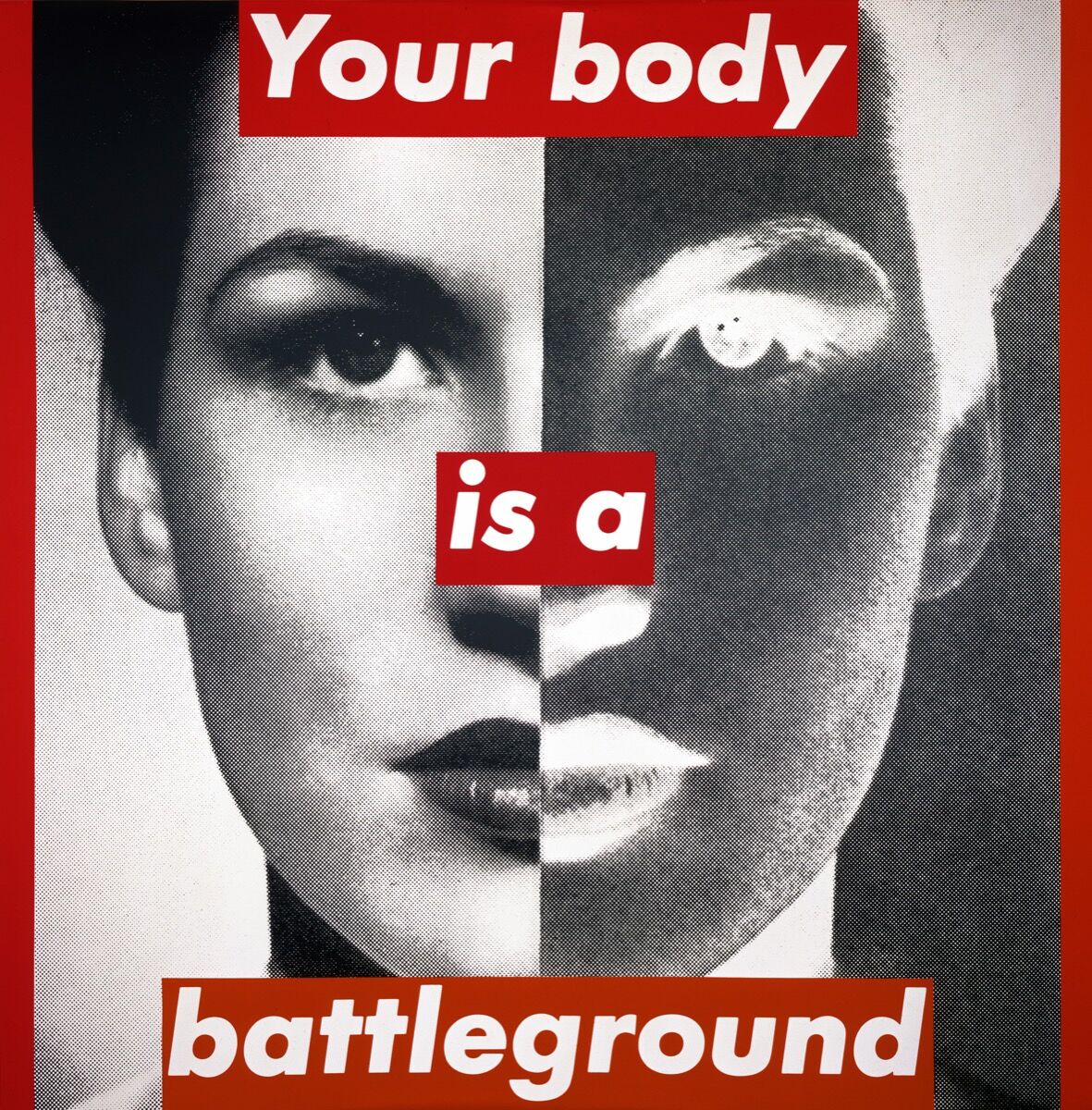 Advertisement
Notably, the “Untitled (Body)” series at Mary Boone diverges from the aesthetic Kruger is best known for today. The artist is inevitably associated with her stark black, white, and red silkscreens that merge found imagery with phrases rendered in bold Futura typeface. In iconic works such as Untitled (I shop therefore I am) (1987) and Untitled (Your body is a battleground) (1989), Kruger ironically condemned consumer consumer culture and American society’s treatment of women.
Notably, Kruger made the latter work for a 1989 Women’s March on Washington (sound familiar?). The participants were protesting then-president George H.W. Bush’s opposition to the 1973 Roe v. Wade decision that had made abortion legal nationwide. Yet this is a rare instance of Kruger making art specifically for a cause. “I never say I do political art. Nor do I do feminist art. I’m a woman who’s a feminist, who makes art,” Kruger told Christopher Bollen in a 2013 conversation for Interview magazine. “My work has always been about power and control and bodies and money and all that kind of stuff.”

Unlike campaign slogans or protest posters, Kruger’s art leaves room for ambiguity. The 1978 works at Mary Boone create partial narratives that leave the viewer to fill in the rest of the story. Take, for instance, another version of Untitled (Body): In the photograph, an empty cup hovers on a ledge. The accompanying text reads: “The technology of disposability / The appearance of stucco / The diving board as metaphor / The appreciation of athletic prowess,” followed by a black-and-white image of a man face-down in water. The final frame simply features the word “wait.” Did this man drown himself because of societal and economic pressures? What was he waiting for? The ledge shares a confounding resonance with the word “diving board”; both convey a sense of danger or anticipation—but of what?
While different in style, Kruger’s 1978 works are part of her larger conceptual endeavors. Throughout her career, she’s appropriated text and imagery, or taken it from existing sources, to create new associations and ideas. Though Kruger rejects the term “political art,” it’s impossible to look at the Mary Boone show without sensing deep convictions about the state of America. Her project isn’t bound to a particular time or issue. Instead, her juxtapositions of pictures and words generate new perspectives on the language and images we’re sold everyday—by the media, advertisements, corporations, and the government. As technology allows for ever-greater pictorial and informational bombardment, Kruger’s work only becomes more relevant.
Alina Cohen
Related Stories 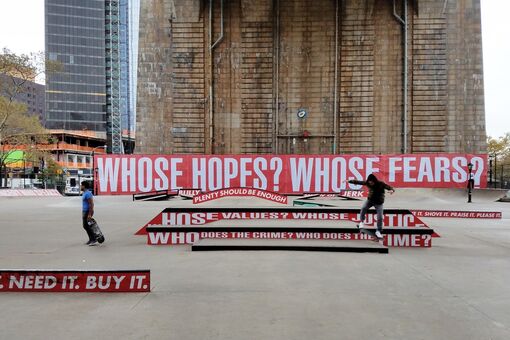