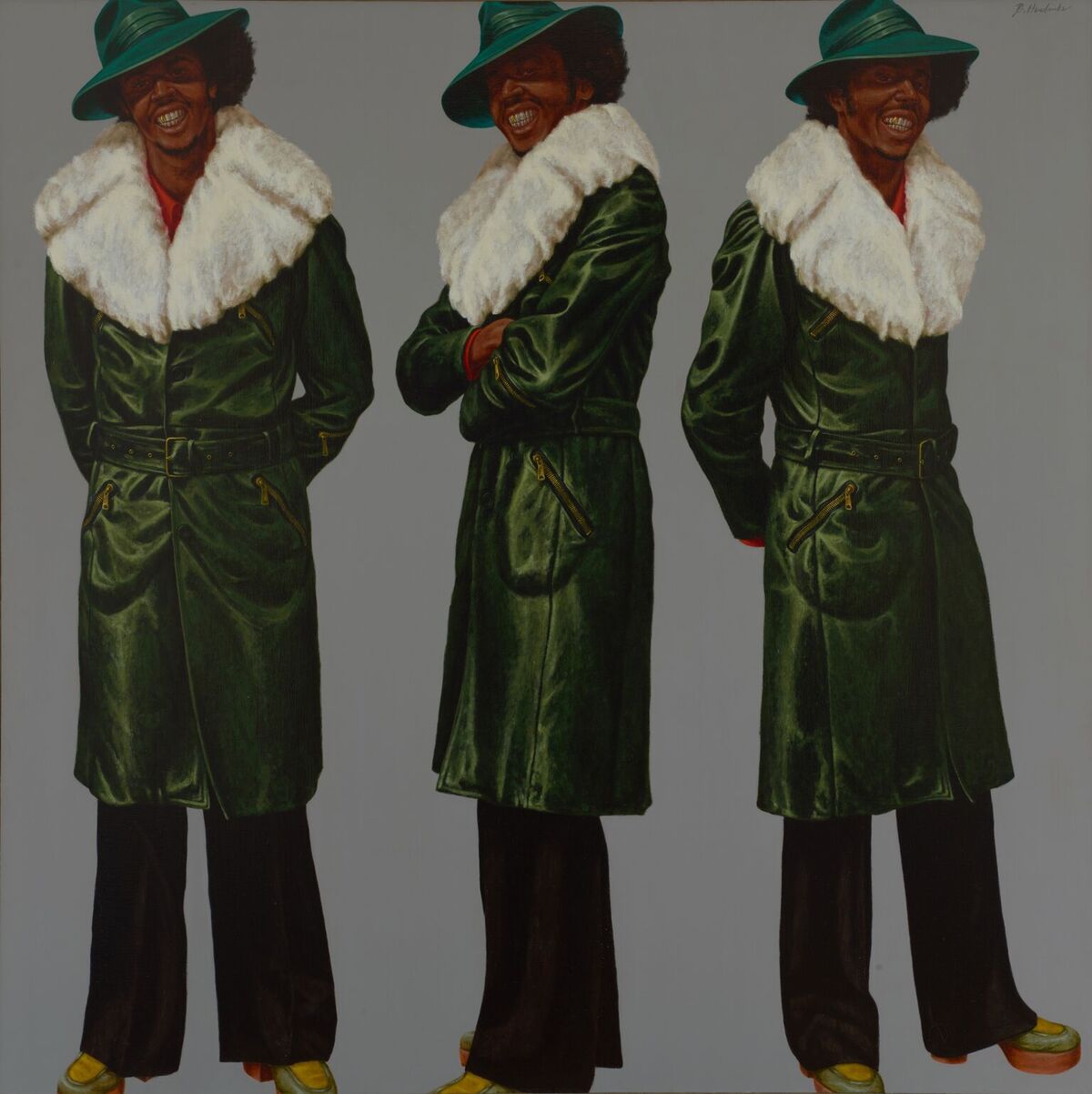 Earlier this year, the great American portrait painter
Barkley L. Hendricks
died at the age of 72. The news was particularly devastating because Hendricks had just returned to portraiture after a long, two-decade break from painting stylish black men and women in ways the art world had never seen before. He was even set to exhibit new works at this fall’s “Prospect.4: The Lotus In Spite of the Swamp.” (The New Orleans-based triennial will now be showing his work from the 1970s.)
His sudden death has produced a yearning among many to see more of his art and measure his legacy. That’s why the Bowdoin College Museum of Art curator, Joachim Homann, decided to convince two private collectors to lend the museum five paintings by Hendricks, four of which have never been seen publicly before, for a tribute show at the museum titled “Barkley Hendricks: ‘Let’s Make Some History.’”
Born in 1945 in North Philadelphia, Hendricks embarked on a formative trip to Europe in 1966 as a student at Pennsylvania Academy of the Fine Arts. (He would later receive his undergraduate degree and a Masters of Fine Arts in painting from Yale University.) During that trip, a slew of
Old Master
and early Modern paintings in European museums made a strong impression on the young artist.
But before
Anthony van Dyck
,
Diego Velázquez
, and
Paul Cézanne
, he had encountered Nina Simone and Miles Davis and the audiences they played to. Hendricks once called Davis “the epitome of being cool.” 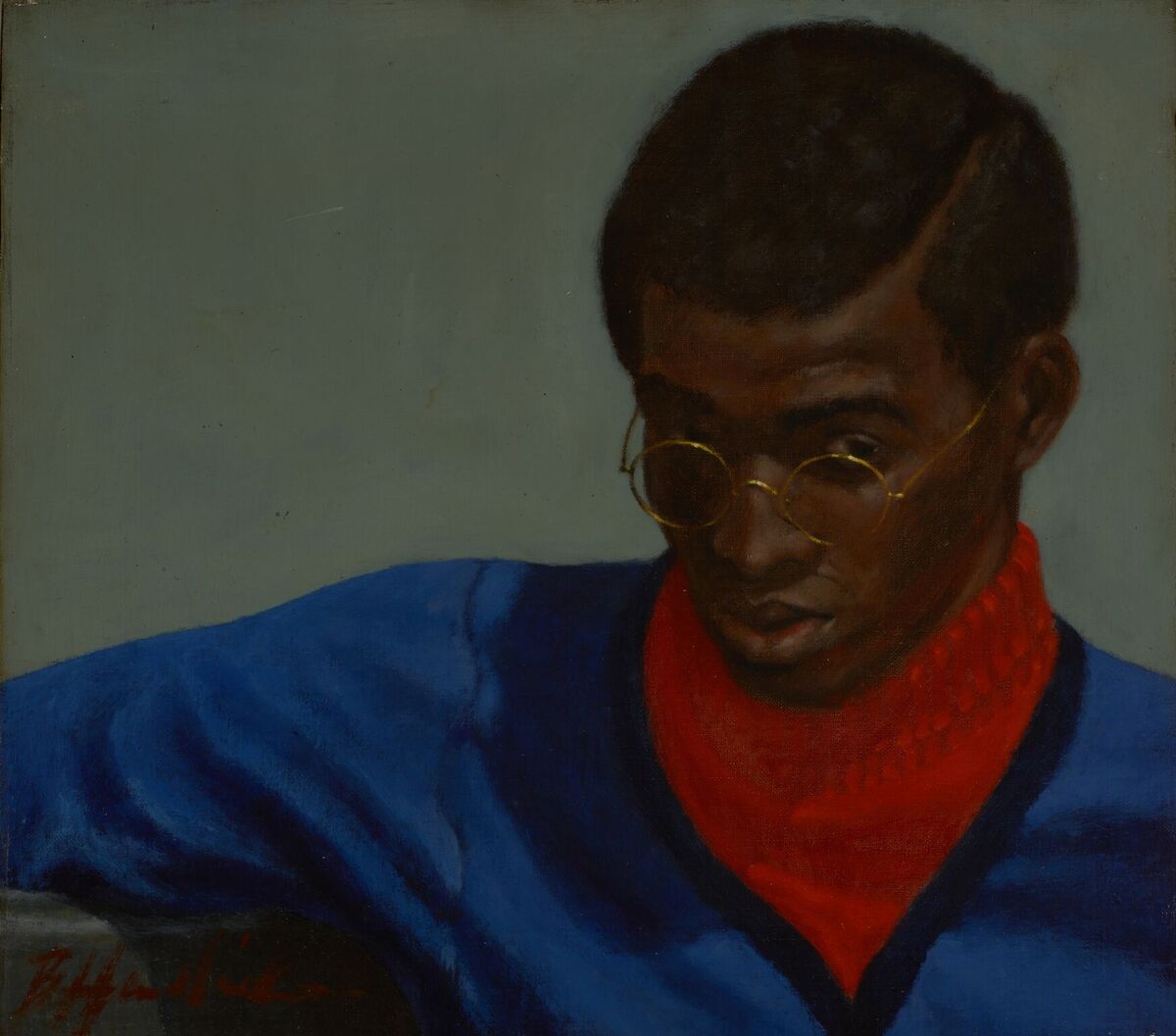 So the artist began to mix the three influences—the attitude of musicians like Simone and Davis, the iconic style of old world European painting, and the everyday black folks he knew from the neighborhood or saw strutting through the streets—in a distinct visual style that has been referred to as “cool realism.” Works like his 1974 oil What’s Going On, titled after Marvin Gaye’s smooth 1971 protest album, often show black figures, en vogue or nude, against flat, bright monochrome backdrops.
The four portraits and one still life on display in “Barkley Hendricks: ‘Let’s Make Some History’” were all painted early in Hendricks’s career. Toast of Amos (1966) is the earliest work on display. It shows a young student, teasingly nicknamed “Toast” because of the shade of his skin, fashionably sporting a long side part in his closely cropped brown hair. Set against an olive green background, he wears a woolly red turtleneck and blue cardigan; his eyes are cast downward behind circular thin frames as if he’s reading a book.
Hendricks portrays a dynamic subject who is complexly layered. He is pensive, stylish, and intellectual. Before Hendricks’s Toast, black subjects like him were hard to find in art. The artist was adamant that his work was not political and that he painted “personal joy and enlightenment,” but his early works manifested  a new, liberating way of seeing the black body on canvas. Toast is not a stand-in for a cause—which was typical of the art of the Black Aesthetics Movement—but a self-possessed individual. As Hendricks wrote in a 2008 essay, “How cool is that?” 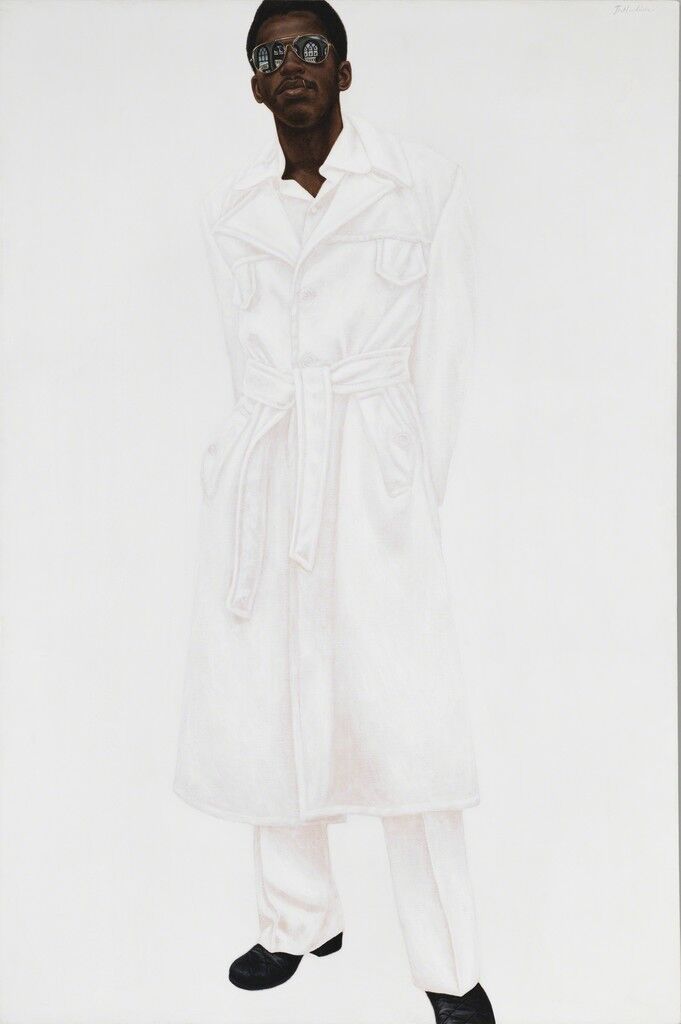 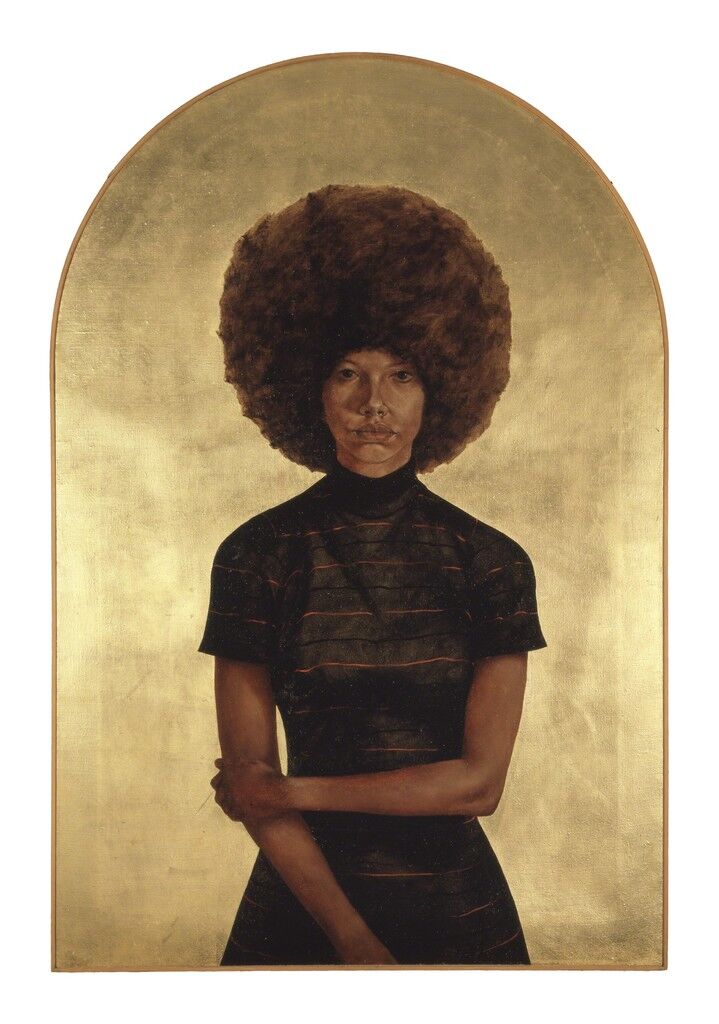 Barkley L. Hendricks
Lawdy Mama, 1969
The Studio Museum in Harlem
Advertisement
The picture of Toast illustrates the artist’s talent for exploring race by employing elements of 1950s abstraction, street photography, and touches of Old Master techniques such as chiaroscuro, thereby imbuing his figures with a strong physical presence. A similar cocktail of influences is present in Hendricks’s 1976 painting Northern Lights, a study in three poses of a black, disco-inflected Bostonian man, depicted against a muted grey background. He wears a green trench coat and matching wide brim hat.
“Someone once referred to the figure I did in the Northern Lights painting as a pimp,” wrote Hendricks in his exhibition catalogue essay for “Birth of the Cool,” his first career retrospective, which took place at the Nasher Museum of Art in 2008. “It was his big hat and large fur-collared coat that was behind that assessment. I said I once saw Ronald Reagan in the same large fur-collared coat. Did that make him a pimp?”
The two paintings are indicative of the style of large-scale portraiture that Hendricks became known for in the years that followed, and which was a critical influence on artists such as
Mickalene Thomas
,
Kehinde Wiley
, and
Rashid Johnson
, as well as his students at Connecticut College, where he served as Professor Emeritus of Studio Art. These portraits belong to the collections of the Whitney Museum of American Art, the Studio Museum in Harlem, and the Tate Modern, among other institutions. 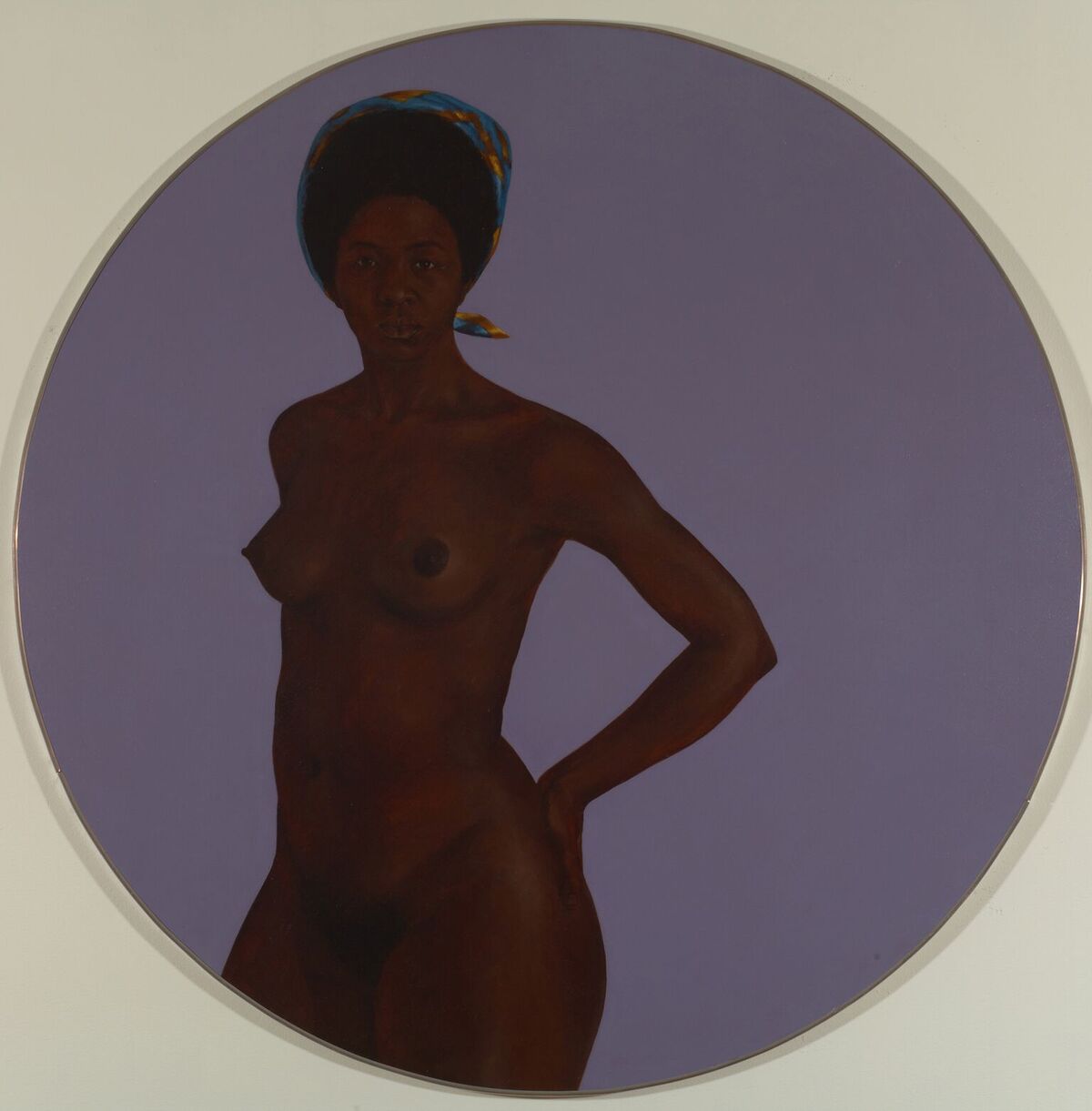 Hendricks contributed not only to the representation of black men in art, but also to the portrayal of black women. His 1975 tondo Sister Lucas depicts a nude black female with a hand on her hip and hair tied back underneath a colorful headscarf. She stands alone, self assured, in a sea of purple. What does the painting say about this ordinary woman, and black femininity more broadly? With nothing in the background to draw attention away, she is the sole focus of the viewer’s eye.
For an artist who is well-known for nude self portraits like Brilliantly Endowed (Self-Portrait) (1977), the presentation of Sister Lucas shows that Hendricks also deeply considered the black female form—and that he sought to counter disempowering representations of black men and women and art’s overwhelming championing of whiteness as the only celebration of corporeality, spirituality, and truth. Hendricks’s paintings established that, in art and life, black people are as worthy of being seen as they are.
Despite Hendricks’s explicitly apolitical stance, he did create a few paintings that took a clear political position. Created for his last ever solo show while the artist was alive, at Jack Shainman Gallery in 2016, Roscoe (2016) shows a man wearing a shirt that says, “Fuck Fox News.” Another, the portrait FTA (1968), whose title is an acronym for “Fuck the Army,” is also on display at Bowdoin. It’s the only work in the show that has been seen publicly before, having been shown at the Nasher retrospective, which was curated by the artist’s longtime friend and the museum’s chief curator, Trevor Schoonmaker.
Homann points out, however, that when Schoonmaker presented it, he did not give an explanation of the letters FTA. “I think it adds important context,” he says. FTA was painted in 1968 after the artist was drafted into the New Jersey National Guard during what Hendricks called “the corruptness of the Vietnam War.” The work reflects the anxiety and betrayal that many black men who served felt about potentially dying for a country that resisted the Civil Rights Movement. 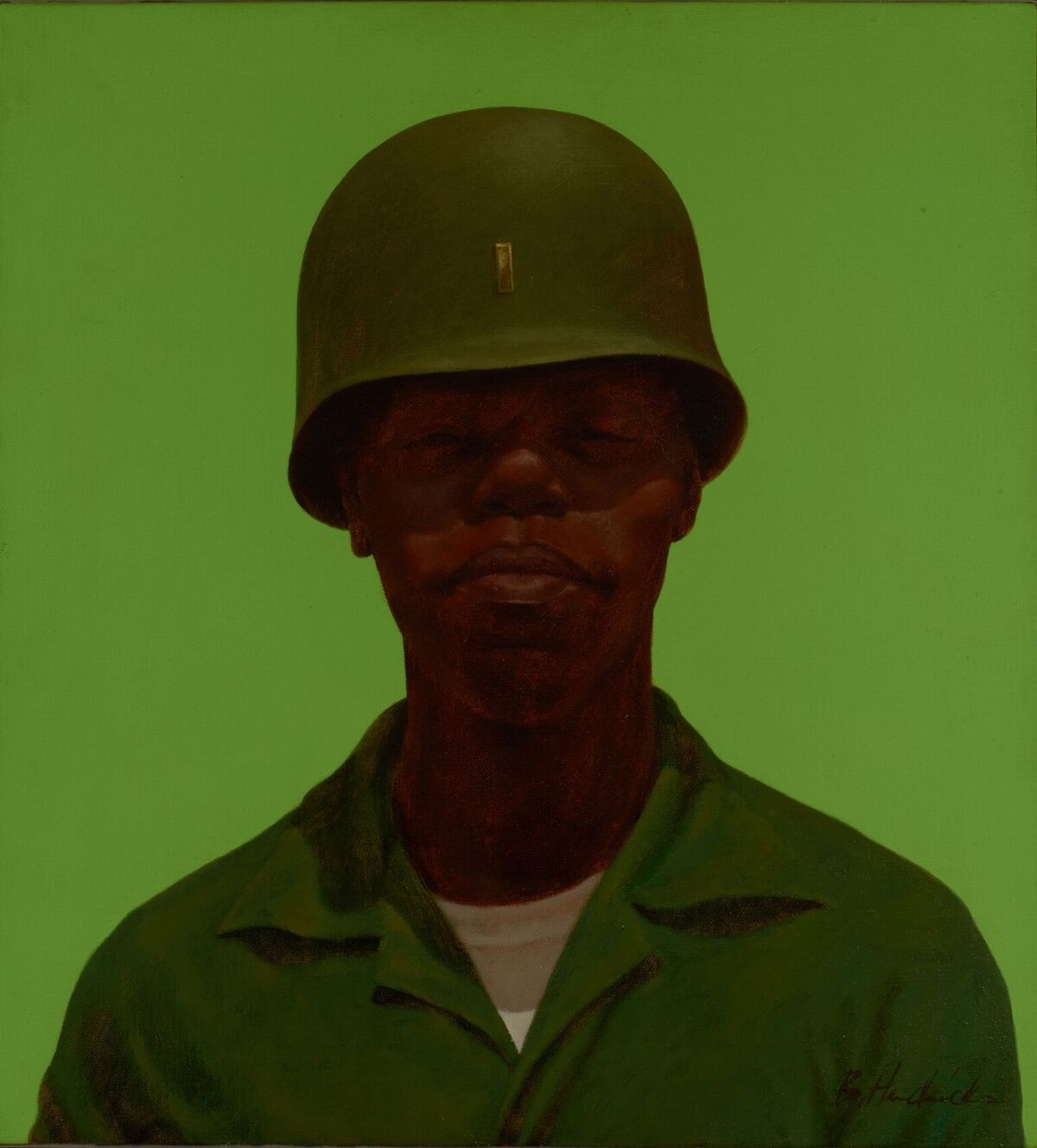 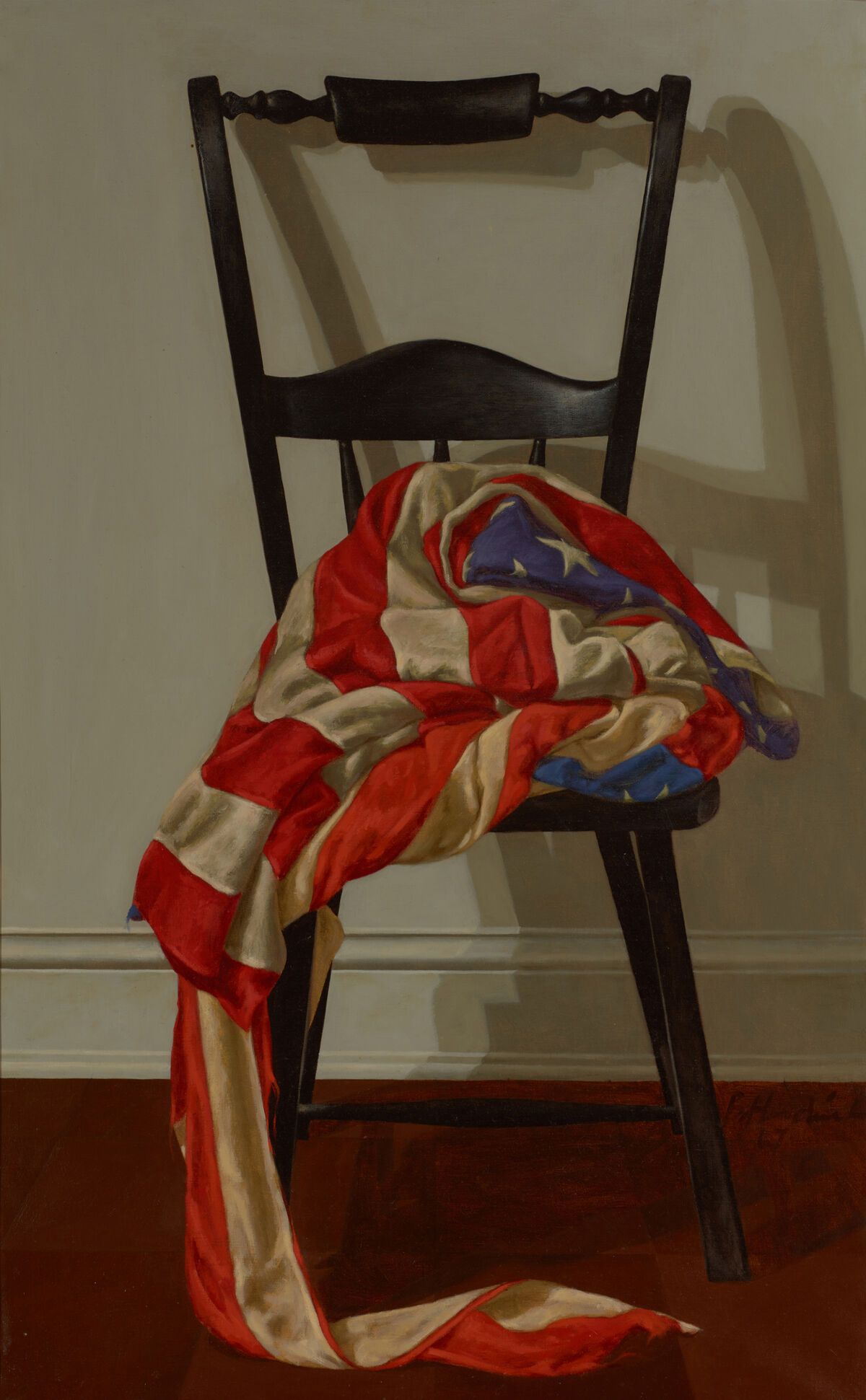 Also on view at Bowdoin, the 1967 still life Star Spangled Chitlins depicts an American flag spilling out of a brown chair. It’s another in which Hendricks intimates a subtle political message: the idea that the American flag, all crumpled up, looked like chitlins, a stew made from the bowels of pigs (considered the worst cut of meat) that was historically eaten by slaves. The dish is now considered an African-American Thanksgiving delicacy. Here, Hendricks seems to both celebrate and abominate America.
“Barkley Hendricks: ‘Let’s Make Some History’” is mounted in a gallery across from another exhibition featuring some of the museum’s vast collection of federalist era portraiture. In the doorway, connecting the galleries, one can see two works: Hendricks’s Northern Lights and Robert Feke’s painting Portrait of Brigadier General Samuel Waldo (c. 1748–50). The black man from Boston and the white man of colonial America are both brilliantly costumed—as it turns out, quite similarly. Despite the time and space that separates them, they stare at each other as free men would.
This conversation between the two artists and their subjects conveys the power of representation in the canon of American portraiture, and indeed speaks volumes of the history that Barkley L. Hendricks made, painting black Americans with such a radical, equalizing coolness.
Antwaun Sargent
Related Stories