What You Need to Know about Bauhaus Master Anni Albers 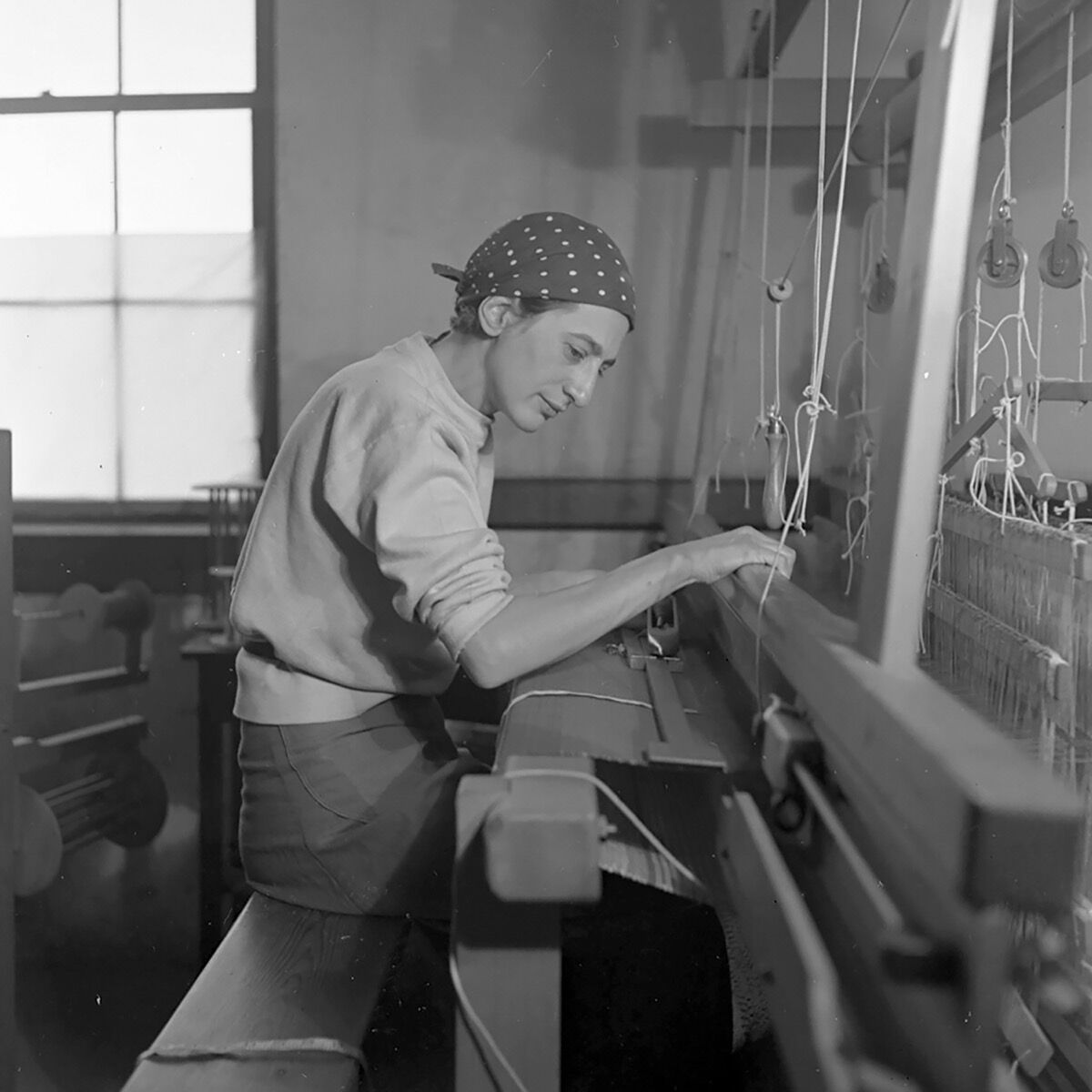 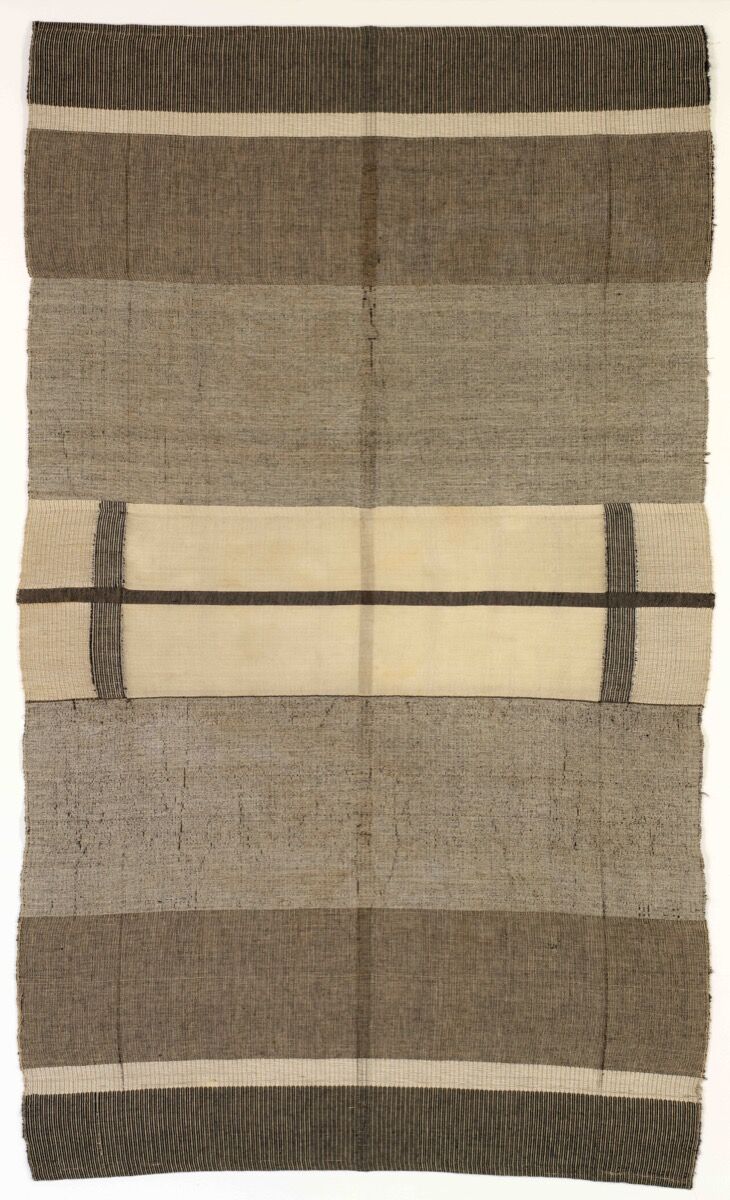 The great textile artist and abstractionist
Anni Albers
found her medium—weaving—by accident.
It was 1922, and Albers had just been accepted into the
Bauhaus
, the pioneering school in Weimar, Germany, whose lofty goal was to spread aesthetically rigorous, functional art and design across the globe and make it accessible to all, regardless of wealth or class. The Bauhaus offered courses in many different specialities, including woodworking, metal, wall painting, and glass. At the time, however, most women ended up in the weaving workshop.
While the school celebrated its commitment to gender equality in promotional pamphlets, the reality wasn’t as even-handed. In 1920, Bauhaus founder
Walter Gropius
informed one female applicant that “it is not advisable, in our experience, that women work in the heavy craft areas such as carpentry and so forth.” He continued: “For this reason, a women’s section has been formed at the Bauhaus which works particularly with textiles; bookbinding and pottery also accept women.”
Though it was by no means Albers’s first choice—she’d have preferred glass—the ambitious young artist ended up at the loom. “Fate put into my hands limp threads!” she later recalled. “Threads to build a future?” Despite her reticence, though, she took to the medium. And through an experimental approach to material, and an inventive handling of undulating line and geometric pattern, she proceeded to advance not only textile art, but also the course of
abstract art
—a movement that her male contemporaries
Paul Klee
,
Wassily Kandinsky
, and her husband
Josef Albers
are sooner recognized for.

Who Was Anni Albers?

Albers was born Annelise Elsa Frieda Fleischmann in the upmarket Berlin neighborhood of Charlottenburg on June 12, 1899. She was the daughter of a wealthy family; her mother’s forebears had built the Ullstein publishing empire and her father owned a thriving furniture manufacturing business.
But as she reached her late teens, she began to stray from the path that was expected of her, one that would entail settling down with a man of means. “[She] swam against the stream, she was rebellious,” her sister-in-law later recalled to scholar Pandora Tabatabai Asbaghi, in her and Nicholas Fox Weber’s 1999 monograph Anni Albers. Albers was also passionately creative, and after some cajoling, she convinced her rather old-fashioned father to allow her to attend art school.
She tried Hamburg’s Kunstgewerbeschule (School of Applied Arts) first for two months, but the institution’s dry instruction didn’t satiate her experimental appetite. Serendipitously, she happened upon a pamphlet for the fledgling Bauhaus School soon after. Intent on applying, she made her way to Weimar just before turning 23. There, she set up in a small, rented room—where she was only permitted one bath a week, down the hall—and pulled together her application. 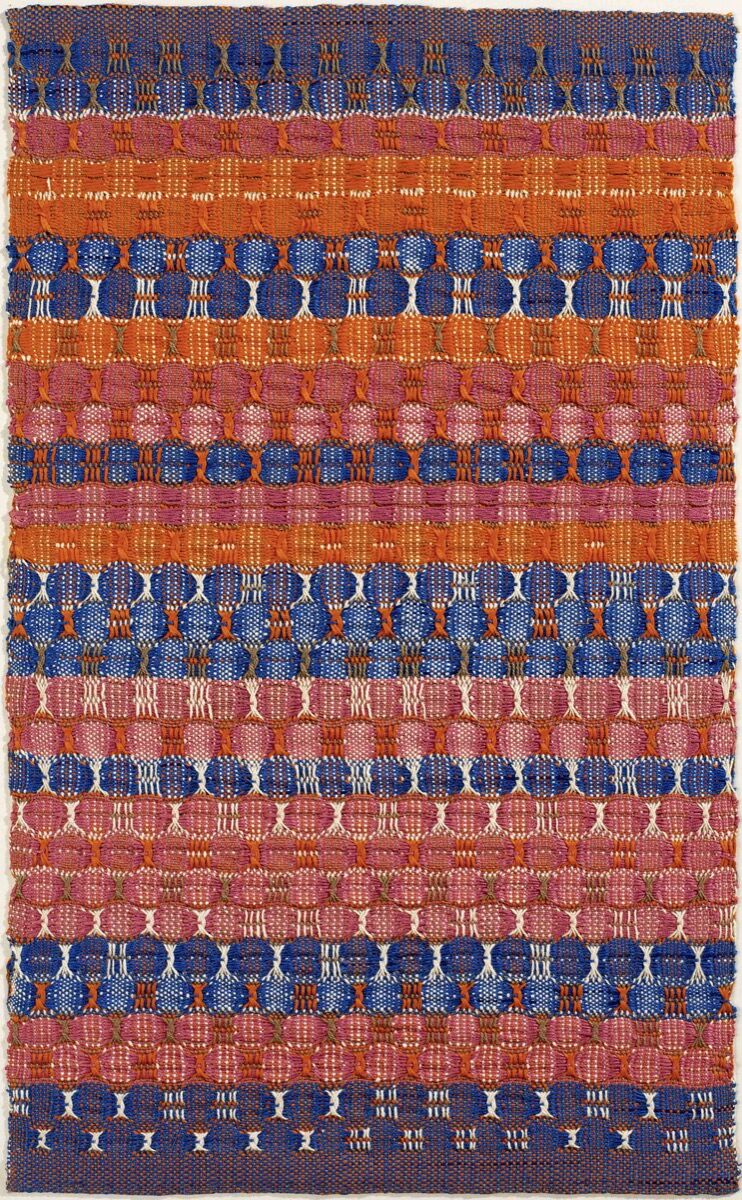 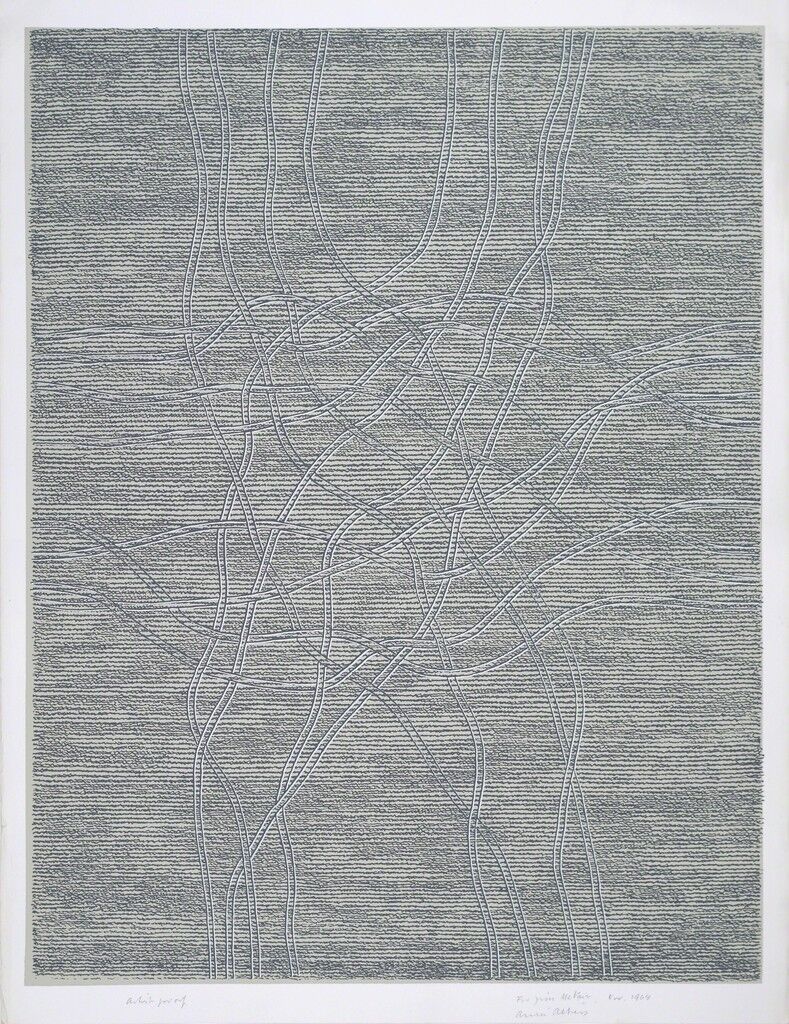 Anni Albers
Untitled I, 1964
Francis Frost
After being denied once, she reapplied and entered the school as a student in the weaving workshop in 1923. It was there that she developed the basis of her influential practice, learning the tenets of weaving alongside Gunta Stolzl, and the principles of abstraction through Klee. She supplemented these courses with her own research into the history of textiles. Trips to ethnological museums like Museum für Völkerkunde in Berlin and Munich, and tomes like Walter Lehmann’s Kunstgeschichte des Alten Peru (1923) and Marguerite and Raoul d’Harcourt’s Les Tissus Indiens du Vieux Pérou (1924), offered Albers a first glimpse into the ancient textile art of Peru, which would go on to become one of her greatest influences.
It was also at the Bauhaus that she met and fell in love with Josef, a student in the glass workshop who was 11 years her senior. He would go on to become one of the most important geometric abstractionists of the mid-20th century. Later, she described the young Josef to Nicholas Fox Weber, the director of the The Josef and Anni Albers Foundation, as “a lean, half-starved Westphalian” with “irresistible blond bangs.” They married three years later, and would go on to make art, teach, write, and travel alongside each other for the next 50-some years.

Albers considered Klee, in particular, a guiding light during her early years as an artist. He began a course in the weaving workshop in 1927, where she was exposed to both his theories on abstraction and his paintings, which were rich in symbols and colors. She was especially excited by Klee’s “repeated insistence that the ultimate form of the work was not as important as the process leading to it,” and his own use of formal experimentation and graffiti-like markings.
Klee believed that these elements could tap into the subconscious—a concept that she absorbed and embedded elegantly into her abstract tapestries, making it her own. “I heard [Klee] speak and he said take a line for a walk, and I thought, ‘I will take thread everywhere I can,’” she once said.
Indeed, she did. Her early works from the mid-1920s were already marked by her innovative approach to the process of weaving—which, as the Bauhaus encouraged, intertwined form and function, ease of production and formal experimentation. She combined loom-weaving with hand-weaving; reproducible geometric patterns and spontaneous, on-the-loom decisions; and organic and synthetic materials.
Her designs “provided an alternative to the narrative and figural European tapestry tradition—in which a textile was produced by weavers based on cartoons often created by others—and allowed the modern weaver to compose directly on the loom,” wrote Virginia Gardner Troy in her essay “Thread as Text: The Woven Work of Anni Albers.” The resulting works brim with squares, rectangles, and lines arranged in delightfully irregular patterns and rendered in kaleidoscopic colors and gradients, so that they seem to jump from their fiber substrate. 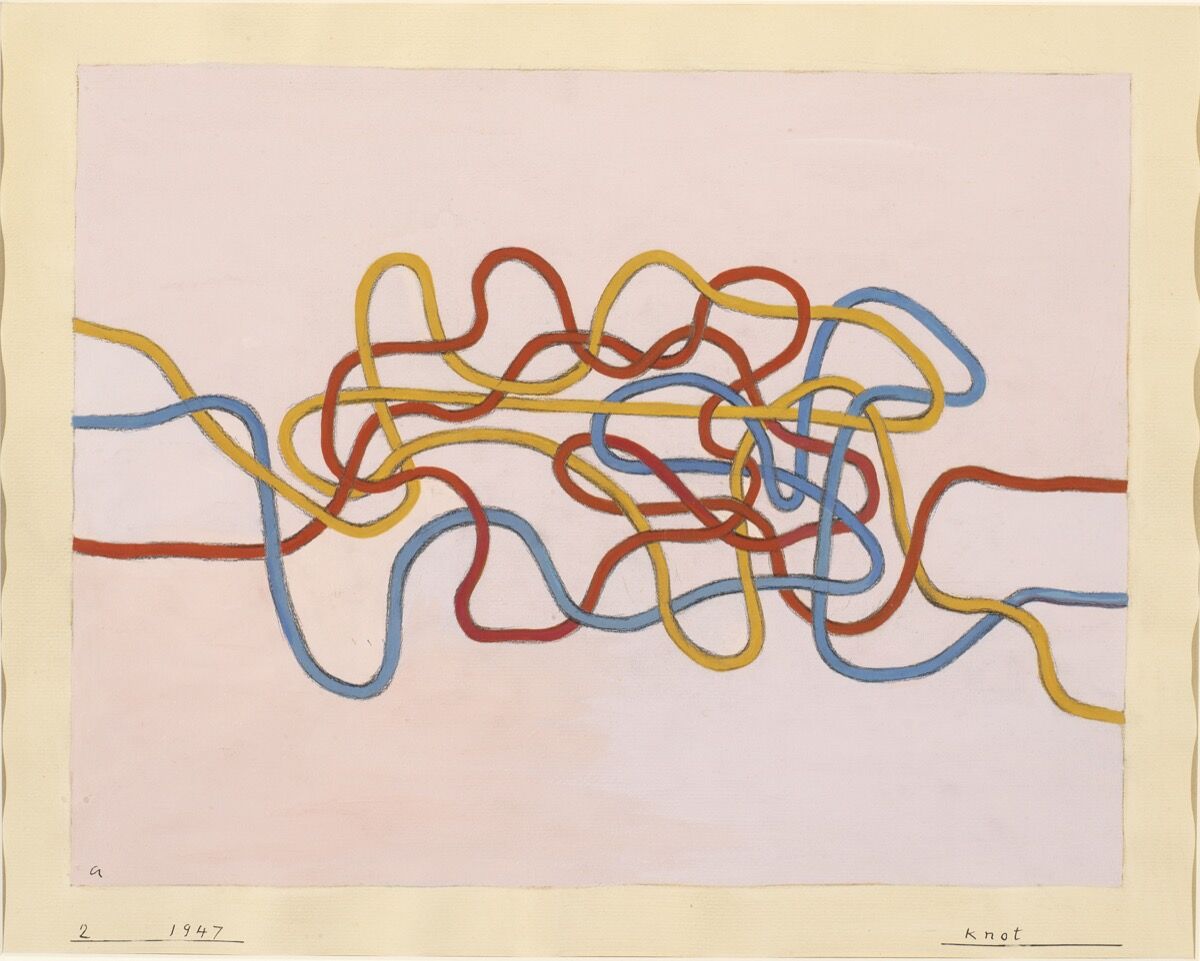 Advertisement
She also worked on functional commissions such as room dividers and curtains. One even earned Albers her Bauhaus diploma: In 1929 Bauhaus architect Hannes Meyer tapped Albers to design a wall covering for the new auditorium he was constructing. Her design was unprecedented—it joined the newfangled material cellophane, on one side, with cotton on the other, to create a sound-absorbing and light-reflecting material.
After Albers had a brief stint as head of the weaving workshop from 1931–32, the Bauhaus was shuttered by Germany’s National Socialist Party. And by 1933, she and Albers were on their way to the United States (Albers was of Jewish descent and, as she said, “had the wrong kind of background in Hitler’s ideas”), where they began teaching at the progressive art school Black Mountain College near Asheville, North Carolina.
There, Albers continued to cultivate her weaving practice, informed in large part by frequent trips to Peru and Mexico and the visual languages (symbols, pictographs) and Andean weaving techniques she encountered there. She’d go on to refer to Peruvian weavers as her “greatest teachers,” and described their work as “infinite phantasy within the world of threads, conveying strength or playfulness, mystery or the reality of their surroundings, endlessly varied in presentation and construction, even though bound to a code of basic concepts.”
Albers famously dubbed her tapestries that resulted from these experiences as “pictorial weaving”:  intricate woven abstractions that evidenced her belief in thread as a “carrier of meaning,” as Gardner Troy points out in her essay. In some, like Black-White-Gold 1 (1950), lines of thread resembling twisting labyrinths or the silhouettes of age-old architectural structures rise from a shimmering substrate of interlaced cotton, jute, and metallic ribbon. Others, with titles like In the Landscape and Pasture (both 1958), reference the mountain ranges and vistas of Central and South America.
While Albers expanded the capabilities of her medium, she acknowledged that the structure and limitations inherent in the weaving process could stifle creativity—so she always encouraged a healthy amount of what she thought of as “play,” both in her own work and her teachings and prolific writings. In a 1941 article “Handweaving Today: Textile work at Black Mountain College,” she advocated for an elementary approach with “a playful beginning, unresponsive to any demand of usefulness, an enjoyment of colors, forms, surface contrasts and harmonies—a tactile sensuousness.”
This playfulness led her outside of her own weaving studio, too. Albers made jewelry collaboratively with a Black Mountain College student, Alex Reed, from the parts of everyday objects and appliances, like metal washers, bottle caps, and curtain rings. Later, while residing in Connecticut, she also collaborated with the manufacturing and textile companies Knoll and Sunar on fabrics that were produced in bulk for many years. And in 1963, she turned her full attention to printmaking, a medium where she discovered that, through images of threads, she “could project a freedom I never suspected.”

Why Does Her Work Matter?

“Why Anni Albers?” wrote Fox Weber in his introduction to a major monograph devoted to Albers’s work, Anni Albers, published in 1999, several years after her death in 1994. “To begin with, she transformed textiles into an art form.”
Indeed, Albers can be said to have introduced weaving—and textiles in general—into the closed-door realm of early 20th-century, Western fine art (limited primarily to painting and sculpture made by men). In 1949, an exhibition of Albers’s work at the Museum of Modern Art (“Anni Albers Textiles”) marked the first time any textile artist was featured in a solo show at the institution. It traveled to 26 museums across the U.S. and Canada. 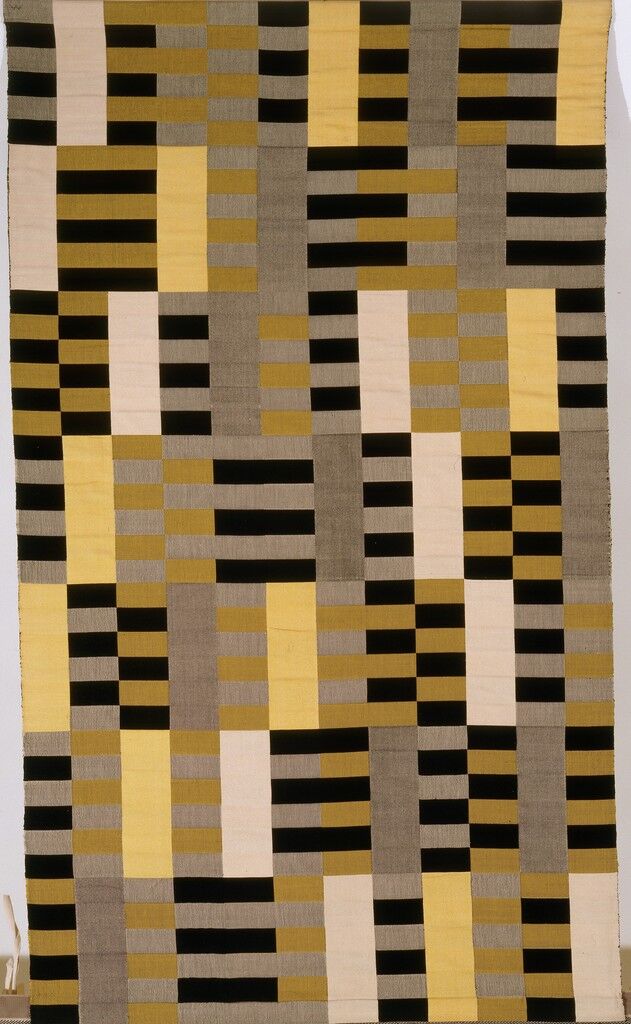 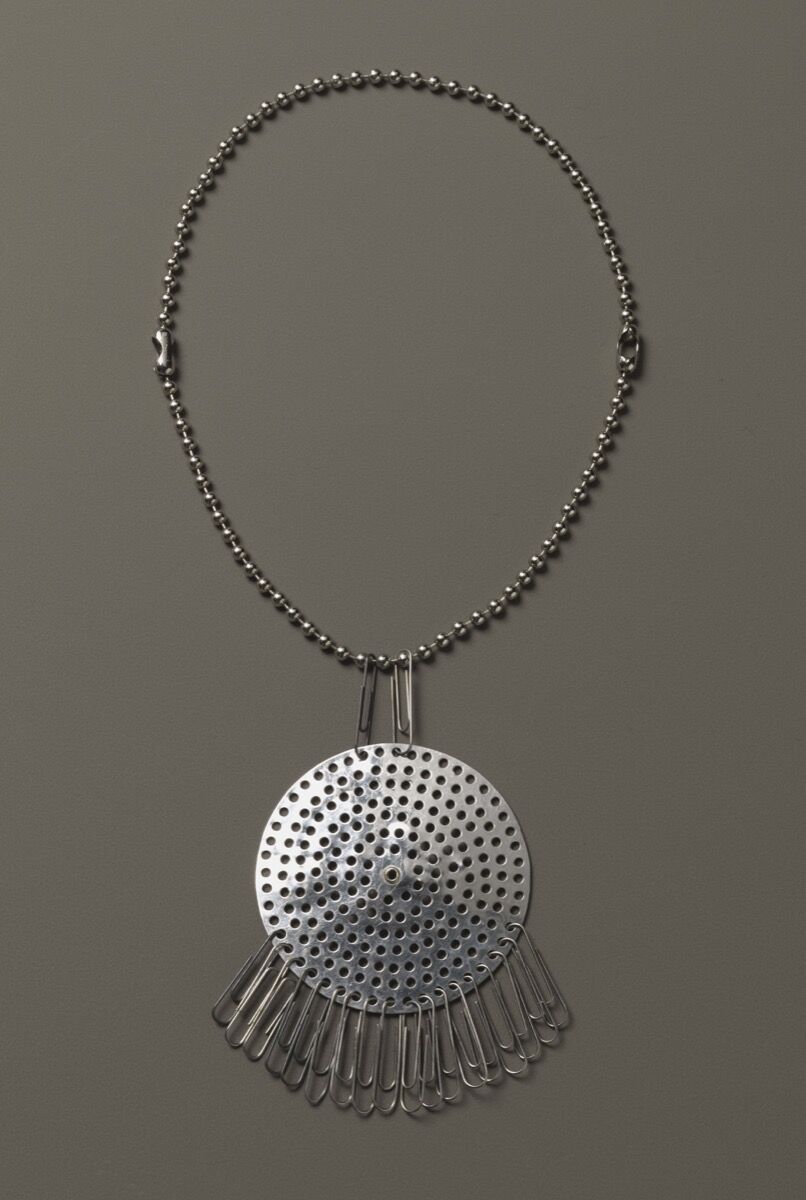 “Anni Albers, more than any other weaver, has succeeded in exciting mass realization of the complex structure of fabrics,” artist, designer, and theorist
R. Buckminster Fuller
said. “She has brought the artist’s intuitive sculpturing facilities and the agelong weaver’s arts into historical successful marriage.” She also expanded abstraction beyond painting and sculpture to incorporate not only techniques traditionally associated with “women’s work,” but also those gleaned from ancient cultures, whose refined artistic contributions had, at the time, barely been recognized by Western art history.
These inspirations were not only showcased in her work, but also recorded for posterity in her teachings and extensive writings. Her texts On Designing (1959) and On Weaving (1965), for instance, are to this day regarded at the level of holy writ in many art, design, and textile courses.
Through her imaginative, deft work and eloquent words, Albers has left a legacy characterized by an energetic balance of history and innovation, of abstraction and content, of material and form. “How do we choose our specific material, our means of communication?” she once wrote. “‘Accidentally.’ Something speaks to us, a sound, touch, hardness or softness, it catches us and asks us to be formed. We are finding our language, and as we go along we learn to obey [its] rules and [its] limits.”
Alexxa Gotthardt
Related Stories