In Series Of “Installation” Concerts, Beach House Aims to Blur Line between Audience and Performer 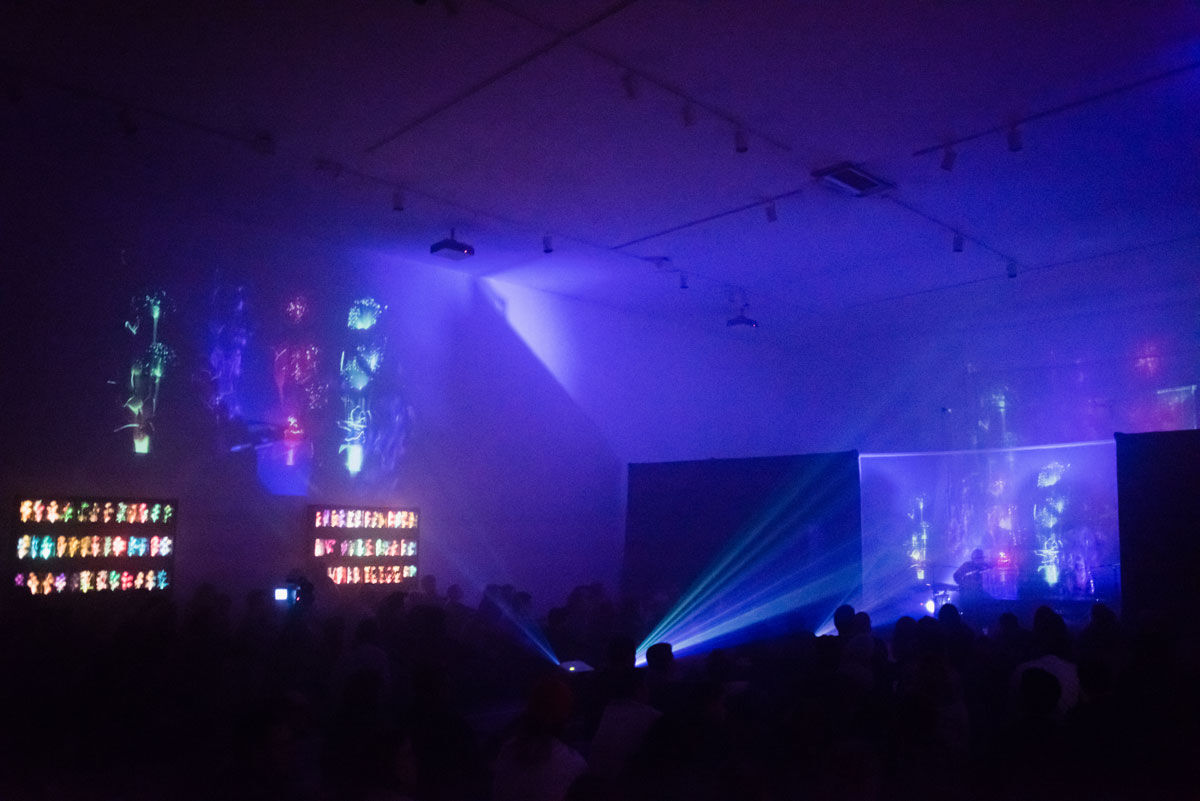 Kanye West and Jay-Z rapped from the tops of two towering video cubes, each side a screen displaying sharks on the prowl, during their 2011-2012 “Watch The Throne” tour. Miley Cyrus made a grand entrance for 2014’s “Bangerz” via a neon pink slide fashioned to look like a tongue protruding from a blown-up image of her own face. These sorts of jaw-dropping backdrops are a logical conclusion in a world in which musicians now make a lion’s share of their income from tours, not album sales. Yet no matter how spectacular the visuals, the formula remains the same: There’s an audience watching a performer who stands on stage.
In February, Baltimore duo Beach House looked to alter that equation when they announced a set of “installation” performances to coincide with their tour for last year’s critically acclaimed albums Thank Your Lucky Stars and Depression Cherry. These shows—which run through early May—are capped at 200, held in alternative spaces like galleries or community centers, and feature an hour of uninterrupted music. Guitarist Alex Scally explained the band’s objective to T Magazine: “When you go to a show, you are there to watch somebody perform for you. The stage is a dividing line. The goal is that people will kind of lose where they are, and go into a very internal place in their mind.”
That’s how I found myself waiting in line with a couple hundred Beach House super-fans at the Knockdown Center in Maspeth, Queens (a place I imagined might be a taekwondo studio; it is, in fact, an arts space), wondering how exactly the band would blur that line between audience and performer. We filed into the former factory space, taking a seat on the concrete floor to gaze expectantly towards what we assumed was the stage—a square screen lit with undulating red and blue lights a lá
James Turrell
. The band appeared, seated in shadow behind a now-transparent screen lit by video projections of floral imagery. Along another wall of the room ran a phosphorescent case of fiber-optic flowers, the lights pulsing with the music.
The show was excellent—the gauzy images fluttering across the screen provided a fitting reflection of the band’s dreamy synths and ethereal vocals that filled the intimate space. But did their performance “double as art,” as the New York Times claimed in a headline? 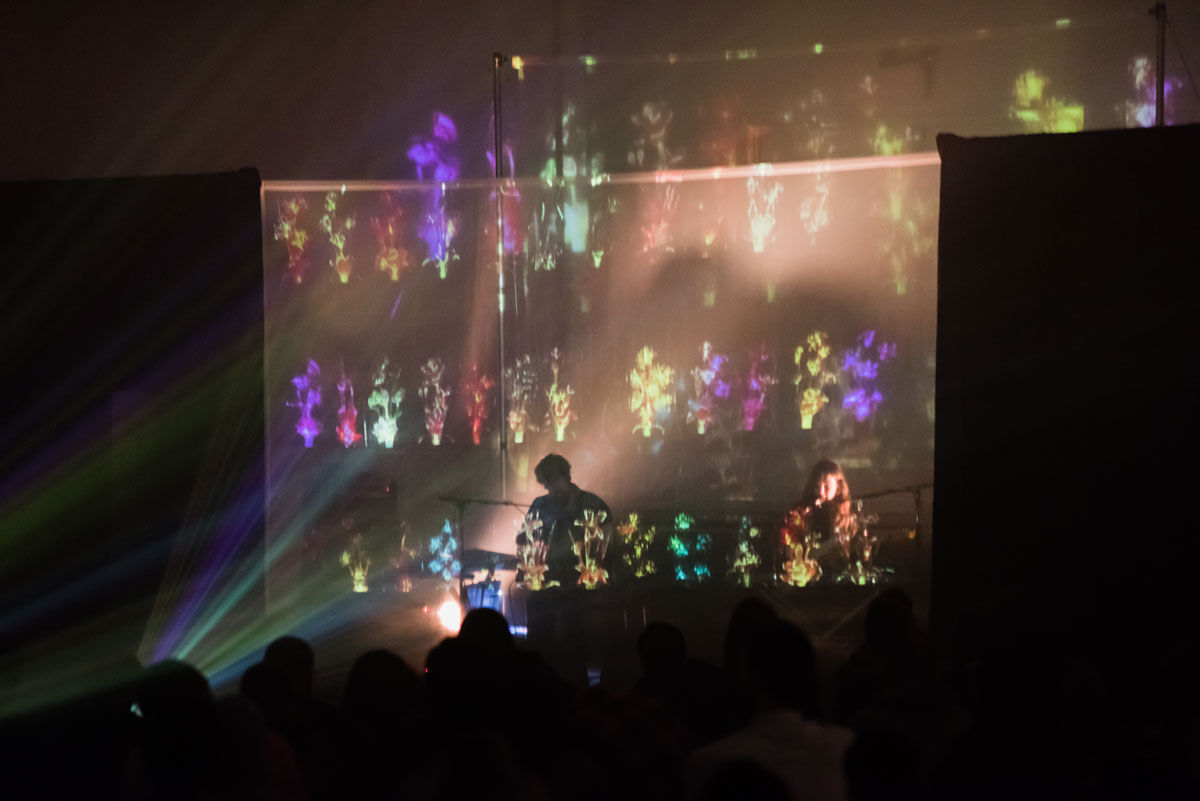 Advertisement
Installation art
is admittedly wide-ranging and difficult to categorize, but professor Claire Bishop lays out some overarching characteristics of the form in her book Installation Art: A Critical History. Unlike a traditional painting, sculpture, or video—which require only a “pair of disembodied eyes”—installation art depends on all five senses and a physical body that can move through a space. Works of installation art “deny the viewer any one ideal place from which to survey the work,” Bishop writes, replacing the traditional model of art viewing with one incumbent on a multiplicity of perspectives.
More specifically, Bishop divides installation works into several broad categories, and Beach House’s vision for their project overlaps heavily with what she terms the “dream scene.” In these sorts of installations, “the viewer does not identify with a character depicted in a scene but is placed in the position of the protagonist”—the sort of mental absorption and physical immersion one experiences in a dream.
It’s clear there are monumental roadblocks in the path from concert to installation art. A live show functions as the total opposite of Bishop’s “dream scene,” since the protagonist of any concert experience is the band—all eyes are trained on them, all ears are cocked for the next lyric or strummed chord. And while a concert does assume the audience is more than a pair of eyes, it’s really only expanding that definition to a pair of disembodied eyes and ears. There’s one perspective, both aurally and visually.
Such restrictions also are part of theatrical performances, during which audiences watch from a set position, unable to interact with space in any meaningful way. But as with music, theater has seen pockets of experimentation—take The Industry in Los Angeles, a company engaged in pushing the boundaries of opera and performance. The Industry’s most recent work, Hopscotch, was considered a “mobile opera.” The performance took place at multiple sites across LA with a fleet of limousines ferrying audience members from place to place. It’s the kind of thing that could potentially be translated to a rock concert, perhaps by allowing the audience to move around in a space where the sound changes depending on location.
There’s a catch, though, and that is that the more complex and innovative these shows get, the more expensive they will likely become. And that, in of itself, goes against the ethos of early installation art. As a genre, installation art can be traced back to the 1960s Happenings in New York City—a backlash against the high market value of
Abstract Expressionist
works. Eschewing the gallery setting, artists like
Allan Kaprow
and
Claes Oldenburg
instead set up their performances and “environments” in church basements and abandoned storefronts. Their work often centered around critiques of capitalism, and as soon as they started to garner attention from thrill-seeking tourists, the magic faded.
Intentionally or not, bands’ forays into combining shows and art have so far been relatively restricted events. Take the xx’s performances at the Park Avenue Armory in 2014. As Nick Murray of Rolling Stone noted, the concept of the show “was burdened by how easily ‘exclusive event for the fans’ slips into ‘exclusive event for people who tend to find themselves at exclusive events.’” Beach House’s installation performances were more expensive than their regular shows to recoup higher production costs (something they acknowledged on their website, writing “we sincerely apologize if it’s unaffordable for any fans who may want to attend.”) But if concerts do begin to echo installation art, perhaps bigger price tags are unavoidable. The art world isn’t exactly known for being “non-exclusive.”
So, no, I don’t think the Beach House shows were technically installation art. Not quite. But the band deserves credit for introducing a provocative question that may someday help to transform the way we understand a concert—from the traditional model of an audience plus a performer to something more cohesive, more immersive. I’m looking forward to it.
Abigail Cain
Related Stories 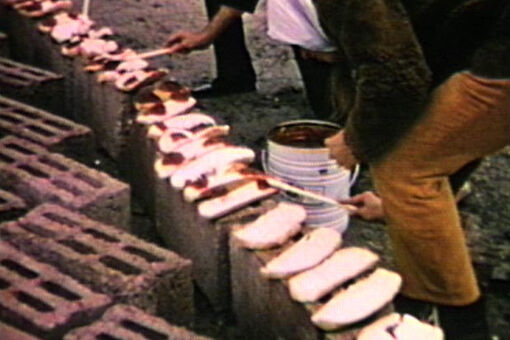