How Beirut’s Galleries Are Faring in the Wake of Tragedy 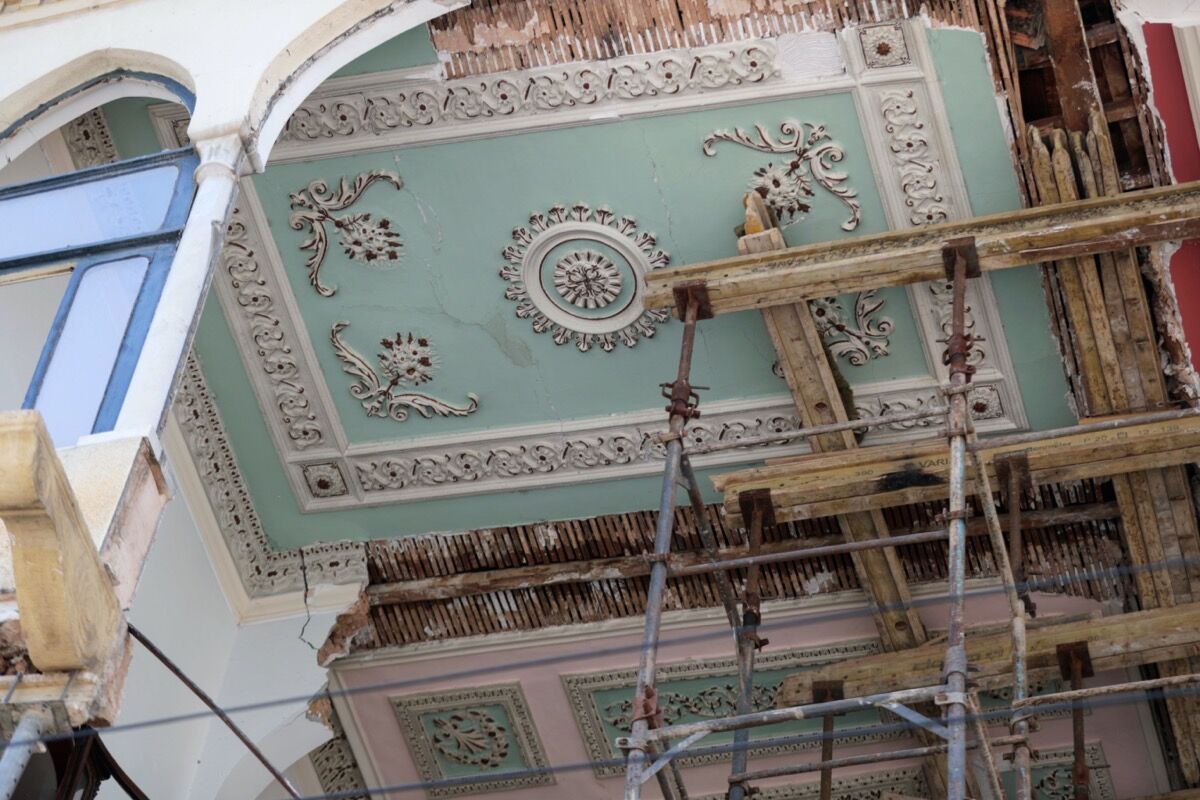 Scaffolding supports the fractured ceiling of a traditional Lebanese house in Beirut, in the aftermath of the explosions at the port of Lebanon’s capital which ravaged the city in early August. Photo by Anwar Amro / AFP. Image via Getty Images.

It’s been a month since, at 6:08 p.m. local time on August 4th, 2,750 tons of unattended ammonium nitrate erupted in twin explosions at the Port of Beirut. In a matter of seconds, the beloved Mediterranean capital was torn apart. At least 190 people were killed, more than 6,000 injured, and approximately 300,000 left homeless. The blast was so powerful that, by some estimates, it destroyed or damaged half of the city—its homes, businesses, and cultural institutions—and once again plunged its citizens into grief and despair.
“It’s very tough and painful. In the first days, we were in total shock and in survival mode. But now that we’re trying to process what happened, we’re not well,” said the Lebanese gallerist Joumana Asseily in a phone interview with Artsy. 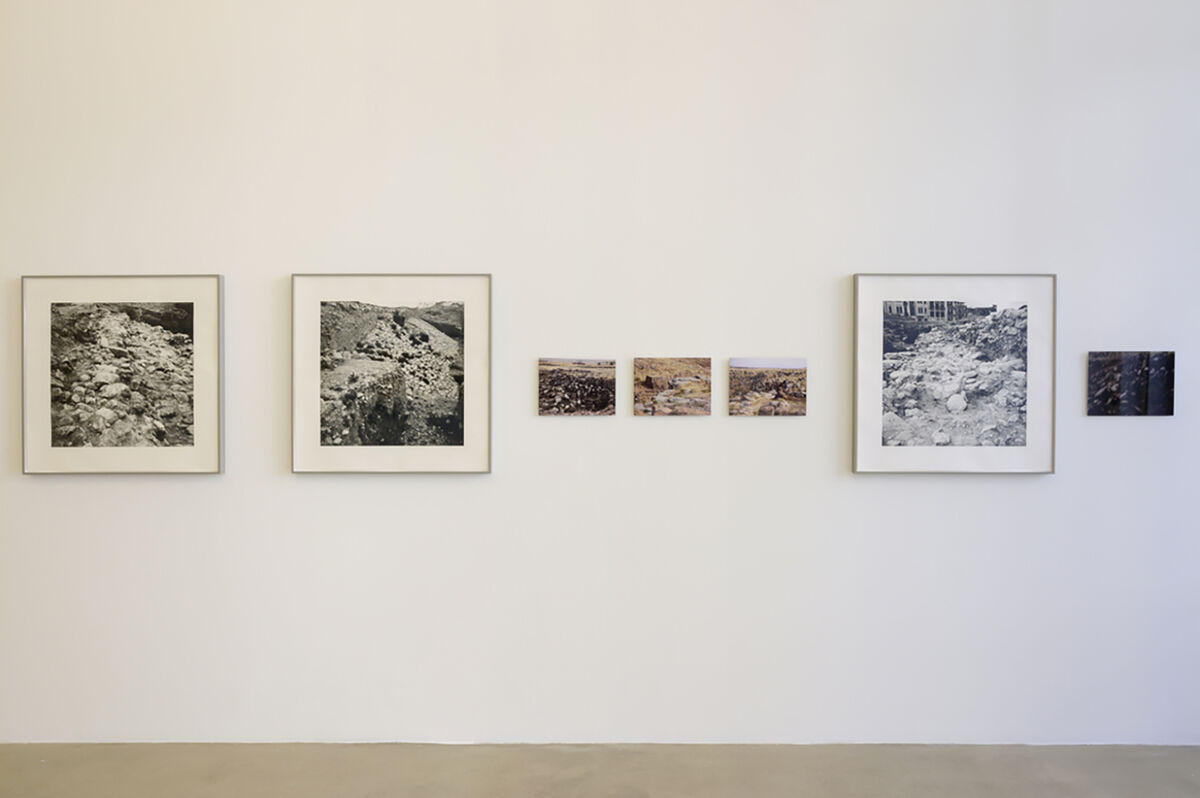 In 2015, Asseily found two garages and renovated them into a unified art space named Marfa’ Projects, which is, true to its Arabic name, situated in the city’s port district. Despite all that has happened, she fondly described the port as a “very special place,” acting as a gateway to the outside world—a role she aimed for her gallery to play as well, promoting young regional talent internationally.
Luckily, Asseily and her colleagues were away from the gallery when the blast occurred, but the space took a serious beating. “We took off on Monday and the blast happened on Tuesday,” she recalled. “Inside the gallery itself, everything was completely destroyed: Artworks have been damaged, walls fell down, and our offices are gone—we were 500 meters away.” 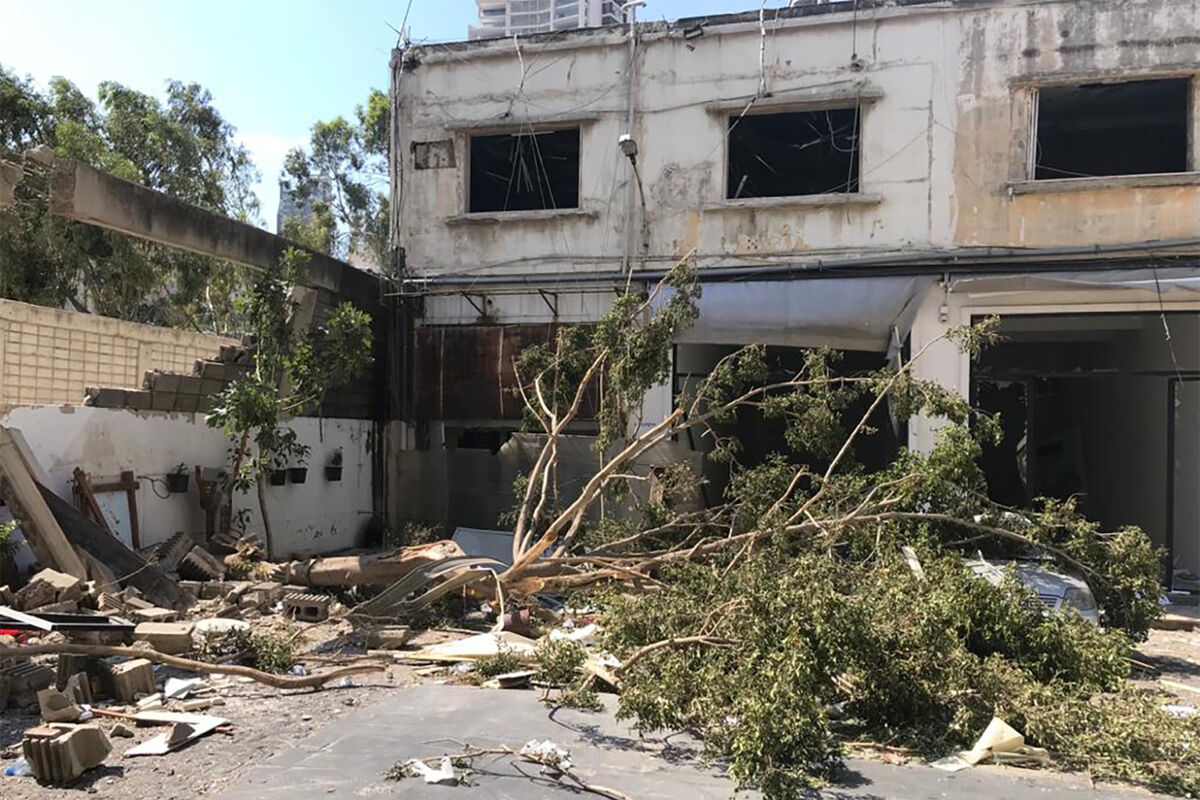 Advertisement
To many in Beirut’s diverse and liberal art scene of museums, foundations, nonprofits, and prominent galleries—spaces like Asseily’s, as well as Artscoops, Belvedere Art Space, Galerie Cheriff Tabet, Mark Hachem Gallery, Plastik Gallery, Galerie Tanit, and Artual Gallery, among others—this catastrophe represented the nail in the coffin. Lebanon had already been tainted by an unprecedented financial crisis following last year’s so-called October Revolution, when impassioned citizens began protesting en masse against the corrupt political class. The spread of COVID-19 in March made matters worse as unemployment spiked, causing an ongoing exodus of the young, experienced, and educated.
And yet a sense of community has emerged, with locals helping each other on the ground and galleries banding together. Among them is Munich-based Galerie Tanit, which opened its Lebanese outpost in 2007. It was the Beirut-born French architect Jean-Marc Bonfils—who was killed in the explosion—who designed the gallery’s high-walled space, located in the popular neighborhood of Mar Mikhaël, which is near the port. Known as Beirut’s beating heart with its vibrant ecosystem of galleries, bookshops, bars, and restaurants, the area has been severely damaged. 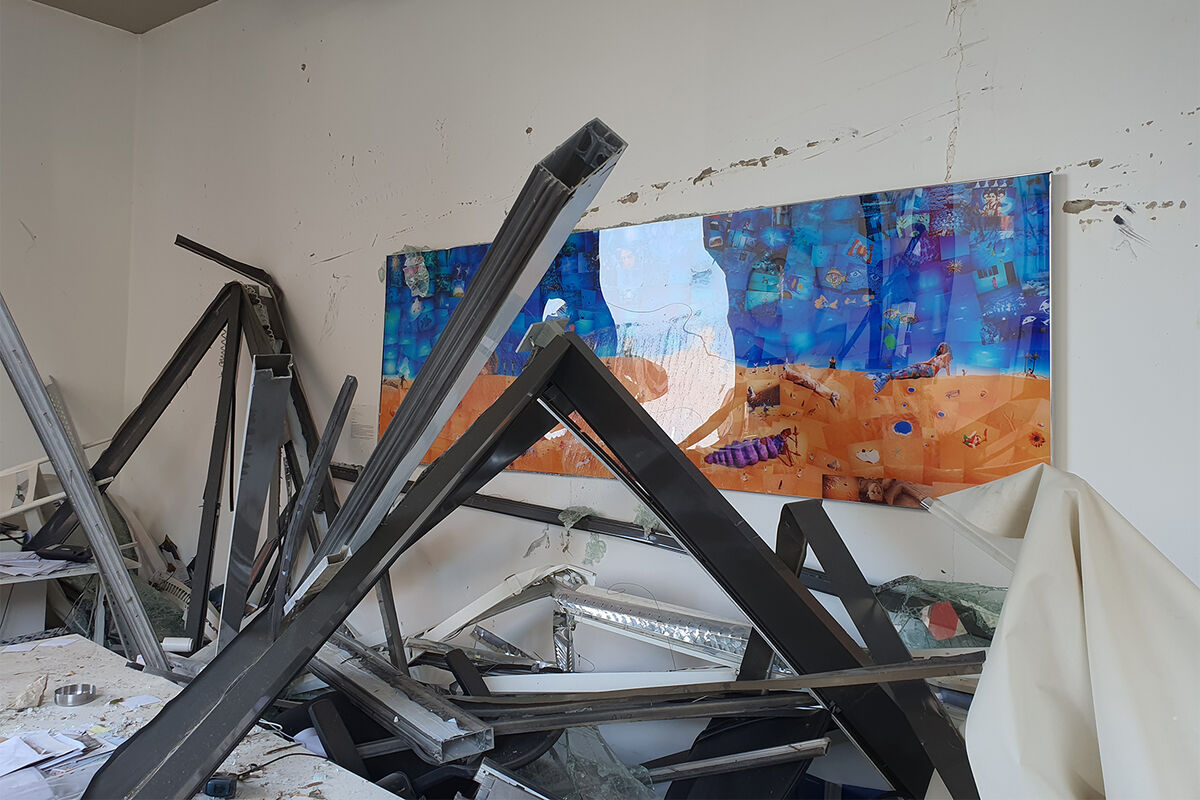 “You can’t imagine the smell of Beirut. There’s still dust from the glass—it’s awful,” Galerie Tanit co-founder Naila Kettaneh-Kunigk told Artsy. One of her employees was severely injured in the blasts, she said, and the gallery is “totally destroyed and needs to be rebuilt from A to Z.” She is committed to installing new walls and fixing the electricity and air-conditioning systems. The scattered shards of glass have been cleaned up and donated for recycling purposes to the local nongovernmental organization (NGO) Arcenciel.
In the meantime, the gallery’s raw space has been transformed into an open studio, where the Lebanese artist Abed Al Kadiri (whose previously displayed paintings were also ruined) has created a massive pair of murals comprised of 80 panels. He named the project Today, I Would Like to Be a Tree, portraying natural scenery with the use of charcoal. 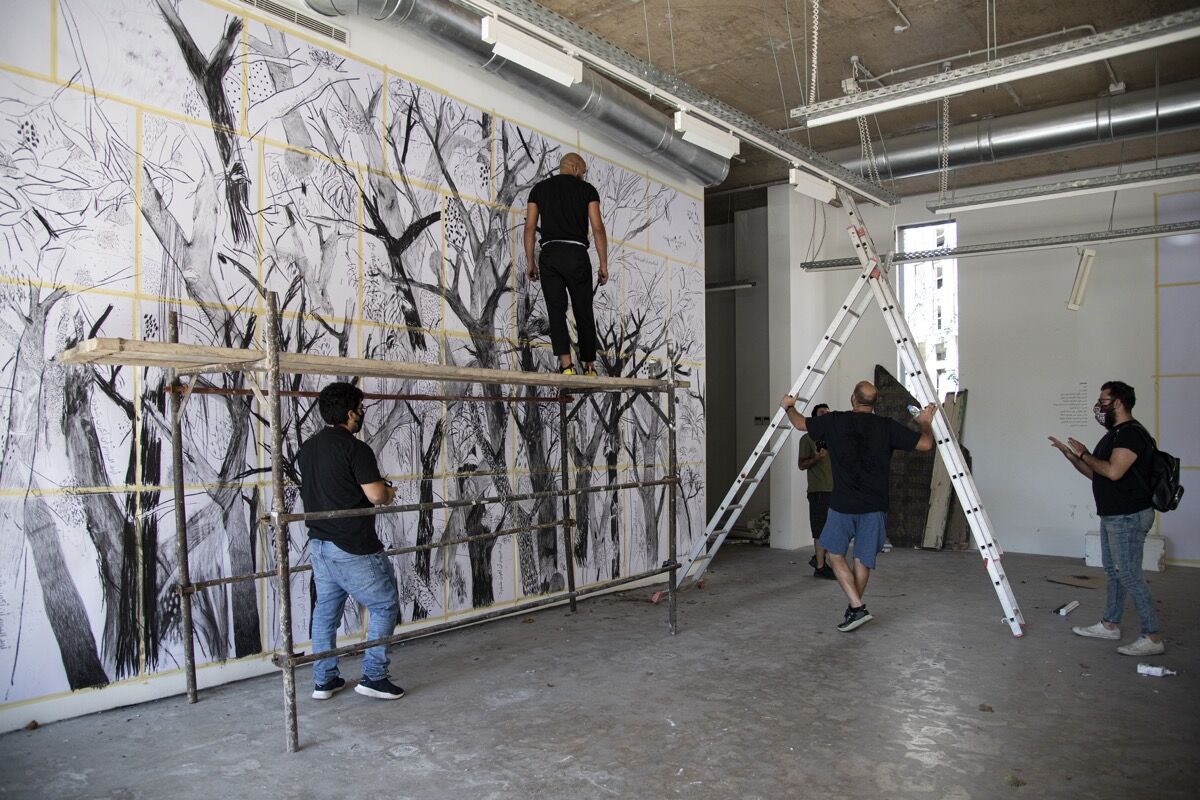 “A week after the explosion I dreamt that the gallery had flourished with trees,” he wrote in an Instagram post. “Today, this dream is coming to life. This is the least I can do and the only way to escape the devastating images that continue to plague my mind day and night.” The proceeds of each sold panel will be used to support the NGO Bassma in its efforts to help rebuild homes. A press conference was also recently held inside Galerie Tanit to launch the Beirut Heritage Initiative, which will spearhead efforts to restore gutted historical buildings.
According to Kettaneh-Kunigk, only the Lebanese Army has visited the gallery’s building, conducting a survey and requiring tenants and owners to send photographs of the damages. “What will it bring? We don’t know,” she said. “From the other authorities, we heard nothing. The Ministry of Culture didn’t even send a word, didn’t even give condolences—nothing. We are not martyrs, we are victims. They didn’t even put the flag at half-mast. They don’t care about us, or they say they care, but I don’t see how.” 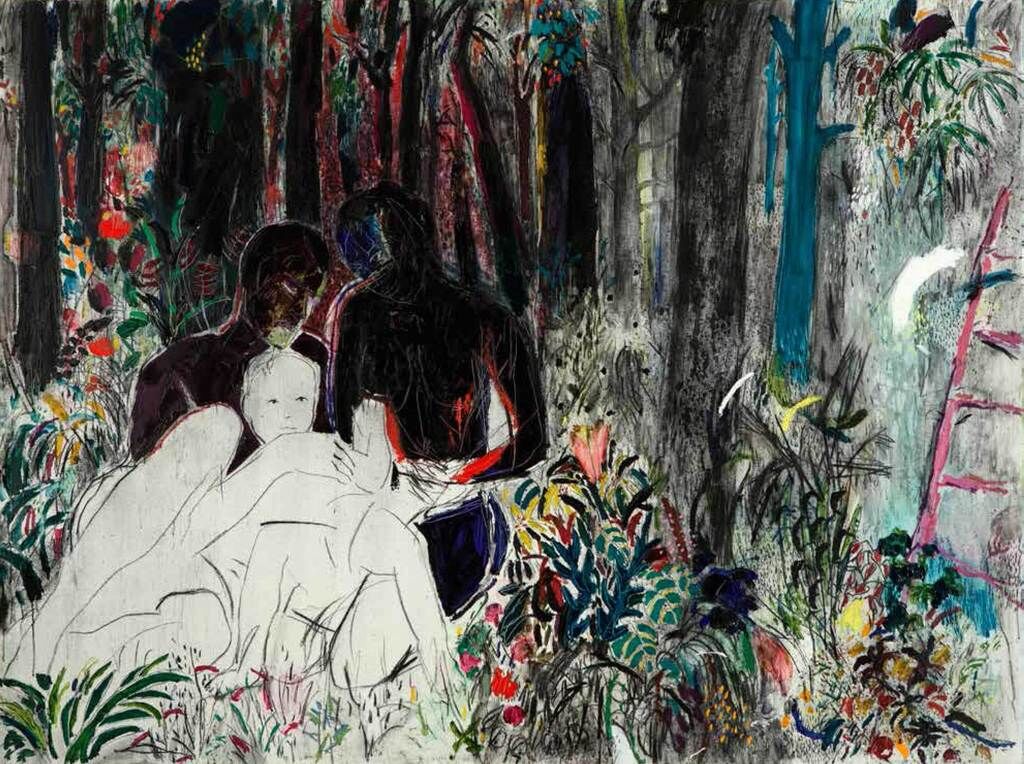 ABED AL KADIRI
Scene Number 12, 2018-2019
Galerie Tanit
The notion of much needed yet nonexistent governmental aid was brought up time and again by gallerists I spoke with. “Support from the Lebanese government to the local arts scene has always been minimal,” said Nadine Begdache, who established Galerie Janine Rubeiz in 1993, three years after the end of Lebanon’s 15-year civil war. “We think the government should cover the reconstruction fees of the galleries, art spaces, and artists’ houses that have been affected by the blast.”
Begdache continued: “We had never experienced anything like it, even during the long years of war, and we are still trying to wrap our heads around the size of the damage it caused to the city and to its people.” Although the gallery was spared from major destruction, all exhibition plans are temporarily postponed “in solidarity with the galleries that have been destroyed and until we have a clearer vision of how the situation will evolve in the country.” 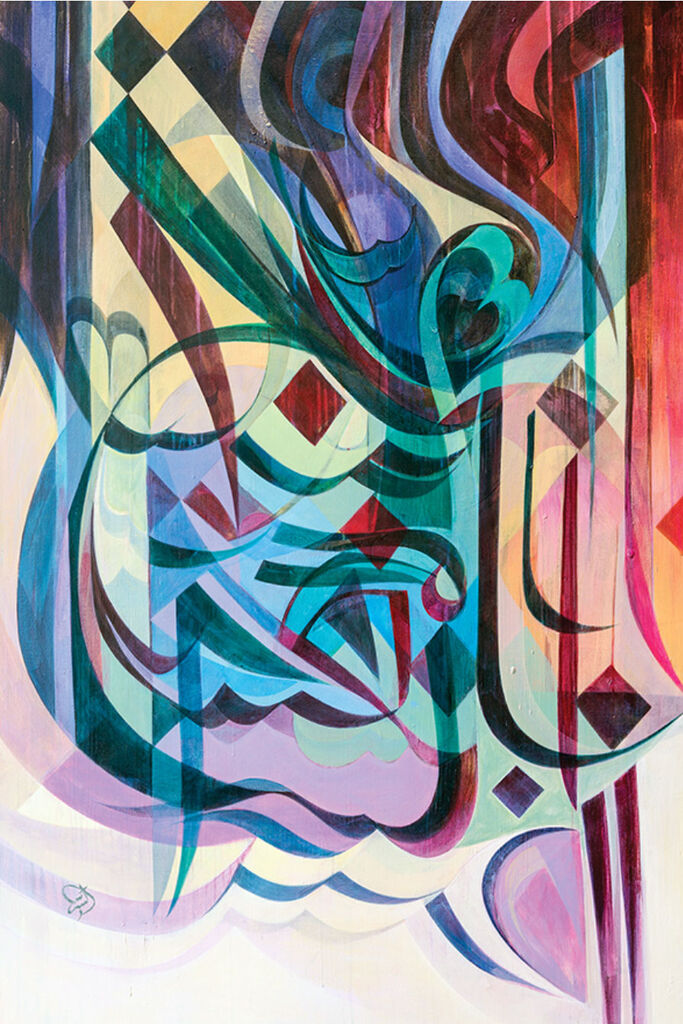 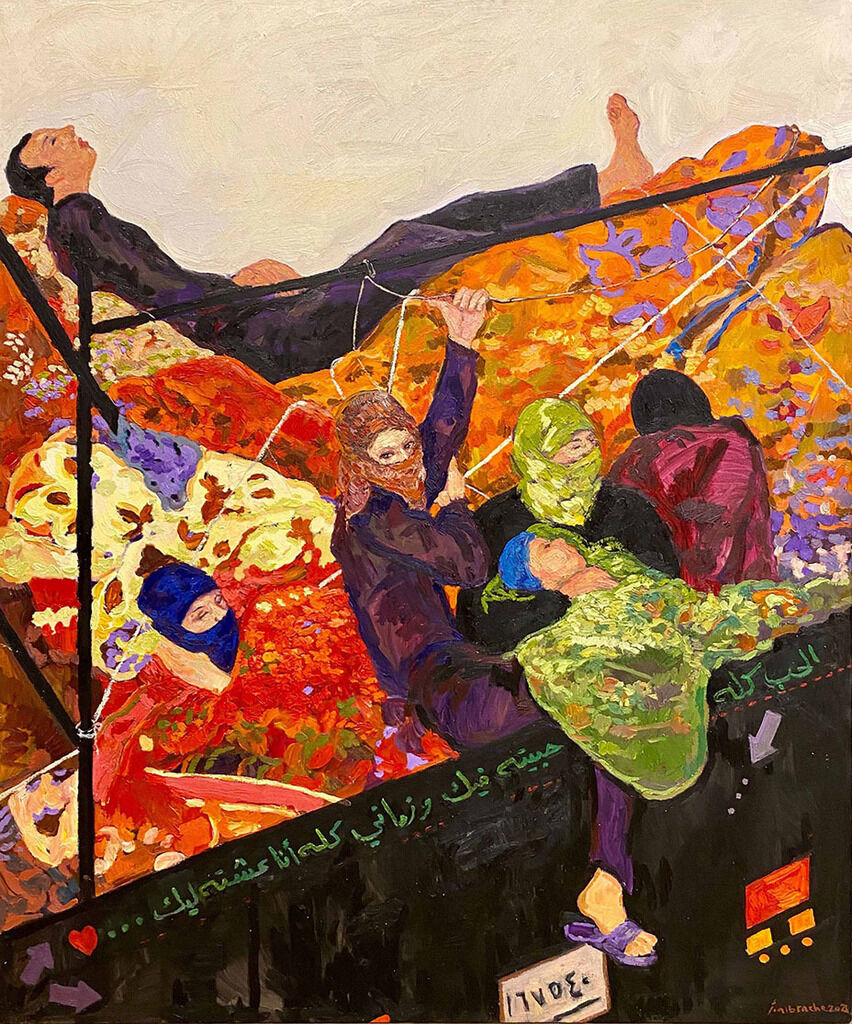 Anas Albraehe
Untitled, 2020
Agial Art Gallery
Another gallery that is trying to support its artists in this challenging time is Mark Hachem Gallery, based in downtown Beirut. In late August, the gallery launched an online exhibition on Artsy, “Bonjour Beirut,” highlighting paintings and sculptures that attest to Lebanon’s cosmopolitan artistic landscape from the 1960s onwards.
“What happened here was very horrible and unbelievable, it was like Hiroshima,” recalled representative Marianne Chalabi, who sought shelter in the gallery’s kitchen at the time of the explosion. “This will definitely affect how artists will produce art in the area. Our artists were already suffering from the economic crisis. Some of them lost their works and studios. As a gallery, it’s our duty to get up on our feet and promote our artists all over the world and online,” she explained, adding that clients have bought some of the works in “Bonjour Beirut.” 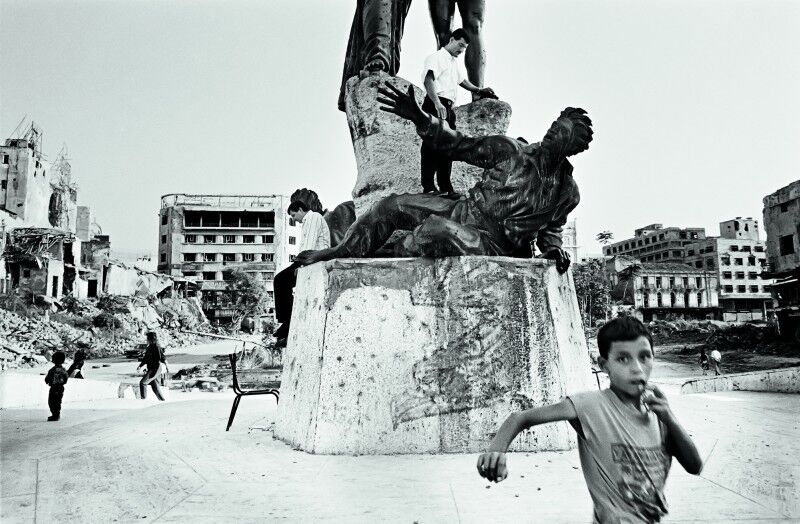 Samer Mohdad
Beirut Martys squares, 1991
Mark Hachem Gallery
A number of fundraisers have been initiated by nonprofits and initiatives, like the Arab Fund for Arts and Culture, the ALIPH Foundation, and Art Relief for Beirut, to aid those affected in the cultural sector. On a global scale, more than 20 organizations including UNESCO, the Louvre, and the International Council of Museums vowed to lend a helping hand in protection and restoration efforts.
“The international response has been amazing, I must say,” said Asseily. “But the change must come from inside the country, the government—and that’s what’s really difficult. You have to change the whole system, and that’s what we need.” 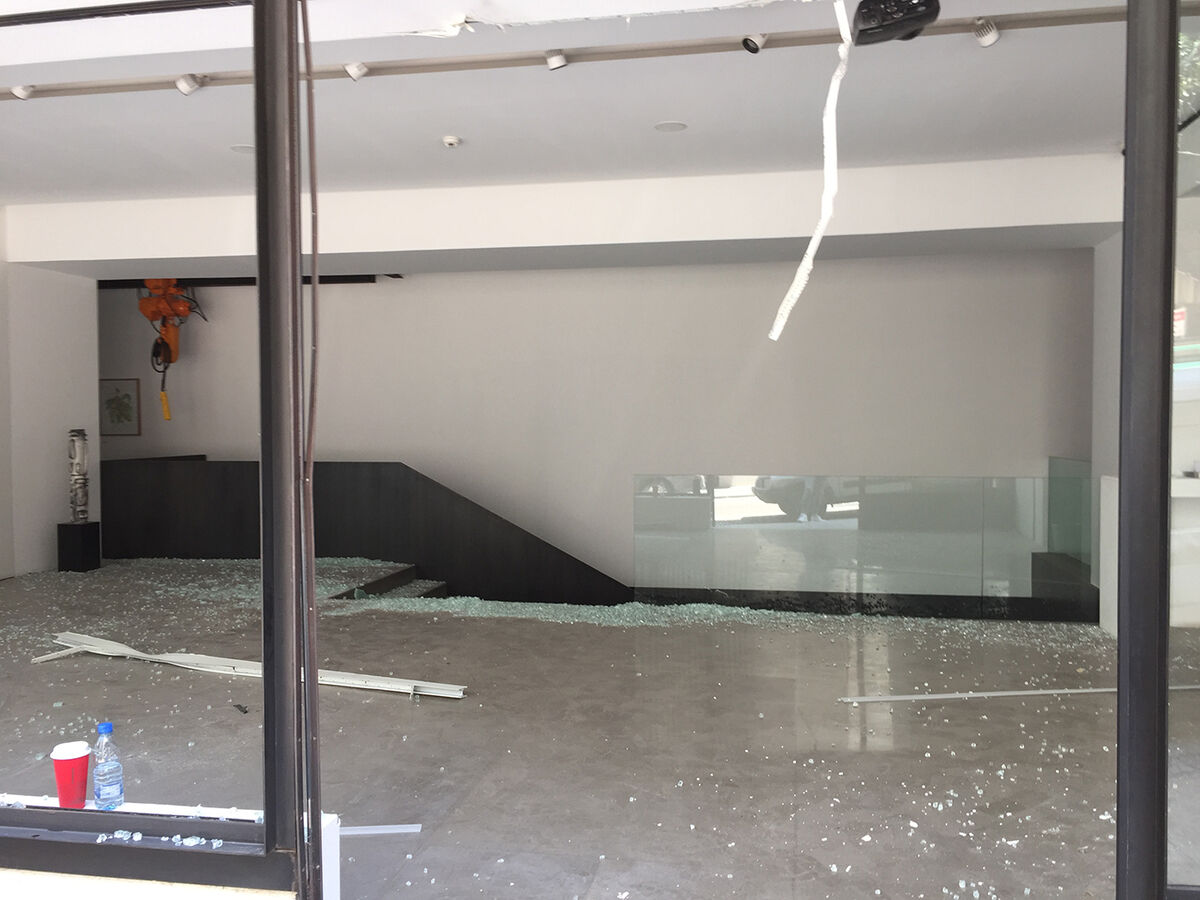 Change is key, and Asseily’s line of thinking was echoed by Saleh Barakat, who has been active in the local art scene for the past 30 years through his Arab art–specialized Agial Art Gallery & Saleh Barakat Gallery. “It seems to me that if there are no changes in Lebanon, it’s just a question of time before we get another hit,” he said. Aside from his galleries being littered with debris, Barakat tragically lost one of his employees—an art handler and logistician named Firas Dahwiche, who had worked with the gallery for two decades.
For many galleries in Beirut, the losses from the explosions are incalculable. The big question remains: What next? 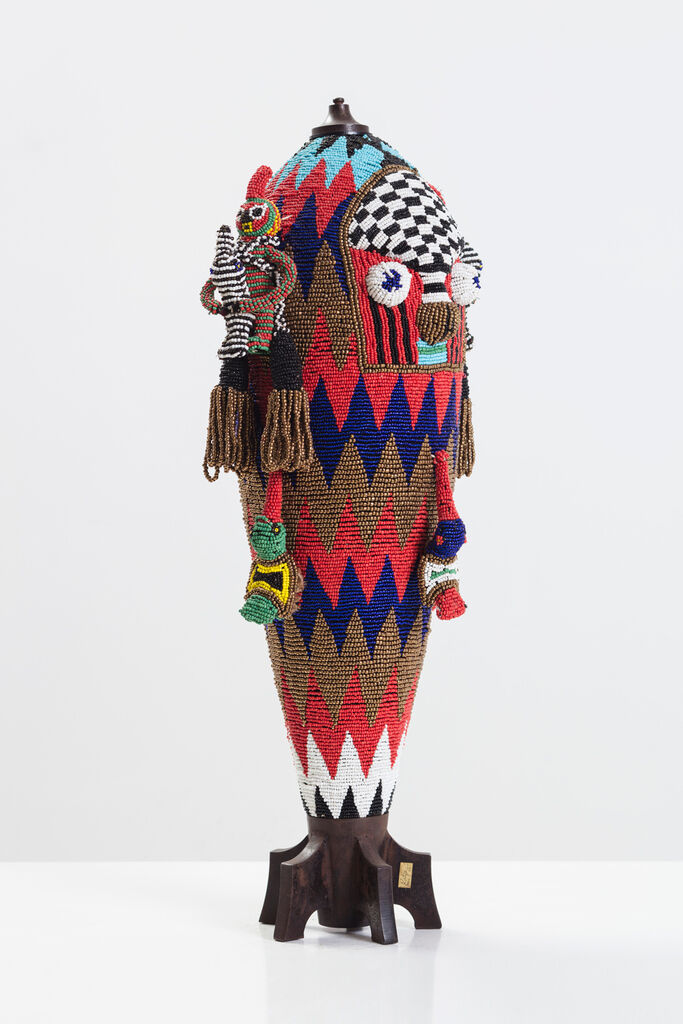 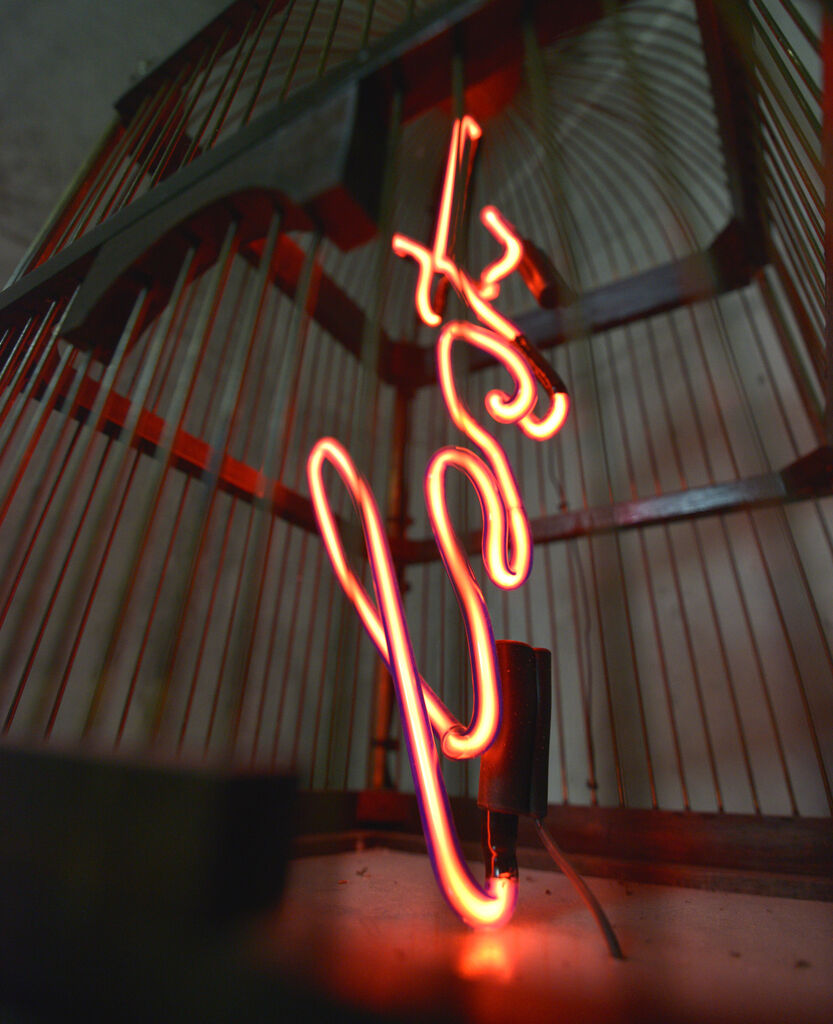 Olivia Steele
Lost (Bird Cage), 2017
Belvedere Art Space
As with any traumatic experience, recovery will take time, patience, and support. “We have to recover our spirit and find ourselves again,” said Kettaneh-Kunigk. Asked if she will reopen her gallery, Asseily was gently adamant: “We can’t stop—it’s very important to continue. One thing I’m sure of is that I will reopen—I can’t tell you when but I will reopen at the port.”
“We are a bit lost,” said Barakat, who hopes his galleries will be fully operational by late September. “Do we open our galleries as if nothing happened or do we do something very peculiar? There are two schools of thought and I represent the idea that we should start again and reopen. It’s part of our message that life goes on and we need to move forward.”
Browse a collection of works from Beirut galleries.
Rawaa Talass
Related Stories