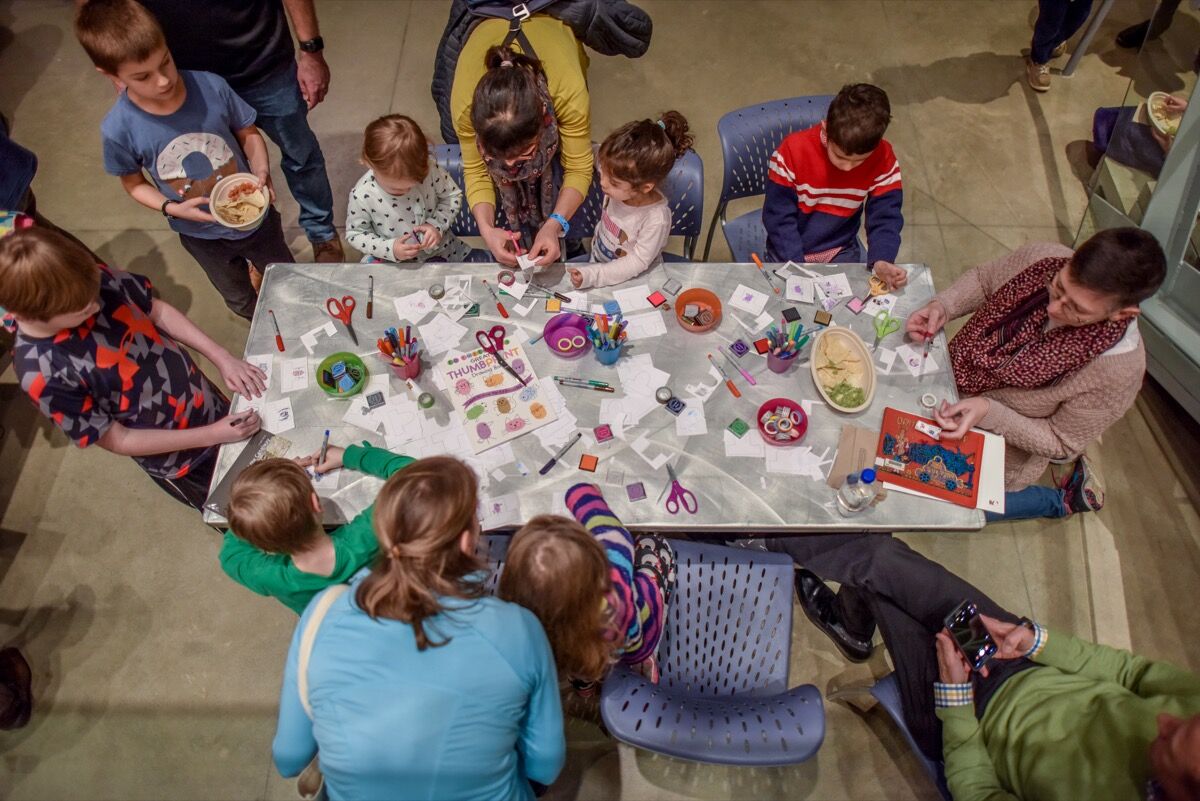 Courtesy of the Akron Art Museum.

Children’s book illustrator Ed Emberley is a firm believer in not taking art too seriously.
Case in point: While studying at the Massachusetts School of Art in the 1950s, he gained a reputation for dragging a papier-mâché dog around campus on a leash. “Some students reprimanded me for not being serious enough,” Emberley tells me during the opening of “Better You Than Me,” the delightful retrospective of his nearly 60-year career at the Akron Art Museum.
“I thought that was the funniest thing I’d ever heard—there’s nothing serious about this stuff!” he chuckles.
Emberley, who is now 86 years old, is still a jokester. He’s also one of the globe’s most successful children’s book illustrators—which is due in no small part to his playful, experimental approach to art.

Ed Emberley, Mockup pages with many finished faces from The Drawing Book of Faces, 1975. Courtesy of the artist.

His most popular books teach kids (and adults, if they’d like) how to draw through a refreshingly straightforward method. Emberley’s step-by-step instructions visualize how a diverse range of creatures, people, and objects can be created by using just a few shapes—and the occasional thumbprint.
In Ed Emberley’s Drawing Book of Animals, for instance, a small half circle transforms into a porcupine through the addition of a few staccato lines (for spikes), and a tiny dot (for an eye). In Fingerprint Drawing Book, fingertips dipped in paint and pressed to paper become butterfly wings, tadpole torsos, and snail shells.
Emberley has made 22 of these drawing books over the course of his career, many of which remain in print today. Drawing Book of Animals, for its part, has sold over a million copies since it was first published in 1970. He’s also written and illustrated mesmerizingly beautiful children’s storybooks, like Drummer Hoff, which won the prestigious Caldecott Medal in 1968.
As a whole, his work has inspired the likes of fashion designer Todd Oldham and street artist Caleb Neelon—not to mention countless children across the globe. 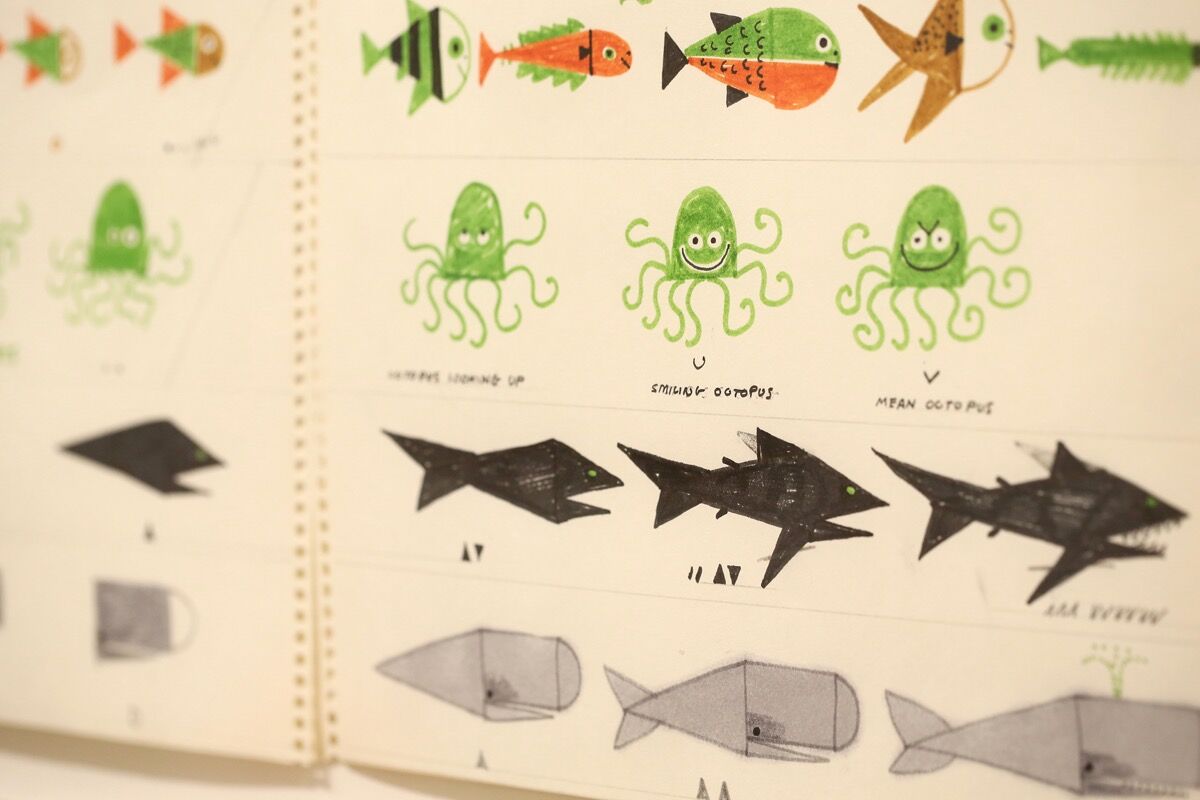 Ed Emberley, Mockup page about octopi from The Drawing Book of Animals, 1970. Courtesy of the artist.

Advertisement
Despite the popularity of his books and a loyal following, though, Emberley admits that he’s surprised by his success. And he plays coy if you ask what inspired his career in illustration. “I still don’t know,” he answers, mischievously. His background, however, tells a different story.
Emberley was born in 1931 in Malden, Massachusetts and was raised in Cambridge—“a city boy,” as his wife and collaborator, Barbara Emberley, has called him. From a young age, he was surrounded by makers: His father and grandfather were both carpenters, and his mother was a dressmaker.
The family didn’t have money for newfangled toys, but there were always pencils and paper around the house, and Emberley’s grandmother would occasionally give him a box of his grandfather’s scraps: small wooden triangles. “I had a hell of a time, could play with that for hours, lining them up, making shapes out of them,” he’s said of the DIY blocks.
He went on to study traditional figure painting, sculpture, and etching at Massachusetts School of Art—but it was illustration that he liked best. After graduating, he made ends meet by working as a freelance direct-mail illustrator, which entailed sending illustrations to greeting card companies, children’s magazines, and religious newsletters, and receiving payment by post in return.
It wasn’t until he came across a copy of a 1950s handbook for professional artists, however, that Emberley decided to make his first book. “It said that children’s books sold, so I decided to try it,” he remembers.

Ed Emberley, The Great Thumbprint Drawing Book, mockup page of the cover, 1977. Courtesy of the artist.

Soon after, in 1960, he delivered a draft of The Wing on a Flea: A Book about Shapes to Boston-based publisher Little, Brown. It was a story about a child who sees that everything in the world, from mountains to treasure maps, is made up of shapes. “A triangle is / The wing on a flea / And the beak on a bird / If you’ll just look and see,” he describes, on one page. The book encouraged readers to look at the world creatively, as a sum of shapes and colors.
After it was released, in 1961, The Wing on a Flea was placed on the New York Times list of best illustrated books. It also jump-started Emberley’s career—over 100 children’s books would follow.
Emberley’s Akron Art Museum exhibition (which follows a show at the Worcester Art Museum, where it was the artist’s first retrospective) brings together all of Emberley’s greatest hits, along with the sketches and original drawings that seeded them. 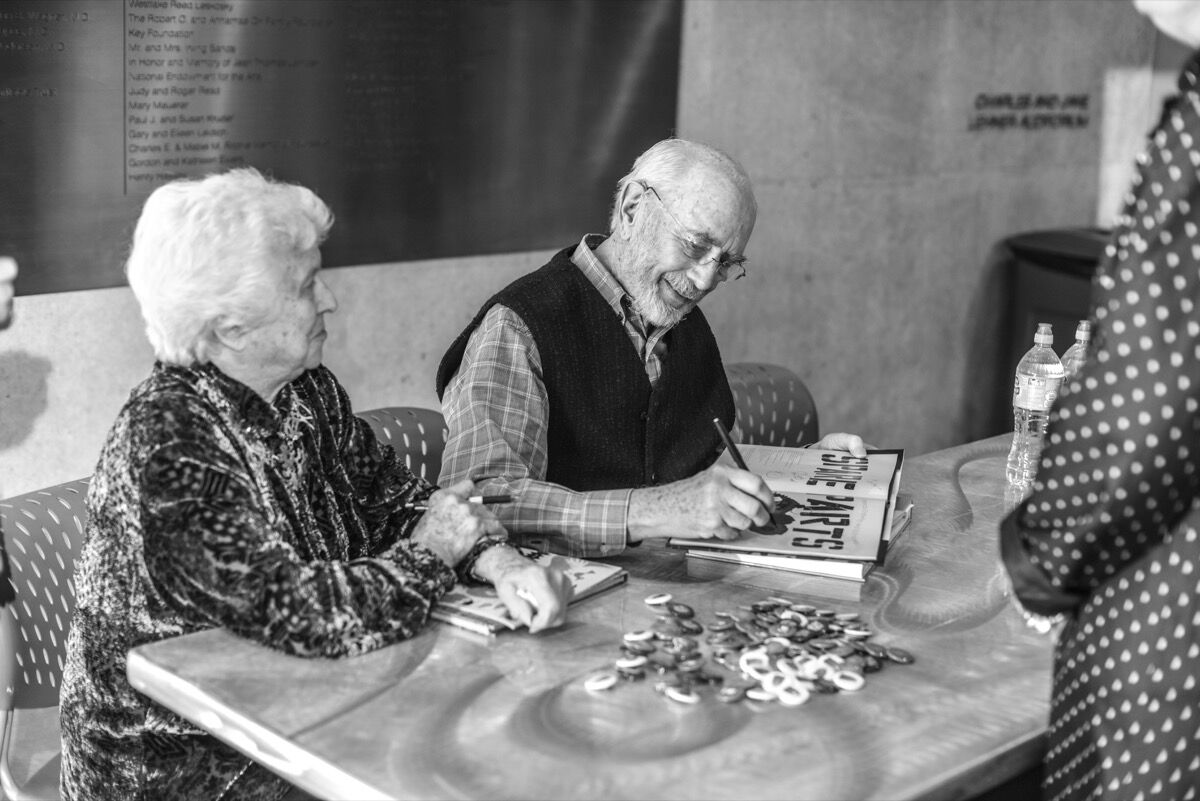 Courtesy of the Akron Art Museum.

Neelon, who curated the show, describes Emberley as “restlessly creative.” This quality becomes visible across the show; drawings, mock-ups, and completed books (which visitors can page through) reveal the artist’s endless desire to experiment with different styles and methods.
In the famed storybook Drummer Hoff (1967), which was written by Barbara Emberley, the artist used woodcuts to illustrate the narrative, in which a group of soldiers prepare a cannon. The characters are rendered in bright colors and boast distinctive traits (an eye-patch, a very elaborate moustache, uniforms dotted with medals).
The Wizard of Op (1975), on the other hand, takes a completely different tack. Through black-and-white, cartoonish drawings, Emberley pictures a wizard going about his day. Every time he casts a spell, the page erupts into a psychedelic sea of
Op Art
-inspired patterns. And in Suppose You Met a Witch (1973), which Neelon refers to as Emberley’s “10-minute guitar solo,” the artist renders the story of an evil hag, named Grimblegrum, with hyper-detailed compositions that resemble trippy 1960s rock music posters. 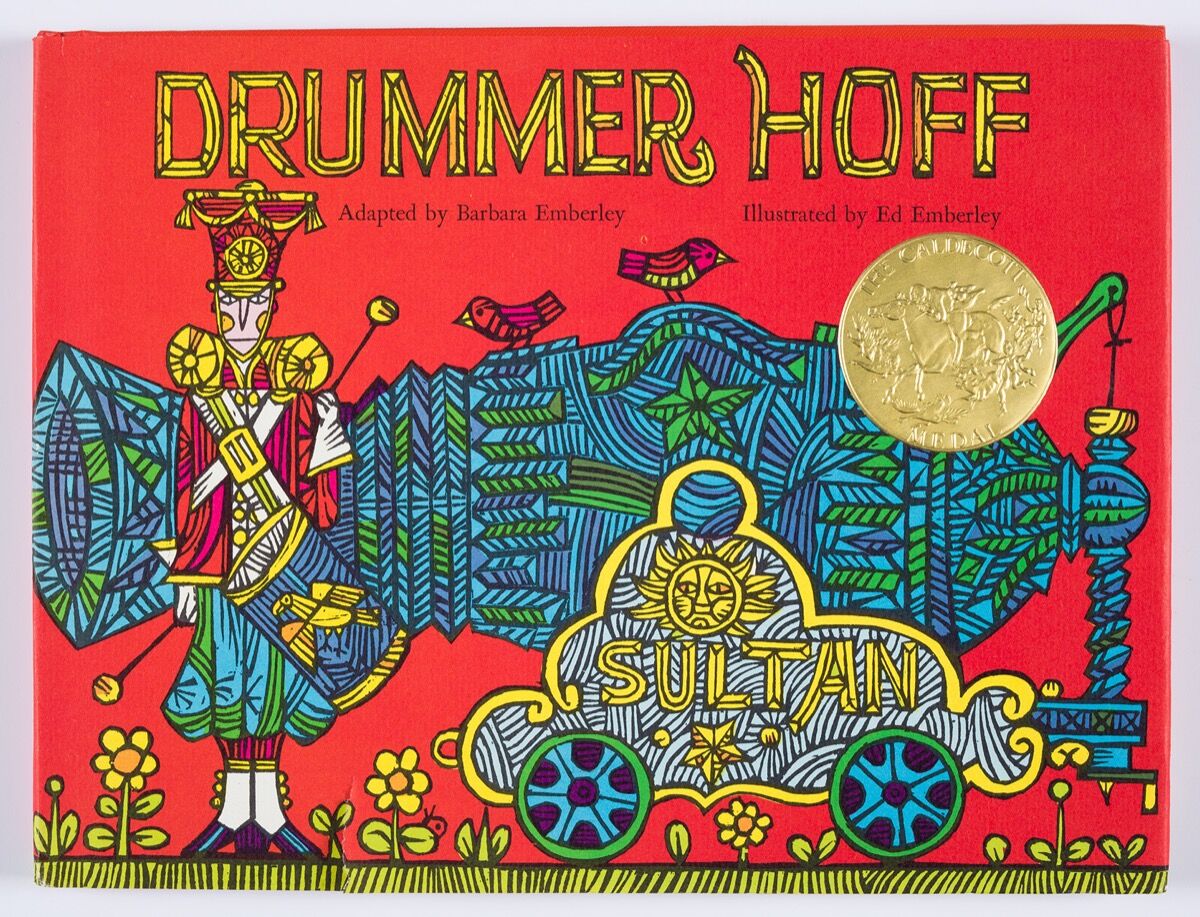 But as detailed and shape-shifting that Emberley’s storybooks are, they contain a common thread. The basic building blocks of illustration, which Emberley gives aspiring artists in his drawing books, are visible in all of them. Even the intricate Grimblegrum, and the explosive spells of the Wizard of Op, are made from a puzzle of shapes.
It’s this method—of building worlds and characters with an accessible toolbox of basic lines and forms—that Emberley reveals across his oeuvre, but generously breaks down for us in his drawing manuals.
The books make drawing not only easy—but fun. That’s because Emberley doesn’t just teach you how to draw a porcupine of a person, he shows you how to give them life and personality, too. With slight, simple tweaks, a porcupine can fall asleep and even perform funny acrobatics, or a circle can transform into the bald head of your favorite grandparent.
Emberley turns artmaking into something both accessible and joyous. After all, as Emberley always says, “Not everyone needs to be an artist, but everyone needs to feel good about themselves.”
Alexxa Gotthardt
Related Stories