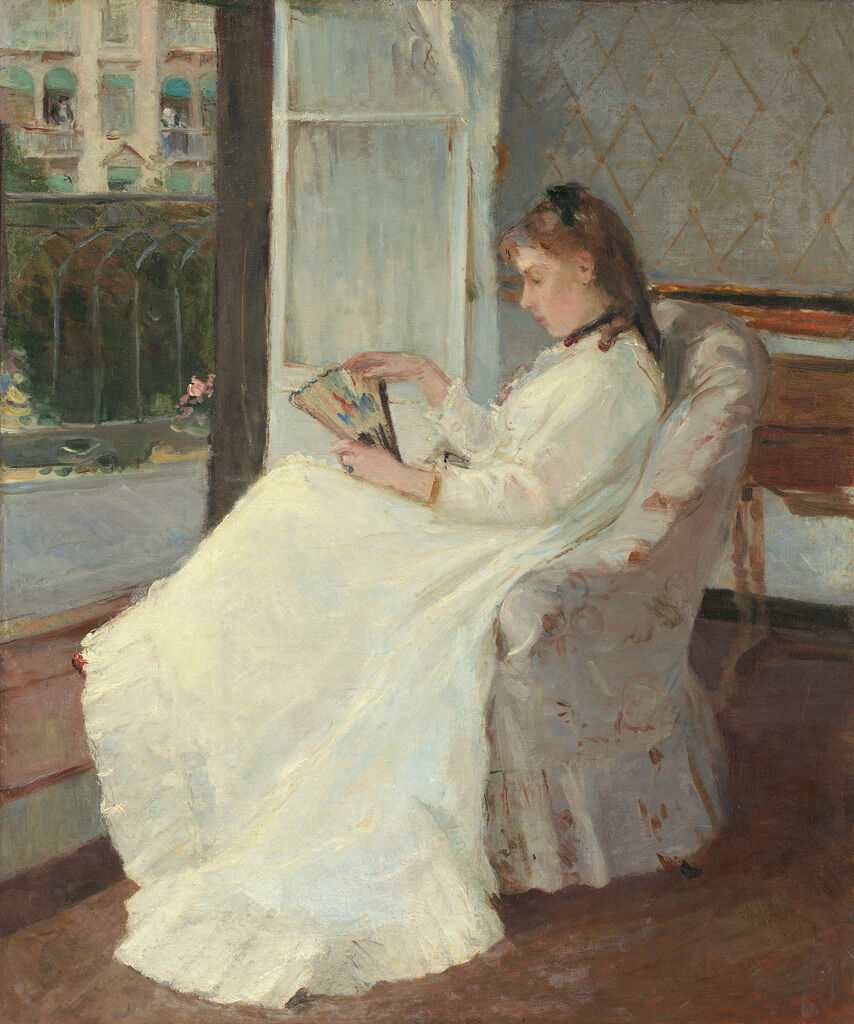 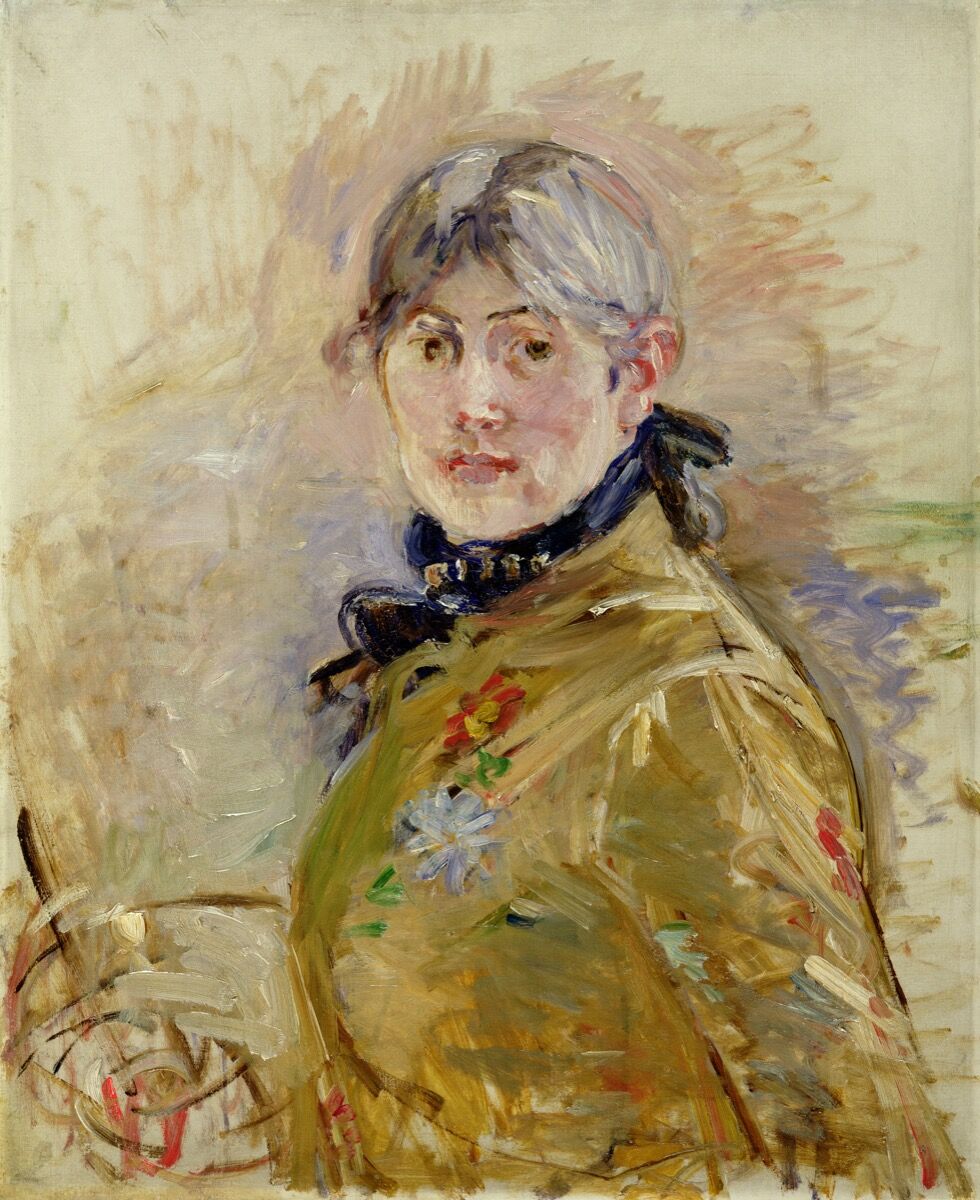 Berthe Morisot, Woman at Her Toilette, 1875–1880. Courtesy of The Art Institute of Chicago / Art Resource, NY.

When
Berthe Morisot
—a founding member of the French
Impressionists
—and her husband commissioned the construction of a new Parisian home in 1883, she didn’t ask the architect to include a studio in the blueprints. The elegant apartment at 40 rue Villejust had rooms that wrapped around a salon with 16-foot-high ceilings and lofty street-facing windows, but no designated space for the painter to layer canvases with her brazen, loose brushwork. Instead, Morisot asked the architect to build her a discrete closet—a concealed space where she could hide her paint tubes and brushes when guests came over, so as not to disrupt the decor of her haute bourgeois home.
By all accounts, Morisot was an established artist by this point. Her work had been accepted to the juried Paris Salon multiple times, and she had already participated in seven Impressionist exhibitions. (Morisot, following an invitation from
Edgar Degas
, was the only female artist included in the initial Impressionist show.) Yet she painted with a hobbyist’s habits—without a reserved room of her own, careful not to splatter oil paint on her Empire-style furniture. Further complicating matters, Morisot was married to Eugène Manet, the younger brother of revered 19th-century modernist painter
Édouard Manet
, whose reputation cast a long shadow over her own. 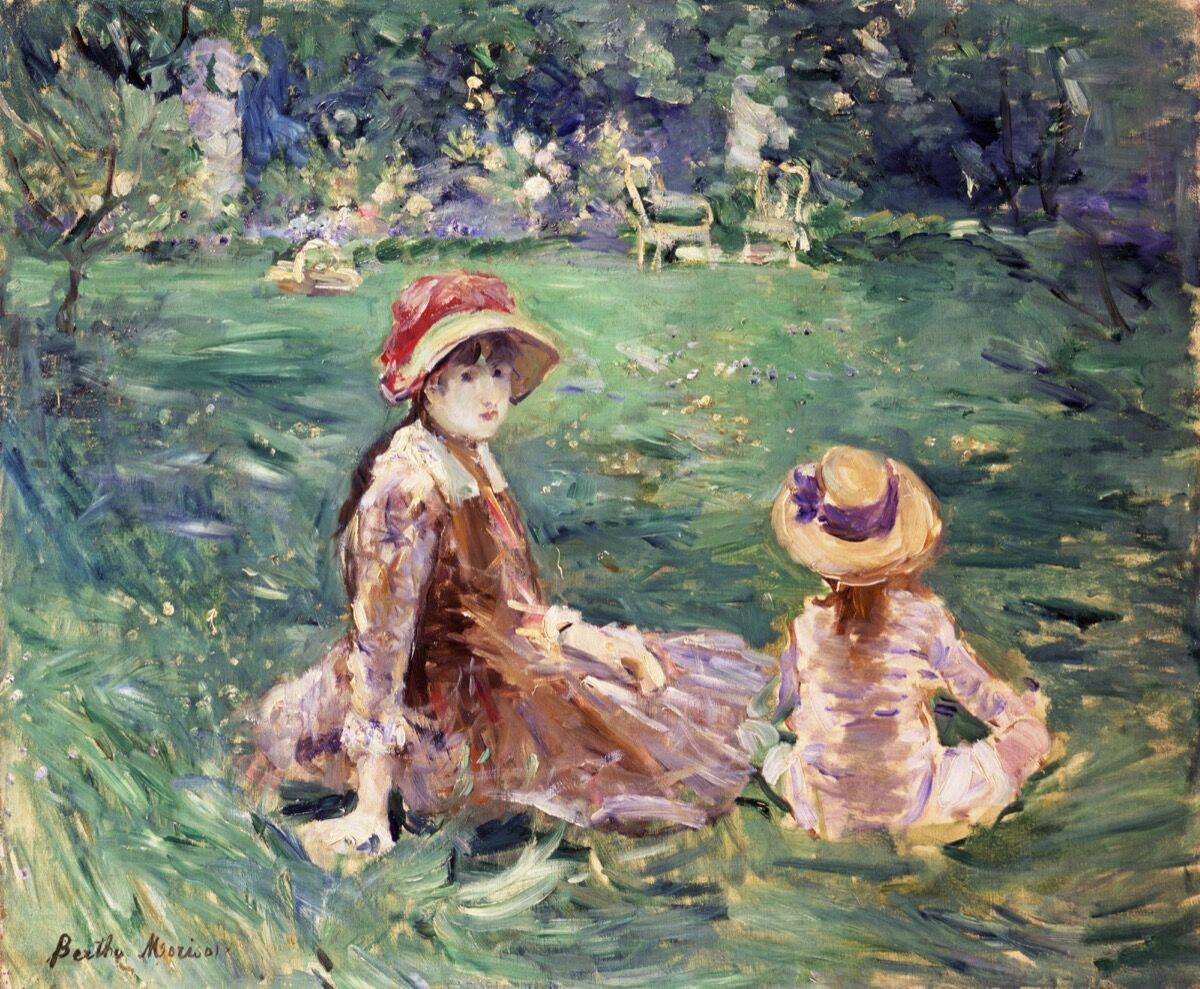 Berthe Morisot, The Garden at Maurecourt, ca. 1884. Courtesy of the Toledo Museum of Art.

“Morisot resided in this hybrid space that she created for herself,” Cindy Kang, a curator at Philadelphia’s Barnes Foundation, writes in the catalogue for “Berthe Morisot: Woman Impressionist,” a traveling exhibition now on view at the museum. She followed “neither the conventions of the amateur female nor those of the professional male artist.”
Her dual identities as both an upper-class society woman and a professional painter tethered the tightrope that she walked throughout her career. Over time, the dizzying dichotomy led Morisot to devalue her own work, and it has also negatively affected her footing in art history.
“She has never been taken as seriously as the other Impressionists,” Sylvie Patry, co-curator of the Barnes exhibition, explained in an email to Artsy. “Her subject matters, focused on domestic activities, motherhood, and children, have been regarded as a mere expression of her gender, but rarely considered as modern topics or depiction of a new urban bourgeois lifestyle.” 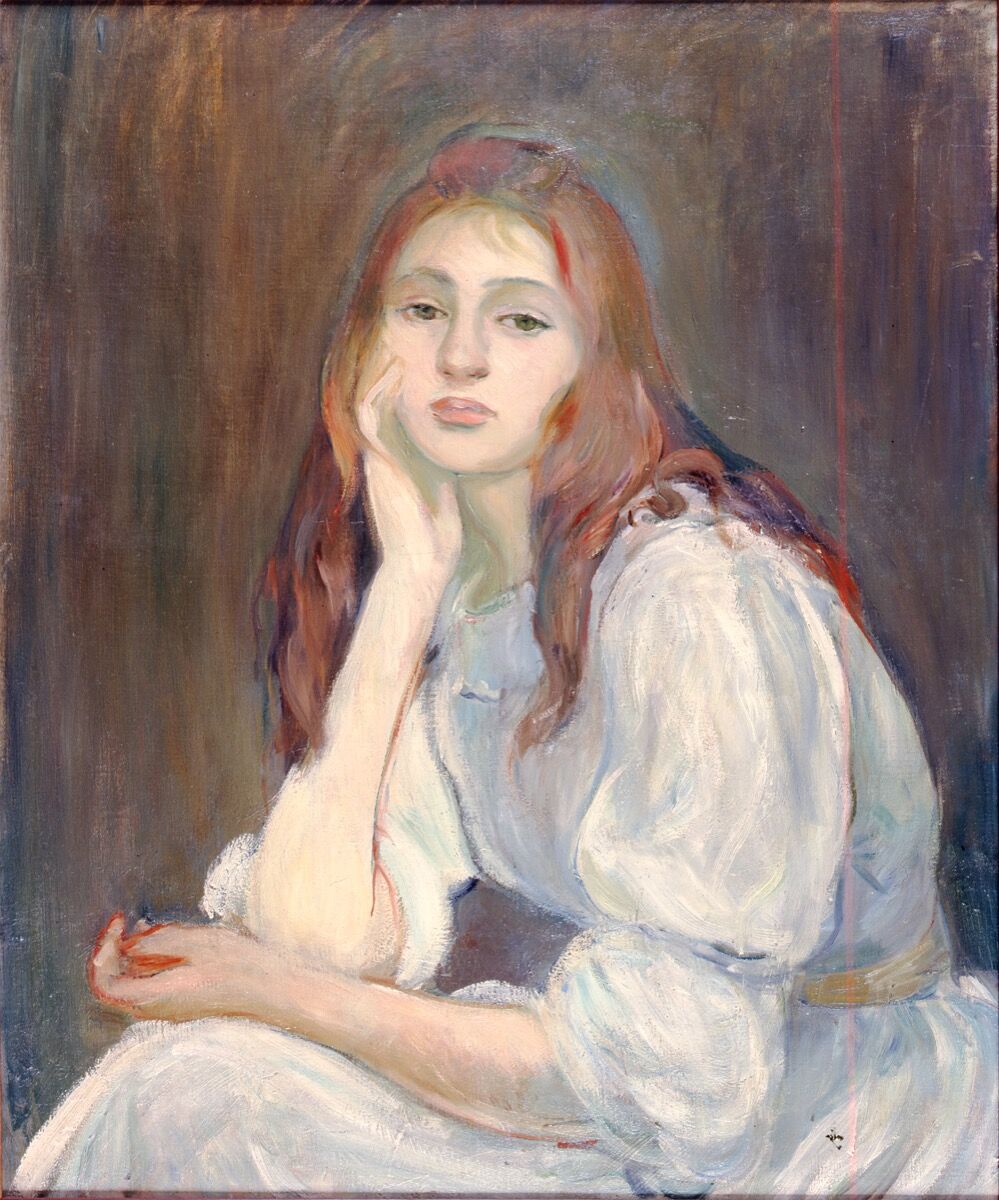 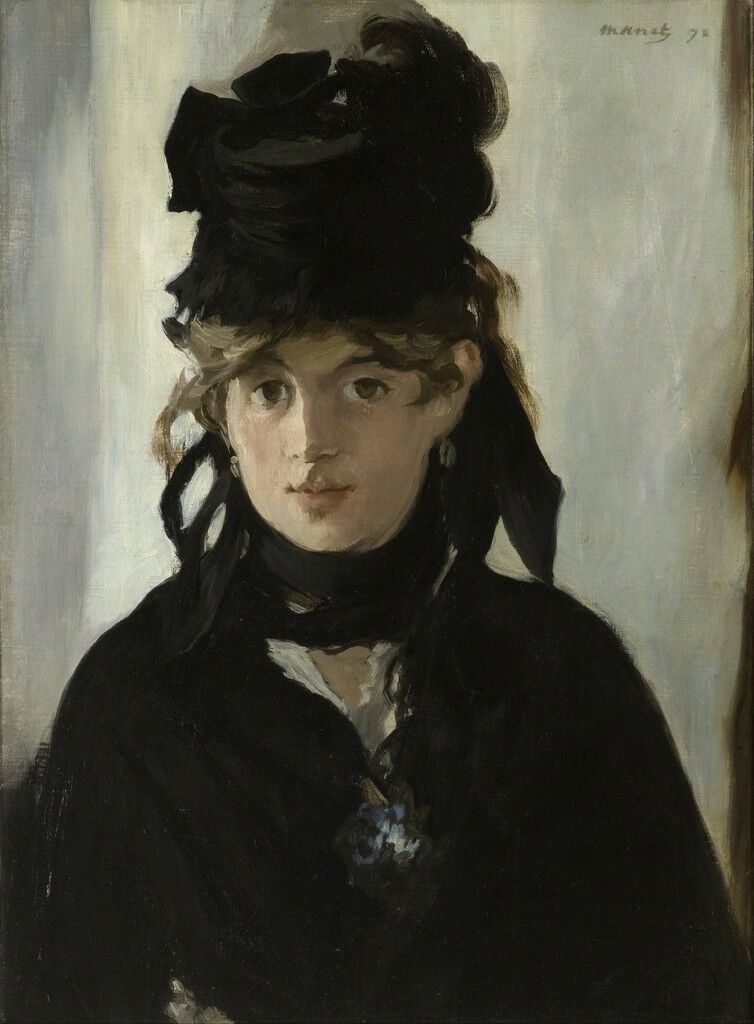 Édouard Manet
Berthe Morisot with bouquet of violets, 1872
Musée d'Orsay, Paris
Advertisement
These motifs have much to do with Morisot’s sidelined status. Peers like
Claude Monet
and
Pierre-Auguste Renoir
were painting popular sites of leisure around Paris that she, as an upstanding socialite, couldn’t frequent without a male chaperone. So Morisot turned to capturing women and children in domestic interiors, ladies in parks, and, in nearly a third of her canvases, her daughter, Julie. Morisot painted what some have considered superficially charming and delicate themes, but the radicality of her interpretation is often overlooked. She approached these subjects from a distinctly female perspective, using gestural brushstrokes that verge on abstraction, the outer edges of the canvas often left completely unfinished.
Morisot took on subjects that her male peers considered second-rate, such as maids and house servants, and positioned them center stage. “In the paintings of her male colleagues, domestic servants often appear almost as staffage figures,” explained Nicole R. Myers, co-curator of “Woman Impressionist,” in an interview with Artsy. “They’re rarely the unique, individual subject—the reason for the painting itself—as they are in Morisot’s paintings.”
She also depicted wet nurses, standard hired help among upper-middle-class French families at the time. As the late feminist art historian Linda Nochlin once pointed out, Morisot’s 1879 painting The Wet Nurse Angele Feeding Julie Manet “embodies one of the most unusual circumstances in the history of art—perhaps a unique one, a woman painting another woman nursing her baby.” Such works might look like a tame Impressionist version of the classic
Madonna and Child
theme, but poignantly illustrate that for many women—Morisot and the wet nurse included—professional work and the often-unrecognized domestic labor of motherhood aren’t always mutually exclusive. 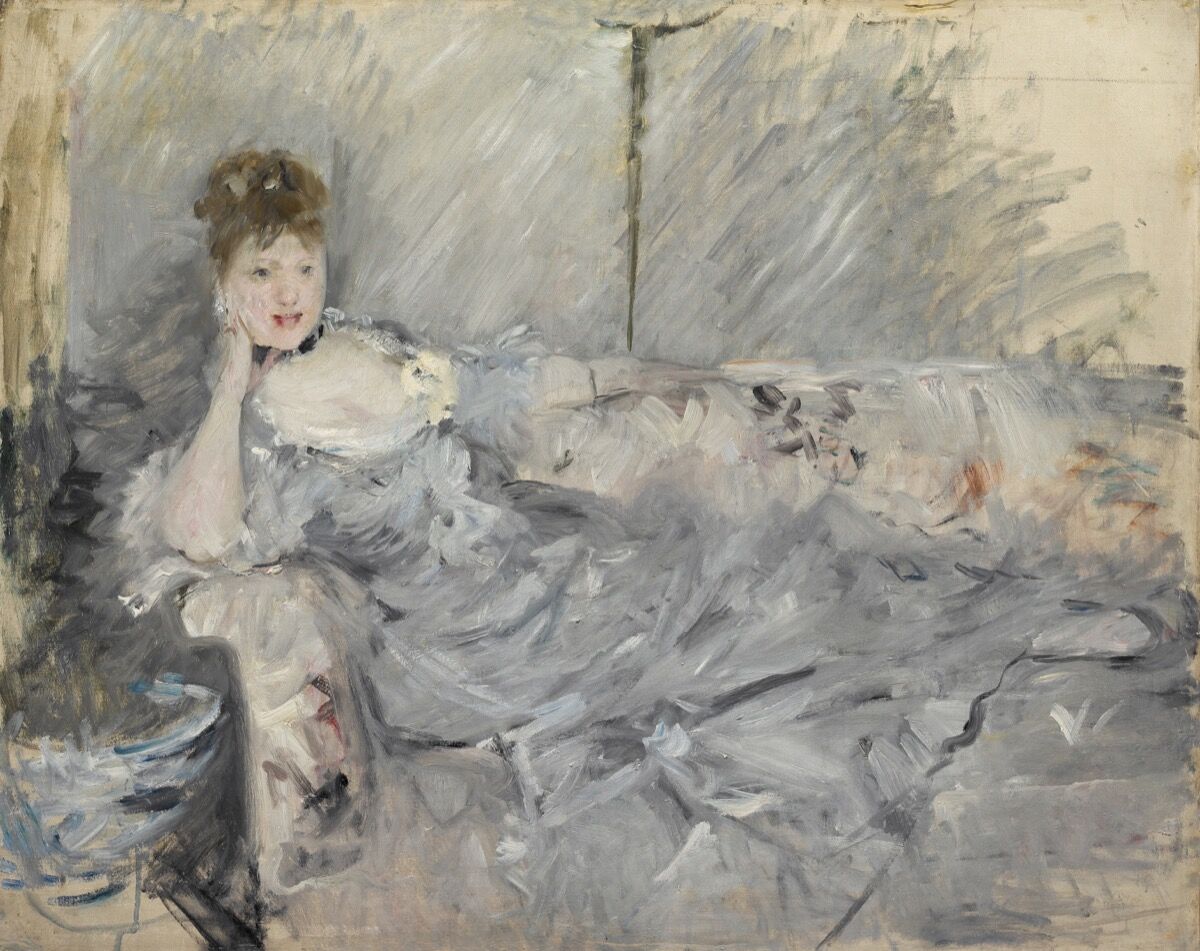 Another traditional theme that Morisot turned on its head was that of the toilette—women’s rituals of bathing, fixing their hair and makeup, and getting dressed. For male artists, this genre usually served as an excuse to show ladies in various states of undress, often bent over, with ample views of tantalizing cleavage. The emphasis in Morisot’s paintings, though, is instead on the subjects’ internal experiences. “The focus of the women doesn’t seem to be on the outside world at all,” Myers noted. “There’s a lot of self-absorption, and you could say introspection, which are themes you find all throughout her depictions of women.” Just when Morisot’s semi-nudes might seem to invite an erotic gaze, her rough brushwork deflects any attempt at a solid look. Their sensuality lies in her handling of the unctuous paint, not in the figures themselves.

4 Images
View Slideshow
Despite her innovations and exhibition successes, in the end, how Morisot defined herself was as nebulous as her brushstrokes—barely delineating the space between the figure and her setting. Morisot sold only around 30 paintings during her lifetime. Since she was in the privileged position of not needing to support herself with sales, she parted with these at below-market rates. Of the 850 paintings, pastels, and watercolors she produced by the time of her untimely death at age 54, the majority remained in her family’s collection. 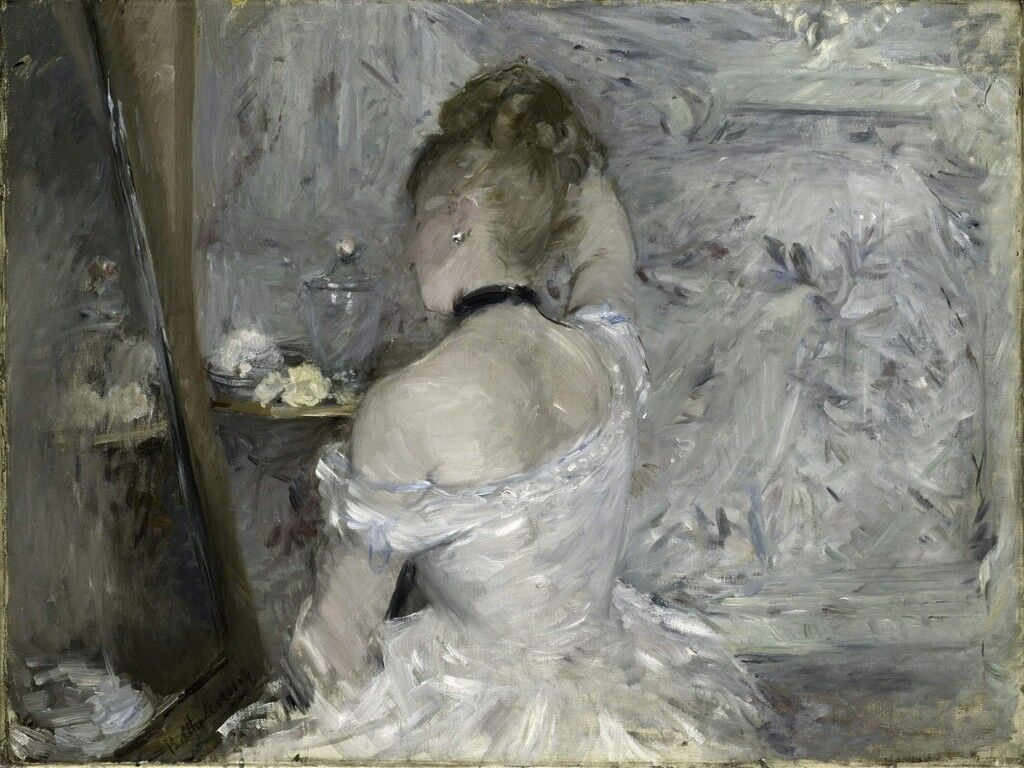 Berthe Morisot
Woman at her Toilette, 1875 -1880
Art Institute of Chicago
“It looks as though I am coming to the end of my life without having achieved anything and only selling my work at bargain prices,” Morisot once lamented in a letter to her sister Edma, who received artistic training with Berthe, but gave up painting when she married. “It is terribly depressing.”
On her death certificate, Morisot was listed as being “without profession.” Her artistic identity has also been omitted from the street on which she lived and worked, which was renamed after the French poet and philosopher Paul Valéry, who married Morisot’s niece and lived in the house she built. Valéry’s 1926 essay “Aunt Berthe” equated Morisot’s paintings with the feminine 19th-century practice of journal-keeping, perpetuating a quaint, amateurish view of the pioneering artist.
But Morisot was no amateur; her contributions to art history are slowly re-emerging, revealing views of the feminine mundane that have been flipped and turned on their head in masterful strokes of pink and gray paint.
Karen Chernick
Related Stories 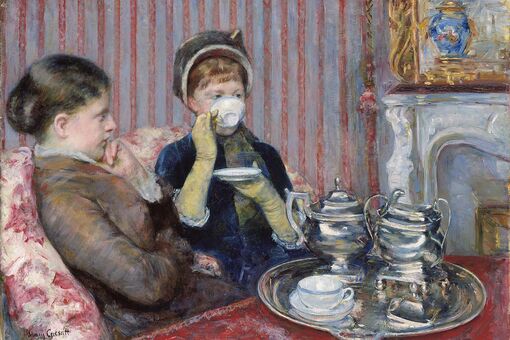 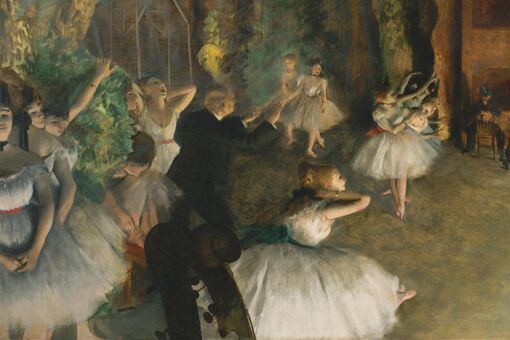