Bid Like a Millionaire Collector at This Off-Broadway Play 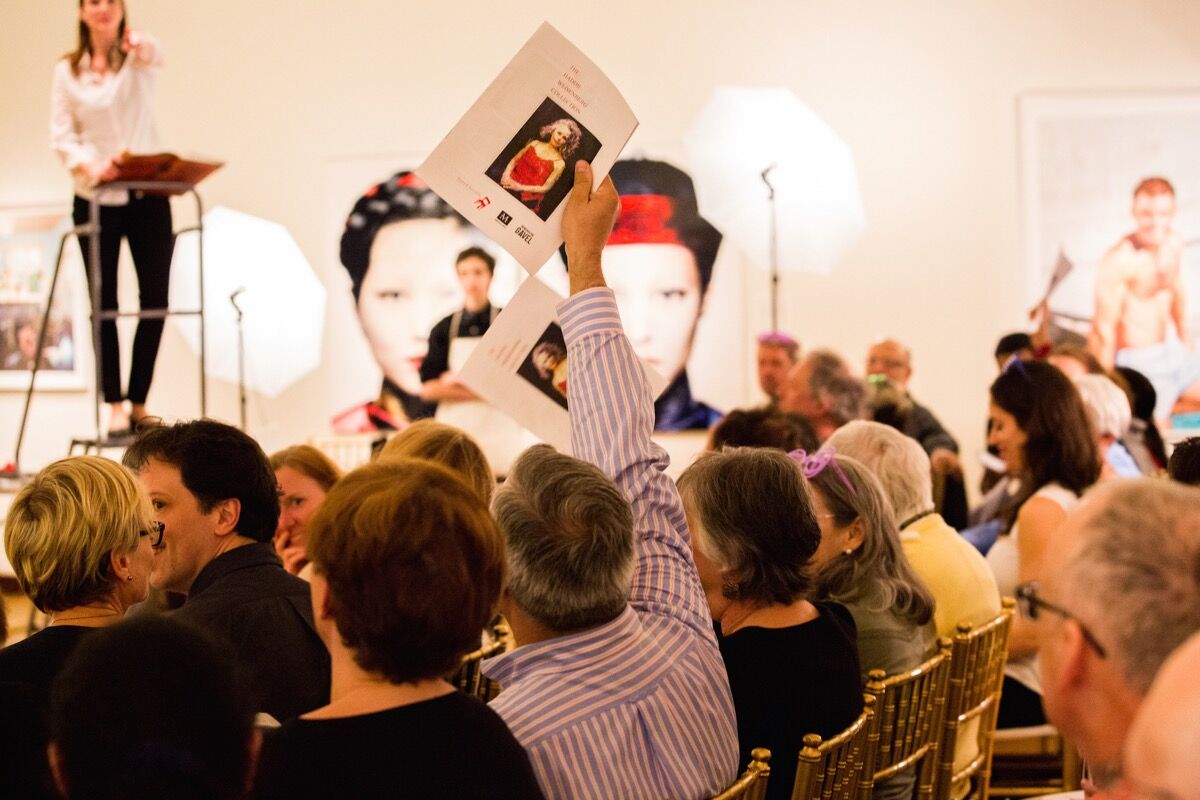 Audience bidding at a performance of “Beneath the Gavel” held at the New Britain Museum of American Art in Connecticut. Photo by Will Gangi.

One day in 2000, Philippe Ségalot, at the time head of contemporary art at Christie’s, was crowing about an ostrich.
The ostrich, he informed then-director of auction operations Barbara Strongin, was stuffed by none other than Italian conceptual artist
Maurizio Cattelan
. And it was among the lots that would be offered at the next Christie’s contemporary evening sale in New York.
But before Cattelan’s Untitled (1997) hit the auction block, it would need to go on display at Christie’s in-house gallery. For that to happen, Ségalot told Strongin, they needed to drill a hole for the ostrich’s head to dip beneath the floor.
“How deep?” Strongin asked.
“Two feet,” Ségalot responded.
“Philippe,” Strongin shot back wryly, “we have two inches of wood, five inches of concrete—and then we hit Simon & Schuster in the basement.”
It’s a scene that is undeniably theatrical—and, fittingly, it features prominently in the play “Beneath the Gavel,” which had its New York City debut at 59E59 Theaters last week. Strongin served as a consultant for the show, mining her 36 years of art auction experience (including 26 at Christie’s) to fine-tune its portrayal of the art market. 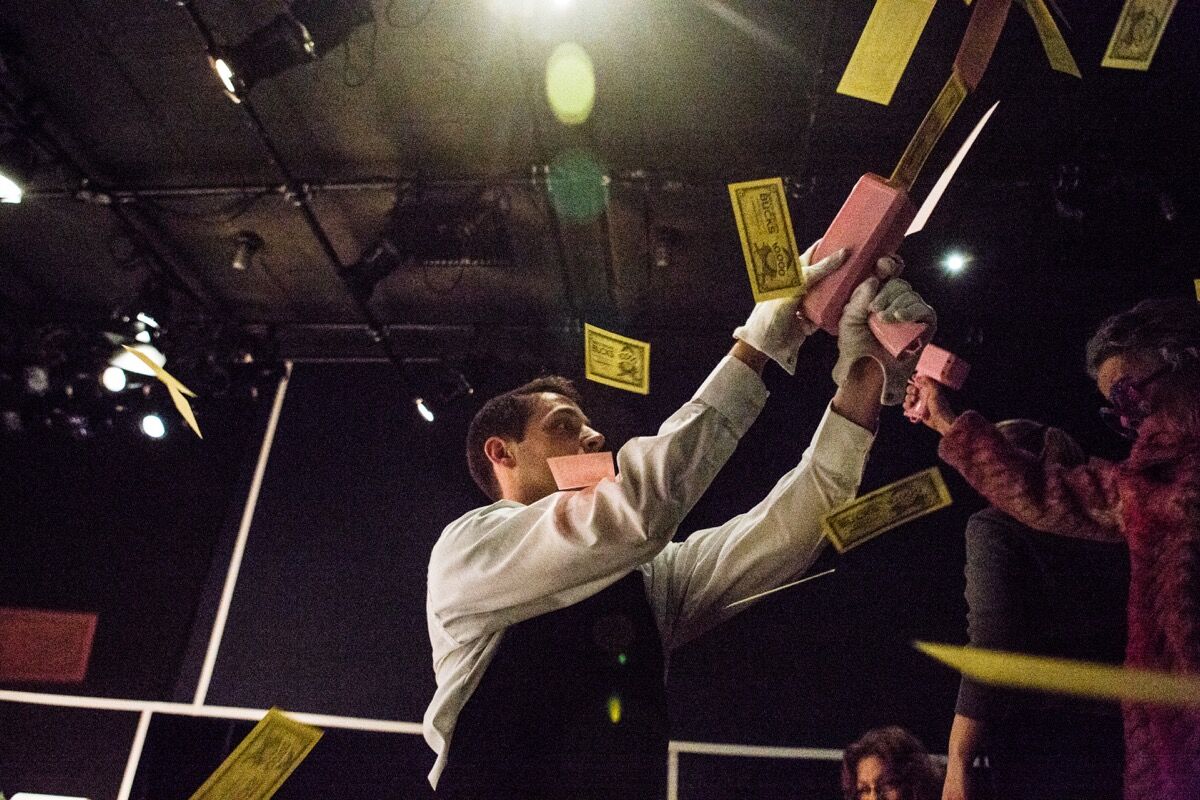 Sean Hinckle in “Beneath the Gavel” at 59E59 Theaters. Photo by Will Gangi. 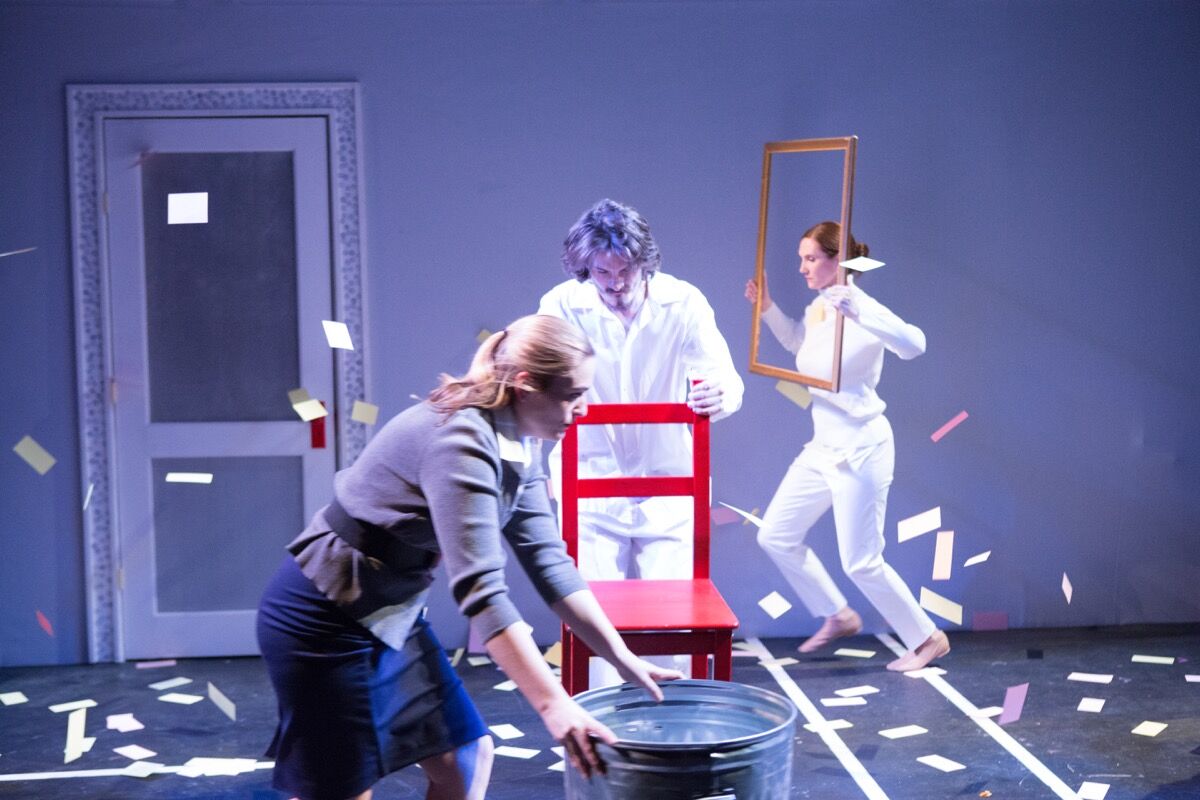 Moira O’Sullivan, Corey Finzel, and Melissa Burmeister in “Beneath the Gavel” at 59E59 Theaters. Photo by Will Gangi.

Although the production delves into everything from consignments to the rise of Gagosian, its centerpiece is an interactive auction wherein audience members have the chance to bid on contemporary works from the collection of renowned (and fictional) art patron Haddie Weisenberg. Strongin, a long-time auctioneer trainer, coached actress Missy Burmeister through these scenes as she would any other beginner.
“At first, she was doing what every new auctioneer does, which is to just repeat the increments,” Strongin said. “You’ve got to tell the story. You’ve got to be that mix between a sports announcer and a flight attendant.”
As Strongin explained, the key is to stir up competition. Phrasing matters. For example, “The lady’s bid on the aisle is against you, sir” incorporates language that pits the two bidders against each other to encourage higher stakes. During a performance on Thursday, Burmeister sold the work Haddie Without Shawl for a respectable $3 million (paid for with paper bills showered over the audience at the beginning of the play).
“Beneath the Gavel” is the work of Bated Breath Theatre Company, a Hartford, Connecticut-based group focused on bringing theater into art-world spaces. Many of their performances, like 2012’s Toulouse-Lautrec Project at Hartford’s Wadsworth Atheneum, also draw inspiration from the art-historical canon.
“I have been very concerned about the declining audiences in the theatre and in museum spaces, and I thought the cross-pollination might revive that decline in some small way,” Mara Lieberman, Bated Breath’s executive artistic director, told American Theatre. “It’s been really interesting because when we do an event at a museum, we really pack the house.” 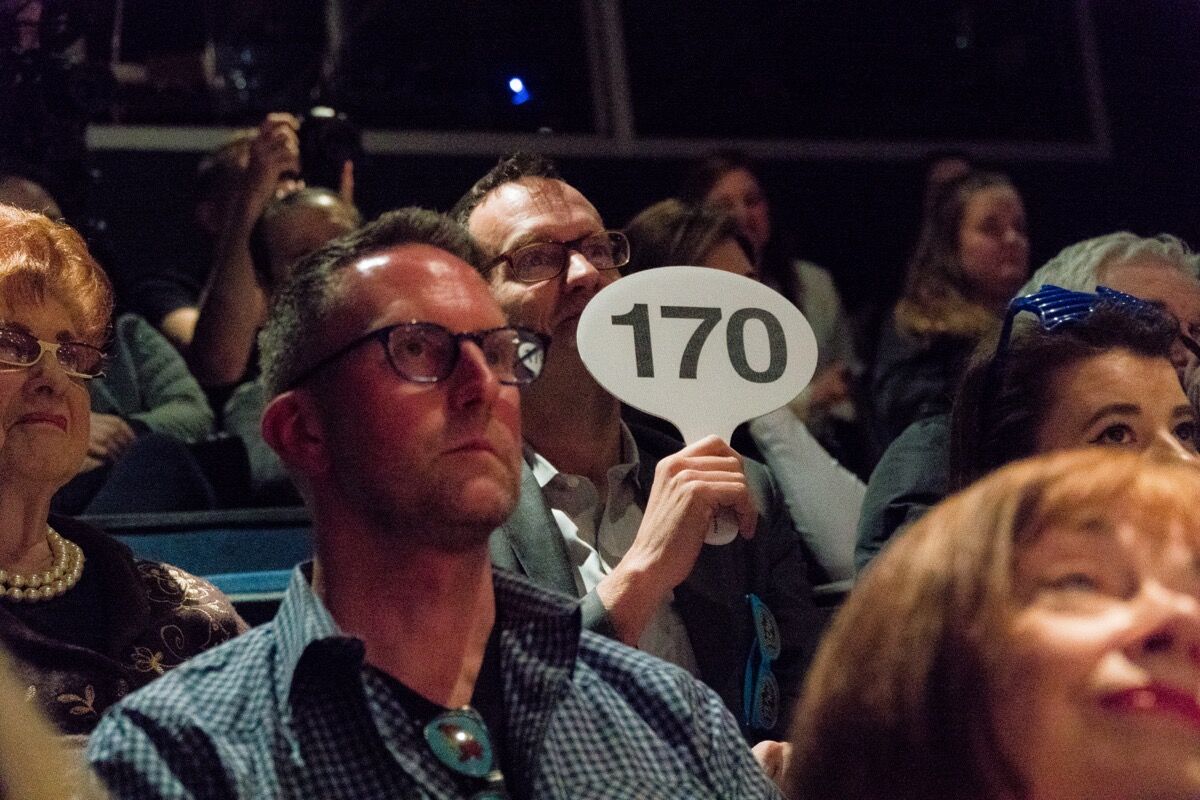 Audience bidding at “Beneath the Gavel” at 59E59 Theaters. Photo by Will Gangi.

Advertisement
This is Bated Breath’s first production to explore the art market. For her part, Strongin thinks that the world of art auctions is uniquely suited to the stage. “Long before the play came out, I taught that auction is theater,” she said. “If we didn’t make it dramatic, if we didn’t make it interesting, people would lose interest and just sit at home on their computers. When there is no bidding, you have to provide the drama as the auctioneer.”
“Even if you have BI-ed the last 45 lots, Lot 46 is like a new day,” she continued, using the abbreviation for “bought in”—an auction term that means a work didn’t sell.
The play takes the time to explain several of these buzzwords—from “bought in” to “chandelier bidding”—in an effort demystify what Strongin describes as a world of “smoke and mirrors.” In one scene, for example, the auction house staff explains how certain high-profile bidders may want to remain anonymous during the sale. Instead of raising their paddles, and thus alerting the entire room to their interest in the lot, these buyers use subtle signals like opening and closing their catalogue to place their bids.
“I’m not sure that 90 percent of the people sitting in the room knew that it happened, or knew why it happened,” said Strongin.
This is not the first time Strongin’s experiences have been dramatized—she served as a consultant to the 2003 Nancy Meyer film Something’s Gotta Give as an inspiration for Amanda Peet’s character. And she said she’s planning to write a book with Bated Breath’s Lieberman, incorporating her decades of archival material from working at auction houses. “It’s almost like parody, some of the memos I have in here.”
She recalled another Cattelan piece that came through Christie’s door not long after the ostrich. This one, La Nona Ora (The Ninth Hour) (1999), was a life-size sculpture of the pope being hit by a meteorite. Ségalot promised there would be no drilling; instead, he requested that the work be installed at Christie’s amidst a sea of red carpet.
The work sold for $886,000 (more than $200,000 over its high estimate), leaving behind what Strongin described as “acres” of red carpet at the auction house. So she rolled it up, sent it to the warehouses, and used it to cushion the newly-installed shelving. To this day, Strongin said, the Christie’s warehouses feature red carpeting on the shelves—an apt reminder of the theater, seamlessly repurposed for the auction world.
Abigail Cain
Related Stories 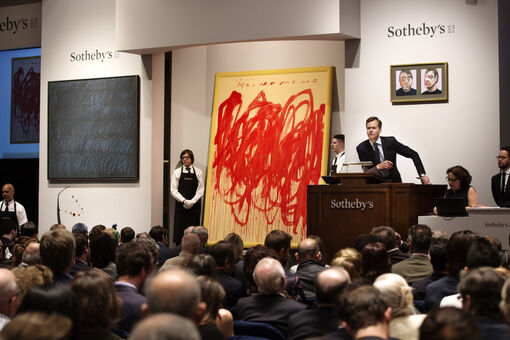