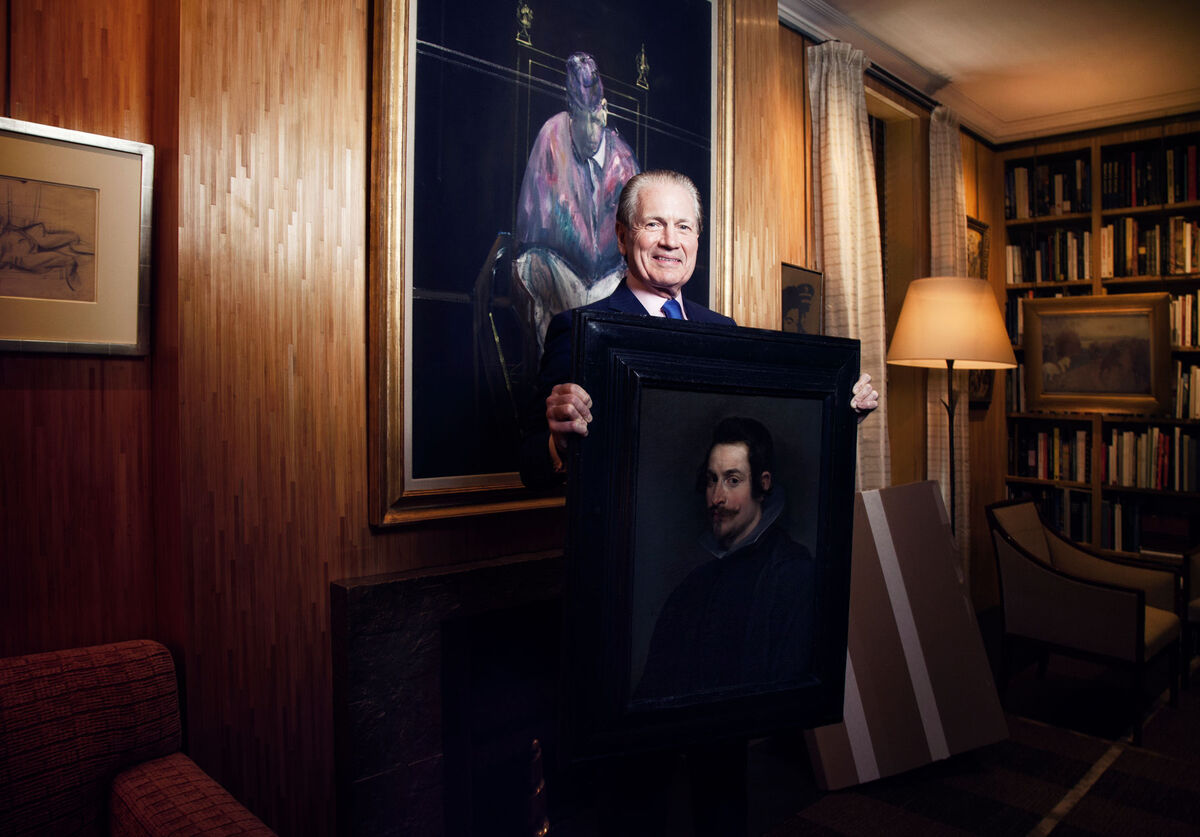 On an abnormally warm morning this week, art collector J. Tomilson Hill was standing in the Hill Art Foundation, the brand new, two-story, 6,400-square-foot private museum in a building right beside the High Line in Manhattan’s Chelsea art district. The billionaire hedge fund manager, who goes by Tom, was sporting one of his typically snazzy tailored suits and slicked-back hair, and was beaming, clearly in thrall with the classy new digs for his trove of masterpieces.
“We wanted it to feel like almost a home—we didn’t want it to feel like a gallery, per se,” Hill said standing at the center of the space, which opens to the public Saturday. “You can sit here and have a conversation. It’s not a gallery. It’s the antithesis of a commercial space.” 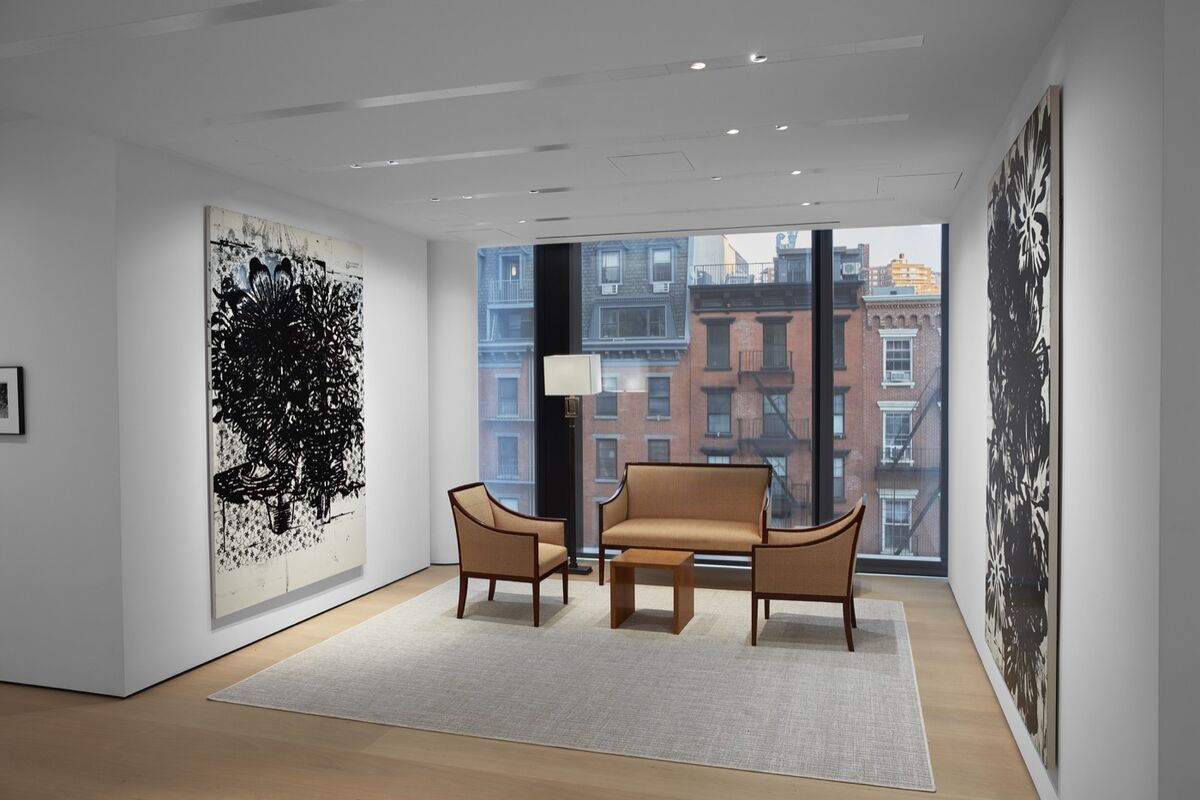 Hill has spent his entire career in what could be called the most commercial space: Wall Street. After earning a mention in the classic business book Barbarians at the Gate: The Fall of RJR Nabisco (1989) for his role in the bidding war for RJR Nabisco in the 1980s, he took over Blackstone’s hedge fund division in 2000, and soon made it the number-one shop of its kind, with $53 billion in assets by 2013. At that point, Hill had more than $500 million in Blackstone stock—Forbes currently puts his net worth at $1.5 billion—and his tenacity as a collector of modern and contemporary art is legendary. Over the course of decades, he has built up holdings of artists such as
Pablo Picasso
,
Cy Twombly
, and
Francis Bacon
, as well as
Old Master
paintings,
Renaissance
bronzes, and rare religious objects.
But now that he’s handed over the reins to Blackstone’s hedge fund, he plans to spend a lot of time at his foundation’s headquarters in the Getty, a new building on the corner of West 24th Street and 10th Avenue designed by
Peter Marino
in his trademark, sleek, black-and-white style. The location is unbeatable. Through the foundation’s floor-to-ceiling windows, I saw tourists on the High Line close enough to get a clear view of its inaugural show, “Maybe Maybe Not,” a grouping of works by
Christopher Wool
—all pulled from the Hill Collection, apart some new photographs lent by the artist—along with a simpatico
Robert Gober
sculpture and a
Giuseppe Piamontini
bronze of Prince Ferdinando di Cosimo III on a bucking horse, which looks sensational among the abstract paintings.
Hill and his wife, Janine, have been collecting work by Wool for decades—they staged the artist’s first show in Asia last March—and are still making major purchases. One of the most jaw-dropping works in the show is an untitled, 10-foot-tall, enamel-on-linen treasure purchased just last March at Sotheby’s in London, with dealer Andrew Fabricant emerging as the winning bidder on Hill’s behalf with an offer of £9.1 million, or £10.4 million ($14.5 million) with fees. 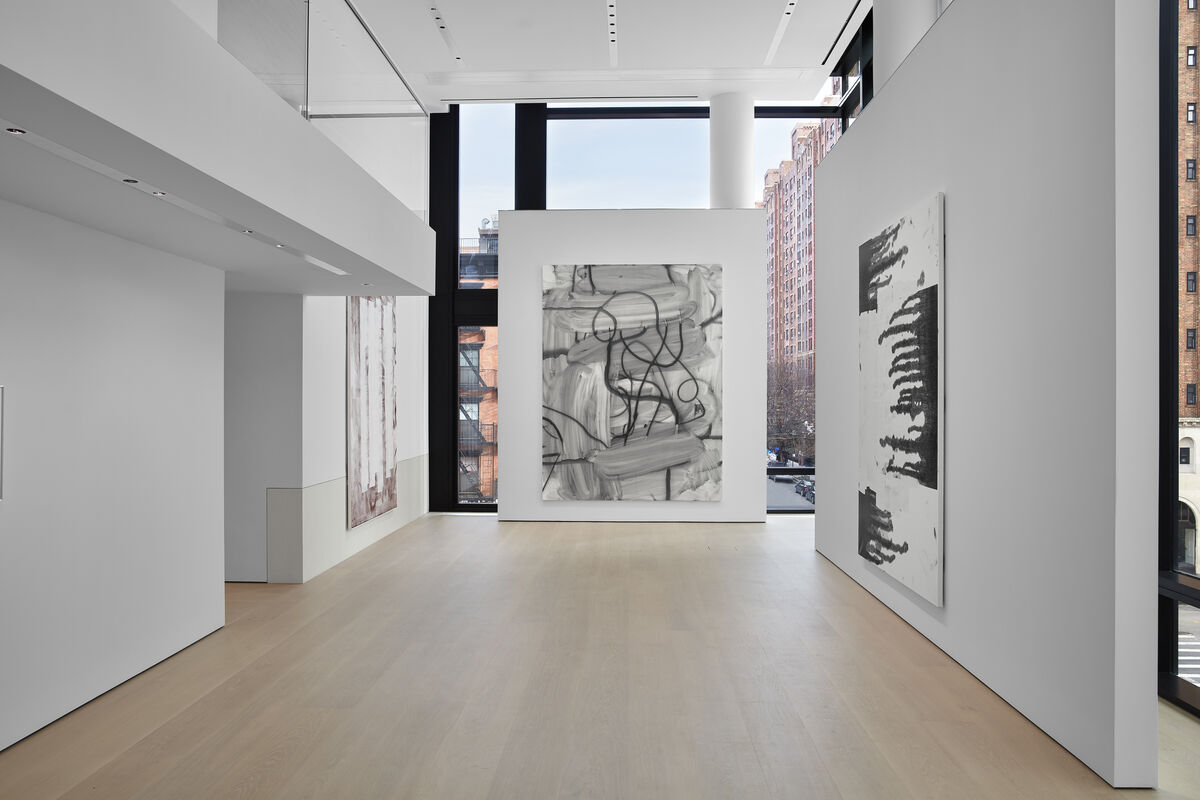 Advertisement
Hill plans to have a new show at the foundation about every six months. And now that he’s stepped away from Blackstone, he’s ready to focus full-time on programming for the Hill Art Foundation, which he runs alongside director Sarah Needham. It will have free admission and be open five days a week, a non-commercial counterpart to the mega-galleries increasingly dominating the Chelsea landscape—nearby blocks will soon be home to new museum-sized complexes for Pace, Hauser & Wirth, and David Zwirner. Hill’s foundation will also have space for educational programming; he is on the board of a Catholic middle school in East Harlem, and plans to have the students come down on field trips.
“It’s fun because we get to do whatever we want,” Hill said. “We’re already thinking about the next show. We have another group of our Wools that at some point we have to show, but we’re going to give Christopher a rest for a while.”
Speaking with Hill, it’s immediately clear just how much thought and passion he puts into into each and every purchase. On the occasion of this weekend’s grand opening, Hill picked five works from “Maybe Maybe Not: Christopher Wool and the Hill Collection” and discussed how he acquired them and why they’re important to him. 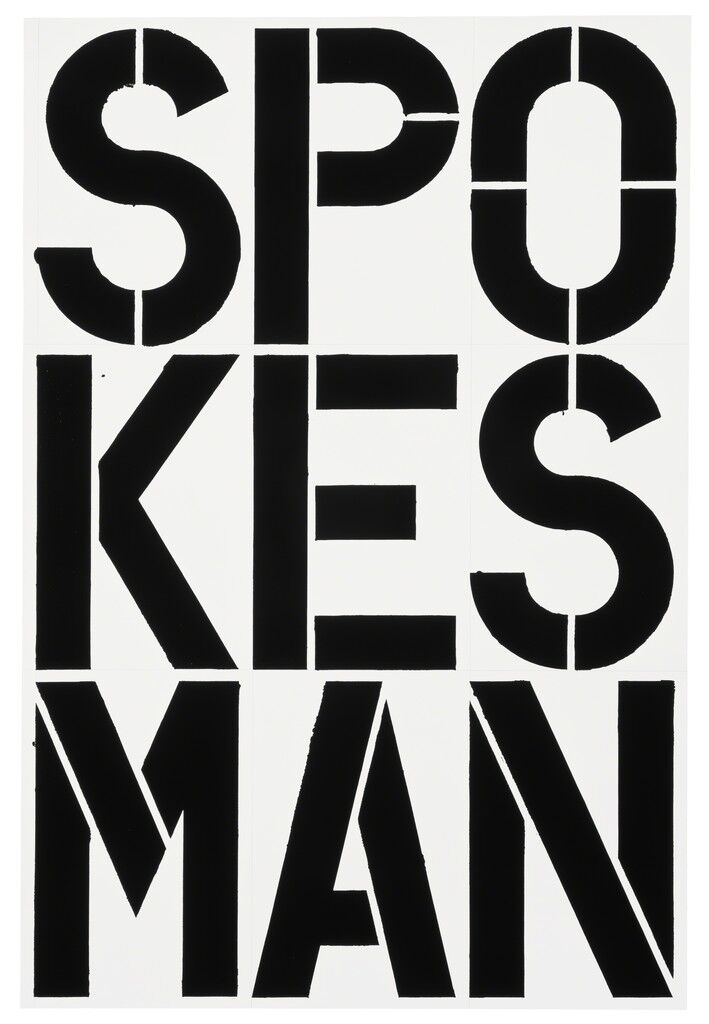 Christopher Wool
Untitled, 1989
Hill Art Foundation
“I’ll never forget the Richard Armstrong line from when we started out early to collect Christopher,” Hill began. “I said, ‘Richard, how did you understand in the late 1980s and early ’90s just how important Christopher Wool is?’ And Richard said, ‘I’ve studied abstraction, and what
Jackson Pollock
started, Christopher Wool is ending—with an exclamation point.’ [Wool] is very much in the tradition of abstract painting. Even a nine-letter painting like that, it’s how the words array, how they line up. It’s an abstraction, you see the paint dripping down. We have another nine-letter painting, called Untitled (1989), [that] we showed in Hong Kong. But this one—I first saw this in the drawing form, and then a friend of mine bought it, and I saw this painting in her house. And with art, if you’re patient, often things come your way, and so it was about two years ago, Lawrence Luhring calls me up and says, ‘Tom, that painting, if you want it….’ and I said, ‘Okay!’” “That’s a long time to wait,” I observed. “It’s a particularly long time to wait,” Hill continued, “because I bought my first nine-letter painting a long time ago, and the difference in the price was, wow! But sometimes you just have to bite the bullet.” “This was in the Guggenheim Museum’s retrospective [in 2013–14], and it was up the ramp, and after the retrospective, I found that it was owned by [Benedikt] Taschen,” Hill said. “Taschen has a history of buying great works and doing major catalogues, and then sometimes deciding to part with them. So when this came up for auction at Sotheby’s, I got it, and a friend of mine was the underbidder—he lost out, but he ended up buying the next one that came up, also at Sotheby’s. He has about six Christopher Wools. What you find is, there’s almost a community among the museum people, including the curators like Katherine Brinson and Richard Armstrong, including Neil Benezra. I remember I was on the board of the Hirshhorn Museum and Sculpture Garden when the Hirshhorn bought its first Wool, and it was Neil Benezra, who was the deputy director and now runs SFMOMA, who said, ‘We are buying this picture.’ That was 1995, ’96. Benezra pounded the table.…Anyway, this painting, sometimes you get fixated about a work, but if you’re patient, sometimes good things happen.” 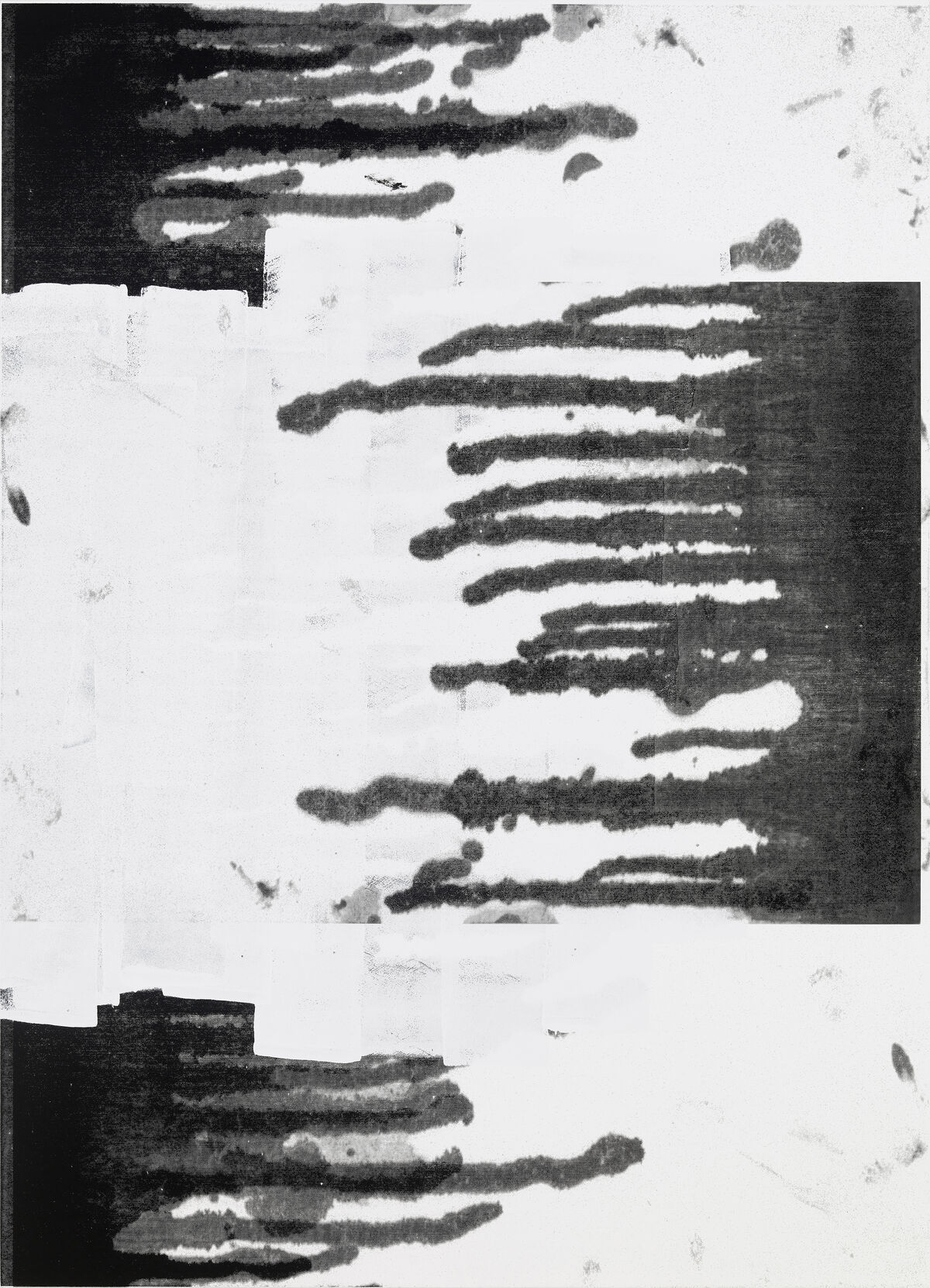 “This was in the Bushwick show at Luhring Augustine,” Hill recalled. “Christopher wanted to keep this painting. I talked to Roland [Augustine] and Lawrence [Luhring], and they said, ‘He tends to keep one painting from each show, and it’s this one’—but that’s the one painting I wanted! But he did sell it. And I said, ‘Christopher, what inspired you around this painting?’ And he said he gets a lot of inspiration from music, and not just film, but also experimental films. And he said, ‘There’s this scene in [the 1990 film] Goodfellas,’ and I said, ‘What?’ He said, ‘Yeah, there’s a scene in Goodfellas where the guy that they thought was dead was in the trunk of the car, and they go to his mother’s house and she’s cooking an Italian meal and in the middle of the meal they hear thumping—because the guy’s not dead, they didn’t finish him off. And during the meal there’s a black cat, and he’s walking back and forth.’ And Christopher said, ‘In this, I’m thinking about convergence, and not necessarily a cat, but about things coming from different angles, and surprises. And in the movie, they go and put a bullet in the guy’s head and then they go on!’ And this is a completely new direction for Christopher, and what you’re gonna see at Corbett vs. Dempsey in Chicago (where a Wool exhibition opens on Friday) carries on with a lot of Rorschach blots. And this was, as you know, prominent in Hong Kong, it was the first thing that you saw. Christopher wanted it there.” 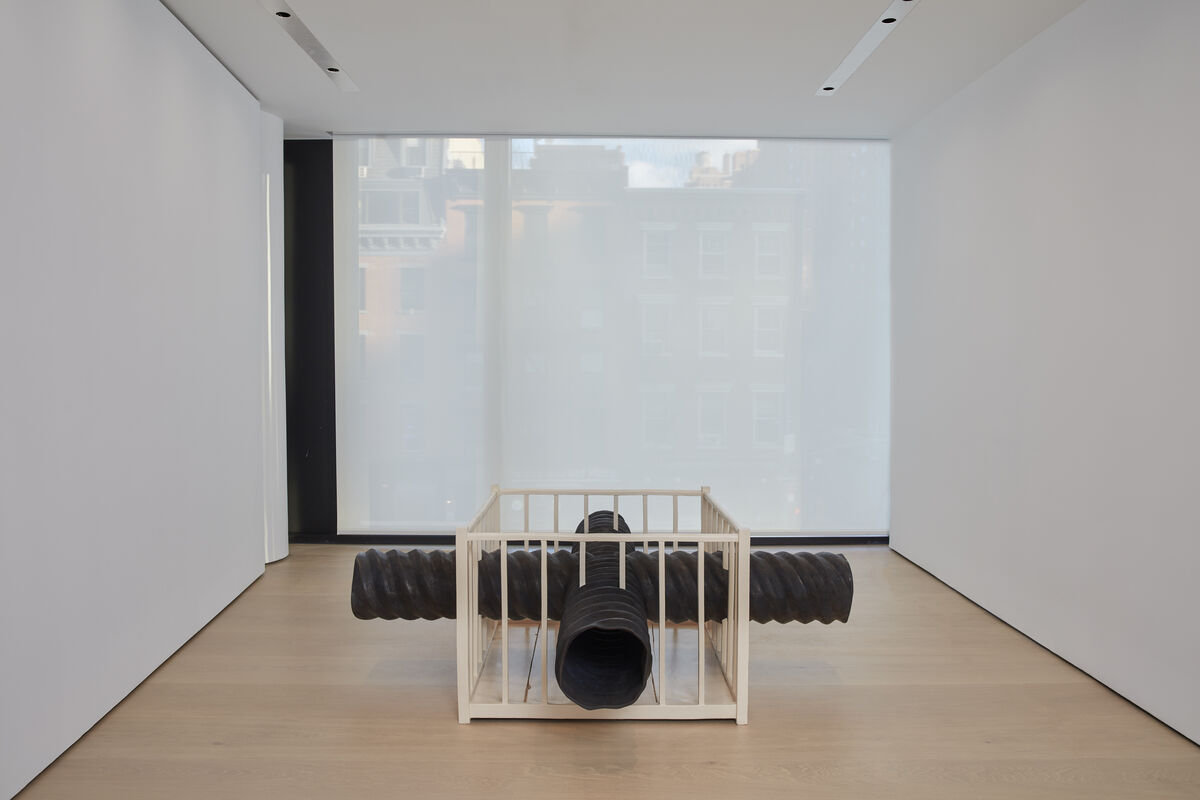 “I asked Christopher, because we have a lot of Robert Gober’s work, and so I said, ‘How would you feel about having Gober?’ He said, ‘Oh, you know, I’ve collaborated with him extensively,’ and so he said, ‘Yeah!’ But he got to choose which work, and so it’s the first thing you saw on the left—and it was the first thing you saw at the Museum of Modern Art’s Gober retrospective. I saw it at the Museum of Modern Art, and it was owned by Bob, it was in his own personal collection. We collect in the bronze area a lot of crucifixions, we have a lot of Old Master paintings with crucifixions. My wife is a devoted Catholic, I converted. And we have a grandson, so there’s the concept of a playpen. And then the pipes running through it, you have a prison. And at the edges of the pipes you have flesh because it’s curved, like skin. To me, it’s just very moving.”

“These usually are in East Hampton, right in our bedroom,” Hill explained. “Christopher said, ‘I want those,’ so I said, ‘Okay, you got ‘em!’ But I can’t wait to get them back to East Hampton.”
Nate Freeman
Correction: A previous version of this article incorrectly referenced two Christopher Wool works from 1989 as Untitled (SPOKESMAN) and Untitled (PRANKSTER). These works are both called Untitled. The text has been updated to reflect this change.
Related Stories