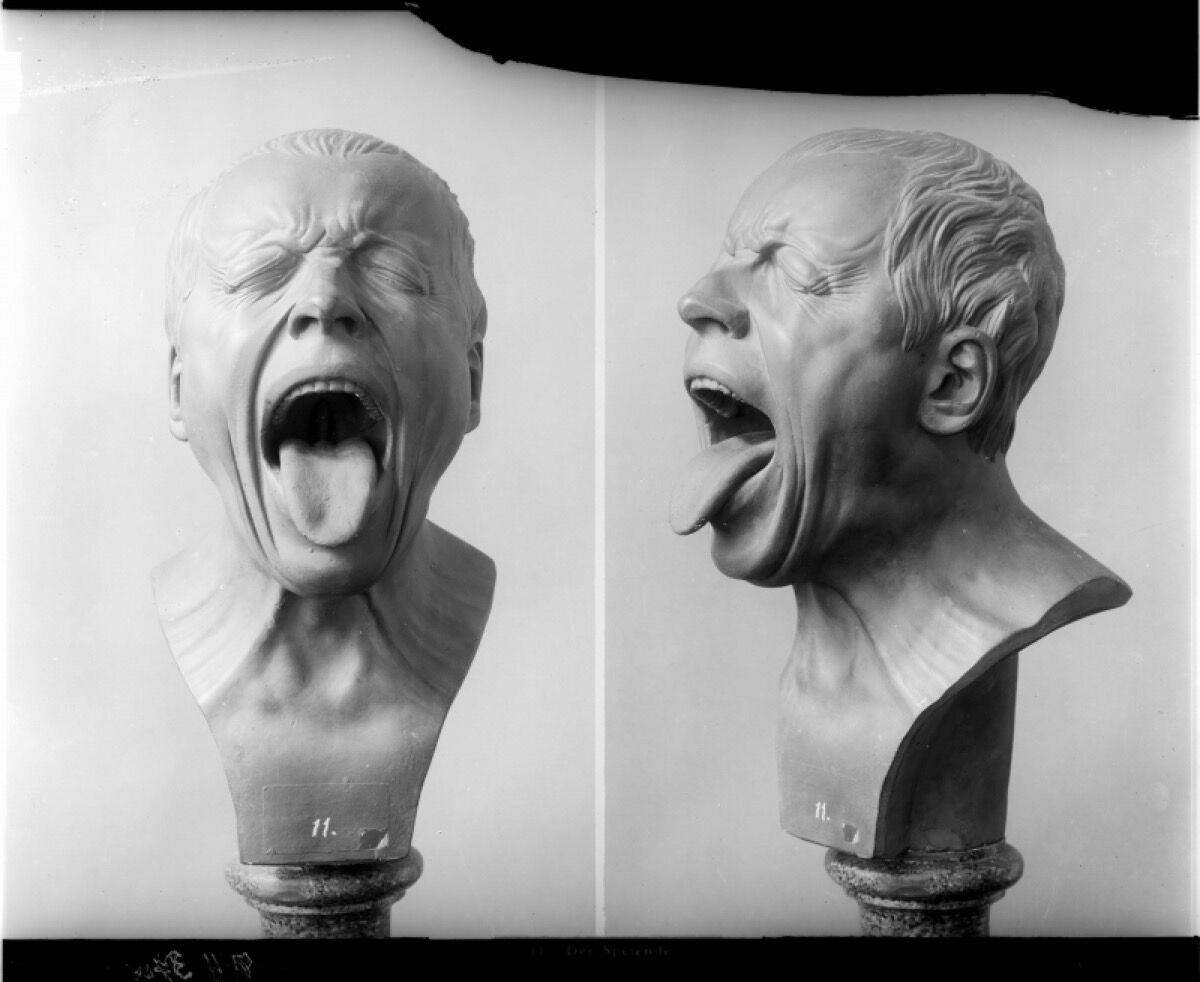 The Incapable Bassoonist, Afflicted with Constipation, A Know-It-All Quibbling Quipster—these are titles attached to a handful of sculptures by
Franz Xaver Messerschmidt
, though they could just as easily be characters in a Saturday Night Live sketch. There is an obvious element of comedy to these curious 18th-century busts, which stretch the range of human expressions to impossible extremes. Face after face in the German-Austrian artist’s “Character Heads” series (1770–83) appears pinched, wrinkled, or twisted in exaggerated states of cheerfulness, disgust, or shock.
Today, 54 of the original 69 works still exist—16 of which are in the collection of the Belvedere Museum in Messerschmidt’s one-time home of Vienna, displayed together against a luxurious red velvet wall. “They push even the most jaded museumgoers out of their reverential lull and into confused stares and laughter, often resulting in puzzled smirks not too different from what the sculptures themselves convey,” writes art historian Michael Yonan in a recent book about the series. 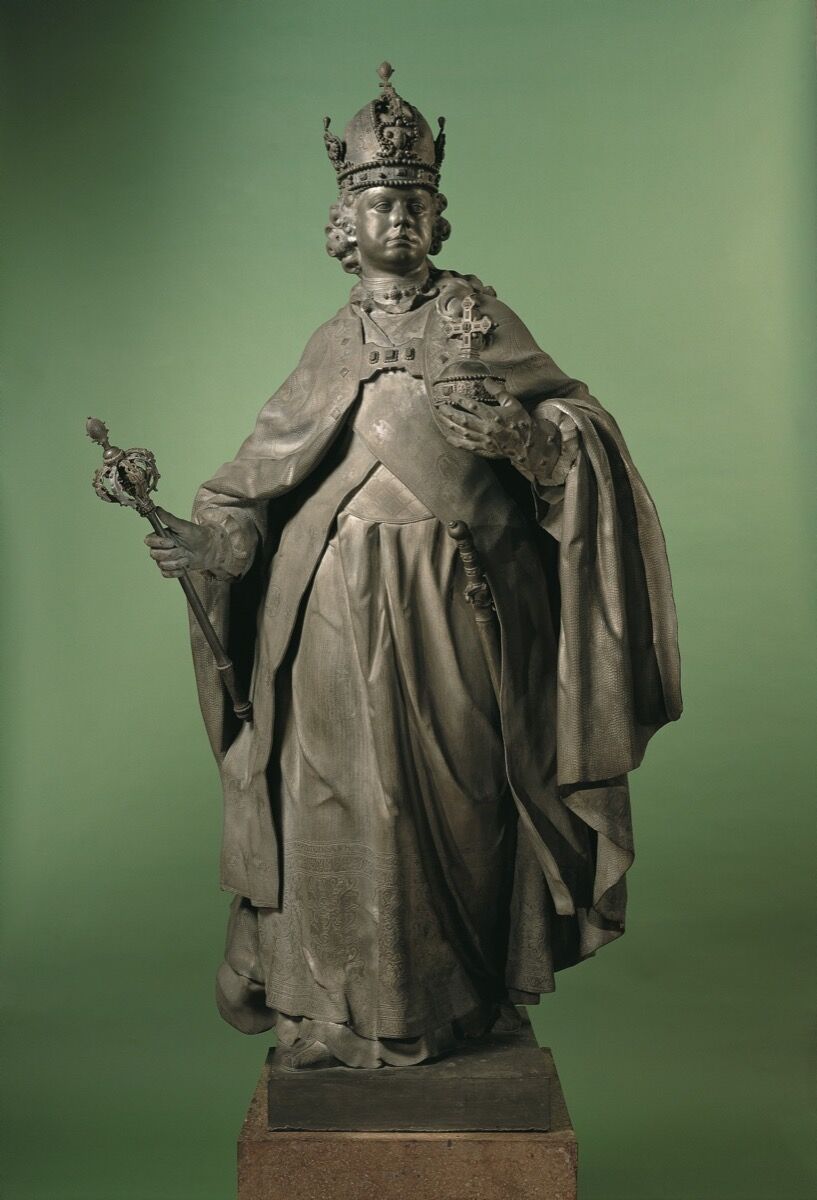 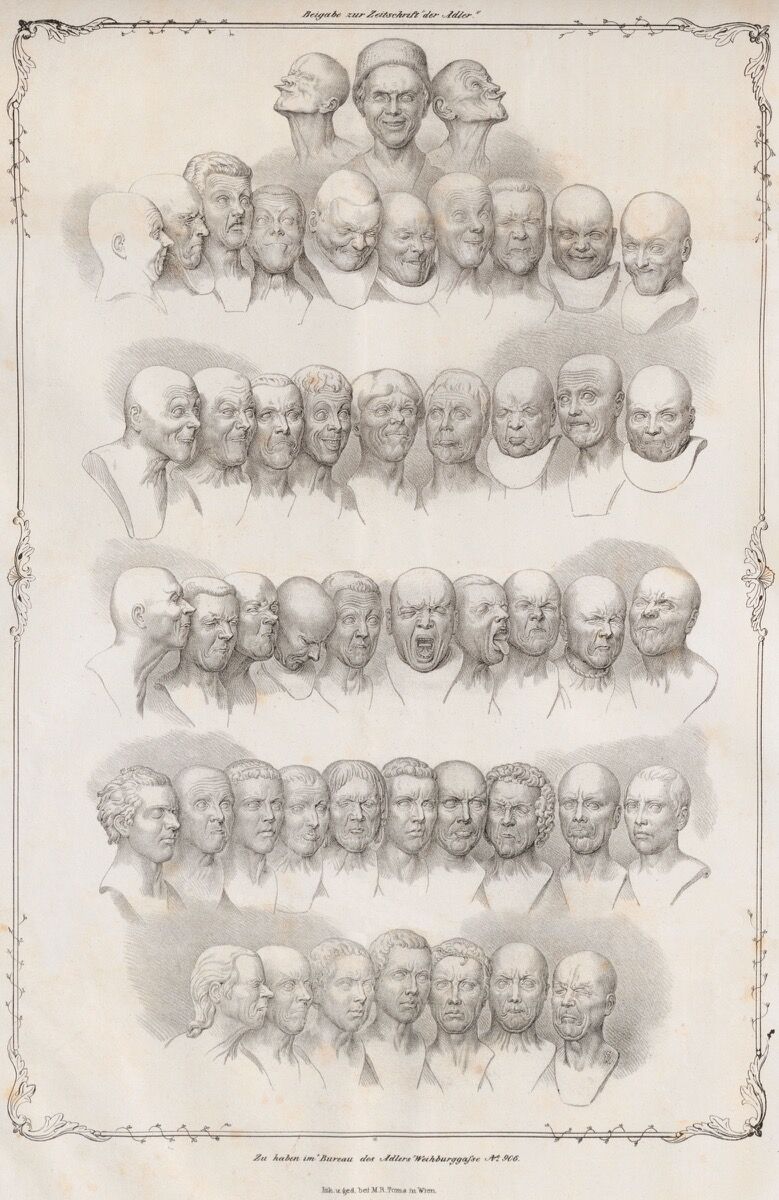 Despite the bizarre nature of his “Character Heads”—and the unsettling circumstances that inspired them—Messerschmidt’s career began traditionally enough. Born in 1736 in the Bavarian countryside, his family moved to Munich when he was a young boy. There, he was trained by his uncle Johann Baptist Straub, one of the foremost German
Baroque
sculptors of the day. Messerschmidt moved to Vienna in 1754 to pursue an education at the Academy of Fine Arts, where he caught the eye of the academy’s director and imperial court painter, Martin van Meytens. Backed by the influential older artist, Messerschmidt managed to secure a series of commissions from the Prince of Liechtenstein—one of which, a bronze bust of Habsburg empress Maria Theresa, so impressed the royal subject that she requested her own full-length portrait from the young sculptor.
Messerschmidt’s busts from this time are ornate and flashy, rife with flowing drapery and fluttering ribbons. Following a trip to Rome in 1765, his work became more classical and pared down—closer to the style he would eventually employ for his “Character Heads,” minus the exaggerated facial expressions. At the same time, the new Royal and Imperial United Academy of the Fine Arts in Vienna was considering him for a full-time professorship, a position that could cement his livelihood and professional success.
And then, around 1770, things began to go sideways for the rising star. Messerschmidt’s longtime champion, van Meytens, died. The sculptor experienced a sort of mental collapse, as he wrote to his brother in a letter in June of that year. Always a bit hot-tempered, he became more combative, even threatening to kill a fellow artist during a late-night work session. Yet Yonan takes a more sympathetic view of what many scholars assume to have been some kind of mental breakdown. Vienna at the time “was a world of appearances,” he told Artsy. “You had to be a certain kind of person, you had to play by the rules, you had to be kind of straight-laced. There were certain rather restrictive expectations on artists. I think he tried to play along with it for a little while and couldn’t do it.” 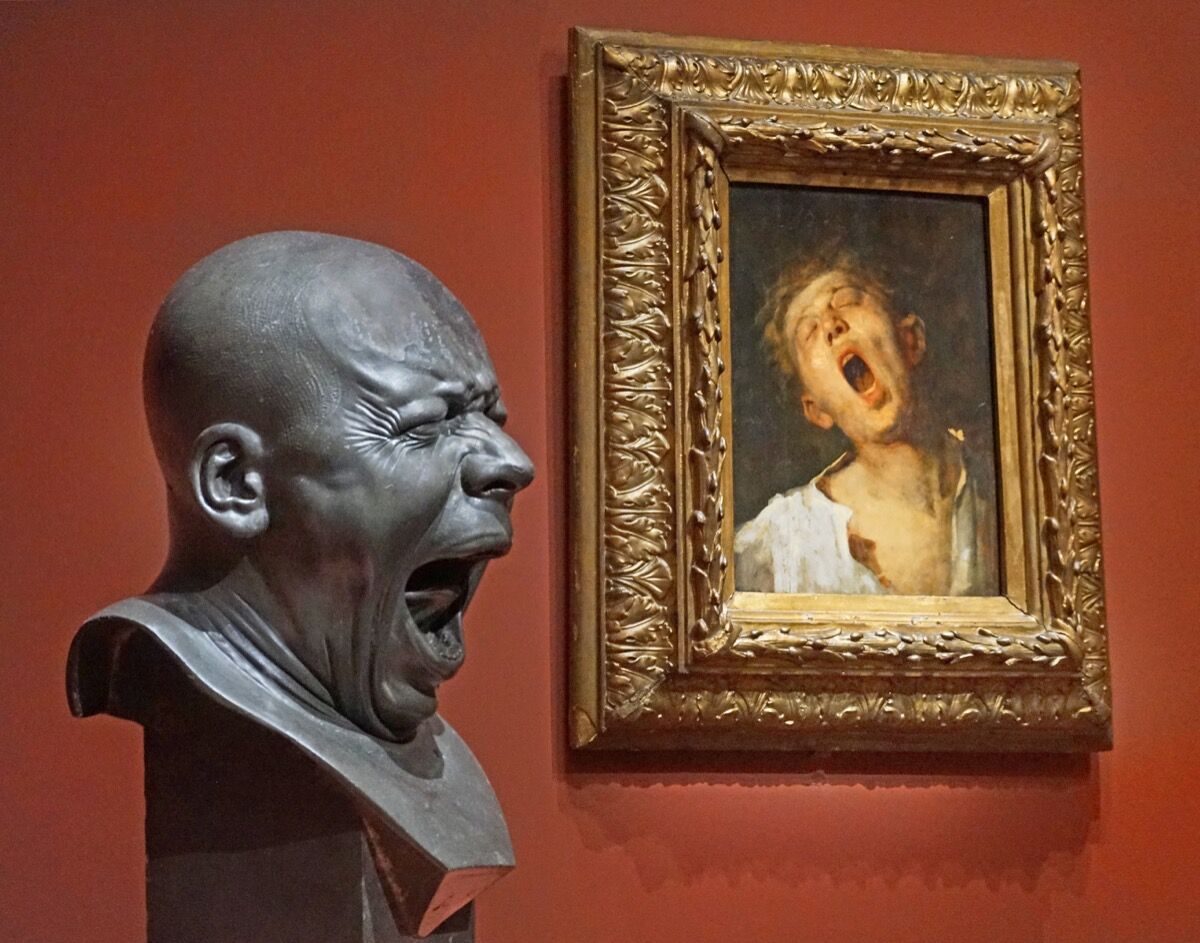 Advertisement
If he lived today, Yonan suggested, Messerschmidt would be “a sort of working-class guy, a little brusque. I think he was someone who didn’t blend into society seamlessly.” In 1774, Messerschmidt was passed over for the professorship by the academy. Humiliated, he packed his bags, and, after a failed attempt to secure commissions at the Bavarian court in Munich, finally ended up in Pressburg (in present-day Bratislava), where his brother lived. 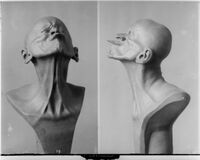 Franz Xaver Messerschmidt
View Slideshow
5 Images
During this time of self-imposed seclusion, Messerschmidt supported himself with occasional commissions and even tinkered with creating prosthetic limbs. But it was the “Character Heads” that consumed most of his energy. Historical evidence suggests that they were a personal project rather than works intended for eventual display; according to the artist, a Hungarian count once attempted to buy the grouping for a hefty sum of 8,000 gulden, but the sculptor declined to part with the works for less than 10,000.
Although some of them are modeled after himself, and others presumably after his brother, it’s not quite right to call these works portraits, Yonan said, because the expressions are often physically impossible. The Vexed Man (ca. 1770), for instance, screws up his face in the manner of a man who’s just passed by a particularly ripe sewer. The tendons in his neck are pulled so tight they seem as though they might snap, while his mouth is etched into a deep, disgusted frown. The figure in An Intentional Wag (ca. 1770), on the other hand, is trying his hardest not to burst into what appears to be laughter. Instead of pinched together, his features stretch out into an elongated mask, almost like the poles of two magnets repelling each other. 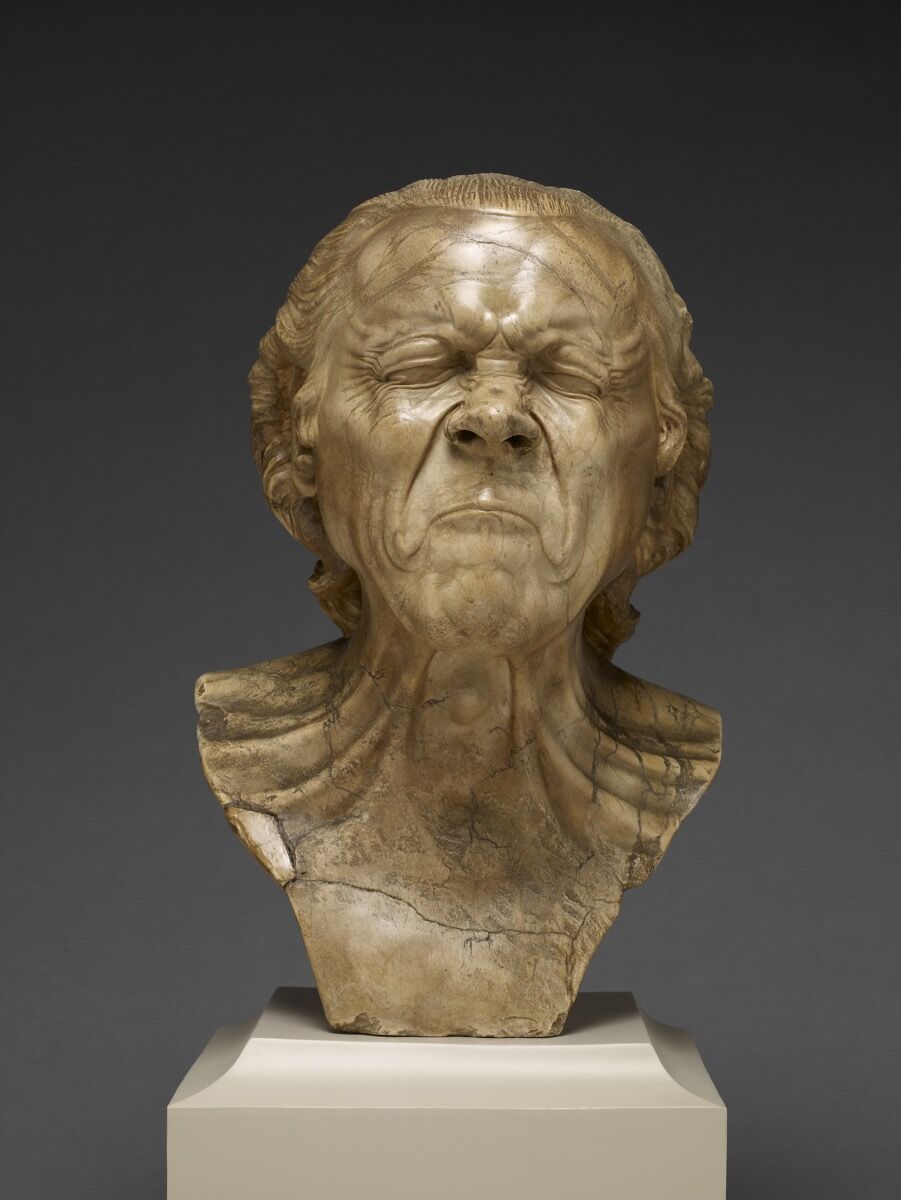 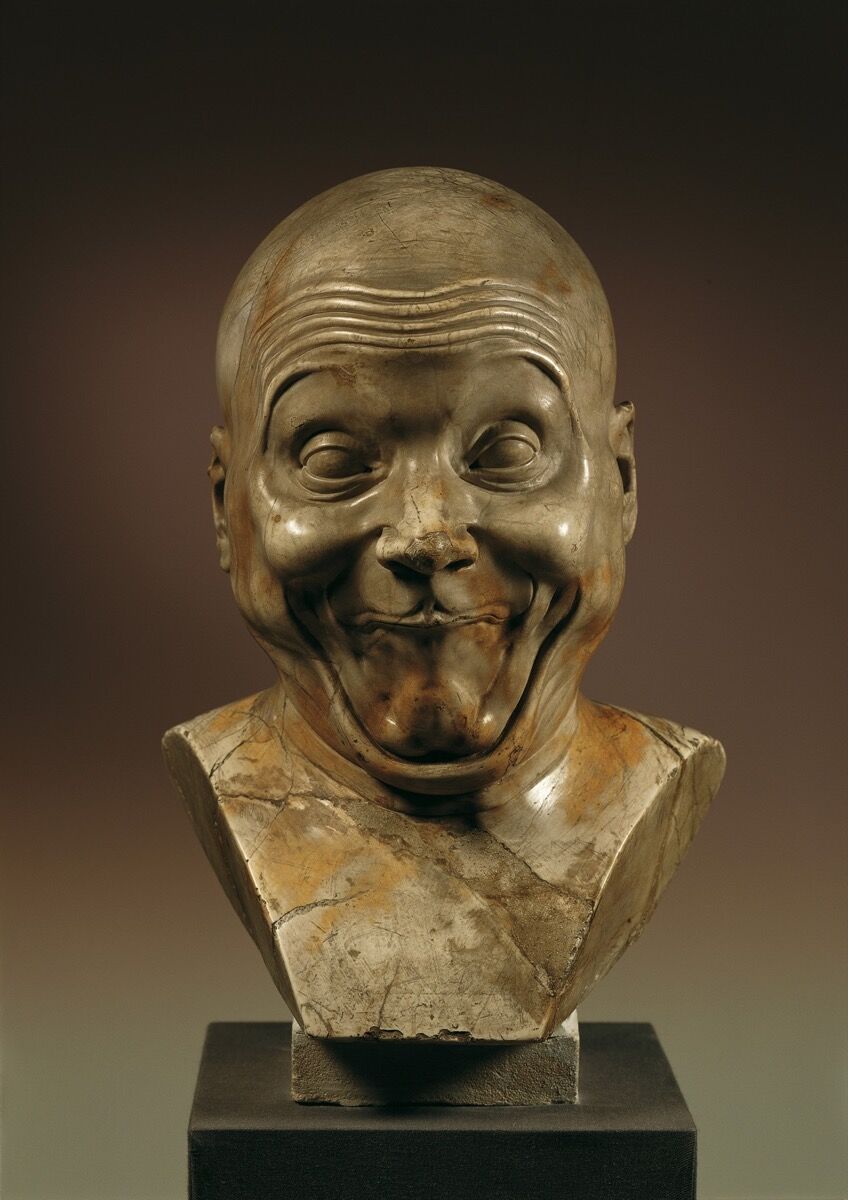 Messerschmidt maintained his reputation even away from major art centers, and fans of his work made a point to visit him at his home in Pressburg. His most consequential visitor was Friedrich Nicolai, a bookseller who later transformed their conversations into a compelling essay that appeared to explain these confounding works. The text claims, among other things, that the sculptor was trying to craft an example of every possible type of “grimace,” of which he thought there were 64 varieties. Nicholai also wrote that Messerschmidt believed he was haunted by ghosts, including a “demon of proportion.” By creating a range of proportional faces, he thought that he could use them as talismans to ward off the evil spirits.
Nicolai’s account, published in 1785, two years after Messerschmidt’s death, has become the cornerstone for much of the art historical literature surrounding the artist. Later researchers built on these recollections, and have posthumously diagnosed Messerschmidt with various mental illnesses. As recently as 2011, one researcher suggested dystonia—a condition that involves involuntary muscle contractions that can affect the face, which may have been a symptom of schizophrenia.
For his part, Yonan thinks this game misses the point. In his book, he lays out his belief that the Nicolai essay is largely fabricated. Rather than a mentally unstable man’s talismans, he suggests that Messerschmidt’s “Character Heads” are the work of a “geek”—someone who obsessed over the workings of the body’s flesh and bone. Rather than idiosyncratic amulets, these sculptures may have been meant as a physical challenge to their maker. “He’s taking the most meaning-laden part of the body and mixing things up in how the parts of the face work to confuse or otherwise challenge our ability to figure out what they’re doing,” Yonan explained. “That kind of inability to pin down exactly what the faces are doing is, I think, what he was going for.” It’s a contrarian approach to artmaking that wouldn’t be out of character for Messerschmidt, a sculptor who never fit the mold of a genteel court artist. 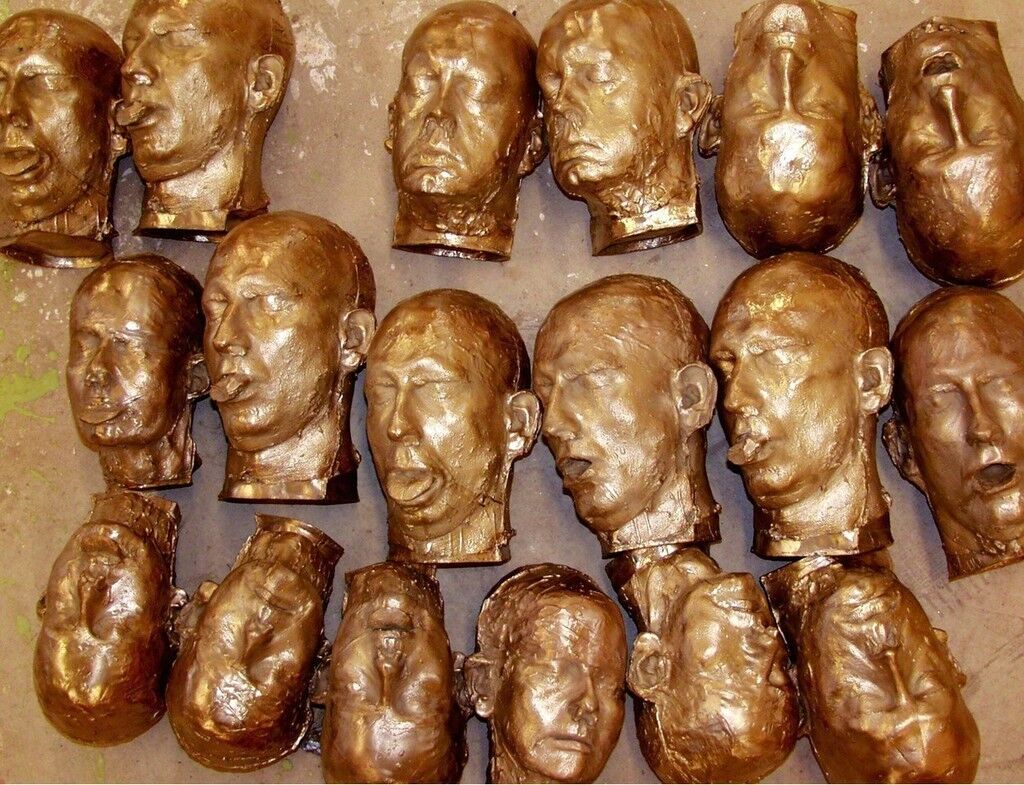 Bruce Nauman
Studi Floor Detail, 2006
Carolina Nitsch Contemporary Art
After Messerschmidt died, his works were passed down to his family, who sold them to a restaurateur, who displayed them at the Citizen’s Hospital in Vienna as curiosities, and later at a city theme park. (The restaurateur also assigned them their flashy titles, hoping to render the sculptures more understandable to viewers.) Over the following generations, Messerschmidt regained his institutional footing. His works ended up in the collections of the J. Paul Getty Museum and the Metropolitan Museum of Art, and have found a growing market at auction.
In some ways, it feels as though these busts have, at long last, found their proper place in time. The Getty, in a 2010 exhibition, placed his work alongside that of
Cindy Sherman
and
Bruce Nauman
, artists who have also distorted the face in intriguing and sometimes disturbing ways. Messerschmidt is often discussed as if he were a 19th- or 20th-century artist, Yonan said (he’s even included in a survey book of 19th-century art, despite dying two decades before the century in question began). Juxtaposed against the traditional form of the bust and time-honored materials like bronze and marble, the irreverent expressions of his “Character Heads” do reflect a certain contemporary sensibility. Although some of his biography may have been fabricated, perhaps Nicolai had it right in the end, when he dubbed Messerschmidt “that strange man and really great artist.”
Abigail Cain
Related Stories