The vibrant exhibition itself fizzles with a number of Melgaard’s stunning, large-scale canvases, which are hung surprisingly low—shin-high, even—as though to welcome in observers. Made during an energetic four-day “explosion,” they are wholeheartedly expressionistic, Basquiat-like works that make the eyes dance and dart, but there is this unmistakably chaotic, dystopic undertone that the painter speaks of too. Conveying Melgaard’s typical text-based motif, one painting proclaims “DON’T BE CRUEL” over a Pollockian splatter, while another depicts a dark-eyed creature emblazoned with the phrase “WHY DOES IT ALWAYS FEEL BAD.”

That peculiar hippopotamus figure—which re-appears several times throughout the show—turns out to be a variation on Finnish illustrator Tove Jansson’s Moomin, the famed Scandinavian cartoon. “I’ve been doing a lot of research recently into the basic expression of LSD and DMT, so it was like me imagining the Moomin on LSD,” explains Melgaard, who similarly created a 12-foot-tall, meth-smoking Pink Panther sculpture made from fiberglass for an exhibition at New York’s Gavin Brown in 2013. “For this, I wanted to evoke not the hardcore nature of crystal meth, but something much more peaceful and open-minded, in the way that LSD can influence.”
His work certainly forms a more experimental strand among the annals of art history, and Melgaard’s predilection for fruity exhibition titles may pique some (previous examples include “The Synthetic Slut: A Novel By Bjarne Melgaard” and “Kill Me Before I Do It Myself”). But some of the critical reaction to the New York-based artist has been unprecedented. In reference to a recent joint show in Oslo juxtaposing Melgaard and Edvard Munch, art historian Hilde M.J. Rognerud wrote a think piece in Norway’s most widely circulated newspaper, Aftenposten, demanding its closure, declaring: “Bjarne Melgaard’s sexualized art is violating both the audience and Munch’s artistic project.” Others, meanwhile, have labelled it as promoting pedophilia and sadomasochism.

Advertisement
The irony, apparently, is lost on them. “Munch in his lifetime was a very controversial figure and his work was very badly received when he was alive,” points out Melgaard, correctly. “People were very disgusted by his work. So, it was weird that people thought that my show disgraced Munch.” Melgaard indeed has two obvious affinities with now-revered artist: both of them channel an underlying nihilism and use graphic depictions of sex. Why, then, does Melgaard think there has been a backlash? “It’s very homophobic. I don’t think a show with those sexually charged images or motives or contents would be received the same way if it was a straight artist. Homosexuality is repressed all over the world.”
If that is the case, then Melgaard has done more than his fair share of undoing such repression. His oeuvre to date has been like a volcanic eruption of exposition—not just about homoeroticism, but sexuality, race and power. His first New York show, in 2000, included bronze sculptures of apes aggressively having sex, another included two live tigers, while he installed a psychedelic dungeon of hedonism at last year’s Whitney Biennial. That’s even before mentioning the orgiastic, drug den dollhouses he created for Luxembourg & Dayan, or a fabled project called AIDS Roulette, for which he supposedly gathered together six gay men—one HIV positive—and then randomly selected one to have unprotected intercourse with. 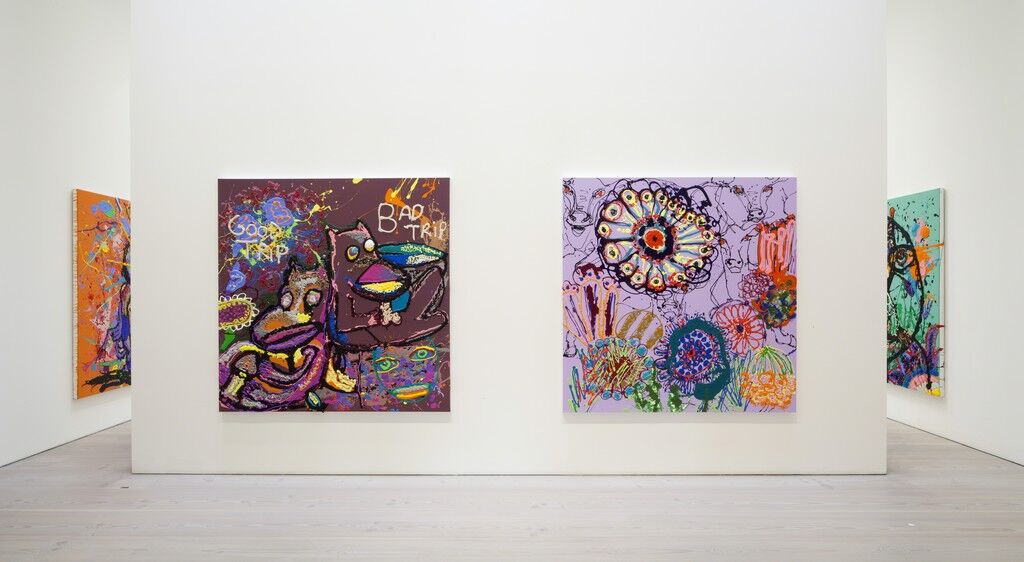 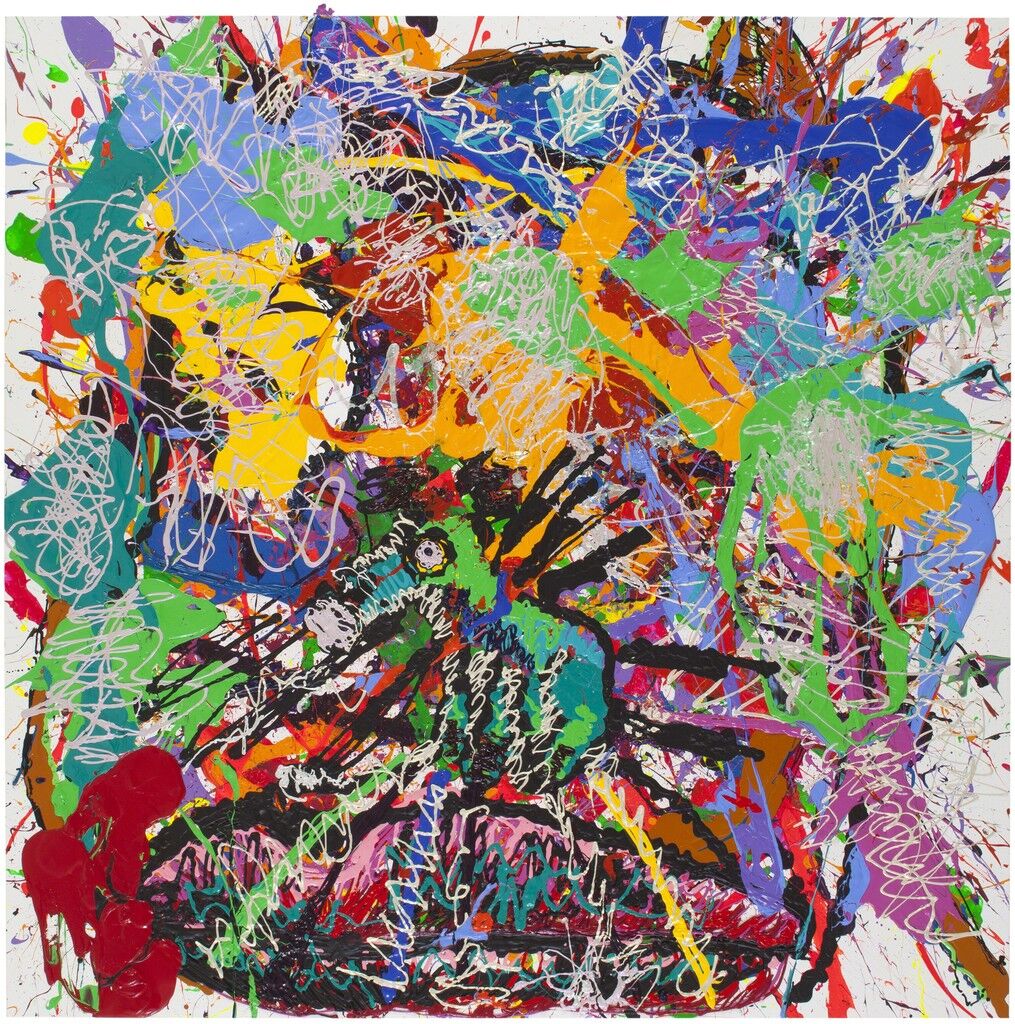 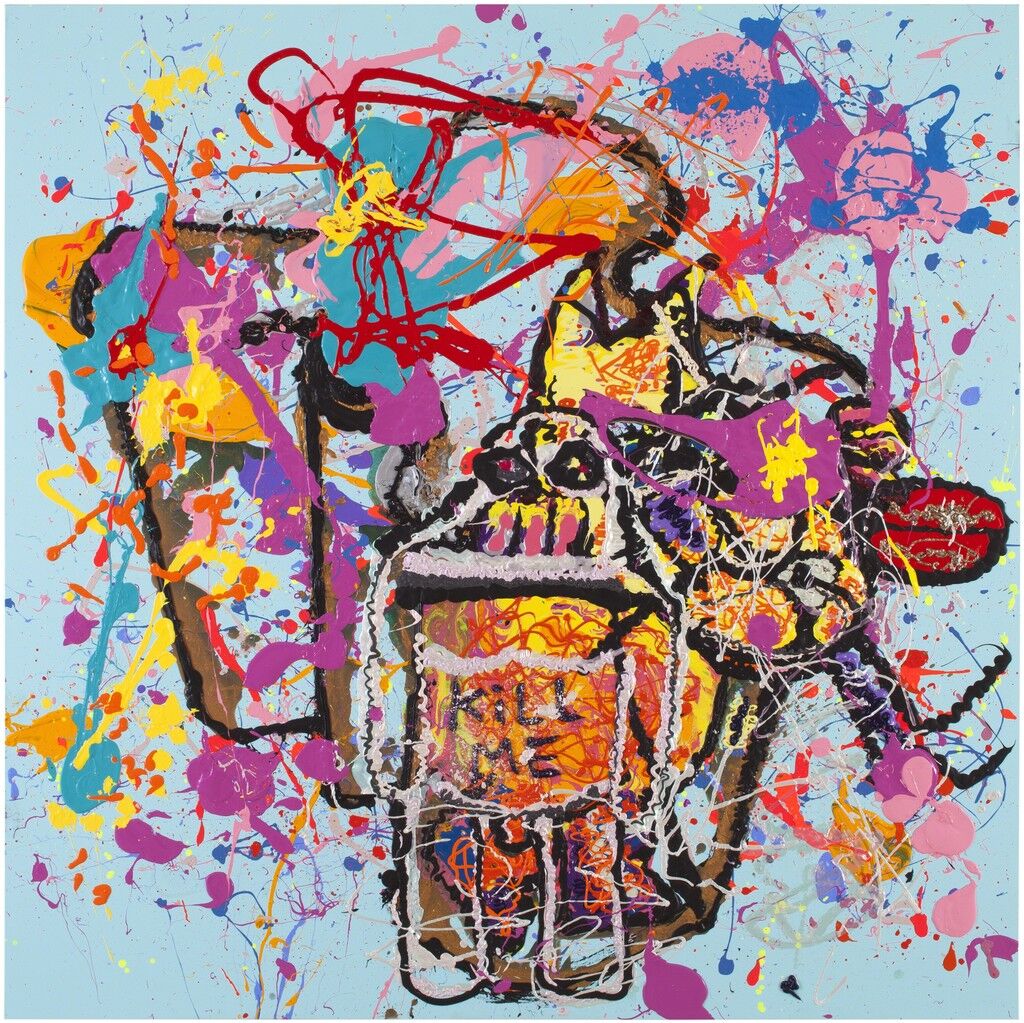 Bjarne Melgaard
Untitled, 2015
Galerie Forsblom
Melgaard’s upbringing in an Oslo, which he has described as “very puritanical and homophobic,” has clearly shaped this output. Though he counts his time as a discontented student at the Rijksakademie in Amsterdam and the Academy of Fine Arts in Oslo as equally influential. “I couldn’t really deal with the idea of being a professional artist or see myself in this professional background that the Rijksakademie want their students to be like,” he reveals. “I didn’t have an ambition to be like that. I didn’t really think I was going to have a career in art.” But after a hiatus in Australia, living as a “beach bum,” he realized that being a painter was the way forward for him. “You don’t have to collaborate with 50 people to discuss god knows what with them. You just have a canvas and paint, and it’s that freedom that I like.”
Now, it seems, Melgaard is comfortable in his skin with a candid, eye-opening outlook. The art world confirms this. He was given the prestigious honour of representing Norway at the Venice Biennale in 2011, his works are in the esteemed permanent collections of the Museum of Contemporary Art in Los Angeles and London’s Saatchi Gallery, and is often cited as the “most famous Norwegian artist since Edvard Munch.” Even hip-hop superstar Frank Ocean recently paid homage. With a comprehensive retrospective in Norway confirmed in the near future, this sincere, post-internet Twombly—despite those that he will inevitably upset—is here to stay.
Peter Yeung
“Puppy Orgy Acid Party,” is on view at Galerie Forsblom, Helsinki, Apr. 10–May 3, 2015.
Follow Galerie Forsblom on Artsy.
Related Stories