How “BoJack Horseman” Illustrator Lisa Hanawalt Is Shaking up Animation 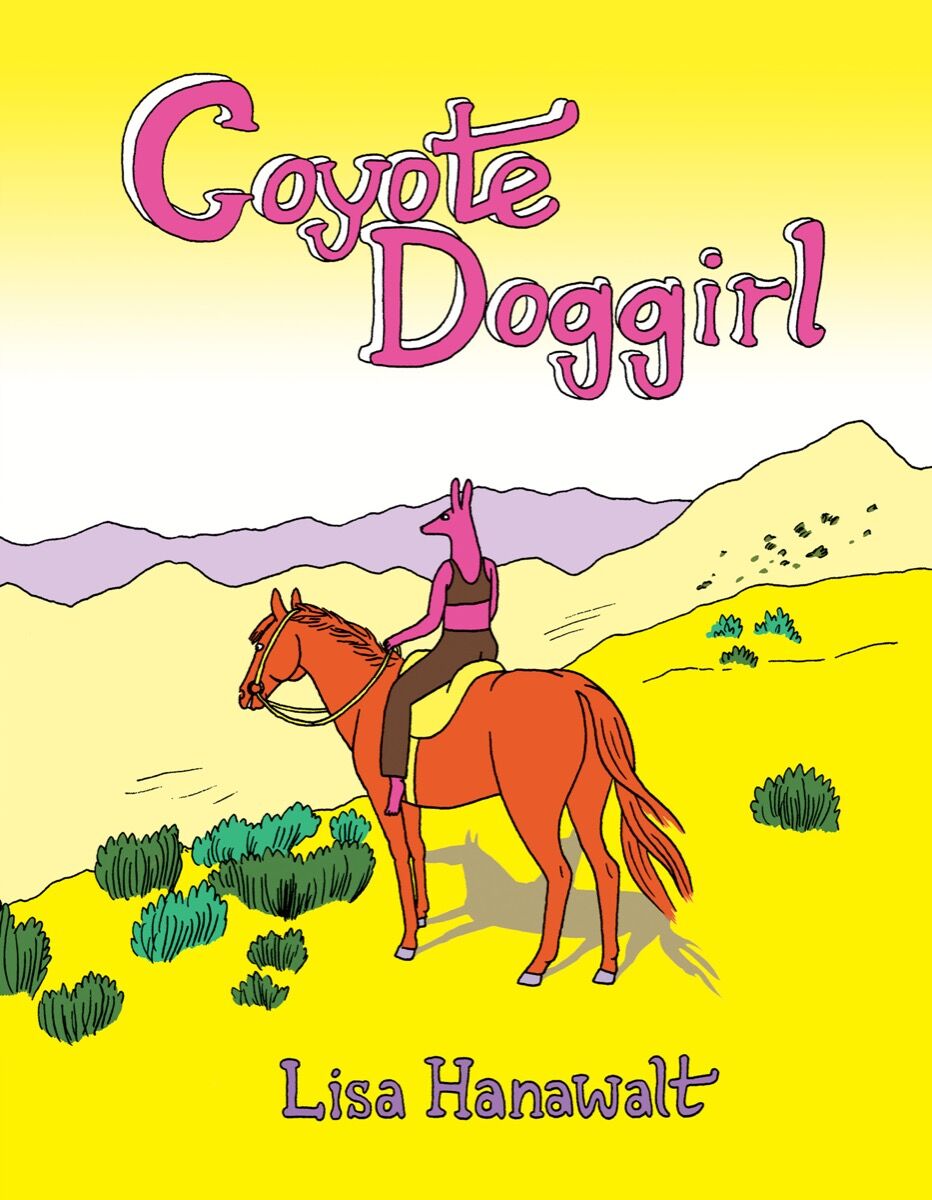 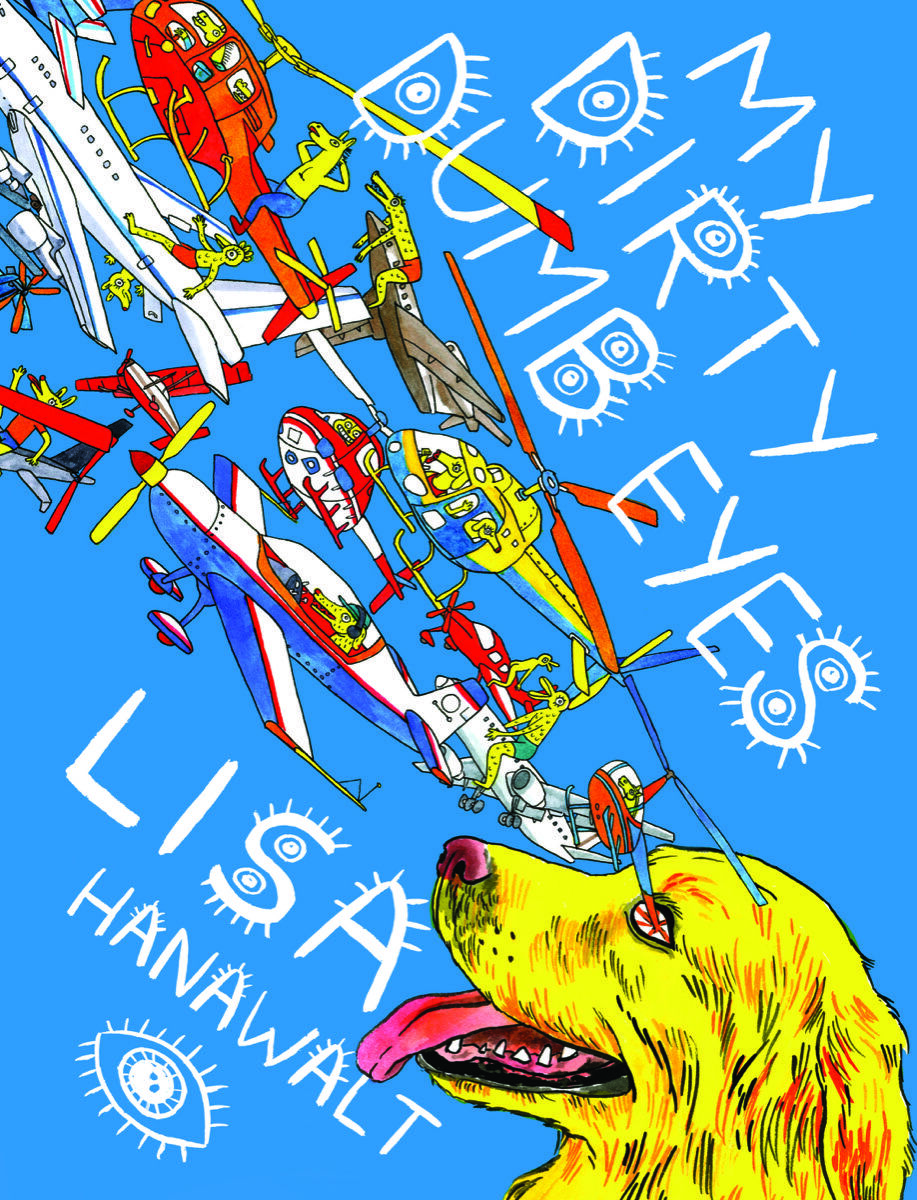 Among the sagebrush and desert poppies, against a purpling sky, a solitary rider sits high on a red horse, pursued by an ominous group of silhouetted men. Our hero has the scrappy toughness of a coyote and the ears of a dog, and lately, she’s been getting a lot of unwanted attention from strange guys.
The rider, Coyote Doggirl, is the eponymous star of Lisa Hanawalt’s third book; she is one of the many animal characters who populate Hanawalt’s surreal and furry universe. Best known as the illustrator and art director of the animated series BoJack Horseman, Hanawalt is a longtime fan of classic Westerns, from True Grit and Unforgiven to Sergio Leone’s spaghetti Westerns, as well as the cheese-filled kitsch of Dances With Wolves. Coyote Doggirl is a product of both her love of the genre and her frustration with its limitations.“I find Westerns to be very romantic,” Hanawalt said to Artsy, “but most of them are also very racist and misogynistic, and they’re always told from a male perspective.” 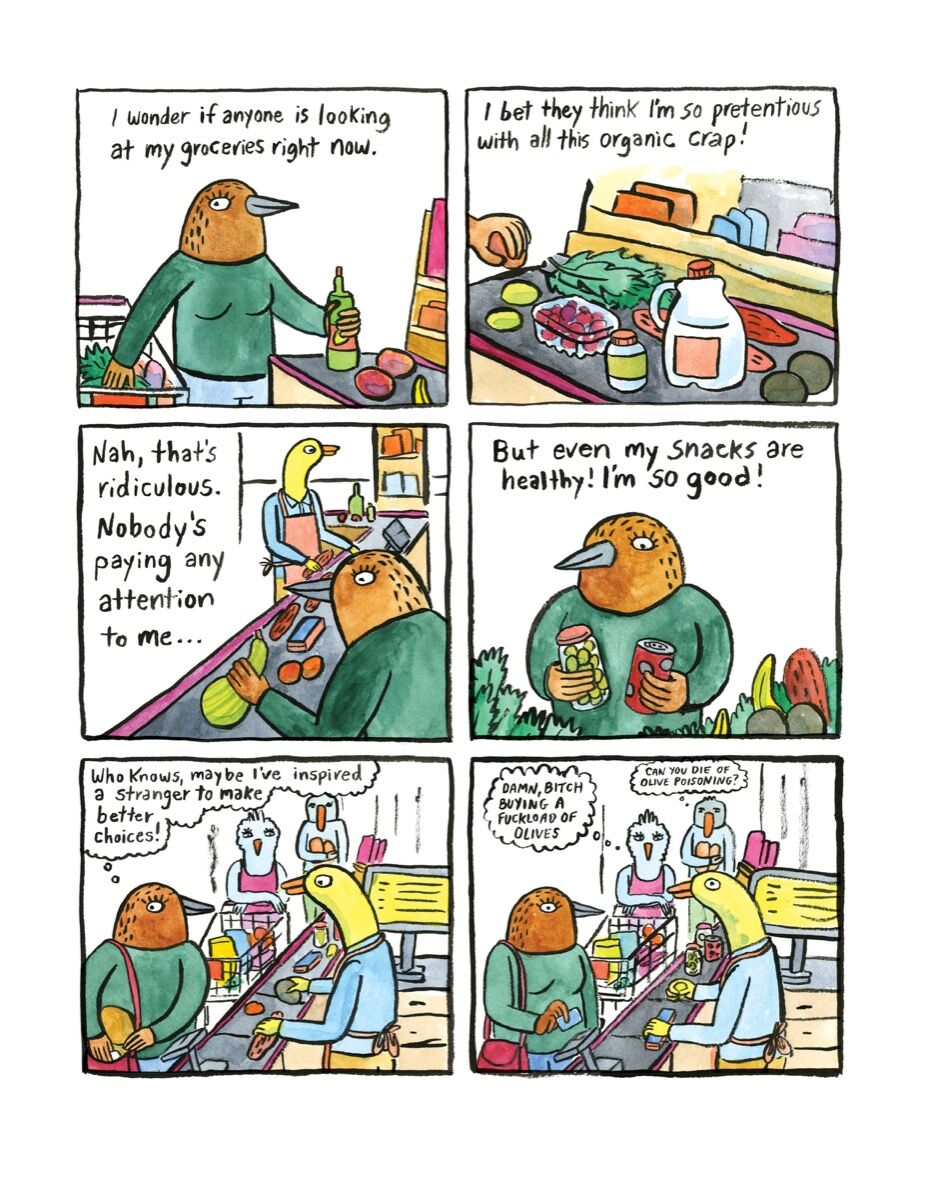 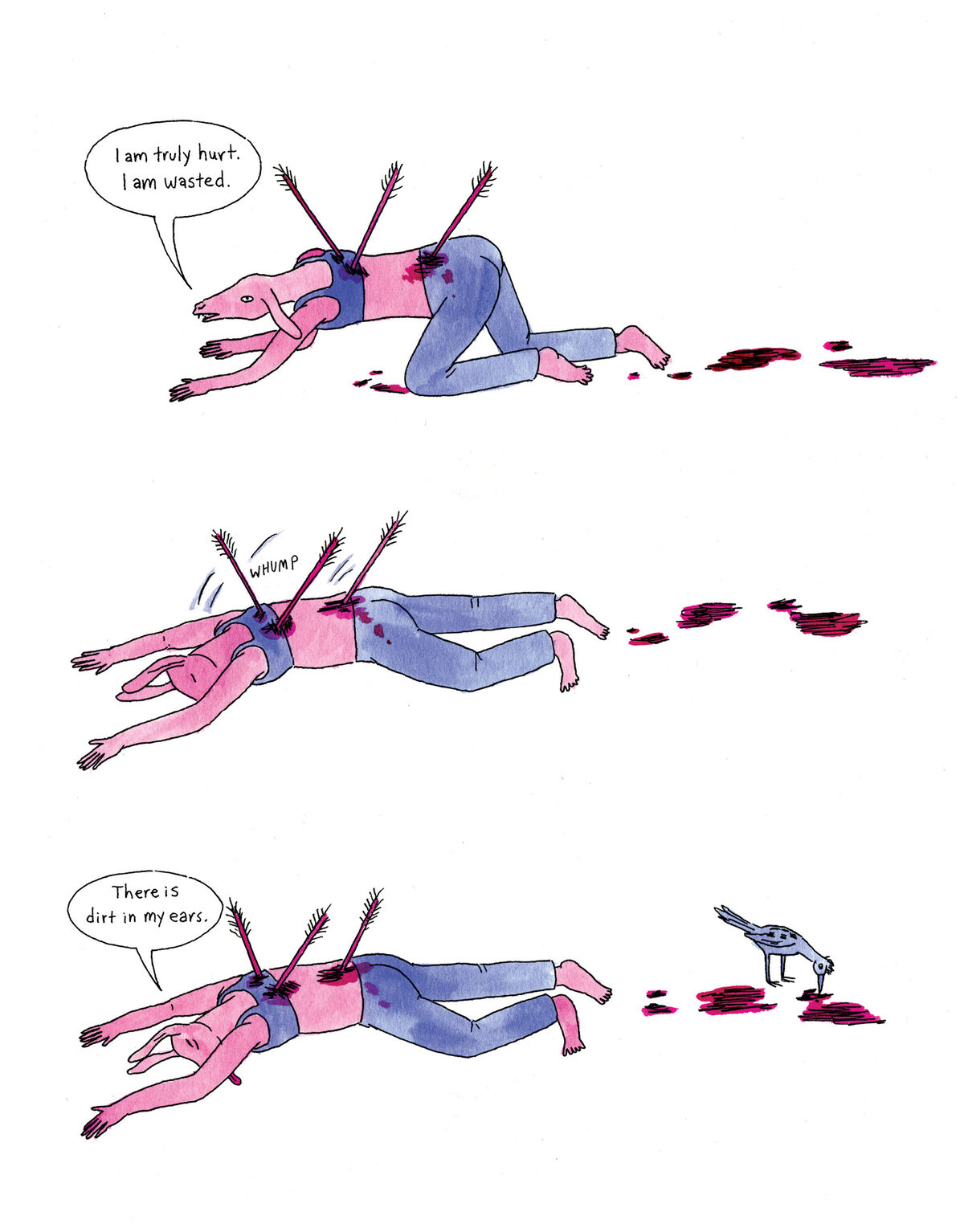 Hanawalt believes in the importance of women telling their own stories, where they can be heroes and villains, not victims or merely plot devices to inspire a male protagonist’s journey. “Even in Unforgiven, [it] is basically a Clint Eastwood revenge fantasy [that happens] because these sex workers have been cut up by bad guys,” she explained. “It’s a story about female pain told by men, for men.”
When we learn from whom Doggirl is running and why, her storyline begins to resemble a Clint Eastwood drama, but with a role reversal: After she cuts up a bad guy in self-defense, the consequences chase her throughout the book. Underneath the pithy dialog and dreamy watercolors of a children’s book, Coyote Doggirl has the dark heart of the bleakest Western. Critters are caught and roasted on a spit; a horse breaks a leg and ends up in a desert grave; and the blood of a bad man is spilled across a bed. “I like upbeat stories in general, but I also have a lot of dark images in my head and a lot of violent nightmares,” Hanawalt admitted. “Sometimes I do get those out through my work.”
Luckily, Hanawalt wasn’t raised to shy away from the ugly parts of life. She remembers a time when her father, a molecular biologist, excitedly showed her a video of cancer cells multiplying. “I learned to appreciate the beauty in something, even when it’s sort of hideous on the surface,” she said. Hanawalt’s work often combines a scientist’s curiosity with the playful logic of a stand-up comedian whose observations remind us that ordinary life is often absurd. Why are humans the only animals who drink Vitamin Water, wear guayabera shirts, practice Reiki, and write memoirs? 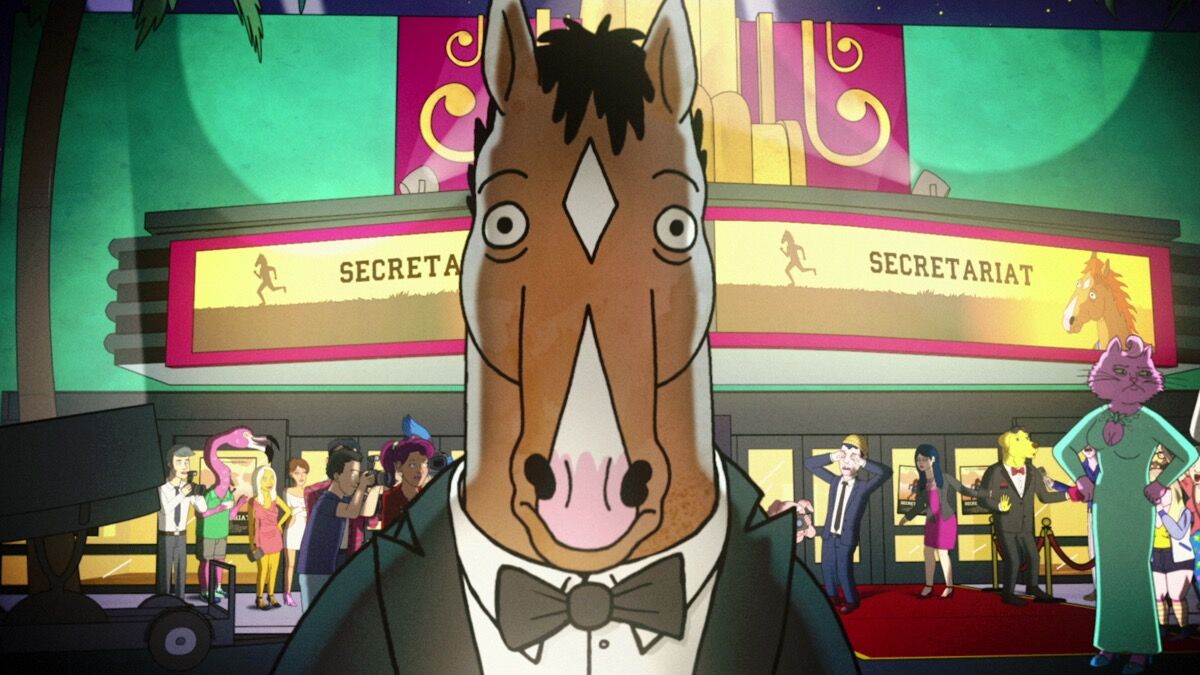 Advertisement
The silliness of watching Hanawalt’s creatures act out our petty human dramas reminds us that, in terms of the natural world, we’re weirdo outliers—just giant monkeys in pants. “Humans are an abomination of evolution,” she joked.

Lisa Hanawalt
View Slideshow
6 Images
Hanawalt grew up in Palo Alto and studied art at the University of California, Los Angeles. After a five-year sojourn in Brooklyn, she returned to Southern California in 2014 to illustrate BoJack Horseman (which was created by her friend and collaborator, Raphael Bob-Waksberg). She loves Los Angeles, though there’s a certain irony in moving back to California to work on a series that chronicles the bleakness of Hollywood and the pitfalls of fame. “I’ve religiously studied gossip blogs for a decade now, and I fully embrace the ickiness of L.A.,” she said. “We all talk about how we want to work in Hollywood for 10 more years and then save up all our money and move away, but to some degree, we must love it.”
Although it’s nominally the story of a horse-headed TV star in dissolute middle age, BoJack takes an unflinching look not only at the unsavory aspects of the entertainment industry, but at ordinary sorrows like alcoholism, depression, trauma, and aging. (The first time Hanawalt read the script, she told Bob-Waksberg that the show was too dark.) Despite its colorful palette, frequent gags, and characters with names like Mr. Peanutbutter and Sextina Aquafina, the series seems engineered to scramble your insides into a thick and creamy smoothie of sadness. “Time’s Arrow,” season four’s penultimate episode, told the story of BoJack’s mother’s broken dreams, and his father’s infidelity through the cracked lens of his mother’s dementia. 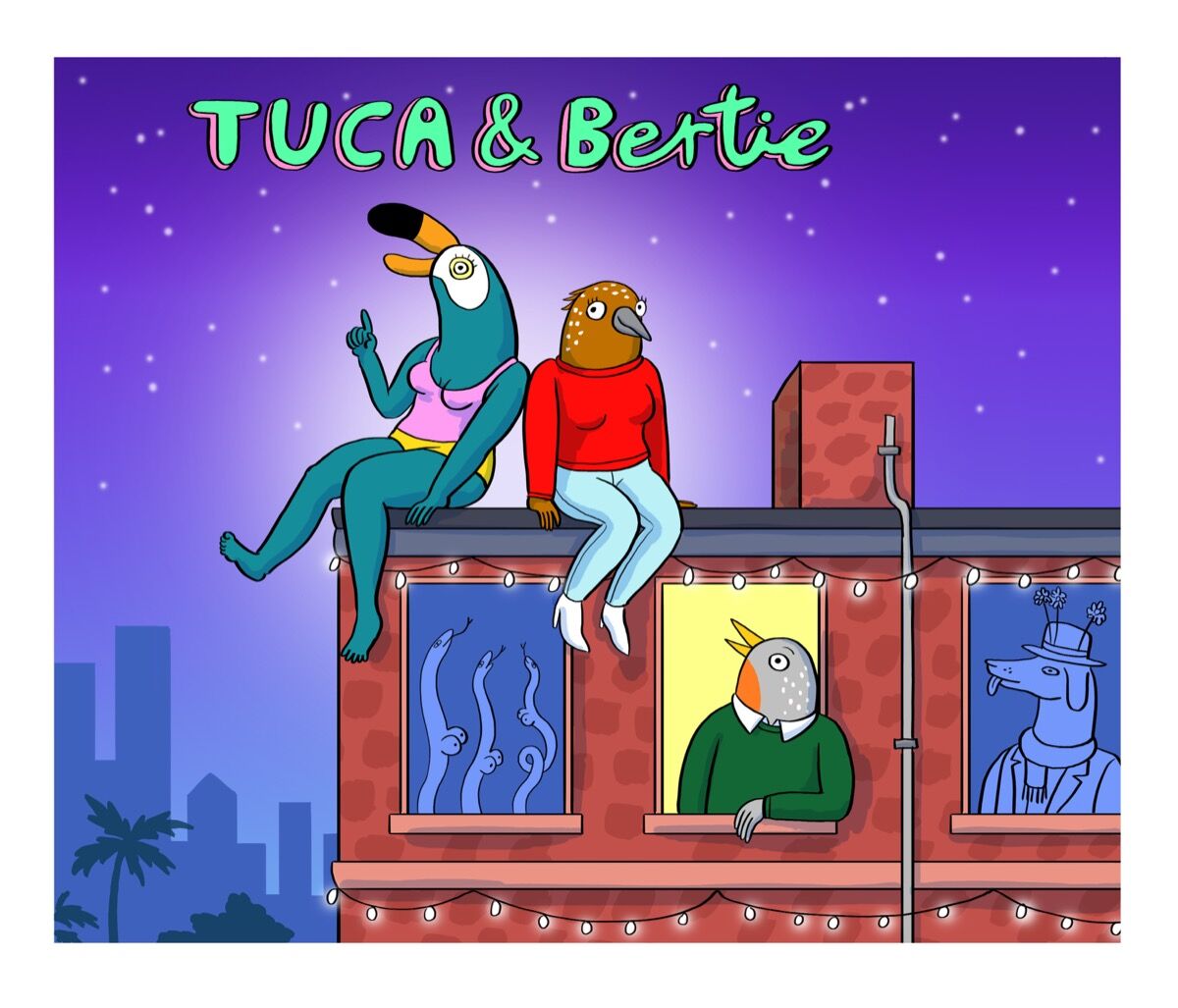 Even Hanawalt is not immune to the show’s emotional gravity. “I cry a lot when I’m working on an episode that’s really sad—when I’m reading the script or watching the animatic, it really hits me. The stuff about BoJack’s mom is devastating,” she said. Although it can be painful at times, she doesn’t view her sensitivity as a flaw. She’s begun to see the ability to experience empathy and connect to other people as an asset. Even in the traditionally male-dominated world of TV production and high-stress writers’ rooms, being a strong leader doesn’t mean having to quash your emotions. “I used to really value people who seemed emotionless or cold because they seemed self-reliant,” she explained. “Now I’m starting to see that that’s bullshit.”
Hanawalt’s new animated comedy, Tuca and Bertie—the character Tuca comes from her book Hot Dog Taste Test—is currently in the thick of production. Although she’s tight-lipped about the details, Netflix did announce earlier this year that comedians Tiffany Haddish and Ali Wong had signed on to play the title characters: a cocky toucan and an anxious songbird who live in the same apartment building.
Tuca and Bertie, a show that can truly be called Hanawalt’s own, is the logical next step in her career, but it also presents a lot of firsts: her first time writing a half-hour comedy script; her first time leading a writer’s room; and her first time as the big boss. It’s a shift that has only deepened her instinctive feeling that embracing vulnerability and strangeness might be a key to success. “Now that I’ve experienced running my own show, I think it’s okay to be a soft little weirdo wimp,” she mused. “It’s okay to be a sweetie.”
Ariela Gittlen
Related Stories