The Boom in Pop-Up Galleries Is Only Just Getting Started 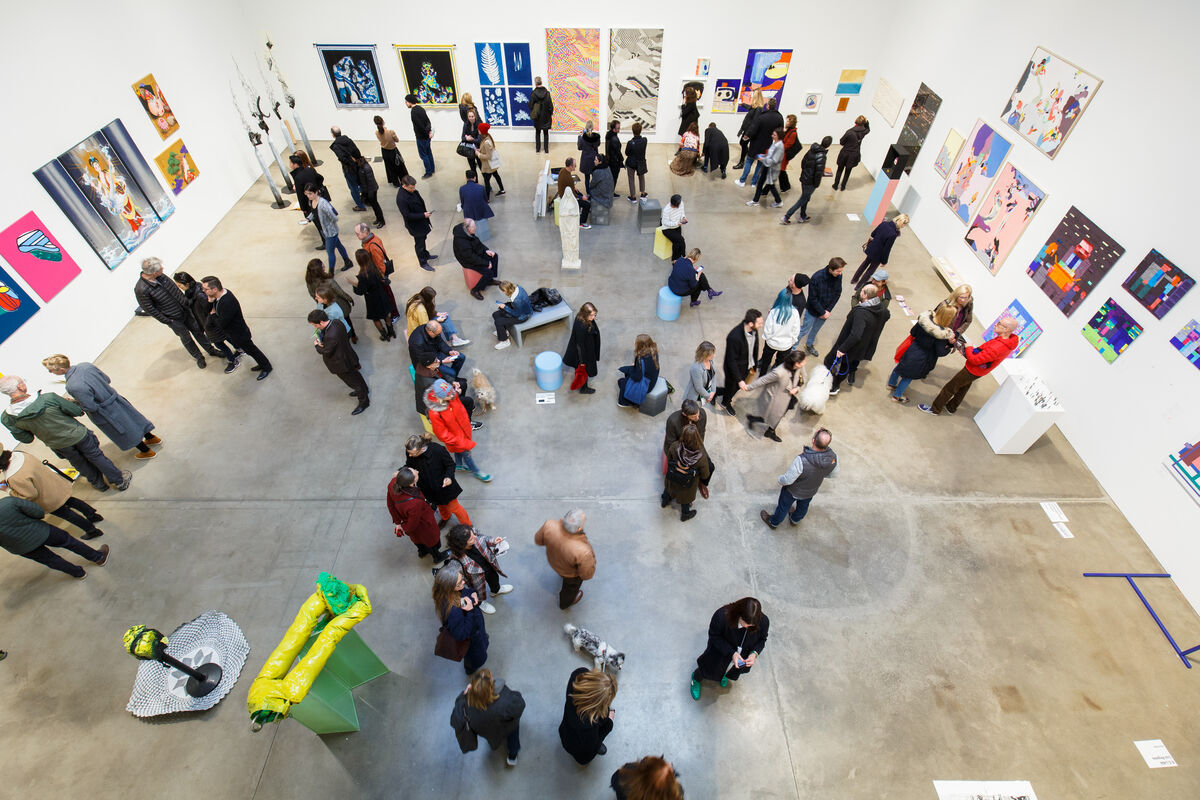 Installation view of “Plan B,” 2019, at David Zwirner, New York. Photo by David Willems Photography. Courtesy of Plan B.

As collectors flocked to Manhattan’s west side for The Armory Show last week, a coterie of 32 galleries affected by the abrupt cancellation of the Volta satellite fair took over part of mega-dealer David Zwirner’s West 19th Street complex and a vacant space on West 21st Street.
The upstart fair, dubbed Plan B, was born out of necessity. Zwirner, 1969 Gallery’s Quang Bao, artist payment platform RiSBE, members of the Volta team, and collector Peter Hort and the Rema Hort Mann Foundation banded together to find a solution to an extreme and unfortunate situation. But in doing so, Plan B’s organizers also demonstrated the flexibility, inventiveness, and cooperation that many smaller and mid-size galleries increasingly rely upon as they try to find creative ways of staying in business.
Dealers reported 46% of their sales by value taking place at fairs in 2018, according to economist Clare McAndrew’s report The Art Market 2019, published last week. But dealers also said they’d spent an estimated $4.8 billion attending fairs in 2018, up 5% from 2017. What’s more, returns in the art market have increasingly concentrated at the top end of the market; dealers with annual turnover between $10 million and $50 million saw their businesses expand by 17% last year, while small and emerging dealers with an annual turnover of less than $250,000 saw a contraction of 18%.
Nurturing new markets was identified as the foremost challenge for galleries in the next five years, according to the report. And increasingly, dealers are exploring alternatives to just doing more fairs in order to access new markets, from gallery-sharing models and pop-ups to gallery weekends and more. Now, other art market players are starting to cater to this demand.

Fair enough, or no fair? 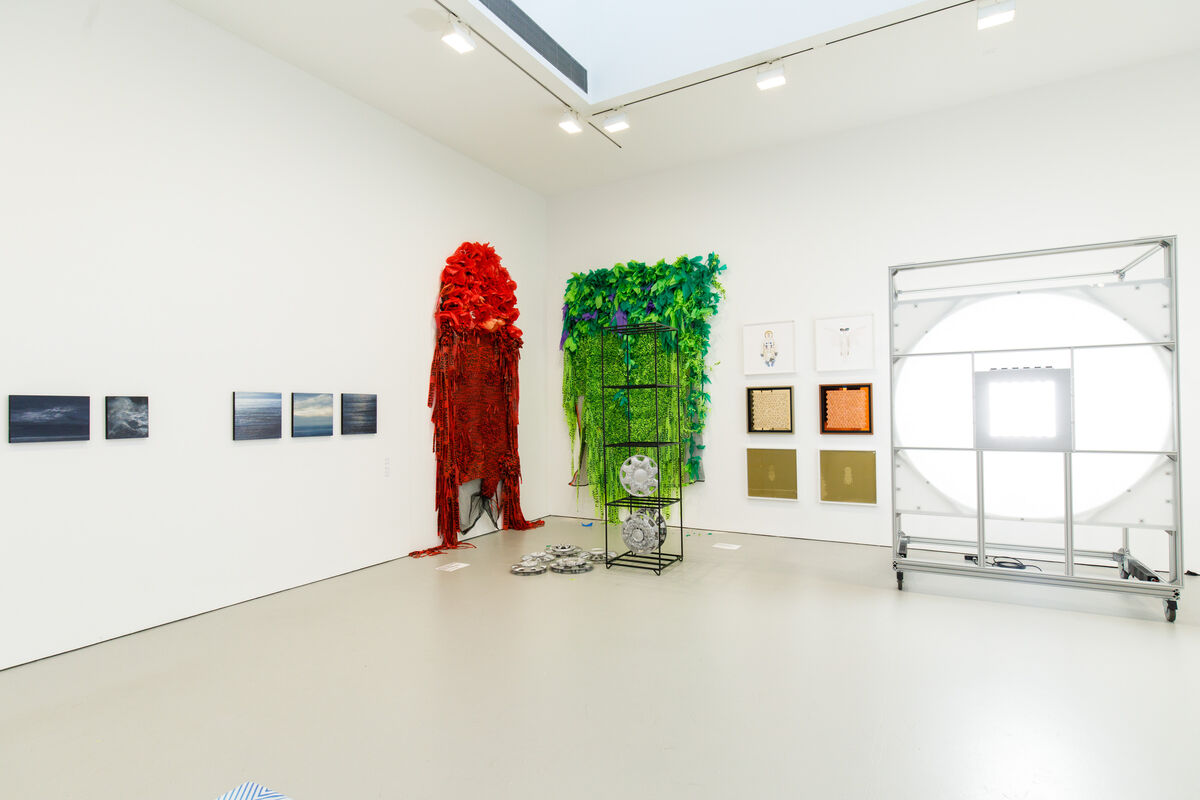 Installation view of “Plan B,” 2019, at David Zwirner, New York. Photo by David Willems Photography. Courtesy of Plan B.

Hort said that art fairs themselves are a key contributor to the squeeze on galleries’ bottom lines. “It’s extraordinarily difficult for smaller, emerging, and mid-size galleries to participate in this art market model that revolves around fairs,” he said. “It wasn’t by design, but Plan B really hit on something—it was much more of a communal fair, it was inexpensive, and the art world really came and was supportive.”
Exhibitors paid $2,000—or about the price of 2.5 square meters at Art Basel—to show at Plan B.
Zwirner had raised the issue that fair costs pose to the viability of young galleries last year, and floated the idea of having major galleries like his pay a tax of sorts to help support smaller ones; several of the world’s biggest fairs have since adopted something in that vein, with tiered pricing for booths. Hort explained that an art market model that doesn’t support small and mid-size galleries ultimately wouldn’t support artists.
“You can’t have a vibrant, healthy art community here in New York with only major galleries, you need feeder galleries and nonprofits and artist-run spaces, and artists’ studios,” he said.
Volta wasn’t the only fair that sat out this Armory Week after being shut out of its usual venue. The New Art Dealers Alliance (NADA), a nonprofit that supports emerging contemporary art dealers and has some 150 members around the world, usually holds a New York fair in March. It opted to cancel its 2019 edition after losing the contract on its most recent location, and will focus instead on tours and programming within members’ brick-and-mortar spaces around the city—as well as pop-up shows organized by members including Düsseldorf’s Golestani, Franz Kaka from Toronto, and Patron from Chicago.
NADA director Heather Hubbs said that a saturated market of fairs, along with the loss of the venue, drove her organization to rethink the event it would put on in New York. She said initiatives like its New York Gallery Open can cut down on some of the stresses and expenses of participating in the fair circuit, which are felt most acutely by smaller galleries, while allowing members to tap into the critical mass of collectors in town for a fair.
“Fairs are useful and important to some degree,” Hubbs said—adding, however, that feeling obligated to participate in an unsustainable number of fairs and compete for spots in the biggest and most expensive among them can take a toll on galleries’ finances and their programming at their home base.
“That pressure is really unhealthy,” she said.

Galleries go on the road 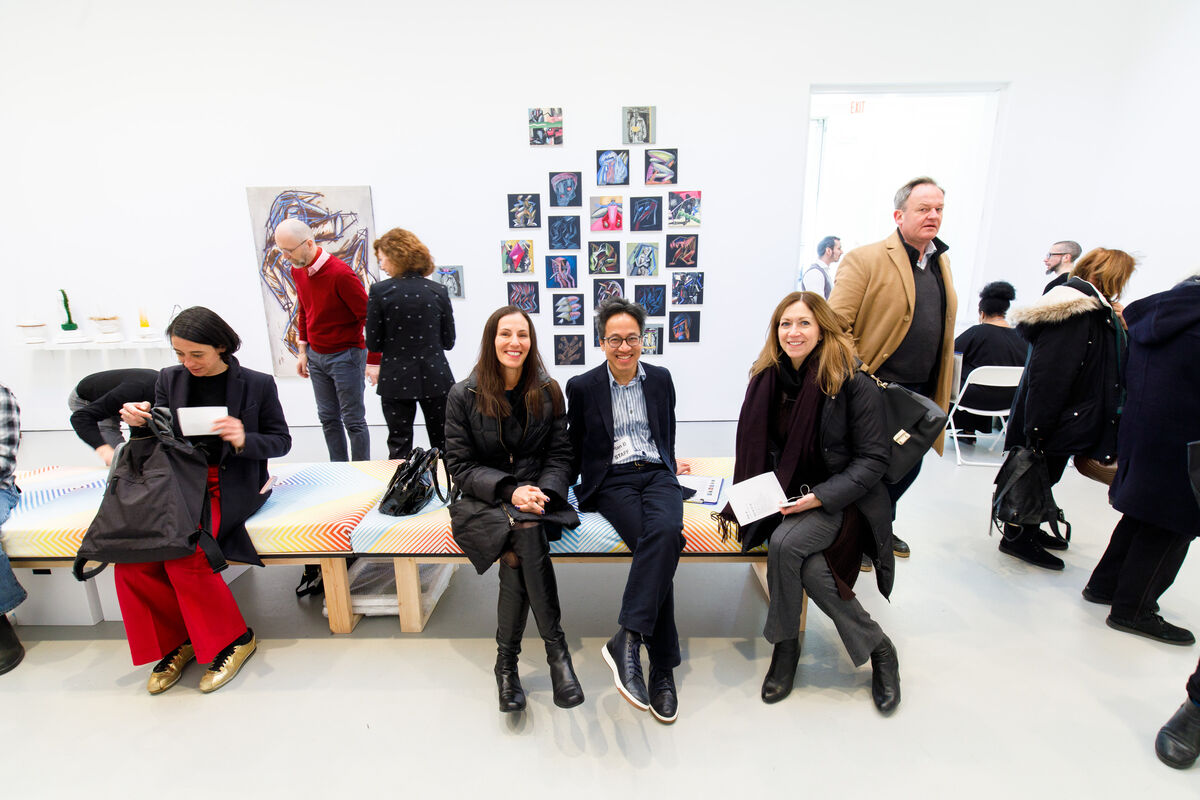 Advertisement
The risk of a fatal fiscal flop and frustrations with the frenetic pace of fairs have led small and mid-size galleries to include nomadic programming as part of their business model. Initiatives like the city-hopping, gallery-swapping initiative Condo and the timeshare-like New York City space Vacation help galleries realize projects and connect with communities and collectors far from their home bases, without the onerous costs and short timeframe of conventional art fairs. Other galleries have gone out on their own to rent temporary spaces in cities during weeks with other major art events.
Four-year-old Chicago gallery Patron was in New York during Armory Week. But instead of paying for a fair booth and squeezing their programming into it, co-founders Julia Fischbach and Emanuel Aguilar found a vacant storefront space on the Lower East Side and put up a two-person exhibition, pairing photographs by
Myra Greene
with paintings by
Greg Breda
. Their decision preceded NADA’s Gallery Open, but benefited from it nonetheless, Aguilar said.
“We had thought about this before NADA had announced that they weren’t doing a fair and they’re going to do this Gallery Open, and it just worked out really perfectly,” he said. “Last year, we did both Armory and NADA New York in the same week, and it was a very weird experience because NADA ended up being more profitable—it cost a fraction of our booth at Armory—but we had the whole staff here, and that was exhausting and it wasn’t fun.”
A week-long pop-up in a vacant storefront can be a bargain compared to the cost of a booth in the emerging sector of a mega-fair. According to an Artsy survey, a booth in the Statements sector of Art Basel in Basel last year cost around $50,000, including travel, shipping, lodging, and other expenses. The fee for the cheapest booths at The Armory Show is around $10,000; Aguilar said Patron spent about the same amount on its four-day stint on the Bowery last week—but had significantly more space to show off its program.
Being based in Chicago, where Aguilar said the gallery’s overhead is about a third of what it would be in New York or Los Angeles, gives Patron the financial leeway to do pop-up exhibitions and events in other cities.
“Julia and I are in New York or Los Angeles almost every other week, so we have a very strong presence in these art hubs,” he added. Perhaps counterintuitively, not being based in New York has allowed them to get more facetime with key players when they are there than Aguilar thinks would be the case if they were based in New York full-time.
“There’s this sense of novelty, so people make time, and you’re able to get on people’s schedules,” he said.
Other emerging galleries didn’t see the need to forgo participating in a fair in order to do a pop-up show, but rather saw one as additive to the other. London’s Emalin both showed at Independent and opened a month-long exhibition of Russian sculptor
Evgeny Antufiev
’s work within Alyssa Davis Gallery in the West Village. Emalin’s co-director Angelina Volk said that she and co-director Leopold Thun wanted to create more time and space to connect with collectors and curators outside of the fair context where “the pace is fast and the days are few.”
For Thun and Volk, galleries banding together to create projects like Condo is not only a product of the gallery world’s stark contrast in returns—where mega-galleries operate spaces that increasingly function like museums, while emerging dealers run shoestring operations—but also a generational phenomenon spearheaded by younger gallerists who have a more open and collaborative approach.
“It feels like there is an increasing tendency towards initiatives that attempt to rethink existing models of how commercial galleries can operate,” Volk said. “It’s very exciting and rewarding to participate in a community of young businesses renegotiating what it means to run a commercial gallery today.” As the number of nomadic and pop-up-prone galleries has expanded, other players in the commercial art world have begun to cater to this demand. One new player is the World Art Lounge (WAL), a project launched last month that aims to provide member galleries with the logistics to support pop-up exhibitions and other nomadic programming around the world. WAL’s founders come from a range of art-industry backgrounds, and include the former general manager of French art fair FIAC, Jean-Daniel Compain; Christie’s veteran Jean-Christophe Harel, who launched the Paris Photo fair’s Los Angeles edition; and Cyrille Troubetzkoy, who ran the Paris gallery La Blanchisserie.
“Instead of offering a space somewhere and then having 100 galleries or 200 galleries come together, we thought about something more flexible and smaller in size,” Harel said.
WAL plans to organize pop-up exhibitions and other events at a range of venues around the world for anywhere from 1 to 15 galleries at a time. The first exhibition will take place in early June in Paris, where WAL, in partnership with the Mobilier National, will stage an exhibition at the Galerie des Gobelins.
Member galleries will pay a one-time joining fee of €1,200 ($1,400), plus annual membership fees of €900 ($1,000) or monthly fees of €75 ($85), in exchange for the opportunity to participate in WAL-organized exhibitions and the chance to leverage WAL’s infrastructure to initiate their own pop-up projects. In addition to the venue, WAL plans to offer galleries support and logistics, from hiring gallery attendants on the ground in a given locale and printing flyers and press releases to shipping organization, concierge services, and publicity.
“We’ve heard for so long that galleries don’t like to work together,” Harel said. “But more and more, there’s a new generation of galleries that are organized in communities.” WAL wants to service those communities, he said.
Even fairs, oft-cited as major contributors to the stresses felt by small and mid-size galleries, are catering to this sense of community and cooperation amid a new generation of dealers. Much like Independent, which operated a year-round space in Brussels from 2015 through 2017, the Dallas Art Fair recently launched a permanent brick-and-mortar space in Dallas’s Design District, where it is giving its core exhibitors the opportunity to program large-scale exhibitions throughout the year. Dubbed 214 Projects, the new space opened on March 2nd with a solo exhibition of works by
Emmanuel Van der Auwera
, organized by Brussels-based gallery Harlan Levey Projects.
“We thought this would be an opportunity for galleries to be here for a few weeks and do a bigger project than what’s possible at an art fair,” said Kelly Cornell, the director of the Dallas Art Fair.
Setting up an outpost in Dallas for a few weeks, the thinking goes, could help out-of-town dealers make good on interest expressed by would-be clients during the fair.
“There’s more time to place the works,” Cornell said. “We can reach further, like to big corporations and collectors in Austin or Fort Worth, and greater Texas, than what is sometimes possible just during the weekend of the fair.”
Benjamin Sutton is Artsy’s Lead Editor, Art Market and News.
Related Stories