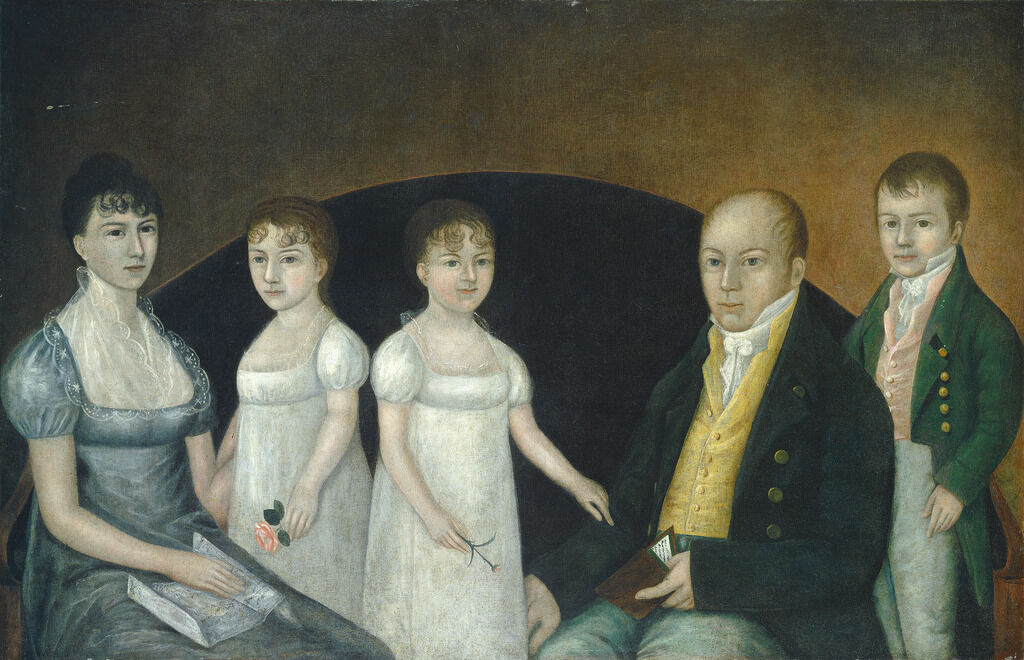 Johsua Johnson
Family Group, ca. 1800
National Gallery of Art, Washington D.C.
Historians know woefully little about
Joshua Johnson
, the first professional African American artist to work in the United States. An active painter in Maryland and Virginia from roughly the 1790s to 1825, Johnson was all but forgotten until the middle of the 20th century. In 1939, Baltimore genealogist and art historian J. Hall Pleasants attributed 13 paintings to Johnson and began the long journey of reconstructing his career through scraps of often contradictory information. Even the artist’s last name is uncertain, and many art historians are still debating whether it was spelled “Johnson” or “Johnston.”
Johnson was born into slavery in mid-18th-century Maryland to a white man and a Black slave woman owned by William Wheeler Sr. Chattel records note his race as mulatto, though Maryland had no legal definition for what constituted “Black” versus “mixed race” at the time. Pleasants located documents variously describing Johnson as a slave, a slave trained as a blacksmith, a Black servant afflicted with consumption, and an immigrant from the West Indies.
While much of Johnson’s history remains mysterious, his special place in art history is assured. The next renowned African American artists to emerge in the United States,
Robert S. Duncanson
and
Henry Ossawa Tanner
, followed Johnson by decades. 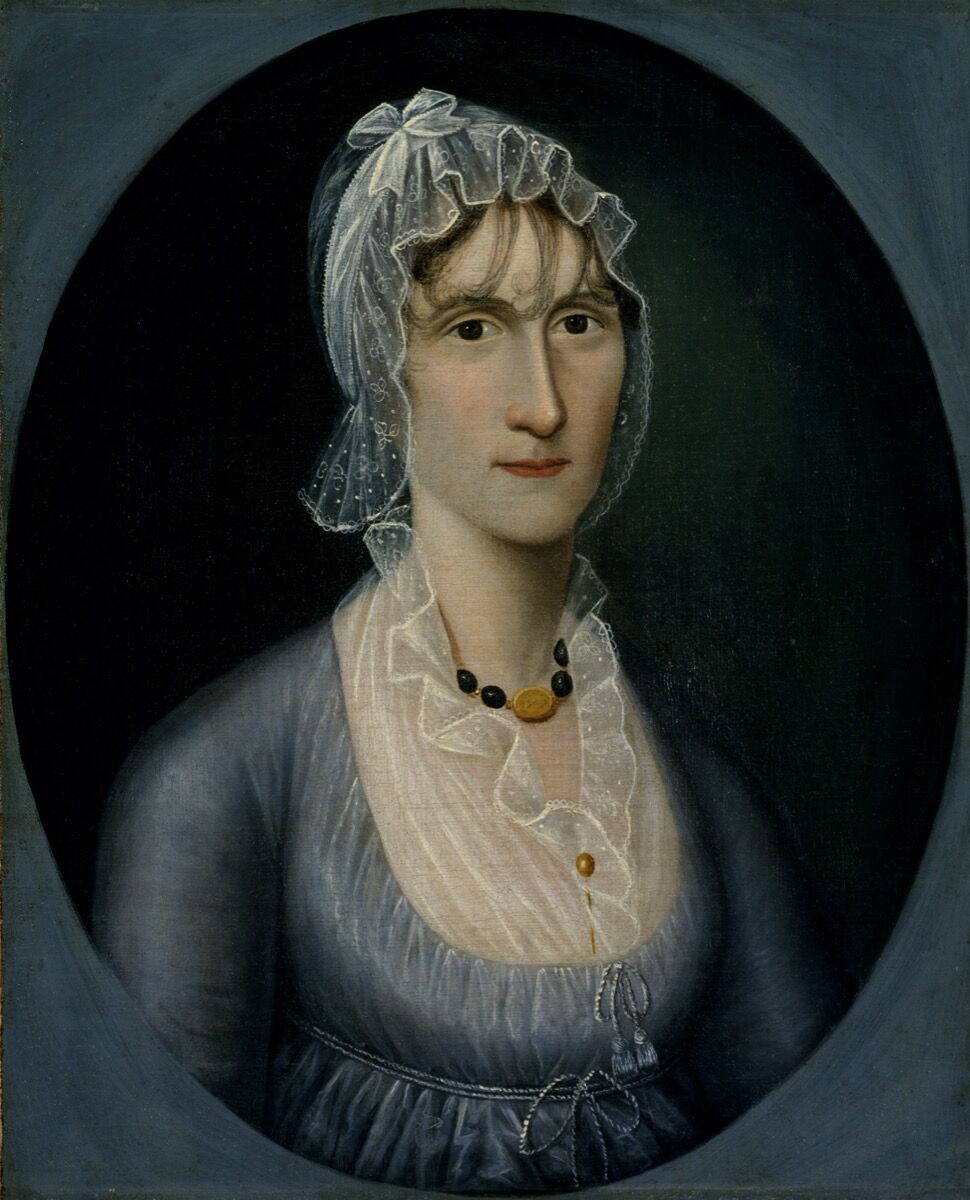 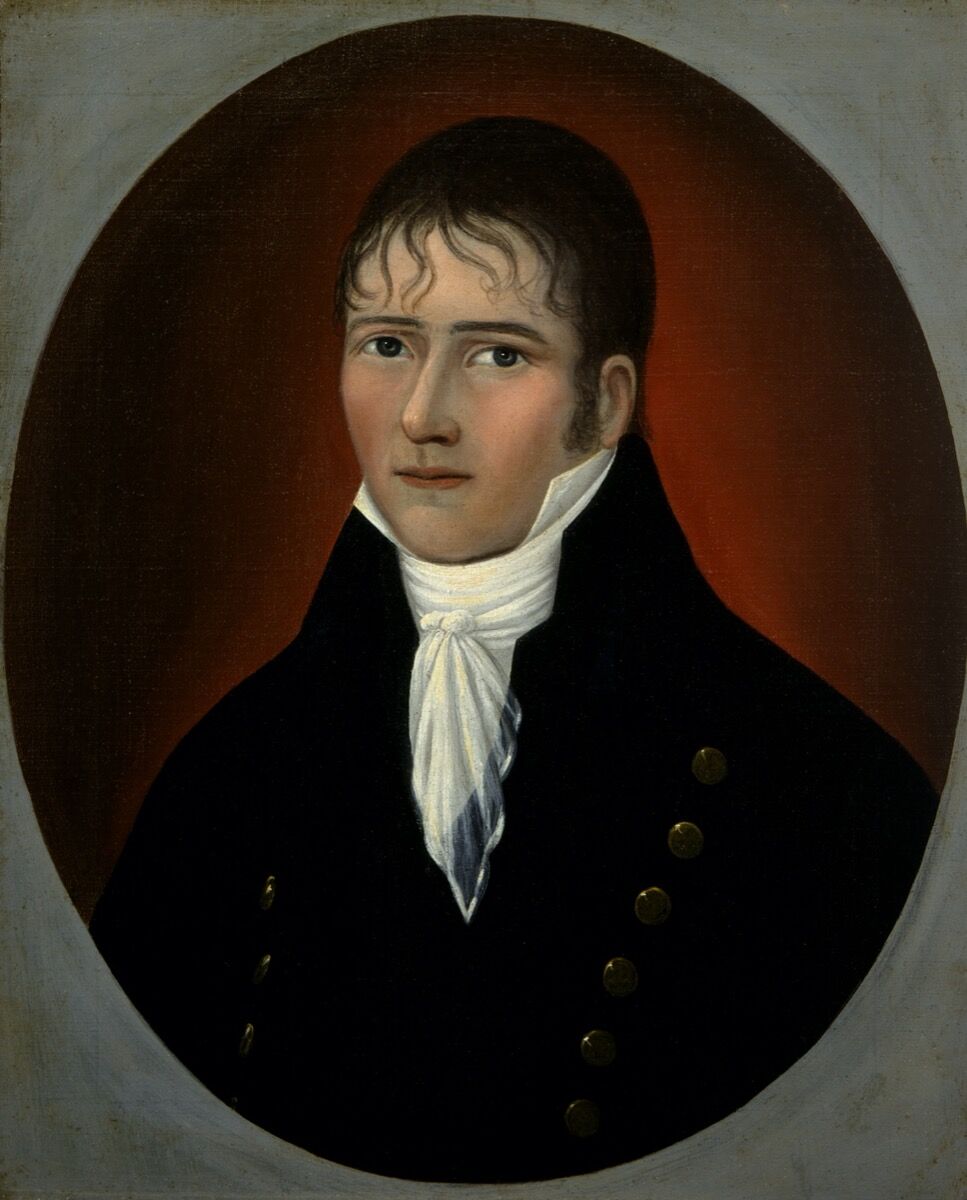 Johnson earned his freedom in 1782 after completing an apprenticeship with a Baltimore blacksmith named William Forepaw or Forepaugh. This was not unprecedented; in the 18th century, a small number of slaves and free African Americans worked as apprentices to white artisans. Before 1760, however, most trained craftsmen were either carpenters or cask repairmen. By the 1770s, they were engaged in a number of trades including shoemaking, blacksmithing, and tailoring.
During his time as a blacksmith, Johnson likely learned how to construct canvases and source painting materials.According to property records, Johnson moved often. He primarily lived in a section of Baltimore that was popular with furniture decorators, which suggests that he may have supplemented his income by painting furniture. 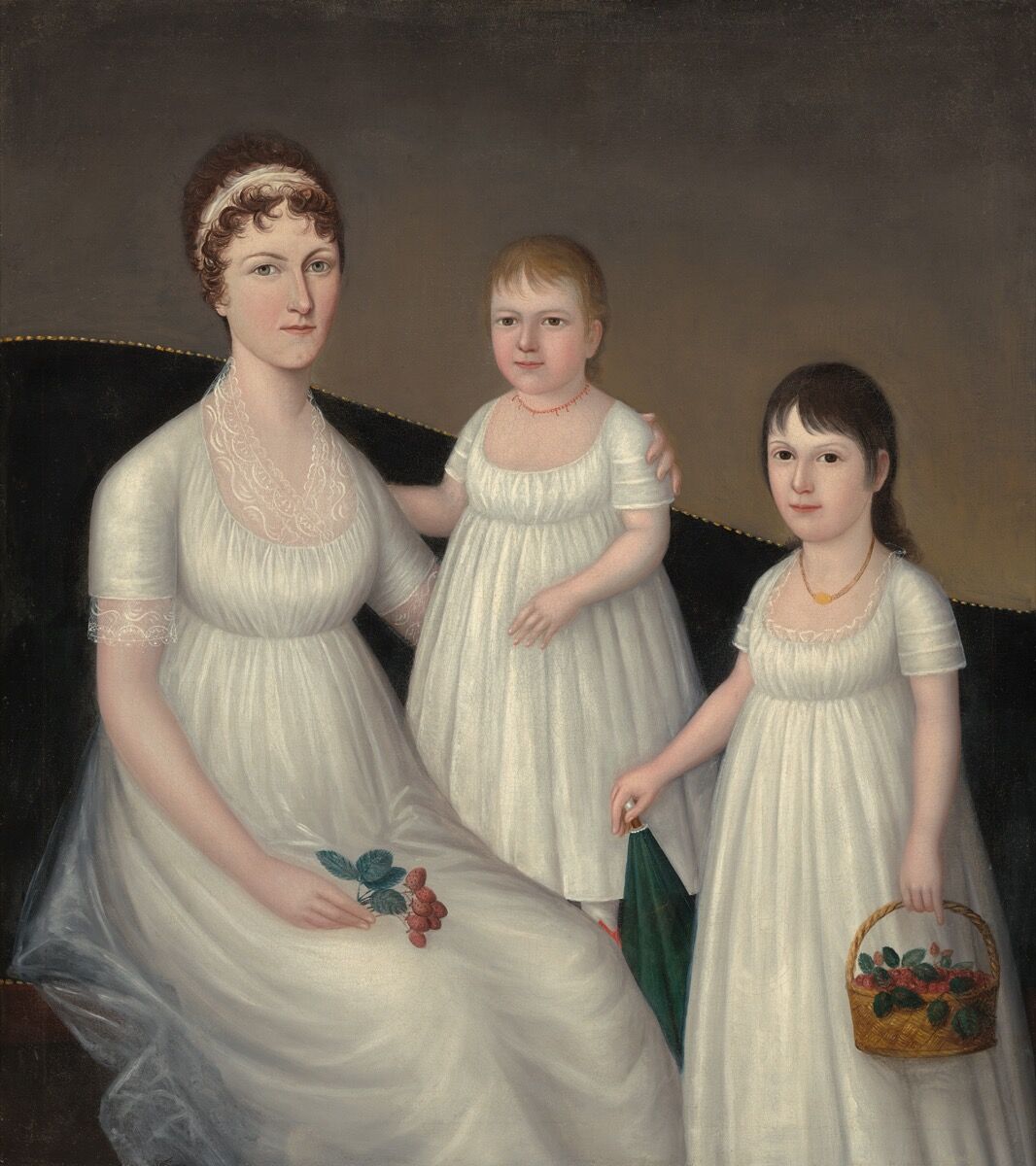 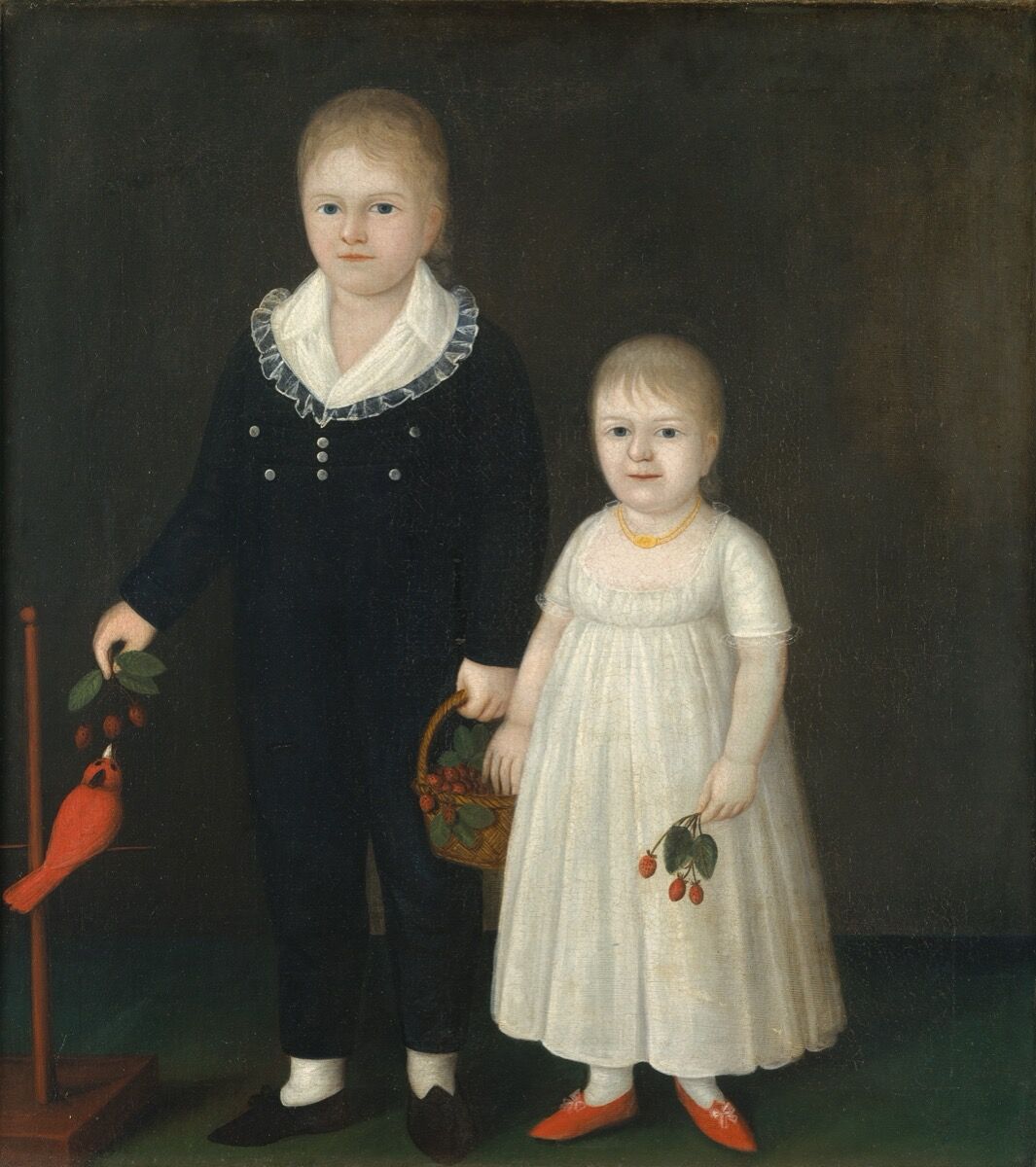 Advertisement
Baltimore was an excellent place for Johnson to take up portraiture, given its relatively open-minded attitude towards free Black people. In the 18th and 19th centuries, the city featured one of the largest African American populations in the United States. White workers seeking apprentices in Baltimore tended to ignore the Maryland laws that prohibited them from teaching trade, reading, and writing skills to free African Americans. Johnson was able to advance his artisanship here, becoming listed in city directories as a “limner,” or “portrait painter.” In newspapers, he advertised himself as a “self-taught genius, deriving from nature and industry his knowledge of the Art” who had “experienced many insuperable obstacles in the pursuit of his studies.”
Johnson’s portraits bear striking resemblance to those of
Charles Willson Peale
,
Charles Peale Polk
, and
Rembrandt Peale
, who were all members of a family of artists who worked throughout the East Coast. The similarities in poses, costumes, and technique have led some art historians to insist on Johnson’s association with the Peales, though others claim these elements have been greatly exaggerated—Johnson never apprenticed with the family. 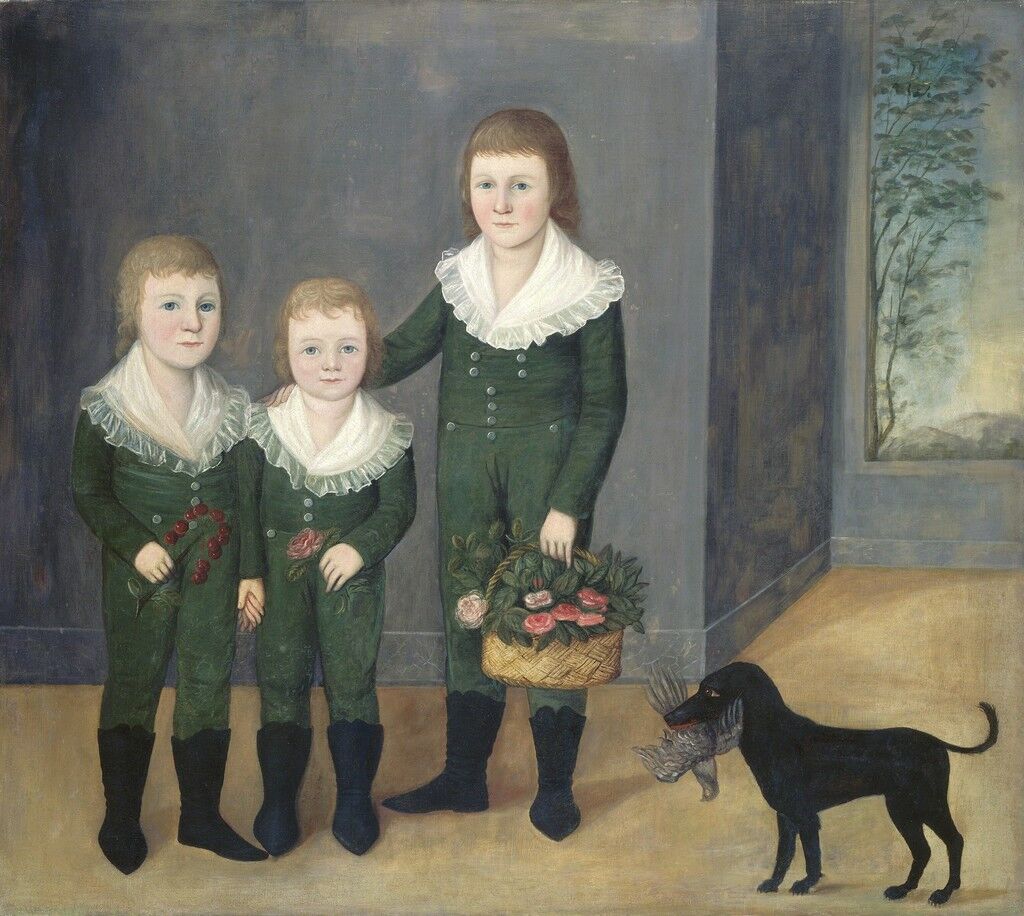 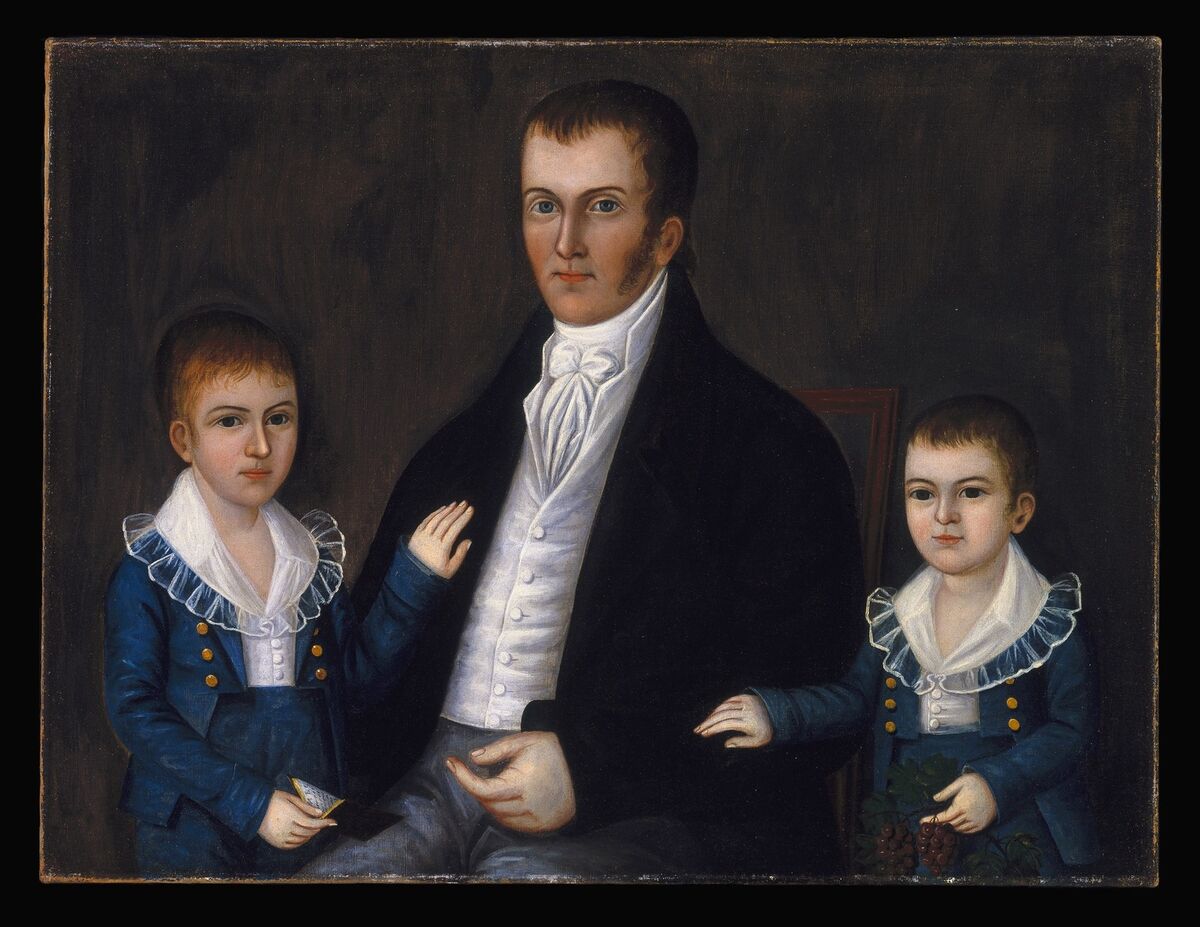 A National Gallery of Art catalogue similarly describes the naïveté of Johnson’s aesthetics: “Like many untrained painters, he established formulae for painting eyes, hands, poses, and costumes, which make many of his sitters resemble one another. There is little character penetration, but his subjects’ features are delicately rendered with subtle, thinly applied colors.”
Many of Johnson’s portraits feature families grouped together in similar poses, the children sitting in front of their parents. This multiple-figure, familial composition was uncommon in American art of the period.
Though over 80 portraits have been attributed to Johnson, only one features his signature: a portrait of Sarah Ogden Gustin, which was most likely completed in her home state of West Virginia between 1798 and 1802. Gustin was the wife of an innkeeper and militia colonel. Johnson probably traveled to complete the work, which suggests a reputation that crossed state lines. 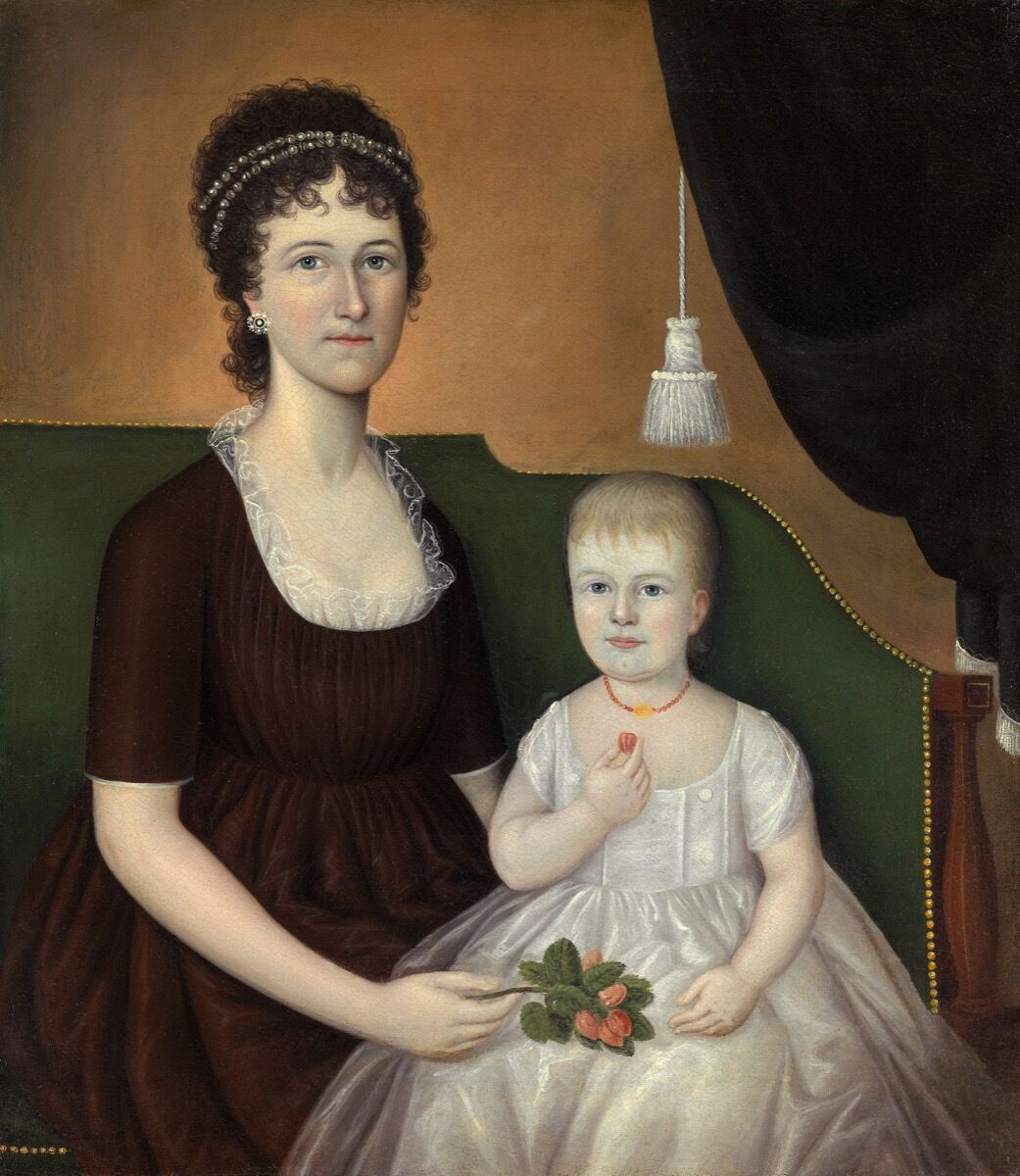 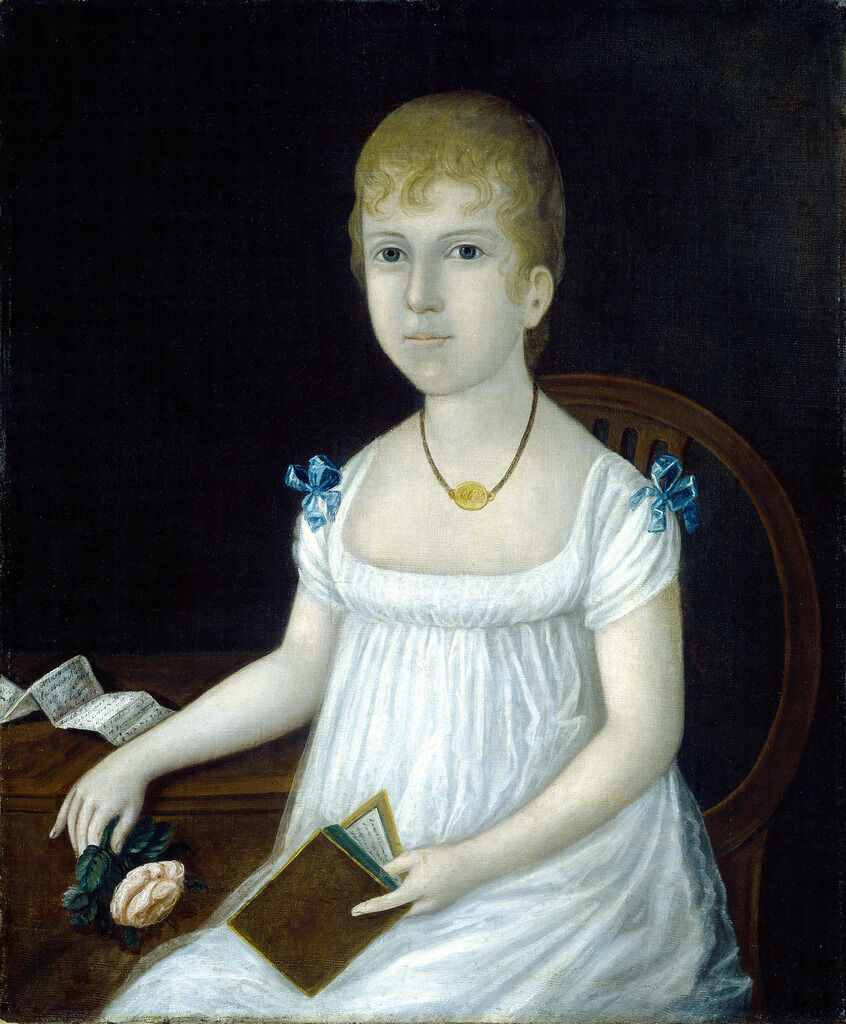 Johsua Johnson
Adelina Morton, ca. 1810
National Gallery of Art, Washington D.C.
The National Gallery of Art, the Baltimore Museum of Art, the Metropolitan Museum of Art, and several other institutions across the globe began acquiring portraits by Johnson in the middle of the 20th century; many were left to these institutions by the sitters’ offspring. The museums are still making sense of the artist’s legacy as well. According to Annelise K. Madsen, an assistant curator of American art at the Art Institute of Chicago, what we know about Johnson derives from matching documents, “pegged for the dumpster, that end up helping us understand the historical circumstances, the details, surrounding this person, this artist, and this American story.”
Jaelynn Walls is a curator and writer based in Texas. They are the 2019-21 Andrew W. Mellon Curatorial Fellow at the Museum of Fine Arts Houston and host of Art in Color, an educational Youtube series
Related Stories