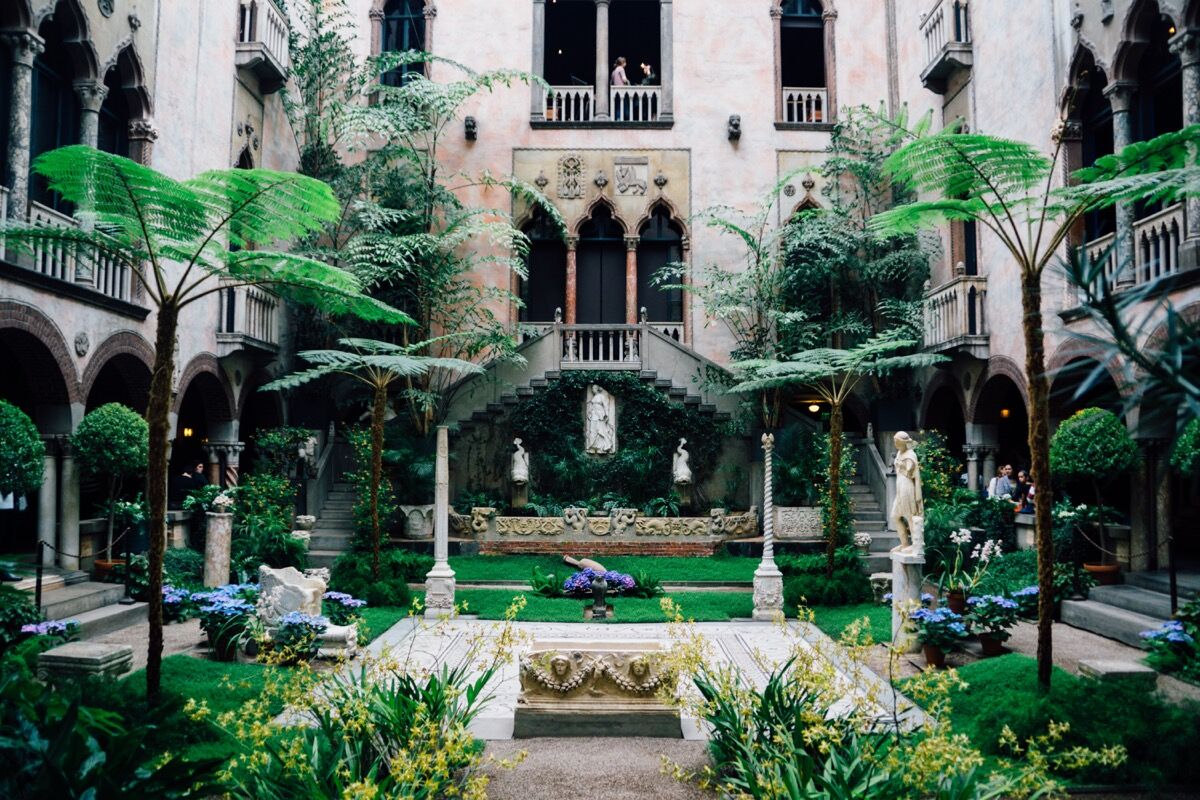 At Boston’s Isabella Stewart Gardner Museum, paintings by European heavyweights like
Sandro Botticelli
and
Henri Matisse
keep company with panel screens from the Japanese
Edo
period and wooden statuary from eleventh-century China. This artistic diversity is a testament to the multifaceted and worldly woman who built up the collection.
But it is the museum’s longstanding admissions policy that offers a glimpse of founder Isabella Stewart Gardner’s irrepressible personality. As her will dictates, any visitor wearing Red Sox memorabilia receives a discount, and any guest named Isabella may enter free of charge.
The Isabella of our story was born in New York City in 1840 to a family of wealthy linen merchants. Her early years mirrored those of other well-born ladies—she attended private schools at home and abroad, where she was educated in music, dance, and art, and studied languages useful for European voyages. 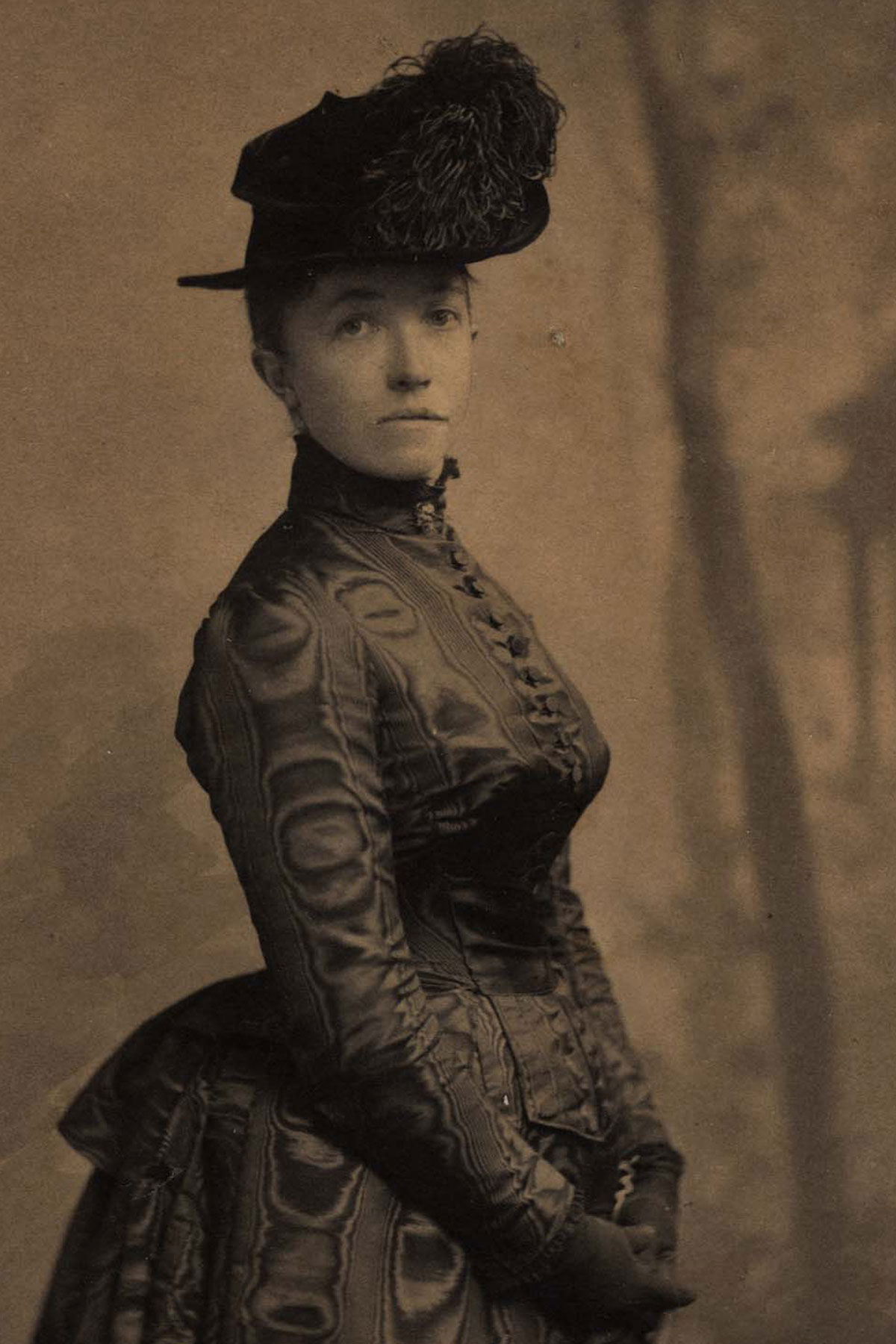 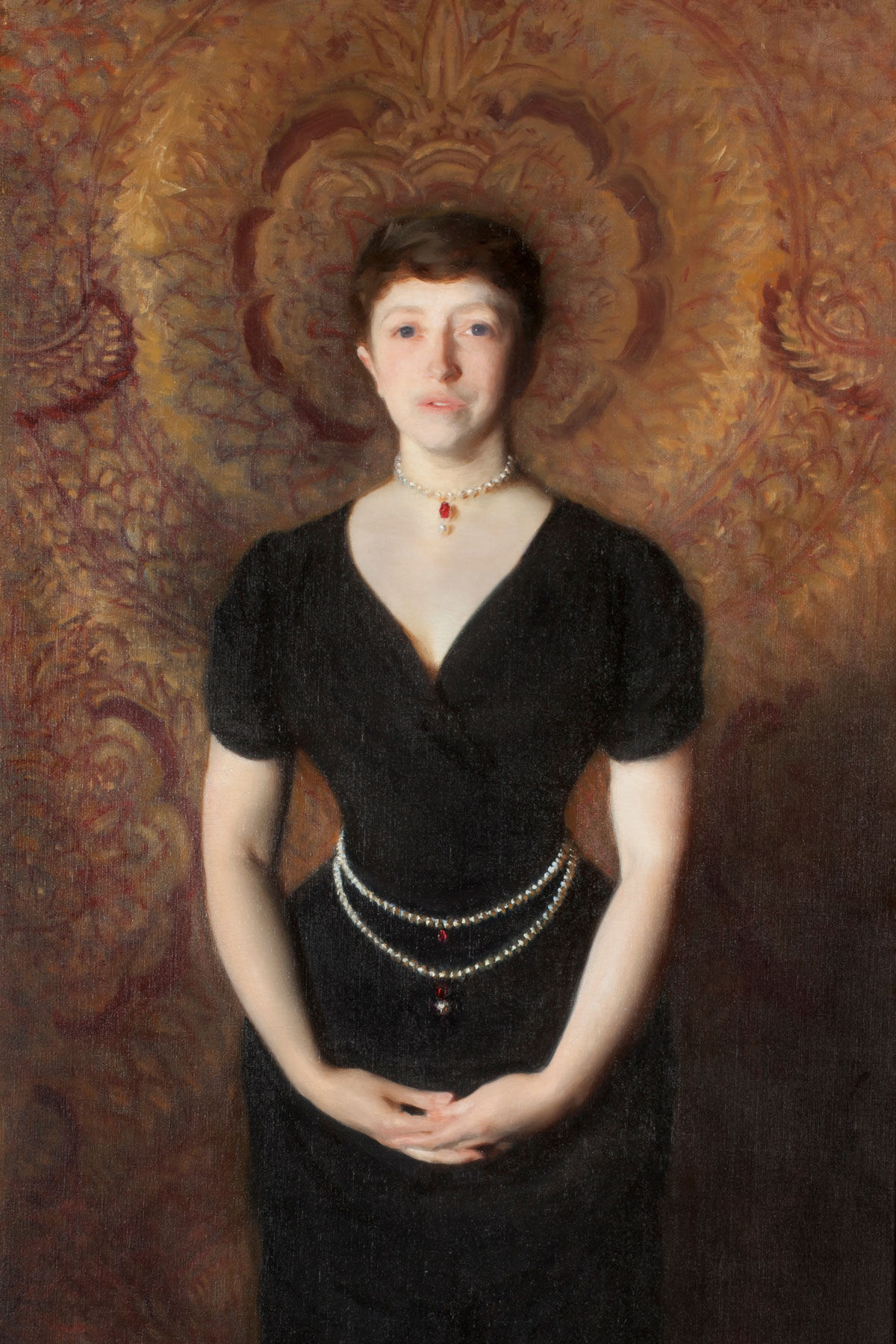 At twenty, Isabella married a man named Jack Gardner. The brother of one of her classmates, he was hailed as “Boston’s most eligible bachelor,” writes Douglass Shand-Tucci in The Art of Scandal: The Life and Times of Isabella Stewart Gardner. However, tragedy soon struck the couple. The Gardners buried their only son before his third birthday; following a subsequent miscarriage, Isabella was warned against any future pregnancies.
It was then, freed from the obligations of motherhood, that Isabella’s life began to diverge from the traditional. Already well-travelled and unhindered by financial concerns, she took her place as a vivacious, fashionable, and risqué member of Boston society. As Shand-Tucci recounts, she was known for smoking cigarettes and driving fast—and for popular stunts that rattled the conventions of Victorian-era Boston.
There was the time she sported a white headband, emblazoned with the words “Oh you Red Sox!” amidst the formalwear on display at a performance of the Boston Symphony Orchestra. Isabella’s zeal for sporting events made her a common sight at boxing matches and horse races. Once, according to the Boston newspapers, she was even spotted taking the zoo’s lions on a stroll through the park. 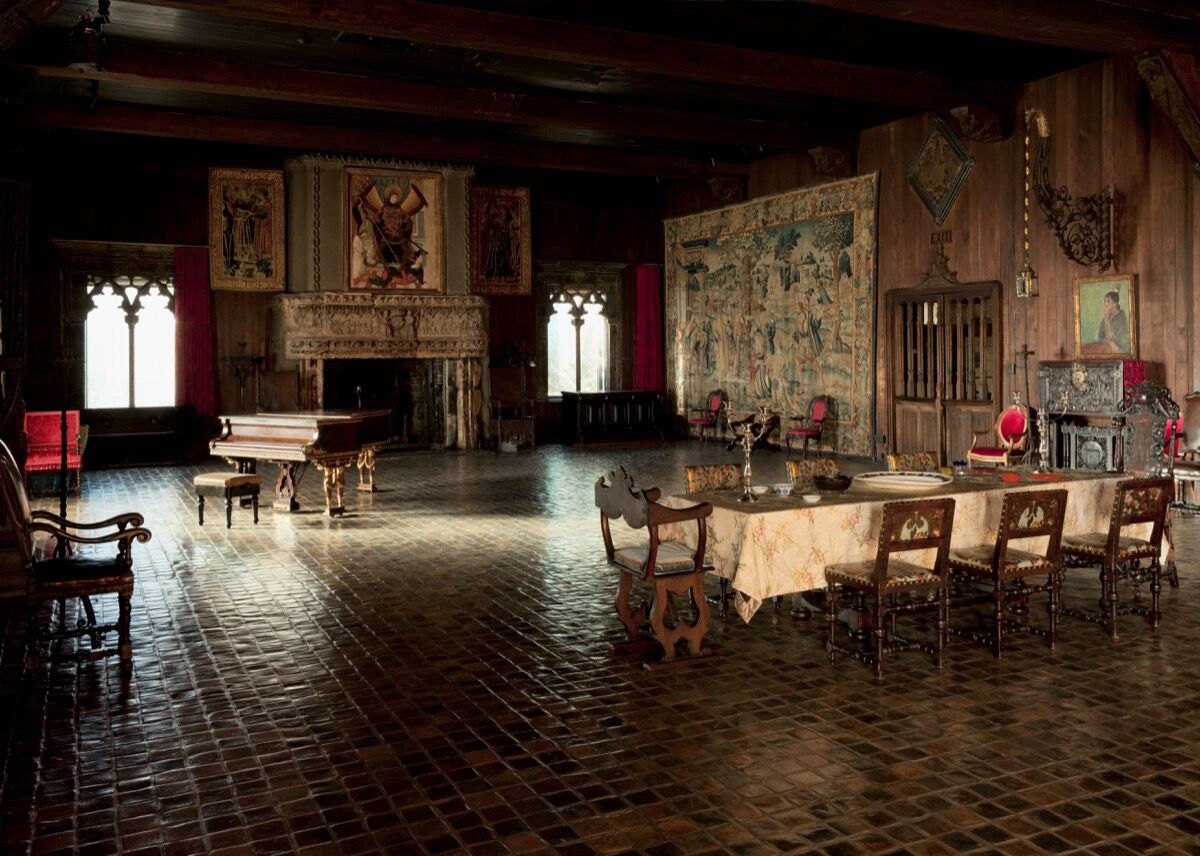 Advertisement
Isabella also cultivated relationships with notable artistic and literary figures of the age, including the painter
James McNeill Whistler
. Another friend, the American-born British author Henry James, introduced her to a painter who would come to hold great pride of place in her museum:
John Singer Sargent
.
Lauded for his portraiture, Sargent painted Isabella during a visit to Boston in 1888. Depicted wearing a low-cut, short-sleeved black dress belted with pearls, she demonstrates what some of her contemporaries derided as a “sensuous display of flesh.” Perhaps because of such gossip, Jack requested his wife abstain from publicly displaying the portrait during his lifetime. Instead, it hung in the museum’s Gothic Room amidst religious artifacts and altarpieces—a once-private gallery open to visitors today.
But Jack’s more conservative nature did not seem to dampen the couple’s close relationship. Amongst friends and family, Isabella’s nickname was always Mrs. Jack. And when her husband passed away unexpectedly in 1898, she decided to construct a museum to house the art and artifacts they had amassed together. 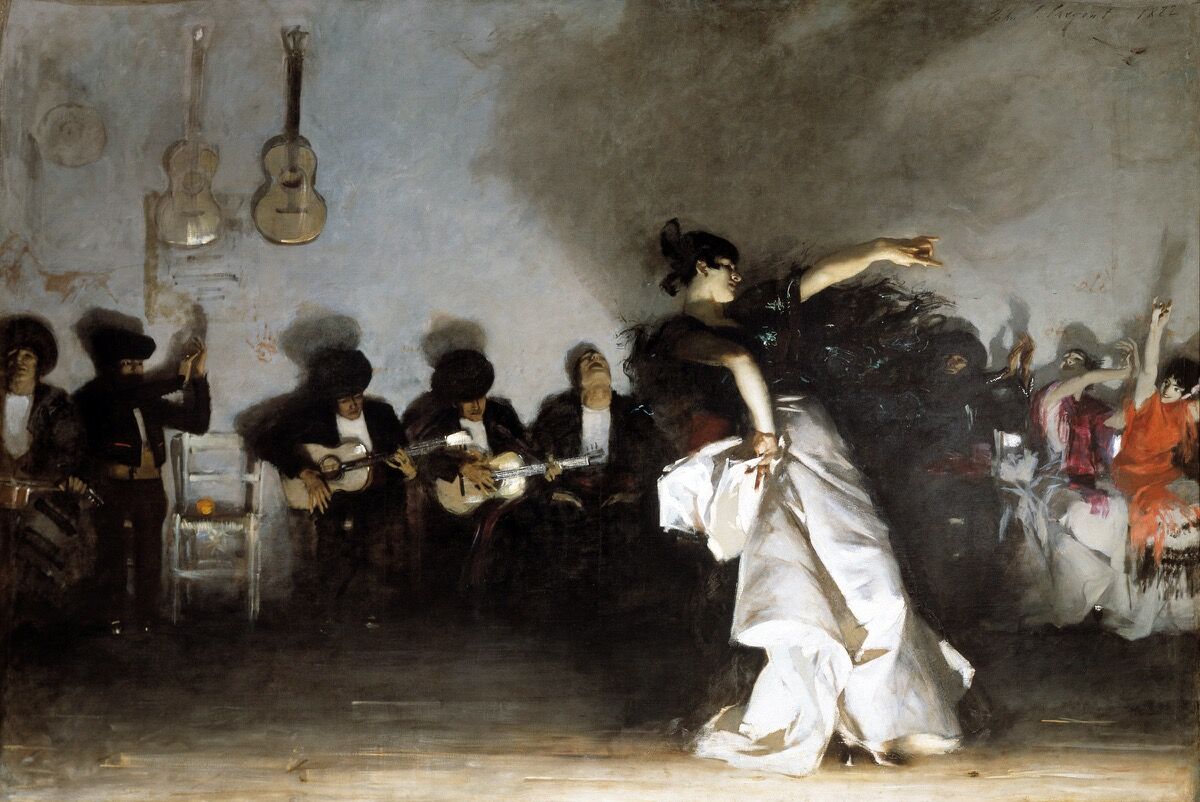 Isabella was a voracious collector, once describing her desire for new works as the “picture-habit…as bad as the morphine or whiskey one.” Her crowning glory was Titian’s Rape of Europa (1560–62), acquired in 1896 and once hailed by the Flemish artist
Peter Paul Rubens
as “the greatest painting in the world.” Of Europa’s arrival in Boston, she wrote to connoisseur Bernard Berenson: “I am drinking myself drunk with Europa and then sitting for hours…thinking and dreaming about her. Every inch of paint seems full of joy.” It was purchased with Berenson’s help for the then- world record price of $100,000.
Venice, and specifically the Palazzo Barbaro, had been Isabella’s favorite destination with her husband and artist friends. Thus, her museum was to be built in the style of the
Renaissance
palaces of Venice, complete with central open-air courtyard. In 1903, the museum (then known as Fenway Court) was completed. Isabella spent the following year installing the collection to her exact specifications—including certain personal touches that intertwine with, but never infringe upon, the art. Underneath Europa, for instance, is a swatch of light green silk cut from one of Isabella’s own gowns. 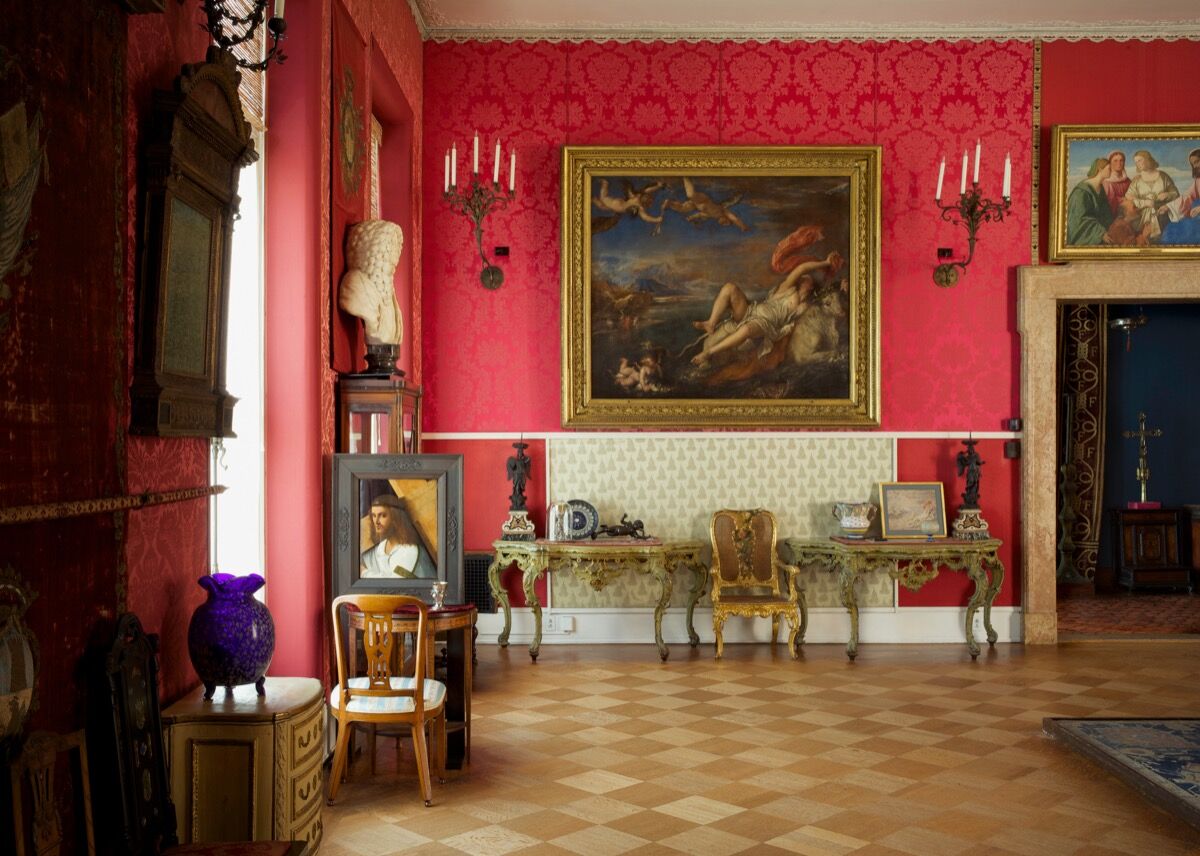 Installation view of Titian’s The Rape of Europa, 1560-1562, in the Titian Room. Photo by Sean Dungan. Courtesy of the Isabella Stewart Gardner Museum, Boston.

To ensure that her singular vision was upheld even after she was gone, Isabella outlined a series of rigid stipulations in her will. In the event of significant changes to the collection, the museum must be sold and the money donated to Harvard University. Now, more than a century after its founding, the Gardner Museum still serves as a portrait of this vibrant and irreverent woman.
As James wrote, presciently, in an 1880 letter to his longtime friend: “My dear Mrs. Gardner, if you ‘like being remembered,’ it is a satisfaction you must be in constant enjoyment of—so indelible is the image which you imprint on the consciousness of your fellow-men.”
Gabrielle Hick
Related Stories