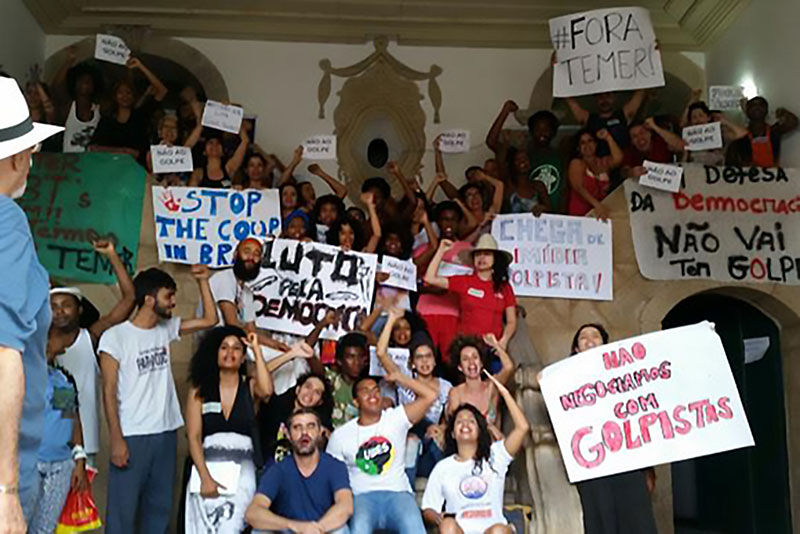 Following the removal of president Dilma Rousseff from office and subsequent political turmoil, Brazil and its new interim government dealt a symbolic blow to the artistic class last month by eliminating the Ministry of Culture. While the government backtracked on its decision less than two weeks after it was announced due to a massive outcry from the country’s cultural producers, significant damage had already been done.
Skeptical of the intentions of a newly appointed minister, Brazilian artists and cultural producers currently refuse to negotiate with what they consider an illegitimate administration. Thousands have occupied government buildings in protest, all across the country. The Palácio Gustavo Capanema, in Rio de Janeiro, one of the nation’s first modernist buildings, became the strongest cell of resistance. Luminaries of the art scene here, such as musician Caetano Veloso, even gave concerts at the site opposing the new regime.

The move to dismantle the Ministry of Culture, along with the elimination of other ministries responsible for a series of key public policy areas such as human rights, was one of the first changes announced by Michel Temer, the former vice-president who is now Brazil’s head of state. Rousseff may return to the presidency if acquitted in her final impeachment trial. However, Temer has begun to make a series of controversial adjustments during his short time at the helm of the country.
As the interim president and his new cabinet (composed entirely of middle-aged, white men) convened in Brasília for the first time two weeks ago, the message sent was clear: Brazil had ousted its first female president to welcome representatives of an old economic regime based on conservative values back into power. It marks a sharp right turn in Brazilian politics after years of left-leaning administrations, first with Luiz Inácio Lula da Silva and then Rousseff.
Temer argued for the dissolution of some of the country’s then 39 ministries to cut back on public spending. Brazil’s national debt currently stands near $1 trillion, or almost 70% of the country’s GDP, as a crisis continues to ripple through the once-booming economy. Temer also remarked that his new administration would have to strive to slim down the government’s financial burden because of fiscal decisions made while Rousseff was in office. These decisions are the official reason why she is being impeached and left a gaping hole of around $47 billion in the country’s budget. Though logical on the surface, calculations clearly demonstrate that the dissolution of the Ministry of Culture, which was to become a department of the Ministry of Education, would have amounted to insignificant savings.

Artists Outcry and the Government Backtracks

Aside from the fiscal inefficacy of the ministry’s dissolution, the decision quickly became a public relations disaster for the Temer administration. The nation remains somewhat divided between those who support the impeachment of the largely unpopular Rousseff and those who see the interim government’s maneuvers to take office as an outright coup d’état. However, artists and cultural agents are united in their vocal protests against the Ministry of Culture’s closure, and are using that decision as a pretext to condemn most of the new administration’s decisions.
A number of other controversial measures have begun to take shape under Temer, such as restricting universal public health services and changing retirement rules. And the move to neutralize the stronghold of cultural affairs within the seat of government further aggravated the feeling that Brazil is returning to a policy environment similar to that during the military dictatorship that ran the country from 1964 to 1985.  The Ministry of Culture itself was created in 1985 upon the country’s emergence from that brutal military regime. And as many commentators have noted, Temer’s logo for his new government features the same version of the Brazilian flag used at that time, one in which all of the country’s current states are not represented.

Trying to undo the negative impression left by his all-male cabinet, the sitting president reportedly made an exhaustive effort to place a woman as a secretary in what would have been a cultural department within the Ministry of Education. At least five women were consulted to head the department: talk show host Marília Gabriela, singer Daniela Mercury, and former state secretary for culture in Rio de Janeiro, Adriana Rattes, among them. And each of them all but refused Temer’s offer. He then settled for a man, Marcelo Calero. (Young and an advocate for gay rights, Calero seems an exception to the rule in Temer’s administration.)
As pressure from the protests mounted, Temer recreated the Ministry of Culture and promoted Calero from secretary to minister. So far, it’s been mainly more conservative and commercial sectors of culture that have acknowledged the new minister. Those include the Procure Saber movement, which maneuvered to ban unflattering biographies of some of the country’s music stars. Meanwhile, a large number of protesters refuse to leave government buildings until Temer’s entire administration steps down; administrative outposts are now occupied in all 26 states and the federal district of Brasília.

In rare interviews since taking office, Calero has pledged to use only legal measures (rather than force) to vacate these buildings now occupied all across the country. The minister has also said he will negotiate with cultural producers to reconcile their groups with interim presidency. This, however, will be no easy task. Instead of showing good will and implementing new measures, Calero will first have to deal with the heavy debt burdening his ministry, which owes about $300 million in overdue funds to public museums and other institutions.
He has also promised to protect and maintain the Rouanet law, a staple and anchor of the Brazilian art scene, which allows private companies to divert part of their tax payments to cultural projects. This is no trivial matter, as the payments enabled by the law are responsible for the financing of most films, exhibitions, plays, and publications produced in Brazil. A group of representatives in the lower house of Congress, however, has just proposed an investigation into the Rouanet projects, demonizing artists and claiming that the law is used to fund those who don’t like to work. (The attacks are reminiscent of Temer’s controversial motto as he assumed the presidency: “Don’t think about the crisis, work.”) It is worth noting, nonetheless, that cultural endeavors still account for less than 1% of the budget for all projects in the nation that receive any sort of government subsidy. So, like with the dissolution of the ministry itself, the proposal appears more ideological or populist in its motivations than a pragmatic effort to help right the Brazilian economy.
Silas Martí
Related Stories