In the Midst of Political Turmoil, the São Paulo Biennial Dreams of Simpler, Pre-Modern Times 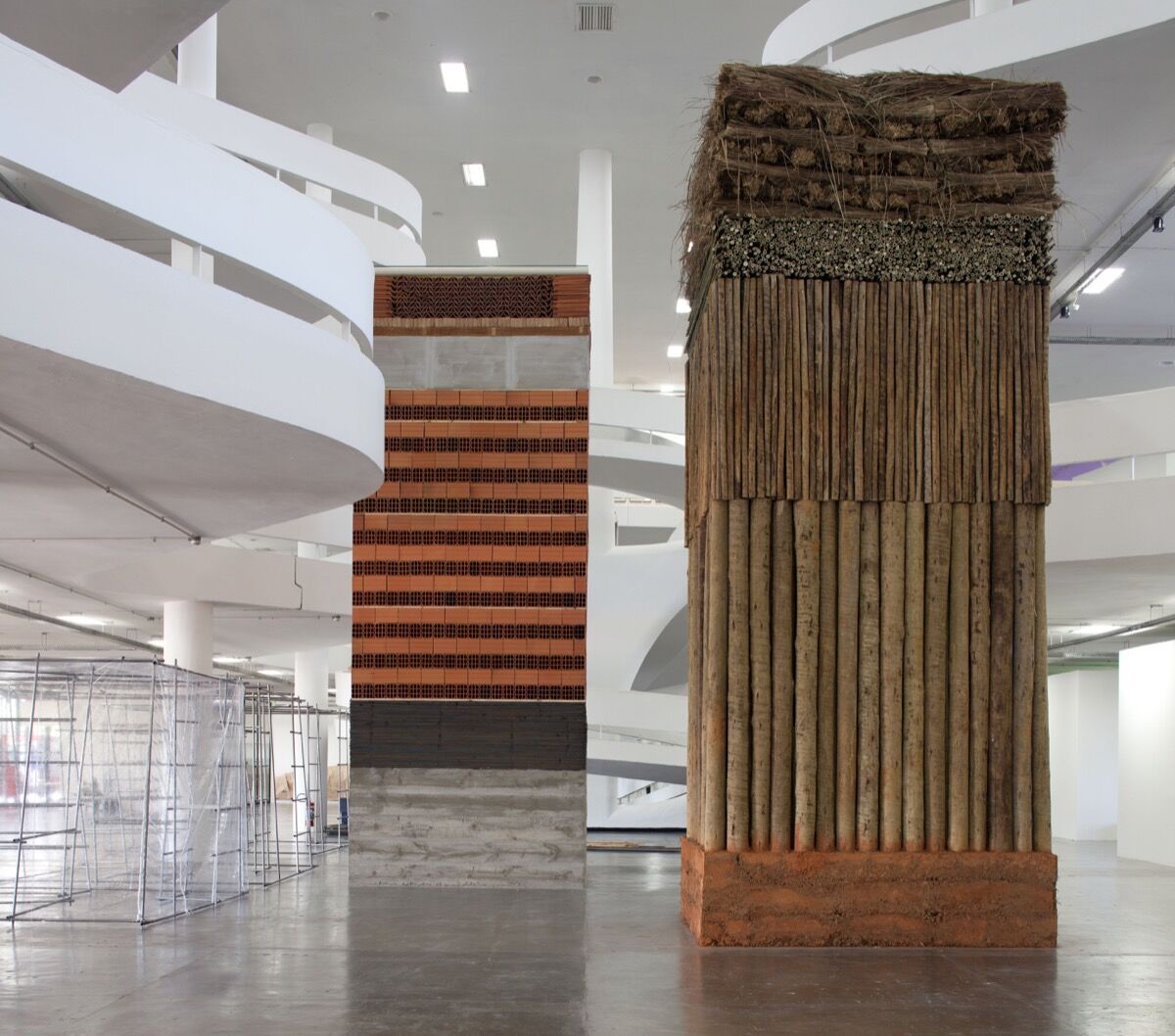 A pervasive sense of uncertainty has grown heavier in Brazil over the past few years. When Jochen Volz and his team of curators—Gabi Ngcobo, Júlia Rebouças, Lars Bang Larsen, and Sofía Olascoaga—announced the title of the 32nd iteration of the Bienal de São Paulo as “Live Uncertainty,” the biggest country in Latin America had already weathered an economic and political storm, with the public’s fury swelling as the day of the show’s premiere approached. Just 10 days before the doors opened here at the Oscar Niemeyer-designed pavilion in the heart of São Paulo’s Ibirapuera Park, the Brazilian president Dilma Rousseff was finally ousted from office and replaced with former vice president Michel Temer, the culmination of a months-long impeachment process.
Nearly half the country sees this as a coup d’état based on flimsy allegations against Rousseff. The other half celebrates the end of an administration that brought the economy to a halt, having fought for her removal no matter how dangerous a precedent this could set for Brazil’s young and rather fragile democracy. With protests raging in the streets outside, and reflections of that tumult inside the pavilion on the day the show opened for VIPs, “Live Uncertainty” manifests something of an ideological battle. Despite the exhibition’s esoteric, new age, sometimes outright hippie feel, no artwork in the show can escape a political reading. 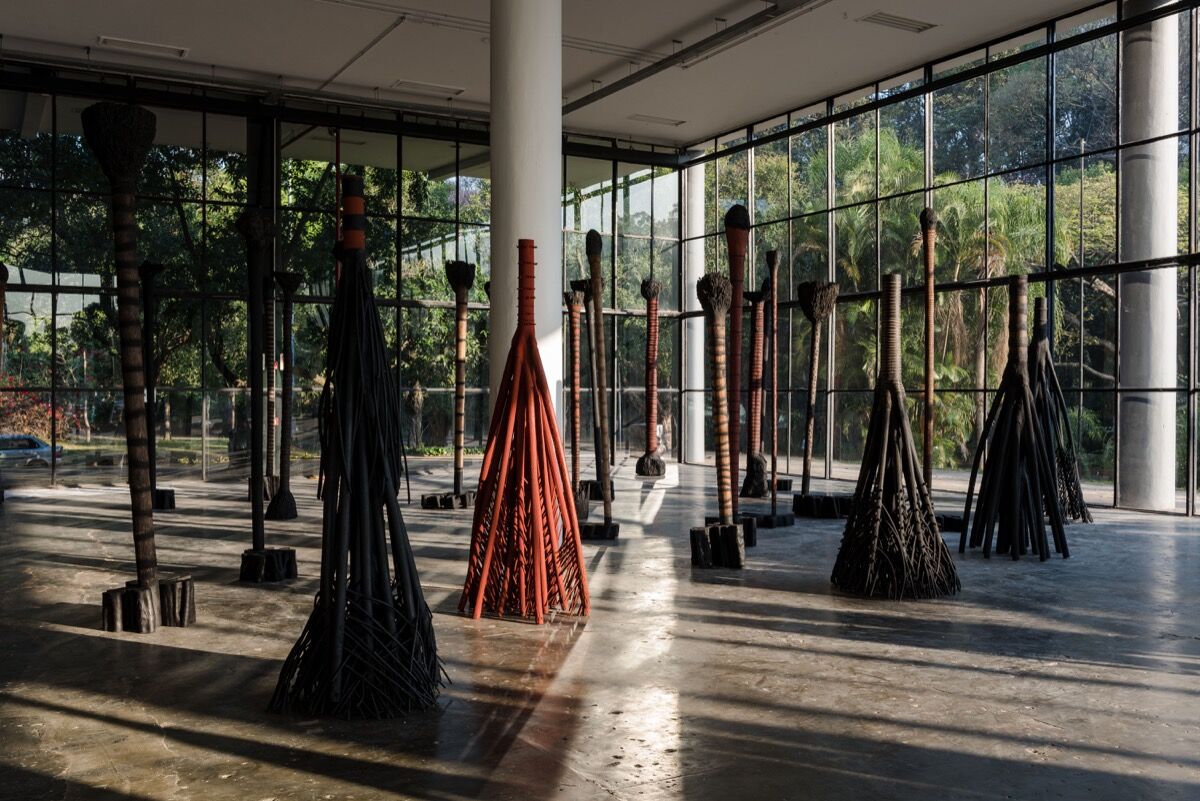 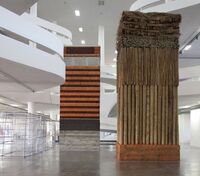 4 Images
View Slideshow
There are numerous pieces in the show that—composed of mud and dirt—relate to traditional methods of construction. Now, they suggest a nostalgic desire to walk barefoot in the grass and forget the storms brewing on the horizon. Entering the pavilion barely feels like a transition from the park outside. Visitors step into a literal forest of sculptures that
Frans Krajcberg
has created using dead trees. Nearby, a hut built by Bené Fonteles employs traditional indigenous techniques. Upstairs,
Rita Ponce de León
has installed a maze of dirt; Dineo Seshee Bopape has made square mounds using compacted earth; and
Lais Myrrha
, in the most monumental work in the show, has erected two huge towers, one made of concrete and steel, and the other a pile of straw, dirt, and wooden logs.
The biennial sets forth an environmental agenda of sorts, as though a detachment from the core values of a technology-driven, consumption-crazed society were the antidote to humanity’s excesses, which find a surrogate to Brazil’s political instability in the form of global warming and the havoc it threatens to wreak on the planet. This explains the rather instrumentalized use of footage from indigenous rituals, documented by artist collective Vídeo nas Aldeias. Leon Hirszman’s films featuring songs sung by workers in cocoa and sugarcane plantations add another layer to this romantic vision of indigenous and underprivileged populations as a source of inspiration in the fight against the evils of environmental destruction wrought by corporations.
The contrast that the biennial establishes—between the poetry-laden world of indigenous constructions and the brutality of modernism—sometimes comes across as a rather Manichean vision of the world, weakening the impact of the show. But it manages to rebound forcefully with its selection of artworks that rehash and revamp geometric abstraction, especially
Felipe Mujica
’s flags with triangular patterns and
Ana Mazzei
’s forest of delicate sculptures that look like lines materialized on a stage. Their thin wooden and metallic frames echo
Michael Linares
’s massive collection of wooden instruments,
Mariana Castillo Deball
’s bamboo carousel from which drawings hang, and the wiry contraptions made by Iza Tarasewicz and Sonia Andrade. 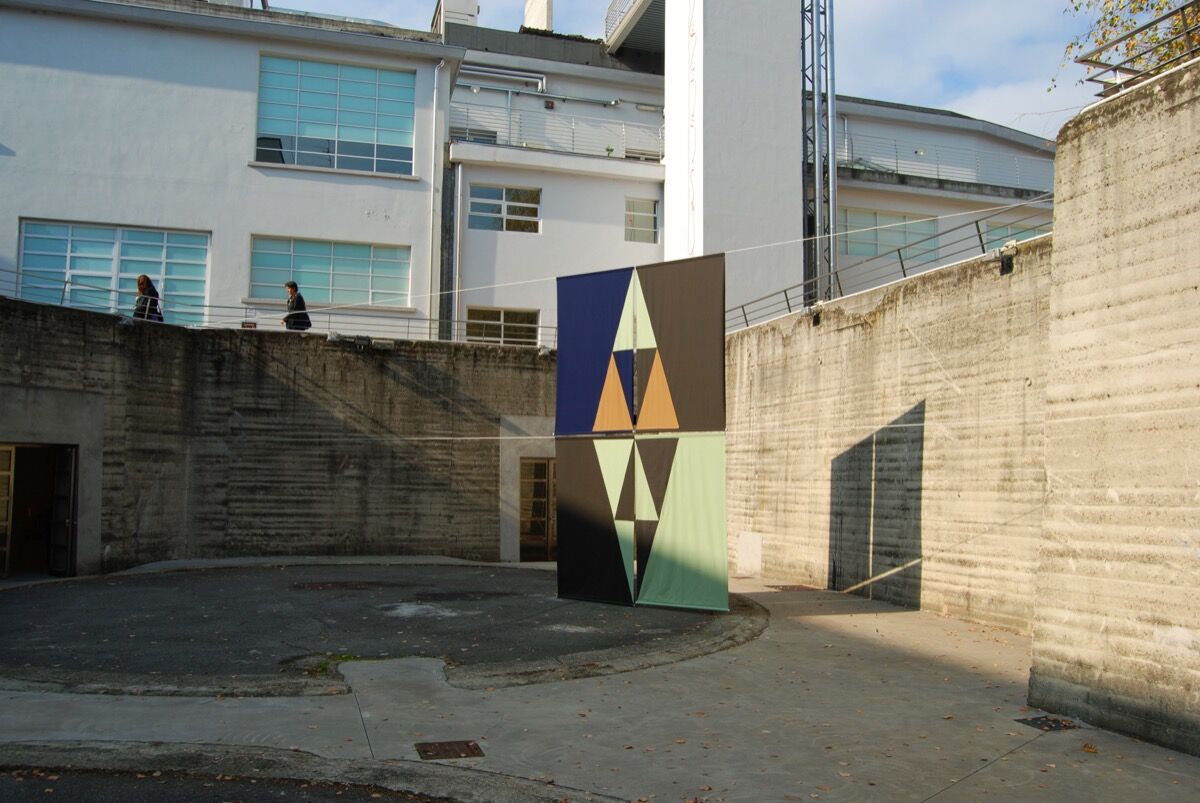 5 Images
View Slideshow
While geometric abstraction has a strong footing in the history of the Brazilian avant-garde, there is an edge to the works shown here, as though they were halfway between industrial austerity and organic unpredictability. Out on a limb, some slick works in the show make up the other end of the spectrum:
Francis Alÿs
’s mirrored walls displaying schematic paintings that suggest forces of nature at play; Michal Helfman’s film about a would-be humanitarian stream of contraband delivering bare essentials to a war-torn Syria;
Hito Steyerl
’s sterile installation about the overbearing power of robots coupled with pop music’s obsession with words like “hell,” “yeah,” “we,” “fuck,” and “die”; and the sleekest of them all,
Park McArthur
’s steel boxes filled with surgical gloves that are scattered around the pavilion near the entrance to every bathroom.
In a way, this dichotomy between humanity’s intimate relationship to the environment and the shimmering bells and whistles of high-end technology subvert the exhibition’s ambivalent position. Addressing a state of uncertainty requires more than a carefree, flowers-in-your-hair, sun-drenched delirium. It’s as dirty an affair as can be, and latex-covered hands delving into wet, spasmodic organs conjure up the B-side, or perhaps the true essence, of what at the surface may read as a hippie dream.
Loud and thunderous, Vivian Caccuri’s wall of speakers lined up in a semicircle around two innocent-looking candles delivers the booming message of these uncertain times. The sound system is designed to play only the lowest frequencies of each composition, constituting what she sees as an altar for bass. Once every hour, her work shakes and rattles the entire pavilion, like a volcano periodically surging to life. It feels deeply rooted in ancestral forces, while at the same time subject to the whims and fancies of ephemeral, manufactured pop anthems, a tension that lies beneath all the most powerful works in the show.
Silas Martí
Related Stories