What Happens If You Break an Artwork? 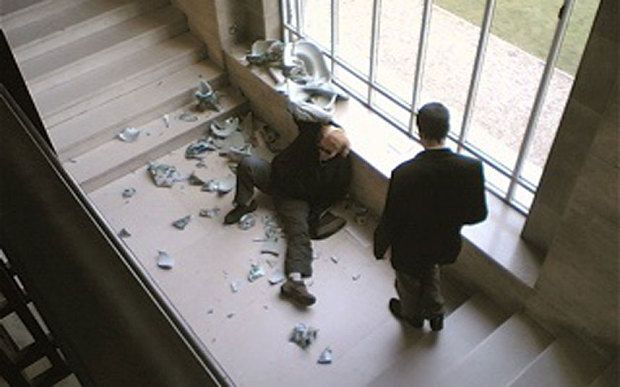 It’s the nightmare of many who set foot in an art museum: You trip, lose your balance, and fall right into a priceless work of art. Crash.
You don’t have to look far to find some haunting examples. In late February 2017, for instance, the art world took a certain joy at shaking its collective head when just two days into
Yayoi Kusama
’s major exhibition at the Hirshhorn, a selfie-snapping museum-goer broke a polka-dotted pumpkin in one of the artist’s famed “infinity rooms.”
Cautionary tales such as this have been covered in countless articles and immortalized in videos of surveillance footage, though it’s not often told what happens next—or what to do if this happens to you.
So what happens when you break a work of art? What would (or should) you do?

Writer Alison Kinney likes to put a version of this question to strangers at dinner parties. “It’s a moral test with new friends, to find out what they would do in this situation,” she told me, adding with a laugh, “and the right answer is: ‘I would run.’”
For Kinney, the question of what to do after breaking a work of art is more than a hypothetical. In spring 2014, while gallery-gazing in her native New York, she wanted to get a better view of some drawings.
Stepping back to contemplate the works from a distance, Kinney sat on what she thought was a bench. Her husband tried to warn her, telling her it was actually a work of art (made of styrofoam and chicken wire to look like a bench), but it was too late. By the time she realized her mistake, Kinney, who wrote about the experience for Hyperallergic in 2014, had broken off a corner of the piece.
Thinking back today, the emotions of the fateful moment are still fresh. “I felt terrified of being caught,” she said. Despite what she expects others to do in the same situation, Kinney didn’t run—not because she’s moral, she said, but because she was afraid. Still, she didn’t fess up right away either.
“What I did do, which I’m totally ashamed of, is I looked around the room as if somebody else had done it,” Kinney said. “Then I went into another room to look at some paintings. But I was just thrumming with anxiety and panic.”
Eventually, fear led her to confess to the accident to a gallery attendant, who thanked her for the honesty and then let her leave. But shortly after making an exit, another gallery staffer came and dragged her back “to face the judgement of their upper boss.”
She was asked to write down her name, address, and other identifying information. The work Kinney broke, by an anonymous artist, cost about $8,000. Regardless, it was money Kinney didn’t have. And though she could have lied to avoid potentially paying for the damages, she didn’t.

Kinney never heard from the gallery again. While she worried that her personal details might have been taken for the purposes of a debt collector, the reason was likely much more banal: insurance. After a work of art is damaged, a gallery or institution will fill out an incident report, which documents what exactly happened and who was involved.
In the vast majority of cases, a visitor like Kinney who breaks an artwork by mistake won’t be held accountable for paying for the repair or the value of the work. “Generally speaking, they’re invitees to the premises,” said Colin Quinn, director of claims at AXA Art Americas Corporation.
Museum- and gallery-goers are technically considered to be invited into those spaces, and assuming that the institution took reasonable measures to protect the piece in question, an insurance company will pick up the tab for any accidental damage to a work of art. The situation is of course different if a person intentionally damages a work of art, in which case they may need to pay for the work’s repairs or cover its value, in addition to facing criminal penalties.
Normally, though, after an incident report is filed, the insurance company will send a representative to inspect the work. They’ll evaluate it for damage and obtain a proposal for its repair from a conservator. Once the museum signs off on the proposal, “that, theoretically, should be the end of it,” Quinn said.
While breaking a work of art might be your nightmare, it really isn’t Quinn’s. “Of the things that keep me up at night, that’s not one of them,” he said. AXA insures work in some 4,000 museums and institutions internationally, 600 of which are in the Americas. Of the yearly claims it processes, work damaged or destroyed by visitors to institutions accounts for less than 10 percent.
“Those situations are very rare,” Quinn said. Professional museum guards, exhibition layouts that thoughtfully minimize the potential for accidental damage, and the use of stanchions or plexiglass to protect work all reduce the potential hazards to a work of art being shown in public. Generally speaking, museums know they’re inviting selfie-lovers into their halls and plan accordingly.
Quinn added that museums should take special precautions for children. The Shanghai Museum of Glass (which is surely asking for trouble) learned this the hard way last year, when two kids barreling through the gallery broke Shelly Xue’s sculpture Angel Is Waiting. Xue had spent 27 months creating the work, and had dedicated it to her newborn daughter. Following the destruction, she decided to rename the piece Broken.
In another case, a $1.5 million 350-year-old Baroque painting by Paolo Porpora took it on the chin from a 12-year-old. Security footage shows the young culprit—who is also holding a soda can—trip and put his fist right through the painting, at a museum in Taipei in 2015. Organizers said the hole in the canvas could be repaired and that the boy need not worry, the work was insured.
Are children a common cause for this type of destruction? “No comment,” Quinn said.

If after you break a work of art all you have to contend with is guilt, what happens to the work itself? Conservators often spring into action and rush the damaged piece to a back room. Carol Vogel wrote in the New York Times that listening to a conservator discuss how to repair the
Picasso
painting The Actor (1904–05) in 2010 was like “hearing an emergency-room doctor discuss the treatment of a patient who has been in a horrific car accident.”
In January 2010, a woman fell into The Actor while it was on view at the Metropolitan Museum of Art, ripping a six-inch hole in the canvas. The painting was quickly taken to the conservation studio, where conservators reckoned with the damage before covering the tear with weights for six weeks to keep the canvas flat. Then, a patch was applied, and the work was retouched with a pigment-and-synthetic resin that would resemble the paints used by Picasso. When it returned to the museum three months later, it was shown behind a sheet of plexiglass.
Even more complicated was a 2016 case, caused by a 91-year-old woman who filled out a crossword puzzle in a Nuremberg museum. The problem? That crossword was actually an €80,000 avant-garde artwork by Arthur Köpcke. The elderly museum-goer was no doubt confused by Reading-work-piece (1977), which included the phrase “insert words.” Police questioned her for half an hour after the incident became known; she said she was just following instructions.
The museum reportedly sued the woman, identified by police as Hannelore K, for insurance reasons, even though they knew she had no malicious intent. Firing back, a lawyer for the accused asserted that the museum had actually violated her copyright by restoring the work and erasing the words she had added.
Claiming that a work you damaged is actually now yours takes a lot of chutzpah. Kinney certainly never dreamed of doing something like that, and hopefully she’ll never be responsible for damaging a work of art ever again.
“I don’t go near anything now. And when I’m with friends who are seeing art with me, they won’t let me get near certain things,” she said. Since the incident, she’s had a newfound respect for the risks artists take by letting their work be shown to the public. “I try to think more about what it means to be an artist, making this terribly fragile work that you put into the public,” she said. “And then people just bonk into it.”
—Isaac Kaplan
Related Stories