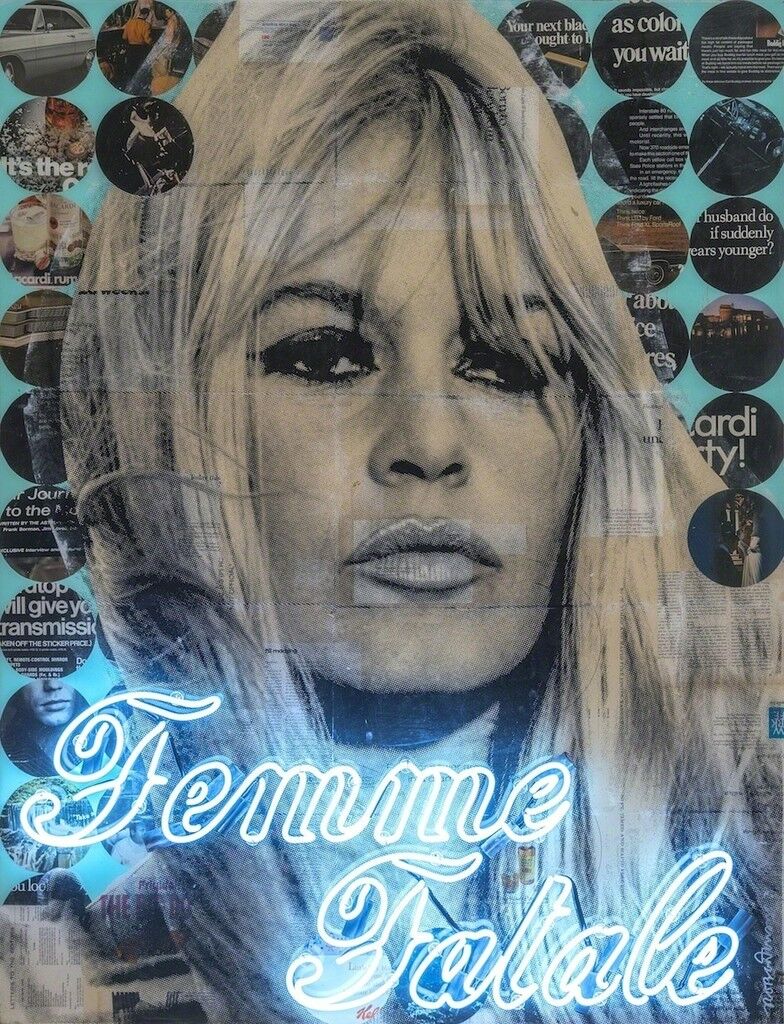 Robert Mars
Femme Fatale
Joanne Artman Gallery
Inspired by print ads, fashion magazines, movies, and tabloids, the works of
James Verbicky
and
Robert Mars
are filled with a retro sensibility—evident in their nostalgic subject matter and visual references to ’60s abstraction and
Pop
art. Their bright, graphic collages depicting film and rock and roll celebrities and vintage logos not only tap into the recent past, but also re-examine it in the digital age, where pop cultural imagery is edited and remixed with ease. Now at Laguna Beach’s Joanne Artman Gallery, they are presented together in “The Boys Are Back in Town”—appropriately titled after the Thin Lizzy song of the same name. 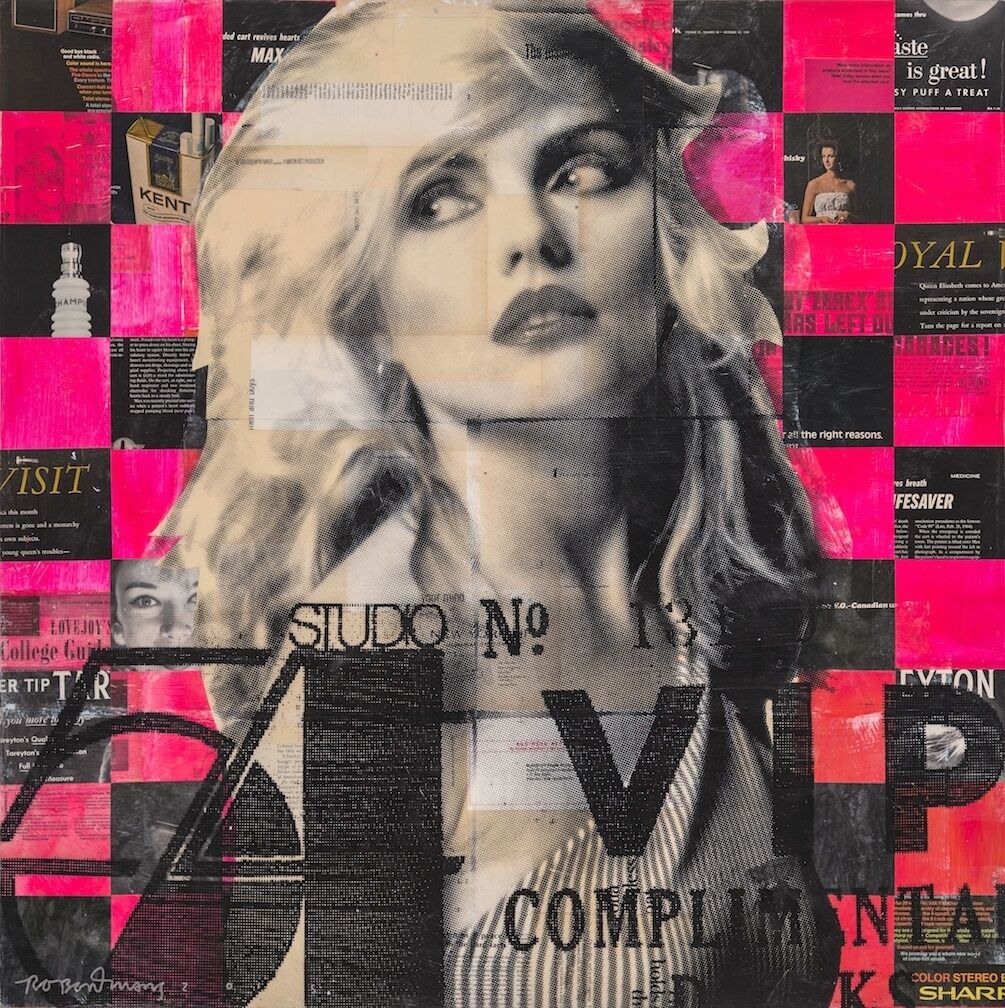 Robert Mars
Revives Hearts Blondie
Joanne Artman Gallery
In Mars’s Femme Fatale, actress and sex bomb Brigitte Bardot stares provocatively from the collaged surface. Printed in a black-and-white halftone, her likeness is surrounded by a pattern of circular, cropped print advertisements. A large blue neon sign, reading “Femme Fatale” in cursive script, is affixed to the surface, pointing to Bardot’s role as a symbol of erotic desire and consumer culture. Similarly, Revives Hearts Blondie sets Debbie Harry against a patchwork of hot pink and black squares built from collaged advertisements. A VIP drink ticket from the infamous Studio 54 disco, where Harry was a regular during the 1970s and ’80s, is silkscreened over the background to indicate the passage of time and shifting trends in music and club culture. Here, Mars both memorializes the past and also catalogues how we respond to it. 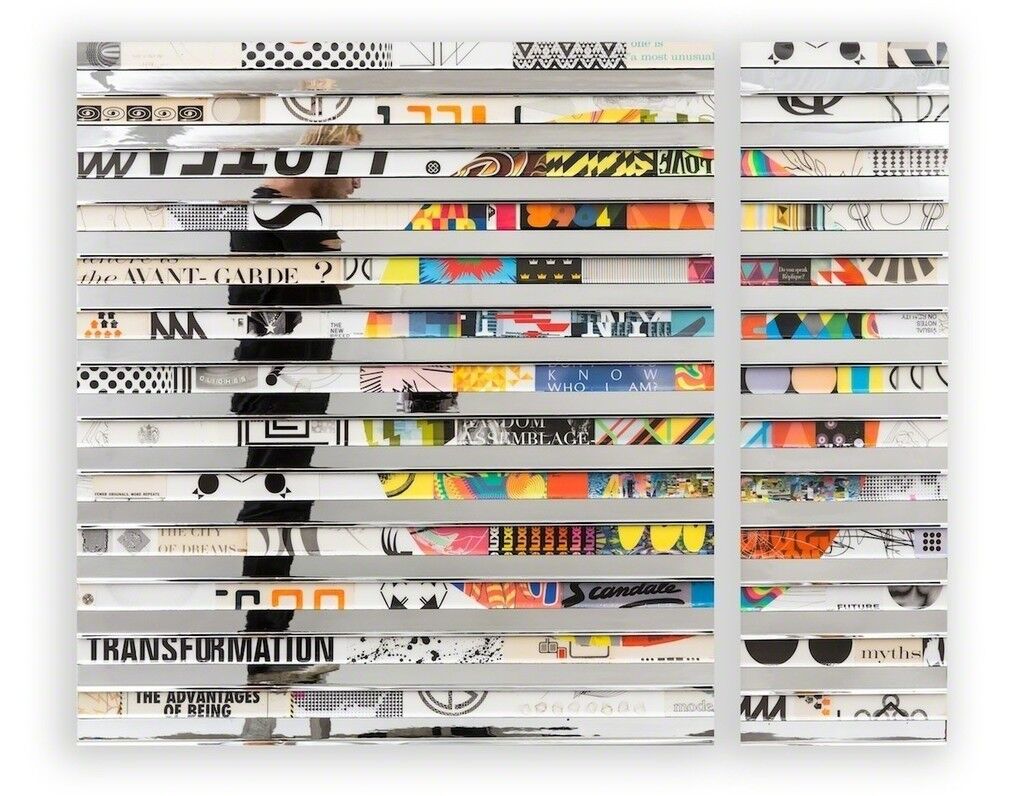 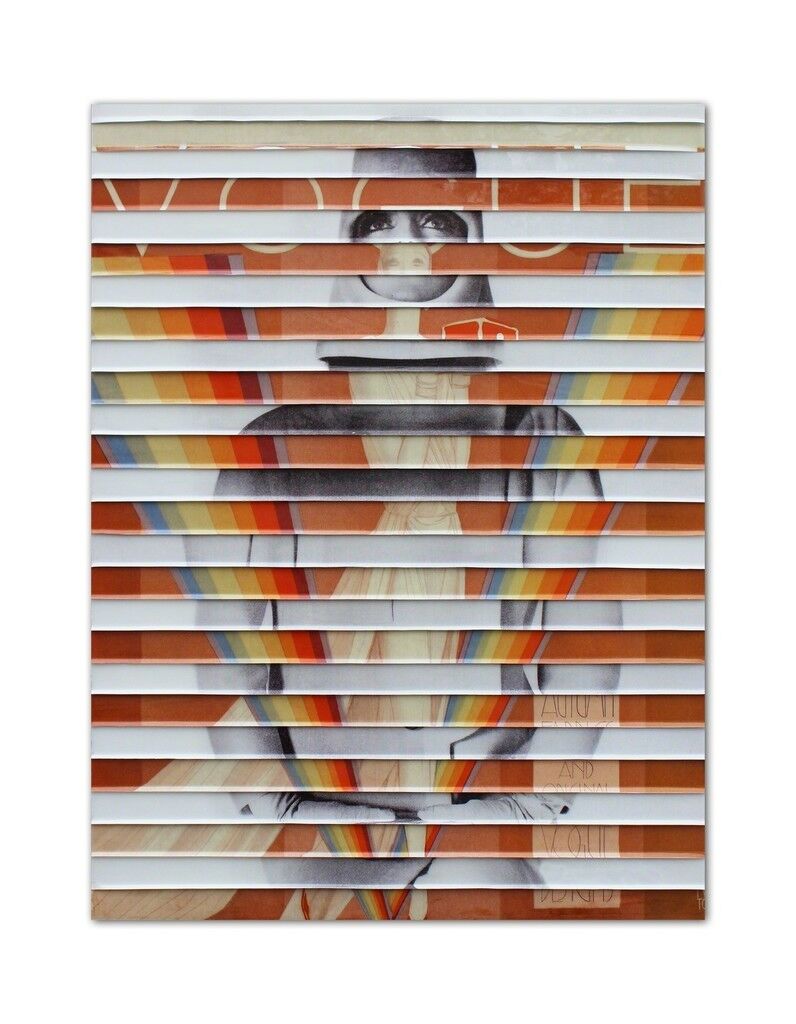 James Verbicky
Divisionaire 4, 2015
Joanne Artman Gallery
Advertisement
Verbicky uses thin strips of paper
appropriated
from vintage books and magazines—often dozens from various sources—in each of his collages, creating a rich tapestry of form, color, and text. “Print [...] is becoming a thing of the past,” says Verbicky. “I’m saving them [these books and magazines], sealing them in time.” In Divisionaire 4, Verbicky combines a photograph of a woman in a space-age get-up with an
Art Deco
cover of Vogue magazine. The strips from each image alternate, creating a hybrid that encourages comparisons between the two styles and subjects represented.  The images intercept then blend with each other as Verbicky explores how fashion changes and how it is rehashed years later.
In Force Bloom 21 and Citta Samtana Diptych 119, Verbicky uses a recurring circular motif that resembles a portal, target, or glowing orb. Here, circles represent the nucleus of the each composition, where Verbicky’s fusion of
geometric
abstraction and pattern with Pop figuration and text come into focus. Up close, his pictures present a mass of information, while farther away they resolve into simple, perceptible forms. Diffuse Diptych 2 works similarly, presenting a painterly form, not unlike hard-edge artists such as
Karlos Carcamo
. Both artists comb aesthetics from both the present and the past to cast off the limitations of style, school, and rules surrounding form.
—Stephen Dillon
“The Boys Are Back in Town” is on view at Joanne Artman, Laguna Beach, July 1–Sept. 30, 2015.
Discover more artists at Joanne Artman.
Related Stories