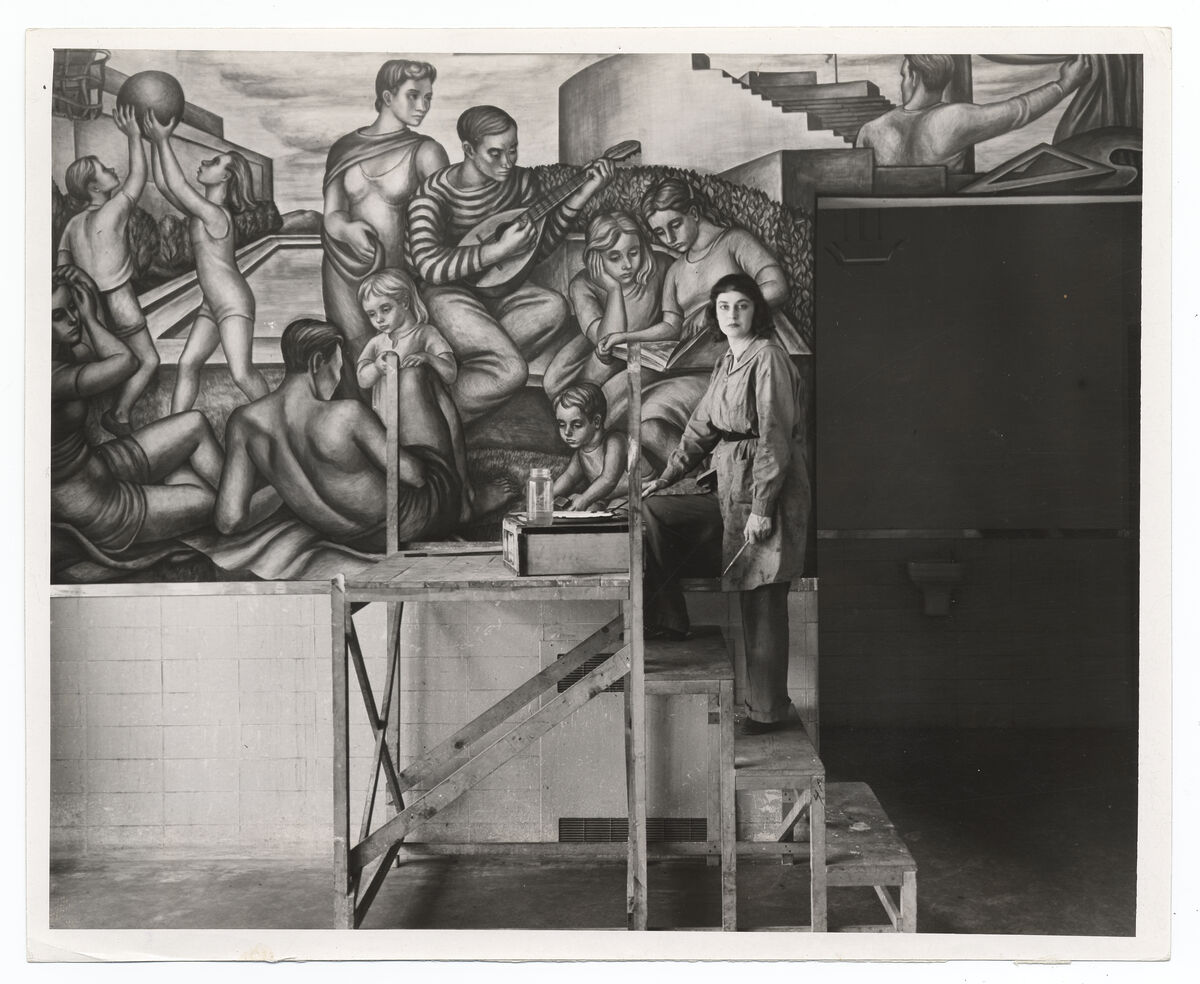 For decades, a 72-foot-wide fresco in Morelia, Mexico—located outside the Universidad Michoacana de San Nicolás de Hidalgo—teased students with its anonymity. With no explanatory plaque, the identity of the artist behind the mural’s colossal Tarascan Indian figures was left to local lore. Another mural at the nearby Museo Michoacano, however, made clear the conspicuously American name of its creator: Grace Greenwood.
The discrepancy irked Joanne Mulcahy, a writer currently preparing a biography of Grace’s sister, Brooklyn-born artist
Marion Greenwood
. Mulcahy thought it unjust to brand one sibling’s work while sentencing the other to obscurity. She successfully lobbied to install a plaque for Marion’s university mural, Landscape and Economy of Michoacán (1933–34), and the authorship of both Greenwoods is now clearly spelled out in Morelia.
The story of their adventurous three-year Mexican sojourn, on the other hand, is still largely unwritten. This is partially because the sisters don’t fall neatly into conventional categories of 1930s mural painting: New Deal projects, regionalist historical epics, or even Mexico’s “tres grandes”—
Diego Rivera
,
José Clemente Orozco
, and
David Alfaro Siqueiros
. 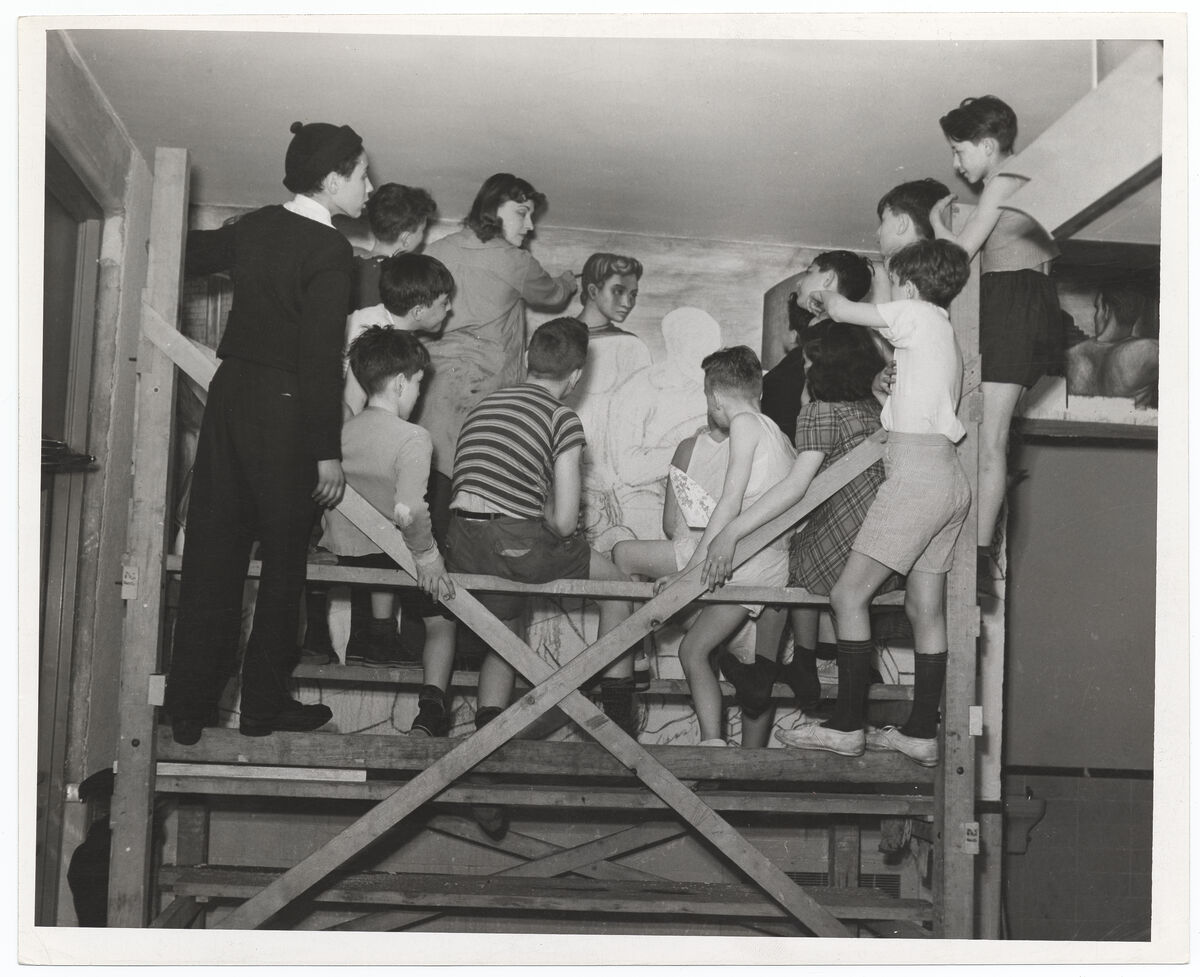 Shalat, Marion Greenwood with a group of children on scaffolding, 1940. Photographed for the WPA. Image via Wikimedia Commons.

But, in the sensationalized words of the Brooklyn Daily Eagle, “how Marion and Grace Greenwood, born and brought up in Brooklyn, reached the land of bullfights, hairless dogs and jumping beans is a story worth hearing.” The sisters painted five Mexican murals in true fresco technique between 1933 and 1936, becoming two of the few female artists who employed the medium. Although they worked independently at first, eventually the duo collaborated on a more than 3,000-square-foot section of the Abelardo L. Rodríguez Market in Mexico City—a project supervised by Rivera himself.
The sisters’ artistry was fostered by their liberal and encouraging upbringing. “They were from a sophisticated New York family, where the parents were supporting their bohemian tendencies,” said James Oles, a professor of Latin American art history at Wellesley College who has studied the Greenwoods. “It wasn’t a question of having a lot of money, but of being supported. I think that women who had that had a huge advantage.”
It was also ultimately advantageous to stick together. Though they spent most of their time in Mexico together, it was the younger Marion who paved the way for her sister to join her south-of-the-border mural projects. She first ventured to Mexico in December 1932, hitching a ride with two friends driving to Mexico City.
There she tracked down Pablo O’Higgins, an American expat and Rivera’s assistant, who taught her the rudimentary fresco technique of applying paint pigments to wet plaster. “Oil painting is a lazy medium but not fresco,” Marion said in a 1964 interview, referring to the physical stamina required to paint for hours on end before the plaster dried. “It was the true wet technique which
Michelangelo
had used and
Giotto
.” Shalat, Marion Greenwood on a scaffold, working on a mural above two sets of doors, 1940. Image via Wikimedia Commons.

Advertisement
With her newfound training, nonexistent Spanish, and considerable pluck, Marion soon convinced hotel owners in the colonial town of Taxco to let her paint her first mural in a 20-foot stairwell. Upon the project’s completion in April 1933, Marion wrote to her mother and proudly declared herself “the first woman who has ever done a fresco in Mexico.”
After proving to be a quick learner with her Taxco project, Marion was directly commissioned by Morelia’s university rector to paint her second (long-unlabeled) mural. It was around that time that Grace joined her sister in Mexico. With her sister’s help, she received a commission to paint a smaller, 26-foot fresco at the Museo Michoacano.
It is tempting to imagine some sibling rivalry between Marion and Grace, who essentially vied for the same artistic opportunities. But according to Mulcahy, when they worked together in Mexico, “they seemed to relish the camaraderie.” Their partnership reached its peak the following year, when the two collaborated on a government-commissioned project to paint walls surrounding a dramatic twin staircase in Mexico City’s Rodríguez Market. The Greenwoods were among 10 artists assigned blank walls in 1934, with Rivera supervising the visual content. 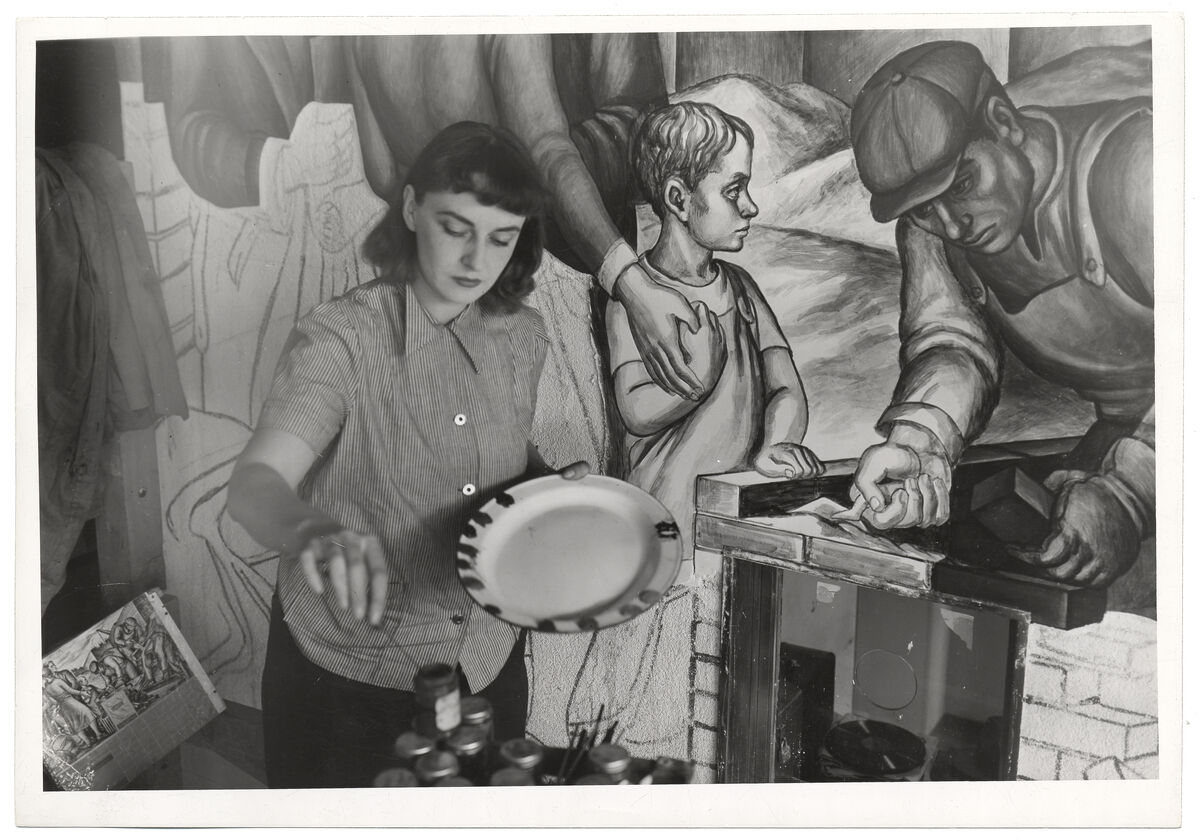 Shalat, Greenwood dipping her brush into her palette while painting a mural for the WPA Federal Art Project, 1940.

They chose to depict the struggles of the Mexican laborer. Marion’s walls, titled The Industrialization of the Countryside, began with the construction of ancient canals and progressed through working-class urban protests. Grace’s mural cycle, Mining, focused on the extraction, production, and use of mineral resources as a symbol for Mexico’s capitalism. The wall at the top of the staircases is where the two mural cycles meet. Depicting a city worker and farmer hanging a Communist banner together, Oles noted that these “two workers can be read as equivalents of the two young Americans, artists who had adopted the overalls and wages of the working-class to bring their message directly to the people.”
The project was received with great fanfare in the press, with articles about the sibling duo appearing in Moscow-based International Literature and the New York Times. In an April 1936 article in the Washington Post, Rivera named Marion and Grace “the greatest living women mural painters.” 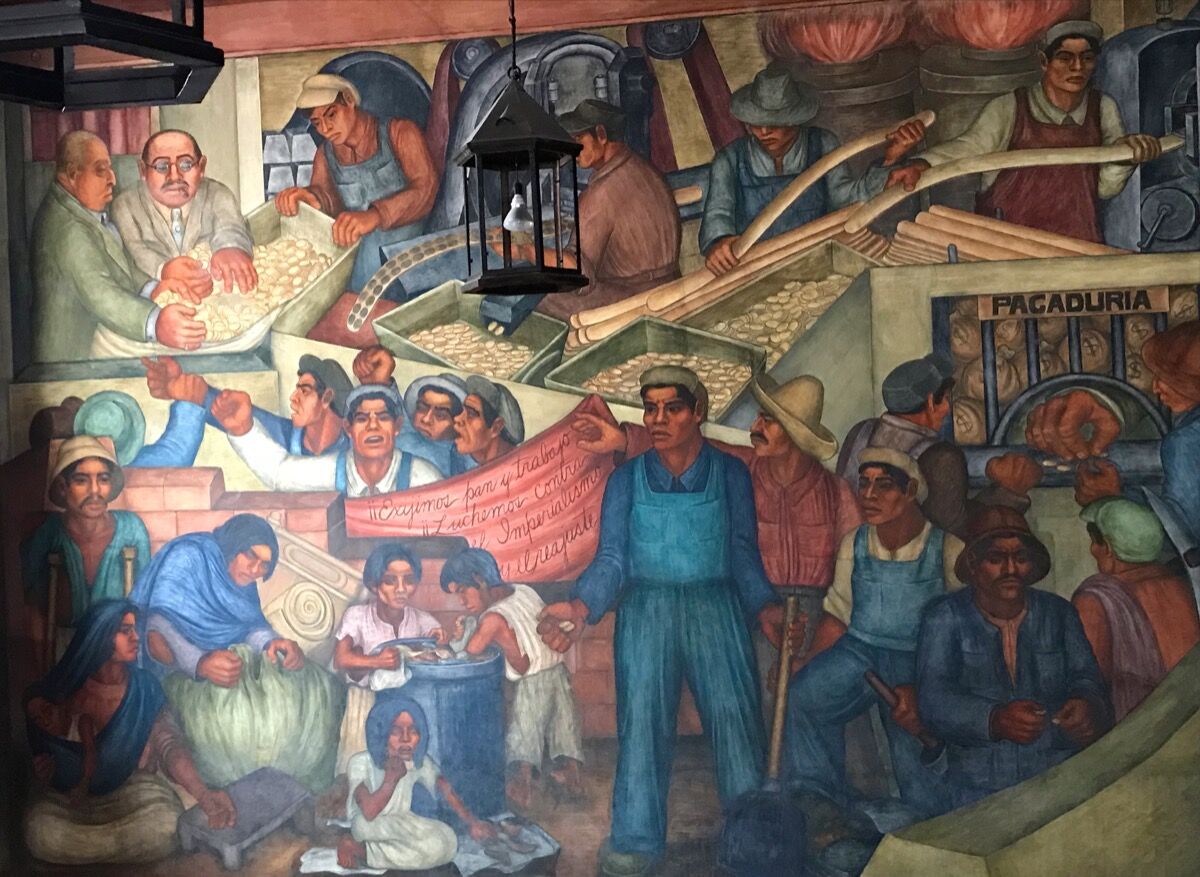 But with no future commissions, the Greenwoods returned home. “Heart and soul, they belong to America, to the Twentieth Century,” expounded the Brooklyn Daily Eagle. “Yet Mexico has been their godmother. She took them in when they were, practically, unknown; she will send them back, matured and crowned by success.” Soon after, they created oil-on-canvas murals for different sections of the Westfield housing project in Camden, New Jersey. After that, the sisters never worked together again.
Despite the fact that her Morelia mural was unidentified for years, it was Marion whose artistic legacy ultimately outshone that of her big sister, Grace. “[Marion] was just far more talented, far more bold, far sexier, far more interesting, probably more intellectual,” Oles said. “From what I can tell, nobody really remembered [Grace] too much in later years.”
Marion went on to become a World War II artist and war correspondent, and traveled and painted in China after the war; she made art for the rest of her life. But she would always remember her time in Mexico as an unparalleled moment of opportunity and creative freedom. Years later, she recalled, “I just never felt that way again.”
Karen Chernick
Related Stories

Meet the Man Saving L.A.’s Street Art One Mural at a Time

When the U.S. Government Paid the Working Class to Be Artists
Advertisement
Further reading in Art 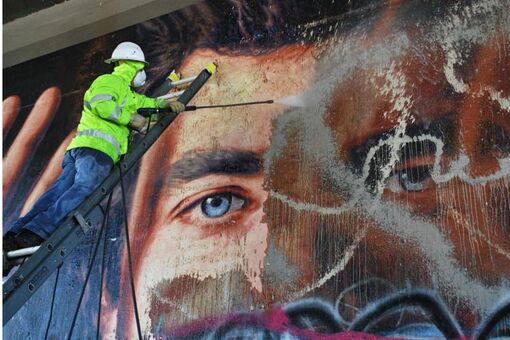 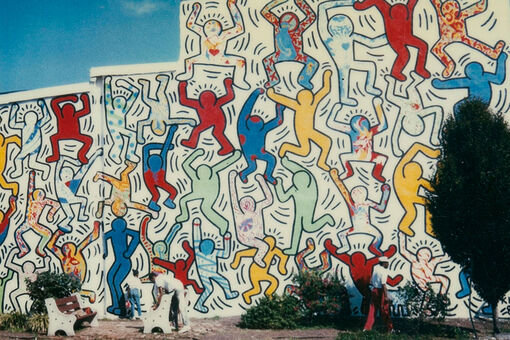 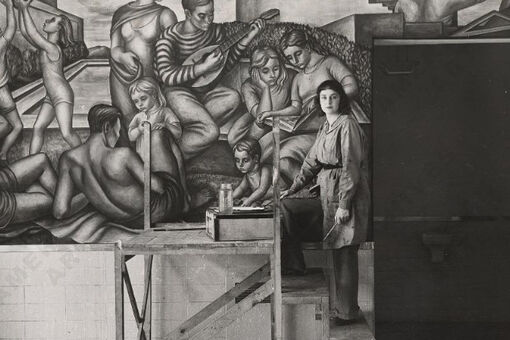