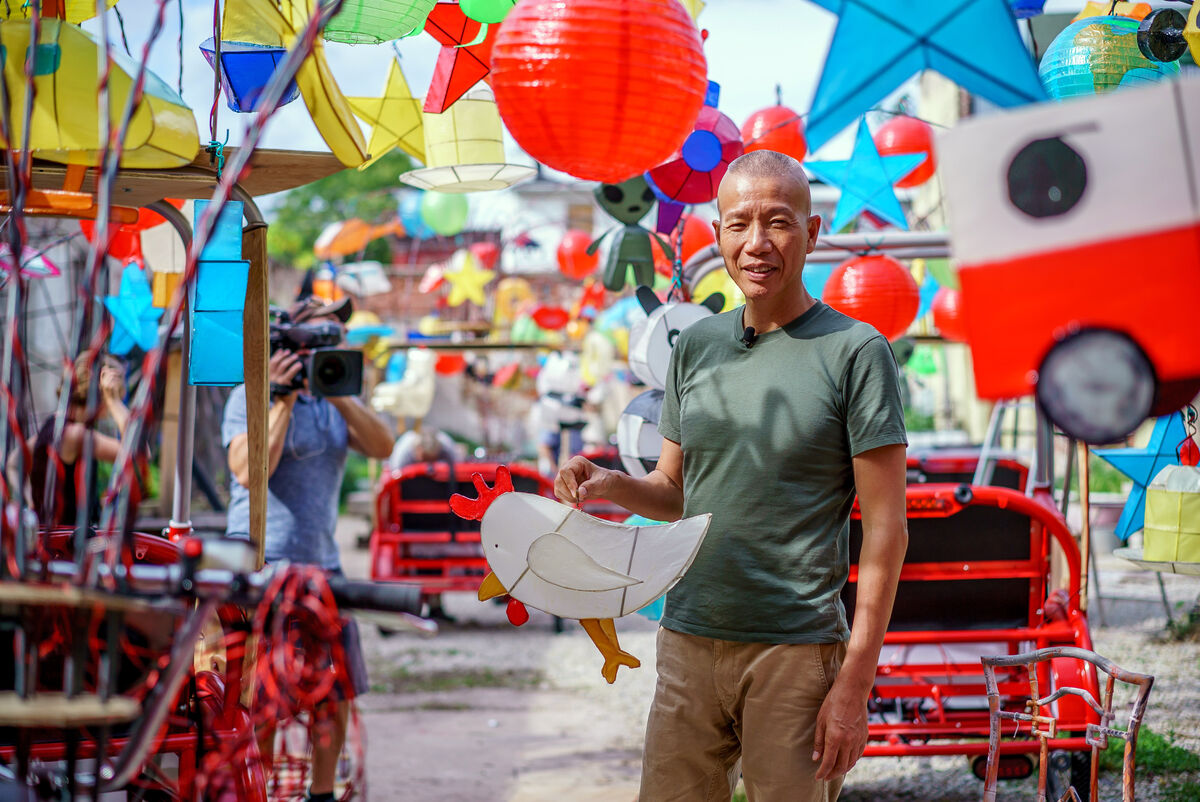 Portrait of Cai Guo-Quiang by Jeff Fusco Photography. Courtesy of the Association of Public Art.

“Go, go, go, go!” shouted
Cai Guo-Qiang
, with gleeful excitement, on a recent evening in Philadelphia. A fleet of pedicabs, festooned with a dazzling array of glowing lanterns designed by the artist, advanced down the street in a tight pack. The cyclists put their fanciful vehicles through a series of maneuvers, returning single file in a snaking line and then breaking into two threads that weaved in and out from each other.
“It’s really exciting to see them crisscross,” said Cai, watching them rehearse his choreography from the curb near the warehouse in North Philly where his studio team has been customizing the 27 pedicabs with almost 1,000 lanterns. “Your heart jumps.”
On September 14th, the internationally renowned Chinese artist will debut this public art project, titled Fireflies, on the Benjamin Franklin Parkway, the grand boulevard modeled on the Champs-Élysées running for a mile from the Philadelphia Museum of Art to City Hall. The pedicabs will show off their moves, like synchronized swimmers, in an evening performance open to the public near 22nd street.
It will be shot from above and projected via live feed on a large screen positioned at the head of the parkway below the museum. From the following night through October 8th, from 6 to 10 p.m. on Thursdays through Sundays, city dwellers and tourists can ride for free up and down the parkway in these pedicabs under their bobbling canopies of lights. 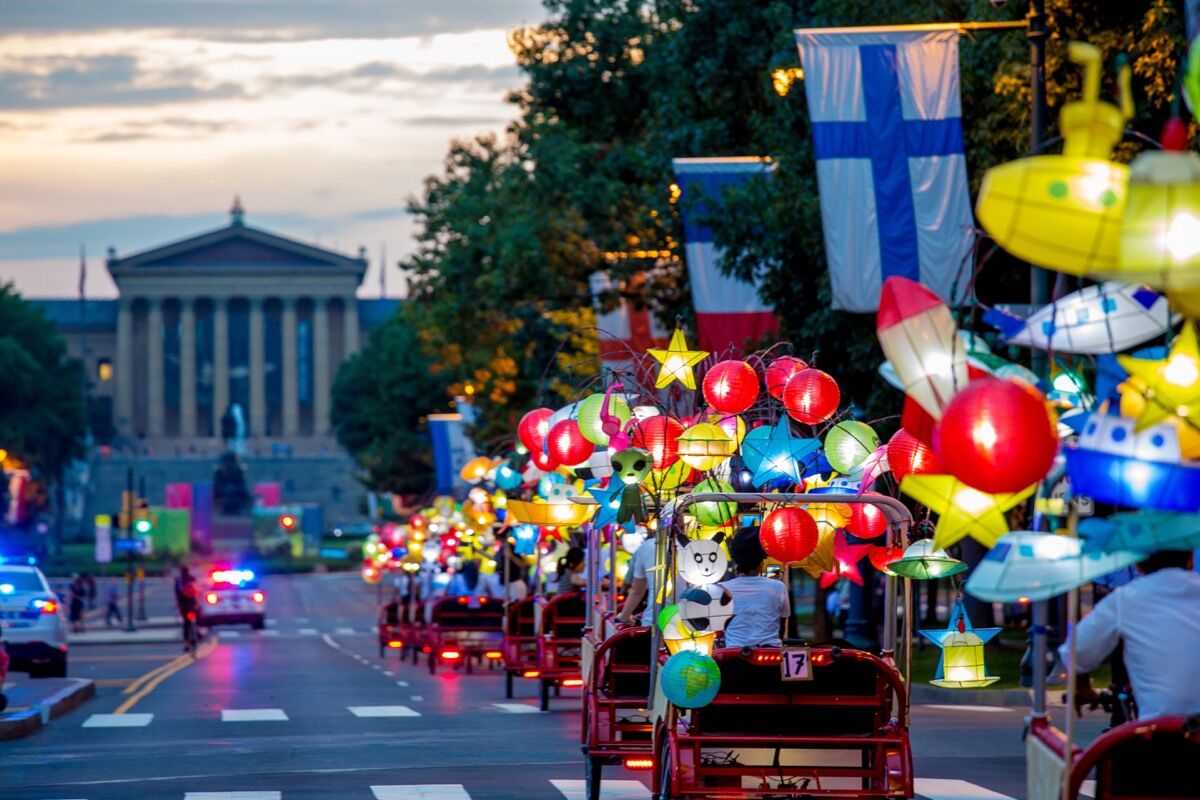 “Fireflies will give new life to our parkway at night and a sense of civic joy and happiness,” said Penny Balkin Bach, executive director and chief curator of the Association for Public Art, which commissioned the project in celebration of the centennial anniversary of the Benjamin Franklin Parkway. “It’s more necessary today, than ever, for us to create social situations for people to come together without judgment. It’s the embodying principle of this work.”
Known for his spectacular and surreal art events that paint the sky with pigmented gunpowder materials, in the form of fireworks and explosives (including Fallen Blossoms, which exploded in 2009 in front of the Philadelphia Museum of Art), Cai is here interested in shifting the role of the viewer from bystander to participant.
“What’s very moving to me on this parkway is the fact that it is lined with so many flags commemorating the importance of the immigrant history in Philadelphia,” said Cai, 59, a Chinese immigrant based in New York. He conceived of Fireflies before the election of Donald Trump brought the issue of immigration in this country to a crisis point, and he hopes that the project creates “an image with everybody, including immigrants, roaming about freely.” 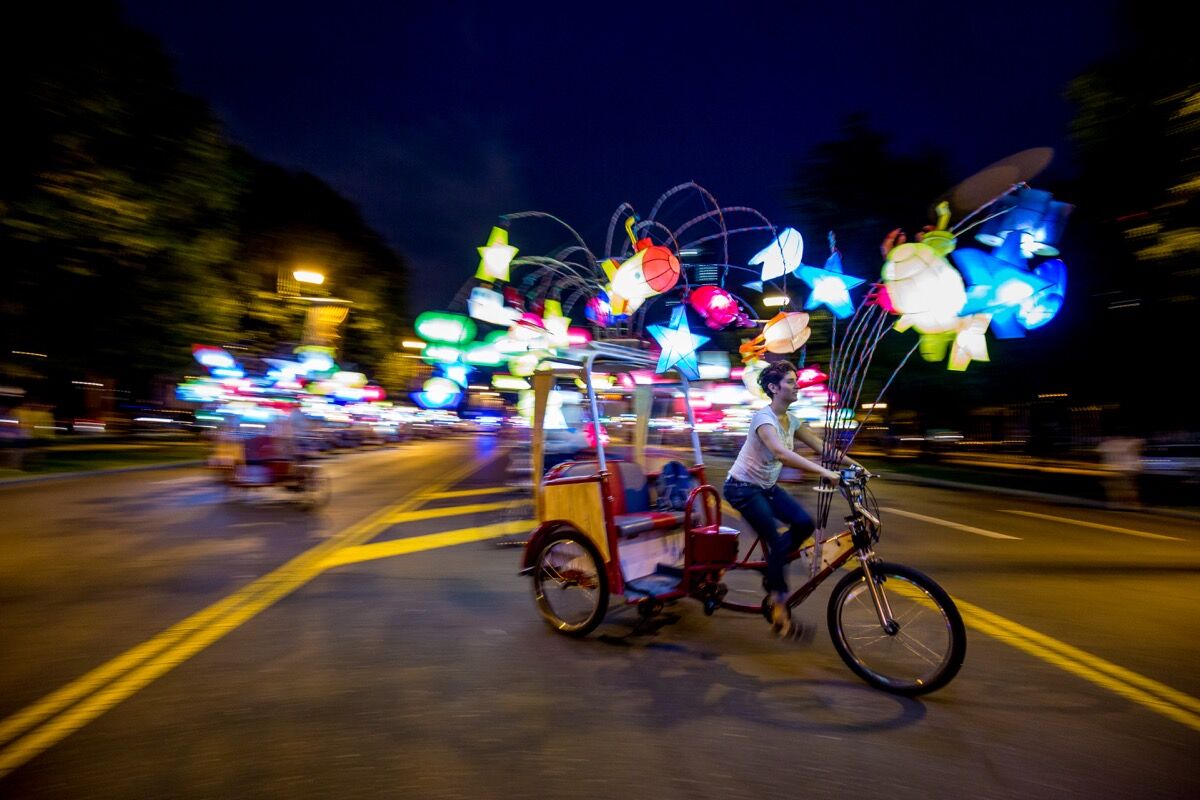 Advertisement
As with his explosions, which draw on his love of fireworks as a child in Quanzhou, China, Cai’s lanterns reference the ones of his youth that children carried at night during the traditional Lantern Festival, which takes place annually on the fifteenth day of the Chinese lunisolar calendar.
As Cai tells it, the festival’s origin story goes like this: 1,000 years ago, the God looked down in anger at the extravagances of the people of Quanzhou celebrating the new year and vowed to burn the city in punishment. After a warning from the God’s daughter, all the households of Quanzhou lit up red lanterns and fooled the God into believing the city was already on fire.
“The lanterns have a relationship with the city’s destiny,” said Cai. The artist is interested in how his lanterns could now foster communication and good will in the City of Brotherly Love, at a time of national unrest.
It’s hard not to feel delight at the sight of this brigade of colorful lanterns. Suspended on curved rods sprouting from the tops and sides of the pedicabs are a constellation of animated objects and characters— robots, grasshoppers, tigers, planets, submarines, ladybugs, rockets, high heels, watermelons, helicopters, pandas, ice cream cones.
Cai’s favorite is the wide-eyed extraterrestrial, which he calls an “avatar” of himself. He identifies strongly with the lanterns shaped as stars, airplanes, and roosters (his animal sign in the Chinese zodiac)—reminiscent of the ones he used as a child. The lanterns are composed of fabric with a resin coating, made by artisans in Quanzhou working from Cai’s designs, and are illuminated with battery-charged lights.
The artist likes working in multiples of nine, so he chose to make 27 pedicabs. Auspiciously, he discovered after naming the project that fireflies are Pennsylvania’s state insect, and Cai also feels an affinity with Benjamin Franklin, who the parkway commemorates. “He used a kite to see if it was possible to hit lightning,” he said of Franklin. “This is like an artist’s work.” This fall, Cai is also opening two major exhibitions. The first, on September 13th at the Pushkin State Museum of Fine Arts in Moscow, will celebrate the 100th anniversary of the Russian Revolution. “For me, this is particularly significant because I grew up in communist China with the education of socialist realism,” said Cai, who has made gunpowder paintings that explore the subjects of history, revolution, and utopian dreams. “This is an opportunity for me to think of this anew.”
On October 25th, Cai will debut new gunpowder paintings at the Prado Museum in Madrid, made in response to the museum’s Old Masters collection, including the mystical light found in
El Greco
’s paintings.
While Fireflies may seem a departure from Cai’s signature work using exploded gunpowder as a means of pigmenting canvas and sky, Bach sees them as connected by the element of chance. “As in his fireworks, there’s a point at which he’s not in control and Fireflies will have a life of its own,” she said.
Indeed Cai sees himself as responsible for only one part of the piece. He has set the performance work into motion through conception, planning, and rehearsal, but his diverse crew of cyclists out on the parkway will complete it.
As the pedicabs whirled past him at that rehearsal, Cai beamed. “I haven’t grown up,” he said. “The lanterns are like the fireworks of my childhood. It’s an explosion that can never be put out.”
Hilarie M. Sheets
Related Stories