Calder and Picasso Grandsons Curate a Tribute to Their Legendary Grandfathers 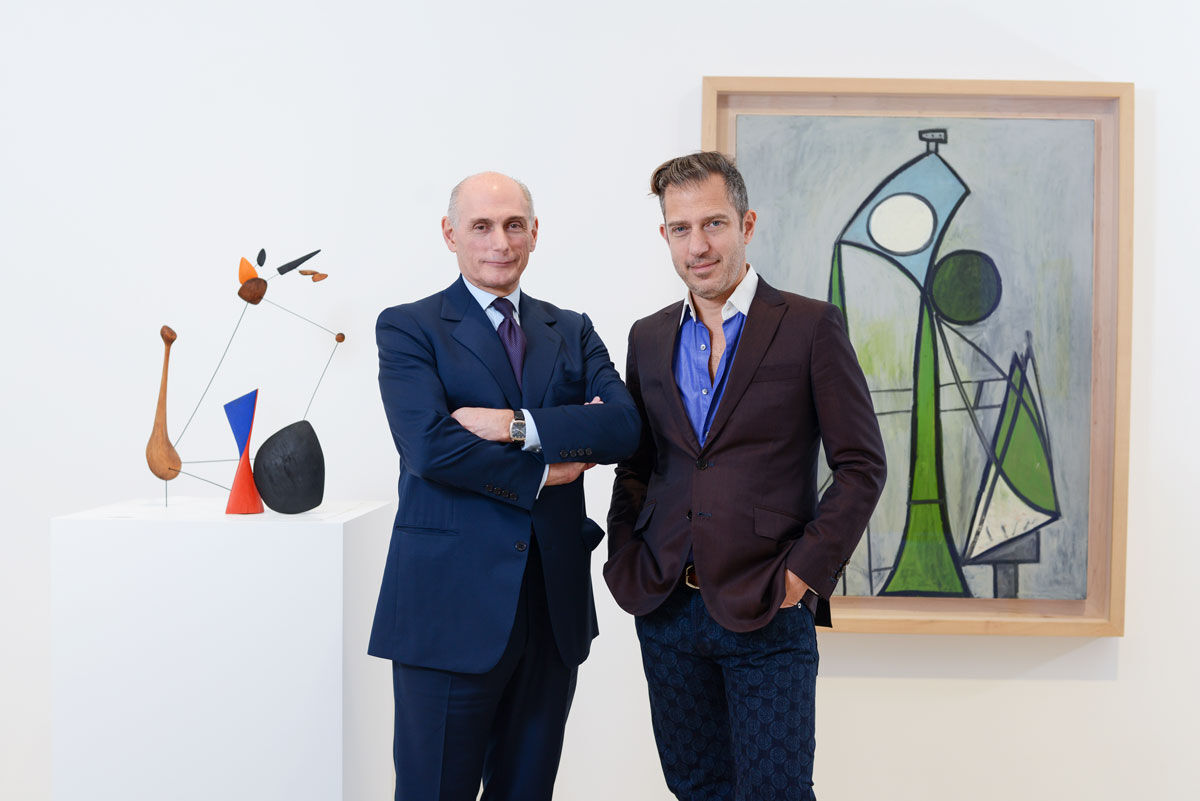 What happens when the grandsons of two of art history’s most illustrious artists end up in the same room?
When Alexander S. C. Rower, descended from
Alexander Calder
, and Bernard Ruiz-Picasso, scion of
Pablo Picasso
, first met some 30 years ago at a dinner party, they didn’t exactly get along. “Everyone was really nice, except him!” Rower remembered, glancing over at Ruiz-Picasso with a mischievous glint in his eye. “I thought, ‘Okay, I have nothing to say to you, you have nothing to say to me.’ Right, Bernard?” Ruiz-Picasso shot a sly, knowing smile right back.
The two men were standing together next to a sculpture and a painting made by their respective grandfathers. It was the morning before “Calder and Picasso,” an exhibition of the two modern masters, inaugurated Parisian art dealer Almine Rech’s New York gallery last Thursday (the Upper East Side space is helmed by Rech’s son, Paul de Froment). The first of its kind, the show was curated amicably by Rower and Ruiz-Picasso.
It’s not hard to imagine Rower’s story of his introduction to Ruiz-Picasso as a scene from a Zoolander-esque art world parody. But, in reality, the ice between the two men melted gradually over the years. And two years ago, when Rech (who is also Ruiz-Picasso’s wife) suggested that the two organize a Calder-Picasso show, an unlikely friendship began to blossom.
Like the work of their grandfathers—Calder is famous for buoyant,
kinetic
mobiles; Picasso for fractured
Cubist
paintings—Rower and Ruiz-Picasso couldn’t be more different at first glance. Rower is rambunctious, dresses colorfully, and speaks with the energetic panache of an actor. Ruiz-Picasso is measured, often decked in a sharply tailored suit, and soft-spoken. But get them talking about their grandfathers’ art, and their similarities (along with those of Calder and Picasso themselves) begin to shine through. 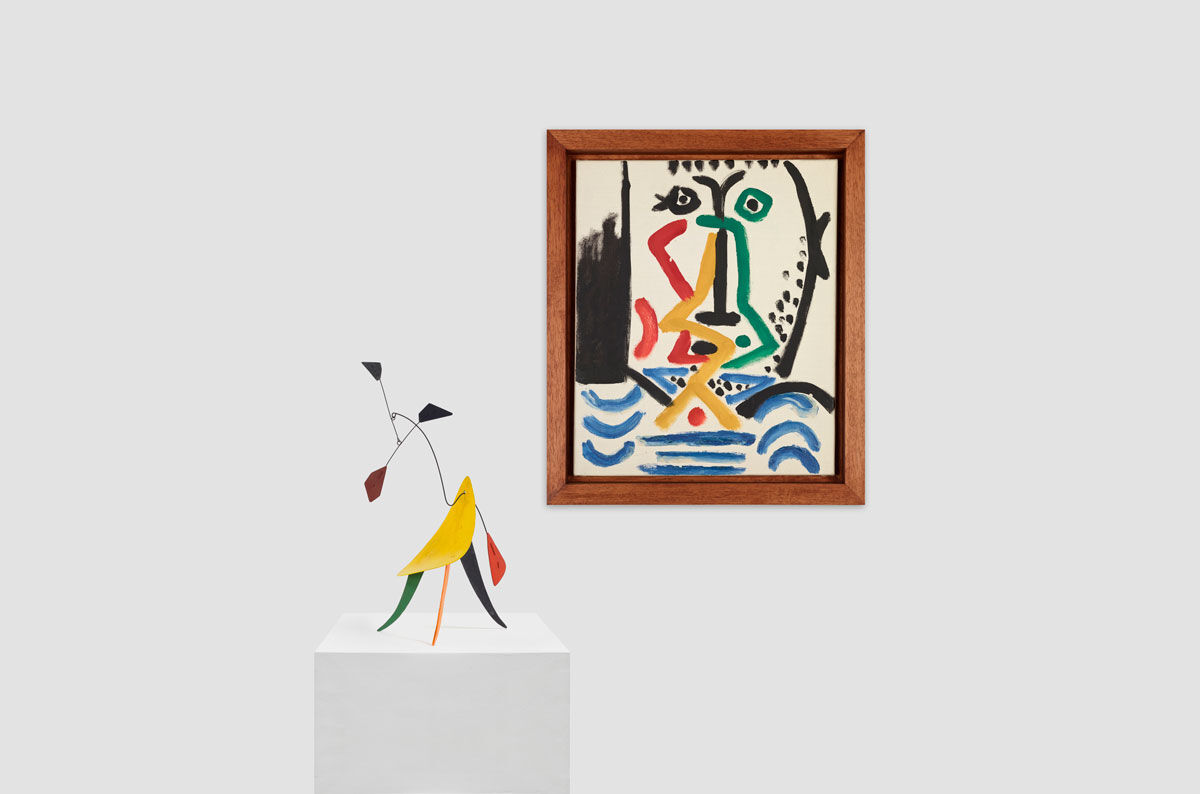 “Over the last two years, we discovered a lot of weird, unexpected resonances between both the two of us and our grandfathers’ practices,” Rower explained, glancing towards the pairing of artworks to his left. They are Picasso’s Portrait of a Bearded Man (1964), a pared-down self-portrait assembled from colorful lines, and Calder’s Untitled (c. 1942), a small kinetic sculpture serendipitously coated in the same palette as Picasso’s painting. They’re also the seeds from which the rest of the exhibition grew. As the story goes, Ruiz-Picasso sent an image of the painting to Rower, who replied with a shot of the sculpture. And so, a two-year collaboration commenced.
These two works make up one of several striking pairings across the show, where resemblances between Picasso’s and Calder’s use of color, line, and form are made abundantly clear. But for Rower and Ruiz-Picasso, these aesthetic parallels were but a jumping-off point for a deep dive into the conceptual underpinnings of their grandfathers’ practices. “Of course, there’s an obvious resonance here between the yellow and the green and this zigzag line,” Rower explained, gesturing towards the pieces. “But more importantly, it served as an opener to a much deeper dialogue about these artists.” Ruiz-Picasso finished the thought: “We didn’t want it to be easy, like choosing a jacket and shirt that go together when you wake up in the morning. That’s why this show took two years to organize. We went through a very slow process of studying and discovering; trying to pay attention to every aspect of our grandfathers’ creations.”
Rower and Ruiz-Picasso are uniquely positioned to study their grandfathers’ work with intensity and intimacy. Both now in their fifties, they’ve lived surrounded by Calders and Picassos—masterpieces and little-known experiments alike—since they were born. All of the pieces positioned across Rech’s New York gallery are owned by the artists’ families or their foundations; some have even sat in their foyers or hung on the walls of their bedrooms. It’s an overlap that’s made for fruitful conversation. “We grew up with these works, we live everyday with them, and we’re sharing that experience with each other,” explained Rower, glancing over at Ruiz-Picasso. In step, Ruiz-Picasso chimed in: “And through the comparison, we’re learning more about their respective practices—both the similarities and the differences.” 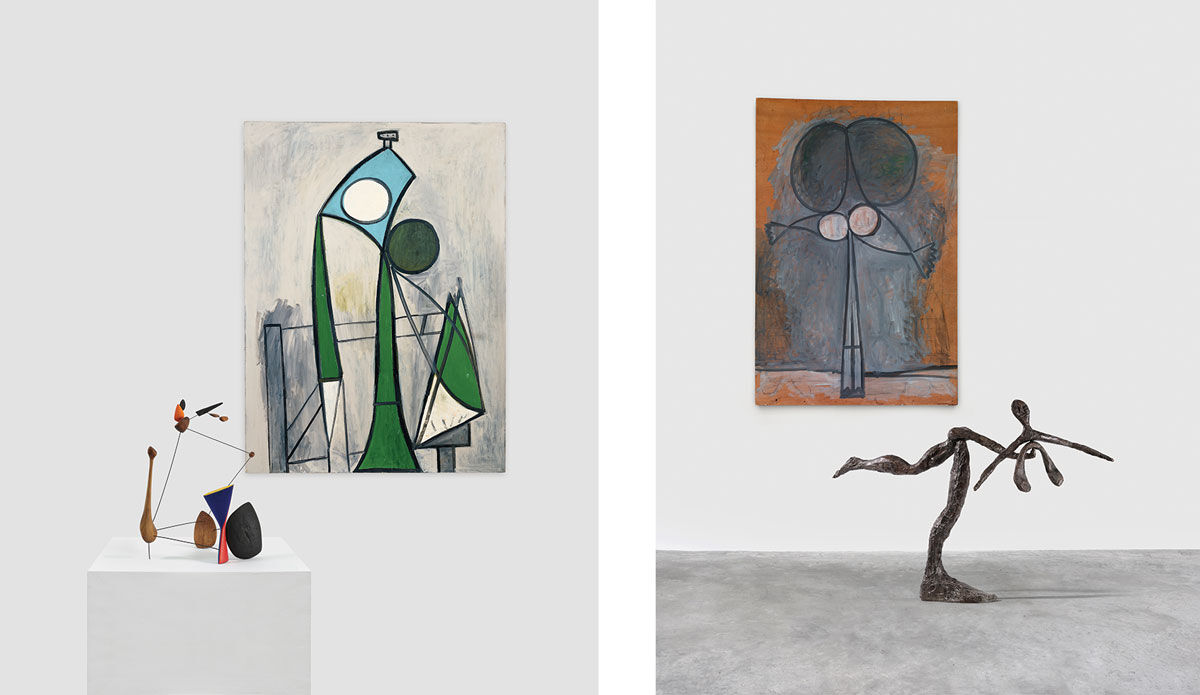 Advertisement
One corner of the show uncovers the striking resemblance between Picasso’s 1918 drawing Arlequin, a figure born from a single looping, energetic line, and Calder’s 1929 sculpture Acrobat, an airy but commanding figure constructed from just one wire. They reveal both artists’ interest in the radical paring down of the figure to its essentials, and in teasing dynamic motion from a single line. But it’s indeed the differences between their two approaches that reveal a more interesting story about each artist.
When Picasso made Arlequin, he was well into working in the Cubist style. The drawing reveals his exploration of fractured space and curiosity around the viewer’s role in piecing together a complete image from the limited visual information he provided. Calder, on the other hand, was just several years away from incorporating actual motion into his sculptures. Acrobat literally looks as if it’s poised to jump into the air and metamorphose into one of Calder’s later mobiles. Interestingly, the two artists didn’t meet until 1931 and had little contact thereafter.
“But the interconnections are infinite. Through talking with Sandy, I learned so much—not only about Calder, but about Picasso too,” Ruiz-Picasso mused, as he passed a bold, bright engraving of an abstracted jester by Picasso. One reporter stopped him in his tracks, asking him to discuss the piece. He dutifully explained Picasso’s relationship with prints, and how he used them as a platform for experimentation with layering and line. “But wait, I’m going to tell them what you’re not,” Rower interjected. “Picasso gave this to Bernard as a gift in 1963, when he was four. But when his family hung it on his bedroom wall, he was terrified of it; he had to leave the room. Is it such an important work? No. But for us, it opened up another similarity between Calder and Picasso: their combined use of fear and amusement.” Ruiz-Picasso, nodded in sheepish agreement, the knowing smile returning to his face. 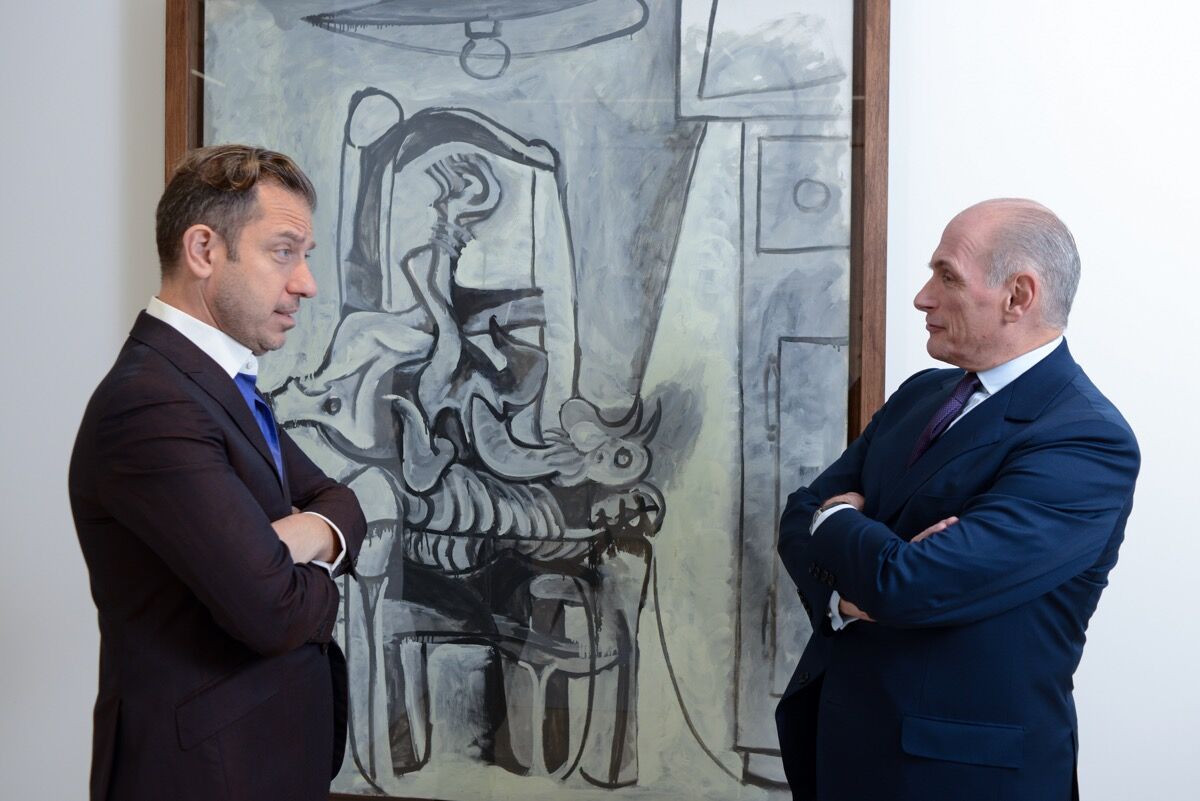 Rower walked over to a big, dense kinetic Calder sculpture, the size of crouching human, that sat on the floor not far from Picasso’s jester. “I grew up with this one,” Rower explained. “It was meant to be a 40-foot-tall public sculpture. Imagine those moving parts blowing in the wind over your head. Talk about terrifying.” While the two works might not make the cut for a blockbuster museum show, here, in this intimate context, they speak volumes about both artists. “Instead of focusing on the grandness of these two great masters, we were constantly evolving the exhibition to try to show something more intimate about them,” Rower explained, looking over at Ruiz-Picasso, who had stayed put next to his jester. Their efforts have certainly paid off.
Alexxa Gotthardt
“Calder and Picasso” is on view at Almine Rech, 39 East 78th Street, New York, Oct. 28–Dec. 17, 2016.
Related Stories