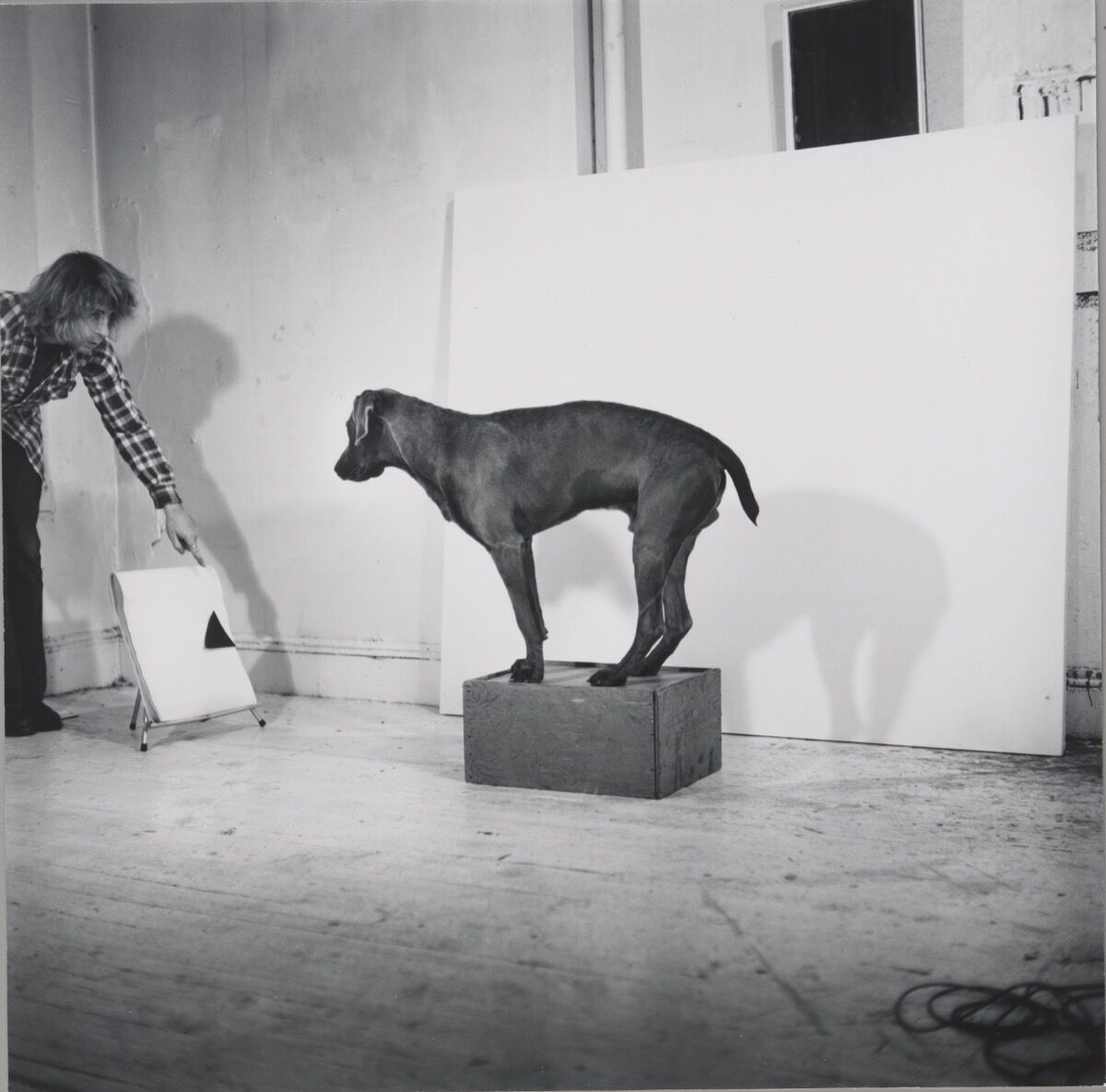 William Wegman, Before/On/After (detail), 1972. © William Wegman. Courtesy of the artist and The Metropolitan Museum of Art. 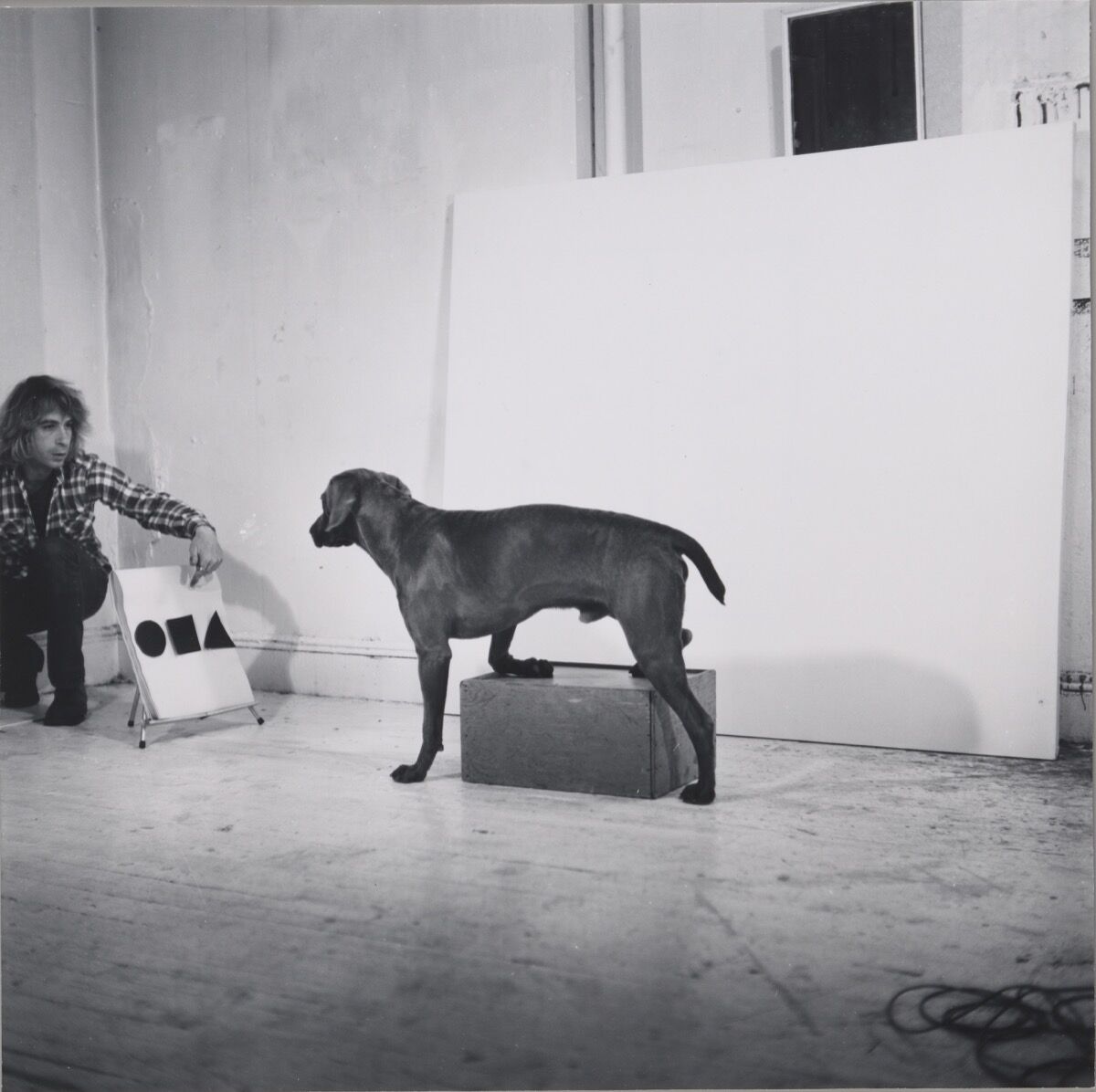 William Wegman, Before/On/After (detail), 1972. © William Wegman. Courtesy of the artist and The Metropolitan Museum of Art.

Once, a long time ago (but in a cultural climate that bears some striking similarities to our own), the American art world looked askance at California. This isn’t to say the Golden State had no art scene. Indeed, in the years succeeding World War II it bore witness to a steady stream of cultural innovators and iconoclasts: from San Francisco’s beat mecca King Ubu Gallery,
Bay Area Figuration
and “
Light and Space
” in Los Angeles, to the “
CalArts
Mafia” phenomenon highlighted in a newly opened exhibition at the Metropolitan Museum of Art.
“Before/On/After: William Wegman and California Conceptualism” was occasioned by a gift by the artist and his wife, publisher Christine Burgin. The two have bestowed his entire video catalog from 1970 through 1999 to the museum. (This doesn’t include
Wegman
’s commercial commissions for Sesame Street, Saturday Night Live, and other mainstream outlets. Although if for some reason you haven’t streamed Dog Baseball yet, do). Wegman’s oeuvre is often presented as a bifurcated curiosity: Art historians cite the 1970s experimental videos as auteurish gems, while pop culture latched upon his proto-Anne Geddes commercial portraits of his Weimaraner dogs. Outside of media-studies classrooms he continues to be best-known for the latter work.
Yet while foregrounding Wegman’s videos, “Before/On/After,” curated by Douglas Eklund, seeks to place them in a continuum. The reels, which play continuously in a small screening room in the middle of a long, narrow gallery, are bookended by works on paper and artist books by Wegman and others, drawn from the museum’s permanent collection—a curatorial decision that lends critical and contextual dimension to these timelessly charming videos. 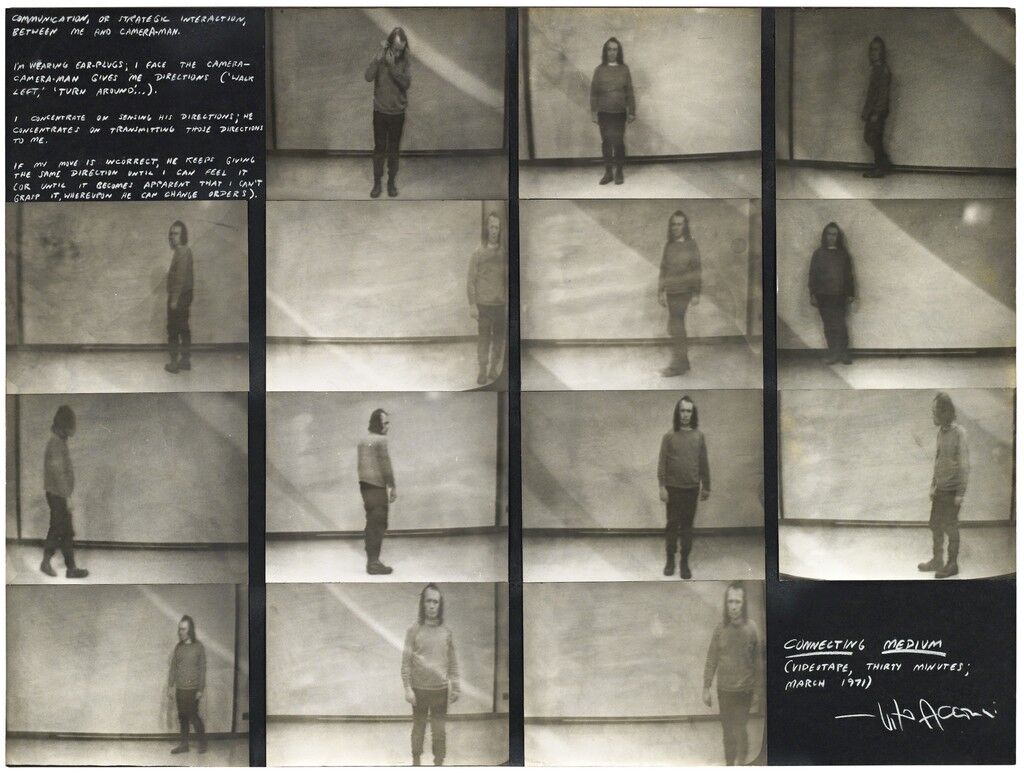 Vito Acconci
Connecting Medium, 1971
Galleria Fumagalli
What exactly was this ’70s West Coast movement reacting against? In 1968, “important” American art, as represented by
Conceptual
artists like
Lawrence Weiner
and
Vito Acconci
, remained entrenched in New York. As Eklund would observe of that time in the catalog accompanying his 2009 Met show “The Pictures Generation: 1974–1984,” the “bleary-eyed visages on the cover of Avalanche magazine revealed them to be something like rock stars in the very small, insular world of no more than ten New York galleries and another ten in Europe that featured their brand of advanced art.”
Meanwhile, on the other side of the country, representatives for the estates of educator Nelbert Chouinard and Walt Disney (who had harbored a lifetime gratitude to Chouinard for training his first animation crew on spec) were finalizing the merger of the financially struggling Chouinard Art Institute and the Los Angeles Conservatory of Music. In 1970 they would open California Institute of the Arts (CalArts), having tapped
John Baldessari
and a number of other East-Coast-based artists and educators.
Nearly a decade since Eklund’s watershed “Pictures” retrospective, this show reexamines the output of artists working within the L.A. area during the first years of Baldessari’s now-infamous tenure at CalArts (many of whom would later find critical success in “Pictures”). Several of the artists in this survey (although notably not Wegman, who came to L.A. after a teaching stint in the Midwest) participated in Baldessari’s “Post Studio” workshop, wherein they jointly hit upon an entirely new approach to Conceptual art—one that would seep into and quickly suffuse L.A.’s artistic bloodstream. 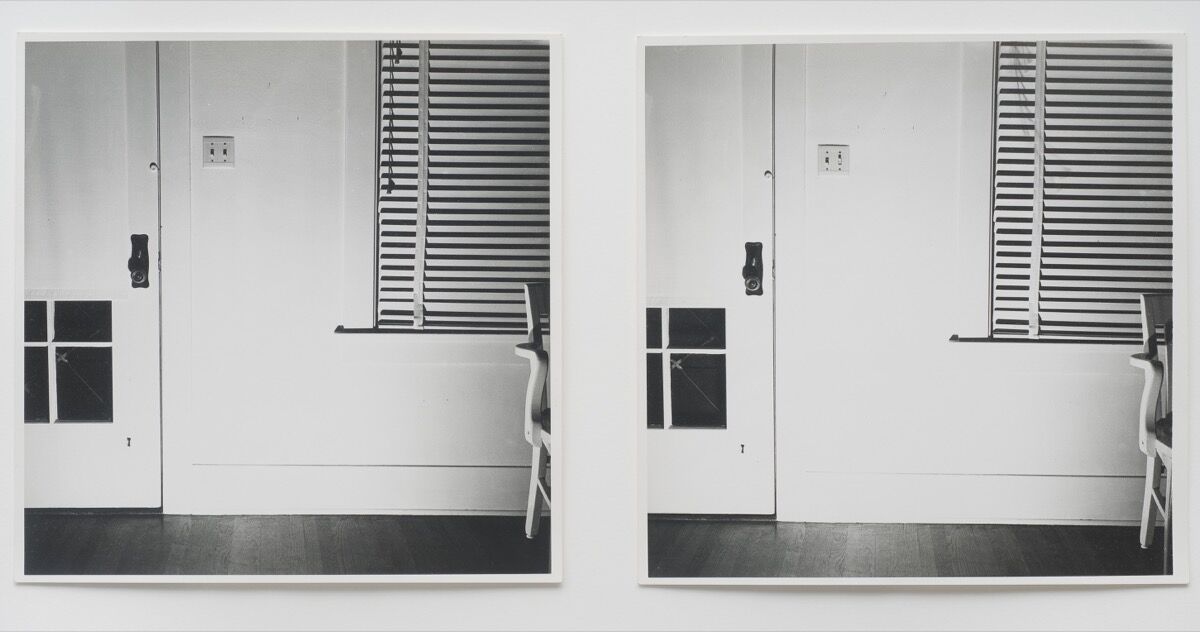 William Wegman, Light Off/Light On, 1970. © William Wegman. Courtesy of the artist and The Metropolitan Museum of Art.

Advertisement
“California Conceptualism” is how this show describes the loose ethos that aligned a number of young artists working at CalArts, at other newly minted MFA programs, and around Los Angeles. Its practitioners traded on their perceived outsider, less-than-critically-savvy statuses to produce work that aligned arid didacticism with visual jokes and wordplay. The cohort (who would come to be known as the “CalArts Mafia”) employed Conceptualism—generally defined as art that privileged theoretical premise over form—in the service of artworks that subtly undermined its stakes. Artists like
David Salle
,
James Welling
, and
Matt Mullican
highlighted the contradiction inherent in the very fact that cues identifying a work as “Conceptual” (i.e. pairing text with image) could, and did, exist.
One example on view here is Salle’s Untitled (Coffee Drinkers) (1973), which wedded seriality and preset formal “rules” with consumer culture and a film-still aesthetic. The quadriptych photo collage features four of the artist’s female acquaintances, each holding a cup and gazing thoughtfully out of a kitchen window. Superimposed on the bottom edge of each print is a different instant-coffee label. The work’s visual uniformity is undercut by the clear theatricality of its staging, which gestures toward the flattening of lived experience as depicted in advertisements, as well as each woman’s implicit melancholy.

Allen Ruppersberg
Untitled (City Limits), 1970
Phillips
The nearby Between the Scenes (1973), by
Allen Ruppersberg
, appropriates the well-worn Conceptual text/image device. Ruppersberg places typed “captions” placed beneath a series of images of himself in front of projected frames that depict the introductory credits of a film set against indeterminate background footage. Each deadpan caption purports to unpack what is going on in each still. (“Self-explanatory,” read most.)
Given Disney’s underwriting of the CalArts program and the outsized influence of the movie industry on Los Angeles, it’s not surprising that these artists would weave filmic references into their riffs on a genre of art wholly uninterested in the movies. Wegman, of course, took this conceit to its logical end, creating short videotape vignettes dictated by preset premises but incorporating—crucially—his dog Man Ray. (In one canny parody of Conceptual prescriptivism, Wegman explains to Man Ray that his spelling of “beach” is wrong. “You spelled it B-E-E-C-H… We meant beach like the sand.”) In a gesture that upsets the entire notion of art interpretation as an intellectually demanding and rigorous exercise, Wegman’s videos position Man Ray in the role of the viewer. 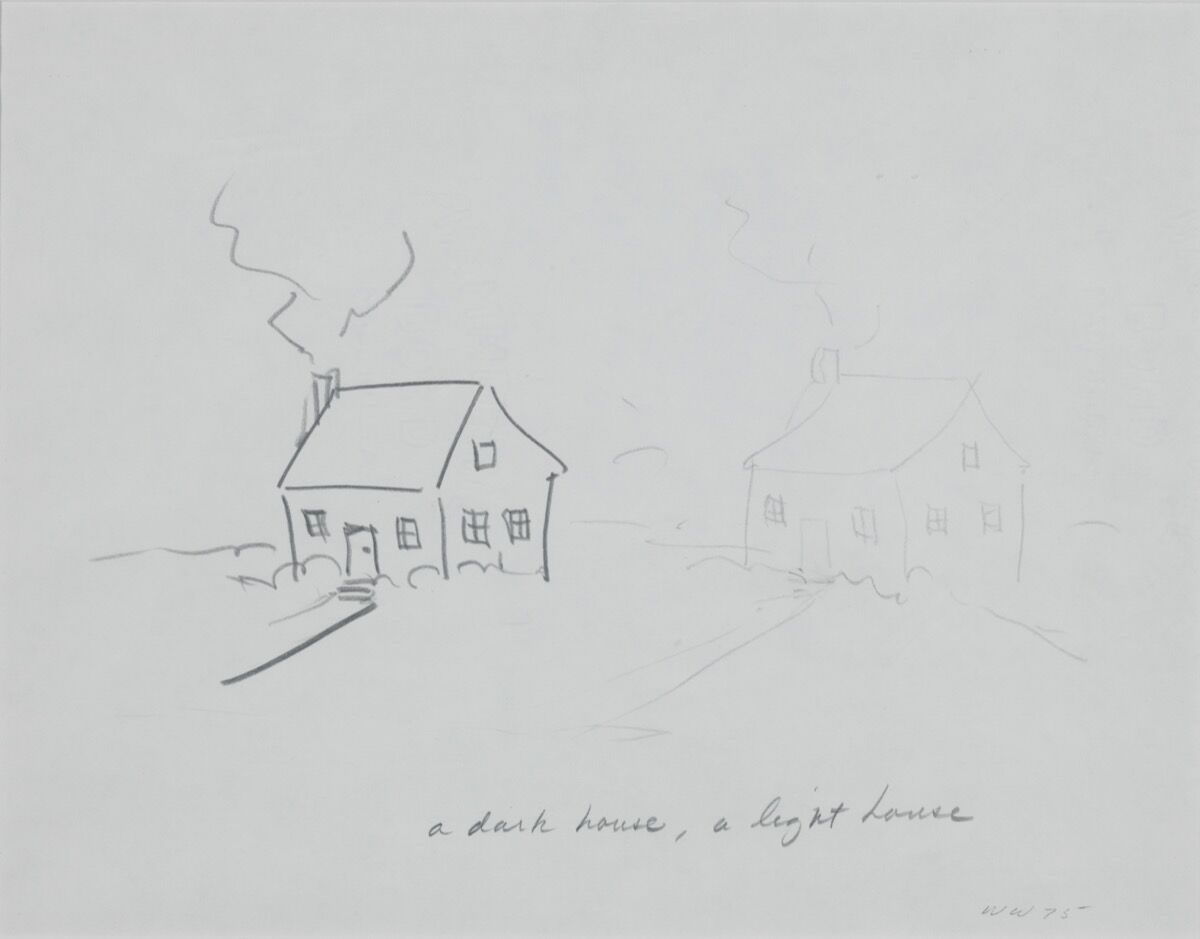 Shaken by international and domestic turmoil, the art-going public of the ’70s must have needed a reprieve as much as we do now. To paraphrase Eklund during the show’s press preview: In times of anxiety, it’s even more important to be able to laugh. While New York was initially skeptical of them, it was this band of somewhat-affiliated outsiders that pioneered the ironic appropriation tactics and preoccupation with media that would come to define the following decade, once more reshaping our understanding of art and the visual world. Wegman went one step further, uncynically but doggedly insisting on a practice in which commercial work was not a side gig, but indeed fed off and enriched unsponsored content. That decision, while sometimes derided, now feels eerily, brilliantly prescient.
At any rate, if Eklund’s exhibition indicates anything, it’s that art is best advanced in places where its modes haven’t yet calcified into dogma.
Cat Kron
Related Stories

William Wegman Is More Than His Weimaraners 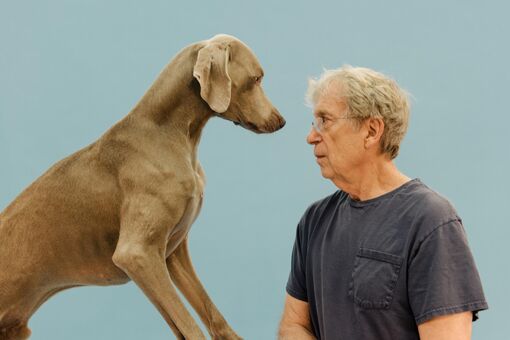 William Wegman Is More Than His Weimaraners
Artsy Editors
Oct 9, 2017